Is there life floating in the clouds of Venus? Telescope observations spy a gas high in the atmosphere of Venus that on Earth is made by microbes. BBC

Koalas still under threat in NSW despite Berejiklian’s ultimatum to Nationals. Conservationists say the creation of a Great Koala national park needs to be formed out of conversion of key state forests if the koala is to avoid extinction in NSW by 2050. The Guardian

World fails to meet a single target to stop destruction of nature – UN report. ‘Humanity at a crossroads’ after a decade in which all of the 2010 Aichi goals to protect wildlife and ecosystems have been missed. The Guardian

Net loss: the high price of salmon farming: The salmon has always been a barometer for the health of the planet. Now industrial-scale farming is bringing pollution, plagues of sea lice and threatening the future of wild salmon. The Guardian

Out early under volcanic red, the sun clarifying distance. 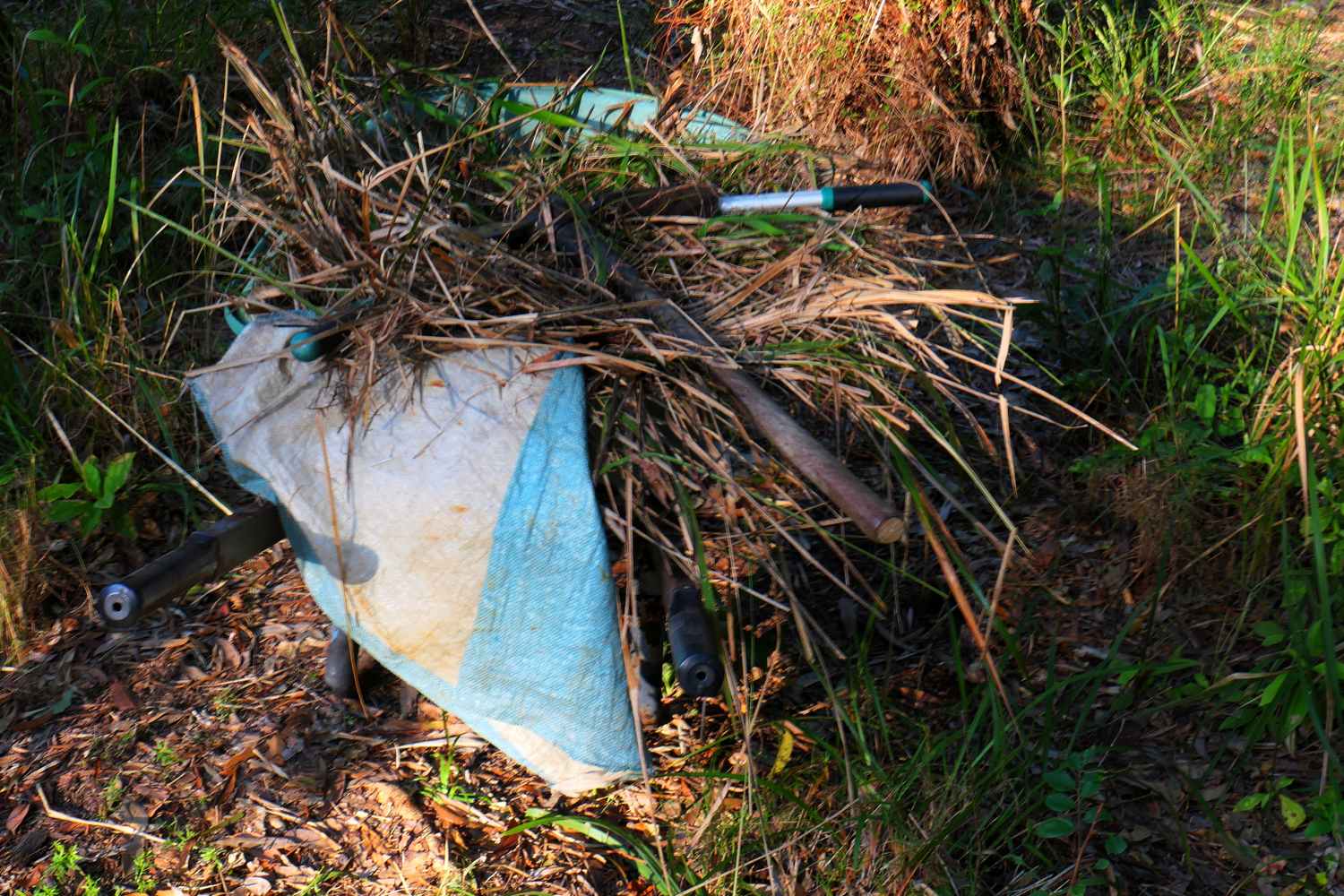 Utopias are fantasies that usually leave out manual labour, countering these are what Michel Foucault calls ‘heterotopias’, real spaces that counter utopias while paradoxically suggesting incompatible utopias in a single real place. He was interested in how our relationship to place and environments have changed. He identifies the garden as a heterotopic site, being a tiny corner of the world yet an idealised model containing a variety of habitats. Our garden is 90% native, but does have a small Asian garden.[1]

Wyn points out the Ladies Tresses littering the path, not yet flowering. I hadn’t noticed orchids when I pushed the wheelbarrow through.  I take two shots of the pigeon on the nest, not wanting to disturb her, though we had been planting close beneath.

The Finger Lime covered in flowers (one lime for the first time last year). The Kangaroo Paw is now fully out – a lovely rich velvet rouge, but when I get my camera there a wallaby has beaten me to it. I’m sweating, it’s humid but only half eight. A bee cruises the wisteria flowers like a conman checking out a room for marks.

The Dr is ringing at nine, Wyn has been for tests. She picks up immediately, I can hear her muffled voice on the floor below. It seems to be taking a while. I look around – paintings on the walls, the glass walls picturing trees and this could all change, will change. The colours will fade, dust thicken, eating will become a burden, and all this stuff, the stacks of art books, racks of CDs, boxes of minidiscs, the small sculptures collected ad hoc – all this will evaporate. Fingers stiff, lungs exhausted, heart dulled, the closest object distanced, our redolent garden blanched, future despair amplified.
~ 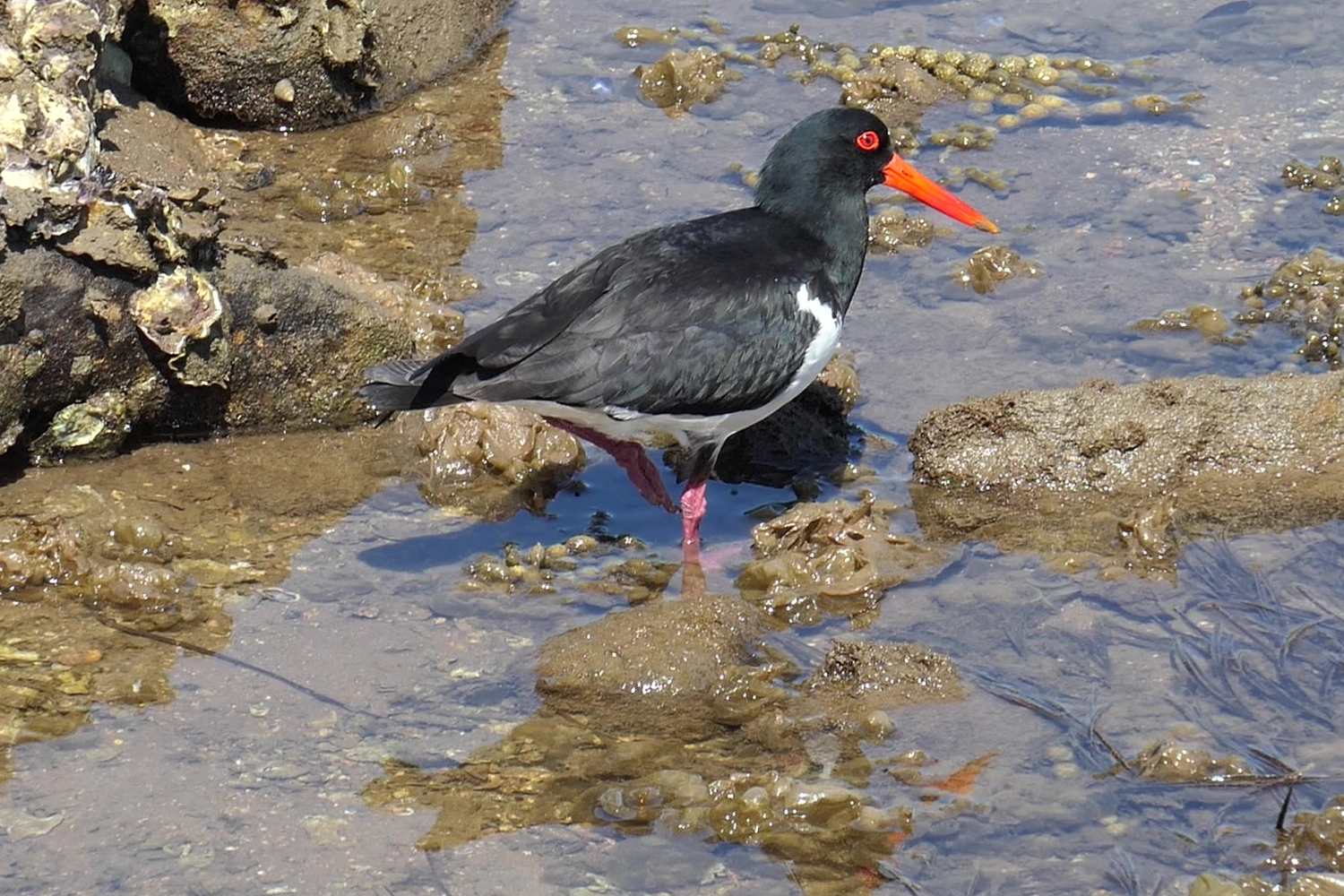 Pied OsytercatcherOn the boardwalk of the Nambucca River with my tripod filming birds. Passers-by ask me what they are! Darter, Great Egret, Pied Oystercatcher and all locals.

It’s not rocket science, embroidered knowledge, common birds but each beautiful and each with their own character. I warn a pair of women that the Ibis are no longer called Sacred, The Egyptionas got there first, or the god Thoth. That close relative guarded the country against snakes and plagues and serpents and were often mummified.

A Gumbaynggirr fisherman is casting his luck, it’s nothing like gardening, but both get close to the natural environment. Indigenous languages don’t have a word for ‘nature’ or ‘natural environment’, because the terms presume opposition between ‘nature’ and culture and society. We are living apart from natural processes, from fetching water, hunting and gathering food, finding warmth and shelter, being intimate with natural environments.

The Persian word ‘paradise’ meant a hunting park or garden ‘walled enclosure’ before referring to the Garden of Eden. George Monbiot notes, ‘The Normans were obsessed by hunting, and many of them joined the invasion of 1066 simply to secure new game reserves  . . . William I established several forests, which means a Royal hunting estate, whose inhabitants he cleared.’[2]

Gardens are now important sources of biodiversity, or can be – and should be, rather than for the fun of killing animals. Yet so many garden indulge in lawns which is a problem. For example in Florida, the use of chemical pesticides, herbicides, and fertilisers maintain a lush, green carpet during the dry season or periods of drought is a serious environmental problem. Runoff threatens fragile riverine  estuarine and marine ecosystems.[3]

Michael Pollan writes, ‘My conviction is that gardening, as a cultural activity, matters deeply, not only to the look of our landscape, but also to the wisdom of our thinking about the environment . . . Gardening tutors us in nature’s ways, fostering an ethic of respect for the land. Gardens instruct us in the particularities of place. Gardens also teach the necessary, if still rather un-American, lesson that nature and culture can be reconciled, that it is possible to find some middle ground between the wilderness and the lawn—a third way into the landscape.’[4]

See my POST on gardens as important for biodiversity.

[1] Michel Foucault, ‘Of Other Spaces’ (1967, a lecture architectural students).  In M. Dehaene & L. De Cauter (Eds.), Heterotopia and the city: Public space in a postcivil society , Routledge, 2008. Brothels and colonies are examples of heterotopia.