Venus waits for us sharp and bright above a dark blue mattress topped by a few brushstrokes of ochre, and a hernia of white cloud. Wyn calls up, the moon is setting. I find the celestial tangled in the trees.

Every morning for the last few days the loudest call is the downward whistle of a Brush Cuckoo, still haven’t caught sight of it yet, hopefully next year. 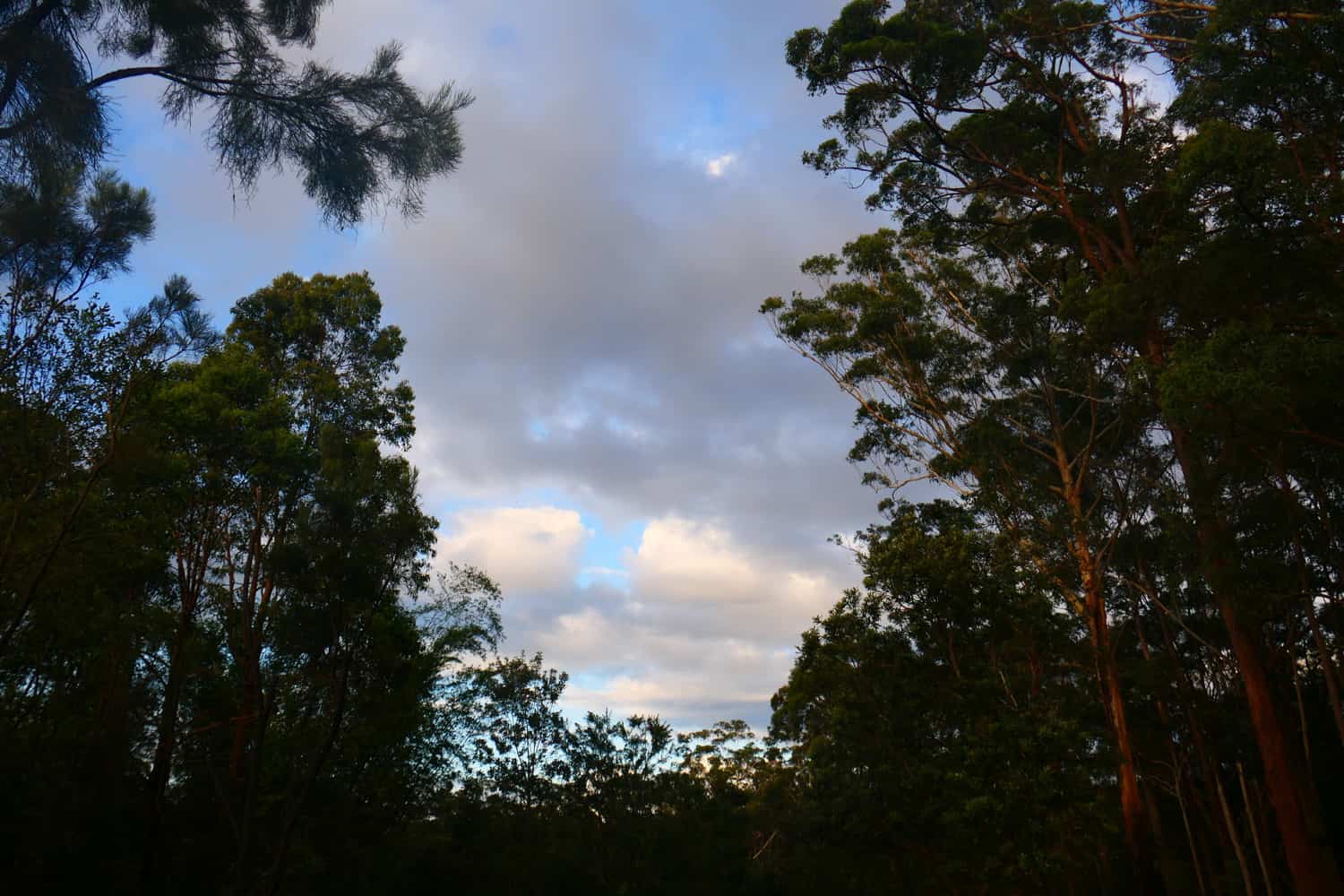 Leaving the village, I recognise a walk, lean a little closer to the windscreen, the cap and sunglasses make recognition tricky, then I realise Mel is dead, died over a year ago.
So many more I know have abandoned this planet and it’s not even COVID, more my age. Babies may be replenishing the stock but I don’t know their names or where they reside in the network of relationships I know. 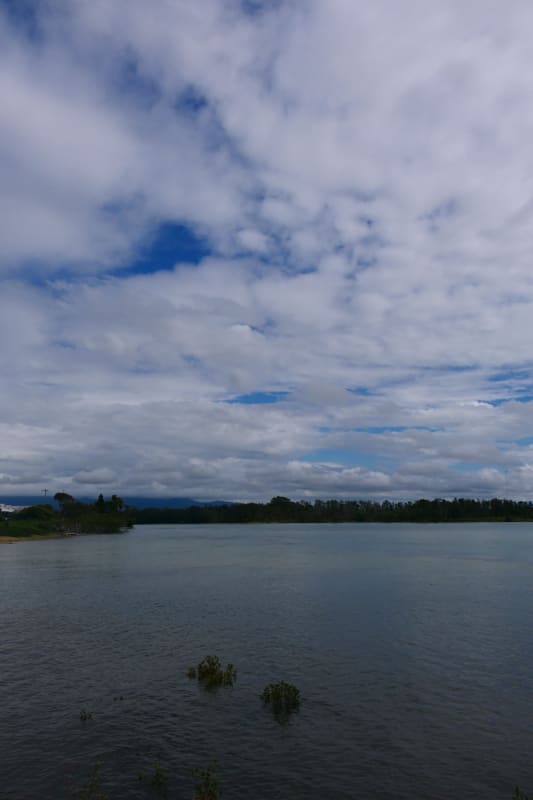 The tide is the highest I have seen at Urunga, where two rivers resolve, sparkling in the shallow crease of the spit logs from the pre-Christmas floods are floating back on the tide to where they came from past the fishing boats, full moon tide swings splashes onto the bank, the mangroves are swimming, flexing. Two Peewees sit on a stump in the water. 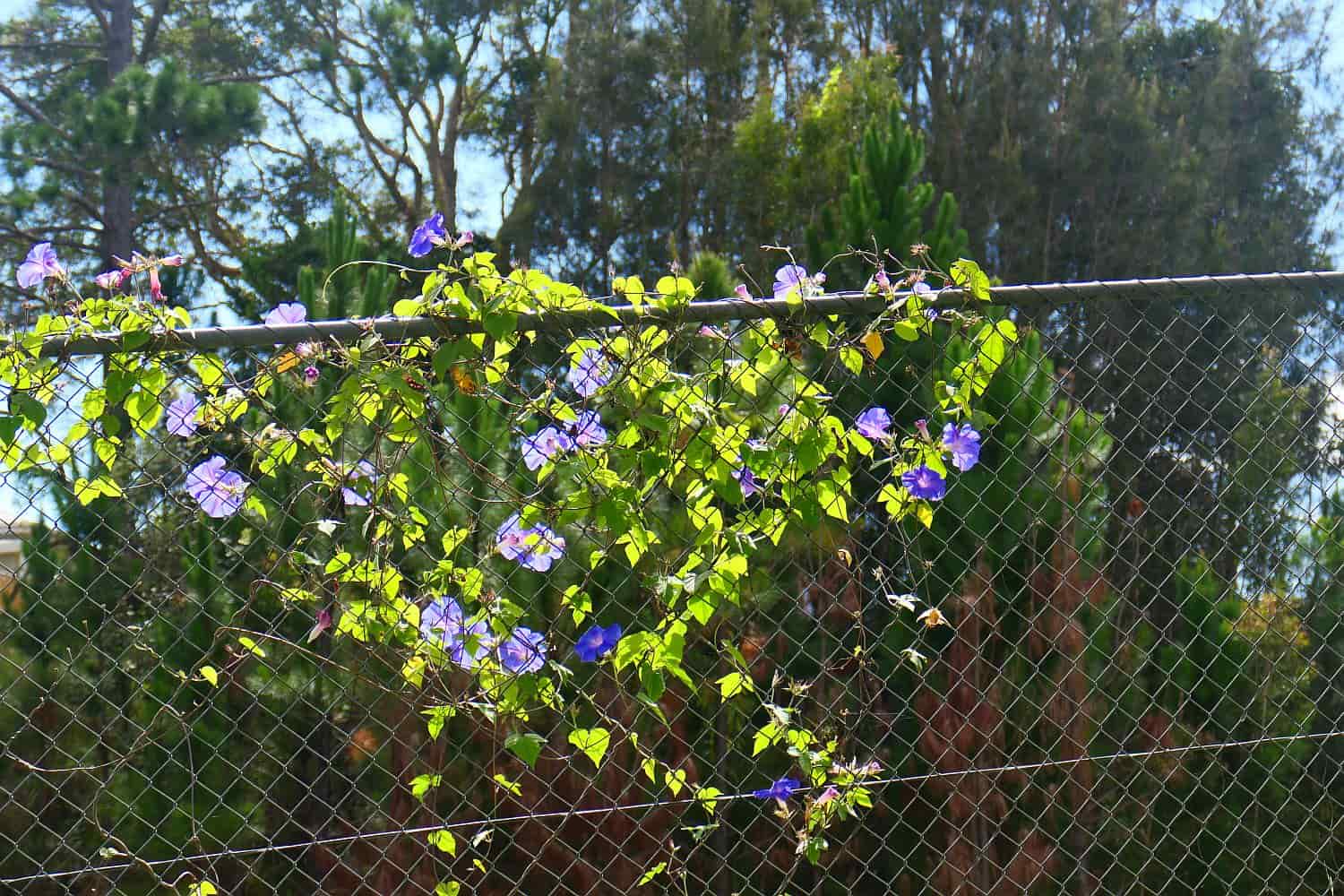 I have an appointment, park by the railway. A vine is climbing the chain link fence, sunlight probing the flowers. One is in full blooming heavenly blue, a beautiful weed in the Convolvulaceae family, colours optimised to attract pollinators: bees (blue), hummingbirds (red), moths (white). 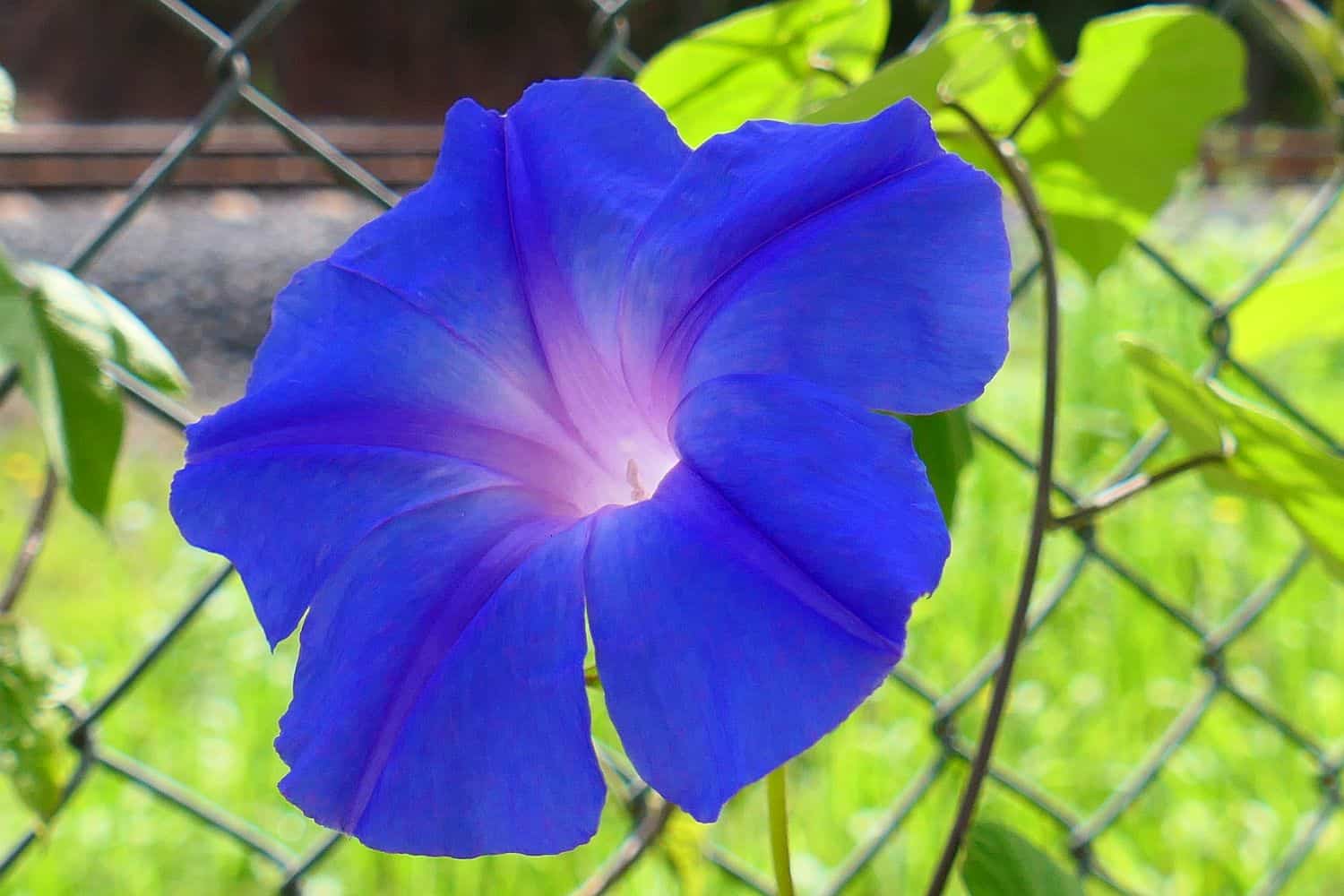 That we find a crystal or a poppy beautiful means that we are less alone, that we are more deeply inserted into existence than the course of a single life would lead us to believe . . . For an instant, the energy of one’s perception becomes inseparable from the energy of the creation. The aesthetic emotion we feel before a man-made object . . . is a derivative of the emotion we feel before nature. John Berger [i]

When we were teens we ate the seeds to get high, but never enough.

‘Chemically, Morning Glory flower seeds contain rather high levels of Lysergic acid amide (LSA), an alkaloid that’s chemically similar to LSD. To obtain the effects of these and other hallucinogenic seeds, most people eat Morning Glory seeds or grind them up and add them to drinks.

People who abuse Morning Glory seeds in this way nearly always leave behind some telltale signs that alert observant parents and caregivers. The evidence includes: Type of Seed: Not all Hallucinogenic seeds are created equally. Some types of seeds, such as Heavenly Blue, provide more of a high than some other classifications. Amount of Seed: Since each seed only contains a tiny bit of LSA, the people who abuse them will buy lots and lots of seeds. Between 300 and 400 seeds usually generates the desired effect for teens.’[ii]

~
The Doctor prods me. Yes, I have an umbilical hernia. No, surgeons won’t repair it unless it causes problems. I give him a photograph of my Tree of the Week, as a Xmas card. He seems pleased, props it up against his computer.

I catch David putting the finishing touches to his mural, it has taken over my life, he says. {See here for the mural and an image of the two rivers meeting at Urunga}.

The year coming to a close with shiny Lorikeets screeching overhead.

A Red Cross parcel arrives from Armin in Belgium, with my godson’s art with Bruges beer (a new brewery) and chocolate, Jacques and Côte d’Or treasures. Côte d’Or was founded in 1870 by Charles Neuhaus in Schaerbeek, Belgium. Côte d’Or refer to Ghana’s colonial name, being the source of much of the cacao bean supply. And I was giving it up. 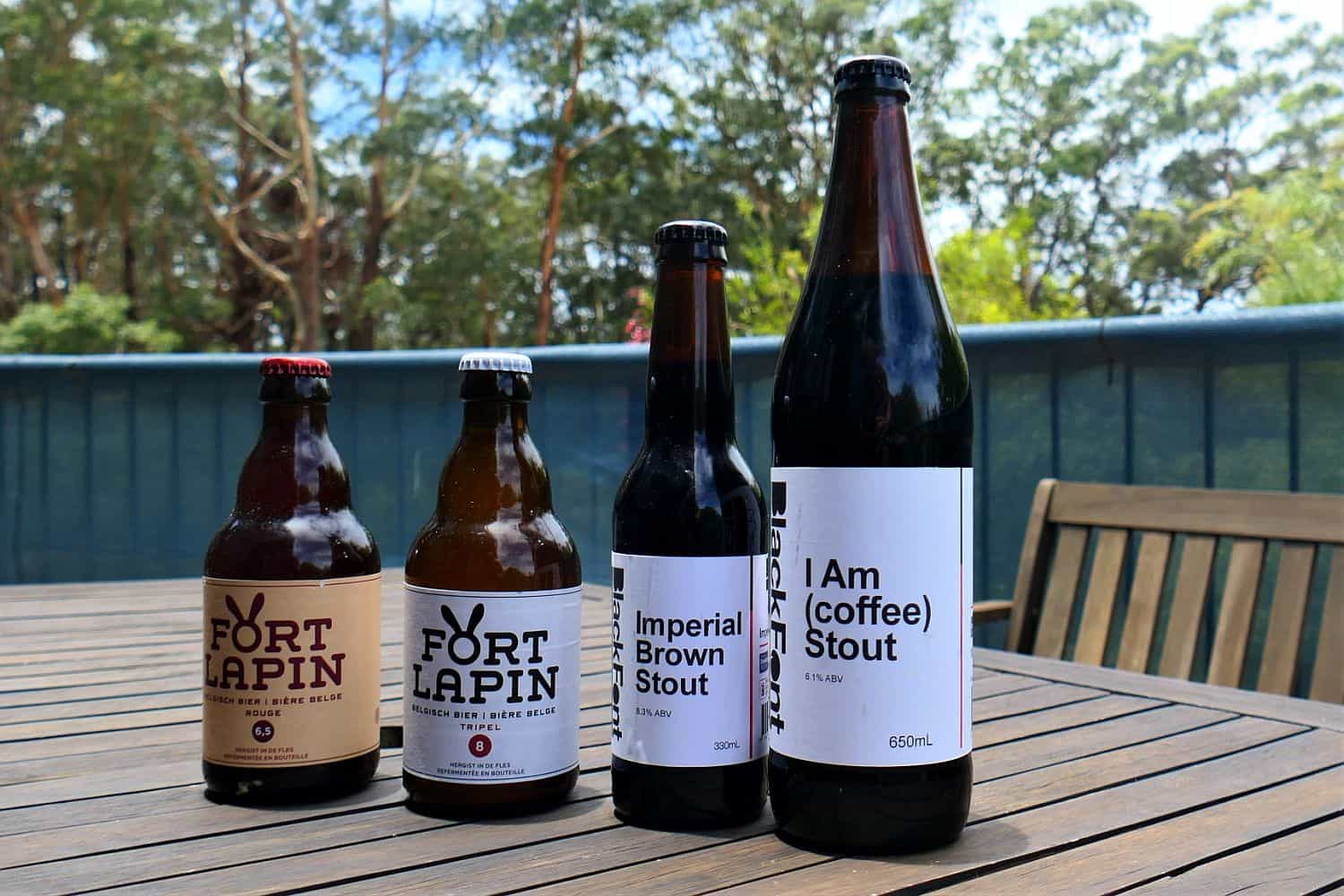 Andrew has brought beers from a microbrewery next to his factory, small batches that get sold immediately.

A high-pitched cicada choir surrounds us. I investigate the garden, look for their shells on the tree trunks, not one but find an empty egg case, species unknown and the last Grumichama of the season – delicious. 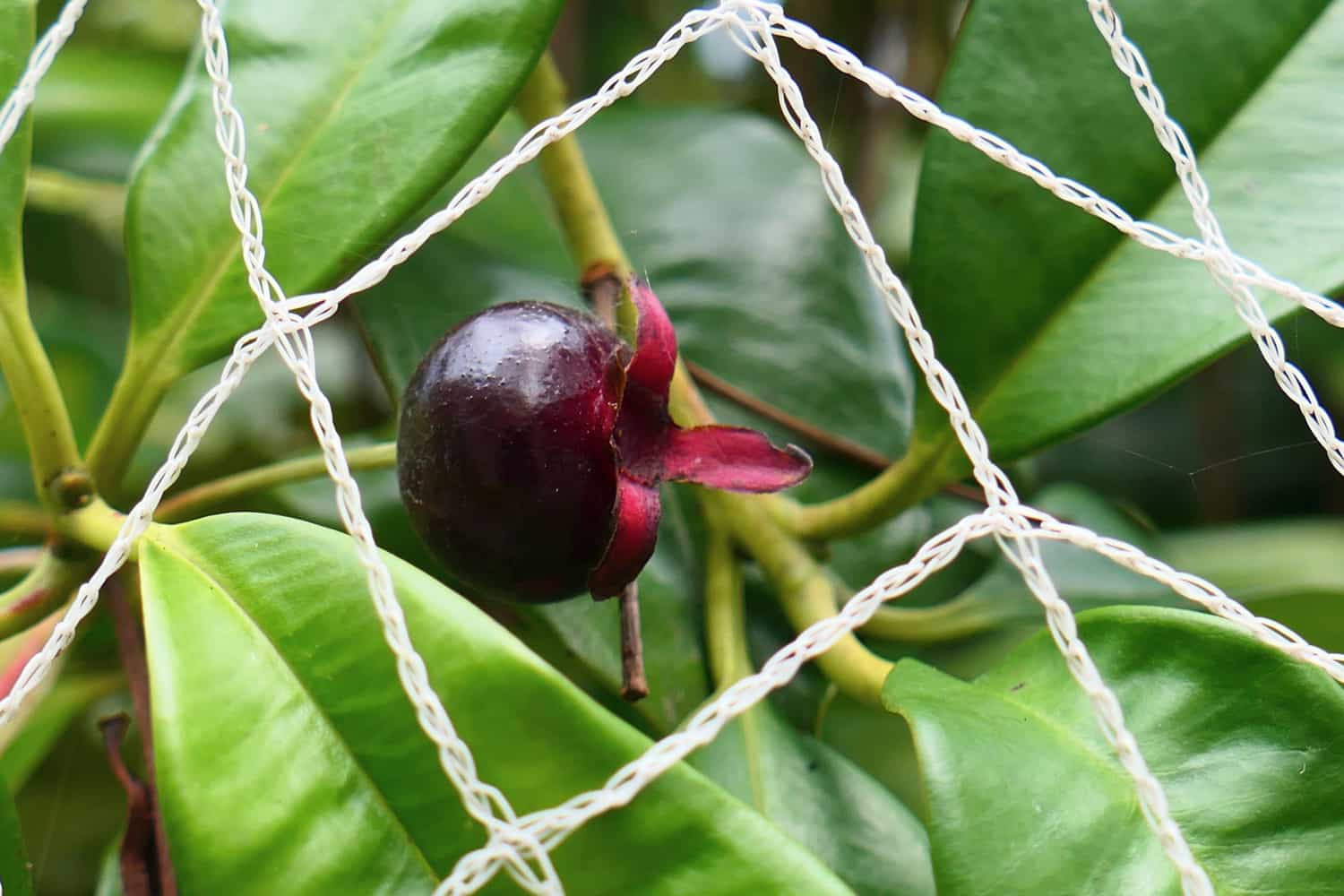 We have declined the parties and enjoy a quiet end to a full-on year, belly-laughing to outtakes from Have I got News For You. You have to have a laugh.

‘There are many people deserving of praise for selfless acts during the past 12 months. But one person whose act of scientific generosity ought to be remembered is Zhang Yongzhen. The scientist, who works out of the Shanghai Public Health Clinical Centre, was the first to map the whole genome sequence of Sars-CoV-2. He did so on 5 January 2020 and hoped to share it with researchers by uploading his work to the US National Center for Biotechnology Information (NCBI).

The professor knew he was dealing with a deadly virus – but he had no idea how dangerous. The pathogen has killed more than 1.7 million people and shut down nations, leaving a trail of economic disruption. Concerned that the NCBI would take its time, the scientist sanctioned the sequence’s global public release via an Australian colleague. On 11 January, when Wuhan recorded its first Covid death, the virus’s genomic sequence was posted on an open access site.

The 28,000 letters of Covid’s genetic code allowed Oxford University’s Jenner Institute, Moderna and BioNTech to design their vaccines in days. Testing took the rest of the year. To go from an unknown lethal new virus to an approved vaccine in months is a medical miracle.’ Guardian editorial, 31.12.2020

‘On 31 December 2019, the WHO China Country Office was informed of cases of pneumonia of unknown etiology (unknown cause) detected in Wuhan City, Hubei Province of China. As of 3 January 2020, a total of 44 patients with pneumonia of unknown etiology have been reported to WHO by the national authorities in China. Of the 44 cases reported, 11 are severely ill, while the remaining 33 patients are in stable condition. According to media reports, the concerned market in Wuhan was closed on 1 January 2020 for environmental sanitation and disinfection.’ WHO[iii]