Polluted air killing half a million babies a year across globe. The Guardian

Coffs woman pepper-sprayed after launching attack on officer. CRIME “The situation got slightly out of hand,” she told the court. Coffs Coast Advocate

No news isn’t necessarily good news. News is powerful, and helps us to stay connected and informed. But it’s important we regulate our news consumption – particularly during times of crisis. The Conversation

Overshoot – the messenger. The pandemic itself is a powerful, daily reminder and with an extremely high cost of life showing how nature and human species are interdependent. The Ecologist 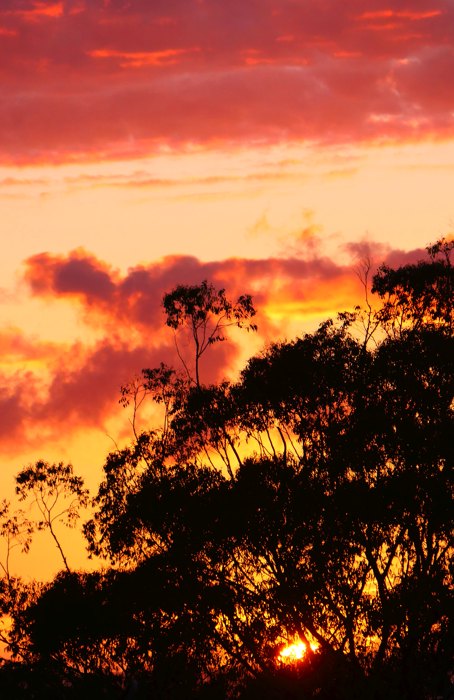 Waking to exoticism, once a foreign music of Whip birds,
Figbirds, a Channel-billed Cuckoo, Lewin’s Honeyeater,
exotic even without a kookaburra and the Lorikeets
are still snoozing and no sign of the King Parrots.
I’m not sure where the Koels have got to. 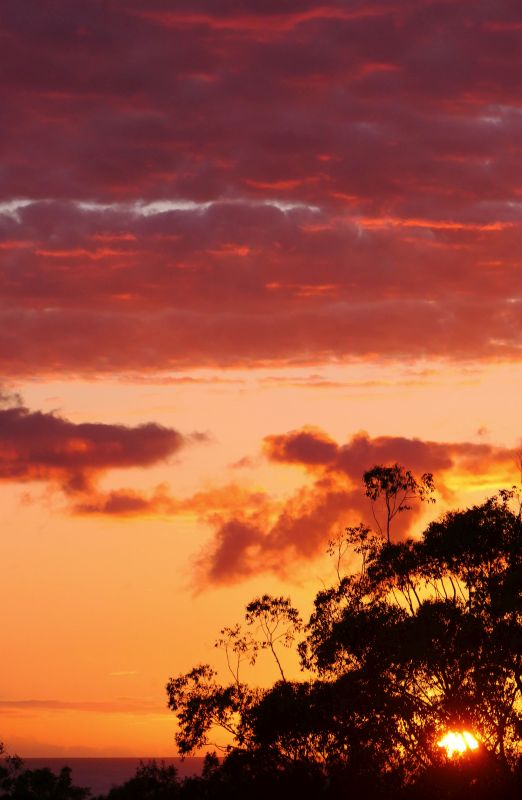 I arrived on this island in my mid-twenties,
accustomed to Robins, Blackbirds, Tits and Thrushes
and the mechanical Chiff Chaff.

I interrupt the news to photograph sunrise and then
the blue, blue sky carefully arranged with white clouds<
Black Cockatoos scudding across. 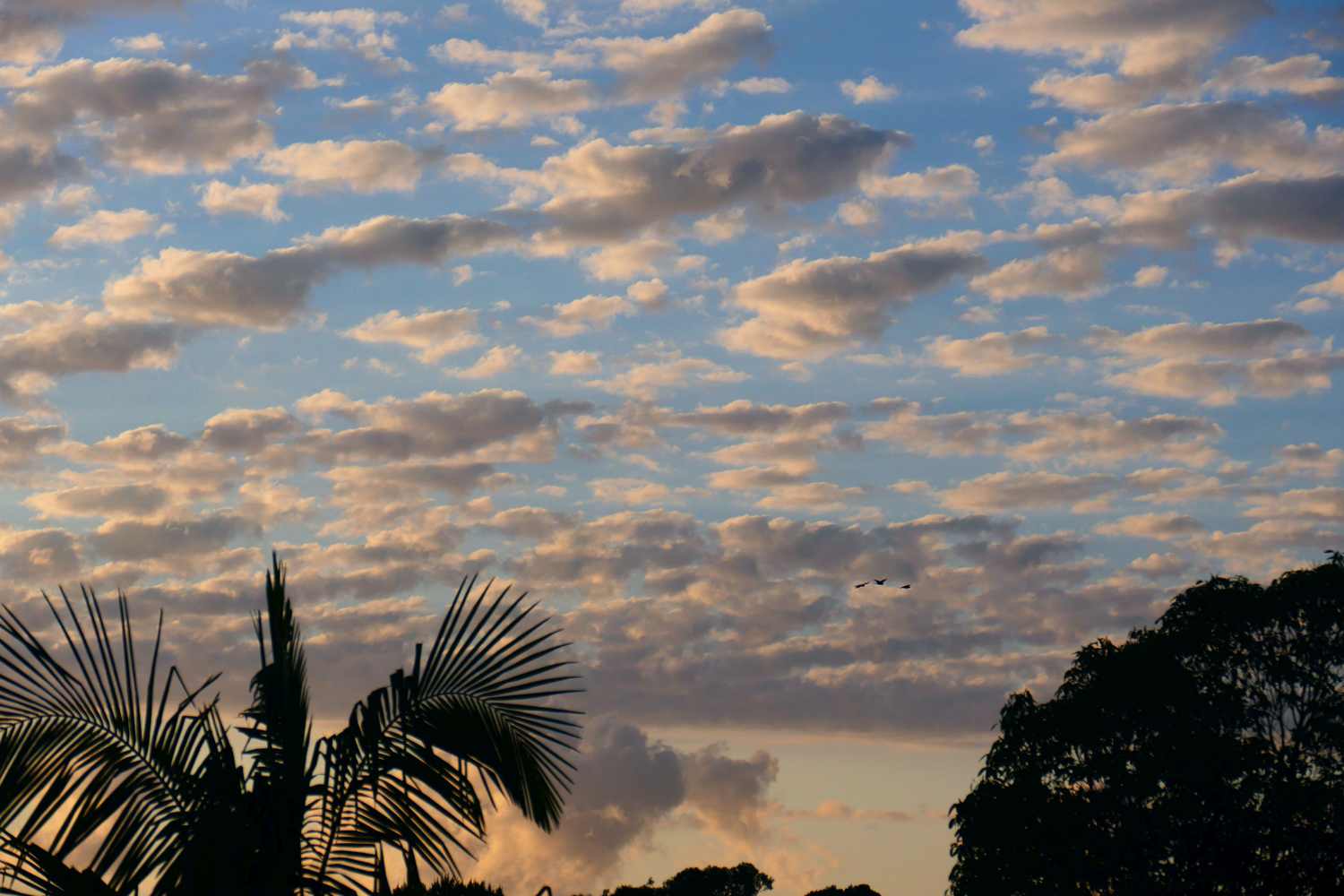 Wyn is doing the crossword.
Did you call threepenny coins bits? I did, and I’m so old
I even vaguely remember fucking farthings.
She laughs, says I swear too much, heads downstairs saying,

Oh it’s a Simpson sky, and I think of a girlfriend at university,
she had a poster – Maxwell. . .? I look up, ‘painter, clouds, Maxwell’,
found him at ‘atlas of places, make-believe-landscapes’, a saturated

painter blanked for over forty years, Maxfield Parrish. Of a dozen images
not one records this blue sky dabbed with white clouds I remember.
‘His painting Daybreak (1922) the 20th C’s most popular art print’.

The sun is rising, the rain has gone and I’m starting to read Sasha Sagan (daughter of Carl). I have been thinking about the contingency of existence of my existence in particular for a while.

Right now we think there have been approximately 7,500 generations of Homo sapiens. They all had to find each other in that perfect moment. There are so many forks in the road that within ten or fifteen generations the odds become mind-boggling.’ Sasha Sagan[3]

Part of the title of Sagan’s book is The Rituals for Finding Meaning in Our Unlikely World. Sagan emphasises the importance of ritual, of old rituals and more importantly, as a secular Jew, new ones. We need to connect, both the to the past and the present connecting families and communities. One example is her organising monthly get togethers of like-minded female friends, the ‘Ladies Dining Society’, that unravelled when many of the original members left New York. Community these days is temporary, shifting,

Here, I part ways, having being educated in a monastic boarding school and an altar boy forced to mass every day – not just Sundays – I distrust rituals. Too often they become ossified, lose relevance and their meanings are stuck on the past. They seem to be nearly always oppressive for some group or individual.

Wyn points out a Miner’s nest in the Brush Box out the front. The foliage is rich,
dense; I think I see a nest, a slip of brown twigs, or imagine it. On the driveway
she says she can see the tail of the Bowerbird on the nest that looks much too small,
in the thick of a Tallowwood, I disfigured years ago in an attempt to stem the Dodder.
I know there is one there because the bird flies out sporadically, heads towards
a birdbath then disappears. All I can see is the mess of leaves and tendrils shivering
as she shifts her weight. It’s a sign of a good garden, birds’ nests blessing the trees.

I drive her to the airport, a small man in a high vis vest and deep Yorkshire accent says I can’t park there. I nearly forget to kiss Wyn goodbye. Race to see Jason for my eye test, good news my cataracts have not got any worse. He’s Korean, we have lost of banter, I walk out with him, he’s off for lunch. I ask if he’s going to Ootoya, the Japanese restaurant with a Korean chef, just opposite. He laughs, No Subway. I warn him that their rolls are not bread according to Irish law, to much sugar. I forget to ask for his real name. I pass What Women Want and see Sally behind the counter with a magnifier headband, so pop in. It’s her birthday!

Back to Coff Creek and the site of my two still life projects, the trolley and the vine. 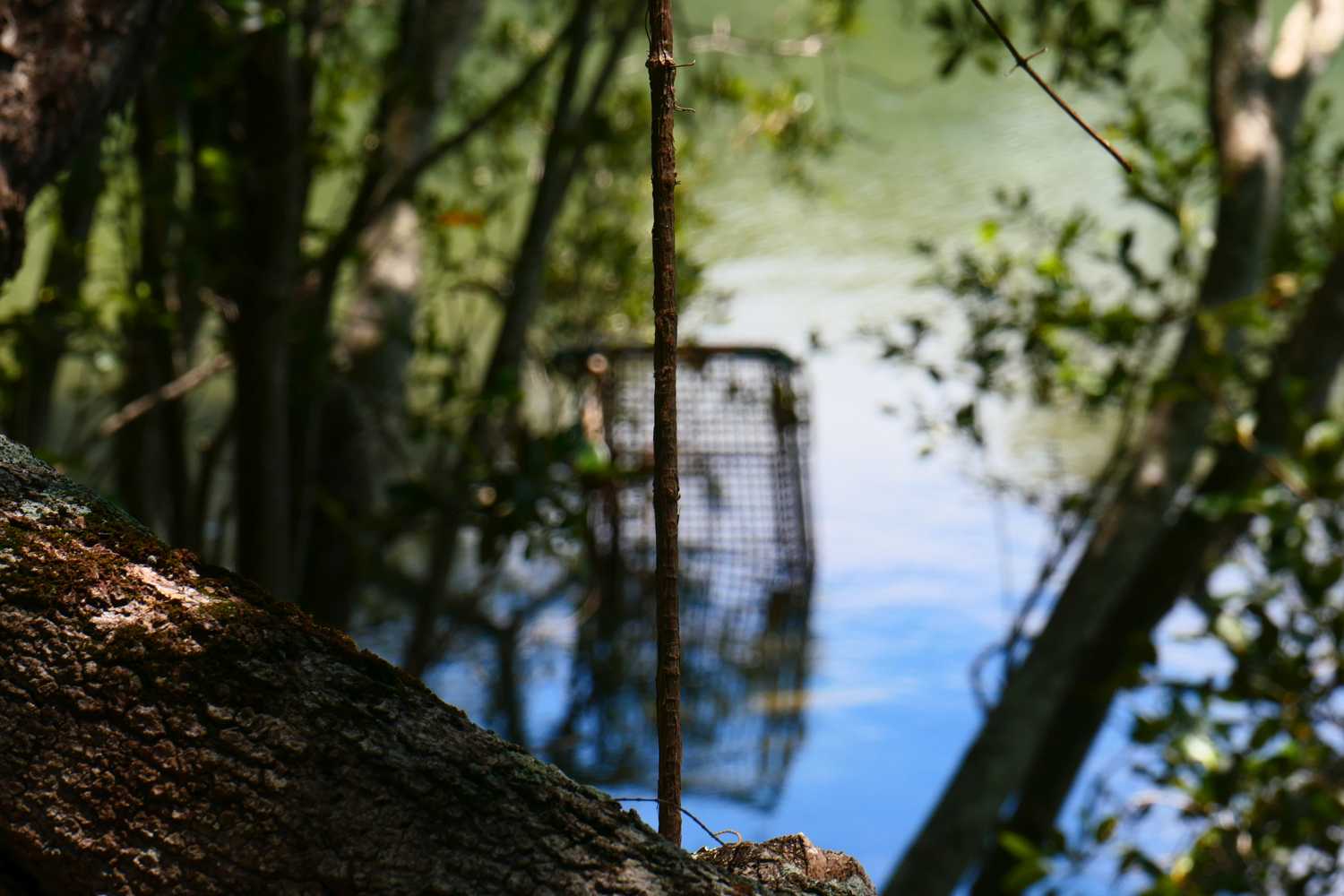 I park in the shade, walk along the creek scavenging the threshold of Creek, the Mangrove scraw, the twisted vines, the stray reflections, hear the skitter of a dragon. An Azure Kingfisher flies in and bobs up and down with a large fish, in no hurry to try and get it down. 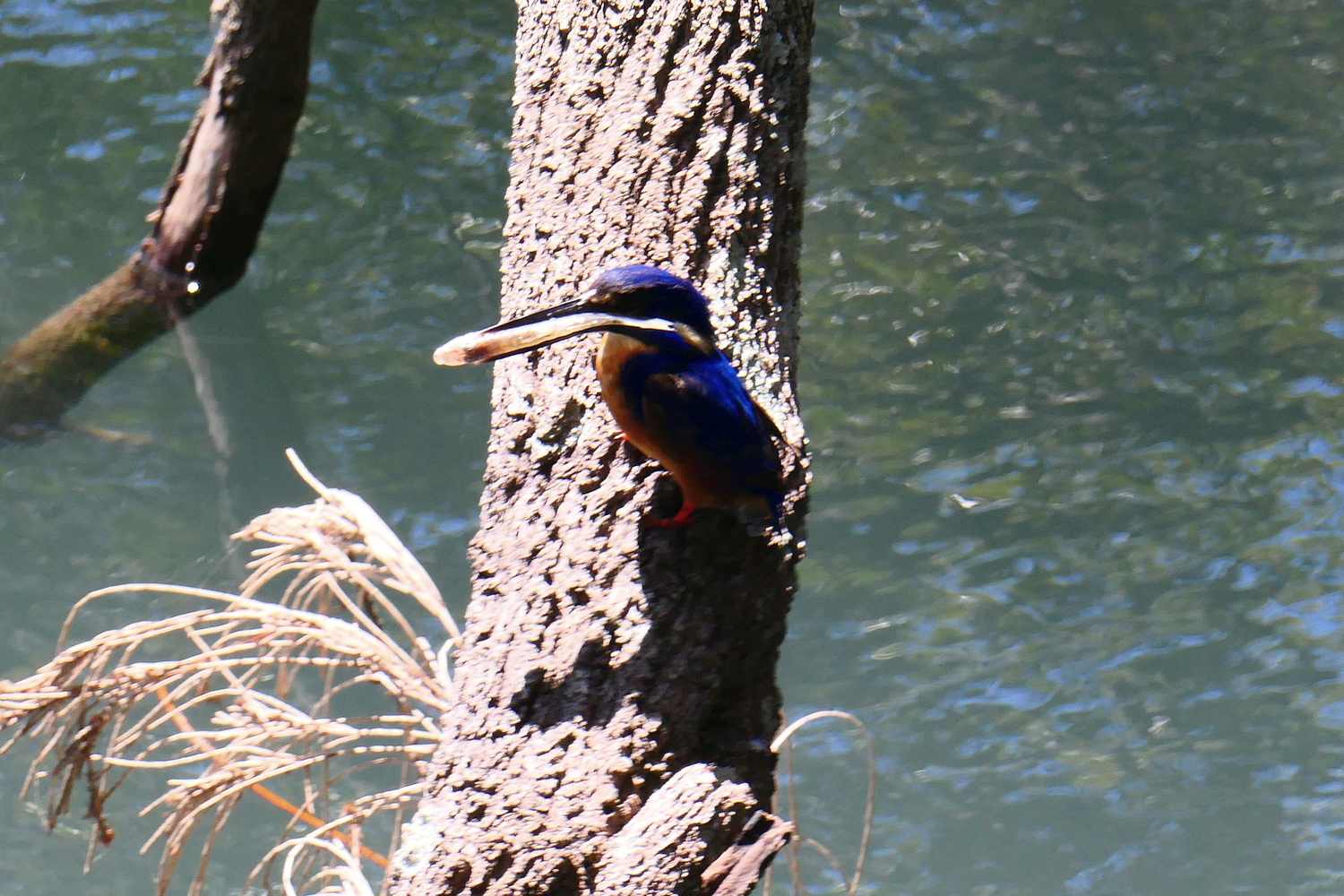 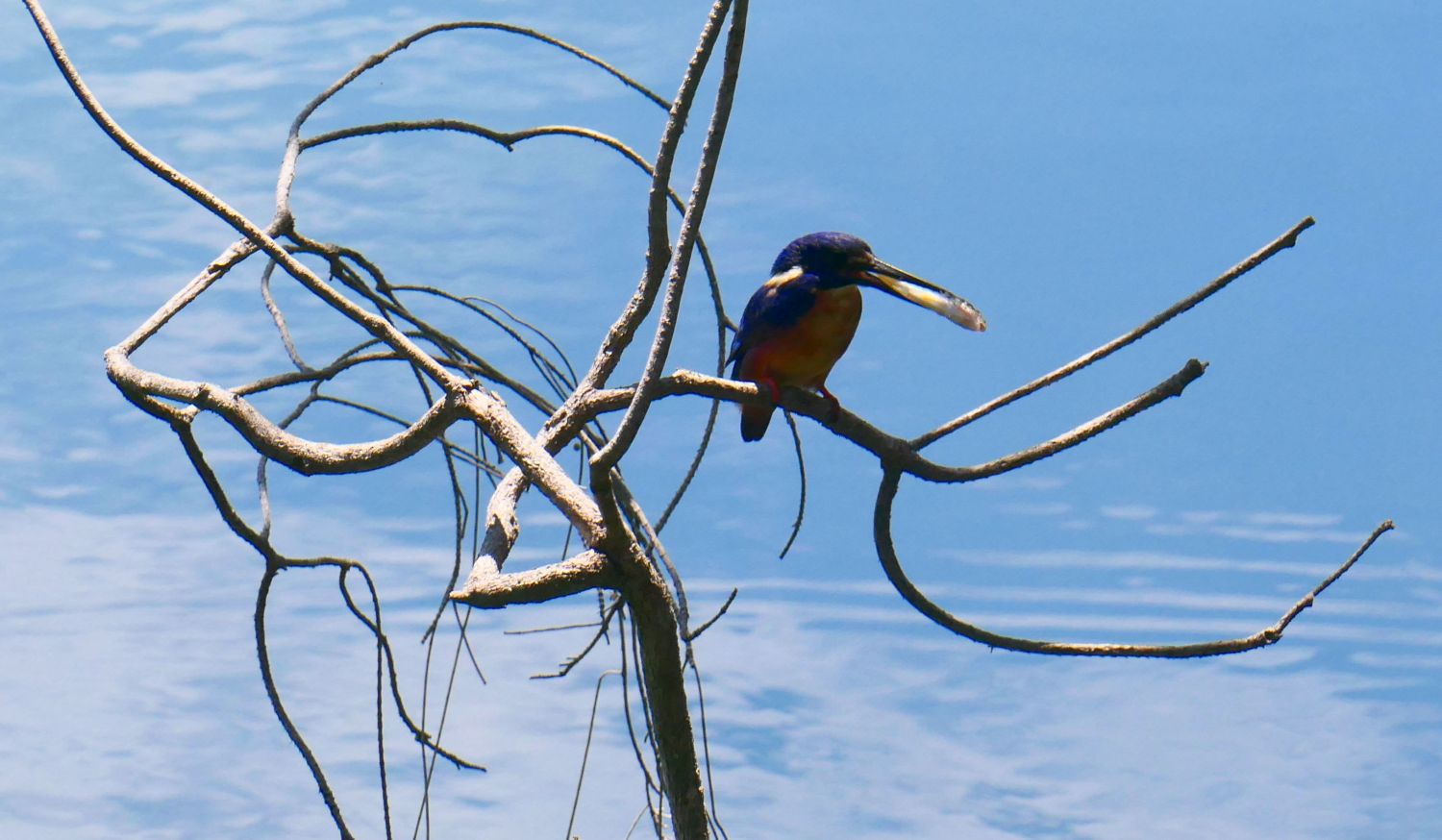 Find the trolley at high tide furnished with a beaut reflection of squiggles, like an ECG readout gone mad. Water cannot keep still. 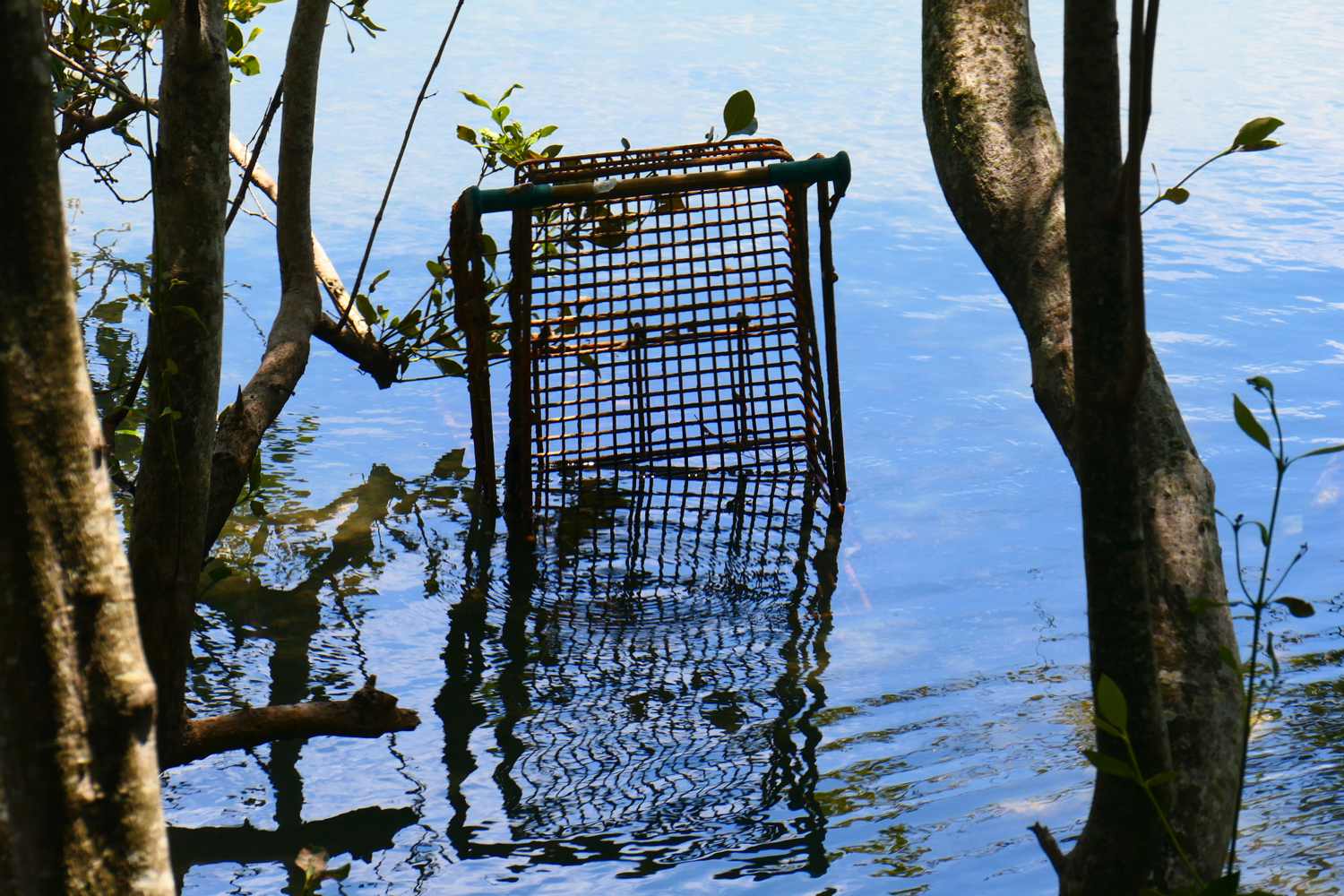 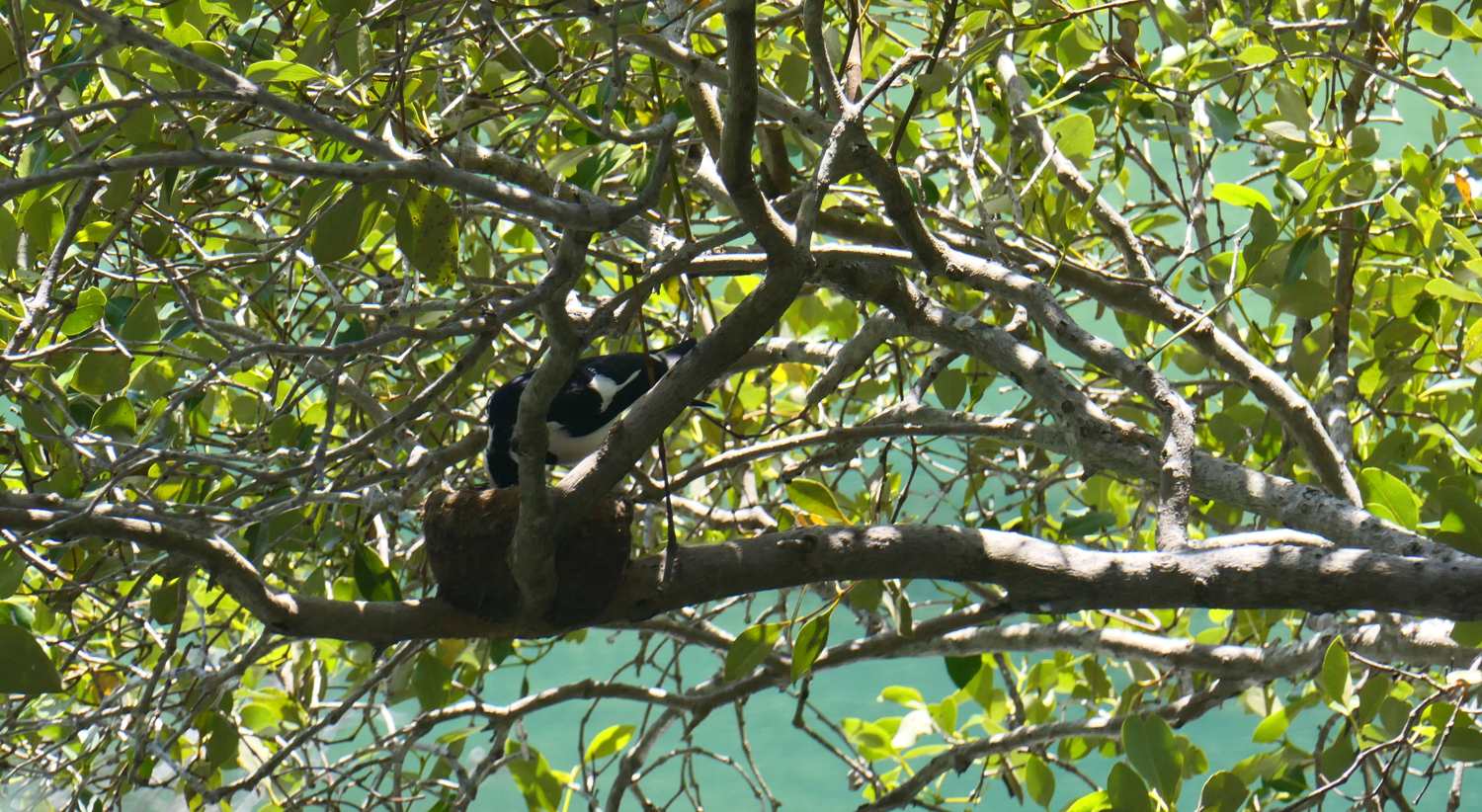 I have left my tripod in the beauty, press the camera against a trunk and film. Then a few metres away to the vine, but change tactics. Peewee on the nest still. 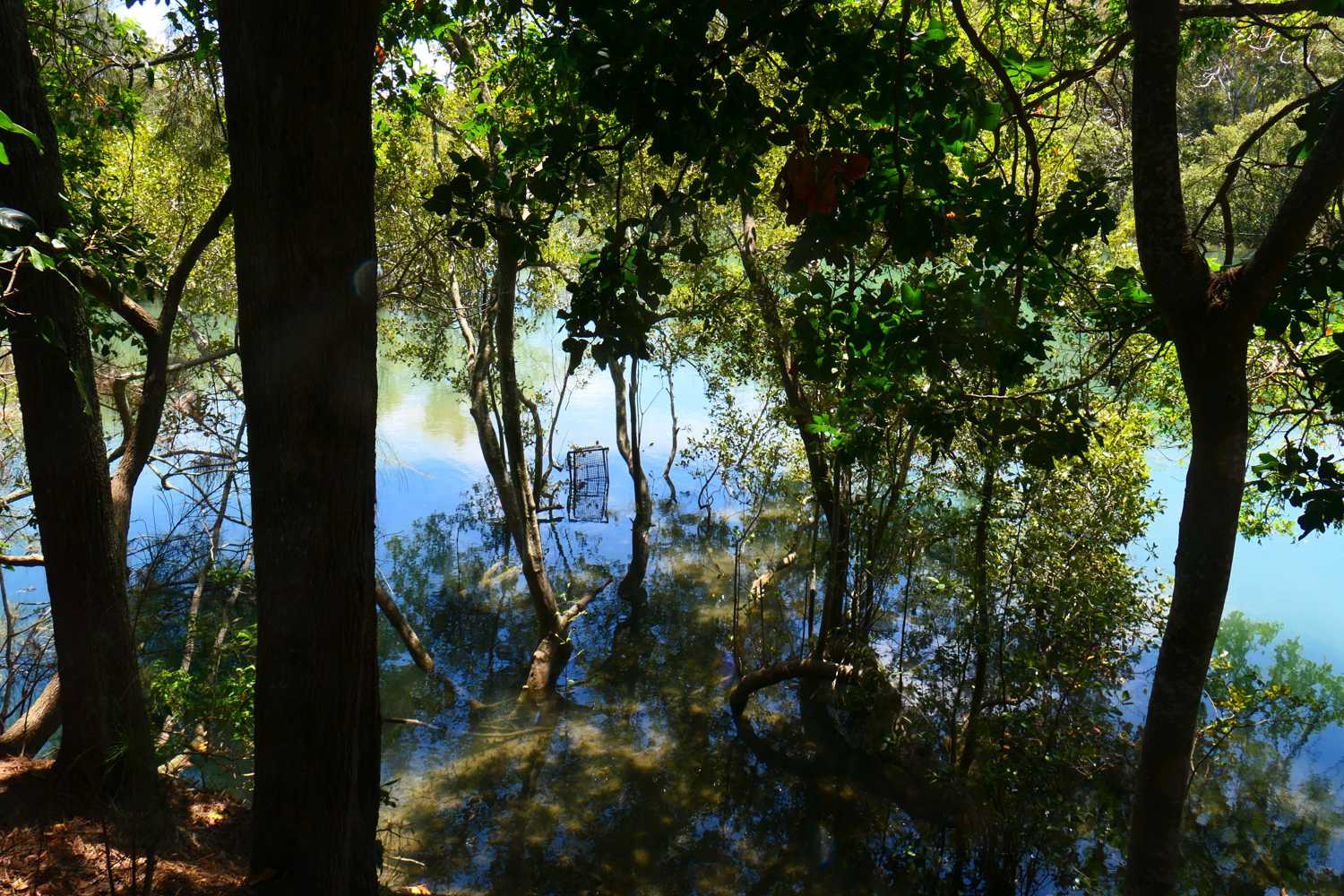 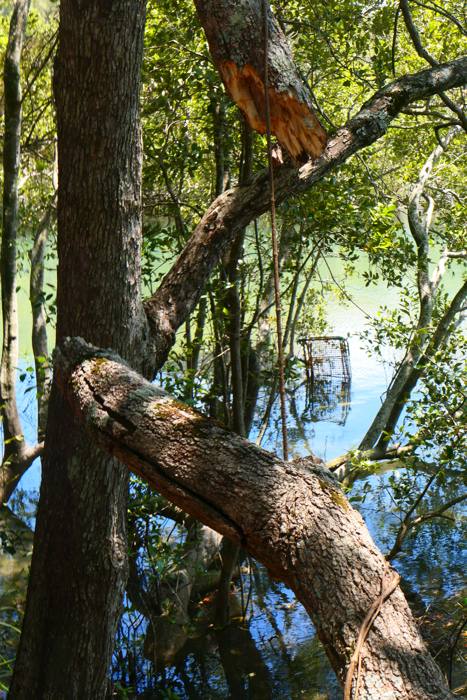 Then it’s off to see David, a physio I last saw three years ago. He works on my shoulder, I want to be able to serve again. Why is my health lacking in importance to me, it’s ridiculous.

I stop off at Sawtell Lookout on my way home. 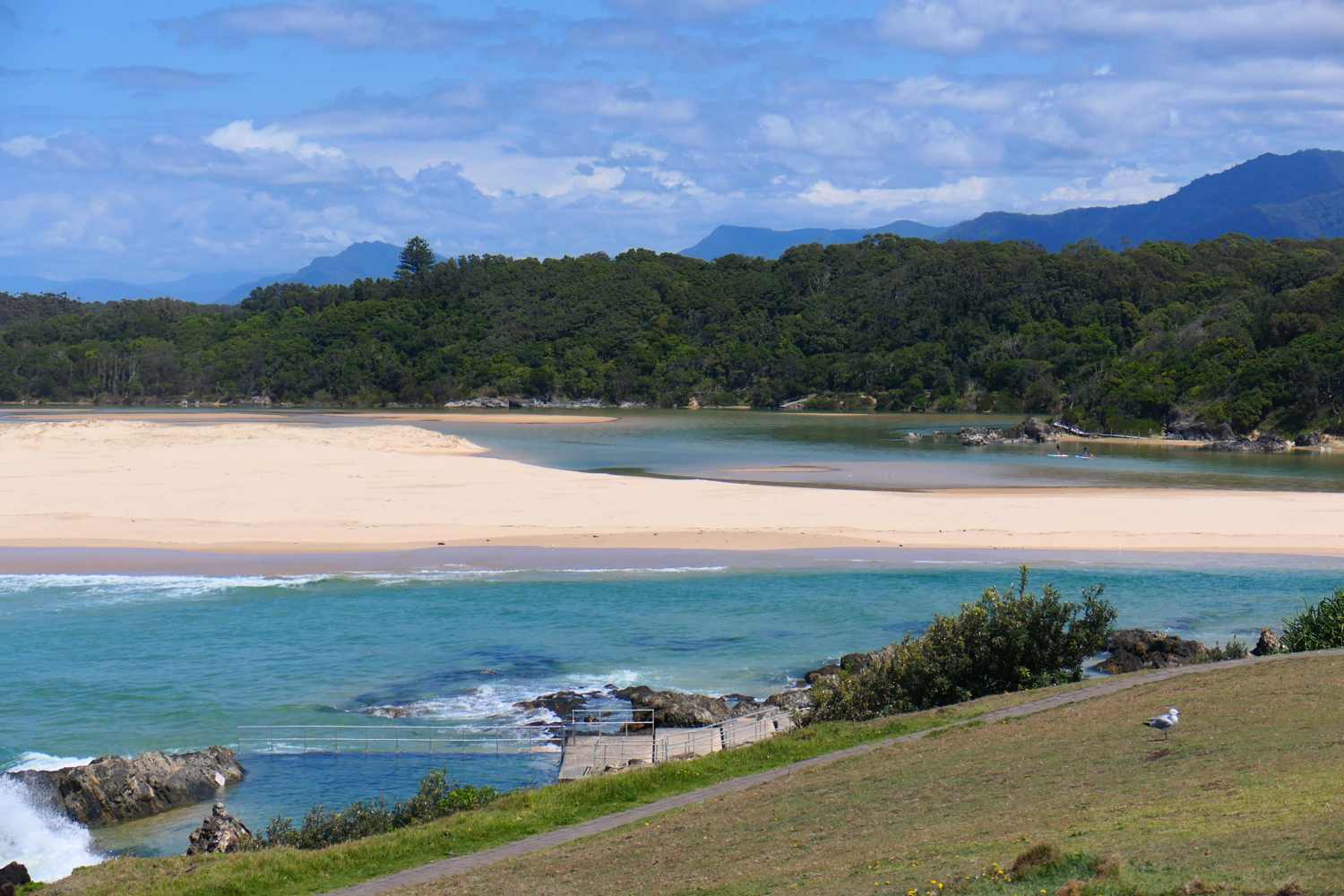 The anthropologist Clifford Geertz came upon a young boy’s funeral while doing field work in Java. He described it as a ritual ‘which failed to function properly’. ‘In fact, much of recent Javanese social change is perhaps most aptly characterized as a shift from a situation in which the primary integrative ties between individuals (or between families) are phrased in terms of geographical proximity to one in which they are phrased in terms of ideological like-mindedness . . . It seemed as if the ritual were tearing the society apart rather than integrating it, were disorganizing personalities rather than healing them . . .

People are pressed into an intimacy they would as soon avoid; where the incongruity between the social assumptions of the ritual (‘we are all culturally homogeneous peasants together’) and what is in fact the case (‘we are several different kinds of people who must perforce live together despite our serious value disagreements’) leads to a deep uneasiness of which Paidjan’s funeral was but an extreme example.’[4]

Geertz goes on to argue, ‘We cannot attribute the failure of the ritual to secularisation, to a growth in scepticism, or to a disinterest in the traditional ‘saving beliefs,’ any more than we can attribute it to anomie. We must rather, I think, ascribe it to a discontinuity . . . which leads not to social and cultural disintegration, but to social and cultural conflict . . . the difficulty lies in the fact that socially kampong people are urbanites, while culturally they are still folk.’

‘The driving forces in social change can be clearly formulated only by a more dynamic form of functionalist theory, one which takes into account the fact that man’s need to live in a world to which he can attribute some significance, whose essential import he feels he can grasp, often diverges from his concurrent need to maintain a functioning social organism. A diffuse concept of culture as “learned behaviour,” a static view of social structure as an equilibrated pattern of interaction, and a stated or unstated assumption that the two must somehow (save in “disorganized” situations) be simple mirror images of one another, is rather too primitive a conceptual apparatus with which to attack such problems as those raised by Paidjan’s unfortunate but instructive funeral.’

Geertz thought the functionalist argument that ritual describes social order is too simplistic, arguing ritual is active in forming patterns of social order and meaning in a contingent world. He disagreed with Victor Turner’s belief on ritual as a means of resolving social tensions, arguing it just displayed them. Turner thought ritual has potential to release people from the binding structures of their lives into a liberating communitas.

And what of our order, democracy?

Millennials all over the world have lost faith in democracy. The Times, 20.10.20

‘In 1900, there were no fully-fledged democracies anywhere. By 1950, 28% of regimes were fully democratic and by 2000 this had risen to 63%. More pointedly, by 1990 democracy was the only game in town. Few could imagine a serious alternative. Fewer sought one. Democracy had won. [Peter] Mair’s contention is that this has become a hollow victory.’ Nick Spencer[5]

‘The minimal function of elections is to make it possible to remove a government when it is no longer wanted. However, even this depends on the existence of clear-cut political choices. It is this basic aspect of democracy that is in question today. Hence the proliferation of concepts such as ‘post-political democracy’ and, in particular, ‘post-democracy’ . . . Mair shows that the effects of ‘partisanship’ on policy have declined in recent decades. Parties, he says, nowadays present themselves as ‘responsible’ (in the way they handle the financial markets, above all); but they are neither representative of nor, for that matter, responsive to voters.’ Jan-Werner Müller[6]

I think the problem is we can’t have our cake and eat it, we have become individualists with our own desires, interests and like the idea of being a part of something bigger, as having a say in governance, policy and expenditure, but are not that interested. No longer bound by kin, our village, our father’s work (if male), we have become consumers of global fashion, goods, gossip, entertainments, thanks to new technologies and are not emotionally bound to a collective.

Culture has crumbled into subcultures, anthropologist Arjun Appadurai argues that with globalisation, mass media, and mass tourism, ‘an altogether new condition of neighbourliness emerges in the twentieth century.’[7] One not bound by place or time, but by shared interests and imagination, creating ‘imaginary landscapes’. I am not convinced. Those that do want to be in a collective are sometimes those who feel disenfranchised and join alt-right groups, right wing militias or become religious extremists.

Sunset with the Cockatoos again, kicking flight in my company.
Wyn by now is in the Blue Mountains. 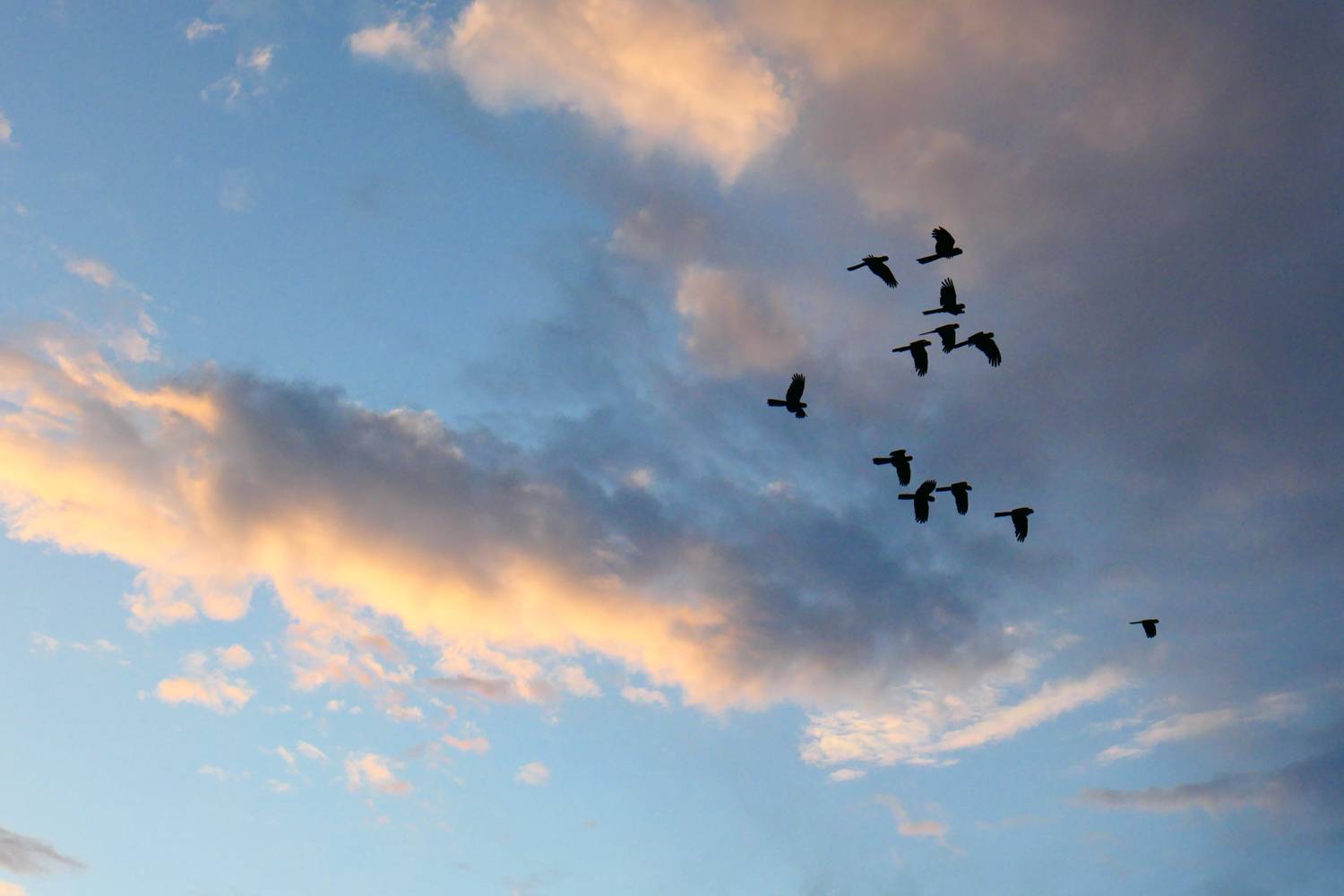 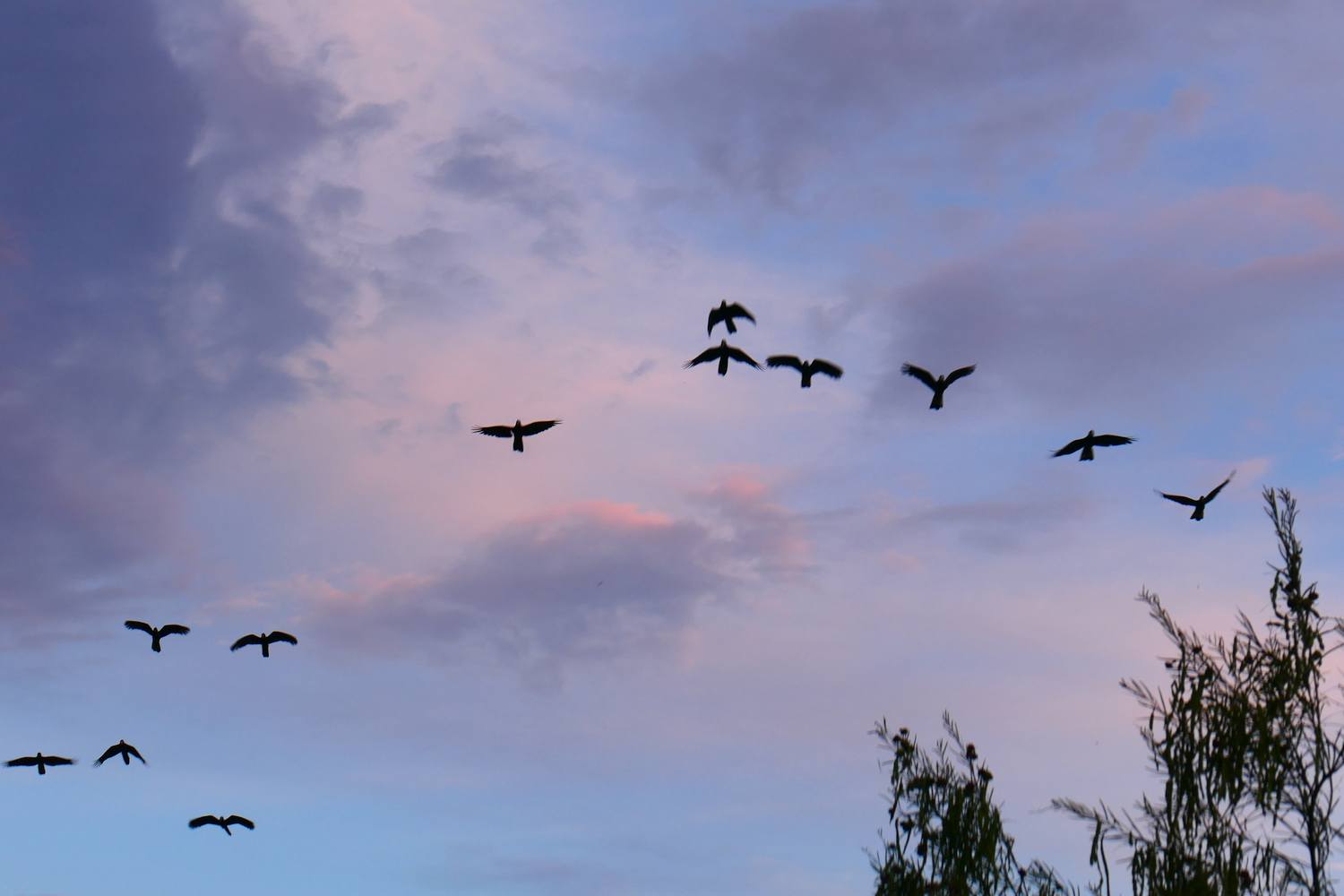 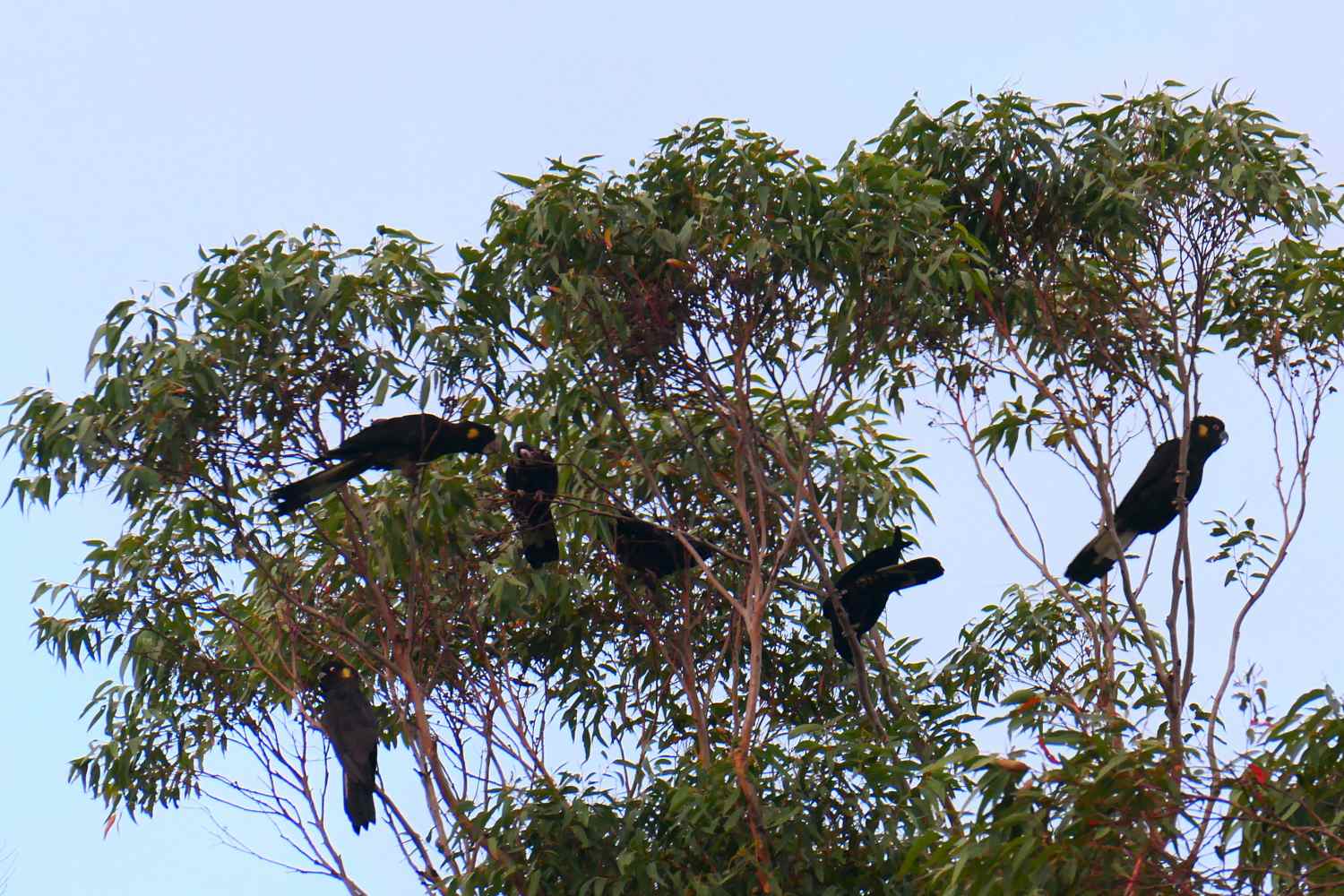 [2] 2.3 million children work in the cocoa fields of Ghana and Côte d’Ivoire. These children are vulnerable to brutal labor practices, including trafficking and slavery.  http://www.slavefreechocolate.org/

[3] Sasha Sagan, For Small Creatures Such as We Rituals for Finding Meaning in Our Unlikely World, G.P. Putnam Sons, 2019.