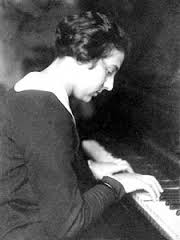 She started playing when she was five. Her mother

was a friend of Gustav Mahler and she knew Franz Kafka

before she knew Terezín, an old Austrian fortress in Bohemia.

Alice “is 103 and cannot quite believe her luck.

before working her way through the repertoire

– Schubert, Beethoven and so on.”

Gavrilo Princip lived in cell No 1,

the assassin who detonated World War 1

and over eight million lives cut,

In the follow-up war, the Gestapo took control,

made the Small Fortress (kleine Festung) into a prison

and the Main Fortress (grosse Festung,

Entering the Royal Court we are given books

from the commandant’s extensive library,

about her philandering Heracles, begins:

There is an ancient proverb people tell

that none can judge the life of any man

for good or bad until that man is dead.

The town square was fenced off, a commodious circus tent

erected for a 1,000 Jews to carve boxes and coffins,

each slice a preservation against deportation,

for the eastern front. A bank opened, camp money

was printed to pay for labour in the ghetto factories

Before representatives from the Danish Government

and the Red Cross visited in June 1944

in the square and a playground built in Stadt Park

even a monument was erected in this Potemkin village.

One visitor described being greeted by a Jewish elder

in black suit and top hat on a sunny day.

the synagogue, school (closed for the holidays),

and in front of the café the Ghetto Swingers play illegal jazz,

in a brook beneath trees in this model ghetto.

being delivered and heard the workers singing

all cued by boys who ran ahead of the officials

into the welcome concert, music lathered to conceal.

The ghetto put on drama and music performances

The people ecreated poetry and art, were even allowed to worship.

They organised lectures on a range of topics including

the Jews of Babylon, the theory of relativity,

and even German humour. Possession of medicine

or tobacco was punishable by hard labour or death.

Communication with a Gentile was verboten.

Alice, her husband and her son were sent there to Theresienstadt.

She says, “We had to play music because the Red Cross came

and the Germans were trying to show what a good life we had.

It was our luck, actually. Even so, hundreds and hundreds

were dying around us every day. It was a hard time.”

“We lost weight. People ask, ‘How could you make music?’

We were so weak. But music was special, like a spell, I would say.

I gave more than 150 concerts there.

There were excellent musicians there, really excellent.

– but they came to our concerts and this was their food.”

“I was sitting for hours, day and night, and practiced

and worked on it. Chopin I played very often.

Actually, they saved my life, the études by Chopin.”

We have seen it done. Roman Polanski shows a German officer

listening to a chronically malnourished and shivering Szpilman

who struggles through Chopin Ballade No. 1 in G minor, (a form he invented),

though in his memoir Szpilman played the Nocturne in C-Sharp Minor,

heard at the beginning of the film, perhaps lacking the drama for that scene.

Sommer’s son Raphael sang his young tongue for the visitors

Raphael was one of around 100 to survive.

One of Germany’s most famous actors and directors,

Kurt Gerron, a Jew, directed a film of the theatrical day

completed in early September called ‘The Fuhrer Gives a City to the Jews’.

The documentary was a drama; the day had been rehearsed

and all the lines prepared.

We sit cross-legged on the floor, the erudite Commandant,

striding past, his black leather boots shine in the spotlights,

and I feel his authority; an actor recites, ‘Our nightmares have happened’.

In Prague I saw the pictures drawn by murdered children

and first heard of this place, they have never flown away –

four windows and a door with stick figures in the garden

incubating bright petals, sutured to a particular past

we believed in. Artist and art teacher

and hid thousands of drawings in two suitcases

before being sent to Auschwitz to be gassed.

German reverses in autumn left the camp in disarray

and the Council of Elders unable to prevent 24,000

inmates being sent to Auschwitz and gassed.

Rafael Schächter conducted Verdi’s Requiem with full choir
and professional soloists, in a hall packed with both SS and Jews.
He said it was the greatest challenge in his career.
Schächter, the soloists, the choir and orchestra were all
sent to Auschwitz soon afterwards. After shooting most of the cast,
and Kurt Gerron himself, were sent to Auschwitz and murdered.
The film was never released, but sections used for propaganda,
the only segments to have survived.

The transport of October the 16th was loaded

with musicians from the welcome concert:

He composed twenty works inside, including an opera,

Here, where one has to overcome matter through form

just to get through another day

and where everything of an artistic nature

is in total opposition to the whole environment; . . .

there is no point in stressing that

it was impossible to play the piano in Theresienstadt

as long as there were no instruments.

before the next inspection scheduled for April. By then,

it had become shabby, most able-bodied Jews

had been sent. Eichmann ordered the town spruced up,

and the ghetto passed this second inspection with a good report,

even as Typhus was infecting from survivors of the eastern camps.

In May, the Nazis handed the ghetto over to the Red Cross

with masses dying in freedom, in an epidemic, and without music.