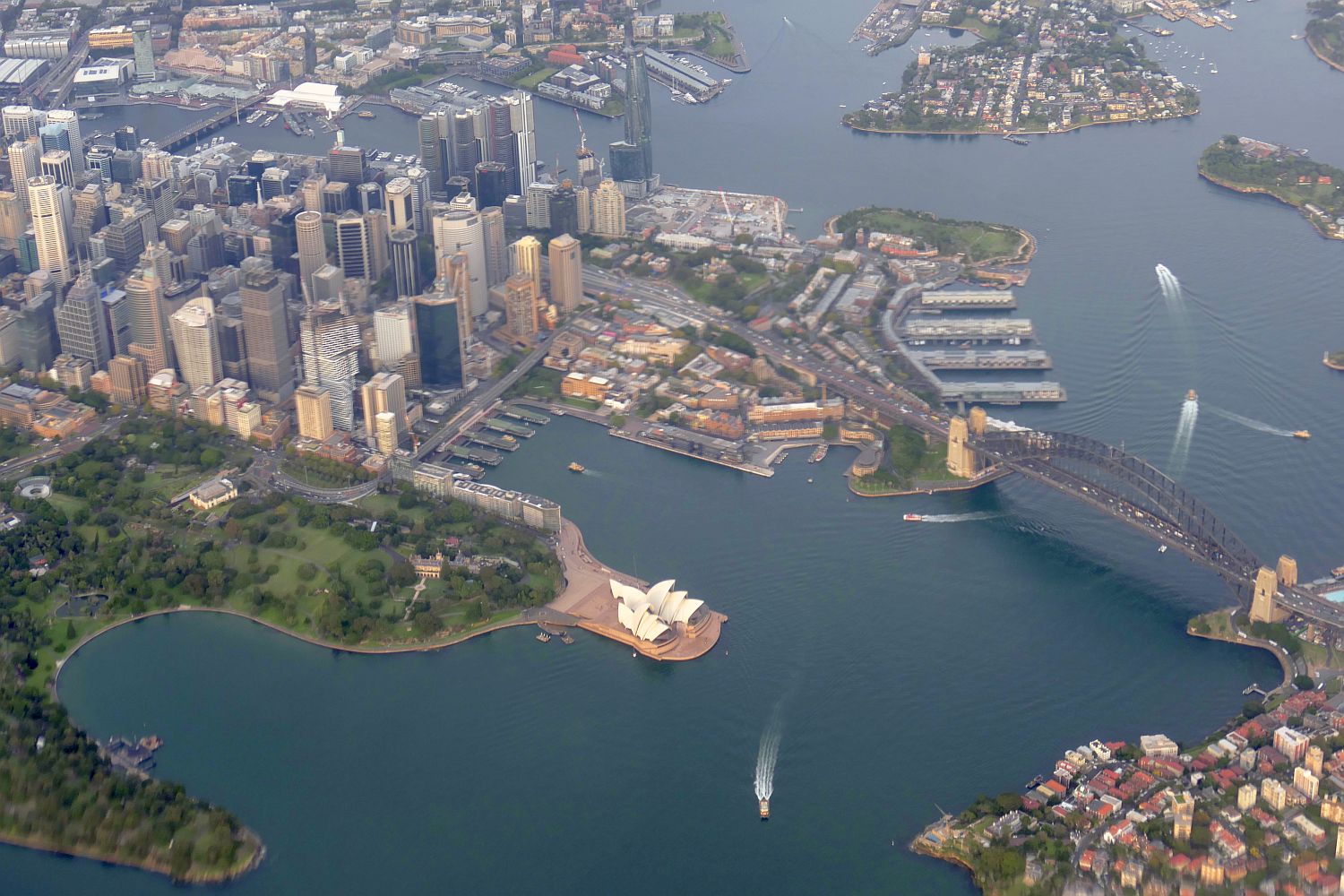 Quitting the train at Town Hall, a scrimmage funnels
into subterranean Sydney. I zag through a maze, evenly
lit corridors, shiny elegance, expensive glitz and gleam,
emerge in Pitt Street, shouldering the turbulence, noisy
stop-go traffic in the company of hurried commuters,
the air all shaken up and dirty, bruising the breath,
the clocks are ticking, life is feeding the mechanicals. 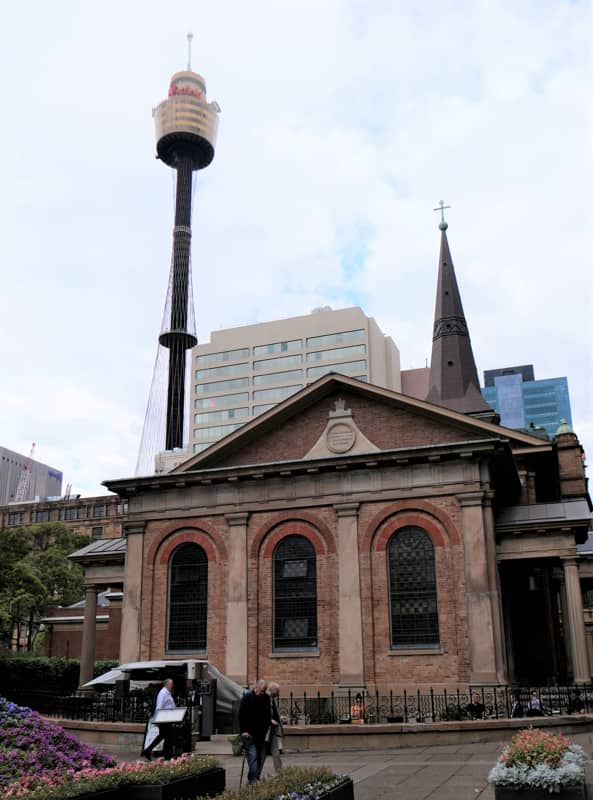 St James Church was designed by forger Francis Greenway,
sentenced to death, transported, his beautiful façade
is ruined by a coffee cart. I’m anxious to exit the racket,
the dirt and ugliness no-one else seems to notice,
head for the water, sit on a wharf and wait for a ferry.

A Sliver Gull stands beside me, snowy white from head
to belly, grading hairline light on grey wings, precious metal,
the jet tips spotted white, with feathers you could blow
like dandelions and feathers stiff with quill and rachis,
scarlet bill and legs, red mascara rings a clear white iris.
Such beauty truly warrants generous attention. 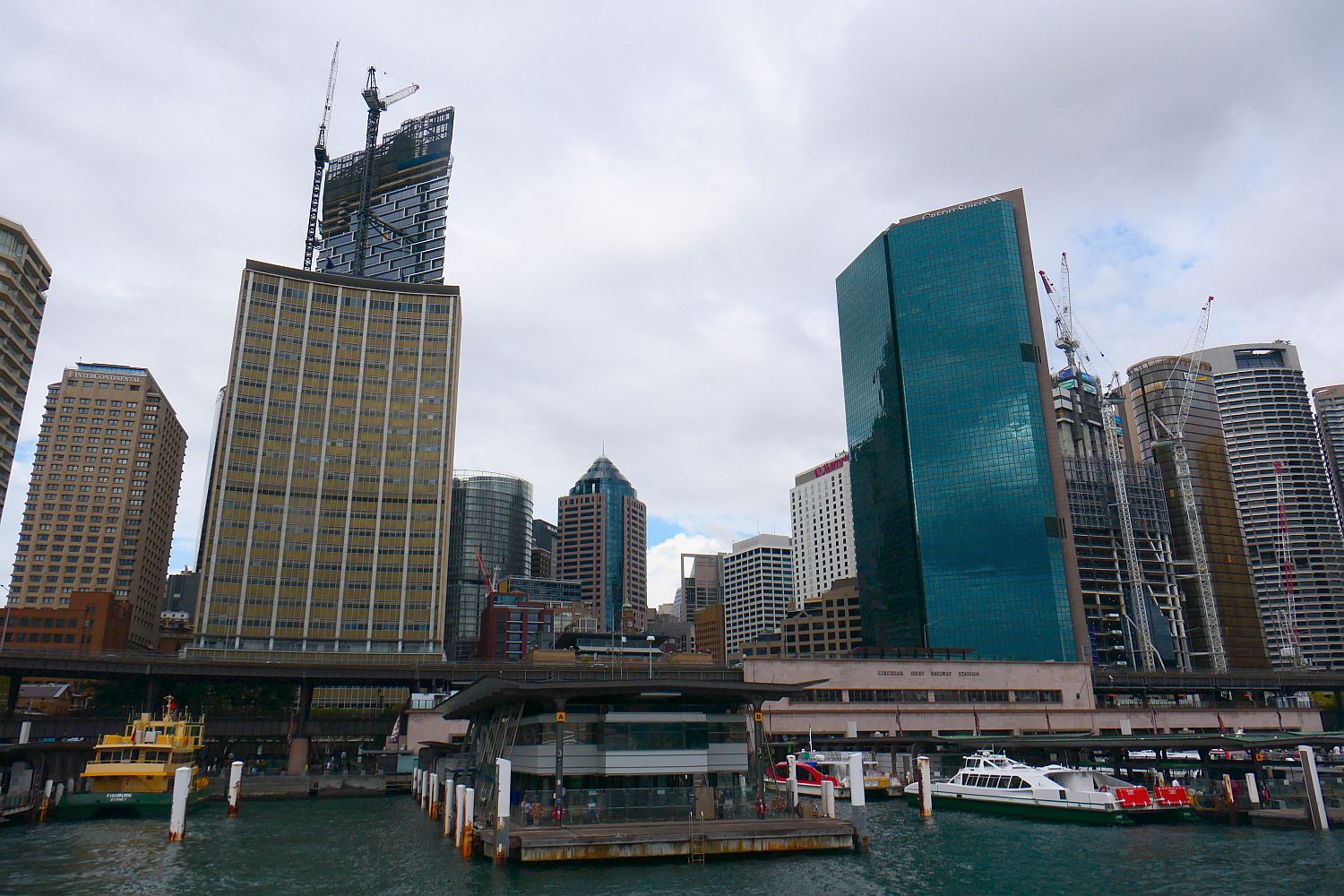 The ferry backs away from the hodge-podge of cranes,
half-finished urban fabric climbing steel and glass
perpetually unsatisfied, trampling on the riddle of history.
One glass tower, the species that slaughters birds, lifts
mercurial patterns of sky and water seducing the camera. 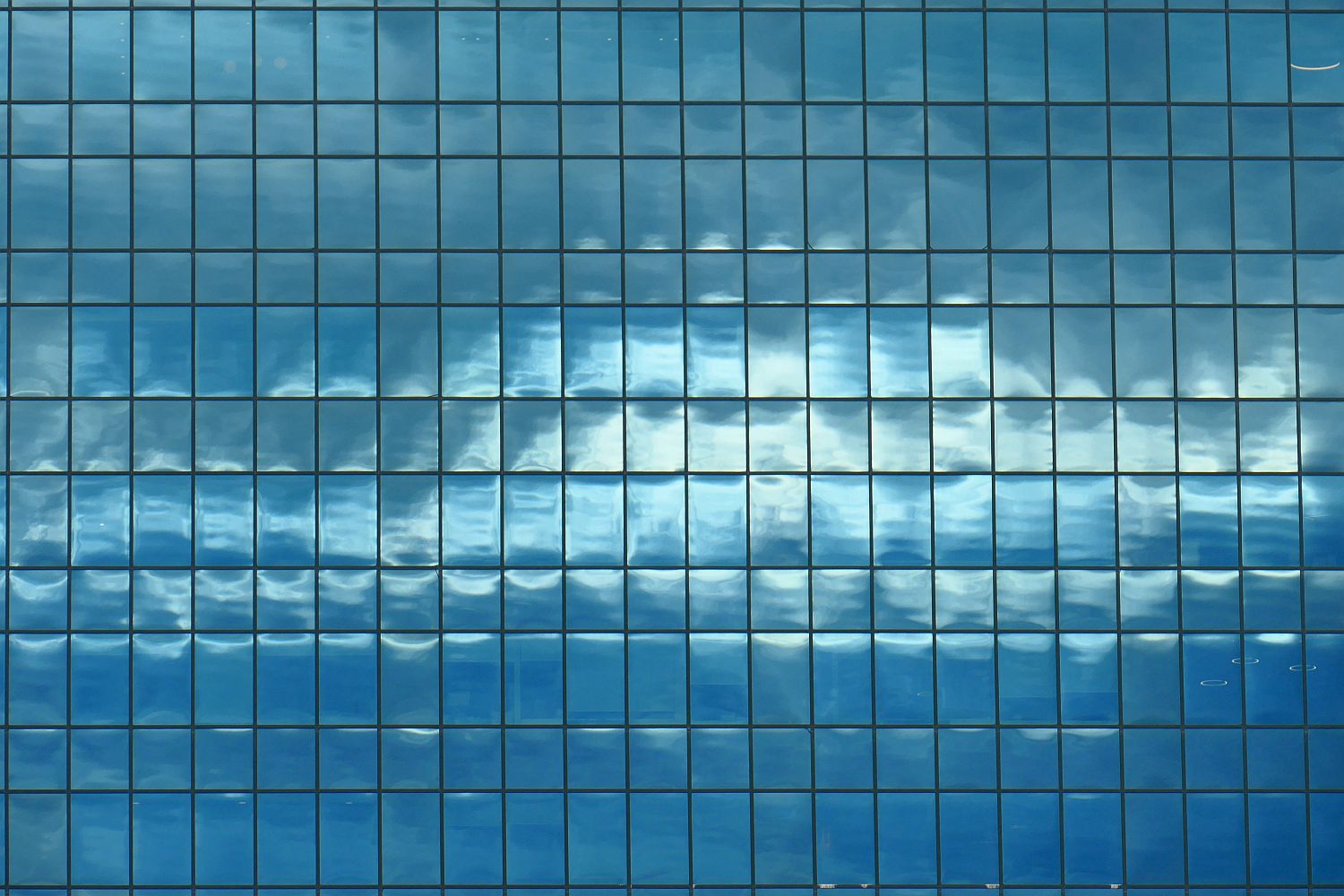 The ferry surges its rhythmic way across the harbour
unspooling the sparkling face of success and holiness
in a capital way, a total surrender in total control. 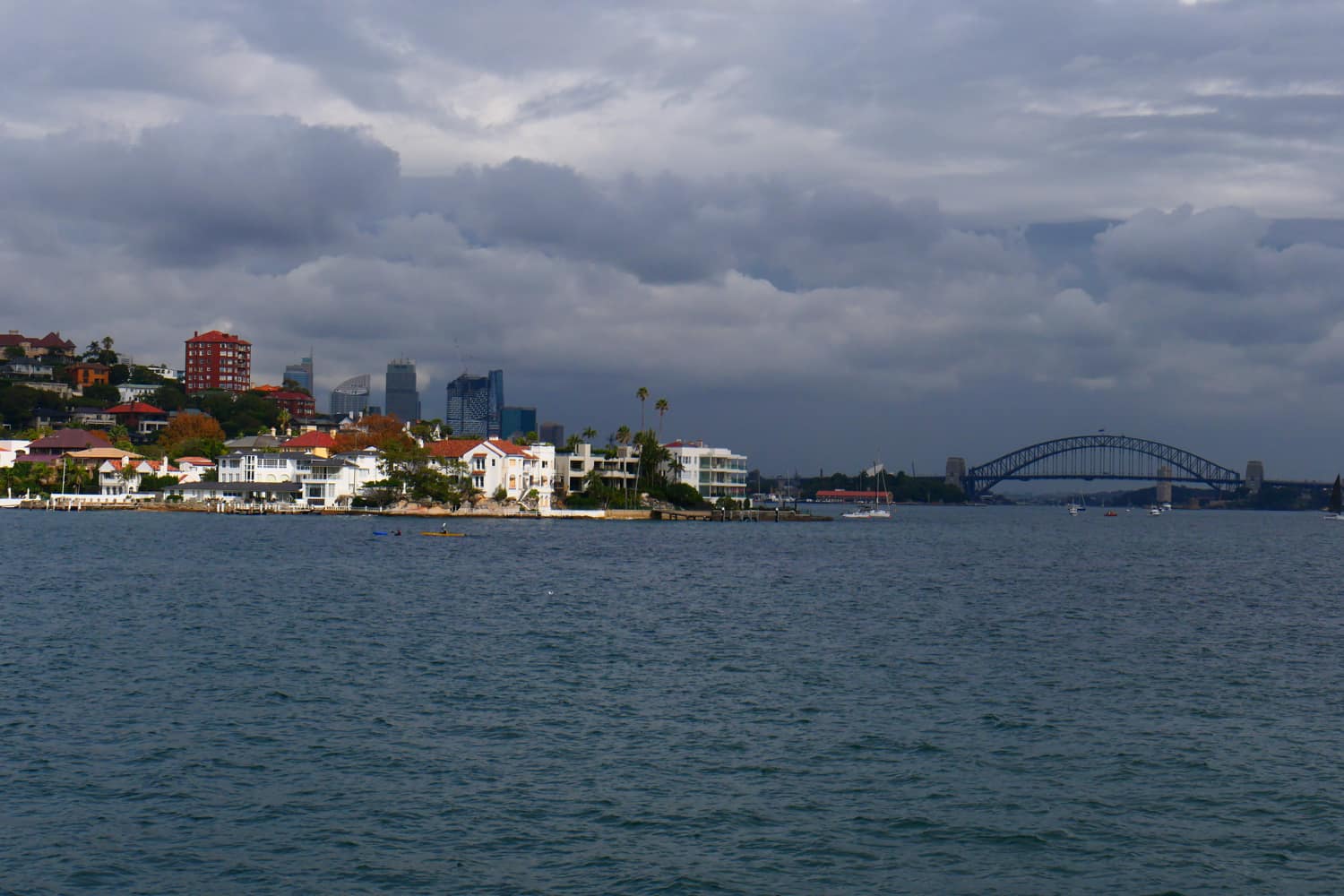 The waters extend to a white buoy, spotlit against
a theatrical backdrop in blues and greys, a baroque effect. 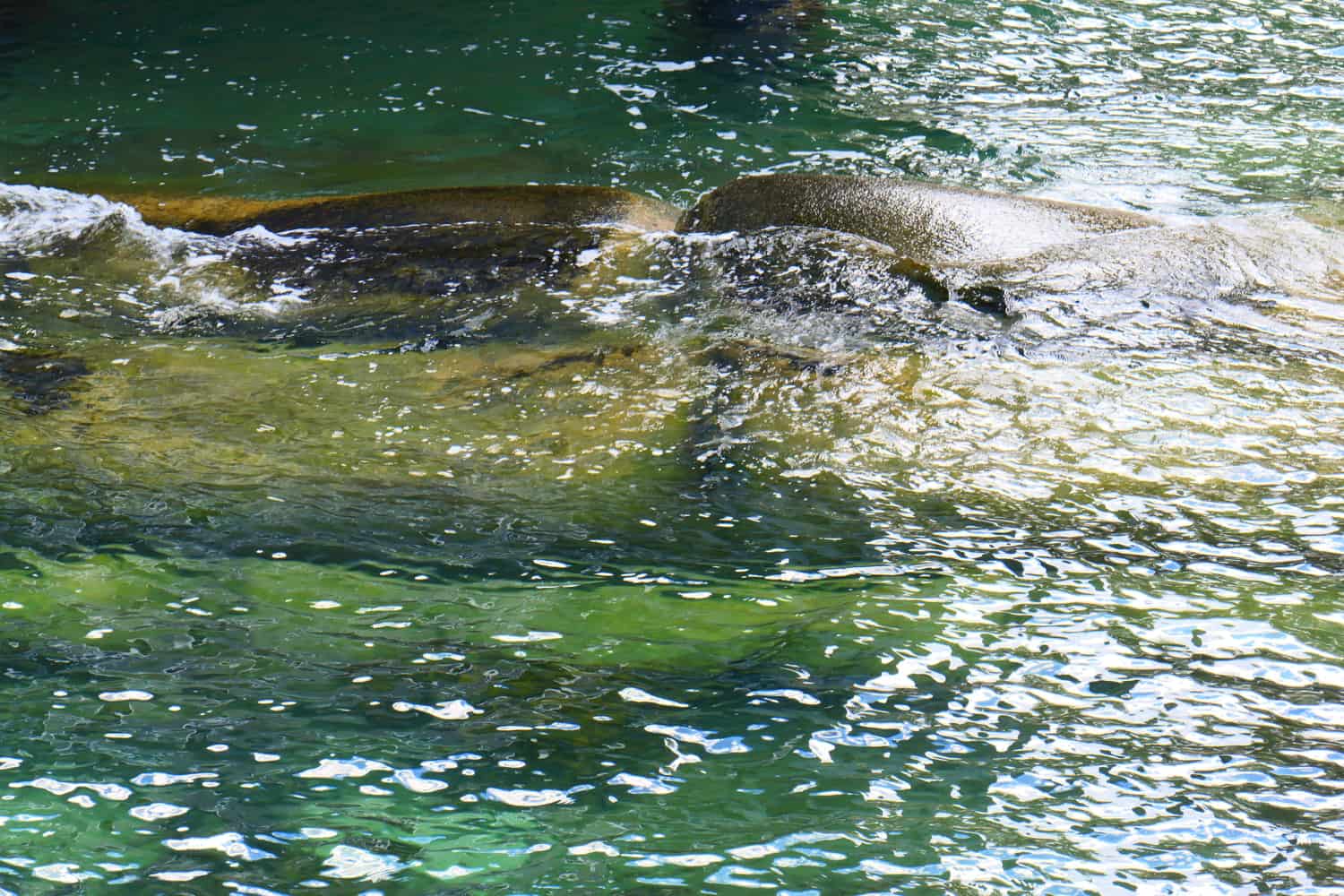 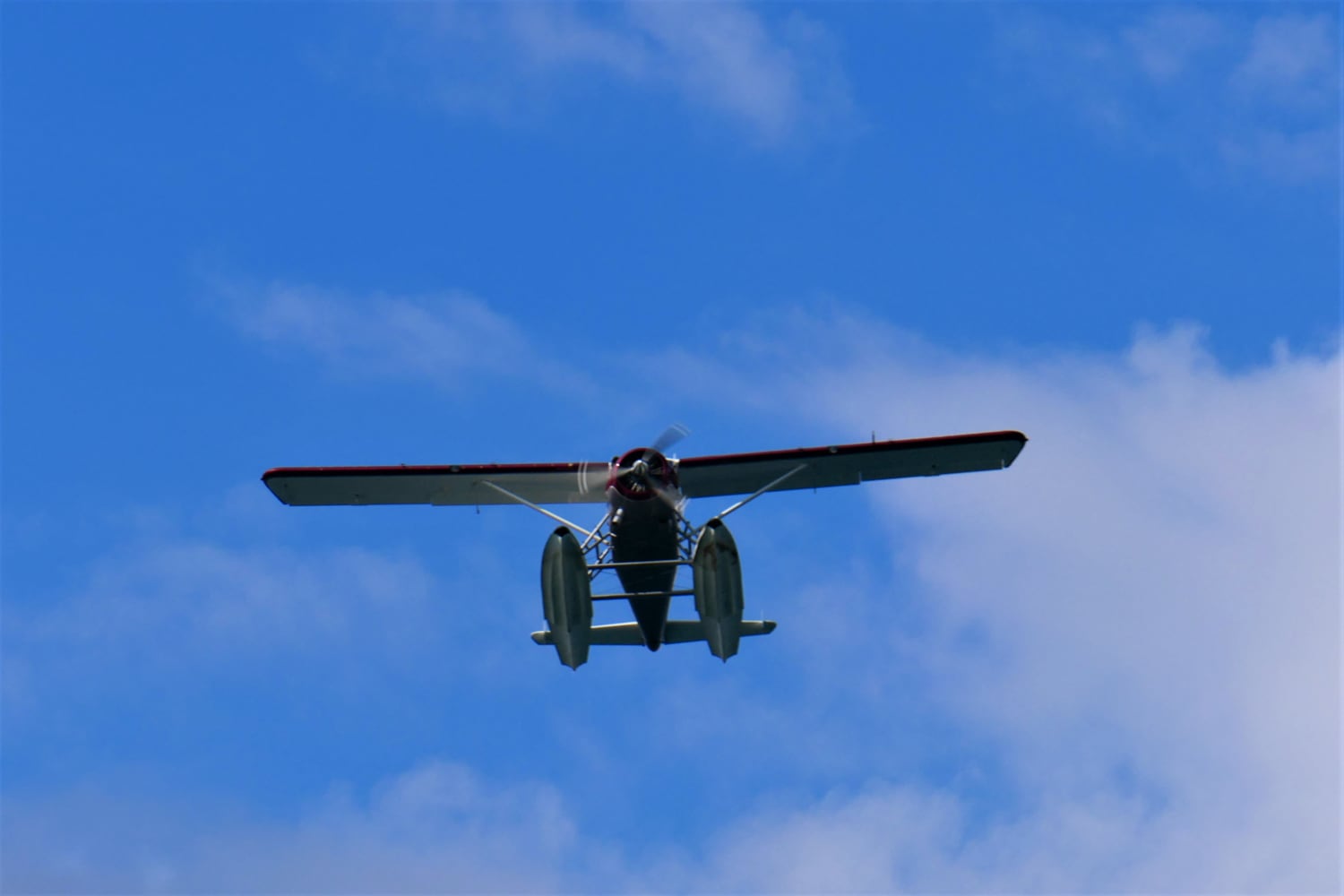 The harbour is a focus of fun, dollars and forgetfulness. 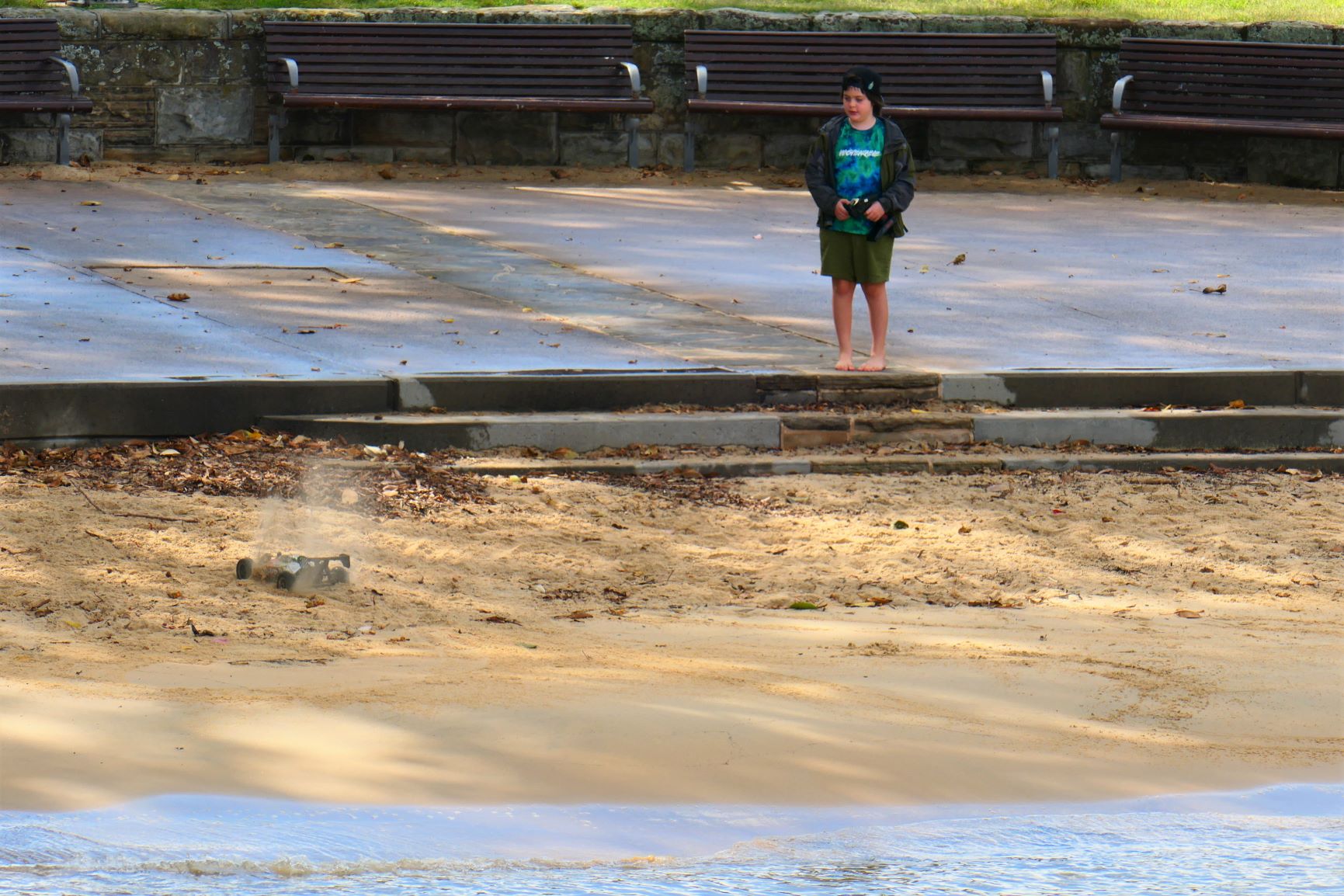 A boy is taking his car for a spin on the beach.
I owned a bulldozer, slow and strong, mining spoils
of earth with two D batteries coupled by wires.

White spinnakers are blooming, sheets on a washing line
on a windy day, the air badgers the water shedding spray
that sails over the bow and spits on my lens. I’m cruising
on the Pemulwuy, outlaw, warrior, resistance leader,
a bullet ended his resistance, another ending being
the severing of his head, shipped to Josephs Banks,
now missing, this ending is never ending.

We pass Fort Denison, one of three iconic buildings in view,
I guess the tower (Packer’s Pecker) has already become iconic. 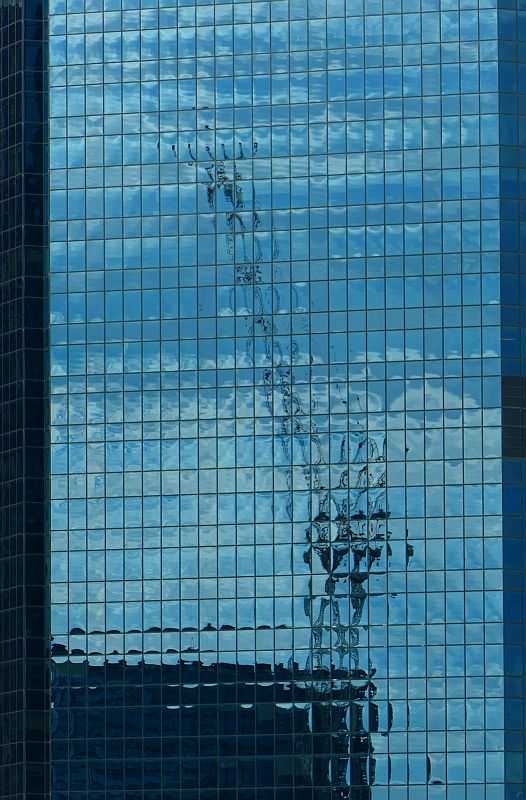 Ditching the opaque aquarium and its surface delights
at Circular Quay, I watch the glass tower leaking a crane.
My father gave me his Welsh tin model in mint condition
until I wrecked it, even though I loved it. I like cranes
more than most buildings, especially distended ones.

I chat with a gallery guide from Buenos Aires, mention
the pavements. She laughs, hadn’t noticed the dogshit
with the corruption, daily demonstrations and financial stress.

It’s witty, vehement, in your face. That and Tom Nicholson’s
‘Cartoons for Joseph Selleny’, remind me where I am standing,
on Country, no matter how compressed the earth, no matter
my blood has spent just one generation in these latitudes.
The present overwhelms the past, once upon a time within reach.

‘I feel like the Harbour always bears that spectre of violence, the brute reality of what begins here.’ Tom Nicholson[i] 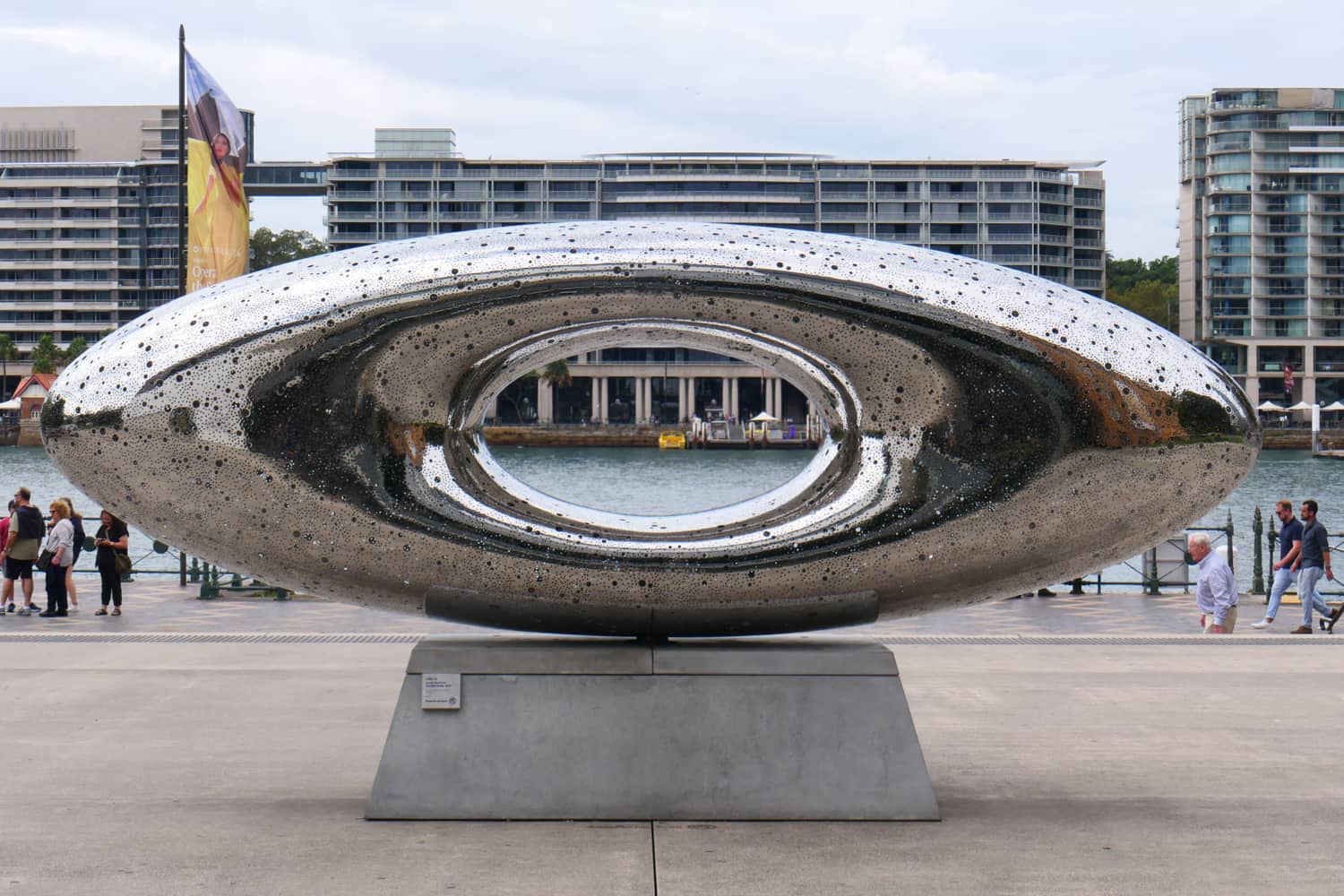 Lindy Lee, Secret World of a Starlight Ember, pierced stainless-steel, 2020, MCA.I want to escape but a vicious storm has closed the airport for hours. 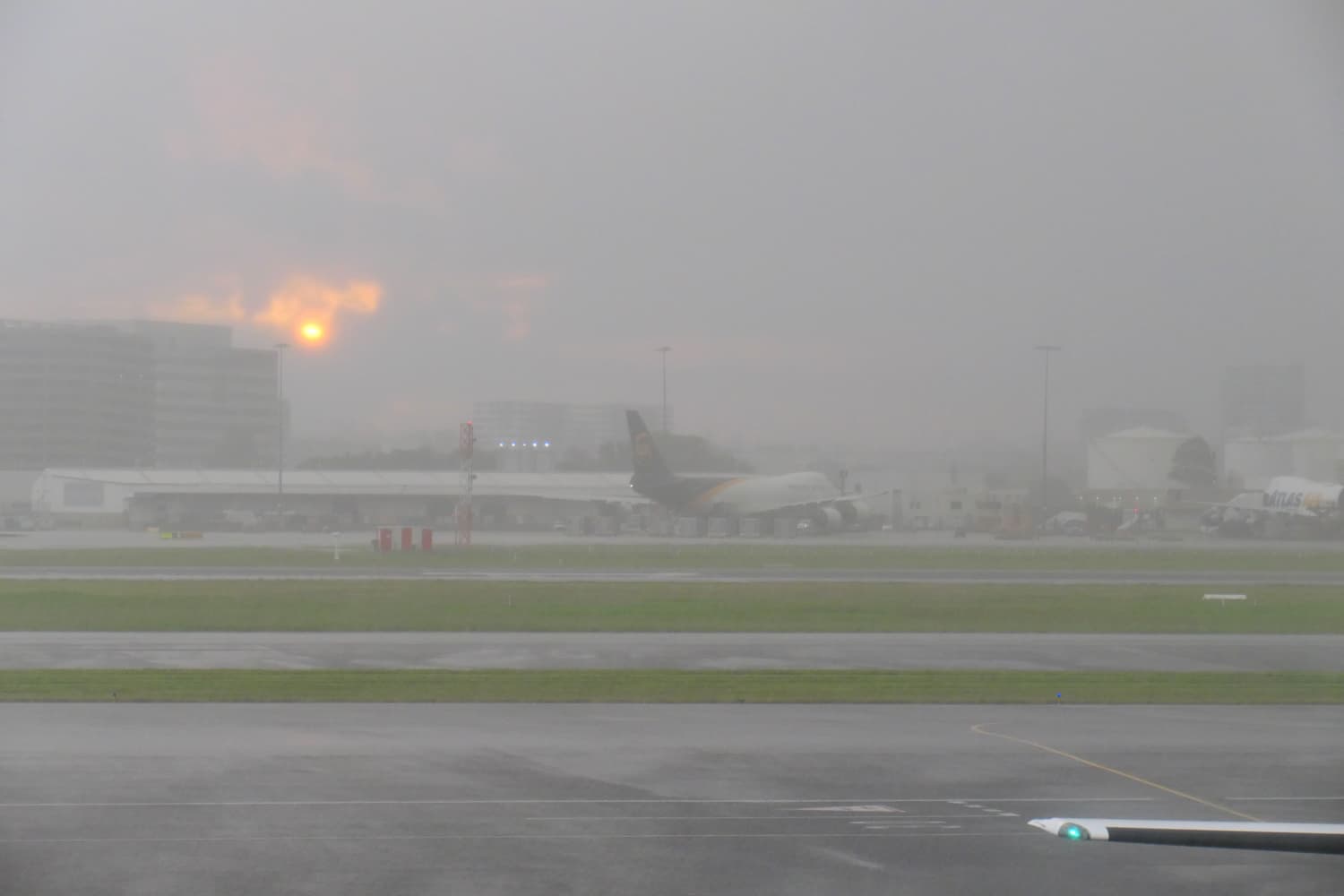 I presume the light in the glass is a reflection, move my head,
the sun doesn’t move. Later, the lights look like a movie set. 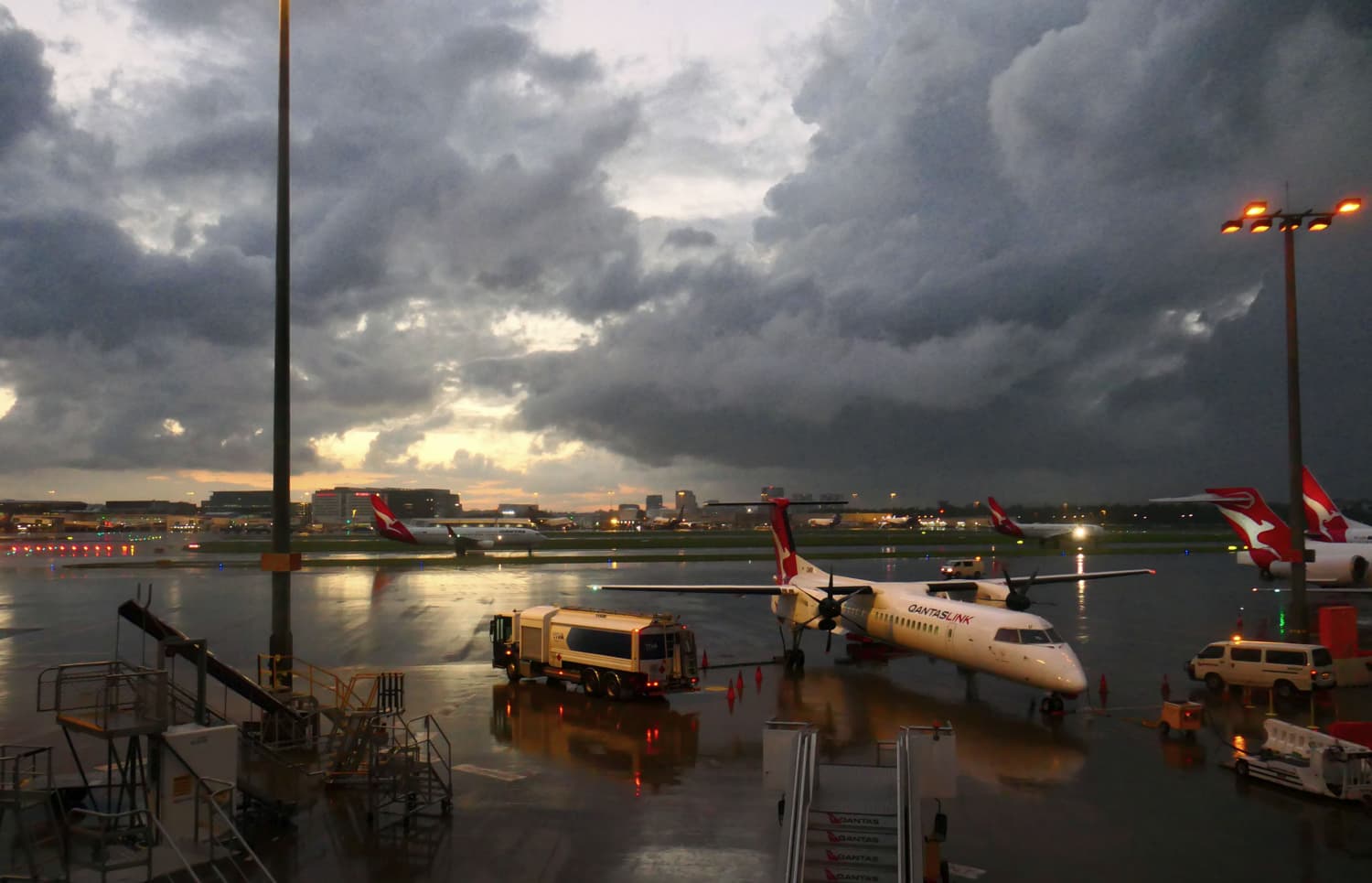 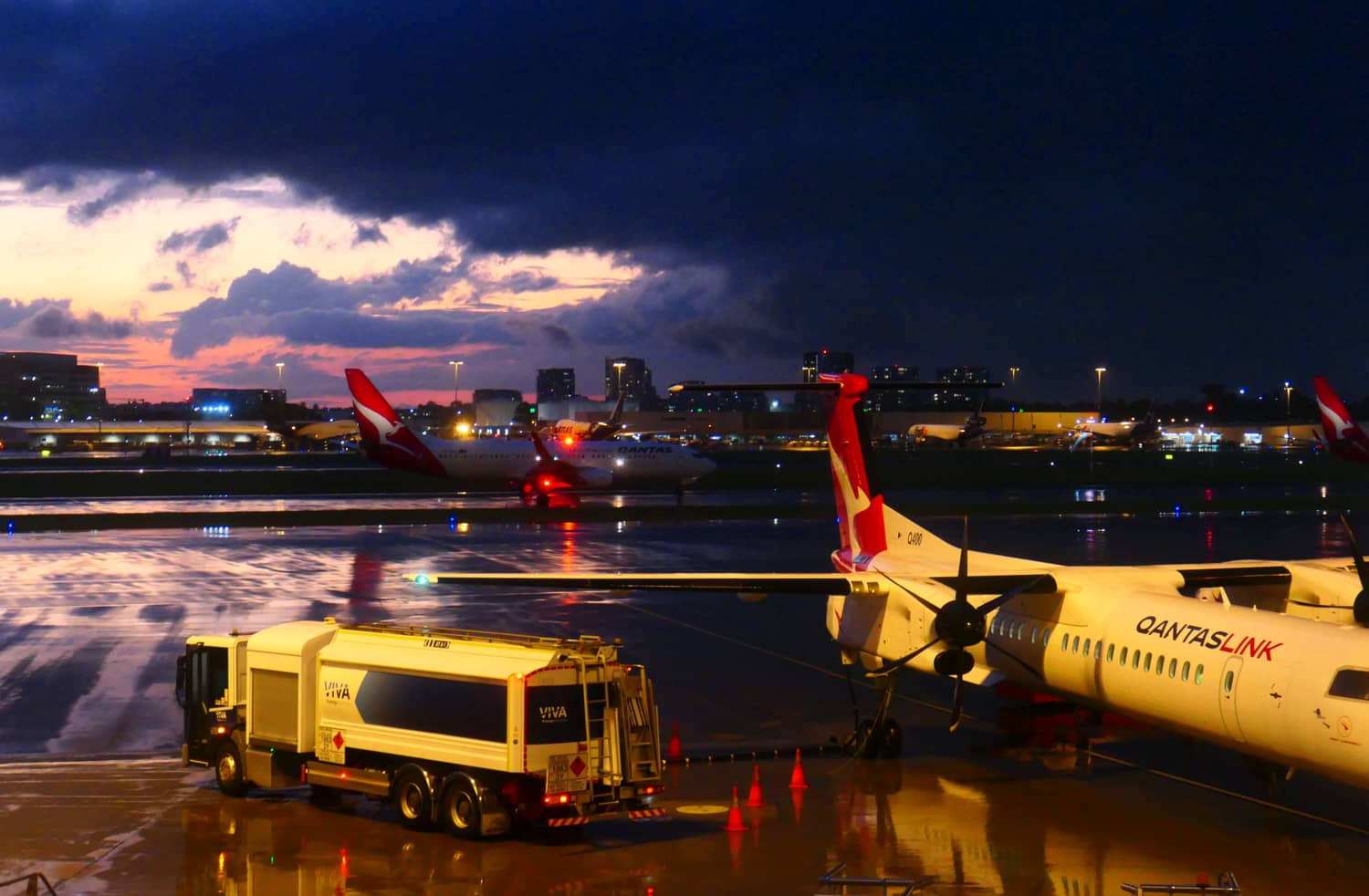 When I finally reach home and step out of the car, the Milky Way
spreads out Sahara bright right above my head and I feel blessed.

‘I began to understand the pull of the city and why, despite all we know about the energy crisis, pollution, noise and non-sustainability, the appalling planning processes and the lack of community in the anonymity of the city, modern people (at least those of sufficient means) thrive on the density, pace and unpredictability of urban culture, in all its hopeless contradictions and dangers. People trying to flee the city permanently were trying to escape from the 20th century, a renegade fantasy. Or perhaps we can see these moves as the experimental living out of a critical discourse.’ Helen Wilson [ii]

I see it as a longing for the natural, for birdsong, the night sky, fresh air, beauty and the ‘unpredictability’ of the natural environment.

Here’s an older post on my take on Sydney with Packer’s Pecker being built (2005). In 2005, it was estimated that Sydney’s ecological footprint covered 49 per cent of NSW.