The UN Food and Agricultural Organisation says there could be global food shortages within weeks. BBC World Service

The Milky Way spawns directly overhead, north to south, with the Southern Cross flying askew dead centre. The lights are on and nailed down. They don’t move, except when everyone is asleep. Knowledge of the rest of them is forgotten. Despite the clarity, lightning lacerates the edge.

The dead melaleucas are successful black tentacles in the photograph, art is disturbingly indifferent to death.

I reach the southern end of our beach. A mimeographed local history, long out of print, names the beach ‘Letterbox Beach’ because the postie used to ride his horse along the beach and deliver mail to a box nailed to a tree half way. I bumped into the farmer in pathology who used to own the forest fringe, now Jagun Nature Reserve. I mentioned the name. ‘Rubbish’, he said, ‘there were no houses. It was called Boatshed Beach.’ He was blind, eager to talk, I was going to interview him, but when I returned from overseas he was dead. A friend still prefers North Beach. She is a scientist and says the name gives you information, tells you where it is. 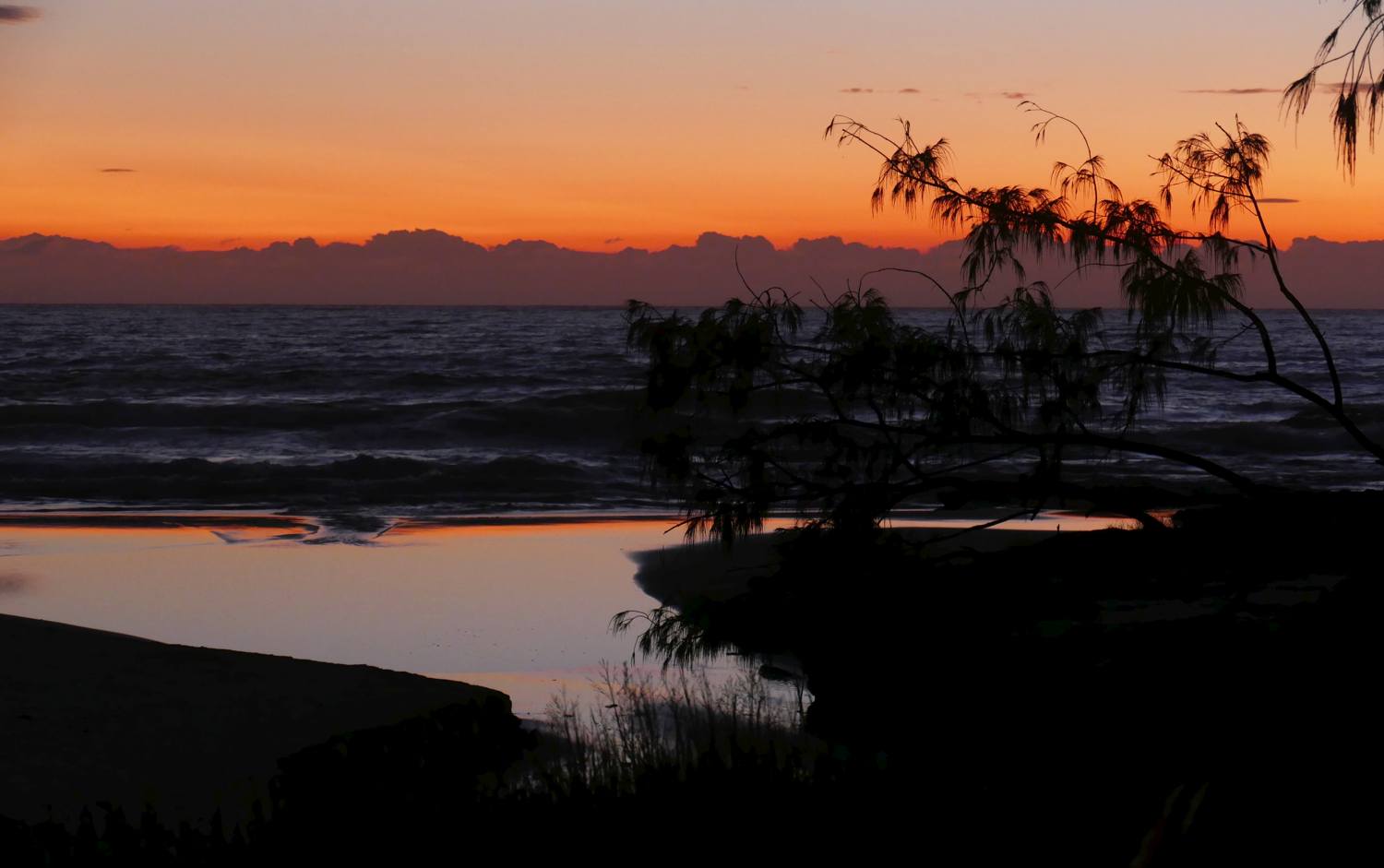 Light lines the costume of cloud before their inevitable decay. 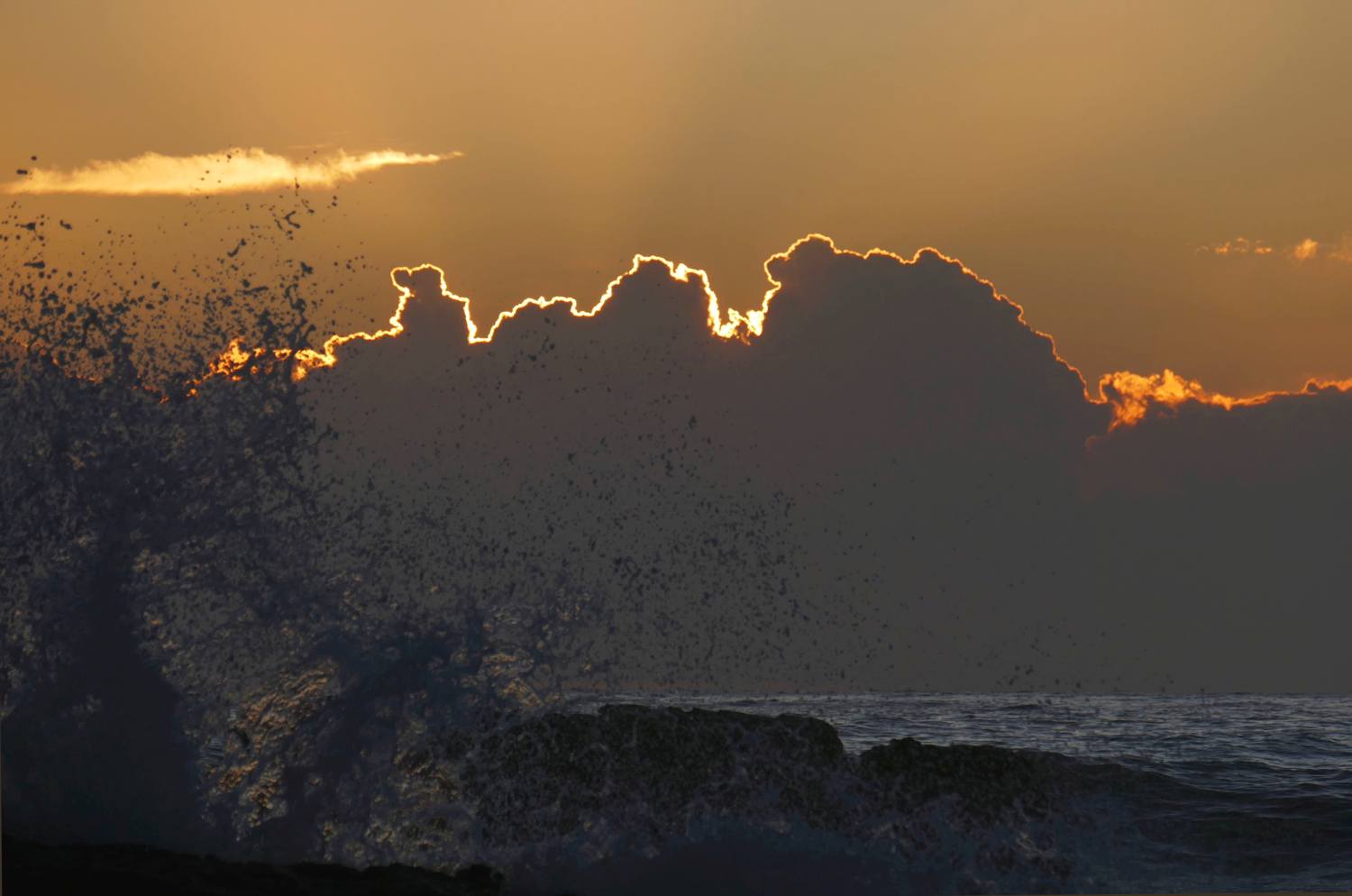 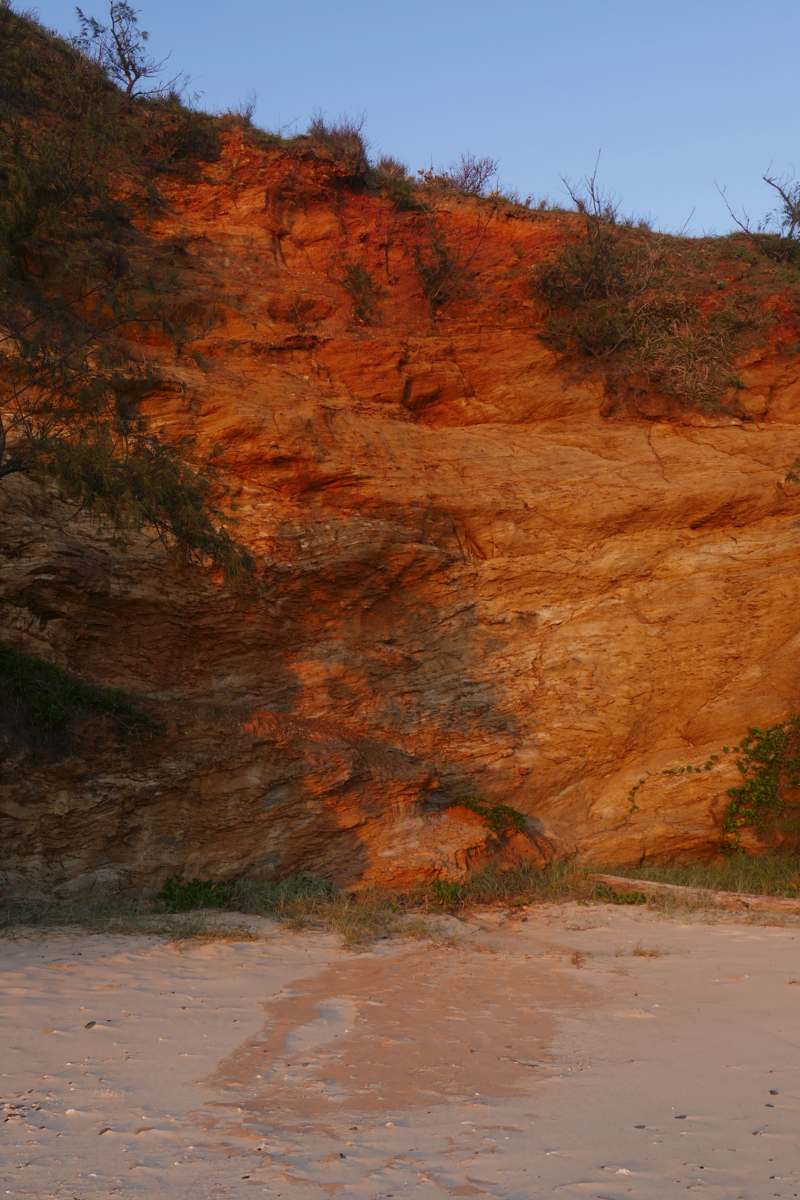 A slash in the sky is a sliver of cloud, it lengthens – through the lens not worth a shot. The line arcs unusually and comes straight for our village. It’s not a cloud, it’s a plane on an unusual flight-path at this time – an emergency evacuation? 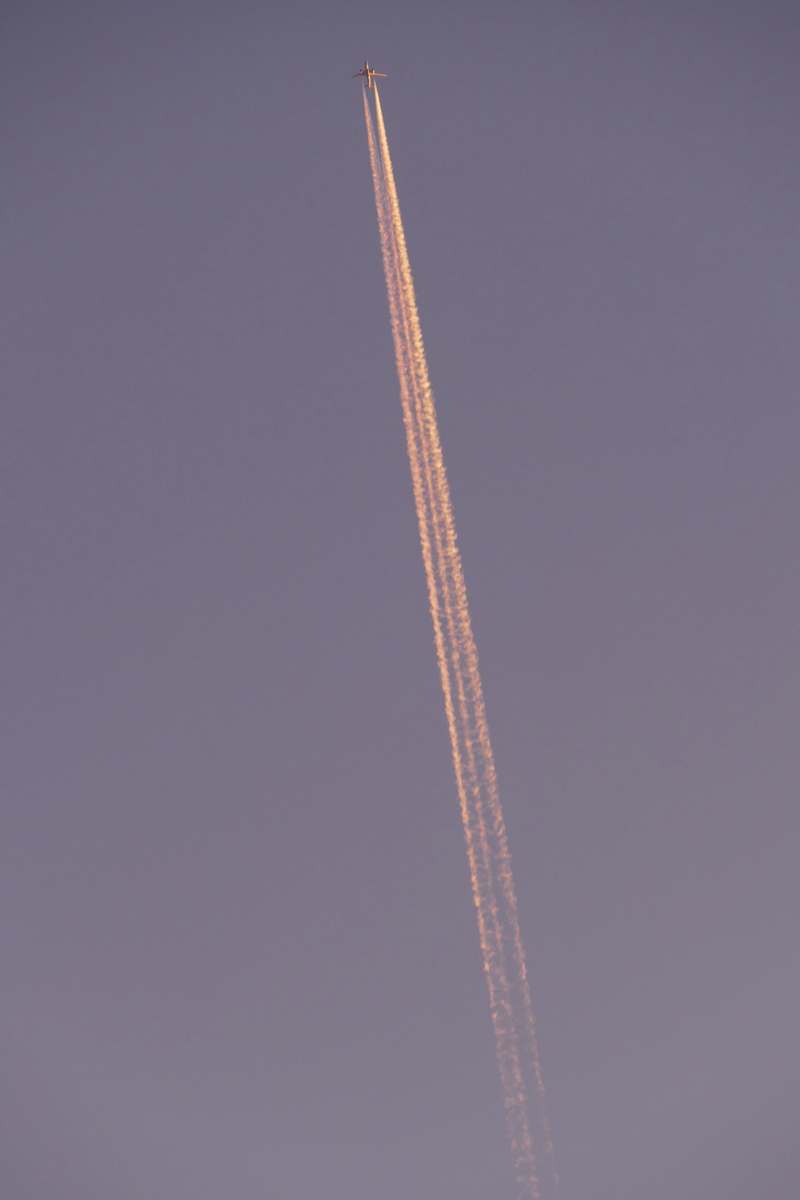 Alone on this shoreline, I imagined I was looking up at what could be the last plane to fly. Those dystopian novels I loved as a teen repossessed me for a moment. Mary Shelley was familiar with the mystery of disease her mother, Mary Wollstonecraft, died of postpartum infection giving birth to her. Her own daughter Clara died of dysentery aged one, and her son William died of malaria aged three. Mary Shelley’s novel ‘The Last Man’ (1826) describes plague at the end of the 21st C. Lionel Verney, the narrator and last survivor of the plague, wanders the empty world with a dog as companion. He says, Yes, this is the earth; there is no change — no ruin — no rent made in her verdurous expanse; she continues to wheel round and round, with alternate night and day, through the sky, though man is not her adorner or inhabitant.[1]

Is this the end of the world as we have known it? 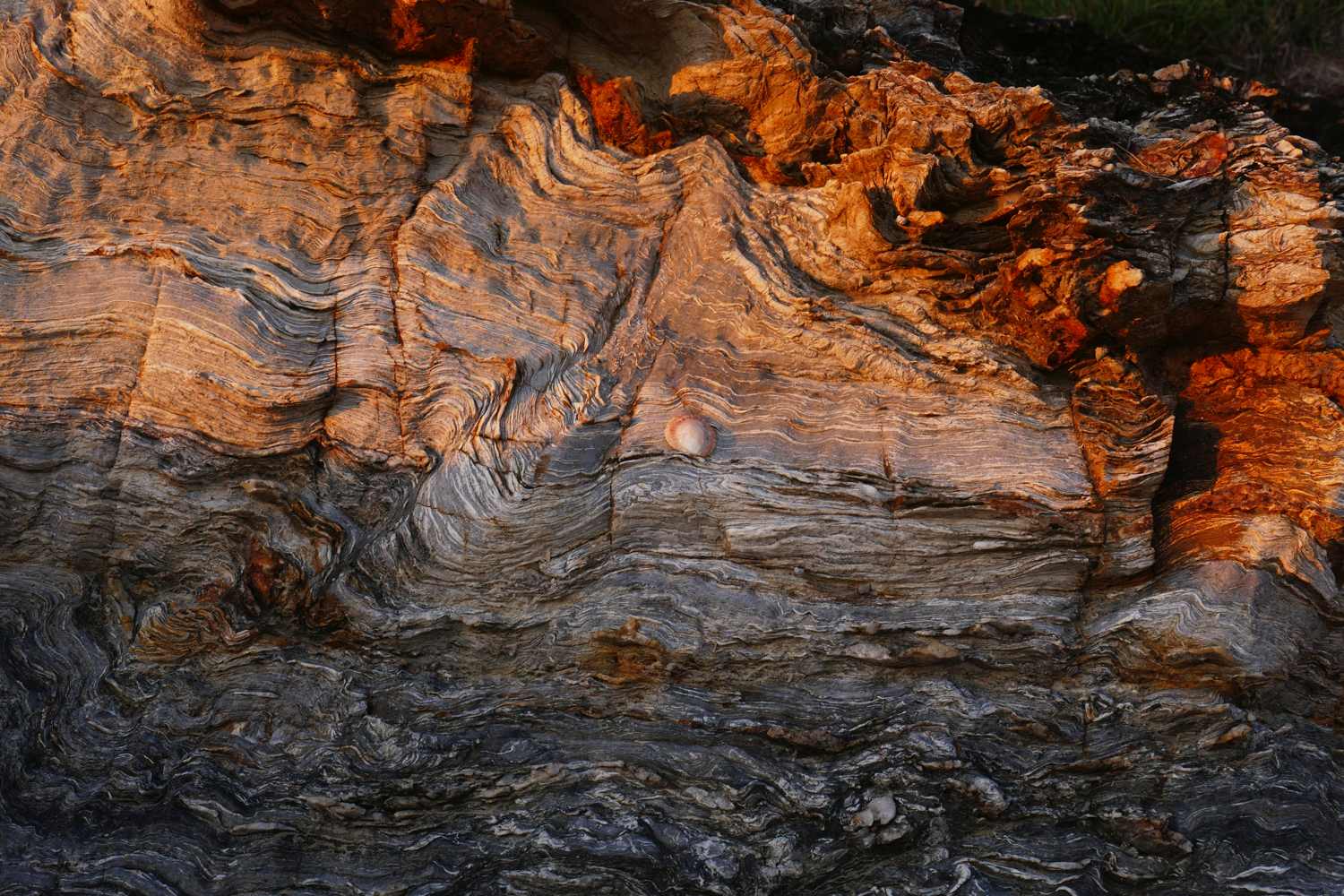 This grey schist has been stretched and compressed, its sedimentary lines doodle a history of violent circulations geologist called folding, rock molted and whipped and now exposed to the sea, the patient destroyer. The shore collects beauty through erosion.

We drive to town, fill the tank, buy some fresh bread and vegetables (and chocolate). We are the only two in the supermarket wearing masks, Wyn has made from an old silk shirt. Glenda from next door puts her hands up and laughs, ‘Don’t rob me!’ Still no toilet paper!

The UN Food and Agricultural Organisation says there could be global food shortages within weeks due to lockdowns and disruptions in areas like shipping and logistics . . .  Will the upheaval force some of us to return to a simpler – and more localised – food distribution model, even if it does mean giving up on year-round access to certain types of food? [2]

The food net has frayed. India has stopped rice exports, lobsters are flying first class to China. The world is changing, cheap food may be ending. The just-in-time model food distributors borrowed from the car industry with no need for warehouses in a highly complex globalized food system, meant logistics were key to the supply chain. The pandemic disrupts all this.

Edible insects set to be approved by EU in ‘breakthrough moment’: Food safety agency’s decision could put mealworms, locusts and baby crickets on menus.[3] This is one of the best news for the future.

Borders are closing; there is a retreat to the national, crisis management circles the wagons. But what we need is individuality to think anew about the present and the future. The way things have been going along was completely unsustainable in any case. The present must be transformed. We thought we might change how things are valued in the seventies, we were so naïve.

[1] Mary Shelley, The Last Man, 1826.  A pestilence does not have human dimensions, so people tell themselves that it is unreal, that it is a bad dream which will end. The theme is popular: Camus, The Plague (1947); Michael Crichton’s The Andromeda Strain (1969) with extra-terrestrial microbes. Then there are the films . . .