rīvus ~ River Tributaries: Positionality; being with and in the River

A meeting, not quite a meeting, nor a seminar, an exchange? A meeting that begins by taking nothing for granted. Where exactly do we begin?

The Welcome to Country is the right place. Brendan Kerin gave a warm and very personal account of his history of the story of too many lives shredded, personal histories that should never had been fit for an archive going back to 1788.

Not like the Gumbaynggirr Welcomes I am used to which talks of borders, ways of life, of language and the earth, even a song

An Auntie from Sydney in the audience who I was talking to (but missed her name) was not keen on the central database idea, wary of centralisation. She pointed out that each nation and clan is different – and made the key point that if you give a river the rights of a person, who take responsibility for those rights.

Dr Alessandro Pelizzon, the legal expert said different jurisdictions approach it differently, but agreed that it is a key question. 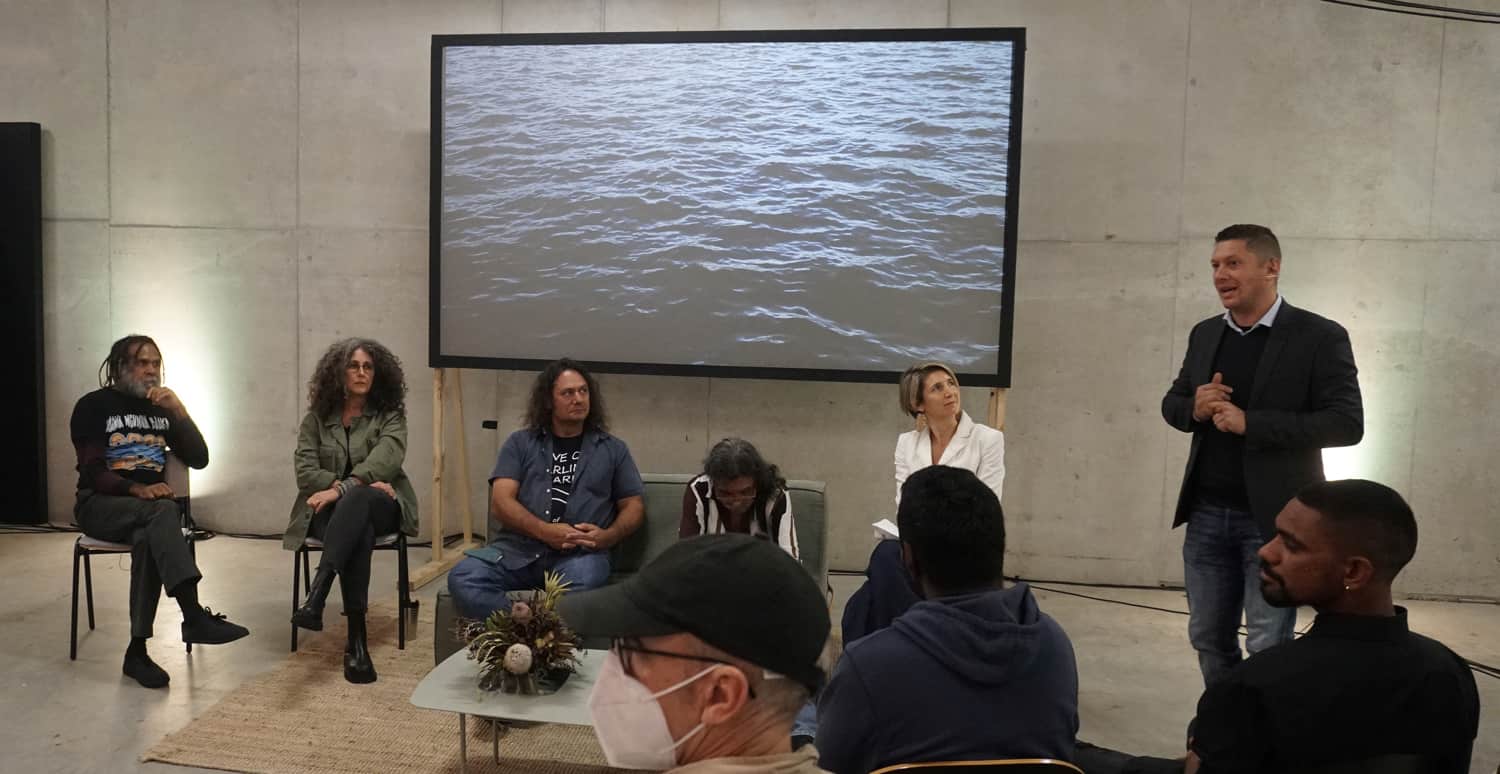 I got carried away at the end of River Conversations. I made a passionate defence of natural aesthetics and my love for my river Miilba – and was reminded it was a Q&A session.

From what I recall, what I said was: If you don’t live off the river by hunting and fishing, weren’t brought up on it, never learnt the songs, dance or ceremony to embody the water – if you are a stranger, like a European – how to get intimate with one’s local river? I try by using its Gumbaynggirr name, by writing, taking photographs, swimming, walking and being there – listening and watching, and caring for her health. The word love hasn’t been mentioned yet and I think awe and natural aesthetics are helpful.

There was a question in there, even if partly rhetorical.

~
Six rivers are included as “participants” in this Biennale: the Atrato, the Baaka, the Birrajung/Yarra, the Boral, the Burramatta, the Napo, and the Vilcabamba. They are represented at each venue by a video of an indigenous speaker whose life has been closely bound up with that of the river.

‘My mother was five when they literally grabbed her from her mother’s arms. From there, they spent two weeks in a jail cell and then they were all shipped to Cootamundra Girls Home . . . I was born at Crown Street Women’s Hospital in Surry Hills in 1971 and I was taken away from my mother in that hospital and I never saw her again.’

‘One of the things with Stolen Generation people is we’re trying to find out where we belong. It’s more or less sitting on the outside of the ring of fire while your mob are in the middle and then slowly making that connection – being able to sit closer to the fire, within that ring of people rather than sitting on the outside.[i]

This wasn’t the time or the place to argue the philosophy of natural rights – Reading Thomas Hobbes and John Lock at university, I never believed in the foundations of natural rights. I guess if I had thought more about it, I might have shared Michael Zimmerman’s view: ‘The concept of human rights is a fiction, it is nevertheless a very useful fiction for changing how human beings relate to each other.’ [ii]

Justice Md Ashraful Kamal’s call for a database of water reminds me of Ian McHarg wish: ‘Next, we must initiate massive global inventories and both invent and install sensors to provide a continuous monitoring process. From baseline to present, we must observe changes and the operation of constituent processes, particularly biogeochemical cycles. … I can think of no human activity of greater importance. It should be seen as the primary consequence of recognizing the global environment as the principal objective in the world’s agenda. It identifies the most important purpose of the world’s population for now and all time. We must come to know this world, to understand how it works, and to regulate our behaviour to maintain and enhance the biosphere. We must identify the welts, lesions, wounds, and suppurations on the global epidermis. We must learn to green the earth, to restore the earth, to health the earth. I long to live to see it.’ [ Ian McHarg, the father of ecological planning, from his autobiography, A Quest for Life, 1996, Wiley, p374.]

[ii] Michael Zimmerman, ‘The Critique of Natural Rights and the Search for a Non-anthropocentric Basis for Moral Behaviour’, Journal of Value Inquiry 19, 1985, p50.