The highs and lows of plastic 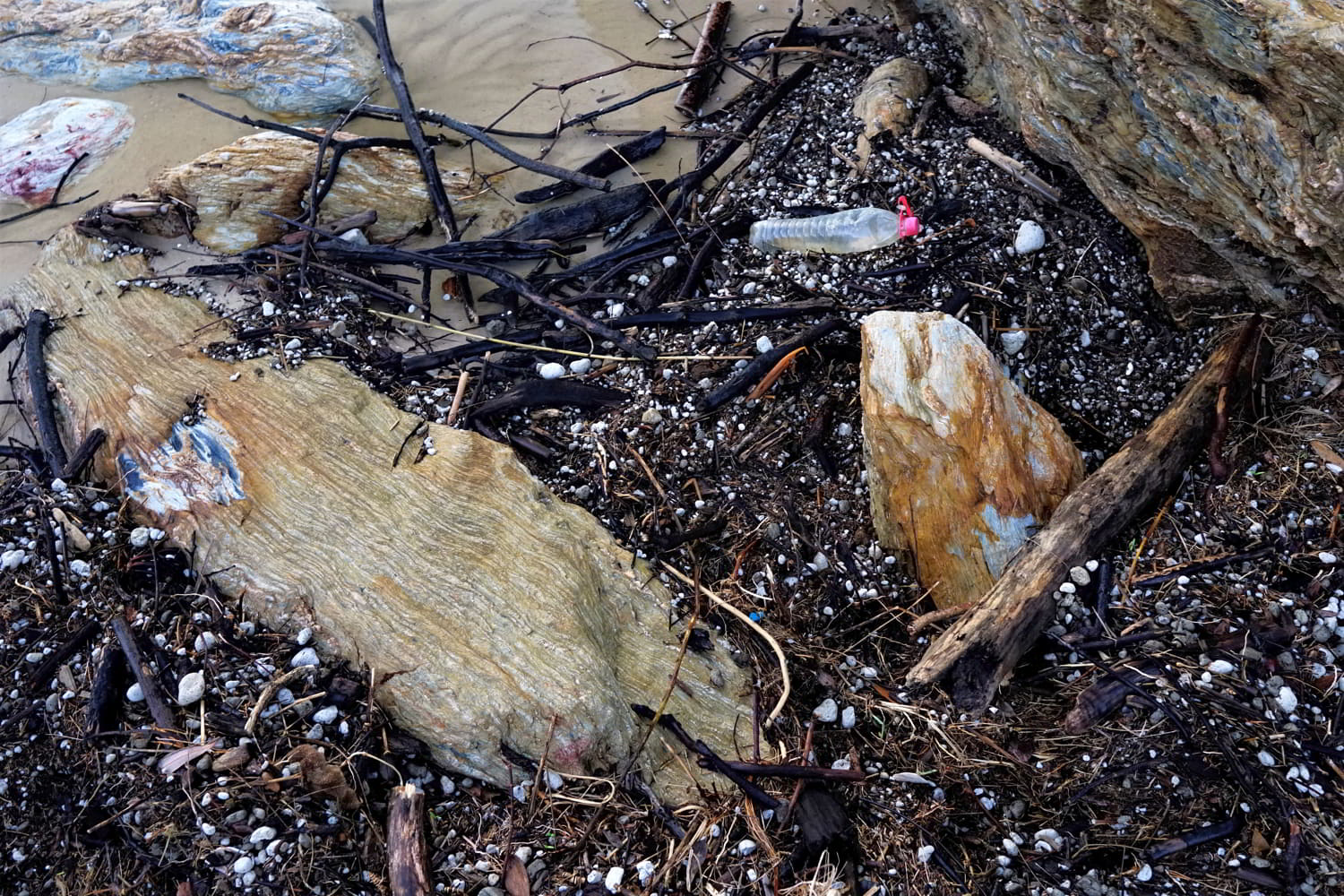 Fifty years ago, I thought it was magic. In chemistry class, slowly pouring sebacoyl chloride in heptane into a beaker of water with 1,6-diaminohexane. Using tweezers, I carefully reached the convergence, pinched and drew out an emerging translucent thread. Excited, I pulled too hard and it snapped. I had manufactured a short strand of nylon.

Plastic production has increased almost continuously from 1.8 million tons in 1950 to 465 million tons in 2018, and more by now. As of 2017, 7 billion of the 8.8 billion tons produced globally over that whole period have become waste.[i] Their manufacture from fossil fuels, produce global greenhouse gas emissions, and broken down, this substance circulates through the planet, even our blood, lodging in our organs.

At sea level, the wounds shine, a bottle, pink top, red handle, a blue shard, a daffodil yellow label. I confiscate them from the debris of wood, shell, pumice.

‘It really surprised me to find microplastics in every single snow sample I analysed. Mount Everest is somewhere I have always considered remote and pristine. To know we are polluting near the top of the tallest mountain is a real eye-opener . . . With microplastics so ubiquitous in our environment, it’s time to focus on appropriate environmental solutions. We need to protect and care for our planet.’ Imogen Napper (2019)[ii]

That same year, Victor Vescovo explored the Mariana Trench, the deepest part of the Pacific Ocean at 10,908 metres (35,787 feet). Sarah Gibbens writes, ‘He observed several marine creatures—one of which is a potentially new species—a plastic bag, and candy wrappers.’ Gibbens noted another 2019 expedition that sampled, ‘amphipods in six deep-sea trenches, including the Mariana, and found all were ingesting microplastics.’[iii]

Richard Thompson marine biologist reports, ‘We find microplastics in every sample of beach sand, whether it’s in Australia, Asia, Europe, North or South America. We’ve looked in the deep sea, in Arctic ice, in the gut of hundreds of fish from the English Channel, and we’ve found microplastic contamination everywhere.’ [iv]

‘Thompson discovered that the sand on all our beaches contains gazillions of tiny grains of plastic, made small by the mechanical grinding of waves. The plastic attracts toxins and enters the food chain: ‘When they get as small as powder, even zooplankton will swallow them,’ he says.’ [v]

Scientists call these tiny plastic grains ‘mermaids’ tears’. I have a poem, published in two anthologies, that examines them on Lord Howe Island.

[i] Laura Parker, ‘Plastic pollution is a huge problem—and it’s not too late to fix it’, National Geographic, Oct 7, 2020.

[ii] Quoted by Damian Carrington, ‘Microplastic pollution found near summit of Mount Everest: Humans now known to have polluted Earth from deepest ocean to highest peak’, The Guardian, 20 Nov, 2020. The study, published in the journal One Earth, analysed samples collected by a National Geographic expedition in 2019. Napper has also found that a washing machine cycle can release 700,000 microscopic plastic fibres, and that ‘biodegradable’ plastic bags were intact after three years in the natural environment.