Colombian cartels killing those who don’t obey their Covid-19 lockdowns. The Guardian

What makes us who we are? Modified Humans. Gene-editing technology is rapidly advancing. New Humanist

Victorians are wearing masks to slow the spread of coronavirus. But what if you’ve got a beard? ABC

Cocaine use at near ’20-year high’, while Australians turn to vaping over cigarettes. ABC

Most Covid-19 patients admitted to a Sydney hospital in March still have symptoms: more than three months after being discharged from St Vincent’s hospital, some 80% continue to experience symptoms. The Guardian

Health care has a huge environmental footprint, which then harms health. This is a matter of ethics. The Conversation

Eos offers a thin crescent moon over the Forest with Venus in close attendance, a spark through the trees to the North-West. In the South-East, Venus-bright Jupiter balances the cosmos but starts fading over the green mountains. A Fan-tailed Cuckoo is the only one awake apart from us. Wyn is on the floor doing her stretches, I am at the keyboard. The Kookaburras start calling, along with some Noisy Miners. It’s cool out there and finally the Pied Butcherbirds, professional musicians, start their haunting aubade.

Off early for birding, as we are driving off, Wyn asks, ‘Have you got your binoculars?’ ‘Fuck, bollocky, bollocky, ’I said, surprising myself, a phrase I have never heard and never used before – where did it come from? That’s the magic of language, its infinite power and the wonder is we are all experts, all creative with words (with no need for Noam Chomsky’s hypothesis that a universal Grammar is inscribed in our DNA).

so lets not call it a novel.

A poem, I have argued, is a tool for thinking and feeling and speech, it is speech and not speech. 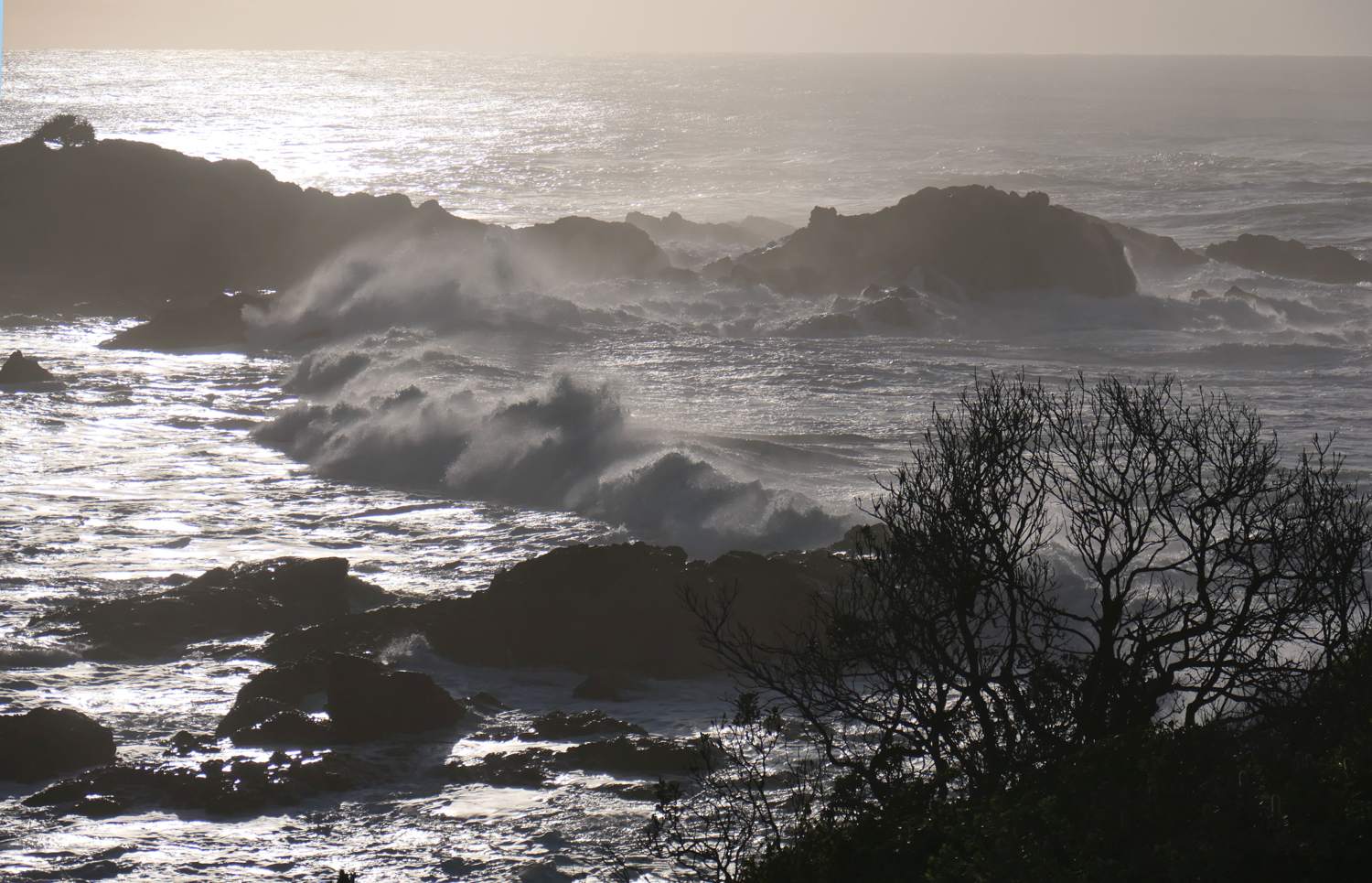 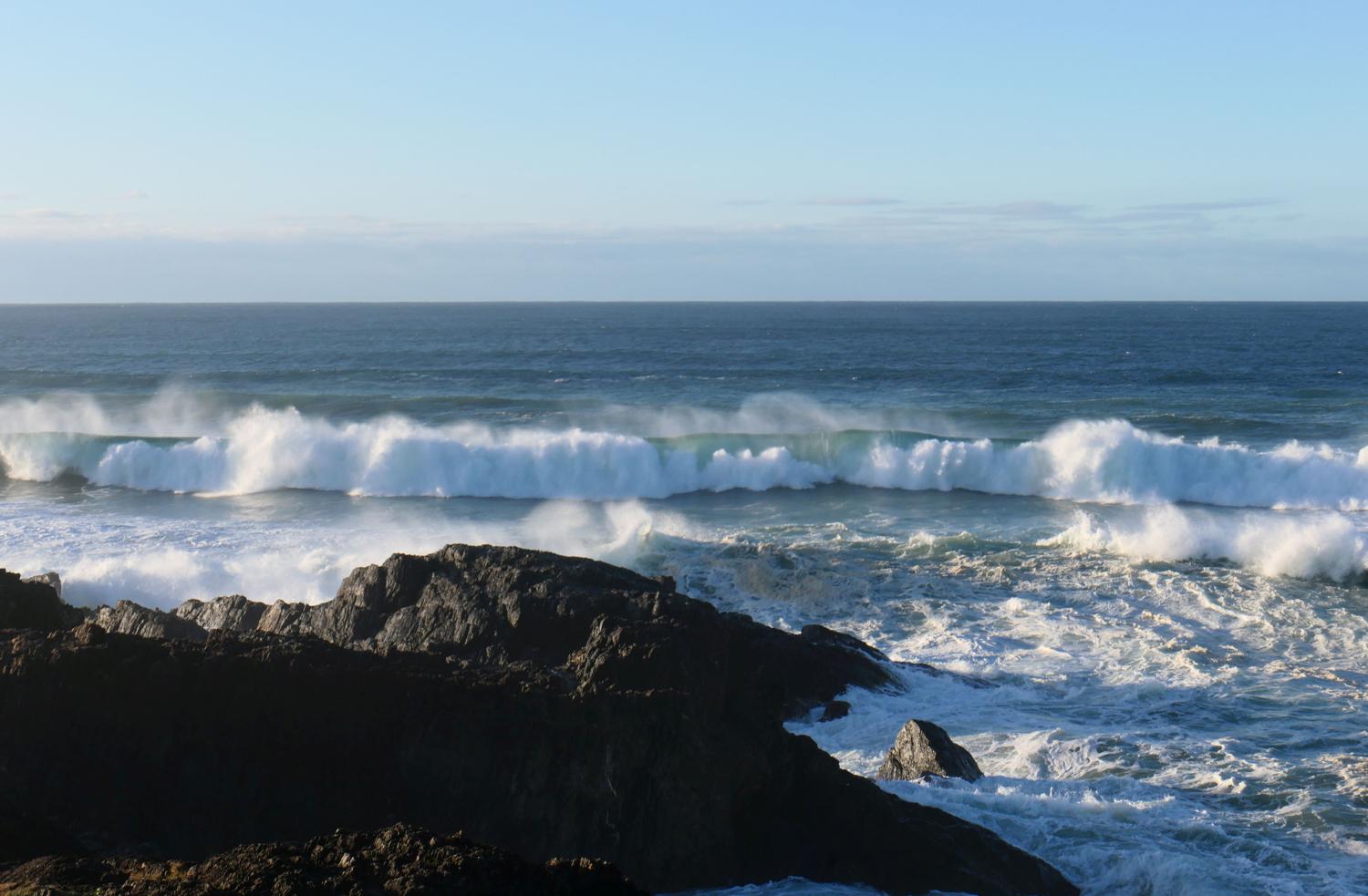 The waves are losing control, small blizzards run along the crests, the welding shatters on the black rocks, Gannets borrow the surging energy, a rapture – the wind in your mouth. 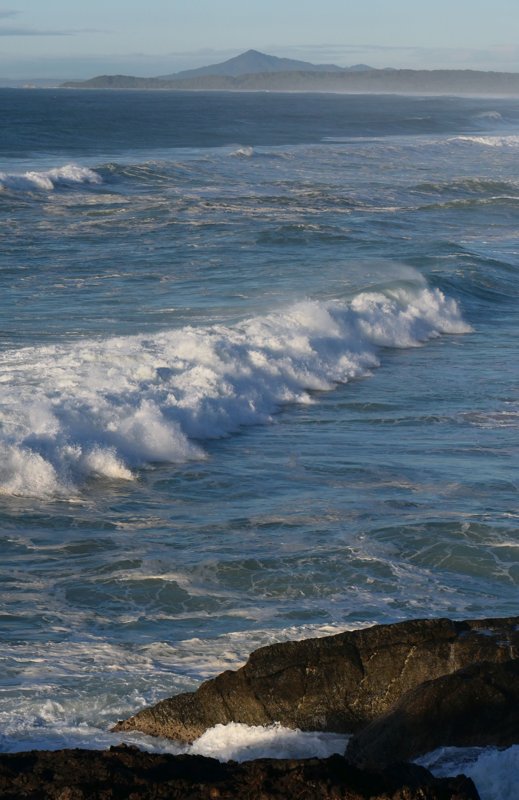 The power hits you, vision, sound, the explosions, the formal momentum. 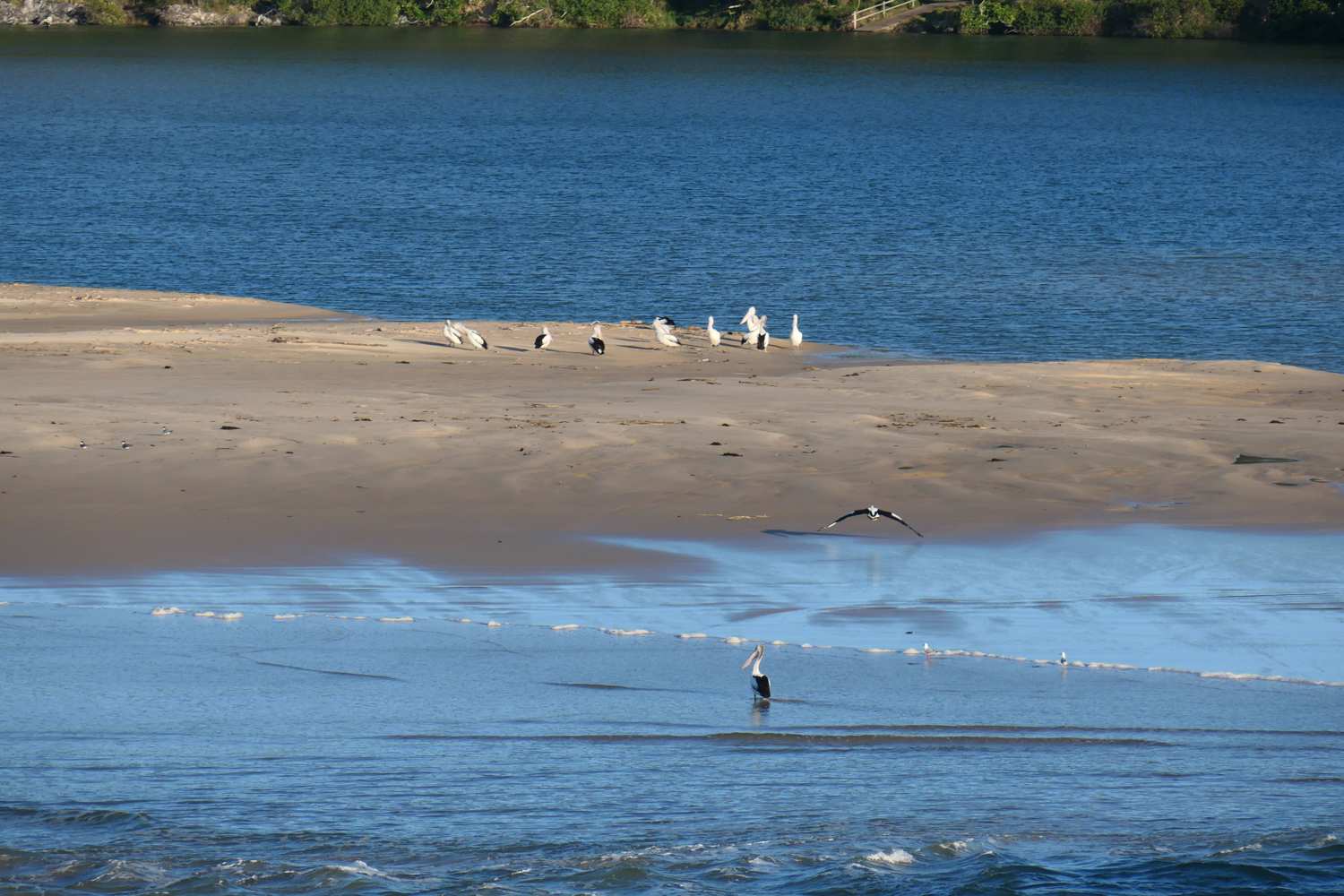 The birds are hard to see, plenty of shadow this early in winter, Black Cockatoos start us off. 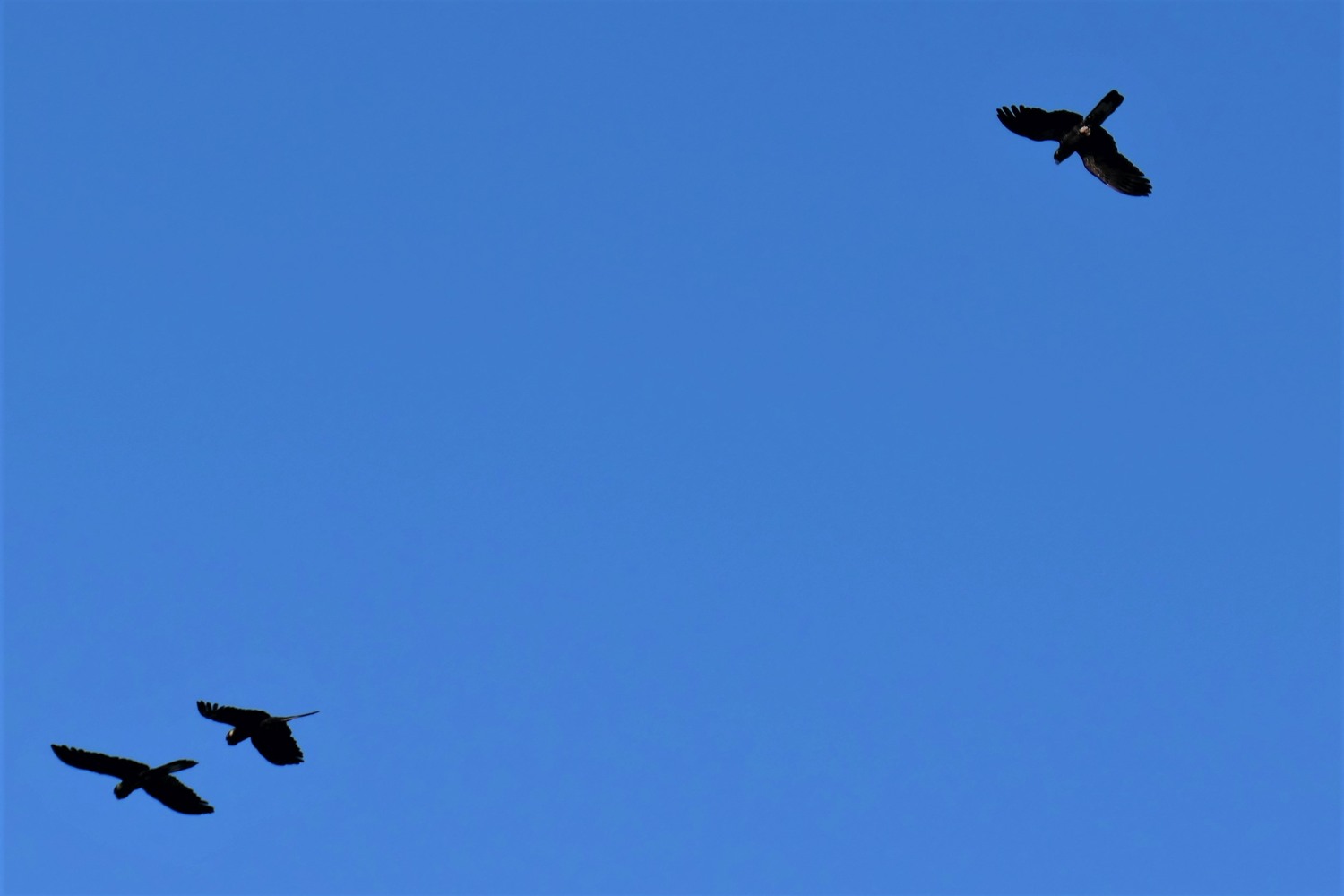 A bird is scraping the earth, glimpses. ‘Whipbird’, I announce, catching sight of a white cheek. A sharp whistle catches me, no idea – Catbird, someone says, sounds nothing like them and they start their usual wail three or four all around us. I catch a glimpse of a couple. They are bowerbirds who don’t bother with the fuss (and artistry) of a bower to attract every female they can. Instead they prefer monogamy, both parents feed and care for their young. 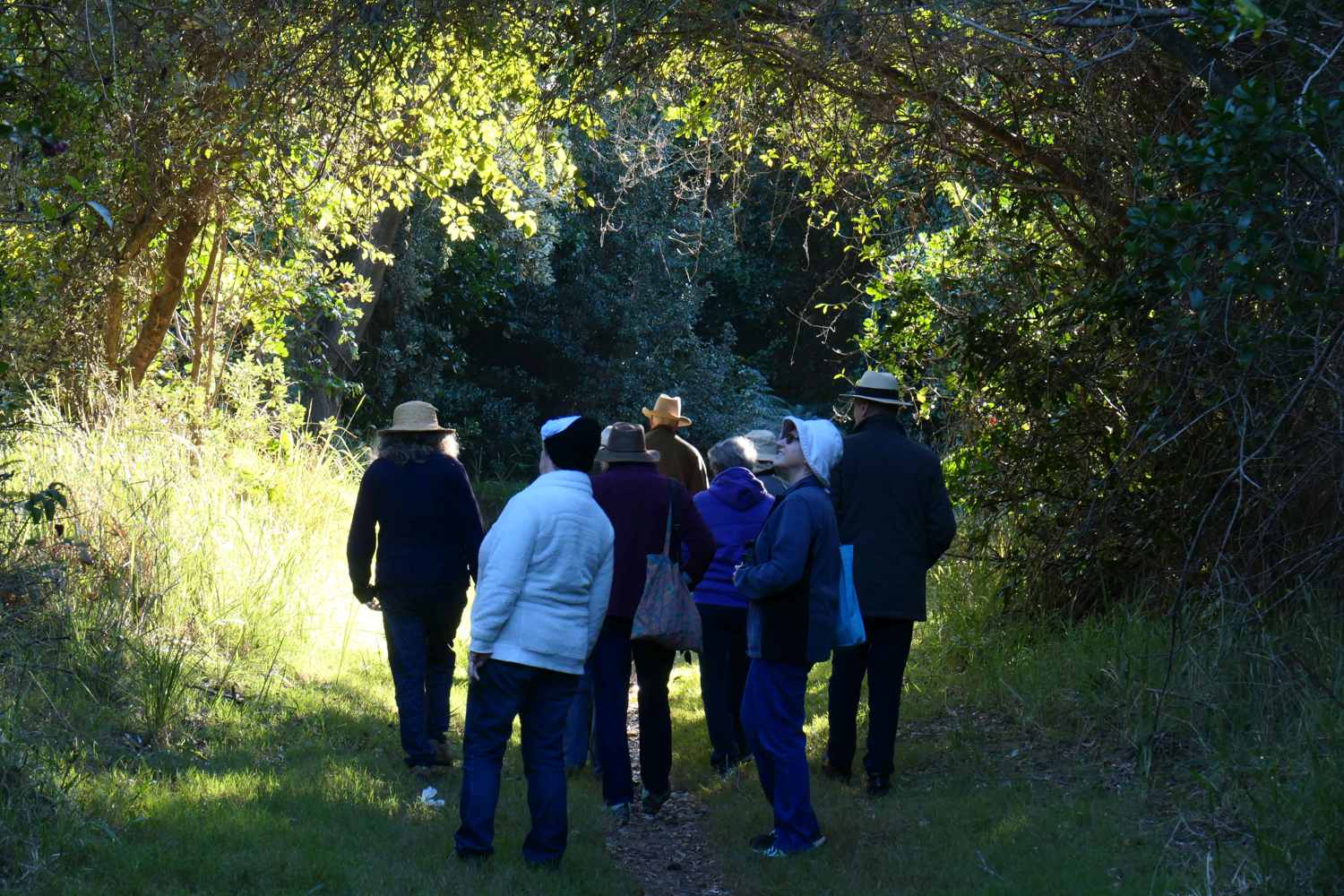 Birds are hard to see, especially early on a winter’s day. 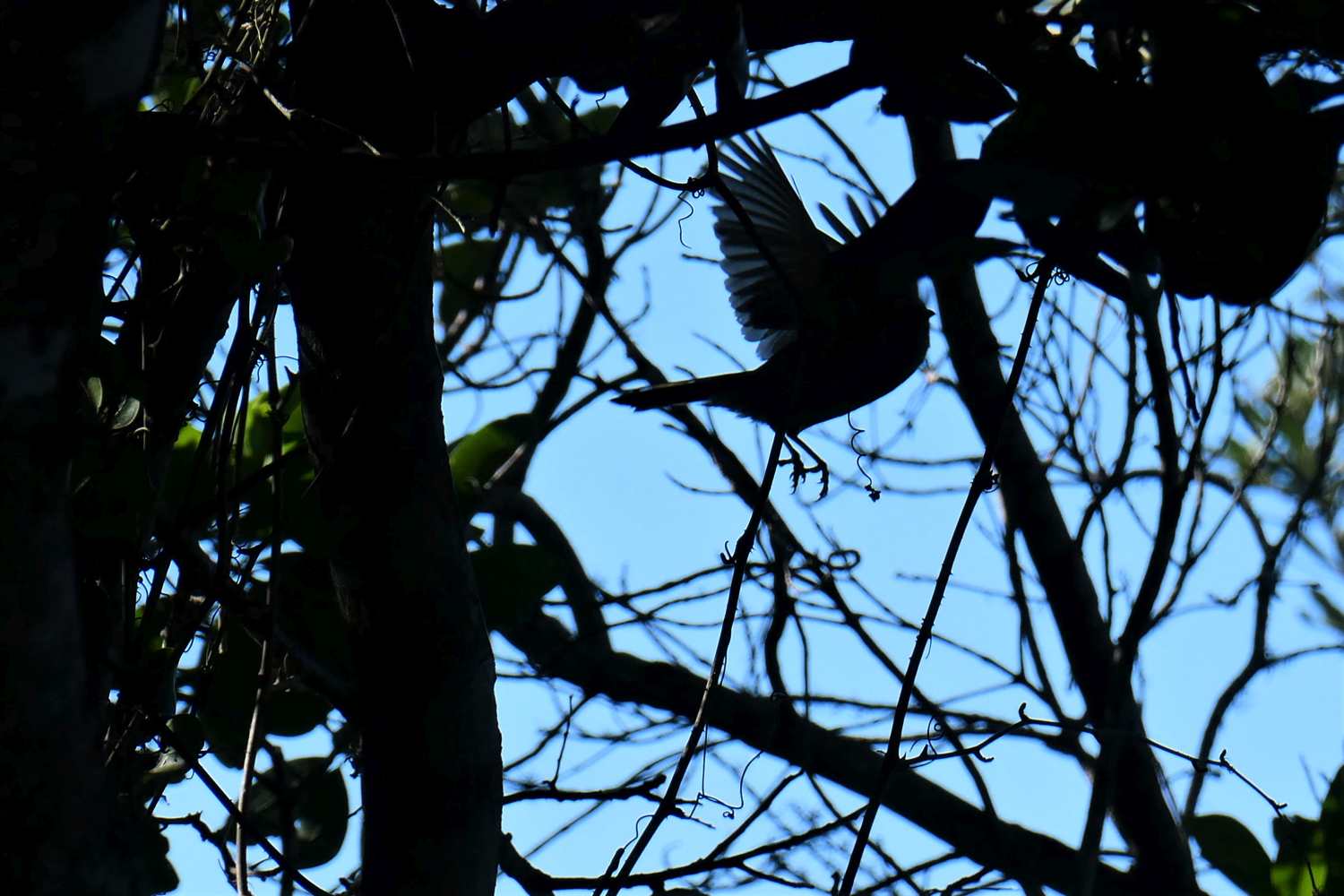 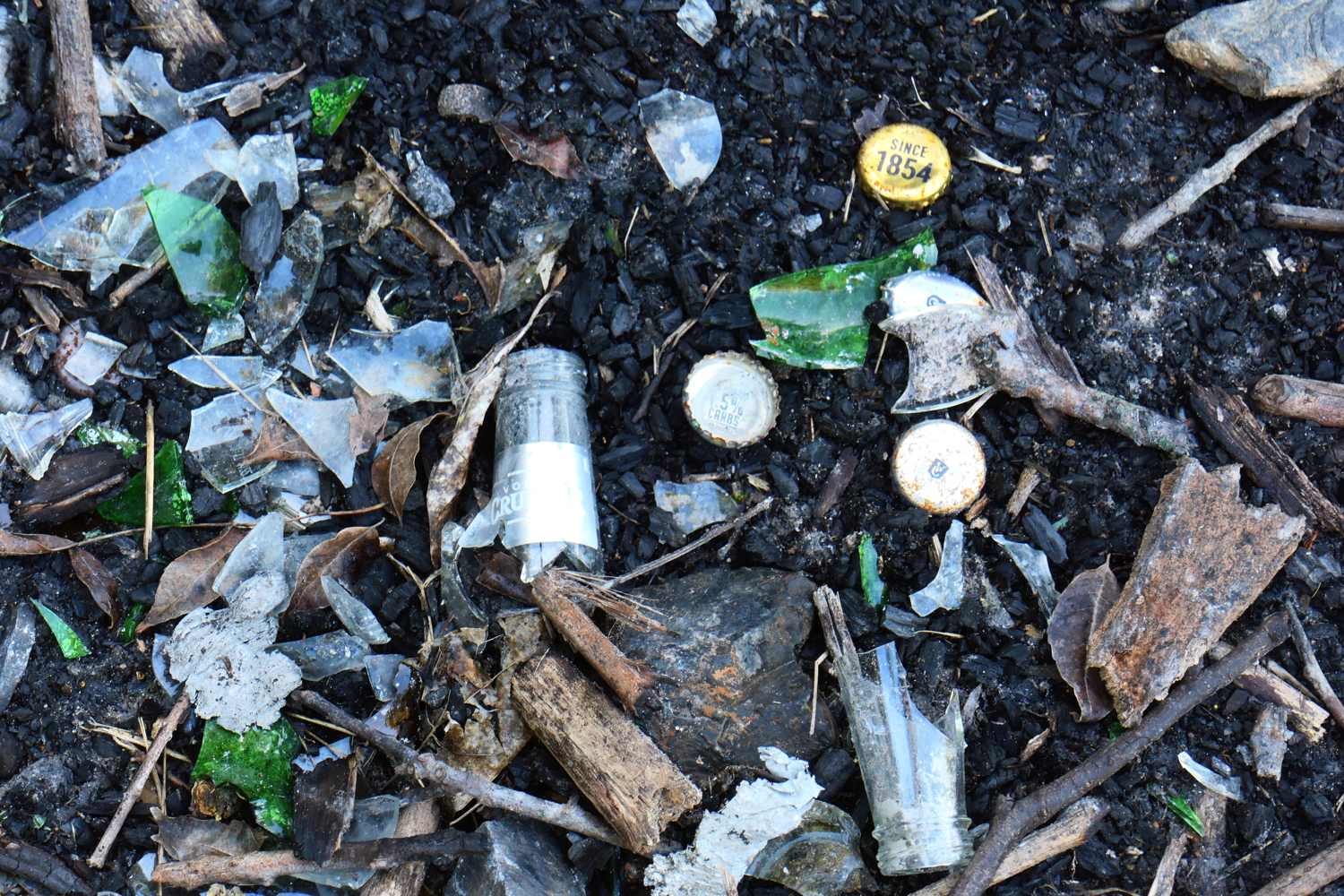 A bird sticking to the side of a tree round here, and not moving, is always an Eastern Yellow  Robin. 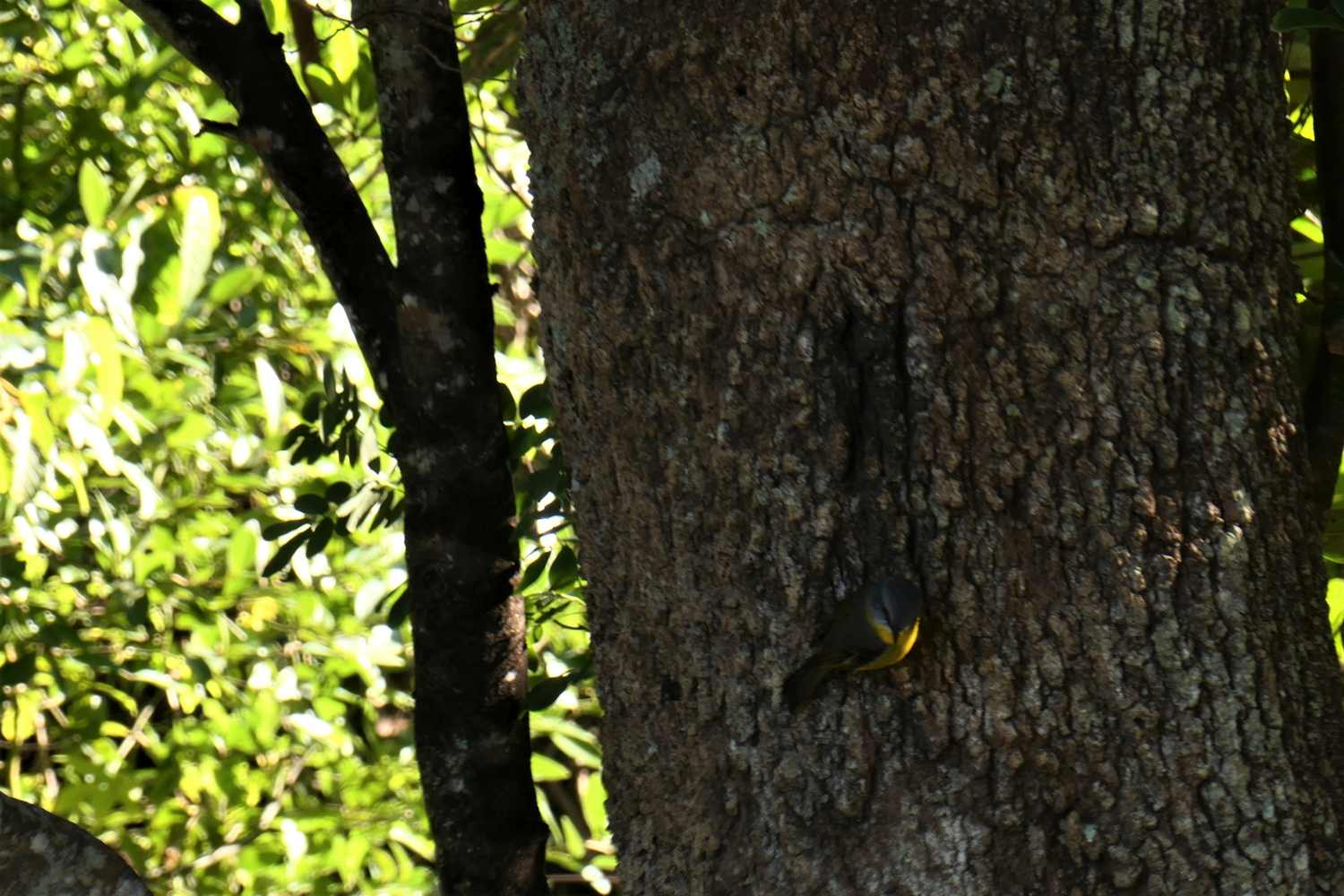 The old sewage pipe has gone. We now have a plinth for a statue. I don’t think there are any to Gumbaynggirr men or women yet. 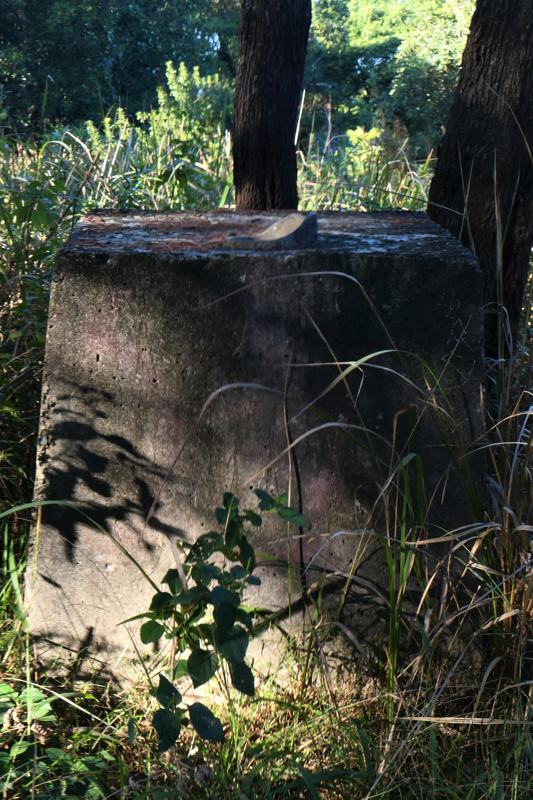 We drive to Dolman’s Point, on the southern side of Sawtell. It’s low tide , but Bonville Creek is brimming from the heavy seas. 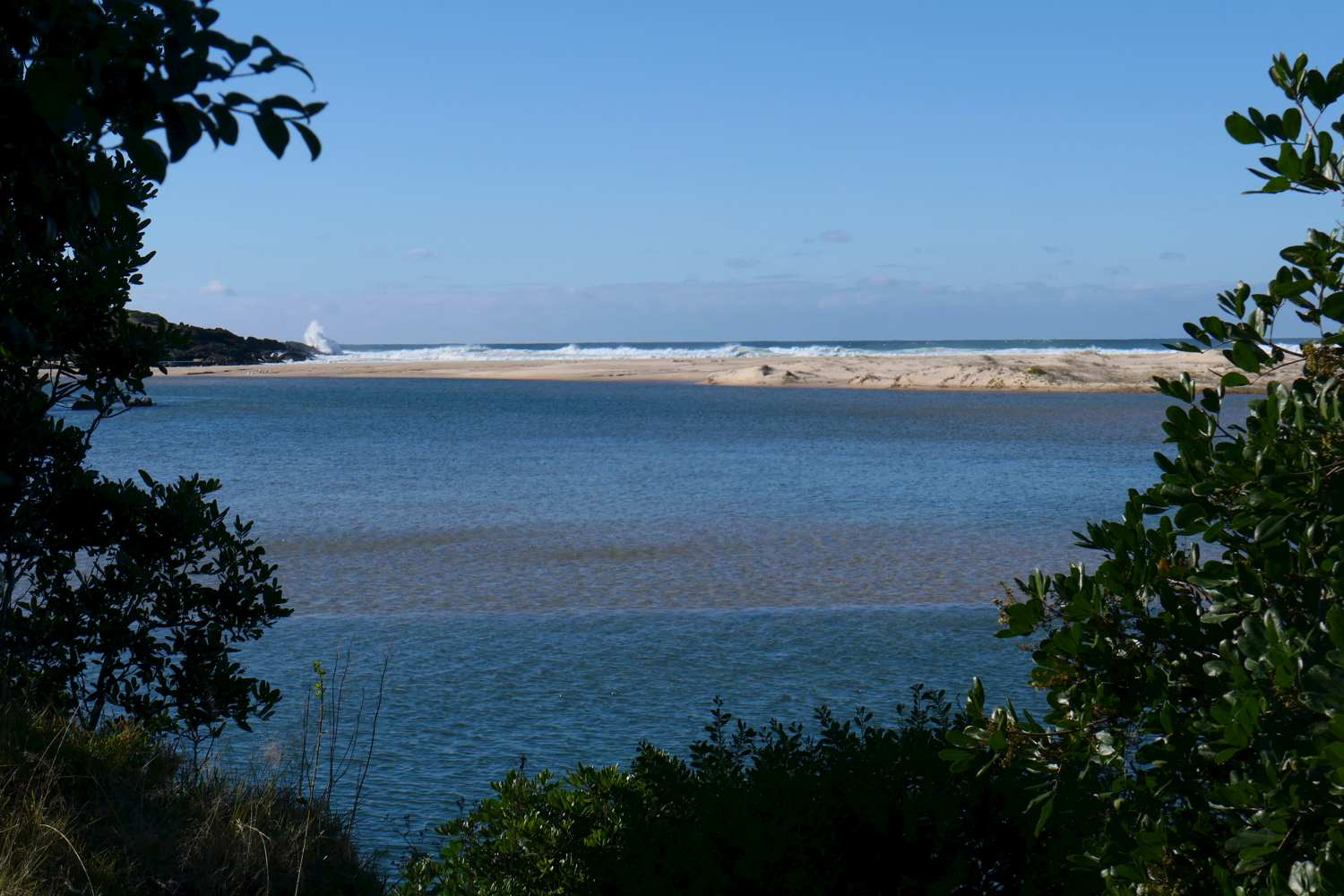 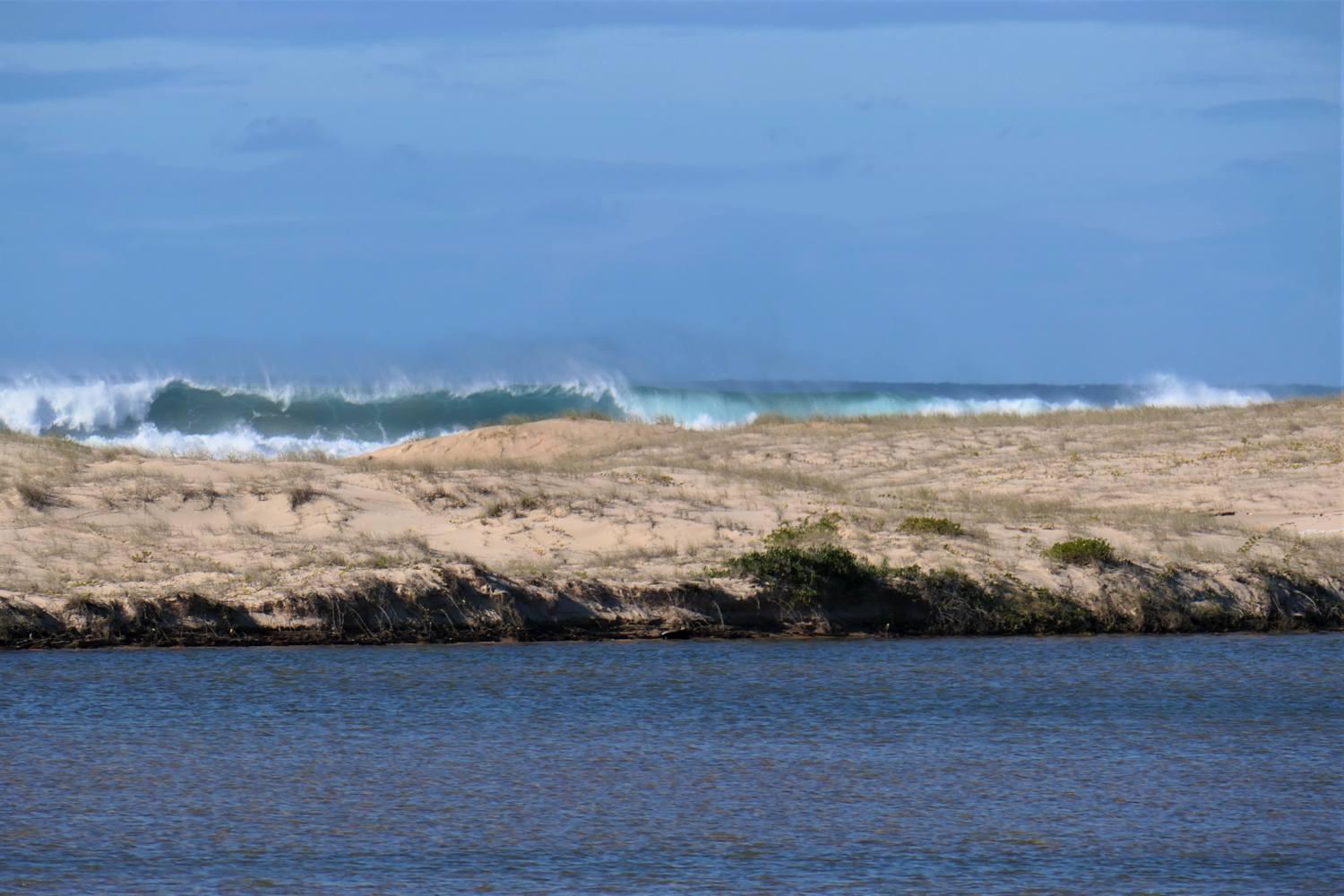 The Pelicans are not worried by the crashing noise just metres away. 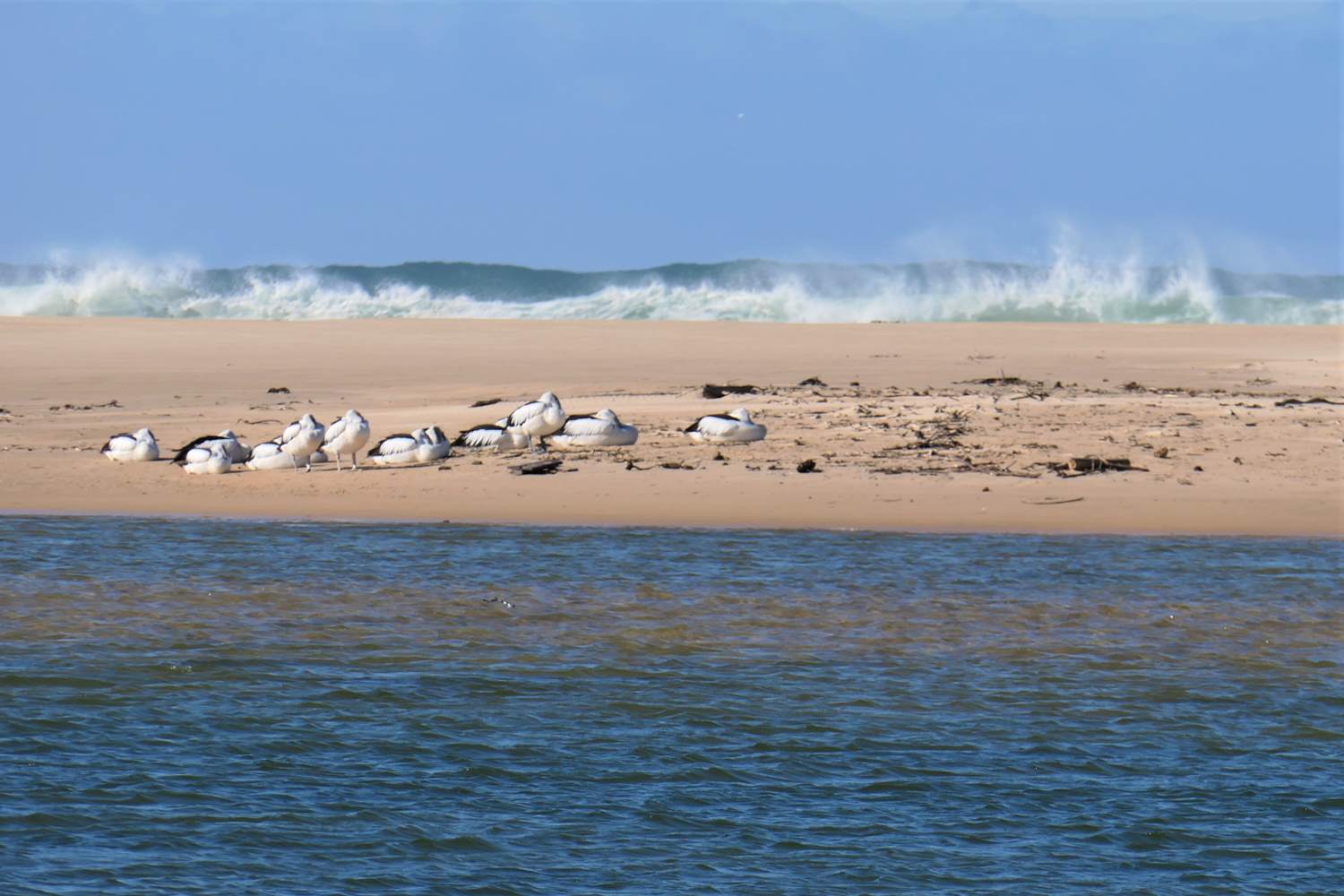 We pass a male Brush Turkey on his mound, sticking his head in a hole then sitting in it. He expends a lot of energy and spends a long time building up his nesting mound and defending it. 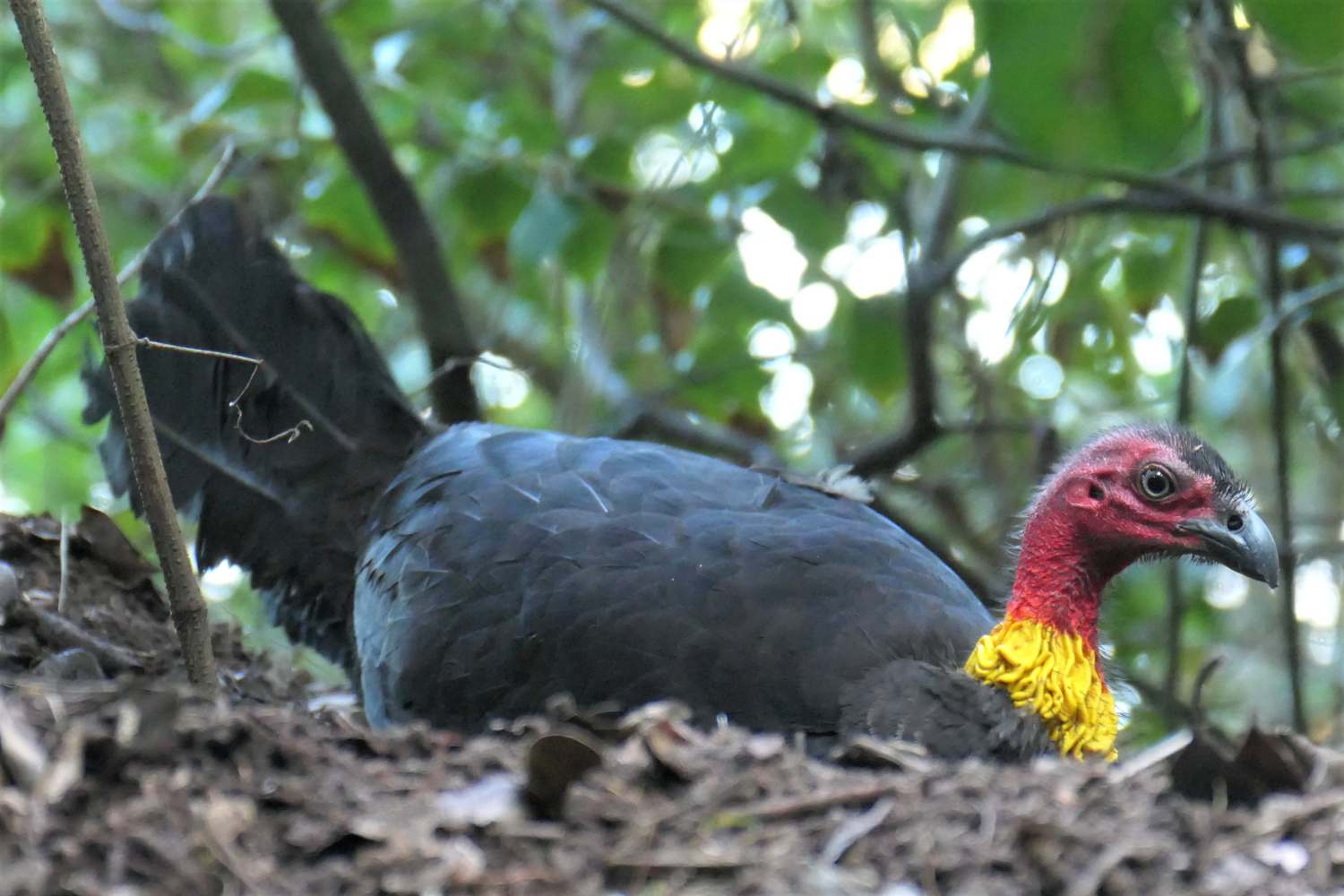 He is readying the mound for breeding which can last six months. He only has a small golden wattle which will grow in breeding time. He will only mate once the centre of the nest is at the correct temperature (33 degrees C), both sexes have very accurate heat sensors in their beaks. The female digs a hole in the mound and lays an egg. 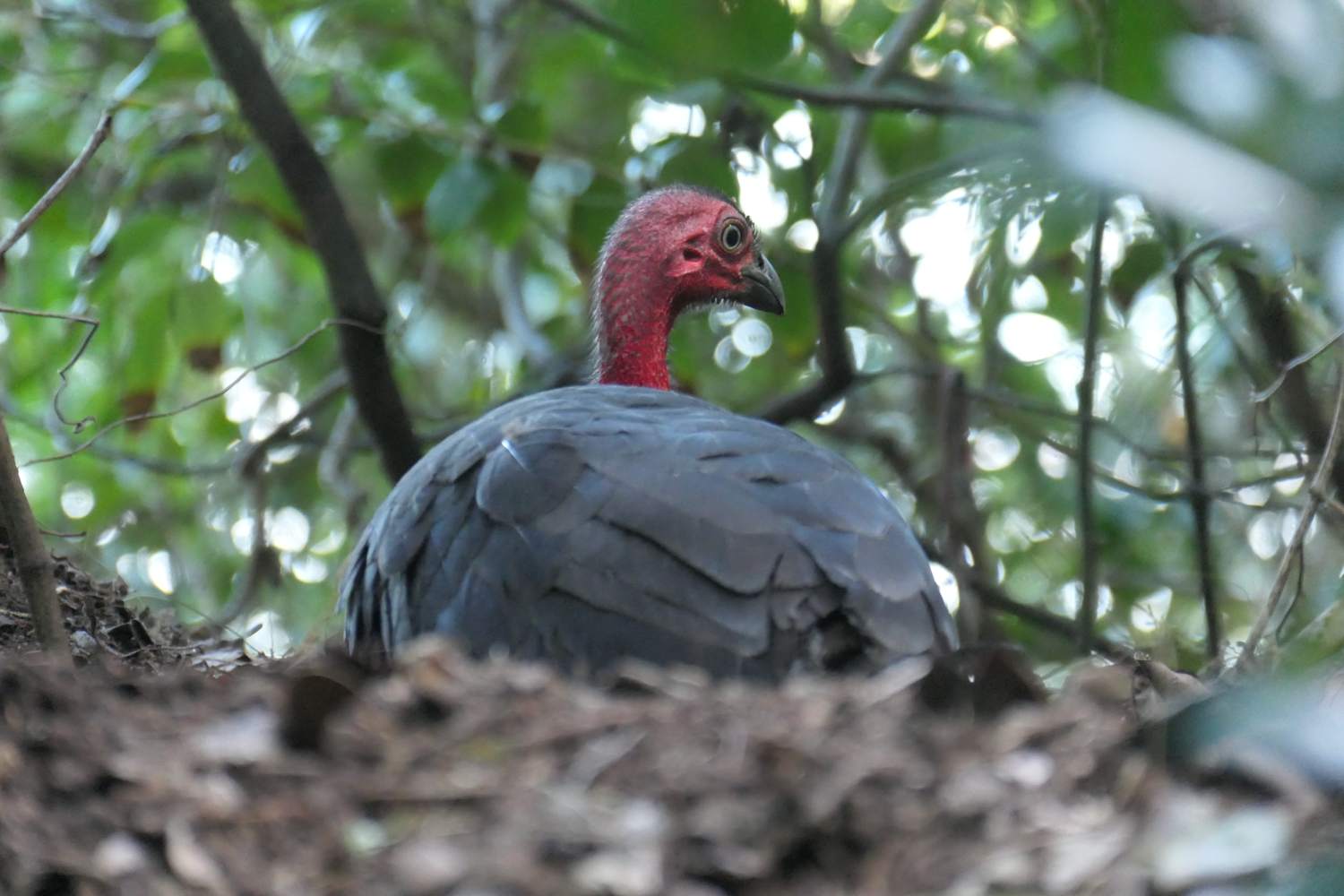 The male drives her off straight away and she searches for another male to mate with and lays another egg in this other mound, sometimes over twenty eggs in various mounds. After a couple of months the eggs hatch. The fluffy chicks claw their way to the surface. Once out in the world, on top of the mound, the adult male immediately kicks leaf litter at his offspring and sends the Brush Turkey toddlers packing. 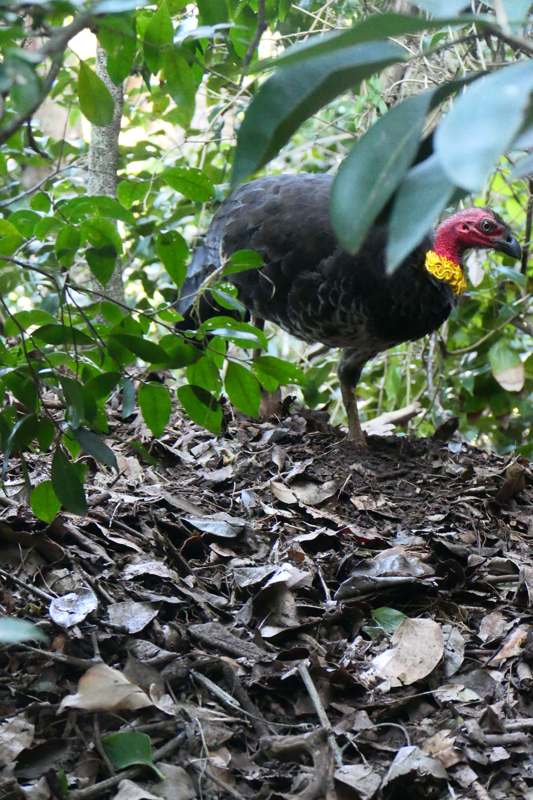 On the way back he was busy warming up the nest, scraping more leaf litter over the mound. I miss a male Regent Bowerbird, black and gold, one of the gems. There is always something to see. 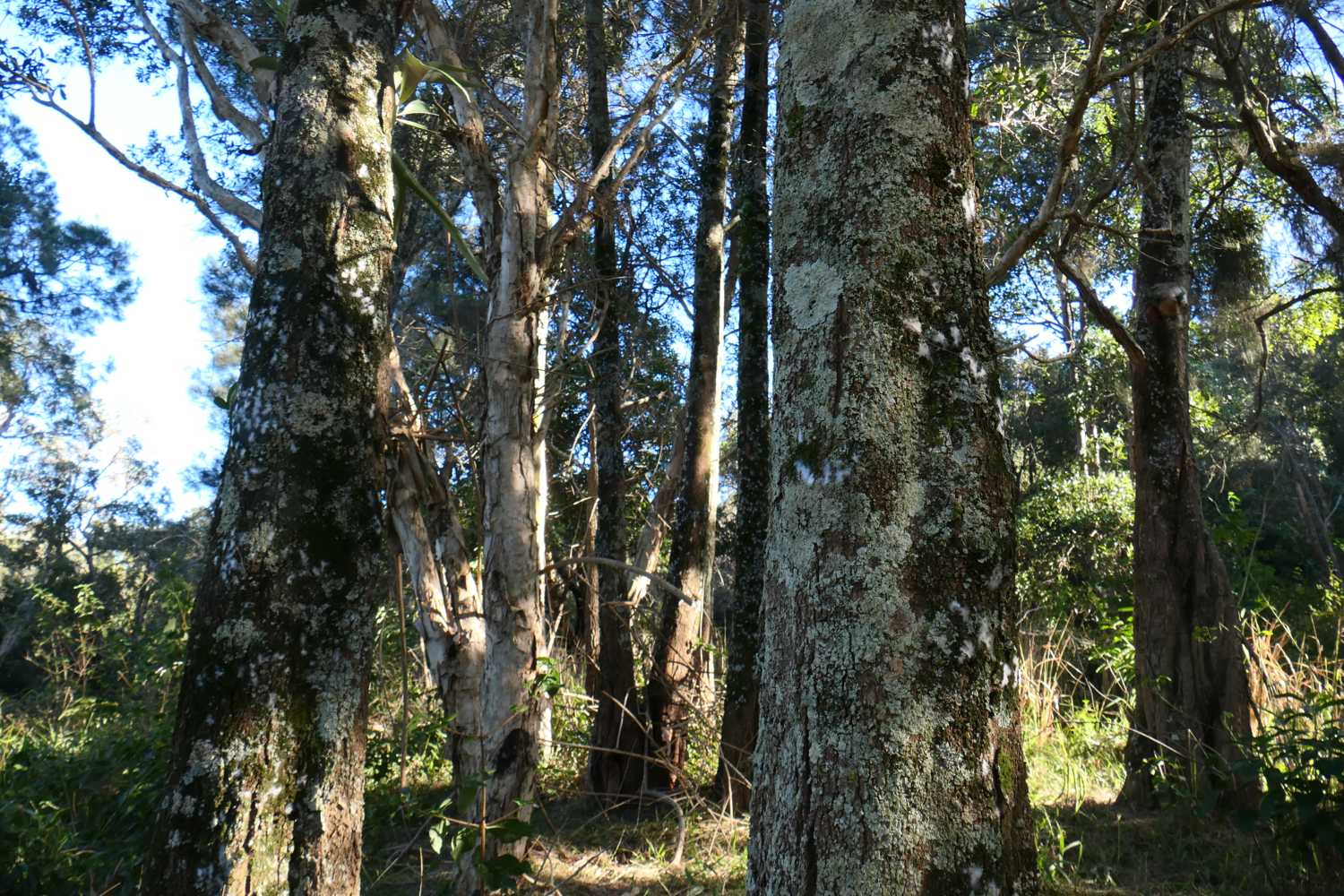 In today’s LitHub, Madeleine Watts quotes Helen Garner defending the diary: ‘As if there were no work involved in keeping a diary in the first place: no thinking, no discipline, no creative energy, no focusing or directing of creative energy; no intelligent or artful ordering of material; no choosing of material, for God’s sake; no shaping of narrative… It’s as if a diary wrote itself, as if it poured out in a sludgy, involuntary, self-indulgent stream—and also, even more annoyingly, as if the writer of a diary were so entirely narcissistic, and in some absurd and untenable fashion believed herself to be so entirely unique, so hermetically enclosed in a bubble of self, that a rigorous account of her own experience could have no possible relevance to, or usefulness for, or offer any pleasure to, any other living person on the planet. [4]

If – ‘A diary is almost always written from a personal perspective.’ And, ‘A diary is a book to record events as they happen. A journal is a book used to explore ideas that take shape.’ Then VIRUS 2020 is a mongrel cross-breed.

May 19 Pepys diary. When Pepys, the great diarist, fears that his life is in danger during the plague (and later the Great Fire of 1666), ‘he defends himself with sexual activity’. (April 15, discusses the diarist Arthur Inman – not uploaded)

Reverend Robert William Shields was an American minister and high school English teacher, best known for having written a diary of 37.5 million words chronicling every five minutes of his life from 1972 until a stroke disabled him in 1997.

Now that we are completely immersed in the worldview most convenient to radical extractive capitalism, we imagine that this is the only way . . . these last few months have taught that humans can change, and change fast, in ways that serve the common good. Kathleen Dean Moore[5]

I don’t mind the occasional repetitive task. I fold up maps to place inside pamphlets for tomorrow’s letterbox drop. 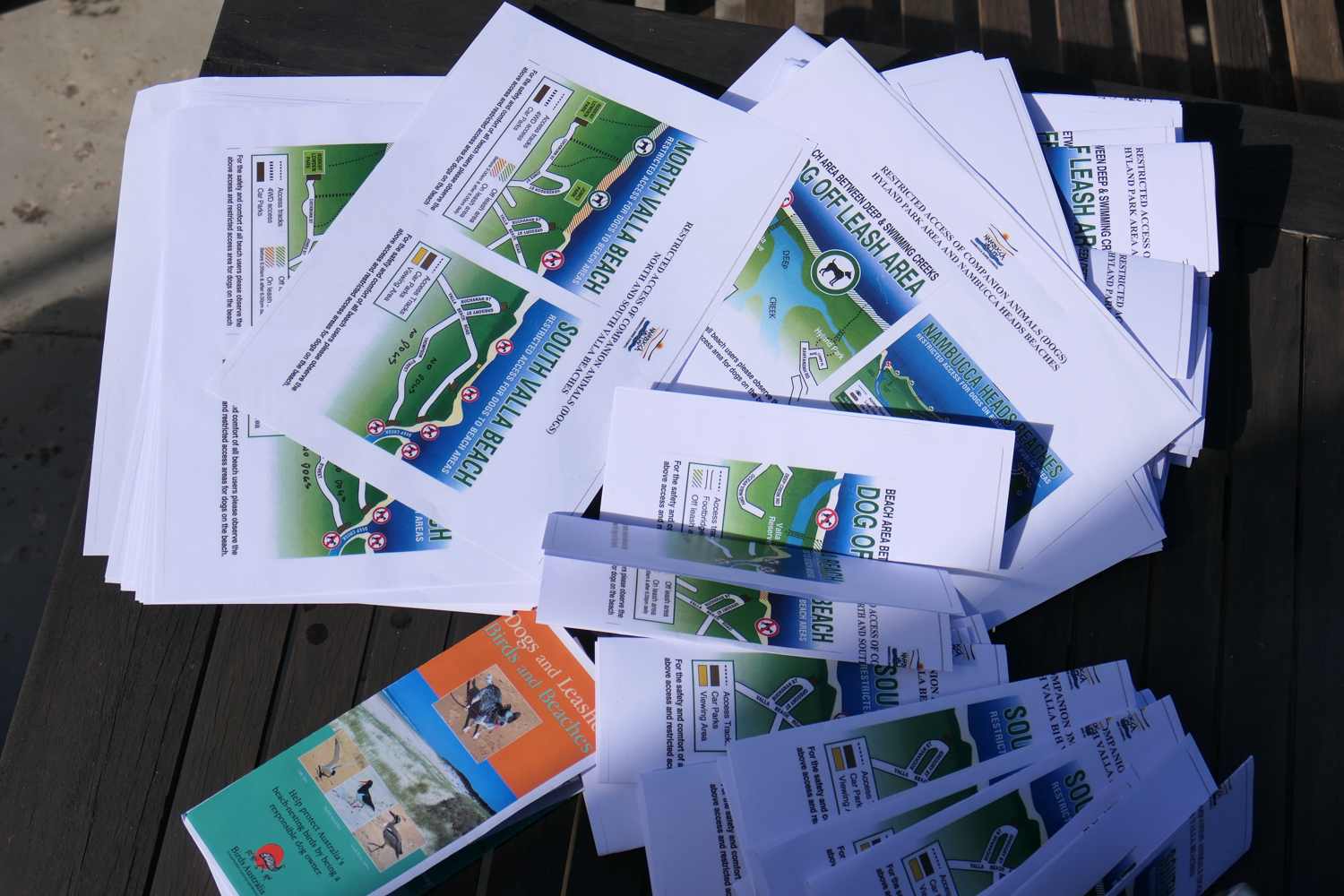 [1] ‘Since Western explorers discovered Antarctica 200 years ago, human activity has been increasing. Now, more than 30 countries operate scientific stations in Antarctica, more than 50,000 tourists visit each year, and new infrastructure continues to be developed to meet this rising demand.’ Rachel Leihy and Steven Chown, The Conversation, 16 July

[2] ‘We share our continent with about 170 species of land snakes, some equipped with venom more toxic than any other snakes in the world.’

[4] Quoted by Madeleine Watts, ‘On the Diaries of Helen Garner and the Quagmire of the Fictionalized Self’, LitHub, July 16, 2020’. She quotes Garner, ‘I mean the dangerous and exciting breakdown of the old boundaries between fiction and nonfiction, and the ethical and technical problems which are exploding out of the resulting gap.’ It is that gap that Garner has been writing towards her whole life, and it is for that reason that the unclassifiable Yellow Notebook might be her greatest achievement.

[5] ‘The View From a Desert Ridge: A Conversation Between Kathleen Dean Moore and Ben Ehrenreiche’, Orion e-Update, July 16, 2020