We undertake a bird survey once or twice a week in this beautiful spot. 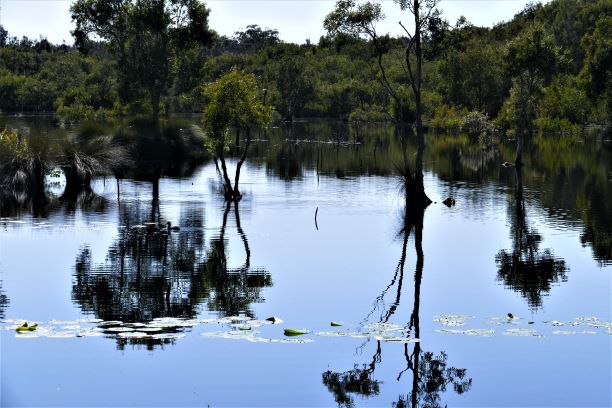 This was an antimony mine and a badly damaged wetland.

From a wetland to the Bellingen Music Festival

We went to three concerts. The first had students from the local conservatorium playing Bartok’s six Romanian Folk Dances, which I hadn’t heard in ages. The middle Horn Dance is very beautiful. Then came the Acacia String Quartet and a world premiere of two movements from A Sundried String Quartet, from a wonderful young Australian composer, Alice Chance. They were exciting and different, followed by Mozart’s K421. Unfortunately, I just don’t find Mozart’s music interesting (apart from Don Giovanni and the Requiem).

Then off to a new local profesional Wind Quintet playing Ibert and Debussy via a church book sale.

Music is a natural part of of our cultural life, but we forget how fragile it is. Look at Syria, Yemen, West Papua. And the environmental crisis looks very likely to cause food and water shortages, which will involve the collapse of governance, perhaps nation states, and what we call civilisation even.

Explorer and pirate William Dampier spent nearly two months in 1697 camped in Karrakatta Bay, yet learnt nothing from the Bardi people. He made racist comments such as: ‘Setting aside their human shape, they differ but little from brutes.’ Dampier was stupid.[i] Music and ceremony are the basis of traditional Aboriginal culture. We moderns have lost ceremony, and music has become solitary not communal, while remaining powerful. It is good to see people making music together. Music is a mark of the civilised.

During a rebellion by Kurds against British rule in the 1920s, as Colonial Secretary, Winston Churchill said: ‘I am strongly in favour of using poisoned gas against uncivilised tribes. . . [It] would spread a lively terror.’ [ii] So let’s abandon the colonial term civilisation (from the Latin civis, ‘city slickers’) with its superiority and racism (vs the ‘barbarians’, first the not-Greek, then not Greek or Roman). Or strip the term of temples, art, bureaucracy and machinery, and rebrand it as generosity, being civil to each other and all other creatures.

Culture is something we do, it is at heart experiential. The anthropologist Clifford Geertz views culture as expressive and performative, a system of meaning making irreducible to other systems. He writes: ‘If we take, say, a Beethoven quartet as a sample of culture, no on would, I think, identify it with its score, with the skills and knowledge needed to play it, with the understanding of it possessed by its performers or auditors, nor  . . . with a particular performance of it or with some mysterious entity transcending material existence… But that a Beethoven quartet is a temporally developed tonal structure, a coherent sequence of modelled sound – in a word, music – and not anybody’s knowledge of or belief about anything, including how to play it, is a proposition to which most people are, upon reflection, likely to assent.’  [iii]

But culture is precarious, dependant on fertile living conditions.

And for lunch went to see a couple of friends playing classic jazz in the Bellingen Big Band. Hottest day for us so far 34.4 C.

Now we are in the slow apocalypse of the Anthropocene. In a fast one, as seen in the current fad for zombies, the infrastructure, water, power then buildings and roads would disintegrate quickly. Food would be a major issue. [iv]

Paul Kingsnorth has laid down, The Eight Principles of Uncivilisation which seek a new way forward abandoning the anthropocentric myth of progress. For example, Principle 7 reads: ‘we will not lose ourselves in the elaboration of theories or ideologies. Our words will be elemental. We write with dirt under our fingernails.’[v]

We head back home for the AFL Grand Final – which soon became lopsided and very disappointing. Very few of my friends like sport. In fact most despise it. Why? In her book Deep Play, Diane Ackerman takes the imagination of ten women in the arts, religion, sport and nature energised by wonder to uncover the enchantments of deep play. She calls herself an ‘Earth Ecstatic’.

Johan Huizinga states that play among other things, is accompanied by “…a feeling of tension and joy, and the consciousness that it is different from ordinary life.’ [vi] This absolute submission of the self to the rules and the goals of the game might lead to what is termed flow-experience. [vii]

Bernard Suits shows that intrinsic values is games and sport are often realised in the process of pursuing goals rather than in obtaining the goals themselves. The goals of a game are intrinsically trivial, for example, using a stick to push a ball into a hole, so what is achieved in the process of reaching such goals must be the source of their intrinsic value, the skills, teamwork, tactics, preparation, hard work, luck etc. [viii]

And yet, witnessing a moment of technical (or tactical) brilliance can be transcendent. David Foster Wallace recommended watching Federer at Wimbledon and you may well have what a press bus driver called a ‘bloody near-religious experience’. ‘It may be tempting, at first, to hear a phrase like this as just one more of the overheated tropes that people resort to describe the feeling of Federer Moments. But the driver’s phrase turns out to be true — literally, for an instant ecstatically — though it takes some time and serious watching to see this truth emerge.’ [ix]

There is no sport without rules, rules make the game but often there are grey areas, rules can be bent, and then there are codes of fair or acceptable play which underpin the rules. Sport can exemplify the camaraderie of a group in a team sport or solitary struggle. The thrill of a close win, despair of defeat command the passions in ways we are still exploring.

After the Grand Final we went to a group opening at Artspace Urunga where Wyn is showing her beautiful natural work.

Political action is crucial, and so is practical action, but democratic societies are currently all capitalist, inherently geared towards production and consumerism. Change to a society more concerned with the future and wellness of citizens and the plant requires a critical mass of people to urge change. As individuals we can’t solve the crisis, but a fundamental shift from negativity, from what we must do to what we want to do a positive framing. If we get to know nature better, we will come to appreciate, respect and even love it. Then our actions and attitudes will, with informed information and support, will lead towards sustainability and conservation and doing the right thing. It is a way of getting people actively involved, a path to civic environmentalism. Natural aesthetics is a positive step towards restoring these lost connections, necessary for the health of the planet, our society and ourselves. Bu which I mean both aesthetics of art with a capital A that references to or makes use of natural materials, representations and processes; and the experiential natural aesthetic of being in a natural environment.

Art is pervasive and irrepressible, but from the 15th C, art in the West no longer mediated between the sacred and material worlds. And now art is losing interest in its more recent role of mediating between the natural and the cultural worlds. Now we have to consider art from a sustainability point of view. Wyn’s show uses native inks she makes herself – art is a process.

Finally back home for a rugby league preliminary final, a dour, tough struggle, with young men giving everything they had in terms of effort, skill, heart.

[i] Though, ‘Dampier’s journals show he initially described Aboriginal people with some admiration, and the derogatory words were written later under the influence of his publisher to reflect popular attitudes and improve book sales.’ Ben Collins, ‘How explorer and pirate William Dampier’s comments on Aboriginal people in 1697 set the tone for future sentiment’, ABC Kimberley, >>

[ii] Samuel Osborne, ‘5 of the worst atrocities carried out by the British Empire. A YouGov poll found 43 per cent of Brits thought the British Empire was a good thing, while 44 per cent were proud of Britain’s history of colonialism.

[iv] If you could commandeer (and defend) an average sized supermarket, it could feed you for half a century. Lewis Dartnell, The Knowledge: How to Rebuild Our World from Scratch, Penguin, 2014.