There may be up to a thousand species of cicadas in Australia, and most not yet named by scientists. 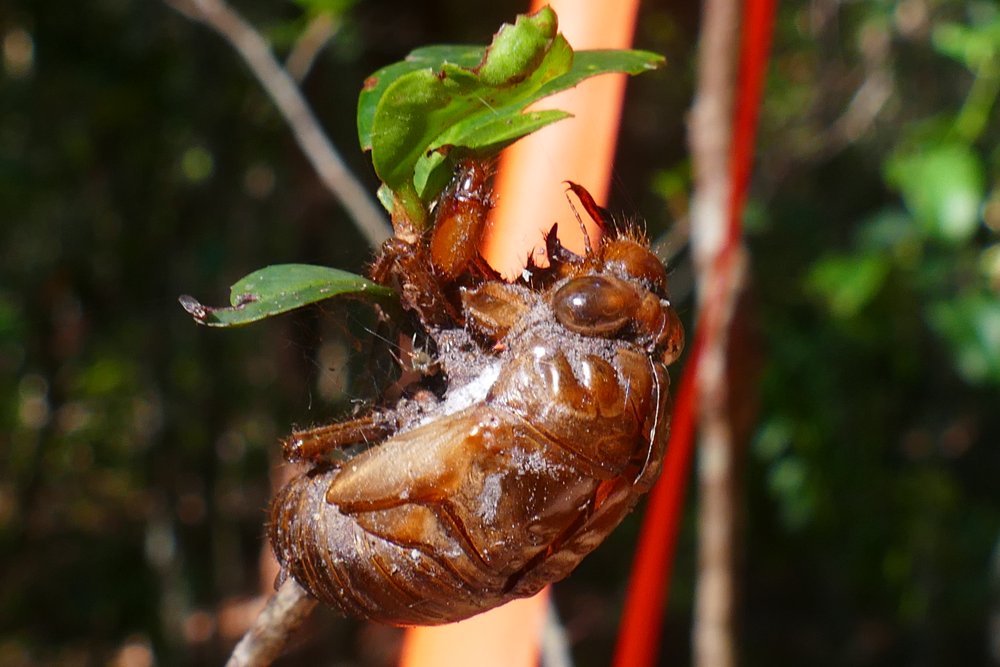 This one has, as a background, red tapes we use for transecting Jagun Nature Reserve for our monthly bird survey. December was down in numbers probably because of these noisy insects. Their songs have been praised by poets, but we have Double Drummers, the loudest insect in the world, and they can hurt the ears.

Esteemed you are by every human
As the summer’s sweet-voiced prophet.
Muses love you, and Apollo too,
Who’s gifted you with high pitched song.
from the Anacreontea, a collection of ancient Greek poems.

In one of Aesop’s fables, a hungry fox tries to lure a singing cicada down from a tall tree by by flattery. ‘Show yourself, so I can see how you make such music with your tiny wings’, the fox calls out. But the cicada has seen wings like his in the mouth of a fox and so sends a leaf spiralling down and watches the fox ambush it. Of course the sound the males make is not from wings but tymbals, a membrane with ribs that buckle against each other hundreds of times per second.  The females respond by snapping their wings.

Then the cicadas again like kindling that won’t take.
The struck match of some utopia we no longer remember
the terms of—
the rules. What was it was going to be abolished, what
restored? . . .
Jorie Graham, The Errancy

For more on Australian cicadas here is a link to a 2015 ABC radio program.

The Curious History of the Still Life genre