‘Share your poem to join the lineup at AGNSW’ was the spiel for the poetry competition – ‘Take ekphrastic inspiration by responding to Olive Cotton’s The photographer’s shadow (1935).’

I found out today (Dec 10 about six months later – by chance) that Maddie Godfrey had won with the poem, ‘I Grew Up A Shadow Girl, With A Man Outlined Inside Me’. It begins, ‘When I was fifteen and wanted so badly to be anything’/ but girl . . .’ It is a poem about an important subject long neglected. And Maddie Godfrey makes a good point, ‘a successful Ekphrastic poem must exist without the artwork, just as the artwork continues to exist without the poem.’

Since it was to be performed at the AGNSW, and I presumed in front of her amazing photograph – I wanted to write a poem that conversed with the image, and with the work of a woman battling to succeed in a man’s world. 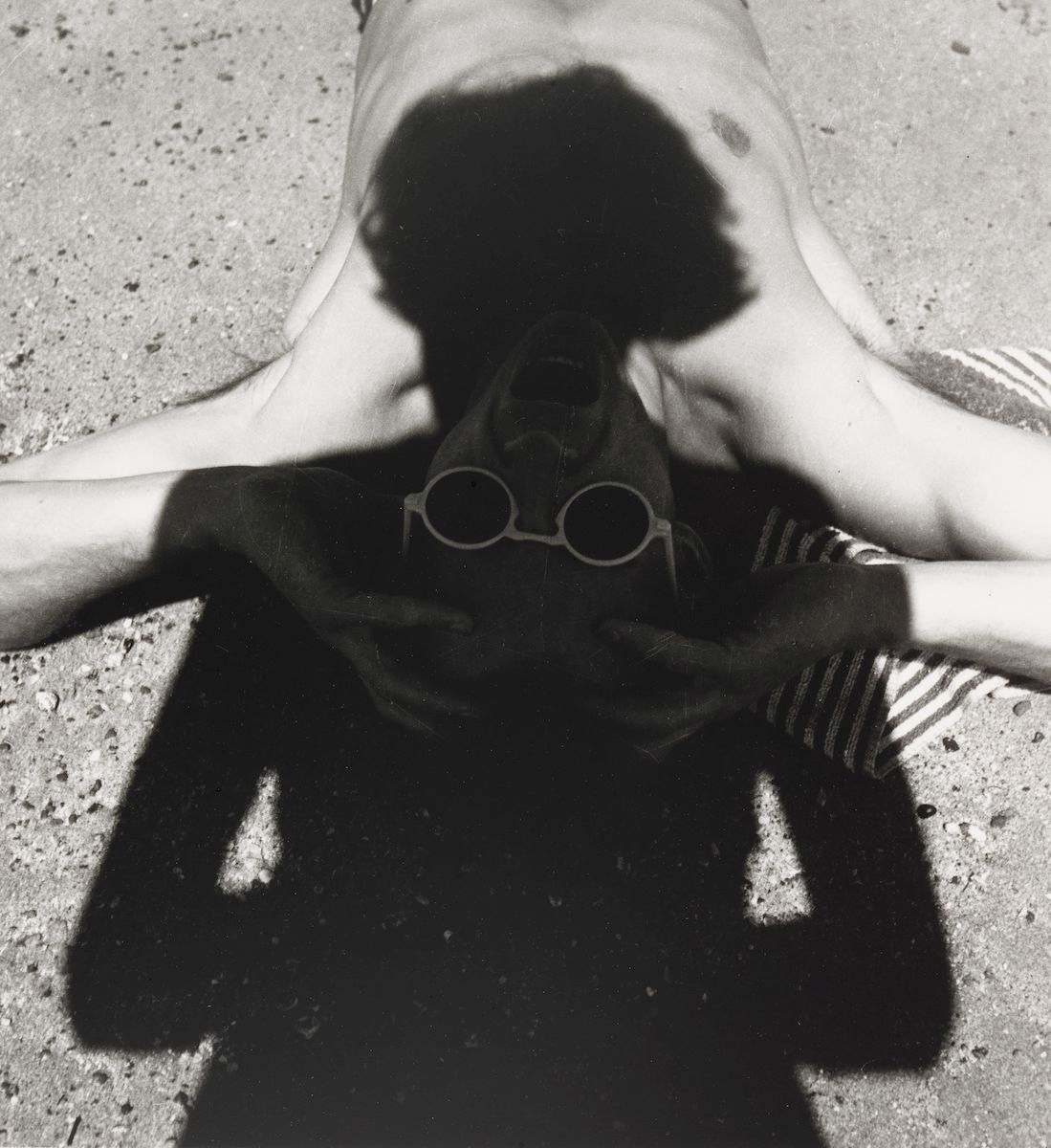 Here is my effort in any case, perhaps too prosaic, too much information, a tribute when I come to think of it, to a remarkable woman and artist. I wanted to celebrate a marvellous photograph, my favourite of hers.

I sense her finger crouch, a waft of excitement, tempered
by darkroom apprehension. At first, you would prefer the heads
to align, but that would probably appear too contrived and lose
both Janus and that touch of Bresson’s decisive moment.

‘I don’t believe it’, shouts Max, hands on his head, or mimes
Munch’s Scream in a compact composition, flat origami,
lines and blocks in graded shades. Becoming familiar
with this chemical romance I’m sure this moment took time.

Her arms are sculptural, symmetrical, grounding the image
and they echo the relaxed arms of her model and lover,
her stand-over tactics prevent her nestling in his arms.
Max flops on his back, repetition with diverse consonants.

The gym body is now ideal but she muddies his torso,
doesn’t care to crop a swatch of swimming trunks
teasing an everyday aesthetic, ordinary glimpses
stretching time and place, if only we paid more attention.

The subjects are well known, well, hardly subjects, they float
through history, voiceless and paper dry in this brief eclipse
yet we share their vast circumstance of sky, heat and jaunty light,
the silver presence of the gulls, our noisy abrasive ocean.

One figure prone on earth grain, one ghost in negative radiance,
heads dead centre of the body, ephemeral . . . Have we become
too focused on images? Ekphrasis has been inverted.
100 million Instagram posts shared daily need more poetry.

Look between your legs. Go on, upside down, as blood rushes
to your visual cortex a giant locust hovers and a man vomits
an unkempt beard thirsty for play, surreal, artistic and ridiculous.
Have you decided? Scream or laughter? Rabbit or duck?

We can’t control what we see, mortality, scraps of beach-towel,
one vague nipple. Saccades give the game away. Men go for
the eyes then the erogenous zones, improvising love and eros.
They both loved shadows, increasingly rare phenomena.

If you need a narrative this moment passed, their shadows stretched.
They left and went home for dinner. The country went to war.
Olive left Max for a new husband and his farm near Cowra, and
for children, isolation and poverty without electricity or water running.

I feel sad because the marvellous career of the photographer Olive Cotton
kind of stopped . . . she married another guy and moved to the country.
Shaune Lakin, curator

I was very happy, I loved the space and freedom. I never regretted coming here.
Olive Cotton