Clifford Possum Tjapaltjarri & Tim Leura Tjapaltjarri ‘Warlugulong’ – one of the great paintings anywhere in the world. 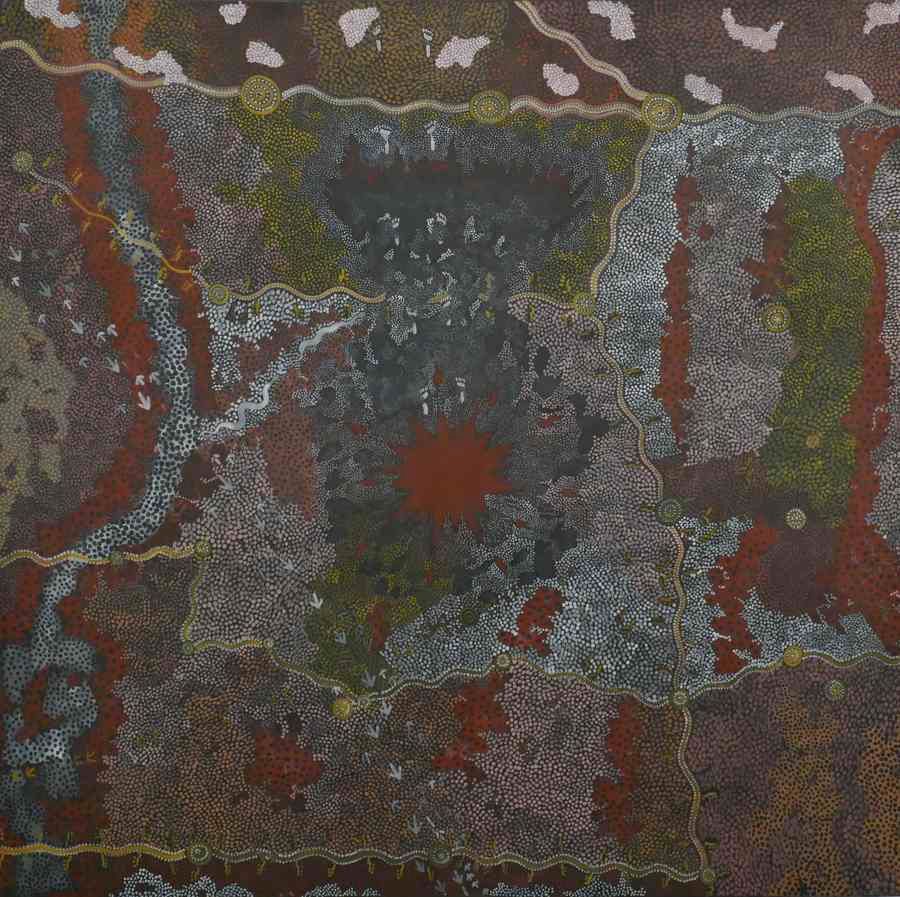 I first saw this (or took notice of it) at the ground-breaking ‘Papunya Tula: Genesis and Genius’ exhibition, Art Gallery of New South Wales, 2000. It is a painting from 1976 that sucks you in, not to its red centre, the great fire, but its stories and movement throughout the canvas.

From the ‘Papunya Tula: Genesis and Genius’ exhibition catalogue:

Warlugulong is the site where the great fire began.

Lungkata, the blue-tongue lizard man, had rested at this site. His two sons, following behind, speared a kangaroo, cooked it, and then greedily ate it all. The father, wondering why his sons were so long, suddenly sensed what had happened. Determined to punish them, he blew on a fire-stick until it glowed, then touched it to a bush. The bush exploded into flame (as the painting illustrates), then burnt everything in its path. Tongues of flame flicked out, as do all lizards’ and snakes’ tongues to the present day, and soon the two brothers were fighting the flames. 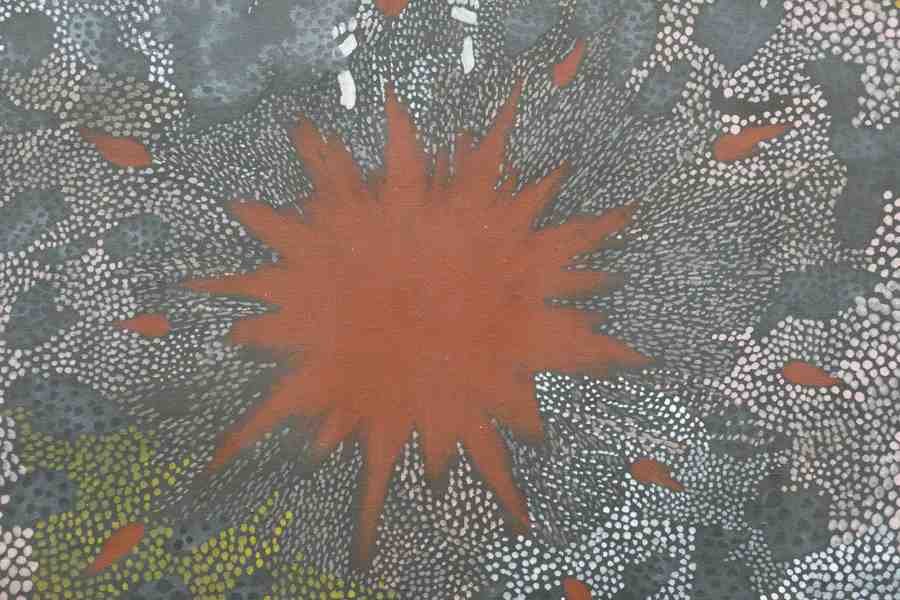 They broke branches and beat at the fire, but always the front leapt beyond them, forcing them back, as the tracks indicate. Far to the south they perished, going into the ground as the bushfire lost its fury and died.

Lungkata and his two sons reside at the site where the fire began, nearly 300 kilometres north-west of Alice Springs.

All mythological events are ‘larger-than-life’ – more intense, more devastating, more uplifting, more heroic – and yet are related to it. Just as the bushfire was so devastating, so the dreamtime storms were all derived from a ‘storm to end all storms’. The trail which begins on the uppermost edge of the painting shows how the Rain Dreaming came from Kalipinypa, far to the west. Here the wind blew, the dust clouds scurried and billowed, and then the lightning man, ‘boss’ of the storm, struck. He lashed the storm into a furious deluge. The rain poured down, running over the ground, filling the rockholes, flowing out until it formed a creek and a sheet of water flowing over the earth. And then the storm travelled east, creating more claypans and rockholes on its way.

Near Kerrinyarra, a large mountain 240 kilometres north-west of Alice Springs, a long line of claypans runs, fringed by tea-tree scrub and sandy country. This country, home of an enormous snake, is depicted on the left-hand side of the painting. When the great rains come these claypans fill, and form an almost unbroken line nearly twenty kilmetres long: the mythological snake is believed to have stirred, and may lurk in the waters ready to attack those who do not respect his power. 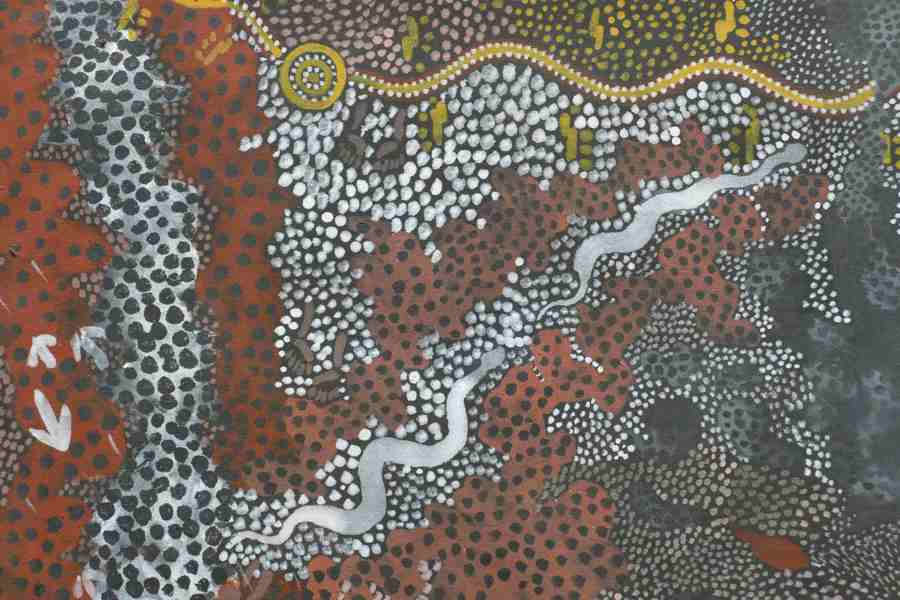 Two carpet snakes are depicted as travelling north from this ‘lake’, and yet another pair of carpet-snake men travelled on the lower route which traverses the entire painting. Coming from the vicinity of Hooker Creek (Lajamanu), some 1000 or so kilometres north-west of Alice Springs, they travelled the country, calling people together at various places to instruct them in the performance of ceremonies. Each small set of concentric circles marks a place where the ceremonies were held, an identifiable location to the present day as with all such sites depicted in the painting – Nyamala-ungar-angutja, Yunkurru, Takarilla-buntja, Arrungaputa, Takara, Aruakuna, Arrangi; the place names run from the north to the south over a vast stretch of country. 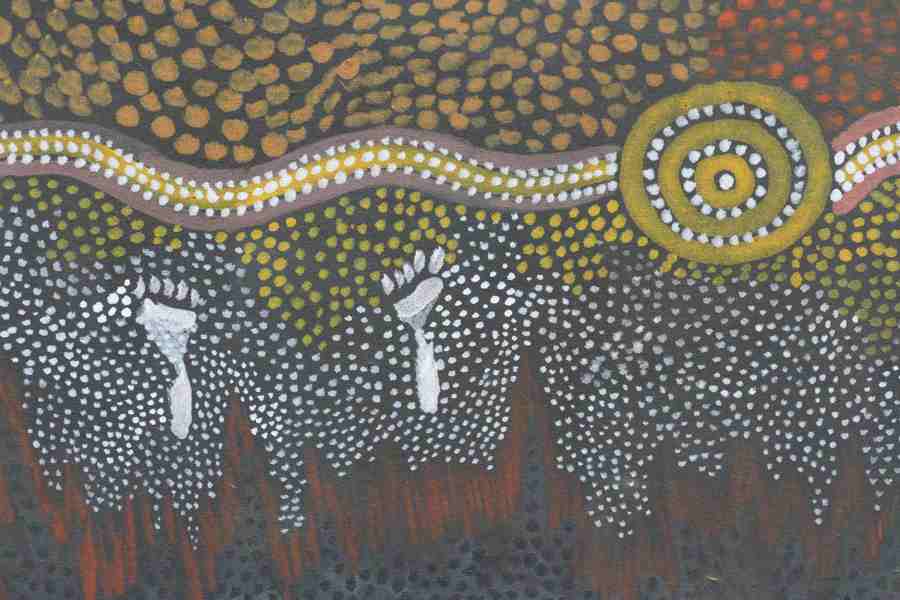 Similarly, the uppermost transverse route is that of Yarapiri, an enormous snake who, travelling from Winparrku (a sacred mountain over 300 road kilometres to the west of Alice Springs), made many features of the present landscape as he travelled north into the Tanami Desert, far to the north-west of Alice Springs. The white blotches near the edge of the painting indicate that he passed through limestone country.

Mythological storms such as that which began at Kalipinypa are usually associated with water-birds at the claypan ‘lakes’ and rockholes, regrowth of plants and therefore of vegetable foods, and activity by mythological people and animals. Thus two women of the Napanangka subsection (each shown by one footprint) are indicated as travelling from Pikilyi (approximately 380 kilometres north-west of Alice Springs) in a southerly direction; these women were dancing, celebrating the prolific fruit and vegetable foods, and from far in the east, in the vicinity of Aileron (near Alice Springs), other women came. The sets of footprints are shown to the left-hand sides of the painting, their moves towards convergence showing that later they met and held women’s ceremonies which were very happy ones.

The availability of grass and plant-foods is implicit in at least two other aspects of the painting. 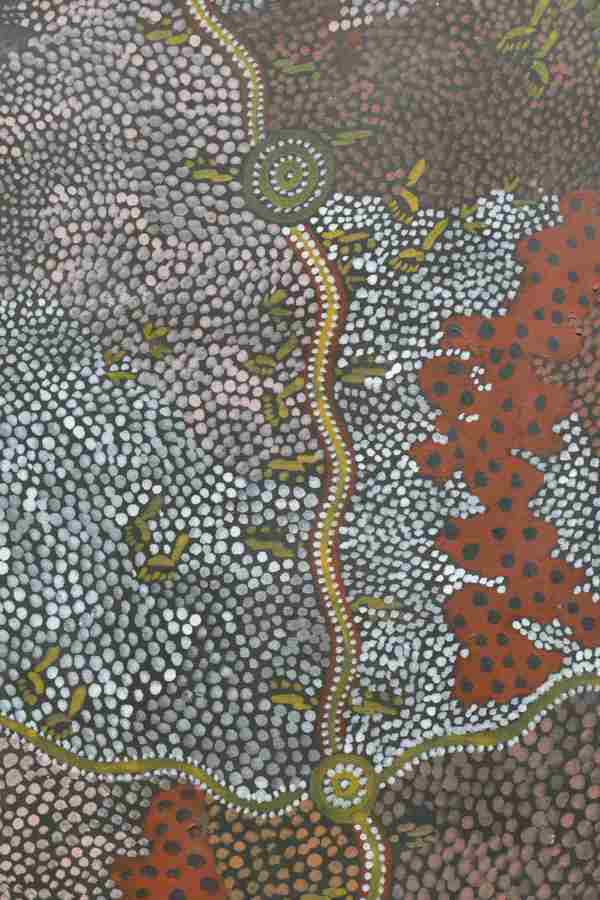 The line of sites on the right-hand side of the painting (unlike most, they are not depicted as linked) show the route of a terrified euro (hill-dwelling ‘cousin’ of the kangaroo) as he was chased by a wedge-tailed eagle. The euro, browsing on grass in the Aileron area, suddenly became aware of a great eagle. He fled from hill to hill, seeking sanctuary among the rocks, but the huge wedge-tailed bird was relentless in pursuit. Eventually, at Wakulpa – where a set of talons is depicted in the painting – the eagle swept down. His talons struck and the great beak tore, and the euro was killed. After he had fed, the eagle flew on to the west, forever ready to sweep down and to rend and tear.

Conversely, the long set of emy tracks indicates a friendlier relationship. Here is shown the travelling of an emu ancestor from Yaliyumu, a site in the heart of Anmatyerre country where soakage waters and food are readily available. He travelled west into Warlpiri tribal territory, there meeting a large group of other emus. These he invited and encouraged back to the Yaliyumu area, thus establishing the good emu country that exists to the present day.

Interestingly enough, this is the one element of the painting over which the two Tjapaltjarri artist brothers have no direct authority. However, perceiving a need for some further mythological element to give even greater balance to the canvas, they asked permission of two Tjampitjinpa subsection brothers to depict part of a mythological trail over which they had ownership rights. The Tjampitjinpa men agreed, and so a further travelling route was added. Finally, one has the mythological trails of the possum men – a large route somewhat like a U resting on its side – and the mala (hare-wallaby) men. The mala men came from far in the south, from sandy spinifex country. Travelling through Kambakapiti, a gap in a range some 200 kilometres north-west of Alice Springs, they came to Kutupa, a small black hill; here they drank at a large rockhole. 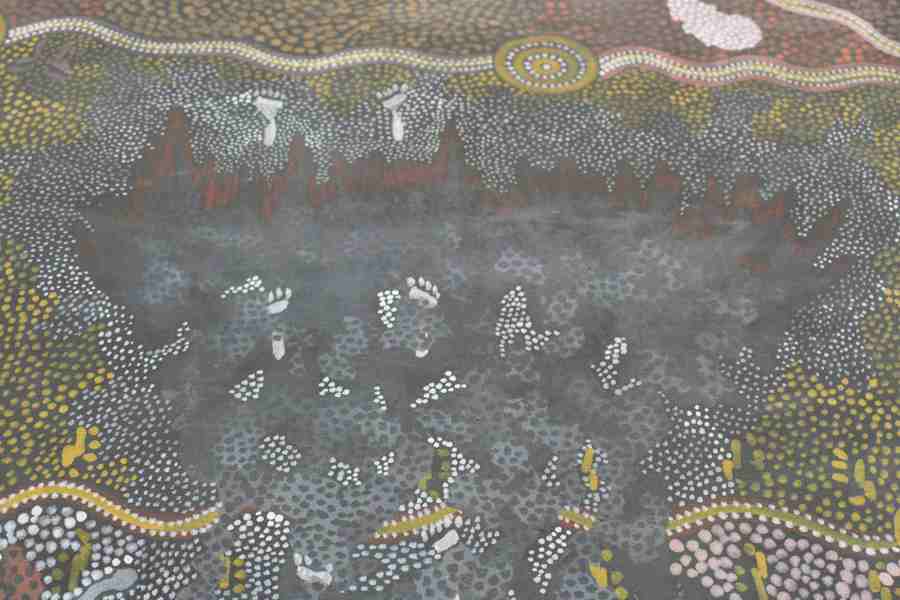 Passing on they came to Yalkuti, where they suddenly came face-to-face with the possum men. Here they had a big fight, the northern possum men using karli (boomerangs) to devastating effect, while the mala only had kulata (spears).

Such a fight may well reflect that a battle did take place in the area long, long ago. Certainly it is an interesting fact that the Pitjantjatjara people, far to the south in the vicinity of the South Australia – Northern Territory border, did not traditionally make boomerangs.

This is a brief summation of the basic mythological events depicted in this very complex painting. As can be seen, not only are natural features of the landscape explained, but the stories tell of natural phenomena such as storms and bushfires; may well have a moral base; and indicate social relationships, and so on. Furthermore, although derived from the men’s secret-scared religious world, the painting is an adaptation from this realm, deliberately manipulated to allow for general viewing while also keeping faith with tribal law.