Artist as hero and media star

1980, Shanghai – As one of the first backpackers in China, I had nowhere to sleep except the Seamen’s Mission (which served the best BBQ pork ribs I have ever tasted). The Bund was a mess of flats with washing billowing on the balconies; the museum had nothing in English and the noise of bicycle bells was deafening. There were no shops and no private businesses, except for a stall I noticed at the end of a quiet alleyway selling just one object – ceramic busts of Beethoven. That popular bust of Beethoven (still on sale) was made in 1812, when Beethoven was 42 and very much alive. 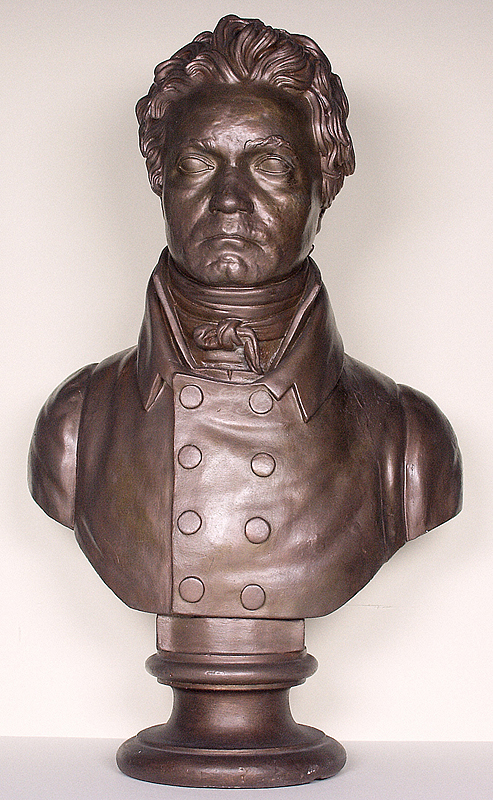 Franz Klein produced the bronze from a life mask (his face was lubricated with oil and plaster had to be spread over it, breathing was through two straws in his nostrils). The sculpture was ordered by Beethoven’s friend, Andreas Streicher, for display it in a hall of his piano factory. The space was used as a concert hall, so the public viewed the bust.

Now I am not sure how popular Beethoven was in China, I didn’t see anyone buy one, but the trains at the time (steam trains) carried two young girls dressed in white who were DJs. They played music and gave out information. And the only Western music they ever had was some Beethoven.

Mozart had died in Vienna December 1791 and was not buried in a pauper’s mass grave but the usual common grave. It was a quiet affair. His debts meant that a private funeral was not possible. Joseph Deine, who claimed to have been present, reported that just a few friends and three women (and not Constanza, Mozart’s wife) turned up.

Beethoven moved to Vienna the year after Mozart’s death and died there not that long afterwards (March 1827), yet the streets we lined with up to 30,000 people for the funeral procession. Theatres closed and famous artists participated as pallbearers or torch bearers, including Carl Czerny and Franz Schubert.

Why the difference? The question is why did Beethoven become a superstar. The magnificent Eroica symphony helped and the Romantic movement was in full sway with its emphasis on originality and genius. In all the arts, new forms, styles and languages were being pursued. Cultural life was dynamic and exciting. The industrial revolution was underway and a middle class was growing in importance.

Goethe had published ‘The Sorrows of Young Werther’ in 1774 influenced by Rousseau’s excitement about nature and Goethe’s own melancholia. Werther finds poetry is not enough to keep his ideals alive in the real world and shoots himself after he is rejected by the woman he loves. It became a text-book for the new romanticism. Readers dressed as Werther in yellow pants and blue jackets, visited his grave and killed themselves. Goethe travelled to Italy in a flush of naive Romanticism to find Rousseau’s natural man – ‘The idyllic dream of the first men living out of doors . . .’[i] On his return he took to botany, just as Rousseau had, and attacked the new Romantic visual art that first emerged in Germany, called Frühromantik (Early Romanticism, 1796–1806). He associated Romanticism with ignoring the natural world, looking backwards, emotional self-indulgence and excessive subjectivity, even madness. Rousseau had suggested that the arts were forms of emotional expression and his La Nouvelle Heloise and Confessions.

Beethoven was most probably bi-polar with episodes of depression and suicidal thought and episodes of manic elation. The sublime is present in his later works, the 9th symphony and his Piano Sonata in E Major, Op. 109 of 1820 which employs both E major (happy and radiant) and E minor (sad, melancholic).

In 1810, Friedrich submitted two paintings to the Prussian Royal Academy, ‘The Monk by the Sea’ and ‘Abbey in the Oak Wood’, they wowed the public. The images were sublime (melancholic) experiences, not pictorial narratives. Feeling was what counted, and would come to be categorised as Dionysian.

Apollonian and Dionysian are terms used by Nietzsche in The Birth of Tragedy (1872) to designate the two central principles in Greek culture. Apollo (Helios) the sun-god represents light, clarity, and form, is conservative, analytic, structured, uses form and rationality. Dionysus, as the wine-god is the opposite, letting go of body and mind, (which Nietzsche developed from Schopenhauer’s conception of Will ).[ii] The Dionysian favours drugs, dreams and ecstasy, sublime emotions, losing one’s ego, one’s identity.

The best known image of a Romantic poet is probably Byron in Albanian dress from 1813, fresh faced with lipstick lips, wrapped in a bright techni-coloured turban and thin wave of a moustache. Thomas Phillips was the painter, Byron the Napoleonic art director. Byron argued with his portrait painters wanting to look more Romantic. See my post self imaging poet

‘So long as the artist is inventing and is inspired, he finds himself at least for the purposes of communication in an illiberal state.’ Friedrich Schlegel, Kritische Fragmente (1797).

[ii] ‘Certainly it is hard to make sense of the concepts of the Apollonian and Dionysian, and many other insufficiently explained aspects of Nietzsche’s argument in that cryptic work, without relating them to Schopenhauer’s more explicit and extensive arguments.’ Martha Nussbaum, ‘Nietzsche, Schopenhauer, and Dionysus’, in The Cambridge Companion to Schopenhauer, Ed., Christopher Janaway, Cambridge University Press, 1999, p344-374.

The Lost Art Of Hitch-Hiking

The Great Wall - or lost Emperor