In this brutalist cistern, the art seems all sideways without explanation, the bamboo river fails to work with the concrete ceiling. And where would a work by Isaac Oliver or Abdus Samad Khan hang. Process shadows process, an intermittent field struggling to make art, to make sense, to make a career, to make a difference, to make love with the world.

Mike Parr’s Blind painting of a falling tree, 2022 is black paint that neither the child in the photograph or the author pay any attention to. I am tired, flew in this morning, nearly killed a beautifully strange bird in a ferocious storm, and been on the go since. I can’t give the art spotted around this vast space the attention, any artwork deserves. 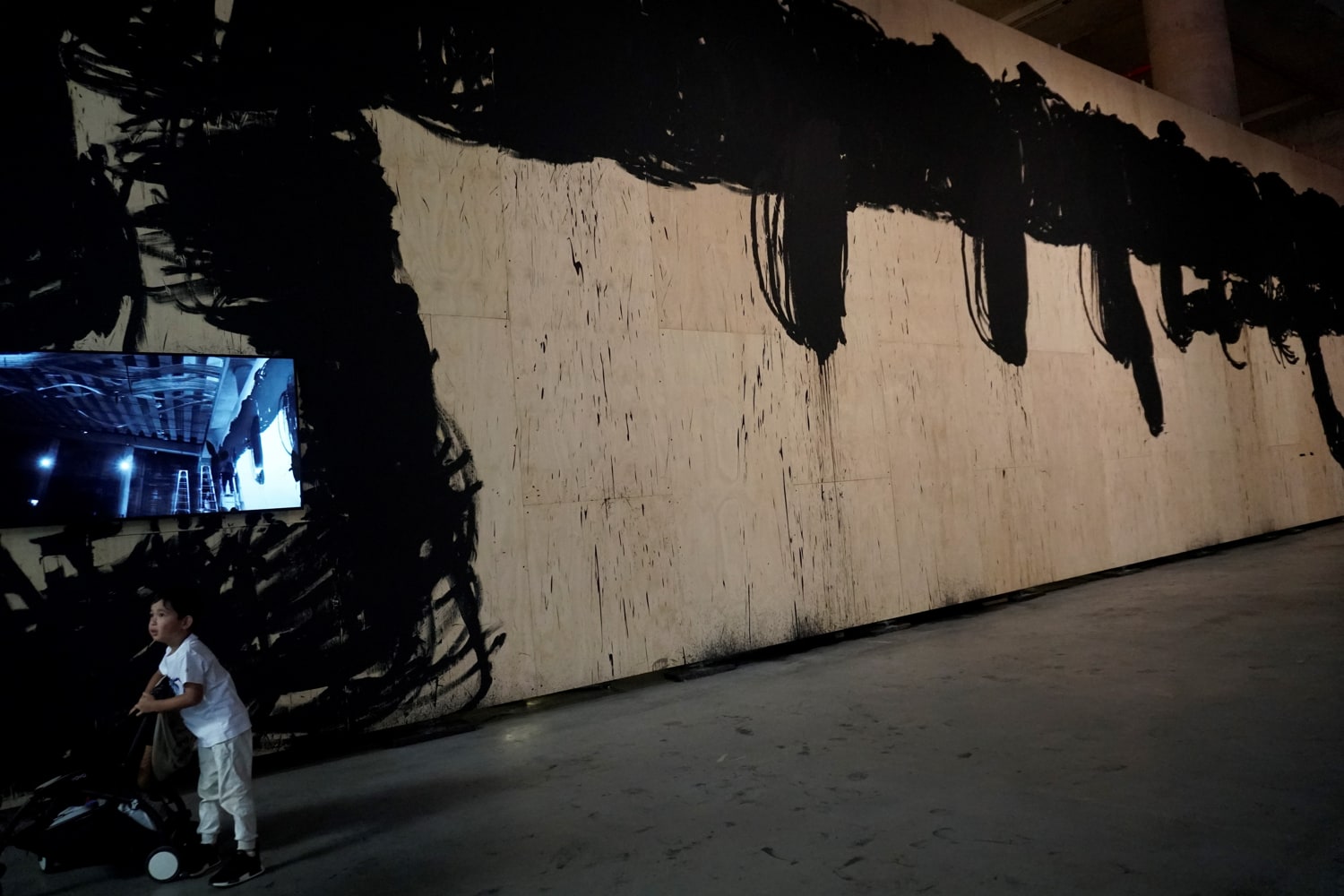 Jessie French creates a new generation of biodegradable plastic from algae. Her installation is a pan on a cooker bubbling away and three large jars in aqueous green. I asked, you can’t eat it. Then felt the finished product, tough, flexible, inedible, I would have loved it when I studied chemistry at school. 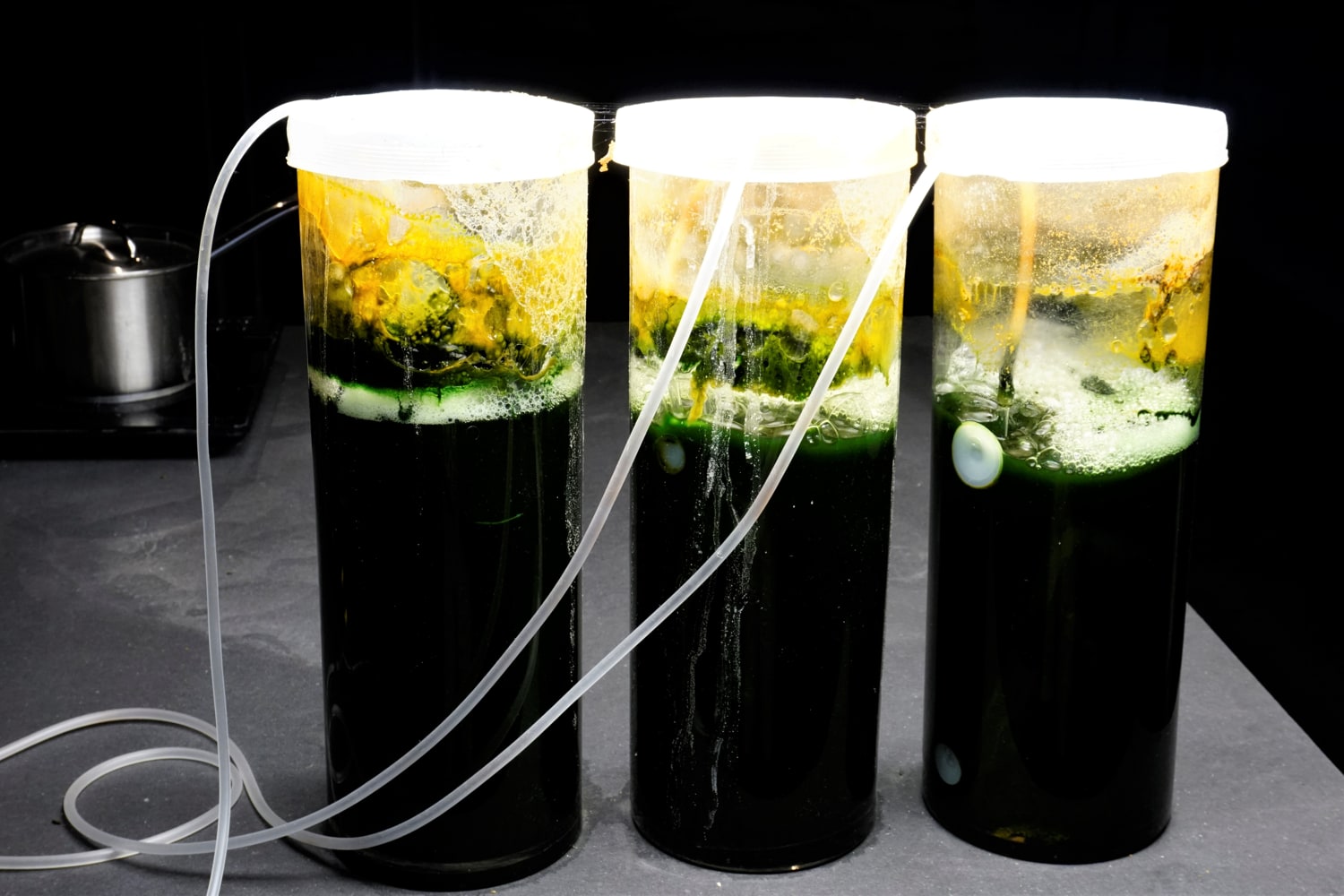 They can be melted back down to a liquid and reformed into a new solid, repeatedly. Using non-toxic pigments and polymers derived from red microalgae, French has large hanging sheets of semi-translucent plastic sheets (called leathers) in colours, but also fabricates useful objects like cups and plates.

On March 20, 2018, headlines announced the death of Sudan, the last male northern white rhinoceros (Ceratotherium simum cottoni). With only two females remaining, the subspecies is now classed as functionally extinct. Alexandra Daisy Ginsberg  in ‘The Substitute’ has digitally resurrected the beast. More science and art. The animal form and sound are heavily pixelated and distorted. Using data generated by cutting-edge AI (Google’s DeepMind), the rhino will begin to learn his way around the enclosed space, gaining intelligence. As he gains intelligence, his form and voice become clearer until ‘he is lifelike’.[i] Even if he is given his genome back, lifelike I don’t believe. 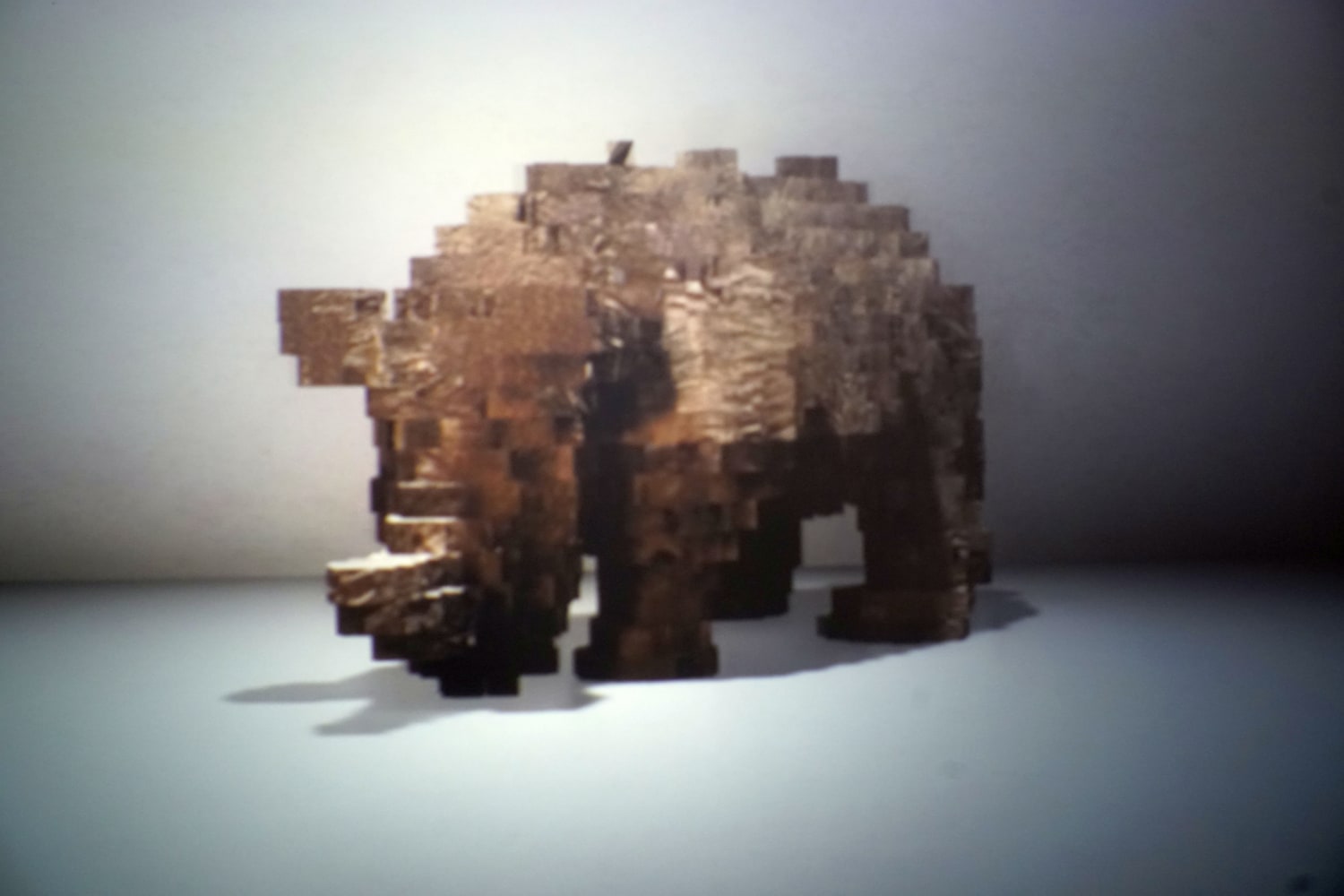 We should be frightened of AI which is happening without legislation, government oversight and permeating through our lives.

But before AI came machines, bureaucracies and then technologies. Without fire and tools like stone axes and language, Homo sapiens would not be Homo sapiens, but machines drain us of skills. The word machine derives from the Greek mékhané (skill, cunning invention) produced by métis (cunning intelligence).  Anthropologist Tim Ingold notes: ‘Machines take over from manipulation of tools, far from complimenting technique by providing a foundation in knowledge, technology forces a division between knowledge and practice, reducing the latter from creative doing to mere execution.’[ii] 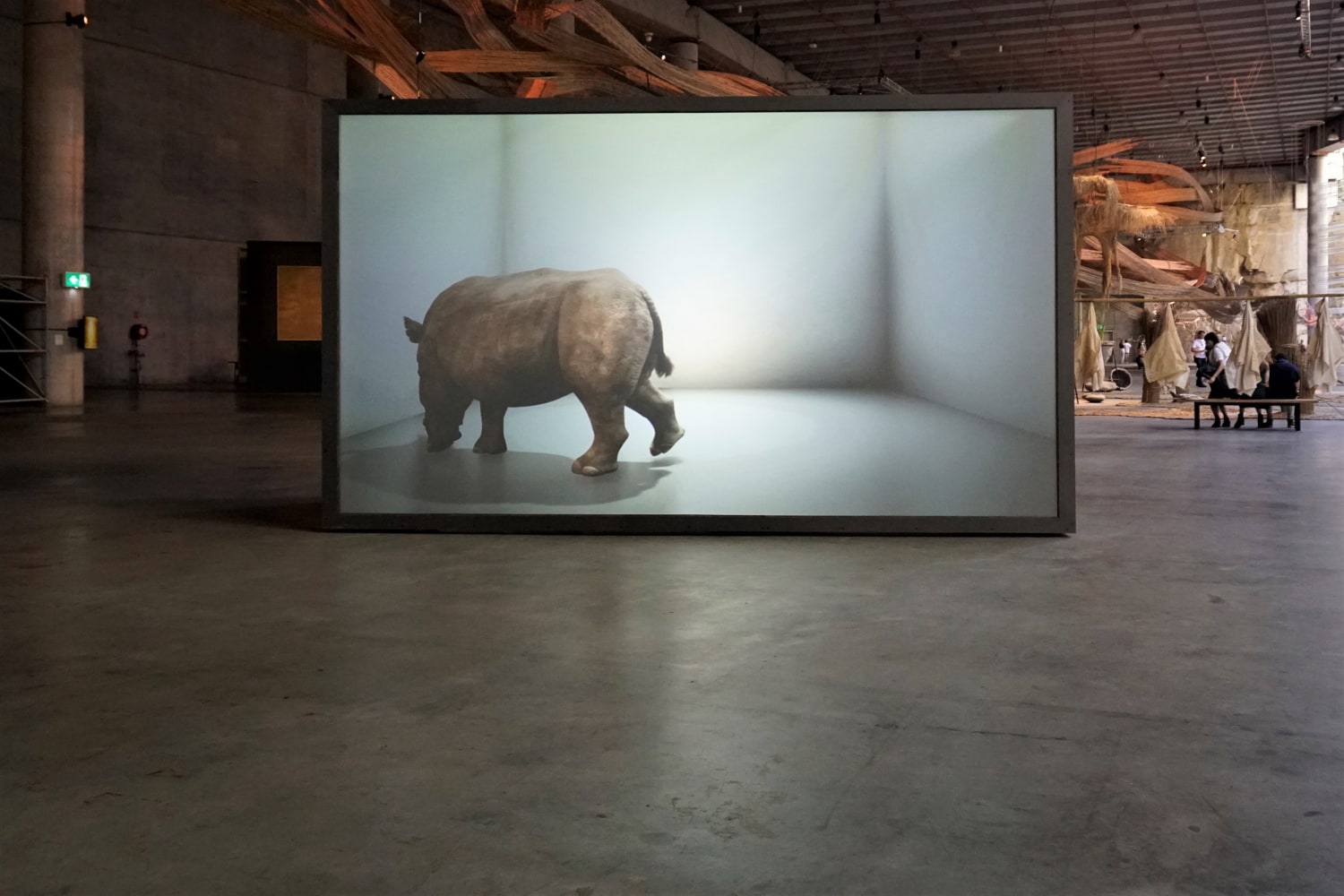 Kirkpatrick Sale warns of the invasive nature of industry and technology, ‘When U.S. industrialism turned to agriculture after World War II, for example, it went at it with all that it had just learned on the battlefield.’[iii] It’s not just the technology, but the associated bureaucracy and emphasis on rationality and efficiency. The late Val Plumwood blamed modernisation’s bureaucratisation and rationalisation for reinforcing existing Cartesian dichotomies: human / nature, reason/emotion. She wanted us to become ‘place sensitive’ – to resist rationalism through experiences and feelings, and realised, ‘The quest for a nature and place-sensitive society . . . challenges the existing order very deeply . . .’[iv]

But back to AI which so many put their faith into. AI visionaries see an unlimited future, even in art. The French collective Obvious programmed a computer to paint the Portrait of Edmond de Belamy, which sold at Christie’s in New York in 2018 for well over half a million A$.

Kate Crawford declares, ‘AI is neither artificial nor intelligent. Rather, artificial intelligence is both embodied and material, made from natural resources, fuel, human labor, infrastructures, logistics, histories, and classifications. AI systems are not autonomous, rational, or able to discern anything without extensive, computationally intensive training with large datasets or predefined rules and rewards. In fact, artificial intelligence as we know it depends entirely on a much wider set of political and social structures. And due to the capital required to build AI at scale and the ways of seeing that it optimizes AI systems are ultimately designed to serve existing dominant interests. In this sense, artificial intelligence is a registry of power. 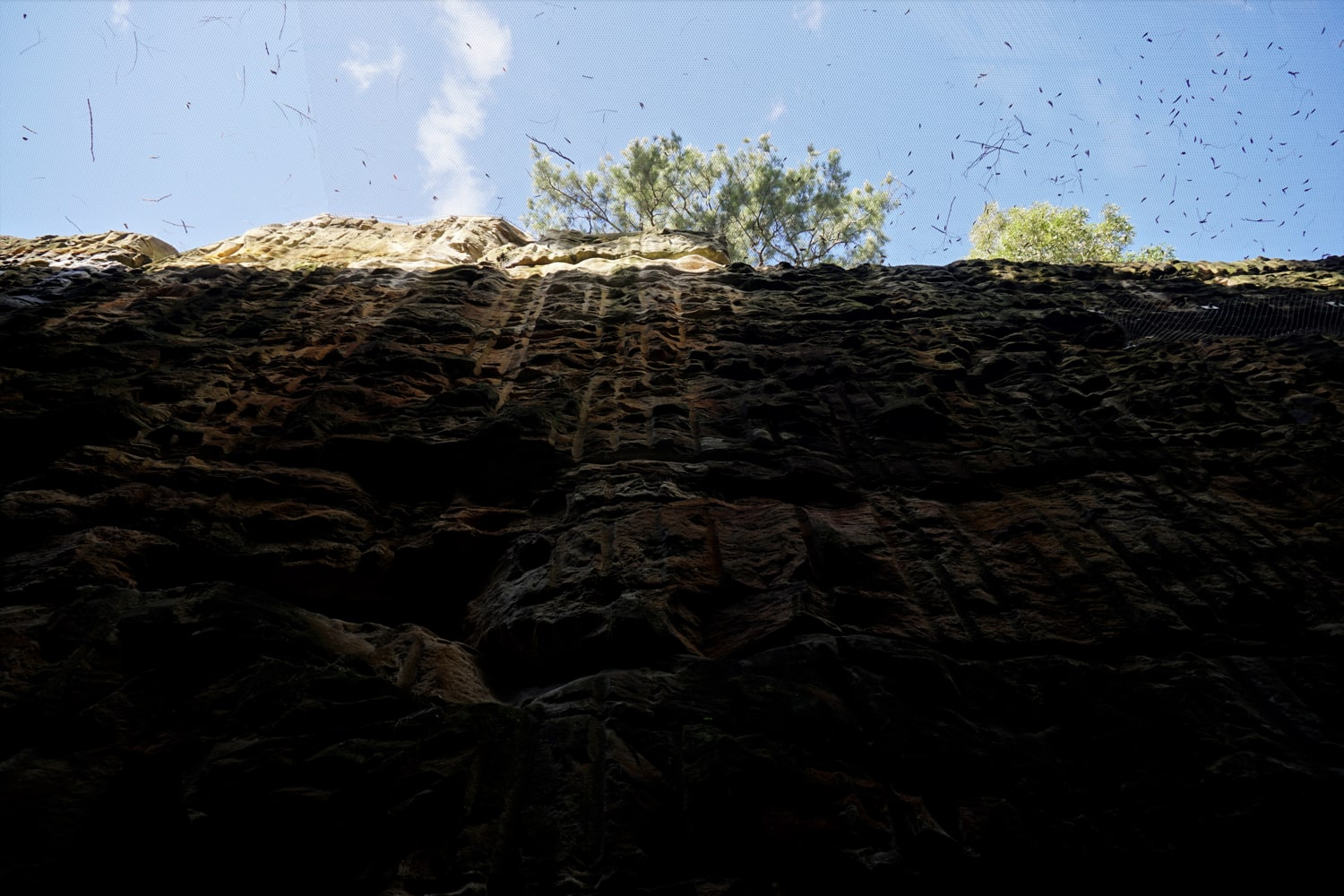 Simply put, artificial intelligence is now a player in the shaping of knowledge, communication, and power. These reconfigurations are occurring at the level of epistemology, principles of justice, social organization, political expression, culture, understandings of human bodies, subjectivities, and identities: what we are and what we can be. But we can go further. Artificial intelligence, in the process of remapping and intervening in the world, is politics by other means—although rarely acknowledged as such. These politics are driven by the Great Houses of AI, which consist of the half-dozen or so companies that dominate large-scale planetary computation.’ [v]

And in an interview, she reiterates, ‘When you start looking at AI systems on that bigger scale, and on that longer time horizon, you shift away from these very narrow accounts of “AI fairness” and “ethics” to saying: these are systems that produce profound and lasting geomorphic changes to our planet, as well as increase the forms of labor inequality that we already have in the world.’[vi] She quotes Astra Taylor’s comment that, ‘the kind of efficiency to which techno-evangelists aspire emphasizes standardization, simplification, and speed, not diversity, complexity, and interdependence.’ [vii]

Brian Cantwell Smith warns that, AI systems ‘will increasingly dominate the substrate and infrastructure of life on the planet.’[viii] I distrust AI and distrust art that fakes nature in any way. Give me Durer’s ink drawing or woodcut: ‘When Durer published his famous woodcut [1515] of a rhinoceros he had to rely on second-hand evidence which he filled in from his own imagination, coloured, no doubt, by what he had learned of the most famous of exotic beasts, the dragon with its armoured body.’ [ix]

David Zeitlyn notes the power of art, ‘If we then look at the first drawing [1787] of a rhino made from a live model we see more the influence of Durer’s woodcut than representation of the shape of rhino’s bodies. A cultural representation acts as a sort of template, a way of seeing the world. Confrontation with a real live rhino was not as powerful as the paradigm engraving by Durer.’ [x] 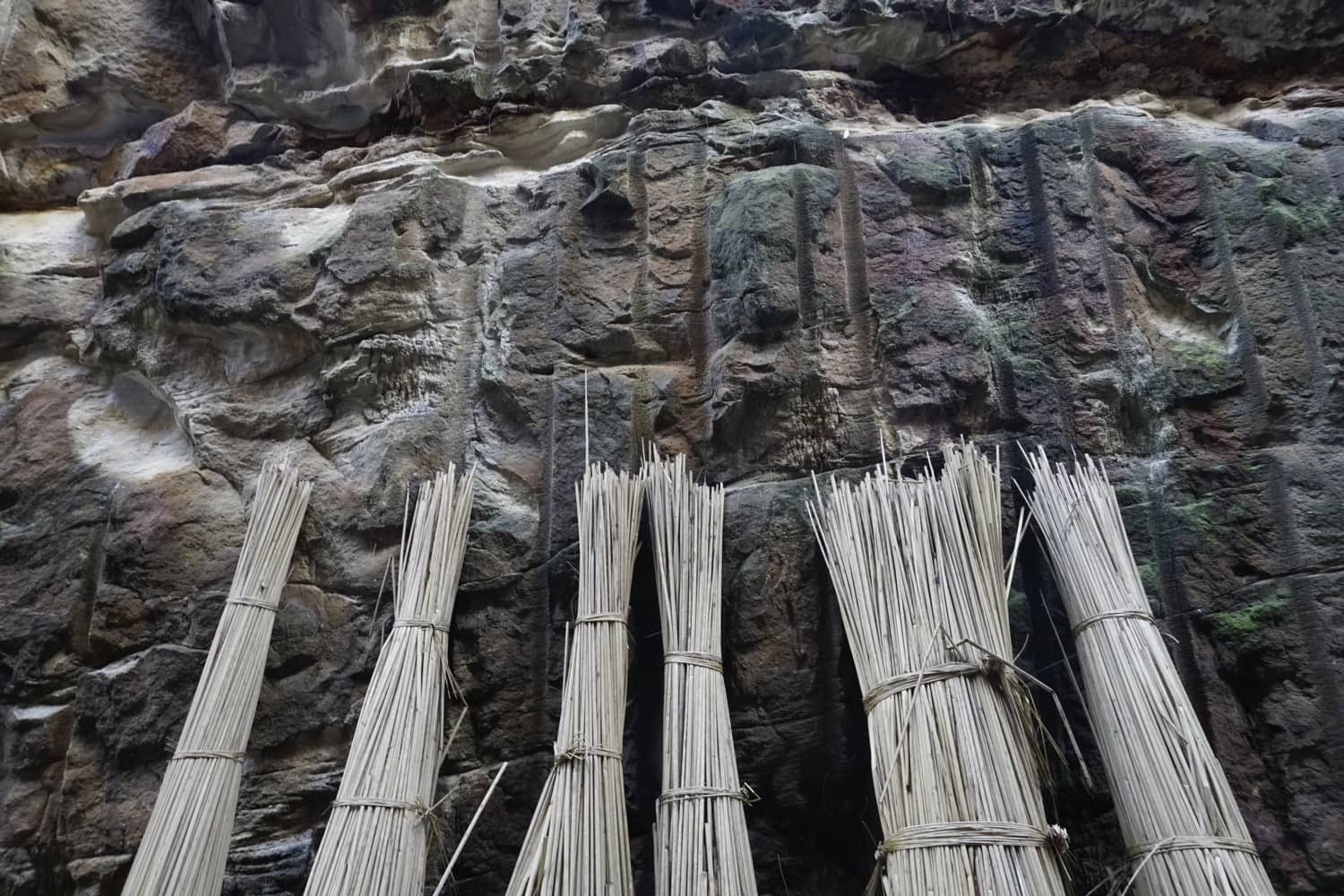 Peruvian artists Ana Barboza and Rafael Freyre work with ancient technologies to purify water, The ancient Andean wachaque canal system was used in the desert to grow totora and reeds that grow in coastal wetlands. Their fibres are used to make utensils, furniture and architectural elements such as shicras.[xi] They also have been used useful to purify water. Totora and reed are ‘phytodepuration’ plants that contain rhizomes that absorb organic matter from water. [xii]

The reeds in bundles, on the floor or resting against the vast walls are lost, and have to contend with a giant blundering rhinoceros.

[ii] Tim Ingold, ‘Tools, sociality and intelligence’ in Tim Ingold & Kathleen Gibson, Tools, Language and Cognition in Human Evolution, Cambridge UP, 1993, p435. A ‘machine is often distinguished from tool in gaining power from outside the body and not being manually operated.’ p435

[iii] ‘It was a war on the land, sweeping and sophisticated as modern mechanization can be, capable of depleting topsoil at the rate of three billion tons a year and water at the rate of 10 billion gallons a year.’ Kirkpatrick Sale  ‘Lessons from the Luddites’, final chapter of Rebels Against The Future: The Luddites And Their War On The Industrial Revolution: Lessons For The Computer Age, Addison Wesley, 1995

[vii] Kate Crawford, 2021, p71. ‘We have to recognize both the dangers and possibilities associated with automation while relentlessly poking holes in rhetoric that seeks to conflate technology’s present and potential capacities with an inescapable, and deeply exploitative, way of organizing labor and compensation.’ Astra Taylor, ‘The Automation Charade’, Logic Issue 5, Failure, August 1, 2018.

[ix] E H Gombrich, Art and Illusion: A study in the psychology of pictorial representation, Phaidon, 1960. The image is based on a written description and brief sketch by an unknown artist of an Indian rhinoceros that was shipped to Lisbon in 1515.

[x] David Zeitlyn, ‘Regarding machines for the suppression of time’, http://www.mambila.info/it-va/it_2.html, November 8, 1996.

[xi] Shicra may be the oldest textile technique in the Andean world. It consists of fabrics of vegetal fibres used to construct walls in the old temples and ceremonial pyramids in Peru.

[xii] ‘Their projects start from the observation of non-human territory in constant transformation through water, mineral, vegetal and animal forces. Their research process is focused on recognising the uniqueness of materials, organisms, ecosystems and history and searching for collaborations with local artists as well as exploring traditional techniques.’ www.biennaleofsydney.art