Alfriston, population under 1,000, did it vote Brexit?

In 1931 the poet and children’s author Eleanor Farjeon wrote the popular hymn Morning Has Broken in Alfriston using an old Gaelic tune. The song was later recorded by Cat Stevens’s in the 1970s and was a hit. She was inspired by the beauty of this village in the weald of Sussex. The South Downs Way crosses the river Cuckmere here. As a young boy I loved the Sussex downs climbing the old hill forts of Cissbury or Chanctonbury Rings, picking blackberries, hardly anyone about. The shepherds had gone The former was once an important and busy place being the largest flint mine in Northern Europe.

I know Eleanor Farjeon from her biography of Edward Thomas, a writer and later a poet who loved what England was. He loved the part of Hampshire near Petersfield where my Prep School was located on the Western end of the Southdowns. His poem Adelstrop written after his steam train made an unscheduled stop at this tiny village in the Cotswolds is his best known. ‘All the birds Of Oxfordshire and Gloucestershire’ which end the poem will be greatly diminished now.

Thomas died in the First World War and things were already changing. A few years later someone wrote: ‘Stephen Blackmore is dead, and with him has passed away the last of the old race of Southdown shepherds. This is a matter that will be greatly regretted by all who are intimate with pastoral Sussex, for the Southdown shepherd was a man apart from his fellows ; one who had his own customs. followed traditions, and was full of wise saws and a homely wisdom that came largely of a life of contemplation among his lonely hills.’i 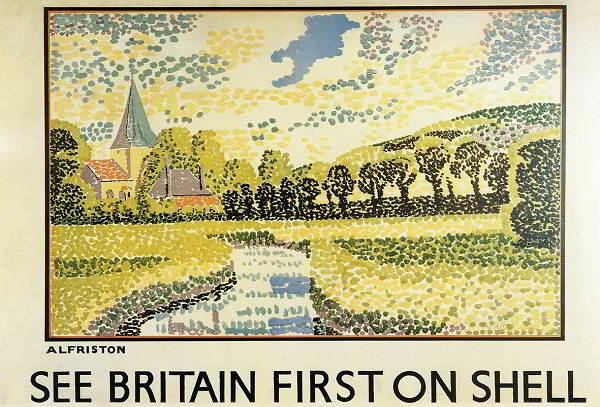 England has changed. When I was a child the population of the UK was under 40 million, The Guardian reports that ‘the number of people living in Britain is projected to rise from 64.6 million in mid-2014 to 74.3 million in 2039.’ii Since I lived there the skylark population has declined by about 70%, the pressures on the south of England where I grew up in at a boy (born 1955) are immense.

The big divide in the referendum was between the young who wanted to remain and the old who I think voted for nostalgia, for an England that can never be retrieved. According to YouGov polling data, 75 per cent of 18- to 24-year olds voted to remain in the EU — compared to the 52 per cent of all Britons who voted to leave in the referendum. In fact there is a case that environmental protection, so desperately needed, is stronger under EU regulations.

I am writing this on a cold wet winter’s morning in Montevideo. I feel as close and as distant from my English boyhood as I would anywhere.

I recall visiting Alfriston Clergy House, a beautiful thatched medieval hall and the gardener asking why I was photographing his trowels on a loamy bed and not the flushed Judas tree.

i‘The Last of the Southdown Shepherds’, the Spectator, 23 April 1920