Jan van Eyck was an original Flemish master of the painter’s craft. His realist use of oil paint in cumulative layers of transparent coloured glazes to render minute details of textures, refractions and reflections in glass and metal, human skin clothes and flowers, and dazzling glowing jewels was original.

I start with him because these techniques led to what we think of as the still life genre through Dutch art, though Pompeii has good examples, and 2,000 years ago Pliny complained about the popularity of common ‘genre paintings’ including still life.

This poem describes a van Eyck in the Louvre, paid for by a man famous for being mean and corrupt. The quality is immediately present through both perceptual and emotional response. Add to that the painting’s ability to entice and further reflection on what’s going on, both in the narrative, and the surface with that amazing technique, and you have a masterpiece.

extract from   The Madonna with Chancellor Rolin c1435

One row of tiles leads an excited eye to the Virgin
resplendent in red. Jesus, on her demure lap
blesses the donor with one hand, the other
holds a jewelled orb, he is saviour of the world;
an angel hovers on real wings, it’s a new language
that crowns Mary with a filigree of precious light.

Rolin kneels in a cloth-of-gold brocade jacket (paint
not shell gold) with mink trim, his hands pretend to pray
beside a Bible, but his faith is in power. The hard man,
for forty years the force behind the king, has a grim
expression of feudal cunning, as if calculating
the baby’s future earnings, or the cost of nails.

Earth glimpses heaven suffused with somnolent blush,
is it morning or prodigal evening? Everything exists on song,
oil and pollen, feathers, petals and gold, intricate tilework, scales
of a butterfly wing, snow tracing a mountain epic beneath blue sky.
Rolin does not look at the view or the mother of God, or Jesus
and they do not look at him. My animated attention looks at them all.

Are all arts one, as Horace proposed (Ut pictura poesis = as painting so as poetry)? The concept that poetry and painting are similar goes back to Plutarch, but Gotthold Lessing in 1766 attacked this idea arguing that poetry is the art of time and painting the art of space; poetry plays the ear over time time while painting offers the eye an image laid out in one space. I’d argue that any painting, even a Rothko or a still life engages the viewer with a succession of moments.

A. S. Byatt asks, “Why did Dutch painters, in a country at war with Spain, not paint violence, but calm interiors, portraits and landscapes?”[i]  She could have added still life that began in the early 1600s Briefly it was Protestantism, urbanisation, a new middle class with money, new curiosity about the world that brought it riches and a new way of living – the domestic home, which house owners wanted to decorate.  Art markets emerged in Italy, Holland and Britain, and auctions began in the 1660s in restoration England. Art became valued for its intrinsic quality not because if its theme or accuracy to the world. As art became cultural and social and economic capital (Pierre Bourdieu[ii]). The glossy still life genre of later Dutch masters was Philip Tabor writes, ‘indeed literally tele-vision in that it depicted not home products but porcelain, glassware, fabrics and exotic botanical species newly imported from afar — from the Levant, say, the East Indies or China. Such still lives were also a sort of shopping channel, in that the cost of the things depicted, their exchange value, was an important part of the picture’s message: the painting transformed objects into commodities.’[iii]

I jump ahead to start with a favourite still-life of mine, by Cezanne, Pot of Primroses and Fruit, c1890, Courtauld

It is a favourite I get to see every other year, but I have no idea why. The strange framing and most of the painting I rarely attend to. I gaze at the surface of the pear and apple. 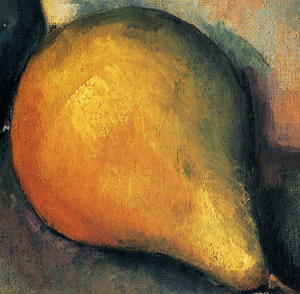 Cezanne because he felt his way through a work, and his still lifes seemingly casual were carefully worked, placing centimes under the fruit for example. Cezanne could be working on a still life long after the fruit had rotted in the bowl. That reminds me that Cezanne painted his art dealer Vollard, but never completed the work, despite over 140 sittings. He just said that parts of the waistcoat were not bad. As Merleau-Ponty observed, “painters the world will always be yet to be painted, even if it lasts millions of years . . . it will end without having been conquered in painting.” (The Primacy of Perception, 1964).

Émile Bernard that Cézanne spent a whole month in Aix 1904 working on a single still life: “The colours and shapes in this painting changed almost every day, and each day when I arrived at his studio, it could have been taken from the easel and considered a finished work of art.”

I haven’t tracked this work down, only watercolours from that year, but the New York Herald, Paris edition Oct 14, from that year reported: ‘Cezanne has concocted a still life; varnished apples in unbalanced bowls. They say that he is another Chardin.’

Chardin was French painter 150 years earlier who revealed his secret to Diderot. He used touch not his eyes. He said it was by touch and not by sight that he judged, say, the roundness of pine kernels (or here, of plums), rolling them gently between his thumb and forefinger.

Jed Perl writes of this work: It is a very small painting–just over a foot and a half high and just under two feet wide-and so you might expect to be able to take it in all at once. But when I first look at The Brioche, it is Chardin’s way of differentiating one substance from another that holds me; and so I linger over his distinctions.

Chardin gives us the exact character of cherries and peaches, of biscuits and a crusty brioche, of porcelain and glass. And even as this naturalistic virtuosity is astonishing me  . . . The still life is becoming landscape-like. I can think of the brioche as a sort of Mont Sainte-Victoire–surmounted by a flower-tree, that is, the orange blossoms–which I move away from and return to by several different paths. . . A picture by Chardin is a dream of unity that we glimpse.     [iv]

Meticulous, detailed painting was practiced by both botanical and still life painters. Here is opulence but with a restrained tonal range, and yet playful – energy coming from the plates balancing on the edge. He lived in Haarlem all his life and not much else is known.

Coorte was not well known at the time and we know little of his life. He was a very individual artist, a minimalist. Most Dutch still life painters went for showy opulence, here Coorte offers a simple image. I have chosen these last two images as I saw them in the flesh earlier this year and both have stayed with me.

As impressionism stirred, the tradition of the still life was resurrected. Manet’s free brush strokes bring the vegetables to life.

The almost abstract mob of fish heaped onto the beach
cast a wild naïve beauty from the sea of plenty.
Upside down, a snapper stares from the jumbled centre
reflecting silver scales with red fin trim, a mean perch
with raised fins and sharp teeth
lies across the picture like a fierce Manet nude.

A gaping crimson squirrelfish is looking at you,
they all are, even the hammerhead shark squashed
beneath them. In the foreground a pair of rainbow wrasse
pose on the sand, scaling coloured glazes of credible detail.
The catch is exhibition, field guide to form,
the depths are feeding new livings.

The background is painted dead and alive:
the wicker basket as an emptied mausoleum beneath
a sandstone overhang, picturesque bedrock, hazed
guardhouse and flagpole of Dawes Point Battery
now buried beneath the coat-hanger, (the importance
of size in a painting of exquisite flatness).

I wrote this poem immediately after seeing a piece of bricolage, found objects pieced together by Peter Cole, a painter I had not heard of, at The Ray Hughes Gallery

What is looking at me? The most recent invader following
flightpaths of the ibis from the west and fig birds from the north?
A toucan, lipstick red? The exotica of cannibalism and bricolage
of collecting excess of grain and taxes, balancing work with the language
of hope, of finders keepers, of once upon a time en plein air.

The eyes could be camouflage, but the blades were used
to cut vines and pandanus, a neglected technology, knots perish
from the archaeological record. The vessel floats in balance,
water held down against the molten iron core, the burnt
black panel testudo  held up against the wall, at attention
for the populace, currently four million, four hundred
and forty thousand and a few, tying the bits together.

That’s how we all got here, the cantilever of tales and traditions
natural processes to collect roots and fruits, old knives
floating junk, rarrk patterns on the harbour, canoes
cut from the stringybark carrying fire to cook fresh crab,
mussels, whelks and pippies, while men speared the shoreline.

An impromptu census of the harbour, August 1788, tallied:
67 canoes with 94 men, 34 women and nine children.
There are two left in this universe and the artist.

A thread tied to a mast and diagonally down to a nail,
hammered outside the action of the piece, hangs by a thread.
The temptation is to pull at entropy, a chain reaction,
bird taking flight, conjuring some catastrophic kinetic art. . . .

I sent the poem to Peter C/O the gallery.

It shows a great insight into my work and I’m honoured that you were moved by the piece
and took the time to write so beautifully about it.
It’s certainly a first for me. Thanks again and all the best.
Cheers, Peter

The arts should interplay!