Trying to sort through my mess of papers, I found an old telegram I sent from Peshawar in 79, probably the only one I ever sent. I thought of my travelling days when you didn’t have a mobile phone, a guide book , or much money, let alone a credit card. There was no social media, you travelled among the people and everyday was an adventure. 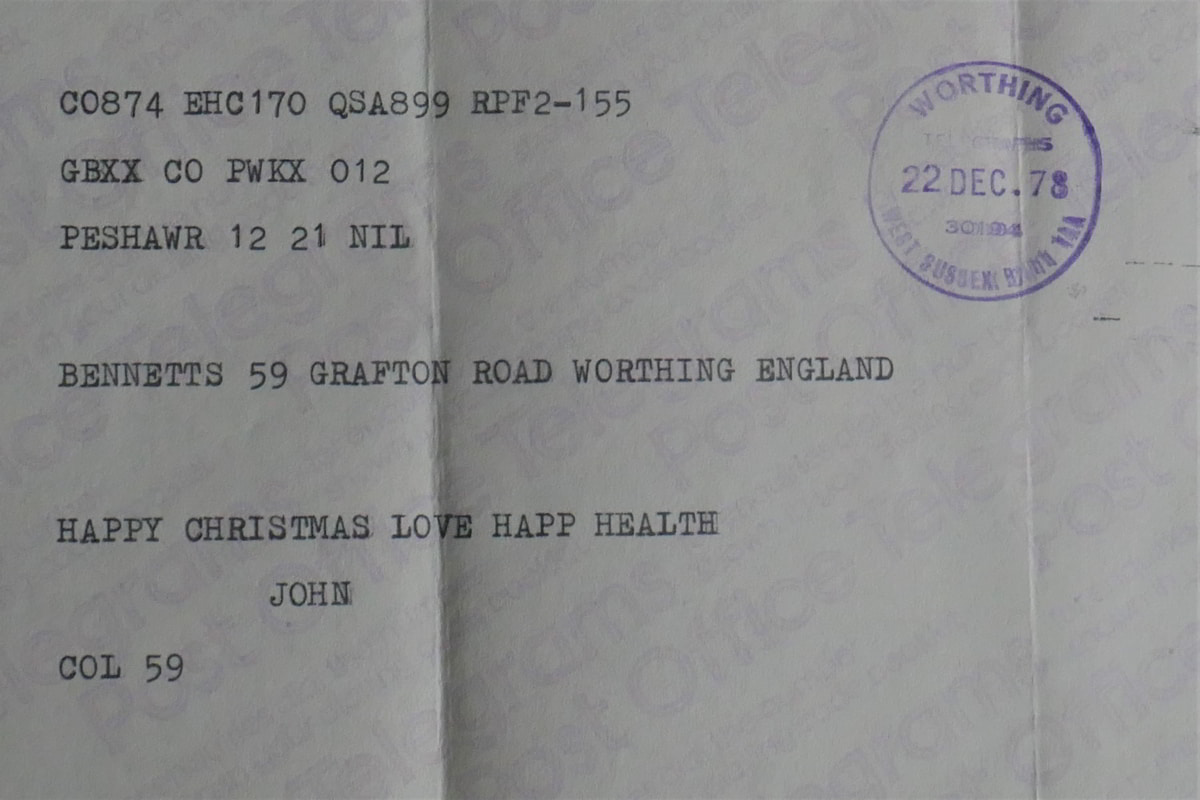 and found that an old friend, Ray Meyer, who died a couple of months ago, had posted a comment: ‘Arnold van Gennep’s cross-cultural research (The Rites of Passage, 1909) uncovered three phases of boys becoming men: separation, transition (liminal) and incorporation. The decade of my main hitchhiking activity could be seen as the liminal period -‘removal of previously taken-for-granted forms and limits.’ Or I could just quote Pico Iyer, ‘We travel, initially, to lose ourselves; and we travel, next, to find ourselves.’ Unlike traditional rites of liminality, road trips never follow ‘a strictly prescribed sequence, where everybody knows what to do and how’ nor bow ‘under the authority of a master of ceremonies.’ We were on our own. The social nature of community, solidarity and maturation had changed. I find a serene peace on the road, a freedom without responsibility, an unknown destination, followed by the pleasure of the return to my loved ones.’ RIP Ray with peace and freedom.

‘Hitchhikers once queued up along Australian roadsides; now they are rarely seen. Increasing car ownership, cheap air travel, and a growing ‘culture of fear’, reinforced by widely publicised rape and murder cases, have all played their part in this decline. The figure of the hitchhiker continues to have strong cultural resonance nevertheless, and the practice may yet see a resurgence.’[i] Alice Garner wrote this fourteen years ago. I can’t see a resurgence happening. The world has changed.

In 1980, I was visiting Australia, and with friends and a New Zealand girlfriend, touring in a beaten old Holden Belmont station wagon. At the same time, Alice Garner was hitchhiking around Australia as a ten-year-old with an adult, Anne Péchou (relationship unclear). They were ‘eternal optimists, we travelled without sleeping bag or tent.’ As a man, I would have spent mostly sleepless nights, I loved the self reliance of a tent and sleeping bag when I was hitchhiking.

[i] Alice Garner, ‘Risk and reward: the (lost?) art of hitchhiking’, A 2008, 2nd International Colloquium on Tourism & Leisure, https://www.academia.edu/40823518/Risk_and_reward_the_lost_art_of_hitch_hiking