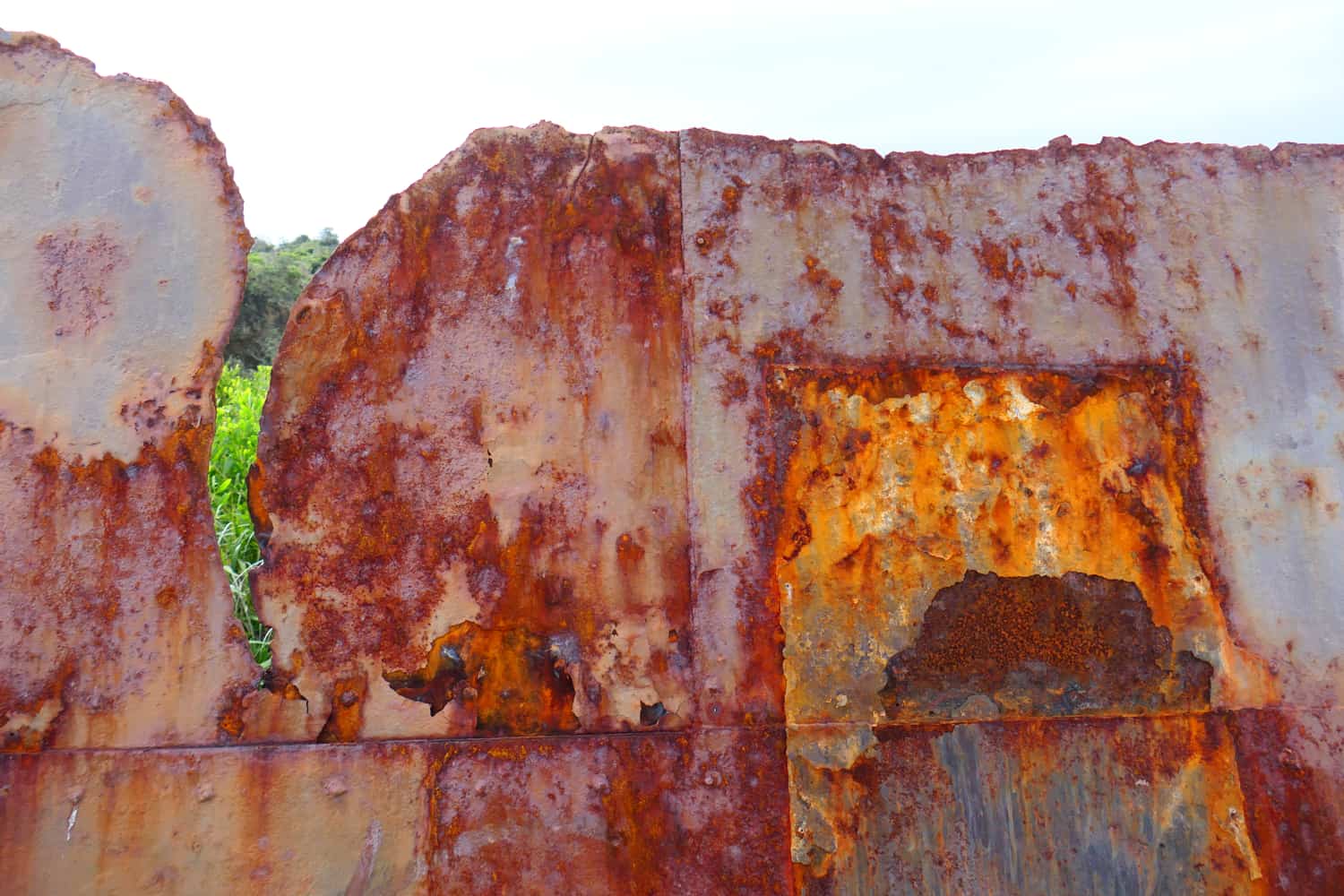 The ghosts of the shipwrecks reign in rust,
their images and stories have lost their grip,

disintegration was faster than anticipated,
the wall nets spindrift, renewed every day. 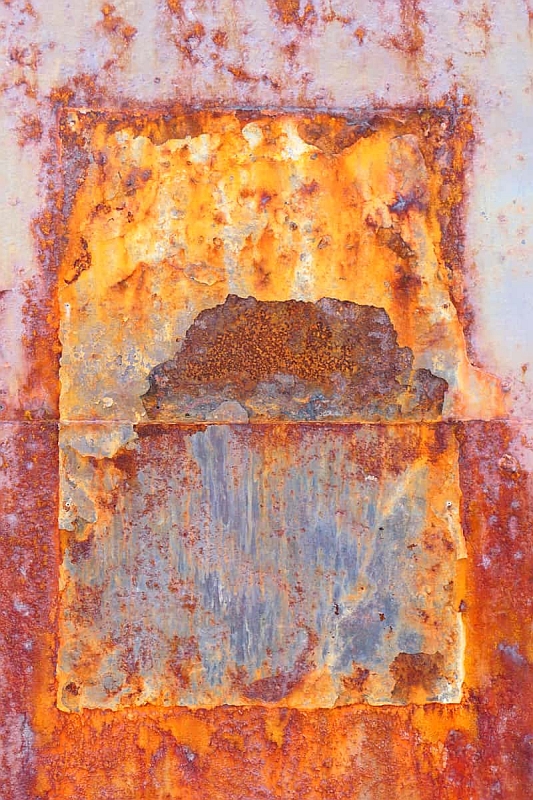 The photograph sometimes reveals the invisible
or more likely, what was never noticed. 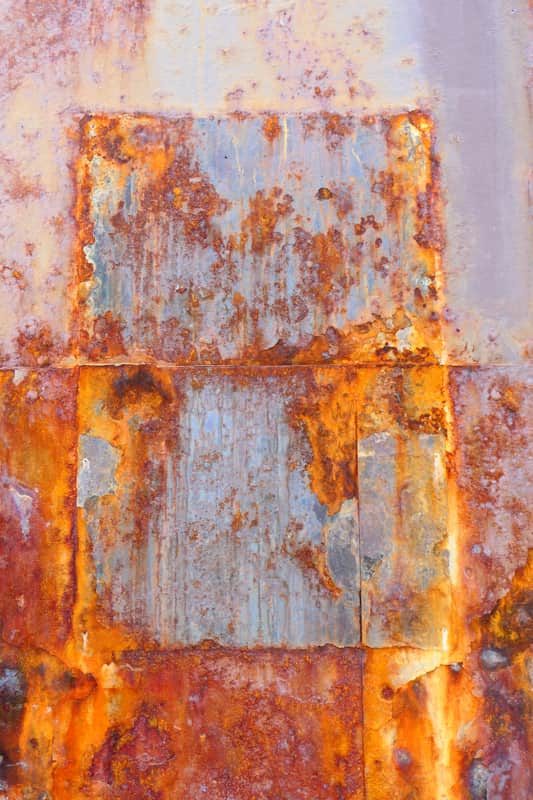 The art is improvised by weather,
fossil in ochre, a rich red duck curry. 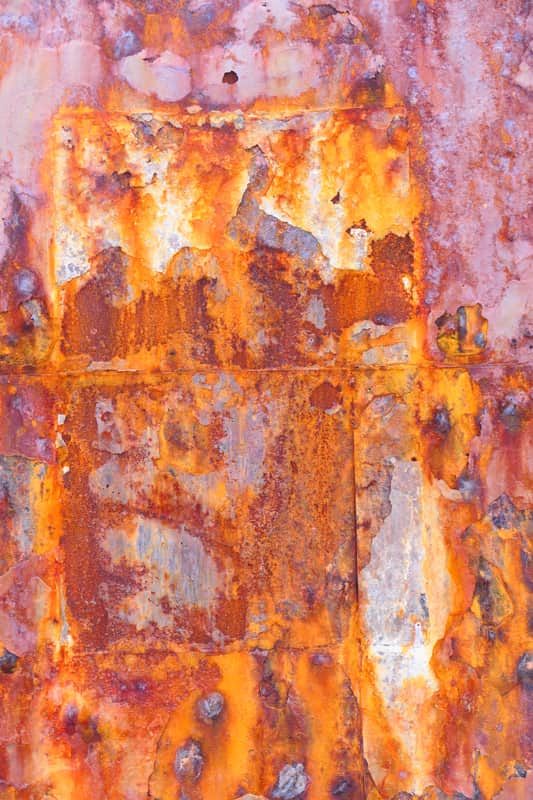 We are going back to the old media, rust or ochre,
cochineal, kermes and lac, before the van Eycks. 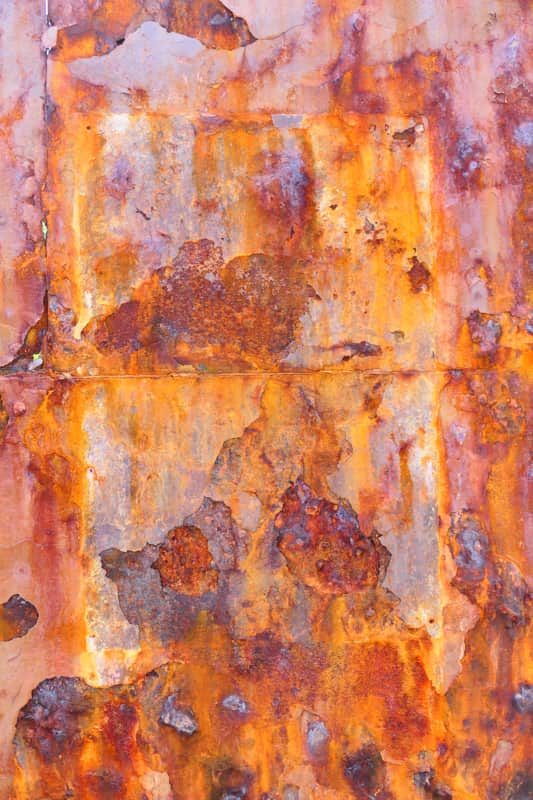 Someone hammered this wall a century ago,
their muscles put to use, cogs in the chain 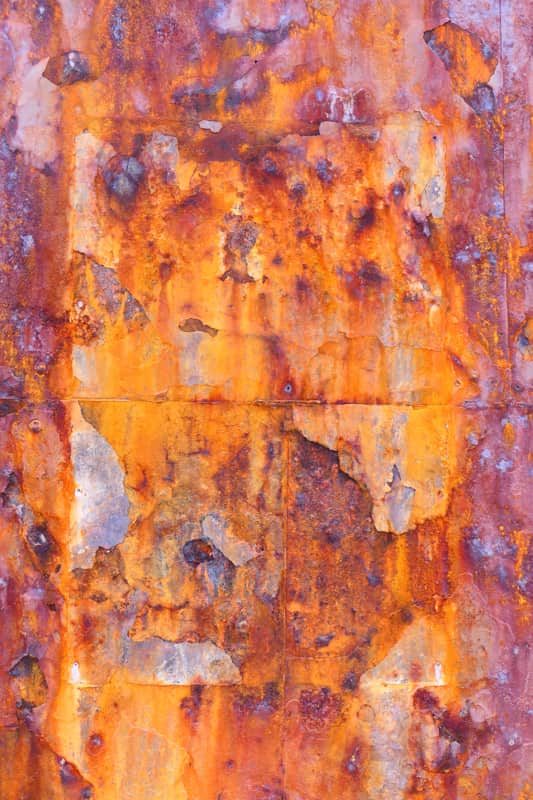 logging the surrounding Country.
Their sweat has evaporated, their wages spent. 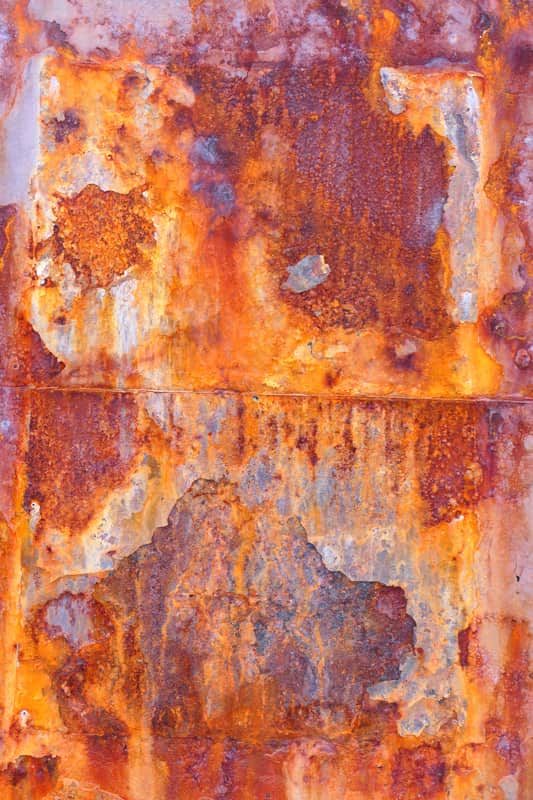 The dead have been filled in, drowned at sea,
age, disease or accident, the ‘who’ filed away.

We love to make things, we love our hands.
On the beach below a new construction begins. 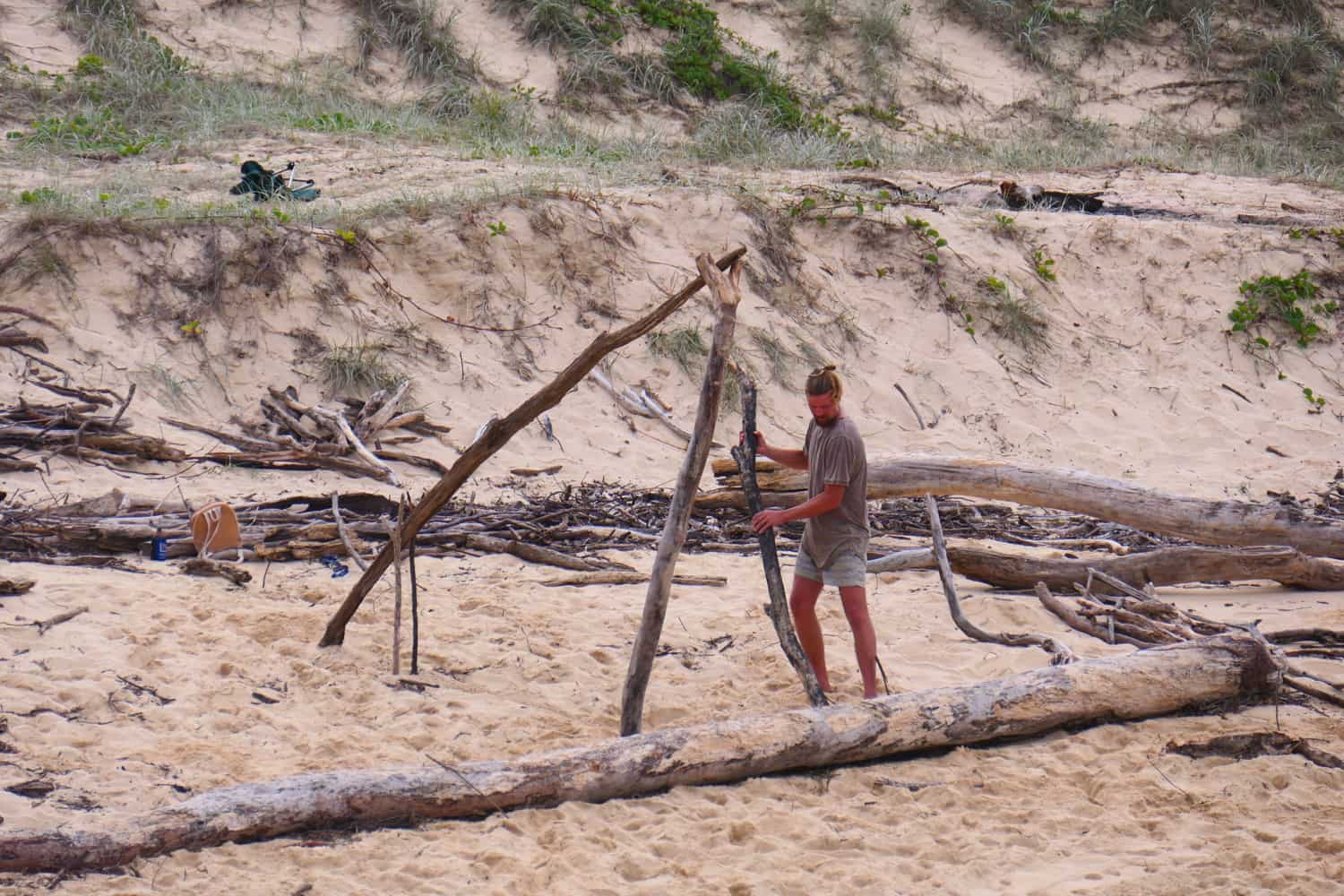 Our legacy leans against this ceremonial wall,
its founding history leaving out originals.

It is the curse of being Indigenous;
to be unseen in our own land.   Stan Grant [1] 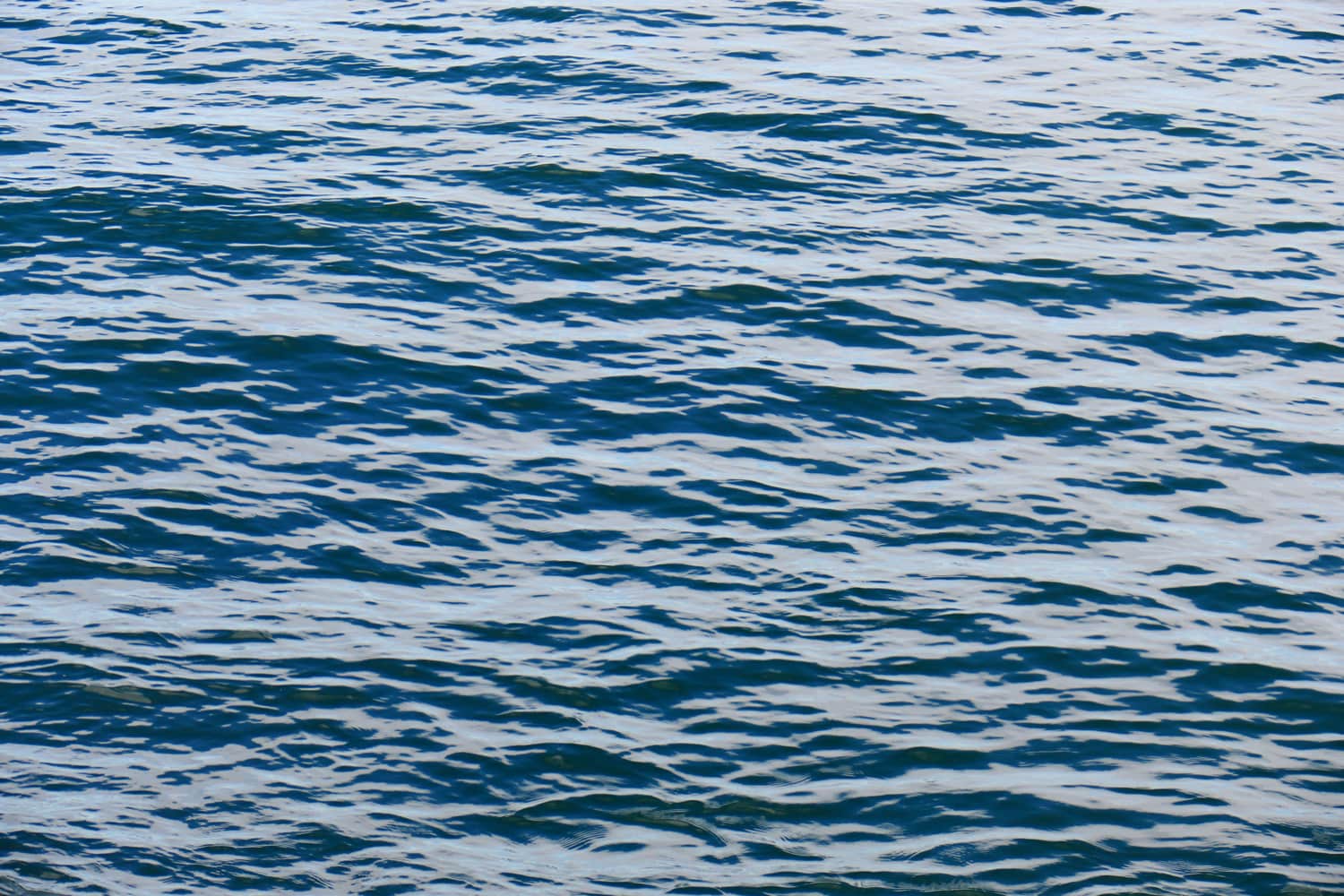 by two centuries of colonialism; the second
is the invisibility occasioned by the erasure 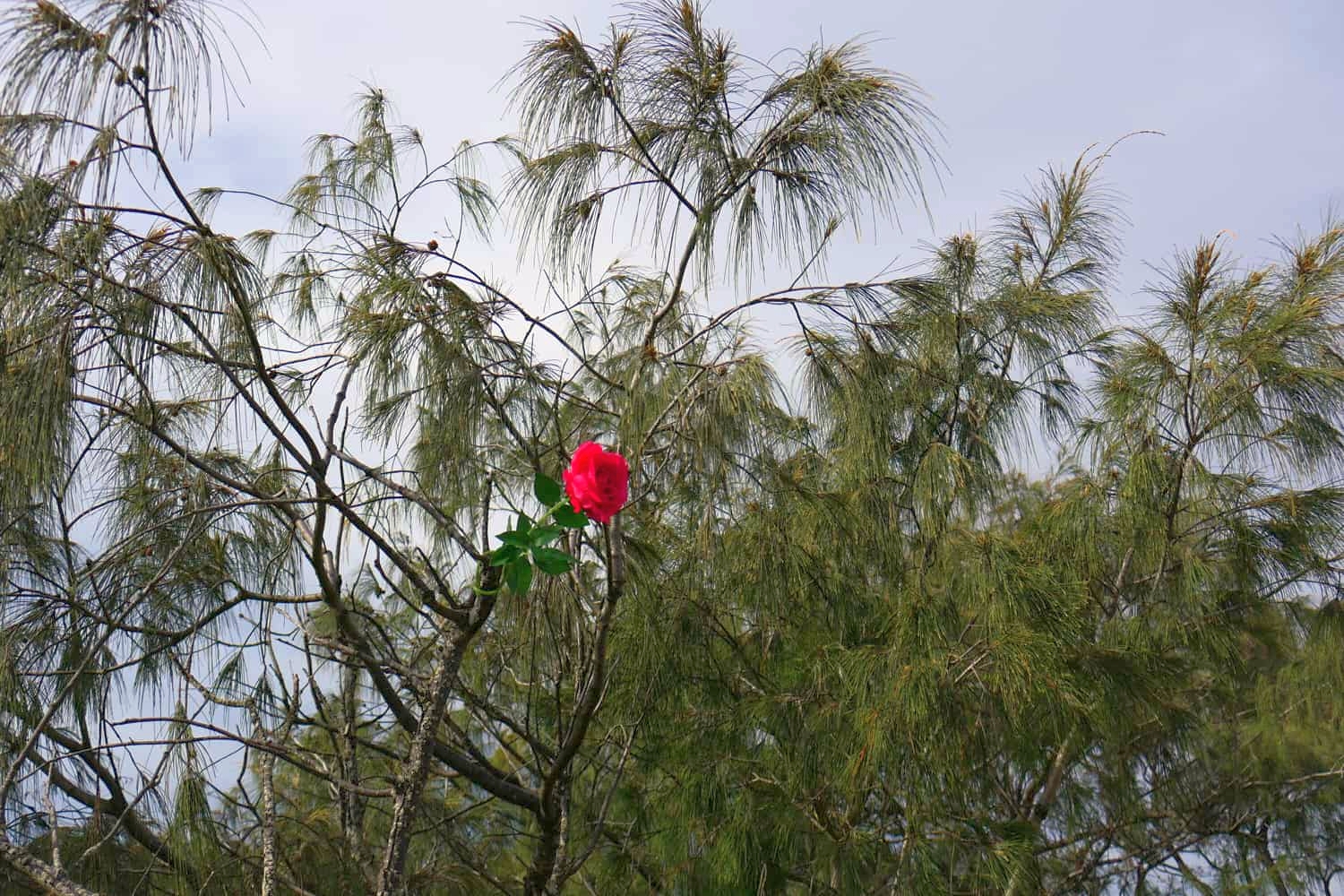 . . . they count this the most just cause of war, when any people holdeth a piece of ground void and vacant to no good nor profitable use, keeping others from the use and possession of it which notwithstanding by the law of nature ought thereof to be nourished and relieved. Thomas More, ‘Utopia’, 1516.

In the 1780s, the British government initially chose west Africa to transport its convicts. Richard Bradley was sent to negotiate the purchase of land and bought the island of Lemane, 400 miles up the Gambia River, from a local chief. But others claimed the island. The government eventually rejected Lemane because of concerns about disease. The next choice was Das Voltas Bay, on the coast of present-day Namibia, but eventually Australia was chosen. Joseph Banks had written, ‘This immense tract of land, considerably larger than all of Europe, is thinly inhabited even to admiration.’[3]

James Douglas president of the Royal Society warned Lieutenant Cook about local ‘natives’: ‘They are the natural, and in the strictest sense of the word, the legal possessors of the several Regions they inhabit. No European Nation has a right to occupy any part of their country, or settle among them without their voluntary consent. Conquest over such people can give no just title.’ 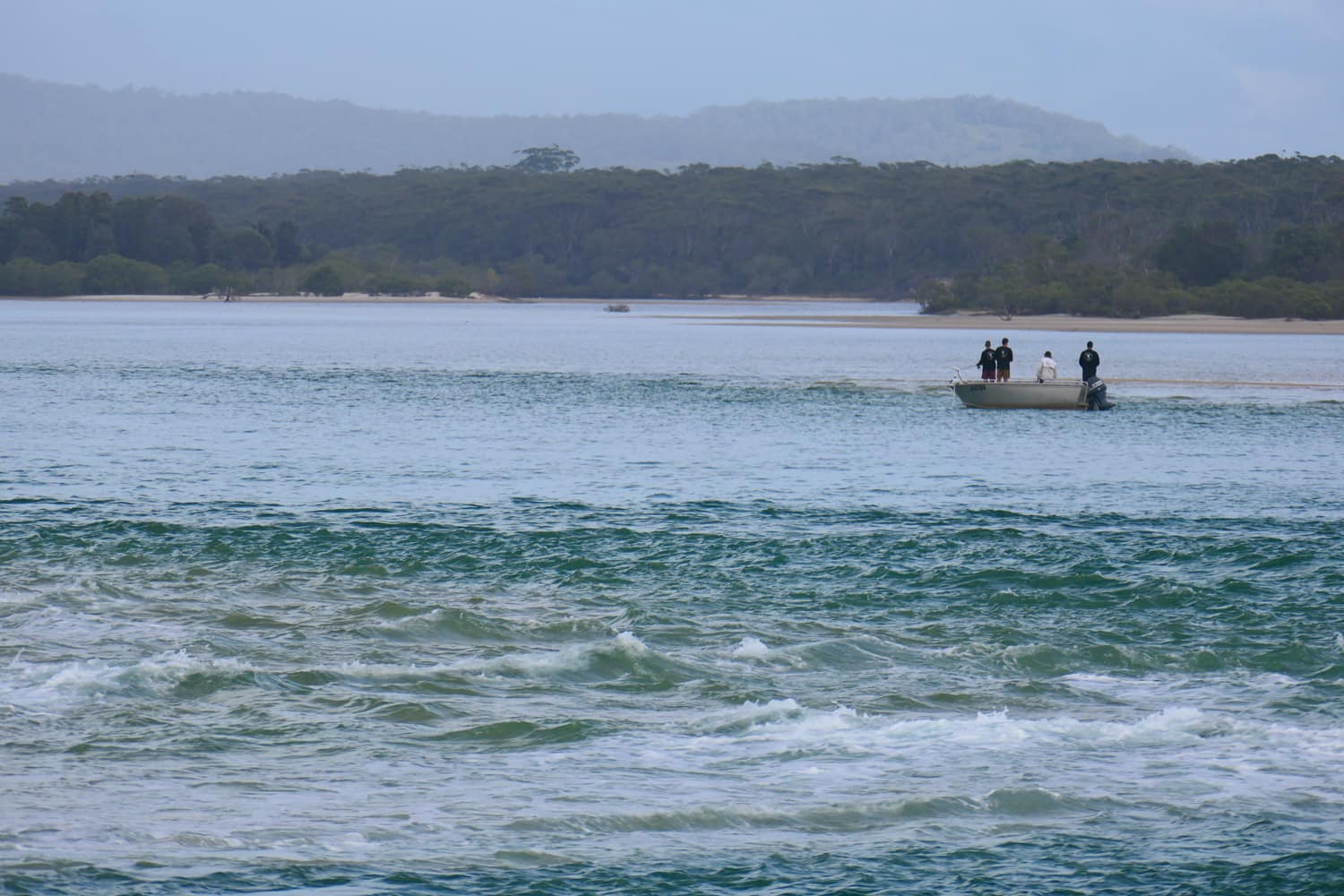 Governor Arthur Phillip had different instructions: ‘Immediately upon your landing, after taking measures for securing yourself and the people who accompany you as much as possible from any attacks or interruptions of the natives …, proceed to the cultivation of the land.’ And New South Wales was annexed as a ‘colony of settlement’. And as we know, so much blood was spilt over many generations. Our blood doesn’t rust even if it contains iron and oxygen because rust is formed when ferric oxide combines with water molecules. 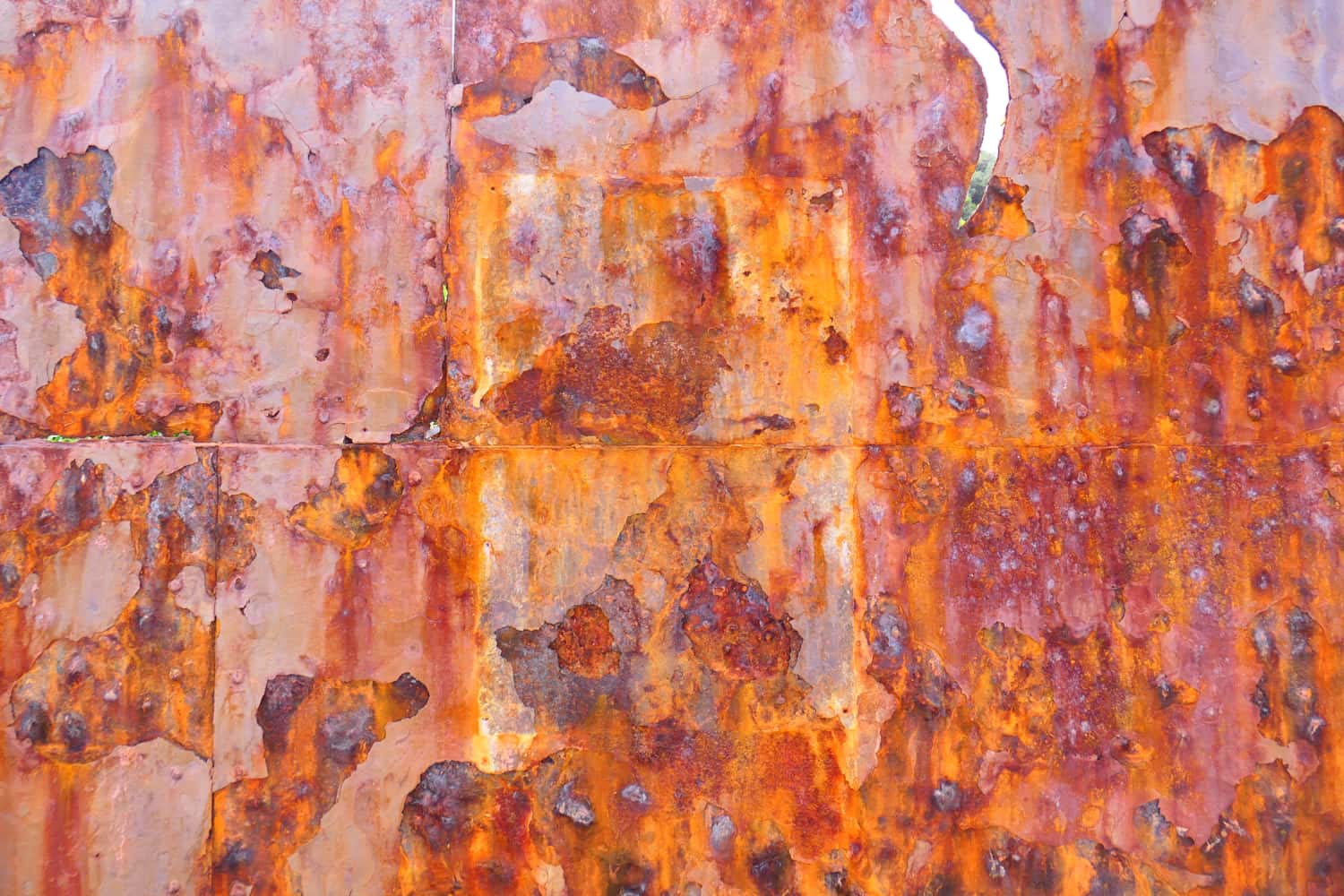 The British colonised New Zealand a few decades later, but signed a treaty explicitly recognising the Maori as owners of the land. The concept of terra nullius, or land belonging to no-one, remained the legal principle on which British colonisation rested. As late as 1971, Justice Blackburn ruled that Australia was terra nullius prior European settlement (the Gove land rights case). Only in 1992 with the Mabo case was this overthrown.

‘When asylum seekers from Lucky Miles arrive on our shores in Terror Nullius, they are greeted by Russell Crowe’s violent skinhead, Hando, from Romper Stomper, who … well, you probably can guess what he does to them.’ [4]

‘It was hard to imagine that rusting heaps of rubble could communicate these heroic inspirations which Hitler admired in the monuments of the past . . . By using special materials and by applying certain principles of statics, we should be able to build structures which even in a state of decay, after hundreds or (such were our reckonings) thousands of years would more or less resemble Roman models.’ Albert Speer Hitler’s architect [5]

Note: Much of Part 3 comes from Stuart Banner’s excellent essay, ‘Why Terra Nullius? . . .’

[5] Speer proposed ‘A Theory of Ruin Value’ in 1934. He explained this theory in his memoirs (1970): ‘To this end we planned to avoid, as far as possible, all such elements of modern construction as steel girders and reinforced concrete, which are subject to weathering.’ Angela Schönberger argues that this ‘theory of ruin value’ which legitimised the use of natural stone without use of iron was preferred due to iron being needed for the armament programme. See Cornelius Holtorf, ‘Theory of Ruin-value’ last updated on 17 January 2002 https://tspace.library.utoronto.ca/citd/holtorf/7.4.html