Is this my lucky anti-COVID bird?

The head shows orange slips, probably
wet feathers not a cue for juvenilia.
Christmas colours are neither here nor there.
The head is anti-viral red, protecting medieval
Europe from smallpox. Charles the Fifth
wore scarlet shirts and scarlet hose,
Elizabeth also tried the treatment
and decorated her rooms red all over.

I look eye to eye, hazel to golden clear as glass. He is seeing the same colours as I am, but much more vividly and sees the ultraviolet wavelengths. His eyes on the side of his heads so take in a huge field of vision, 300 degrees, but are monocular.

Birds have a third eyelid, the ‘nictitating membrane’, which helps keep the eyes clean of dust and pollen.

John Berger complains that our past intimacy with other species based on a reciprocity of looks across the ‘narrow abyss of non-comprehension’ is now reduced, not to a wide abyss but a simulation. [1]

Birds evolved from theropod dinosaurs in the Jurassic (circa150 million years ago (MYA)) and diversified to small, lightweight, feathered fliers. When a nine-mile-wide asteroid struck Earth 66 million years ago, it exploded with a force greater than a million atomic bombs and wiped out three quarters of life on Earth, including the non-avian dinosaurs. There’s evidence for total forest obliteration. Bird species were decimated. The only survivors were ground-dwellers, including relatives of ducks, chickens and ostriches.[2]

Parrots evolved about 80 MYA in Gondwana. Cockatoos split off around 65 MYA. Subsequent parrot species radiations then as Australia and New Guinea broke off from East Antarctica.[3]

King-Parrot appears to be increasing in abundance in well-treed suburbs. 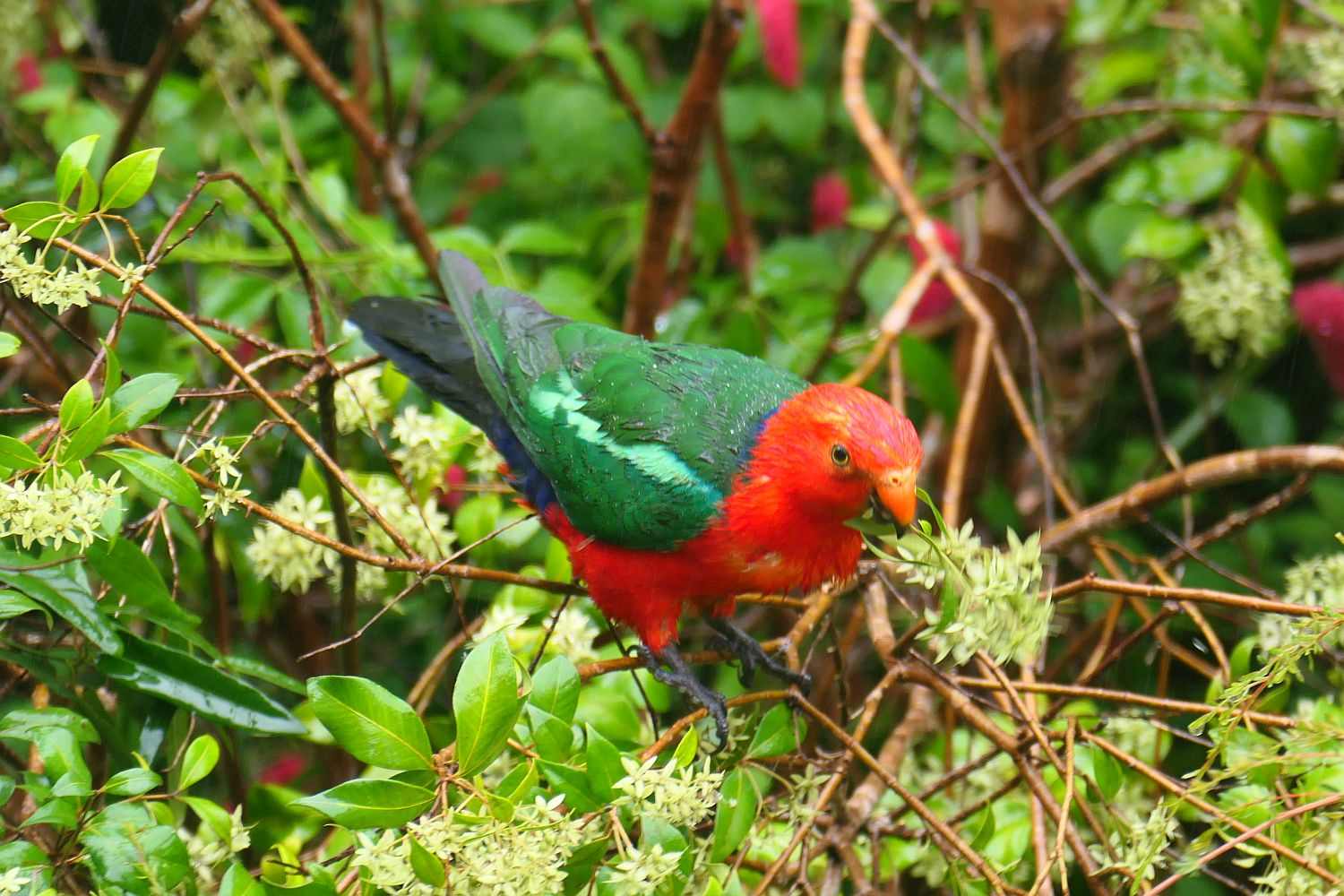 Parrots are not born with innate vocalisations. Like songbirds, they learn to sing (an excruciating racket at first) and their repertoire develops as they age. And like songbirds, most parrot species socially monogamous pairs and prefer solitary nesting.

Did we count great, O Soul, to penetrate the themes of mighty books,
Absorbing deep and full from thoughts, plays, speculations,
But now from thee to me, caged bird, to feel thy joyous warble,
Filling the air, the lonesome room, the long forenoon,
Is it not just as great, O Soul?
Walt Whitman, ‘My Canary Bird, : New York Herald.  March 1888.

‘Australian King Parrots  . . . patience and persistence is the key. For a treat, try putting out some fresh fruit and vegetables such as crunchy sliced apple and fresh crisp lettuce.’[4] 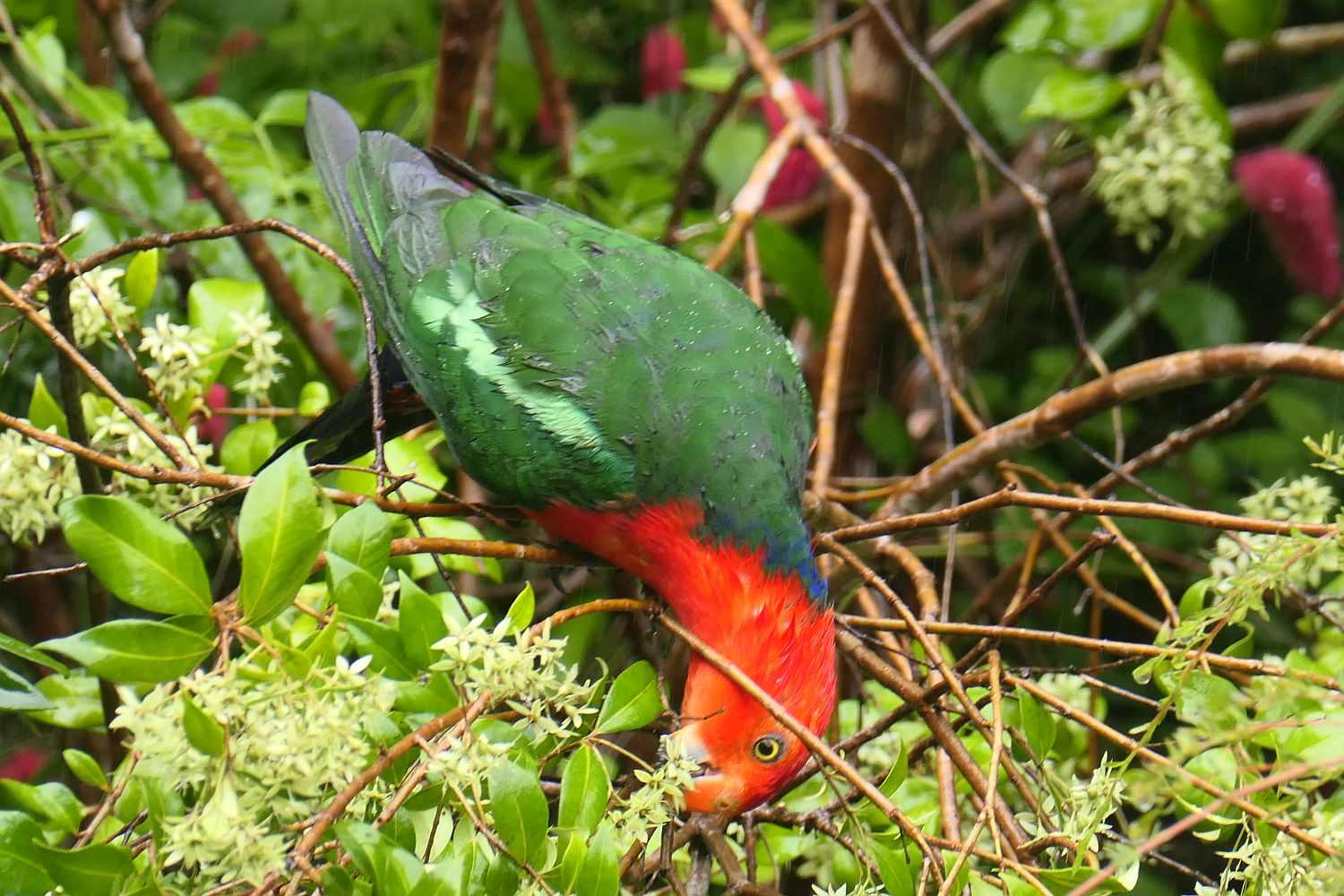 ‘Parrots are among the smartest of all birds. . . The forebrain, a part of the brain involved in intelligence, is structured differently in birds than in humans and other mammals. Parrots must have evolved their intelligence along a separate evolutionary path from the one taken by humans and their close relatives, the apes and monkeys. However, when scientists studied parrot genes . . . they found that regions of the parrot genome that regulate when and how genes for brain development are turned on are different from many other birds. These regions appear to have separately undergone some of the same changes as those found in the human genome. All of this would appear to be an example of what evolutionary biologists call convergent evolution.’[5]

‘If you are looking to adopt one as a pet, try contacting your local exotic bird club or parrot society and ask about breeders in your area. In Australia, breeders sell Australian king parrots in the range of $100 to $500. Since this bird is scarce in the U.S., you can expect to pay upwards of $1,000 for one.’ [6]

The songbird in its cage sings not for joy but rage. Italian proverb 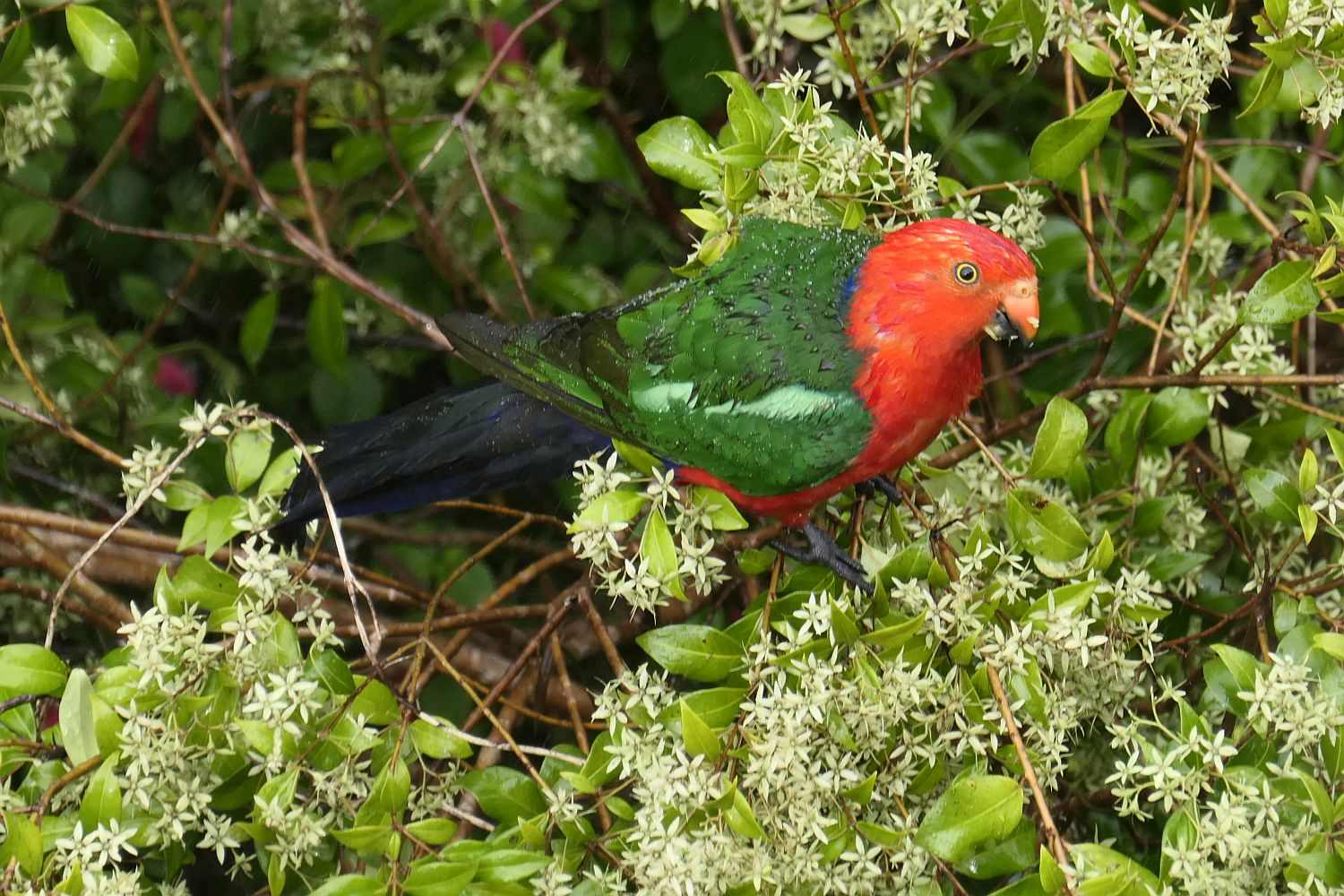 The Sumerians, the oldest know literate culture had a word for birdcage (subura). Ancient Egyptian caged birds for their beauty. And not just caged, millions of votive ibis mummies were dedicated in Egypt during the first millennium B.C. ‘In ancient Egypt, Sacred Ibises were collected from their natural habitats to be ritually sacrificed.’[7]

‘Australian king parrots are not overly affectionate birds, and most do not like handling. While there is the occasional exception, it is rare for a king parrot—even one that was hand-fed as a baby—to bond as strongly with their owners in the same way that cockatoos and some other parrot species do. If you are looking for a cuddly parrot, then this is not the best species for you.’ [8] 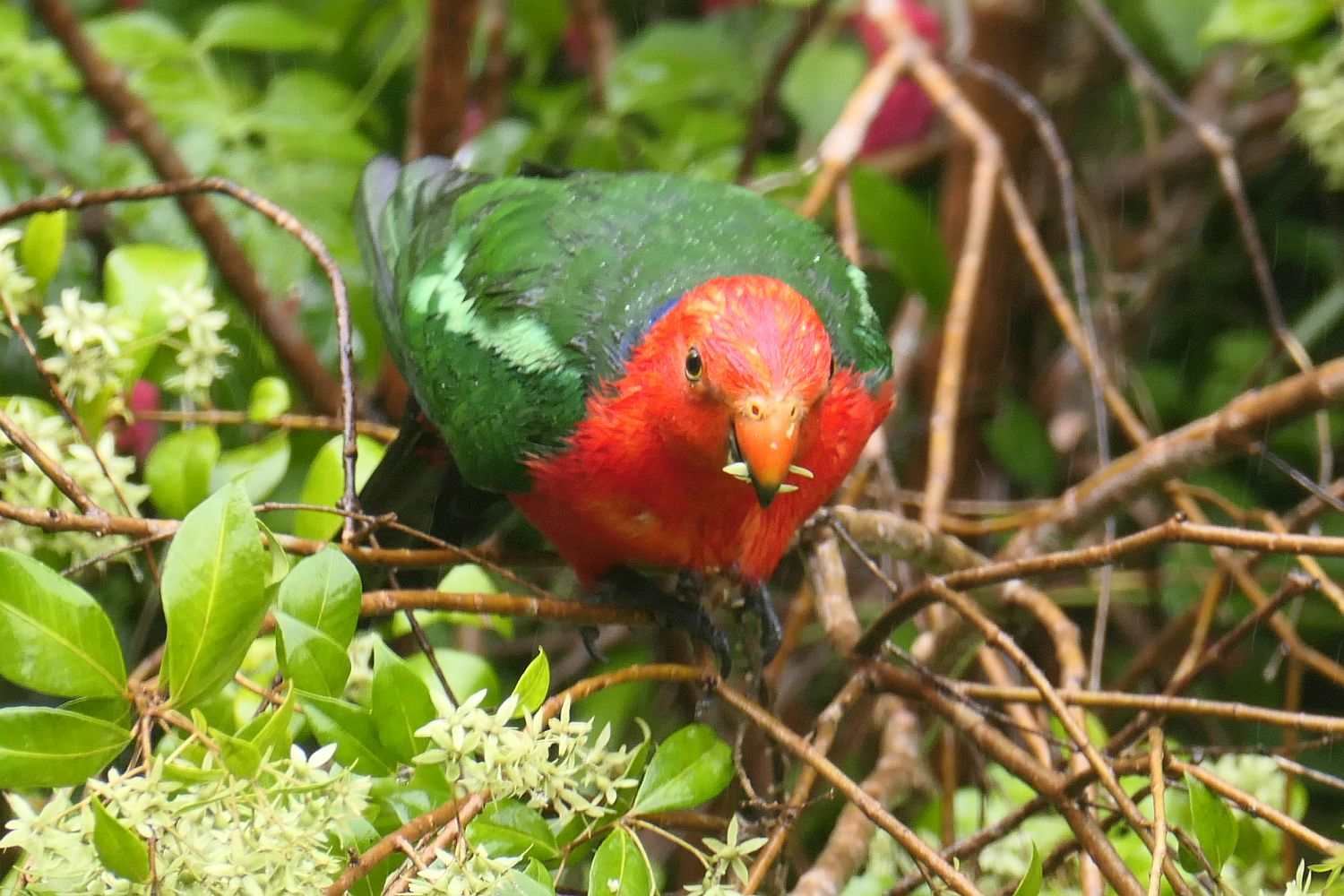 Pliny the Elder claimed that Marcus Laenius Strabo of Brindisi, ‘began our practice of imprisoning within bars living creatures to which Nature had assigned the open sky.’ [9]

Even birds bred in captivity are ready to fly, flight is the wonder of birds.

. . . My heart in hiding
Stirred for a bird, – the achieve of, the mastery of the thing.
Gerard Manley Hopkins, The Windhover, May, 1877.

‘From time to time we have for sale Superbs, King Parrots and Regents. We generally do not carry many of these in stock as a Wildlife Licence is required for these birds and the general public do not have a license.’[10] 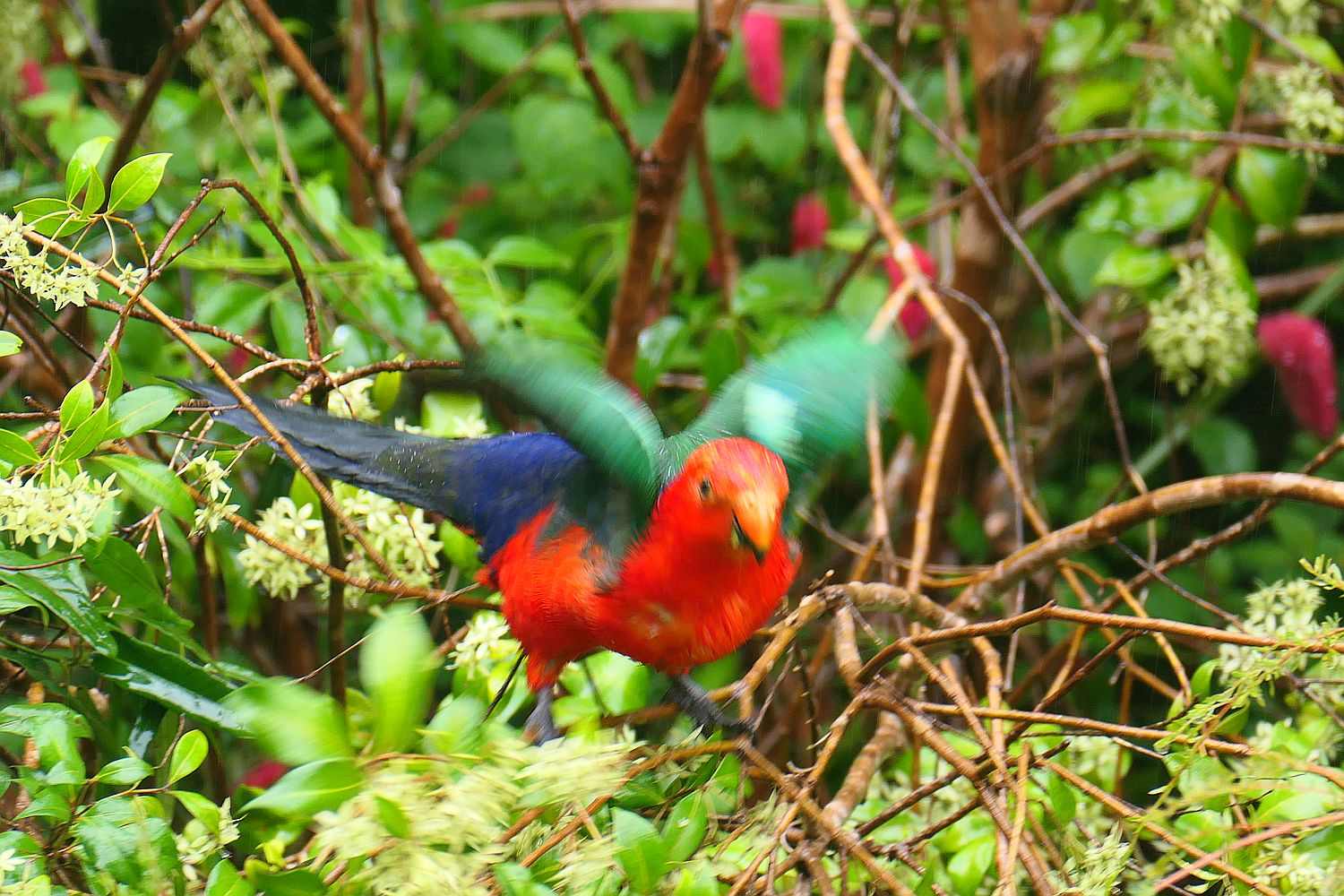 It’s light but the Flying Foxes are already flying past  into the forest, though one heads south in the opposite direction. This King Parrot left the Grey Myrtle hours ago and will now be roosting

In becoming dark, a Black Cockatoo gnaws away on a note.