Learning to draw in the natural world brings joy – especially in lockdown. The Guardian

A 520-million-year-old, five-eyed fossil reveals arthropod origin: Arthropods have been among the most successful animals on Earth since the Cambrian Period, about 520 million years ago. They are the most familiar and ubiquitous, and constitute nearly 80% of all animal species today, far more than any other animals. phys.org/news/

Defunding Regional Arts NSW won’t ‘make funding stretch further’ – it will only hurt artists and communities. In a year when regional tourism has been hit so hard by bushfires and COVID-19, why is a crucial NSW regional arts body being cut? The Conversation

“Put bluntly, you sometimes need to acknowledge that you have no fucking idea what you’re looking at.” Ben Eastham makes the case for embracing uncertainty in art. Lit Hub

Waking, gulping pure sounds, a Pied Butcherbird variation not recognised – four pure clean whistles, as if a milkman from the sixties was sitting up a tree. I don’t notice any other sounds for a while, pure music closing down the night or opening the shutters on a new aural day. Kookaburras start laughing. 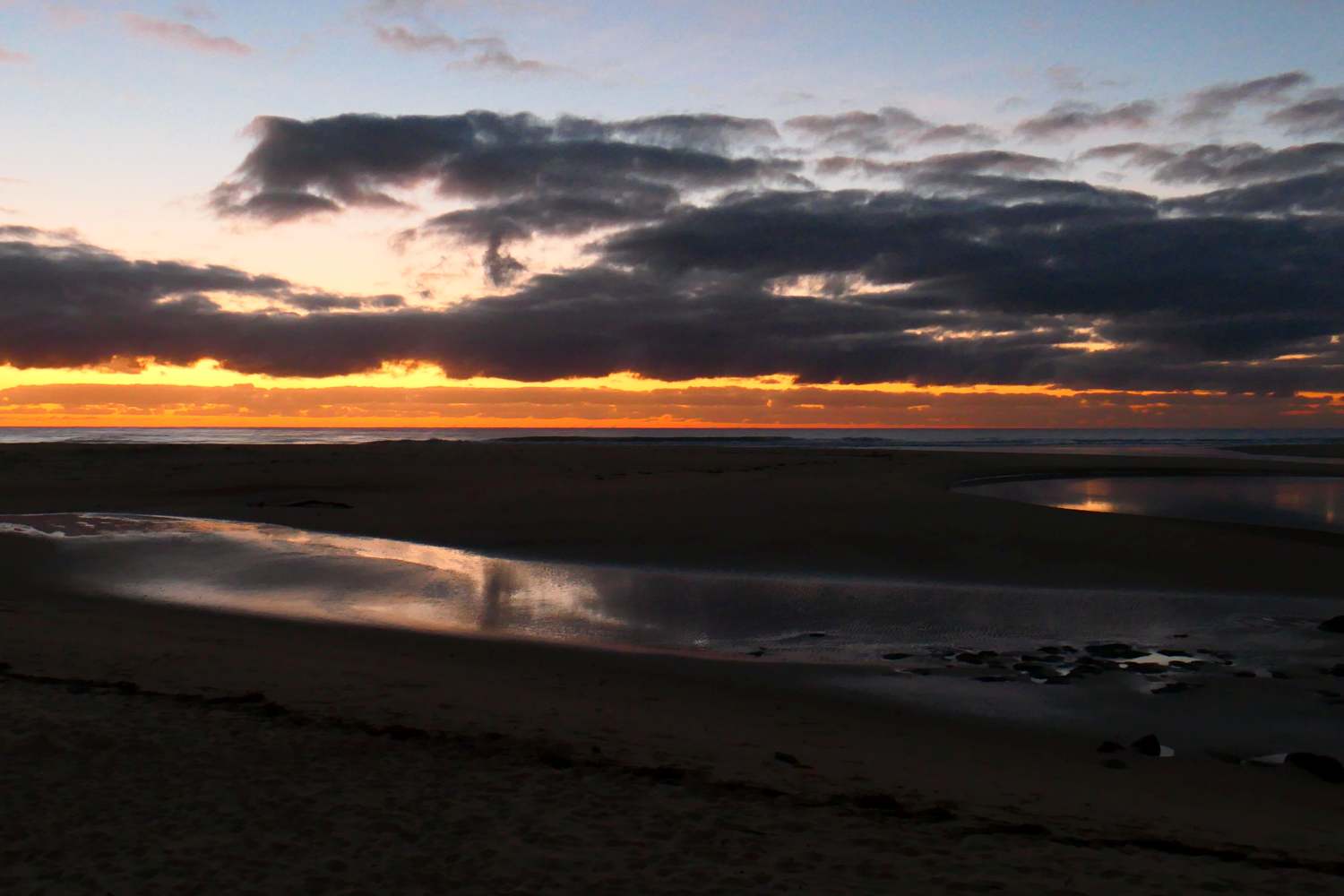 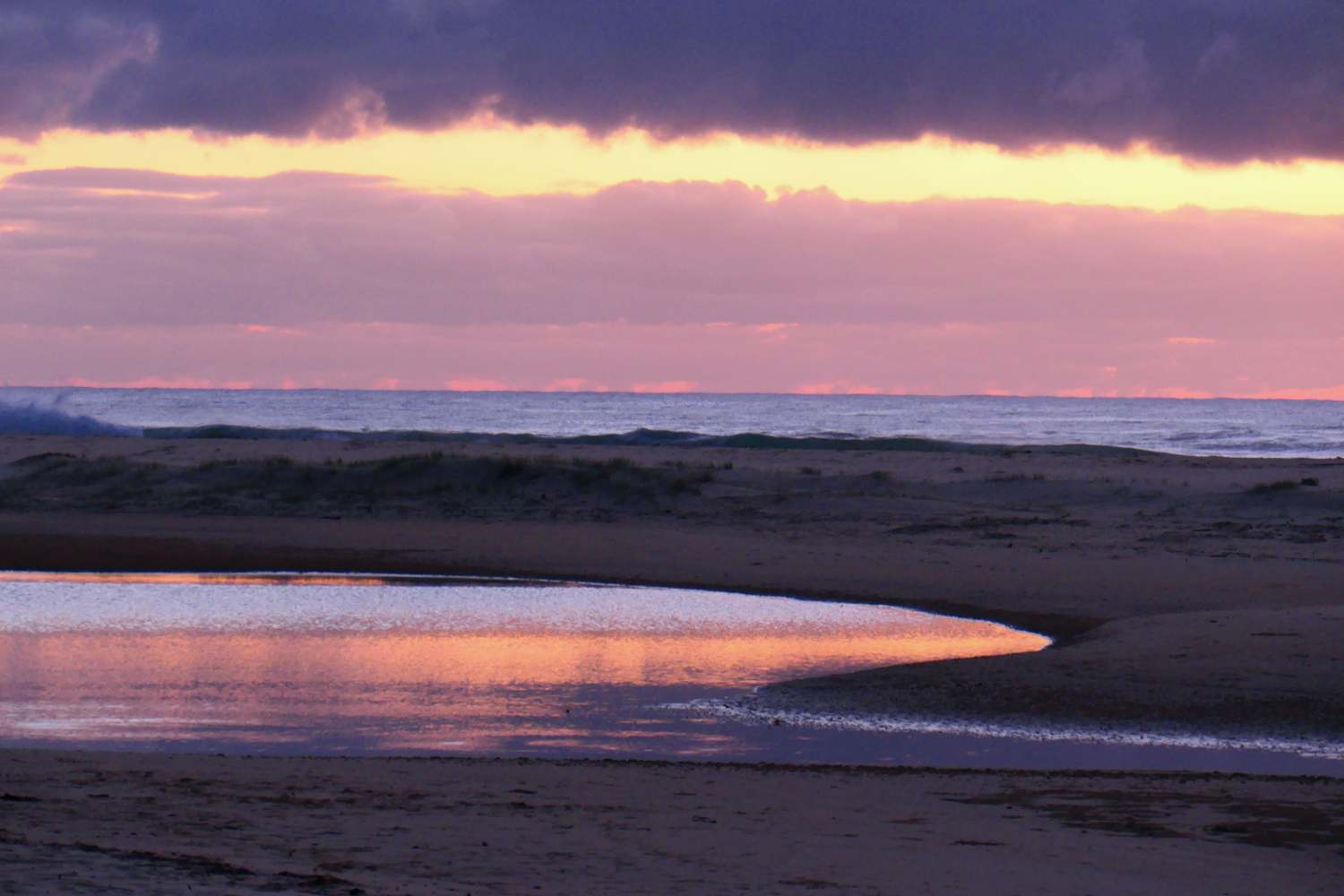 I head down to the monumental estuary, the lagoon has been refilled and glows a shoreline, the skin embossed by goldbeating, the breeze the finest ancient craftwork. The Venetian Marino Menegazzo works in Titian’s old studio and hammers gold into sheets 200 times thinner than a human hair. ‘The leaves being laid in the libretti [booklets] are so fine that they cannot be touched by the human hand; so fine that they can wrinkle as soon as they hit paper; so fine that the wrinkles can be smoothed away with only the faintest puff of breath. It’s like working with spider silk.’[1]

Fish jump perforating the stillness, the harmony of the spheres in diagrammatic form. Magpies fill the tops of two dead trees, their silence intense. As the horizon hoists illumination groups glide onto the beach and start fossicking. Ten minutes later they fly back up and start singing, Helios still away. The horizon uncoils almost too thin for reality. Just how much can be emptied from the day by day accumulation, the web of experiences and memories – and afterwards? Trust in the breath. 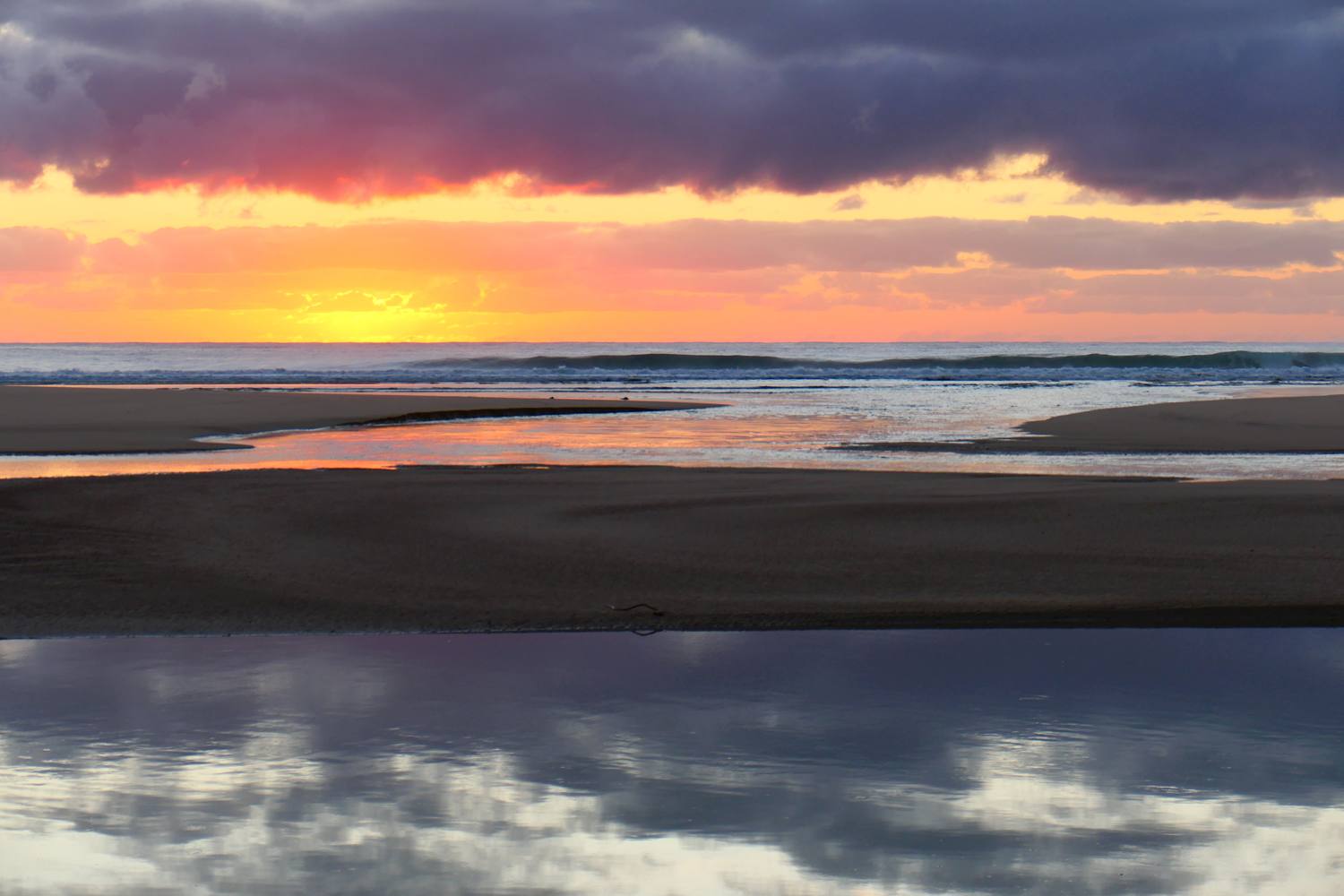 A cool blue paints the body in stasis, 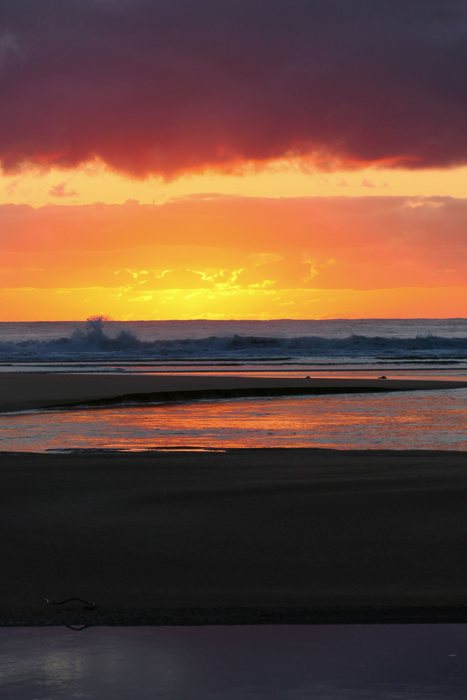 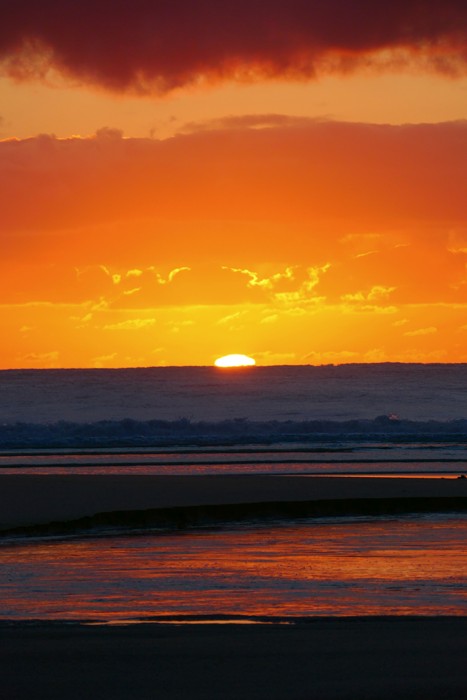 Landscape is not just pictorial; it is habitat, livings, homes, cultural.
Rivers and their landscapes or riverscapes are made up of multiple places, created by multiple processes and practices and therefore hold many place meanings simultaneously, all the while retaining a conceptual identity in their own right. Andrea Faminer[2]

Tiger Moths fly round me. 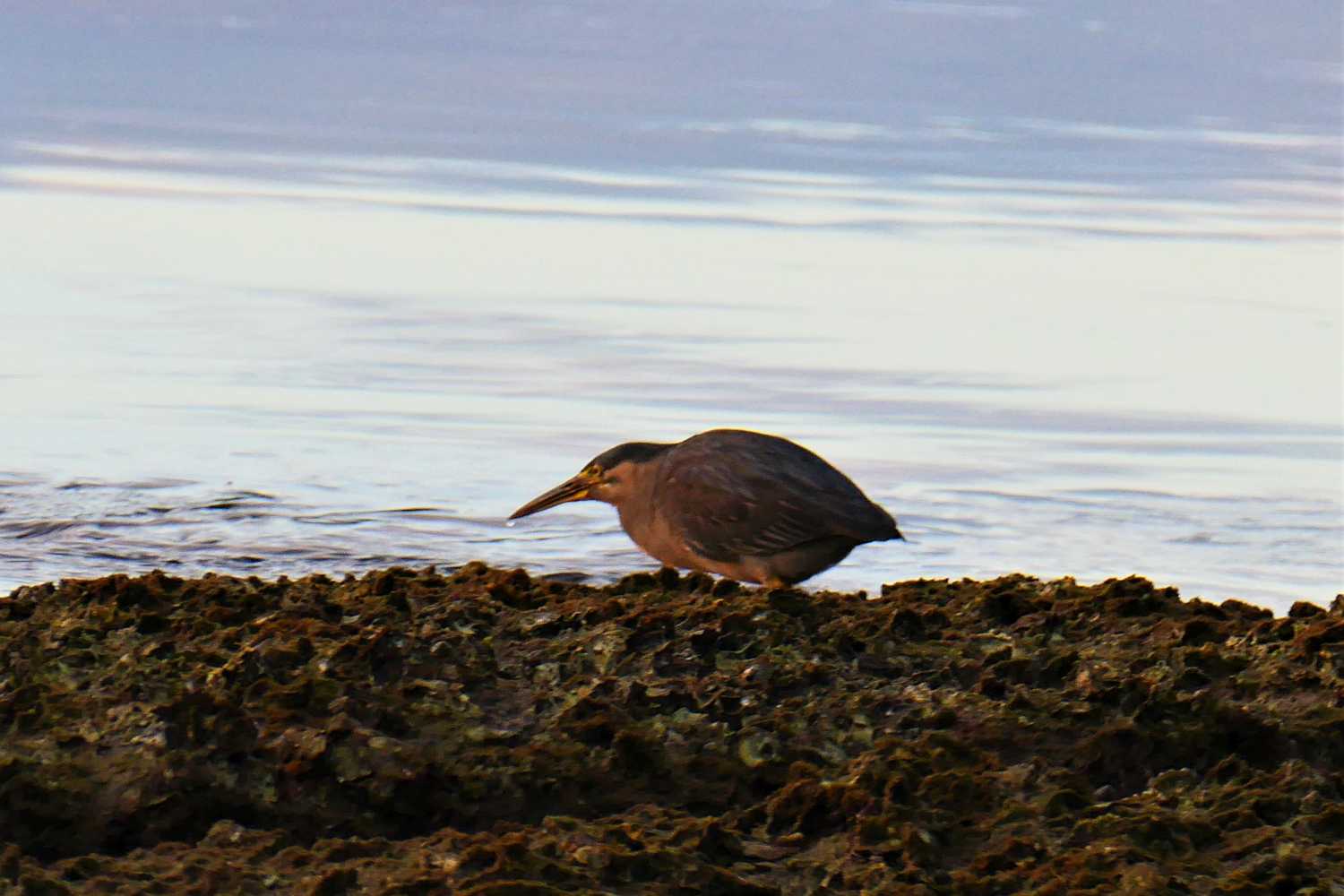 I watch a Striated Heron fish. I should use the definitive artifice, this is his patch, and today he has found a spot and does not move. Darts its long bill in a few times, delicate lacework unravelling the surface, stops, waits, attacks the water again, occasionally a sliver of light is gulped down.

A Magpie is eating in front of me, a poisonous centipede. It knows what it is doing.

I cook omelettes for breakfast, we eat on deck, the first cicada of the season whirrs the garden, high pitched, a small species

An alto call, a dee de dee, light yet saddling the air. Searching the face of the forest – the army of trees, each unique, the crooked accidents, the fresh foliage, cracked shadows among the stiffened wood of the tallest Blackbutts – the jewel appears quietly preening. A jewel from the creation of all, from the gooey clay I side-stepped at dawn, to the brilliant rise of Helios. 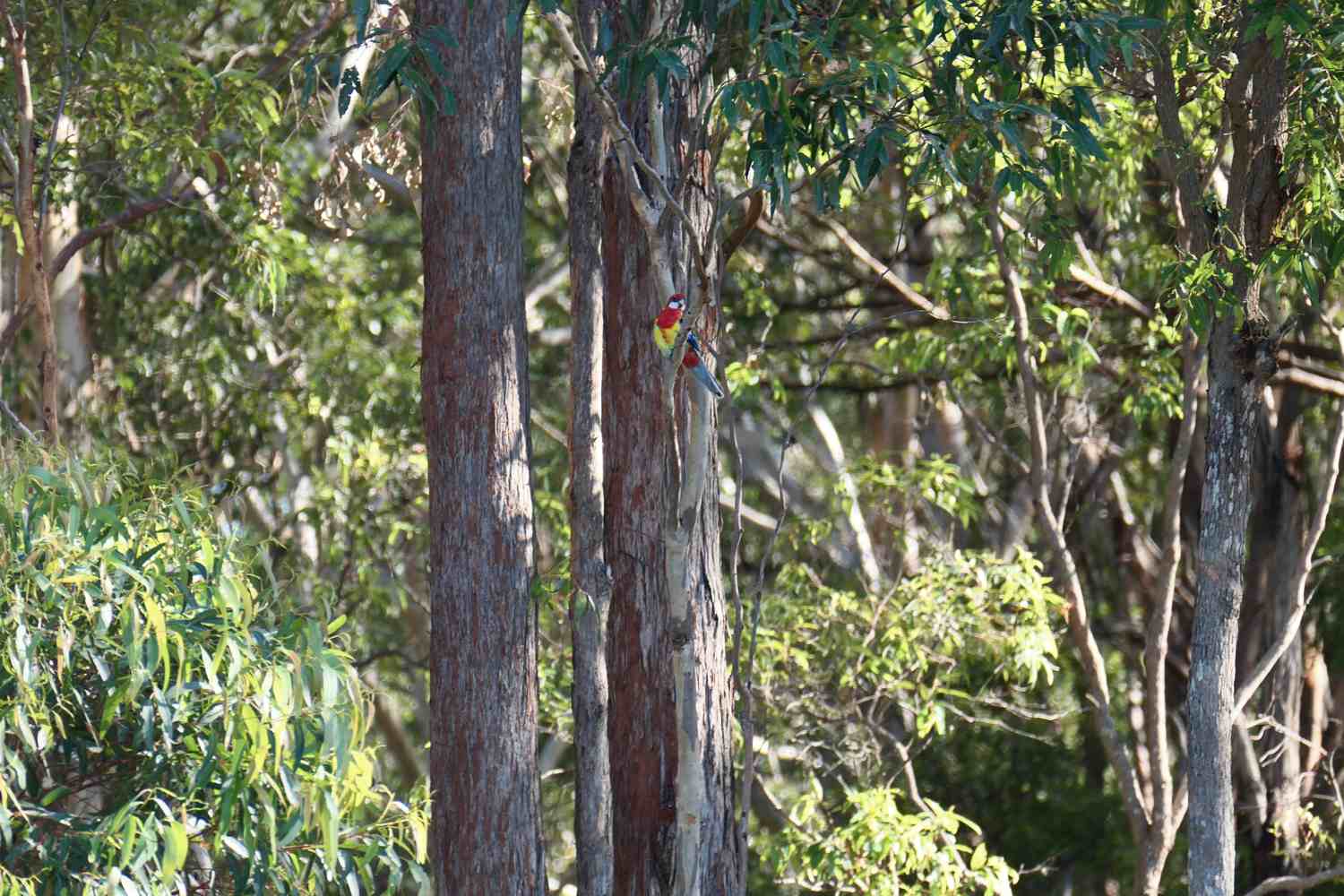 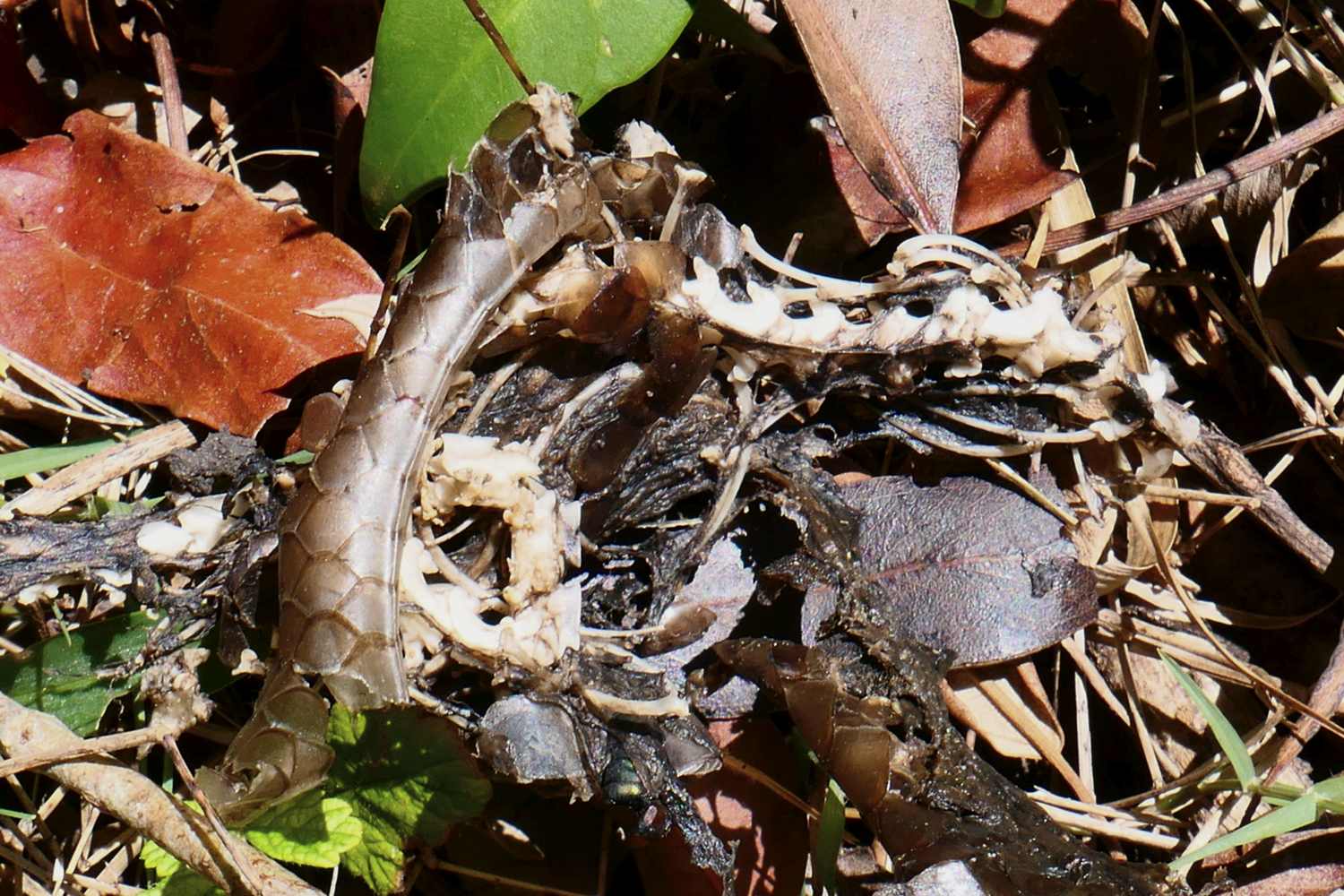 The stink we track down to an unlucky tangled where chicken wire joins bird netting. We hadn’t seen it, strung against the wire like a camp victim, skin and bone, life squeezed out of its sheath looking
too large for the spine, bits of meat caught in its teeth. Was it shedding and vulnerable? Caught in the wire?

Back down to the estuary for a swim with friends. 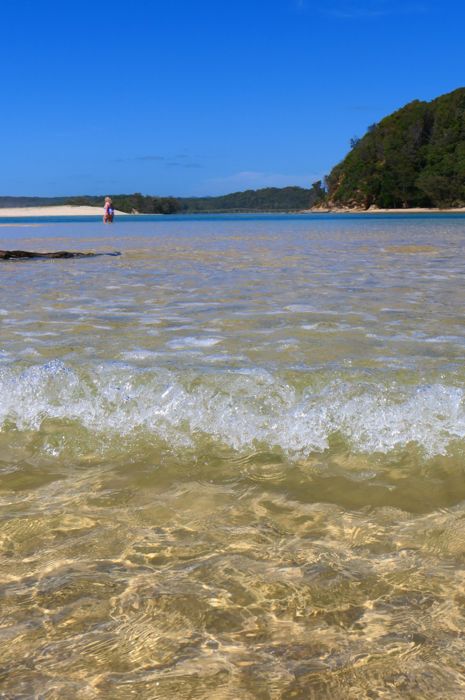 Floating, watching a Brahminy Kite float along the edge back and forth, shadow’s bumpy ride surfing the treetops. Treading water, Alan laughs at my jokes. 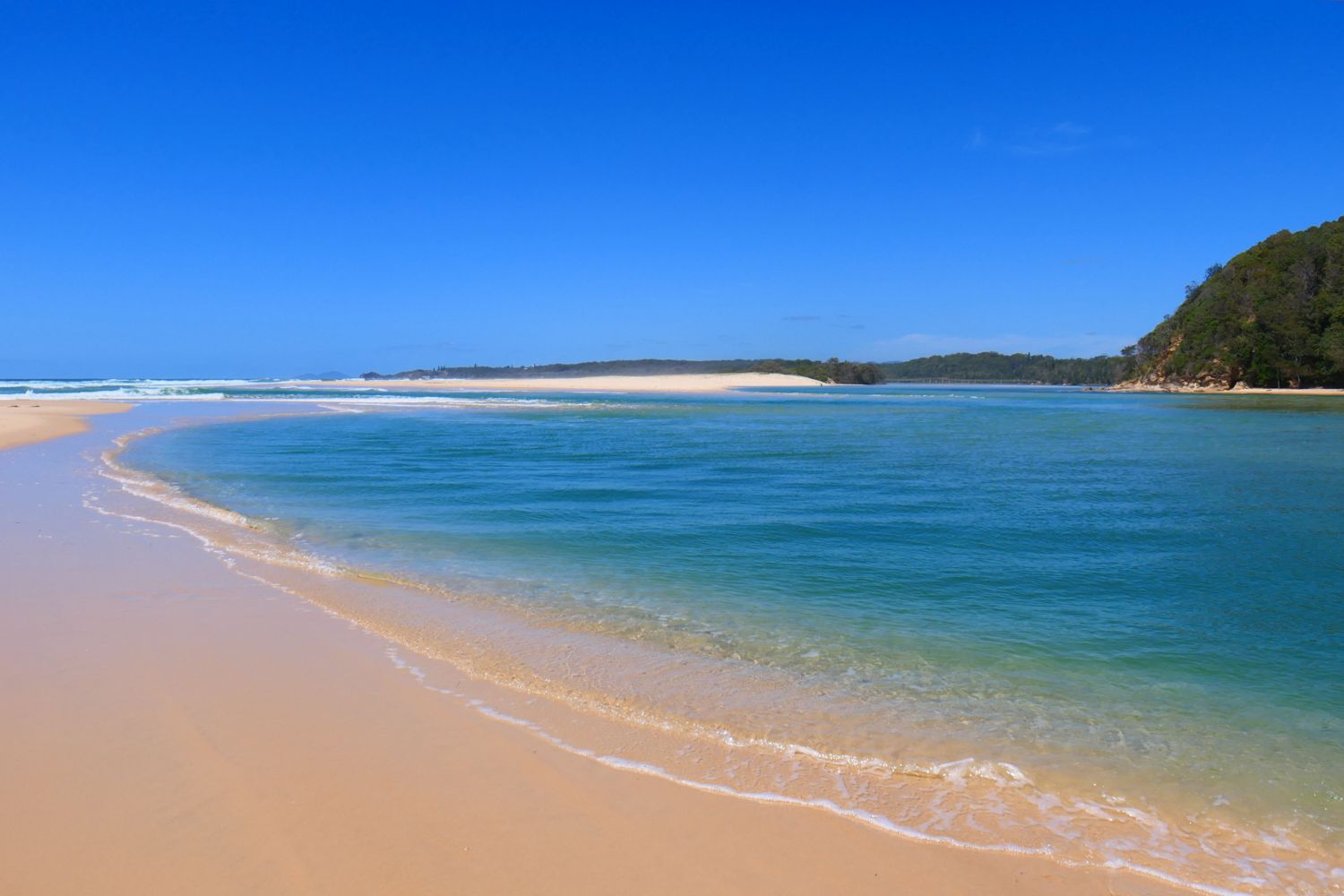 I take the estuary back to the sea, nearly lose my balance as a wave hits. The blues look photoshopped even without my sunglasses. Alan is floating away, Wyn is leaving on a breast-stoke, I’m on my back twisting my body head still, blinking away the splashes, watching heaven’s expensive hue. 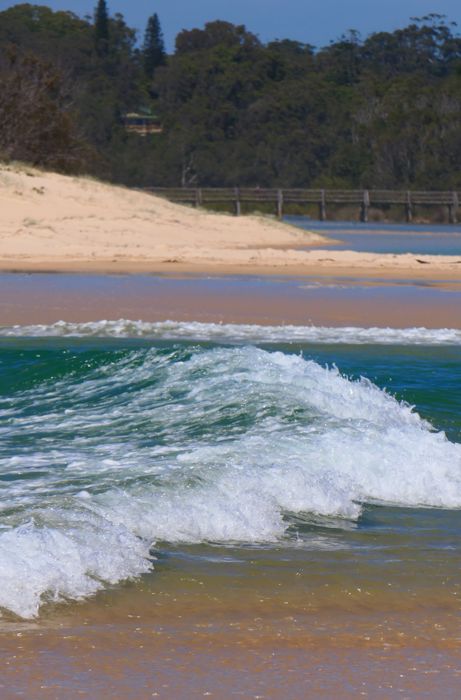 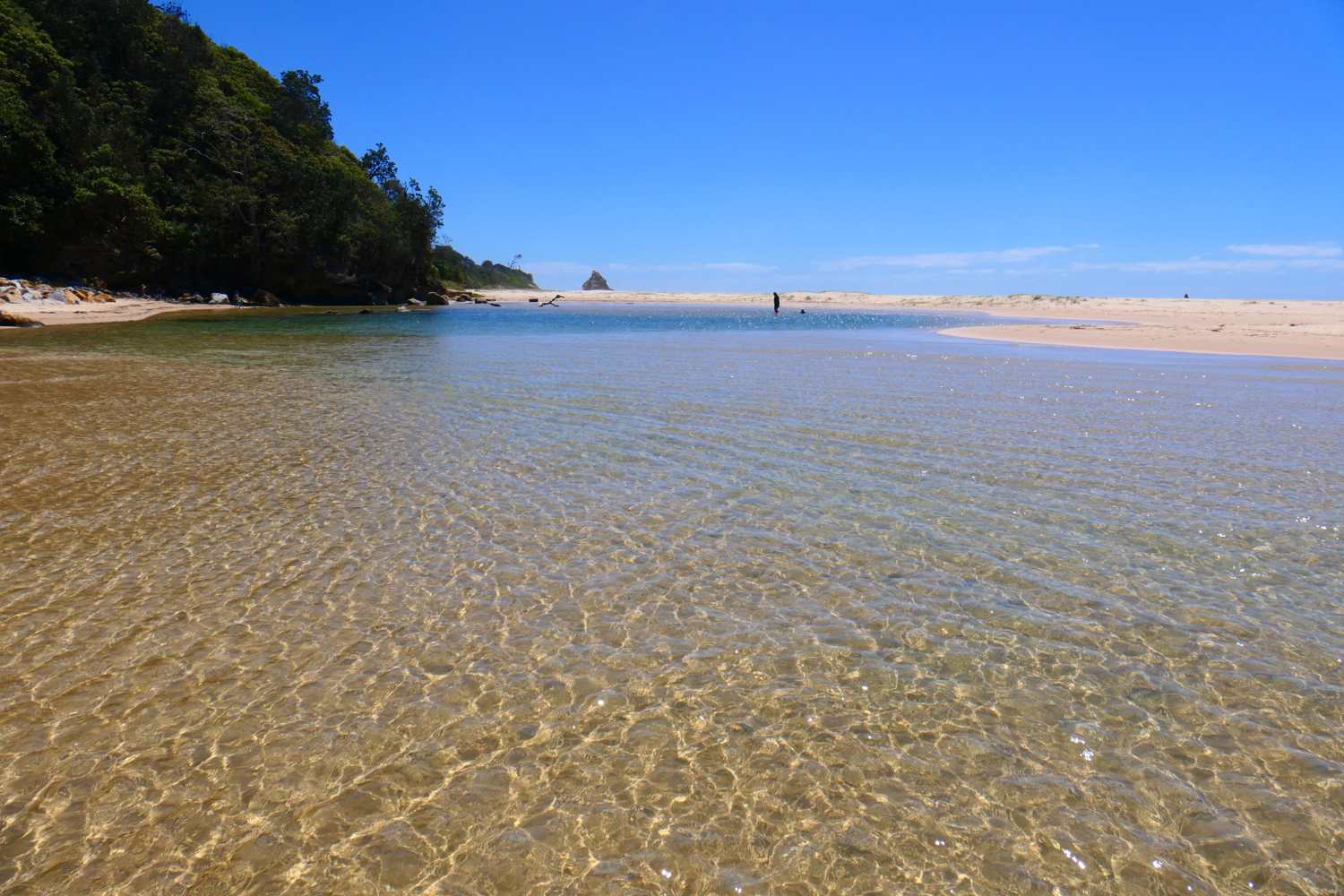 The sky shaved clean of all cloud
leaves plenty of room for birds.

I’m slipping on sandstone with sleeves of clay, following a new song, not heard here before. Birds are calling along the edge of the river, thirsty to make place, and I can’t place the call, or see one. A clear whistle, that sounds like, ‘I miss you’. I never go for these equations, bird song speech never makes sense (usually). I find the minstrel, a Black-faced Monarch.

Close by is the Striated Pardalote’s hole in the bank, I thought I heard it call, now Whipbirds, Fairy Wrens, Willy Wagtails and honeyeaters are joining in.

Lunch with M&M overlooking the Nambucca, a digestive walk to the end of the seawall notched into the churn of the next world.

A rusty ship’s wall holds images of shipwrecks and their stories, lives liquidated, cargo lost. The Royal Tar built on the curve at Copenhagen Mill, I have photographed the remaining timber slides before Launched 1876, it was leased by the socialist William Lane. 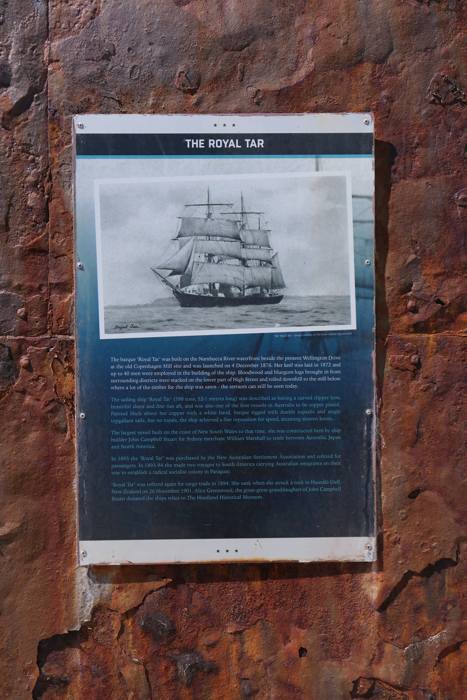 After the collapse of the 1891 Australian shearers’ strike, Lane realised there was no hope for utopia in Australia and in 1893 set sail with settlers for Paradise in New Australia.

Wealth and Poverty both seem to degrade most of us. William Lane [3]

The War of the Triple Alliance is probably the most proportionally destructive conflict ever. It was annihilation; 90% of all Paraguayan men died from battle, famine or disease, and 50% of the women. Paraguay’s new government wanted to repopulate their ravaged country and gave the New Australians 75,000 hectares of farmland near Coronel Oviedo in the centre of the country.

They maintained ideals of no personal property with everyone working for the benefit of the community and from the outside all seemed well. They worked the soil in the humid, mosquito-infested fields, but like Lane’s strict rules on no alcohol or mixing with ‘natives’ were unpopular, along with his autocratic style.

In July 1894, sixty-three settlers loyal to Lane made a new start at Cosme a little to south. The writer Mary Gilmore lived in New Australia and then Cosme and commented on the utopian venture in a 1959 interview: ‘The reason it had to break up, or disappear, is because William Lane would only have British people in it. . .’ [4]

Cosme failed too. Ill, worn out and disillusioned, he and his family sailed for New Zealand in 1899. He joined Auckland’s conservative New Zealand Herald, becoming the editor. Writing under the pseudonym of ‘Tohunga’ (Maori for prophet) he denounced the unions and industrial lawlessness, advocated universal military training and stoked patriotic favour for the World War.

Many people do become more conservative as they get older. And if you are fanatical one way you can swing fanatical the other. For example, ex-Communists helped to launch National Review in the USA.

A cormorant excretes tiny stars as it dives, twists and turns into an archaic look. 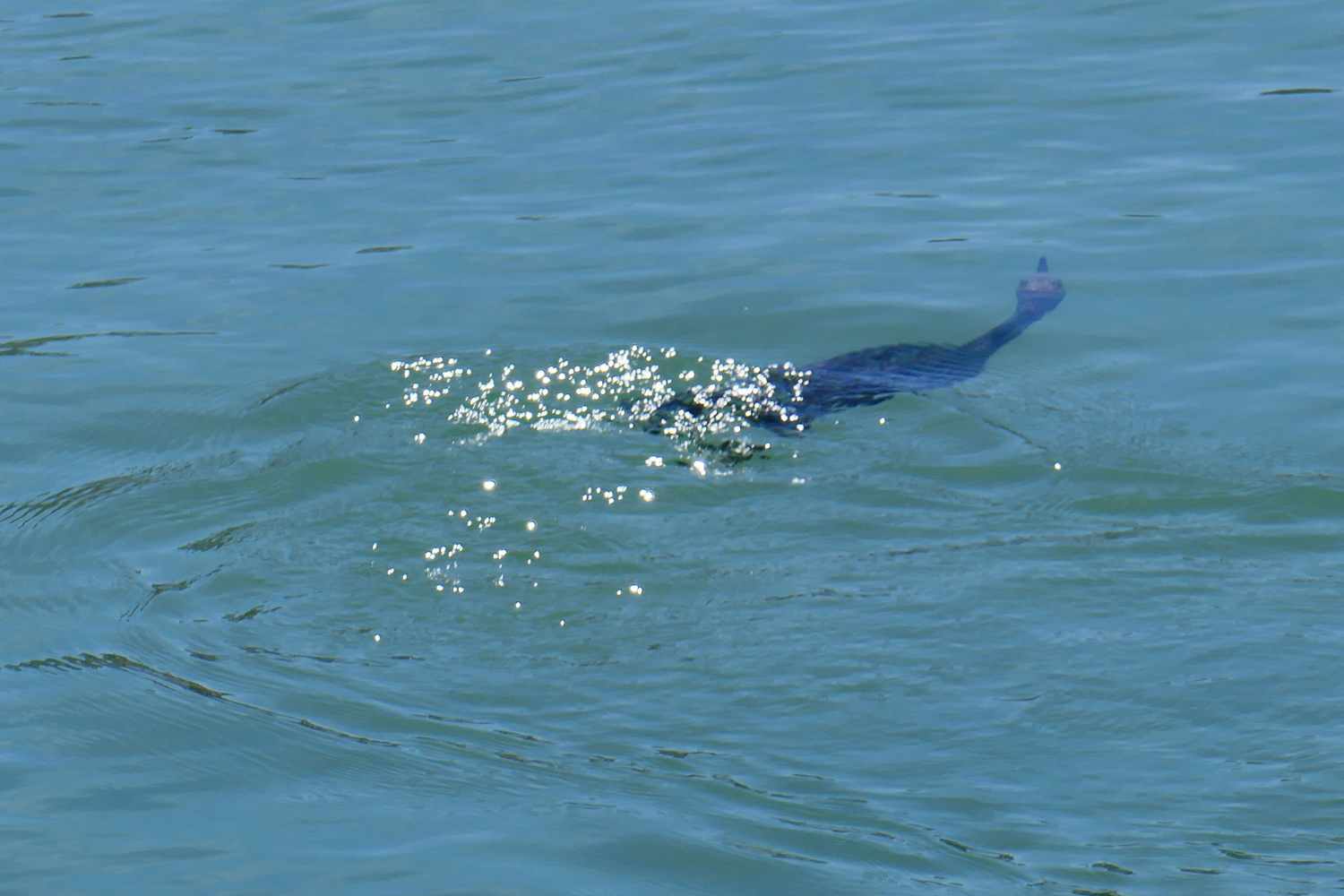 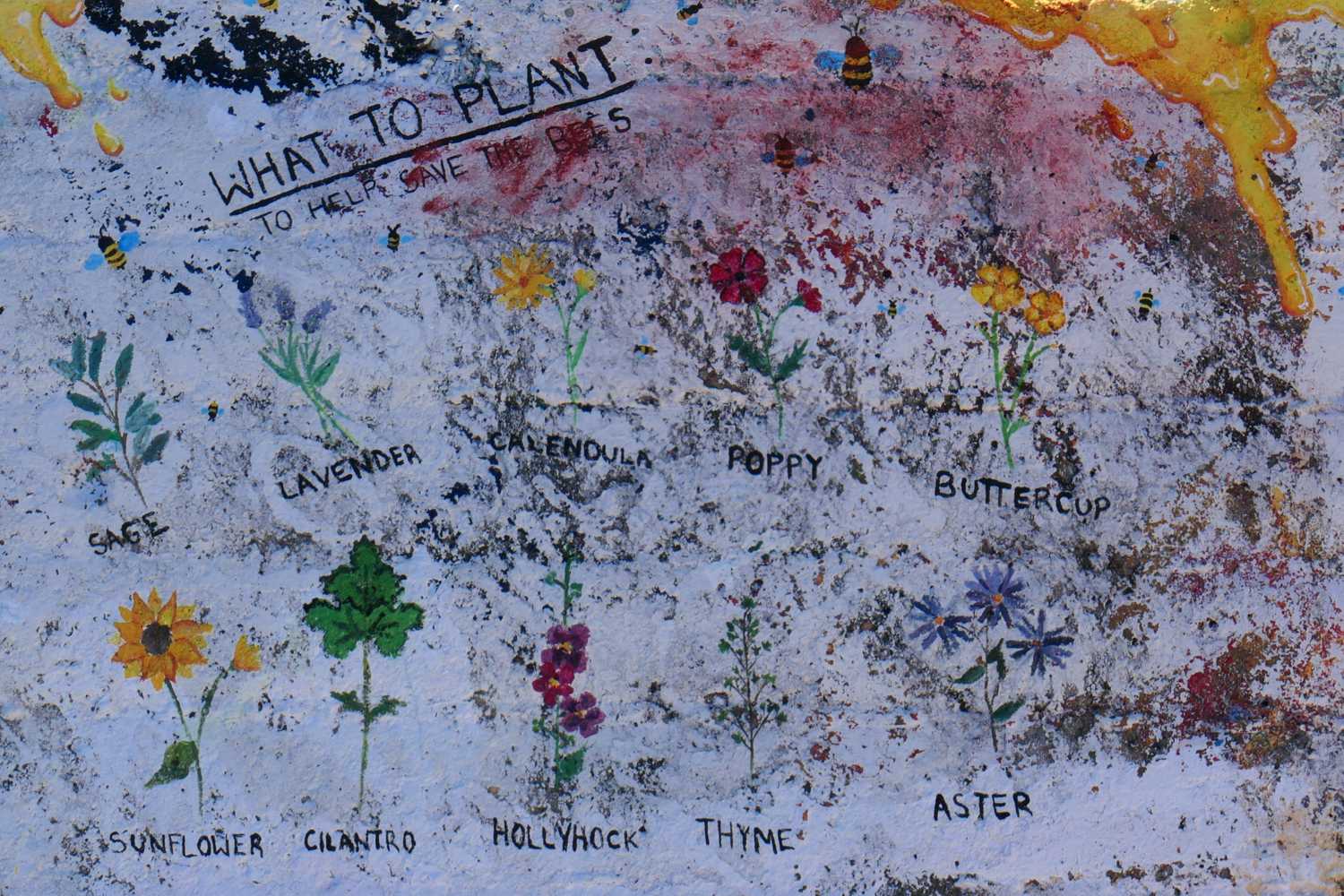 Help Save the Bees is simply beautiful public art.

The US elections are so chaotic, and the sparring so puerile and undemocratic, I am avoiding the news.

The Victorian government has cut down a tree [The Directions Tree] that was culturally significant to Australia’s Indigenous Djab Wurrung women to make way for a highway in the state’s west. Guardian 27 Oct

‘This massive and strikingly beautiful 350-year-old Yellowbox tree with distinctive swirling bark, had been planted as a seed with the placenta from a Djab Wurrung child’s birth and its branches actively shaped and directed over time.’[5]

The Fortingall Yew in Perthshire is Europe’s oldest tree at over 3,000 years old, was already a veteran when the Romans arrived. Often ancient yews predate the churchyards where they stand, because they marked ancient, sacred sites on which the relatively new religion could be built. Fiona Stafford [6]

We have been asking council to develop a Significant Tree Register for many years. I have never named a tree. Looking out at the forest wall, there are only a few trees I find memorable and could describe. The large Blackbutt with the horizontal nest hole, currently being used by Dollar Birds, before that Rainbows and before that Galahs. Then almost opposite a young Pink Bloodwood arching neatly over the entrance, and which had a Miner’s nest last year.

What times are these, in which
A conversation about trees is almost a crime
For in doing so we maintain our silence about so much wrongdoing!
Bertolt Brecht, ‘To Those Who Follow in Our Wake‘, 1939

Remember the koala war that almost tore the NSW Coalition in two a few weeks ago?

Well, Premier Gladys Berejiklian is quietly giving the Nationals exactly what they wanted. And it’s worse than we imagined. Right now, there is a bill before the NSW upper house that would prevent any more core koala habitat on private land being protected from logging and land clearing.

This bill is a death warrant for all koalas that don’t live in protected forests. [7]

What  privileged lives we lead in ‘retirement’ [of course artists never retire]. We write letters give money, go on demos, but could do so much more. The trouble is each day here is so wonderful, I am greedy for living.

As the sun lingers, Cockatoos gathered around the house.
Cockies are flying west to the broad aerial estuary settling the sun down. 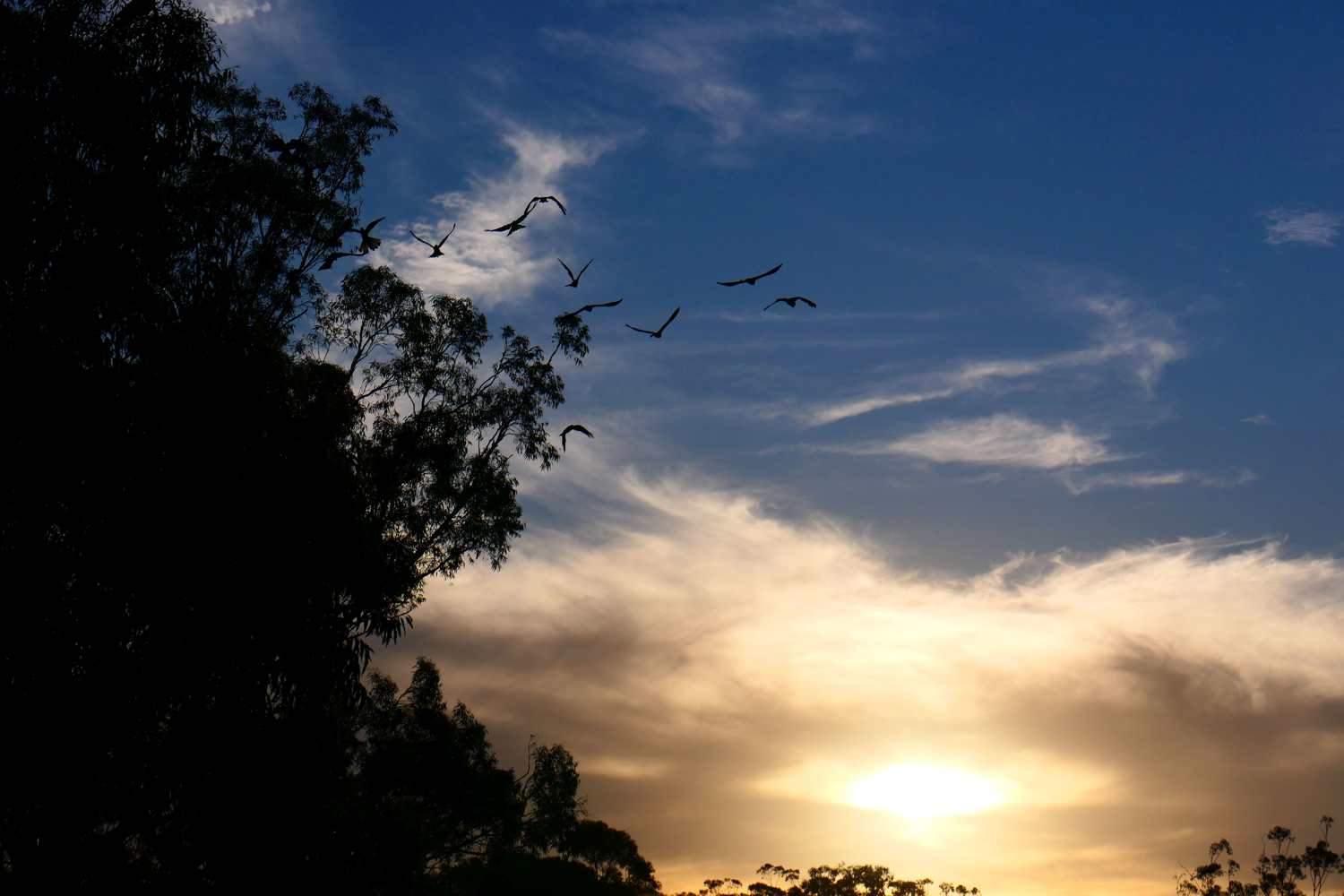 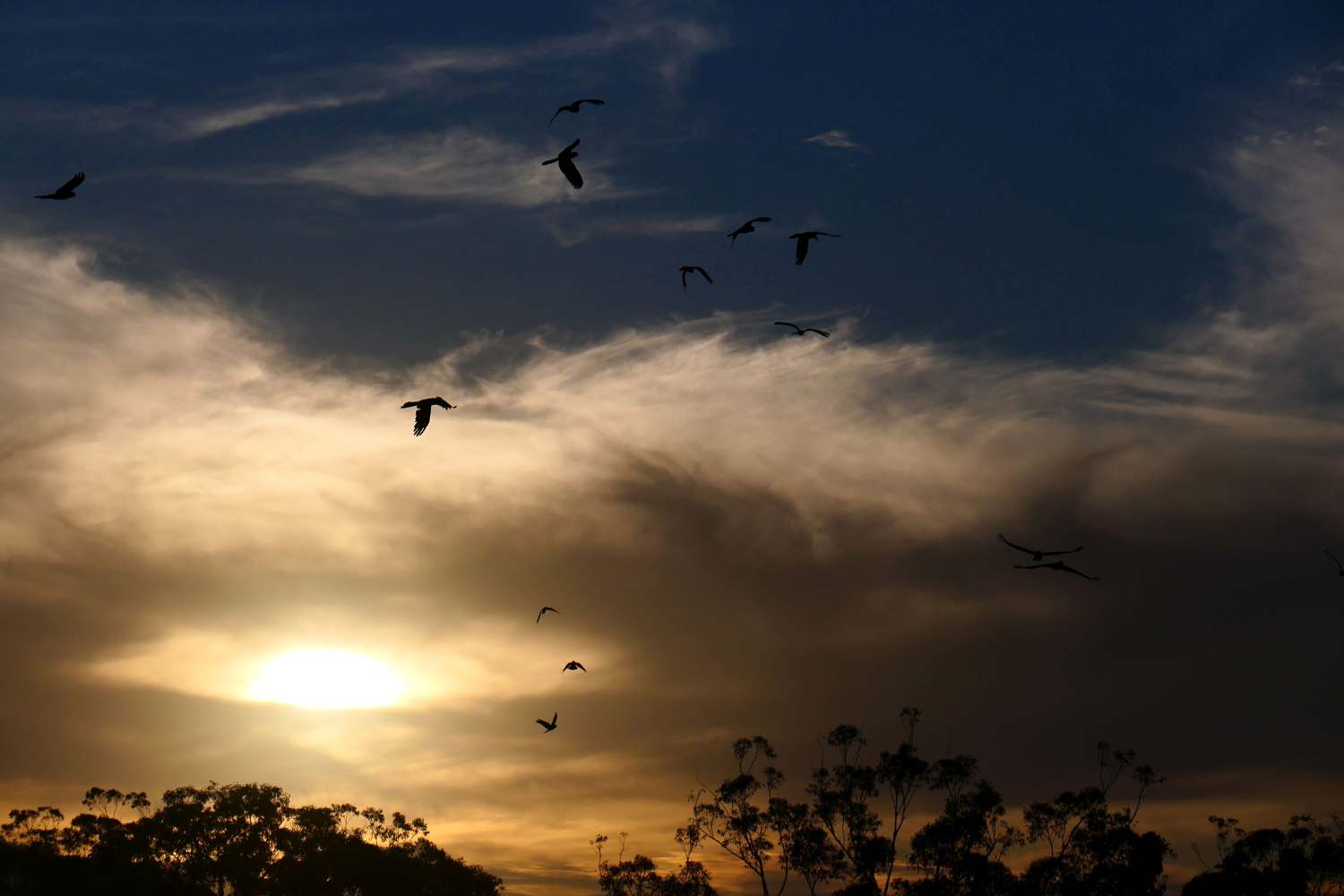 Imagine a murmuration of cockatoos, an excess of feathers, likely
accidents, too rough and ready for Red Arrows stunts requiring practice
(I grew up with Arrows, the Roulettes sound like a Motown girl group).

I have just rejected an offer from The Northern Rivers Community Gallery to exhibit works, including this journal. They offered a space the size of a lock-up garage.

‘As discussed, the space is clearly inadequate. Crisis, which crisis? is a display in three zones (all based on my daily journal):
1.Video;
2. Audio, with photographs associated with each musical day on the wall; and
3. A wall of photographs – or a projection of photographs from each day of the journal.’

[3] William Lane, The workingman’s Paradise, a novel published in 1892 under a pseudonym.

[6] Fiona Stafford, ‘The Meaning of Trees’ episode 1, BBC Radio 3 – The Essay, Dec 2012. Her book follows the radio essays but adds seven more trees to the ten. Each tree has a chapter each. Fiona Stafford, The Long, Long Life of Trees, Yale UP, 2016. 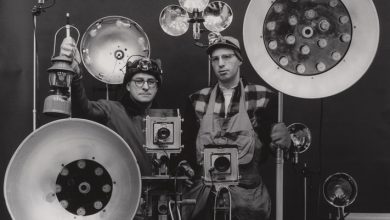 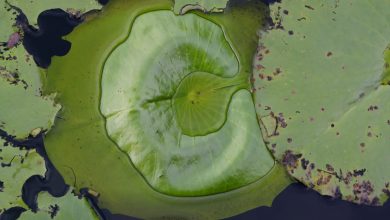 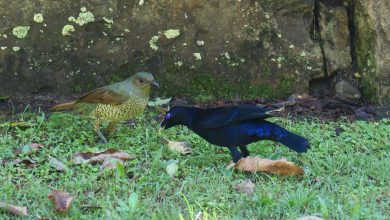