Virus 2020 started in January, long before I knew it was going to become an ongoing project. From early March documenting the progress of the pandemic and my experiences became a daily activity. I explore both personal and social/economic ramifications, from a regional and global perspective. And (as usual) celebrate the natural environment that surrounds me. In this time of lockdown, it’s important to appreciate what you have and think about what the future might be.

Everything changed in 2020. We know the world will tally more deaths, that economies will probably crash off the rails. We also know that the rate we were consuming the planet’s resources was unsustainable. The environment will be better off in the short term. Many hope that this is a pause enabling us to re-evaluate just where our liberal democracies, late capitalism’s web of multinational corporations, mass communication and global finance, and capital’s blanket appropriations, are taking the world. Artists and writers can help re-calibrate values, knowledge, interests and attitudes.

At present I am only able to upload  selections of the journal.

Curlews are the antithesis of kitsch and have a lot more going for them in terms of scarcity and repaying attention . . .

An unforeseen happening: a ball that bounces back . . .

Listen. This whole continent is filled with the power of the Dreaming . . .

Once a population is uprooted, so too are their languages and histories rendered irrelevant.

I wander through the emptied city, landmarks changing rapidly.

The fluffy chicks claw their way to the surface, the adult male immediately kicks leaf litter at his offspring and sends the  Brush Turkey toddlers packing.

A Sea Eagle is in possession of a small fish, almost colliding with a Brahminy Kite carrying a mouthful of nesting material.

I saw one of my favourite paintings again hanging on the kitchen wall. James Dixon’s ‘Tory Island’.

There is a welcome concert. Outside, an elderly man sells balloons . . .

I just think of the angelic wings I captured.

We have become caretakers of this whole ball of planet.

I have seen the Regent Honeyeater, I hope you have too.

What business have I in the woods, if I am thinking of something out of the woods? Thoreau

We are heading south to hear music on Mt Yarriabini.

The Führer, I may add, has a passion for cut flowers in his home, as well as for music.

Microscopic organisms such as bacteria, fungi and viruses – and dirt are crucial for our well-being.

We talk about Adam Nicolson, dogs on the beaches and other current worries . . .

There are a billion fewer seabirds now than when I was born.

The Solitary Islands are a stencilled vision . . .

I am hoping this pandemic will encourage simpler tastes, less consumerism, more awareness of place and the environment.

Senior druid King Arthur Pendragon said it was “not very pagan” to watch a “false sunrise” on a screen.

A Bloodwood song sung by Uncle Clarence Skinner begins, ‘The bloodwood flowers rain down’. (Image is of a Bluegum)

‘The crucial and perhaps only and all encompassing task is to understand place.’

There still are some wonderful peoples who learn music as easily as one learns to breathe. Debussy

‘I am strongly in favour of using poisoned gas against uncivilized tribes . . .’ Churchill

Edward Colston came down easily with ropes, a protester knelt on his neck.

Visiting Gondwana rainforest, the oldest in the world, just west of where we live. The temperature was just 5 degrees.

‘Deaths in our backyard’: 432 Indigenous Australians have died in custody since 1991.

John Dewey expressed the hope that children would be educated to enhance their individual qualities in ways that enrich the community.

Doomscolling for obsessively reading the news . . .

The International Day for Biological Diversity

I was attacked during the January Nambucca Council meeting by a conservative, pro-logging councilor for being emotional.

When Pepys, the great diarist, fears that his life is in danger during the plague (and later the Great Fire of 1666), ‘he defends himself with sexual activity’.

‘Warraaday’ is just over a year old, Gumbaynggirr for Wood Duck, the totem of late Uncle Tom Kelly a gentle man.

He asks us to leave, says the forest is closed, a fantail is singing. Bumagin tells him to leave. This is Gumbaynggirr land.

What if art had no works of art, no artists as makers, rather artists as facilitators, tour guides, educators? A sustainable art!

Not everyone over 65 wants to just stop.

Looking for the first day of winter.

The longest happiness study ever conducted discovered that, ‘experiencing loneliness is toxic.’

Solitude: Already, he was dreaming of a refined solitude, a comfortable desert, a motionless ark.

I play a game – what painting would I like to stand in front of, if teleported?

Intensive care saves lives — but it comes at a ‘huge cost’ to our bodies.

How the dawn chorus reconnects me to life, and hope.

Lockdown restrictions are being eased in NSW today.

Back to normal? Normal was never normal . . .

It is no accident that the portrait was the focal point of early photography.

What you need to know about getting a hair transplant in Turkey.

Taking time to notice nature . . . will improve your well-being.

EPA approves logging without looking at koala impacts after bushfires.

The World Health Organization has cast doubt on the usefulness of antibody tests for Covid-19.

How to make sure your new vegetable seedlings survive and thrive.

For many in Australia, the bushfire catastrophe now seems a distant memory as the coronavirus pandemic takes this country deeper into the unknown

We are witnessing a critical time in history. You should keep a diary.

Pope urges world not to yield to fear.

Australia recorded 6,000 confirmed cases of Covid-19 on Wednesday, and 50 deaths from the virus.

The UN Food and Agricultural Organisation says there could be global food shortages within weeks.

Scott Morrison has offered a prayer for the national cabinet to stay “strong and united” as it responds to Covid-19.

All Australians have been told to stay at home except for essential outings, including work, grocery shopping, and medical appointments and supplies.

Australian prime minister Scott Morrison has told the country that hoarding is ‘unAustralian’.

COVID-19 and the Cadigal peoples of Sydney

COVID-19, evolution and looking forward. The tale of virus evolution

COVID-19, Isolation with Eos. The perfect opportunity to get to know Eos.
[For more information on my Eos project see here]

‘In a couple of days it’s to be down close to zero.’ Trump 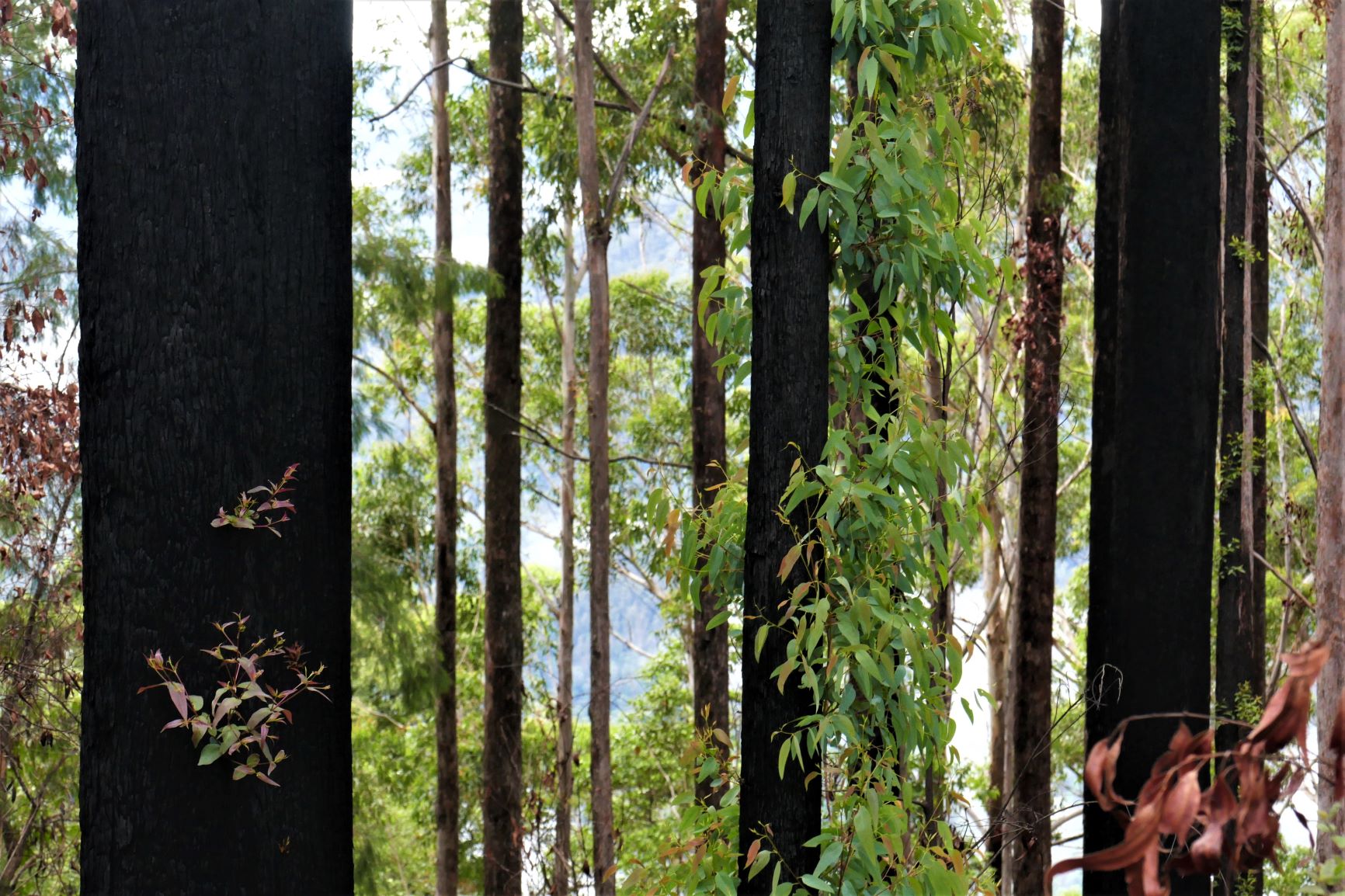 The crisis for our planet is ongoing. Back up in the ancient rainforest behind Bellingen, on a survey for Rufous Scrub-birds after the fires in November. They are already a threatened species. We heard three in our four transects, a successful day. New growth shooting, but many trees dead. 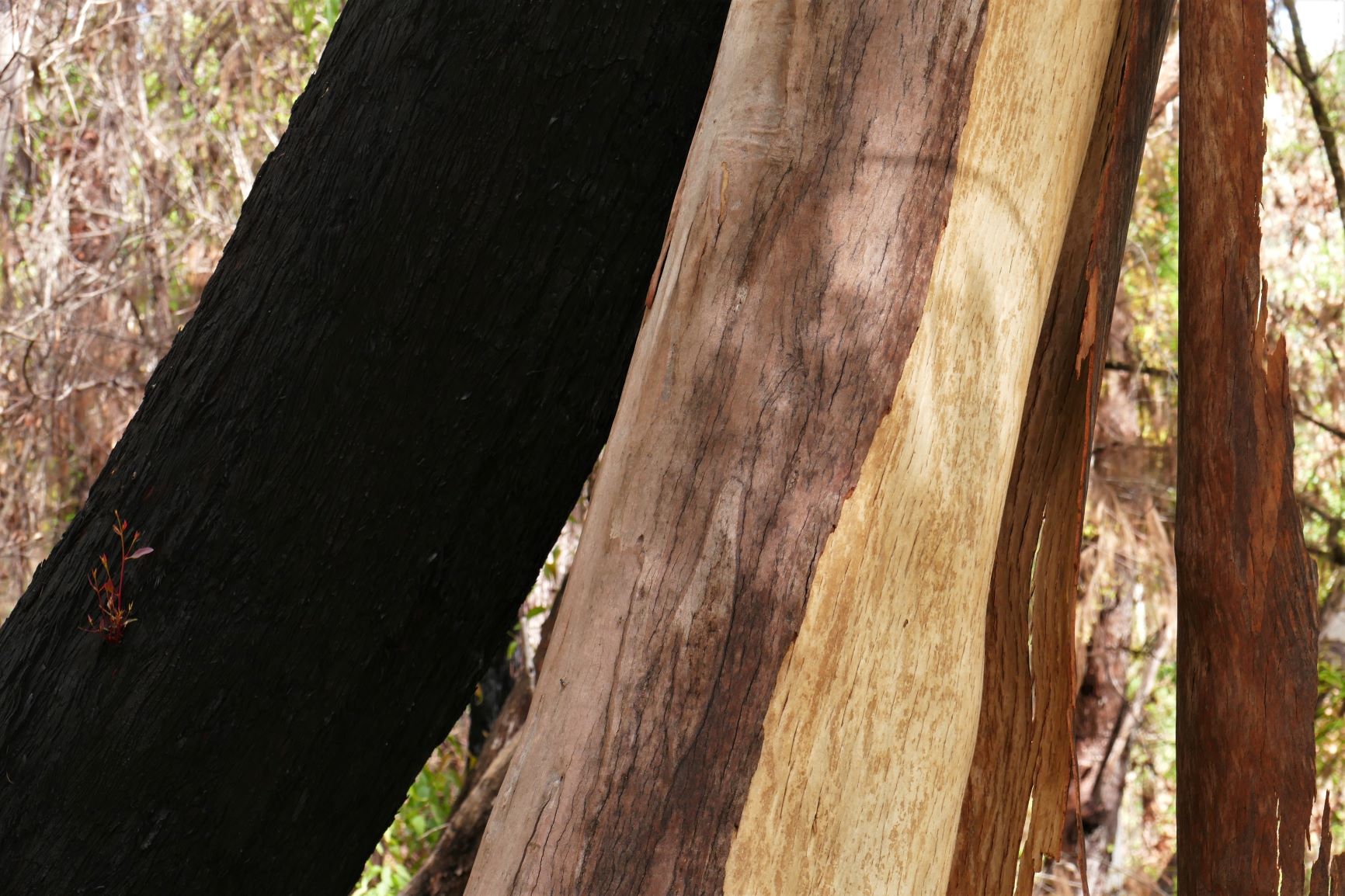 In November, local ecologist Mark Graham was on the ABC talking about this area:
We are seeing fire going into these areas where fire is simply not meant to go . . . they have been permanently wet for millions and millions of years . . . They are the oldest forests remaining on the planet.’ He and friends were fighting fire without water, ‘hard manual work raking leaf litter back to mineral soil so the fire won’t carry.
(Fires and wildlife, ABC, Saturday Extra, 16 Nov, 2019). 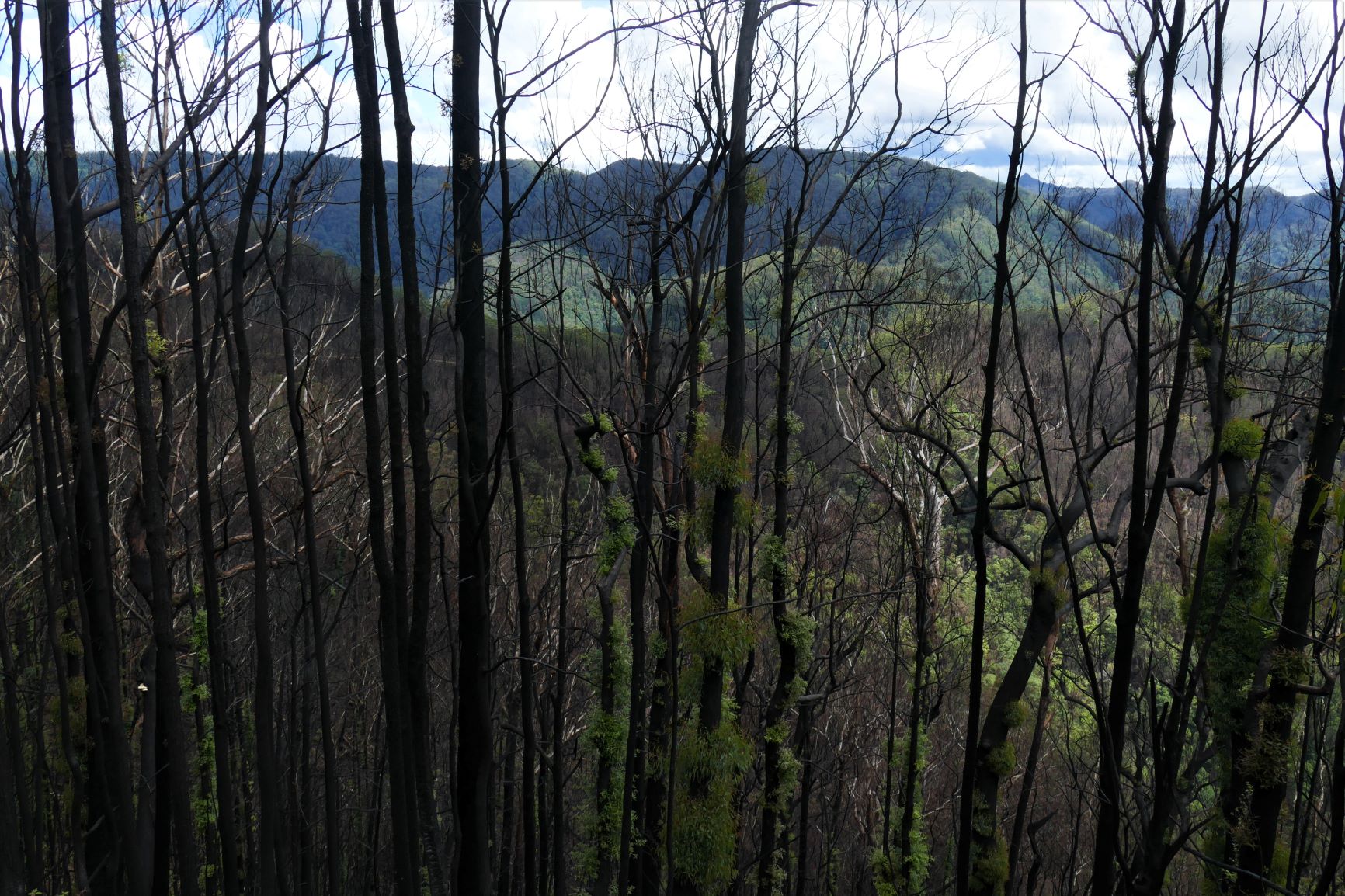 When Will Australia’s Prime Minister Accept the Reality of the Climate Crisis?  – Scott Morrison called this bushfire season, and the changing climate, “the new normal” but has given no indication that he will change his policy stance and transition away from fossil fuels. New Yorker, Jan 15, 2020.

RIP- Dr. Li Wenliang, who tried to ring early alarms that a cluster of infections could spin out of control, dies after contracting the virus. He was reprimanded by authorities in early January and he was forced to sign a statement denouncing his warning as an unfounded and illegal rumour. 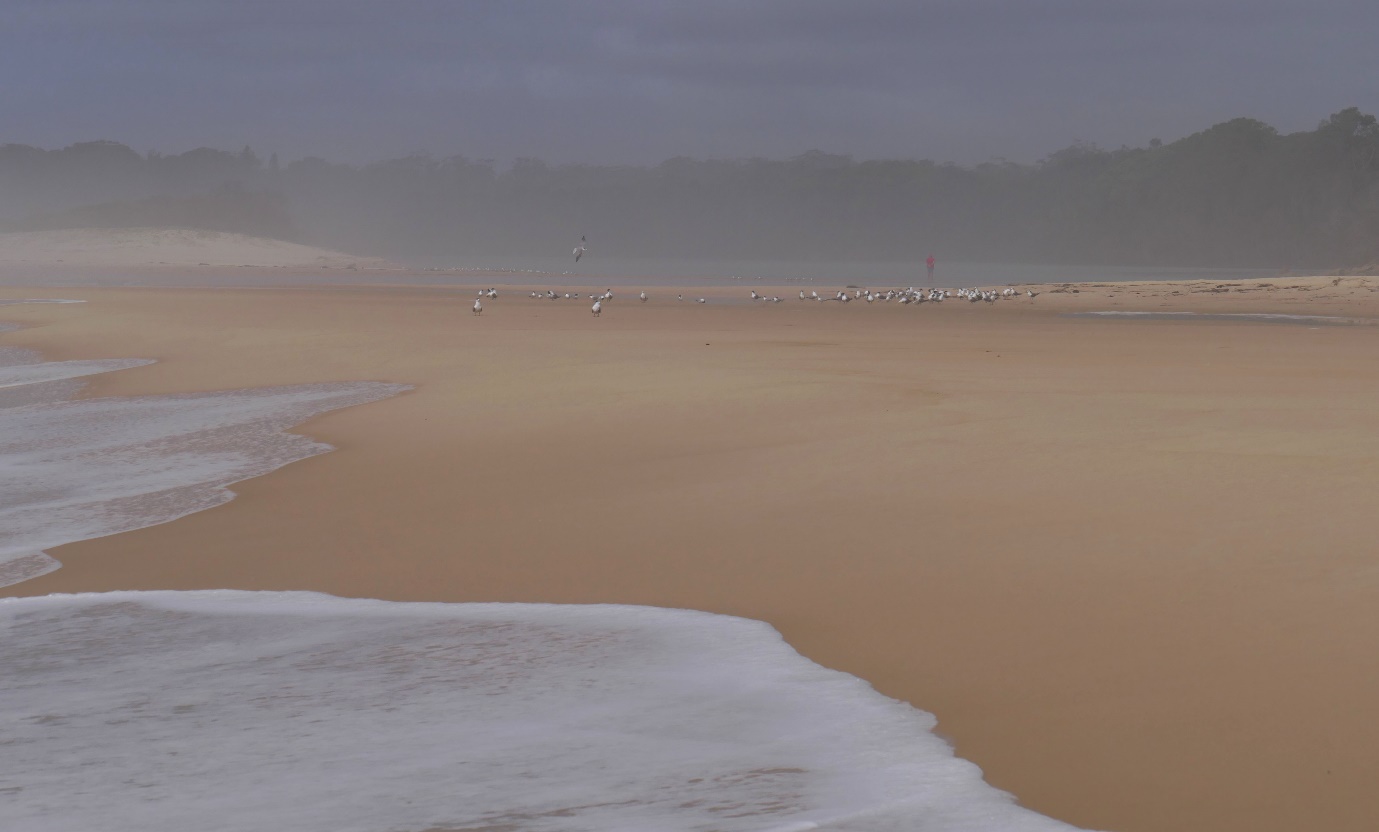 There is a man in red walking on water,
but there are no miracles.
The dark wall of trees, as if all
that has happened, all those miracles,
massacres, disasters have brought us
to the twilight of history.

We should have been much better prepared and quicker to act. We all knew a pandemic was coming – sometime (and an asteroid eventually).

‘We have it very well under control.’ Trump
WHO declares a global health emergency amid thousands of new cases in China. British Foreign Policy Group

Walking along the river’s mouth I was saying to Wyn, I hope you have ordered some dolphins for us. Two pods, leisurely passing north with an utter easiness.  I wasn’t anticipating surfing, though it is quite common.

Mouth of the Nambucca River

Surfing at Arrawarra I got taken off by a wave, turned round
to come up from the bottom and this dolphin has just come
out of the wave and gone ‘BANG’ – hit the front of the surfboard.
Yeah, I fell off and well I didn’t know what it was
when it came, but you know, it was as if it was saying
‘No, I can do this better than you’, which they can.
Russ Glover
From ‘Not so Solitary‘, my shaping of Nicola Johnstone’s oral histories of the Solitary Islands Marine Park.

Hope in small doses is a composite of what happiness might be, an ephemeral retrospective state of consciousness. Disappointment is its necessary corollary. Love fits in here somewhere, whereas intelligence is overrated in any species.

‘We have it totally under control. It’s one person coming in from China.’ President Trump

Public Health England announced it was moving the risk level to the British public from  ‘very low’ to ‘low’. British Foreign Policy Group

For it is important that awake people be awake,
or a breaking line may discourage them back to sleep.
William Stafford, from ‘A Ritual To Read To Each Other’

When we visit a beach we have not been to before, there is no poem telling us how to see and feel about this particular beach, and if there is, we would probably have not read it, nor are we likely to think it would be important to do so. We draw instead on cultural knowledge of surfing, about sharks, about rips and tides, and about ‘swimming between the flags’. Bronwyn Davies, (In)scribing Body/landscape Relations, Rowman & Littlefield, 2000, p185.

When we visit a beach, we are walking on other beaches we have walked on, re-engaging embodied skills and muscle memory, adjusting our gait in the sand. In the recesses are personal experiences and childhood memories, not just knowledge. Experience and engagement are ways to feel where you are, alert and alive. In Australia the beach is iconic, with cultural overlays, paintings, photographs, films. The beach is an Australian way of life (though 19th C  prudes banned swimming in daylight hours).