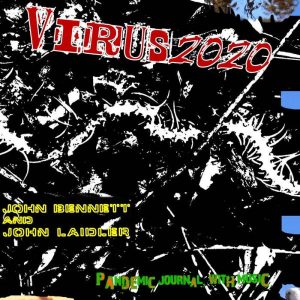 No, not quite a musical, rather a CD of journal extracts worked into music by John Laidler (eclectic genre pieces, from ambient to afrobeat via protest punk).

Two videos from the album:

The first music I recall was in a warm bathroom wrapped in large soft white towels while my mother sang the tunes from all the musicals. I don’t like musicals but have a fondness for the songs she used to sing, ‘Maria’ and songs from ‘South Pacific’.

A wonderfully eccentric and revolutionary composer was Erik Satie who took music in one direction as far as he could, and a few of his magical tunes have been close to ruined by the advertising industry. John Laidler and myself have made a short doco on this most influential composer (see Video)

Music surrounds us, in the trees, on the radio, in TV ad jingles, even in noise. John Cage wrote, “There is no such thing as an empty space or an empty time. There is always something to see, something to hear. In fact, try as we may to make a silence, we cannot.” He took music as far as it could go in another direction.

Richard Teitelbaum’s ‘Threshold Music’ blends music performance with the environment, so that the work is camouflaged and the ‘audience’ only realises music has been playing after it stops (or often not at all).

The percentage of music that is actually listened to must be minute. Paying attention is something I struggle with, limited patience being of no help, but attention is of increasing importance in a world of distraction.

Fancy some funky existentialism? Try Without Milk, the Icebenders. I have no idea why John Laidler’s ‘s music points my lyrics towards Paris again. Dec 2018

Nine Found Poems in the Shape of a Piano 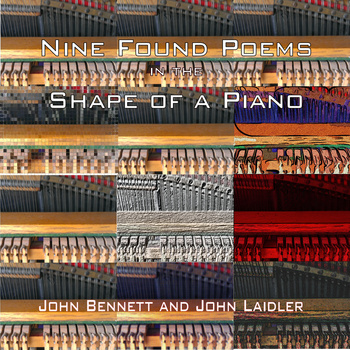 This CD tests an omnivorous set of pianists and composers for the piano, from fakes to mystics with biographies, extraordinary environments, fables and reconstituted sounds.

“Painting long ago discovered perspective… Yet music has not succeeded in going beyond two dimensions.” Count Giacinto Scelsi

Here you will find sad stories of Ravel’s brain, the concentration camp Terezin, two mad pianists, a very eccentric pianist, Glenn Gould, and a very eccentric composer for the piano, Eric Satie. The musical mashups account for the physicality of this percussive instrument, as well as its magical grace and mystery, its poetry and its prose.

John Laidler and I have been putting music and poetry together (lyrics below).

Five Visions of Paris / Their Heads are too small – a funky track with the eyeball on history in Paris, brought to you by the Icebenders

Nine found poems in the shape of a piano

We have produced one CD ‘nine found poems in the shape of a piano’ which investigate piano music through poetry. These pieces began as montages found, written and improvised poems investigating piano players or composers for the piano.

From the CD ‘nine found poems in the shape of a piano’ which investigate piano music through poetry: Piano Man Glenn Gould

In 1964, Glenn Gould renounced piano performances and predicted that concerts would eventually die out, to be replaced by an electronic music culture) Gould is still a celebrity. His Toronto haunts are on a tour – the house he grew up in, the hotel he hid in, the diner he ate in for his one meal of the day alone in the middle of the night.

Painting long ago discovered perspective… Yet music… has not succeeded in going beyond two dimensions.

Piano Man Anon  (see video)
The man has not said a word since police picked him up
wandering the streets of Sheerness, Kent ,in a soaking wet suit and tie
. . . the labels had been removed from every item of clothing
The man’s talent came to light after staff . . . gave him a pen and paper
in the hope he would write his name. Instead the patient,
dubbed ‘The Piano Man’, drew very detailed pictures of a grand piano.
The man shocked staff with a performance of classical music.

Their Heads are too small

The post-modern Rogers and Hammerstein looms out of the grey Marais, a square blue insect singing its guts on its shell. I take the escalator, a plastic tube that tilts up the side of its truth strutting colour co-ordinated air conditioning ducts & electrical conduits enhanced by pigeon shit.

Refreshed by rain, the city spreads seductive veins, glamorous arteries, her glowing skin unable to be touched but available to the gaze. Attention funnels down the gleaming rhythms of the Second Empire, its large shop windows advertising the colour and excitement Impressionists loved. The Pantheon’s cupola broods above Notre Dame, flat ridges of chimney pots break across the city’s steeply pitched roofs of lead, copper, terracotta pierced by bright dormer windows.

Light overexposes Sacré-Coeur’s bulbous confection perched on the butte of Montmartre. Zola visioned the city from its steps, Victor Hugo from Notre Dame, Felix Nadar from a balloon, and Balzac favoured the cemetery of Père Lachaise behind me, where the Communards set their last artillery batteries and fought to the death around his tomb.

The best selling postcard is of the dead in their coffins an expiation or celebration of the slaughter of 20 or 40 thousand. Thomas Cook ran tours of the ruins. Cities that once existed for their walls have long since overrun them and are spreading wildly into fields and trees. I can’t see past the office blocks of La Defense to nature where the sun is setting.

The eye pulses, the visual cortex throws its weight around inside the tight confines of a knitted skull, squeezing hippocampus and amygdala. Drummers return with the late sun, African synaesthesia busks a view of the old Opera, the Eiffel Tower and so the beat goes on. People cling to their shadows, their heads much too small.

Nine found poems in the shape of a piano

– an extract from Schumann’s Wolf-Lieder stretched
with samples from Ross Bolleter’s sleeve notes and recording.

strings broken from the pounding as he tried to hear.

with air, using hands to improvise for hours, hearing through his fingers,

and the bubbles popping through the airlock over the lilly pilly wine.

A piano is said to be ruined (rather than neglected or devastated) when it has been abandoned to all weathers,
say on a sheep station or tennis court, with the result that few or none of its notes sound like that of an even-tempered uptight piano. RB

Soundscape of the art gallery of New South Wales

to an art gallery – the urinal’s automatic flush, the sound of

from an installation on the first floor. He sits down

at his site-specific art listening for the harmonics

and starts up an incoming tide of warm arpeggios rippling

over the woman who lies slumped against a tree, tired out,

her child explores her lap, her husband, back to us, puts a billy on to boil.

Birds call account through their solitude ‘On the Wallaby Track’. . . .

A note on Serial Music

Schoenberg thought everyone would be whistling his tunes, he would still be waiting and Hugh MacDiarmid too. After the serial onslaught of the fifties and sixties, music using classical instrumentation has become more user friendly and some has even returned to melody and harmony. A recent favourite of mine is Elena Kats-Chernin’s, Victor’s Heart. This version from our art gallery has Kats-Chernin on piano with Renate Turrini (impassioned but not the best sound)