“The concept of global warming was created by and for the Chinese in order to make U.S. manufacturing non-competitive.” Trump, Twitter, Nov. 6, 2012.

Another first day of summer, the first grating of cicadas,
the first Orchard Butterfly dithering in the Black Bamboo,
lightning slicing the humid sky above the sea’s skirts.

The last four years have been the warmest on record.

“I would build a great wall, and nobody builds walls better than me. Believe me . . . I’ll build a great, great wall on our southern border and I will have Mexico pay for that wall. Mark my words.” Trump, Campaign Launch, 2015.

The wall opens up like a tin can unravelling across the globe,
a compelling sight Trump would enjoy. You should be able see it
from outer space, the stones would balance higher than Trump Tower.

The eye is mesmerised, compelled to track the wall snaking
the contours of this rugged range. I count watchtowers like teeth,
seven in view and innumerable bouquets of wild cherry in blossom.

Emperor Qin Shi Huangdi unified China in 221BC and ordered existing walls to be connected and the Great Wall extended. 20% of the country’s population were involved in the construction, a massive army of soldiers, convicts and commoners. Casualties were high due to the heavy work, deadlines and difficult conditions, surveyors, soldiers, labourers lie buried in foundations, mourning was brief. Eventually, after many dynasties, the wall worked from earth and stone, the wall stretched over 3,000 miles from the port of Shanhaiguan west to the dunes of Gansu. The human art of terraforming was beginning.

His Qin dynasty ended the Warring States era of turmoil and intellectual ferment bubbling with ‘the Hundred Schools of Thought’, including Confucianism, Daoism (large chunks of the Daodejing were circulating), Legalism and Mohism. Huangdi had a singular purpose so it’s not surprising that he burnt books and tossed scholars into a ravine.  Every empire falls.

To breathe in
first breathe out,
to weaken something
first make it strong,
to overthrow something
build it up,
to take
start by giving.

This is a subtle vision,
water giving way dissolves
the hardest stone.
Daodejing 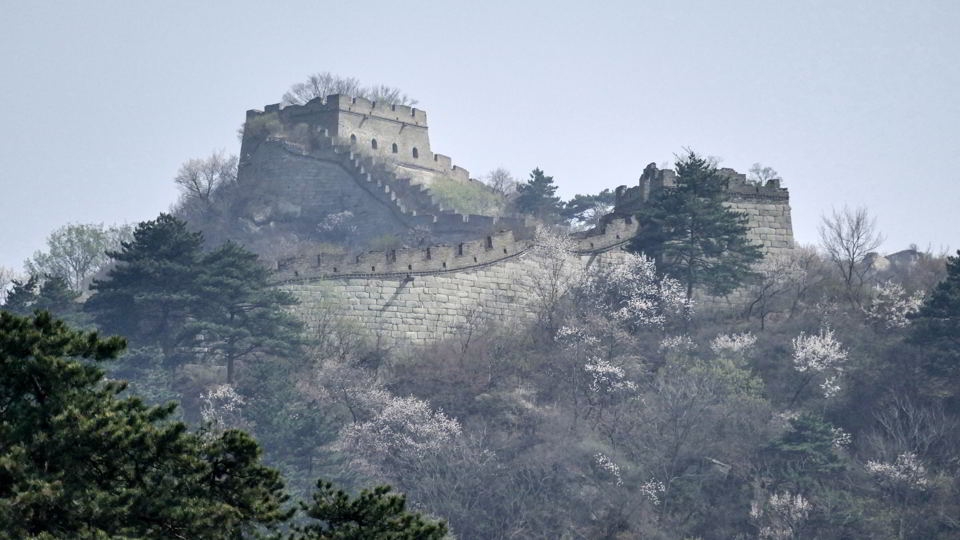 The long and winding view is disappearing in roaming cloud, a sublime
competition between mighty mountains and a wall. A 200 metre slogan
‘Loyalty to Chairman Mao’ is being obliterated by falling cloud.

‘Listen, you motherfuckers, we’re going to tax you 25 percent!’ Trump on the Chinese, Las Vegas speech, 2011.