We camped inside history as Australia drifts north. This region of shallow lakes passed over a vent in the earth’s mantle, magma tore apart the crust as it raged to the surface and the pyroclastic meltdown roared across the land, when the ancestors breathed fire.
A series of eruptions sculpted a large stone cone a thousand metres high and fifty kilometres wide. Erosion began to eat it, 13 million years ago and has now swallowed 90% leaving the oldest basalt domes, plugs, spires and dykes, high in silica and resistant to weathering, forming a chain from the Glasshouse Mountains to Mount Macedon in the south.

We camped in Kamilaroi country. Warrumbungles means ‘crooked mountains’ in the language. This ritual space was used by three nations, the Kamilaroi, Wiradjuri and Weilwan for at least 20,000 years. Burial sites, axe grinding grooves, rock engravings, stone flake tools and a number of cave shelters energise the park, stolen identities, ghosts, endangered animals.
We camped among Eastern Grey Kangaroos looking rougher than the ones loitering in our garden and beneath an Apostlebird mud-nest as round as if fashioned on a potter’s wheel, yet made by all the members of the group who also help feed the nestlings. They are a commune; more than one female may lay in the same nest. Humans camp apart; we complain to one about their loud music and are cursed. The following night our neighbour used a chainsaw to cut his firewood. 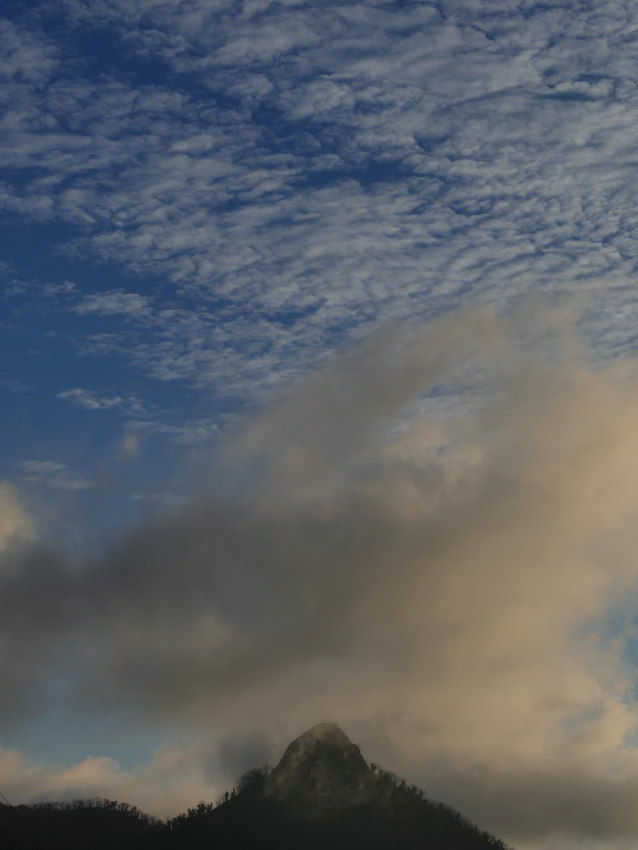 We camped beneath a Greater Glider that flew from tree to tree, a most elegant trapeze artist with a fluffy tail, and fell asleep to the white noise of wind in the trees that was distant frogs. A transcript of night noise, the close distance of determined crickets, passionate frogs, hunting boobooks, the thump of kangaroos near my head in the middle of the glow of the Milky Way, was an inspiration for dreams of an endemic bestiary surviving European ways of doing things. Nature can be the best neighbour.
We camped both sides of Belougery Split Rock, waking one morning on the Western side to the whistling of Noisy Miners and the next, beside Wambelong Creek, to the excited chatter of Splendid fairy Wrens and tail-end of the Pobblebonk (or Banjo) Frog chorus ricocheting all night. The burrowing frog emerges after rain and the park is green. 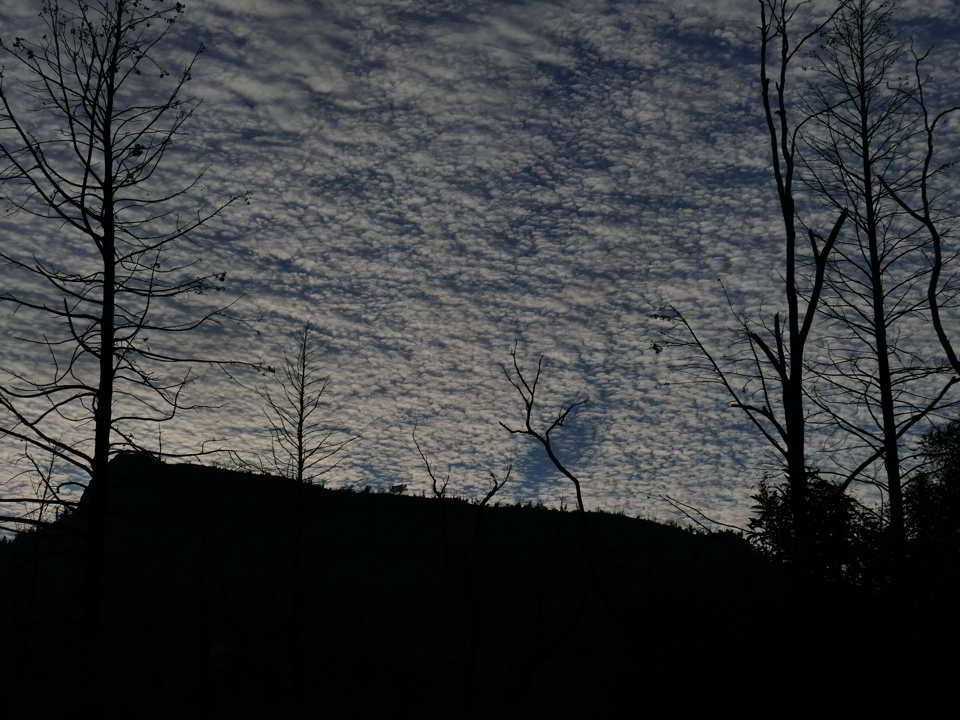 The morning barely waits for me, a breeze under the flysheet and I’m up, place my camera on a post and use the self-timer. Some five hundred kilometres west of the Pacific, Helios sleeps in for another ten minutes. I wait patiently, a pale sky inside the spectacular silhouette of the Grand Tops, white flecks of cockatoo against a spiny ridge. The fleshy ridges bristle with dead trees. 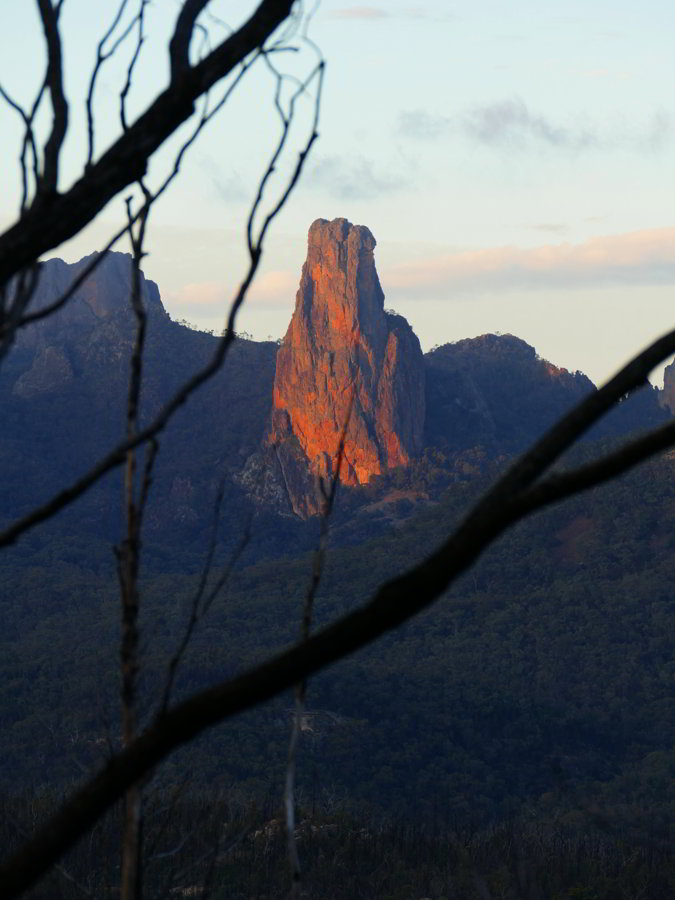 Light energises the landscape, exposing its wounds, nuanced faults, caves, crannies, pinnacles. The ragged fiction is well over ten million years old (since the violence ended). My photographs are framed by carbon arms, the scent of burning has died away.

Saturday Jan 12, 2013 – fire starts at Wambelong Campground around 4pm in temperatures of up to 47 degrees. The coroner could not determine the cause of the massive bushfire. The fire was out of control from 1.00 pm on the Sunday and it took weeks for to burn out. It devastated 54,000ha, destroyed over 50 homes, livestock and native fauna. The largest and most intense fire on record here burnt almost 90 per cent of the park. 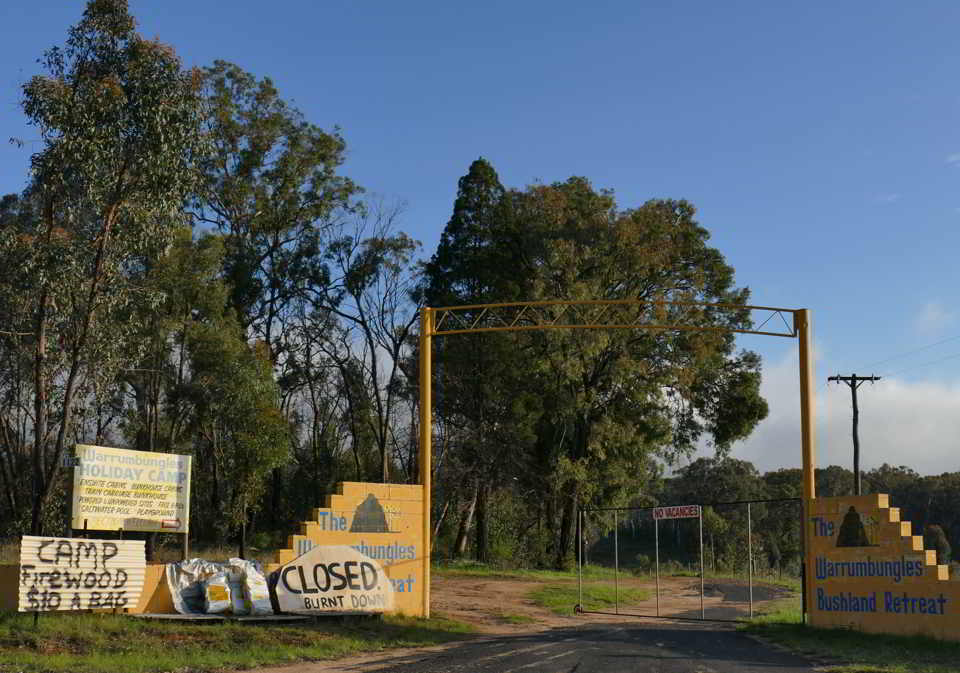 Bushfires are a natural regenerator for the Australian bush, and many native plants need fire to germinate or flower as well as their habitat. But if too intense, bushfires destroy everything. The dominant tree here, the Black Pine, is easily killed by fire.

We follow Mopra Creek scattering clouds of white Caper butterflies on migration, the ones beating themselves to death against our windscreen on our way here. 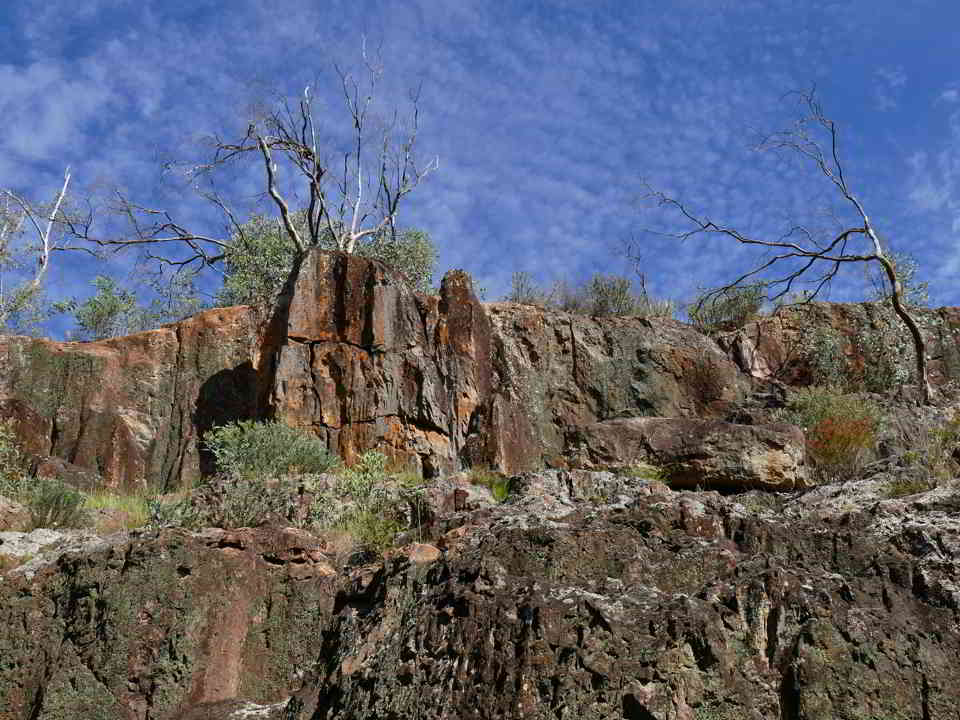 A quartz band gleams beneath dark dolerite with a slip of dark mudstone, a broken daisy chain lies on the bank. 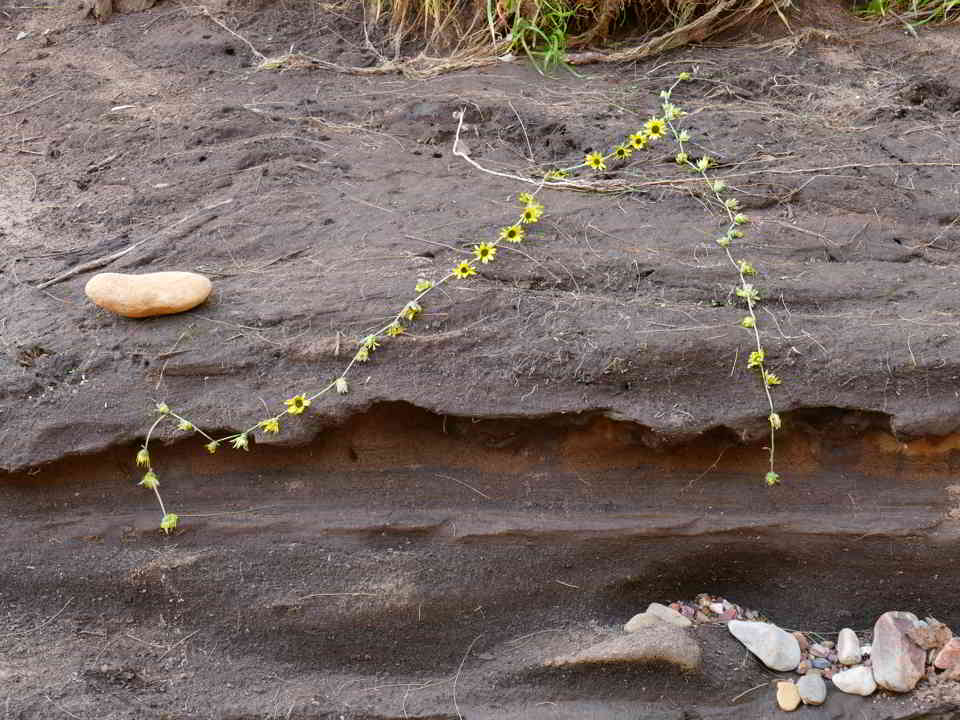 We fish out a pair of colourful kid’s sunglasses, find children playing dam-nation building up river. I hold them up. ‘Yes, yes!’ A boy runs at me. They are his little sister’s. Their energy is my envy.