These boring high end shopping centres, all the names
with three of four staff standing around chatting or looking bored
below Versace a food court and duck and rice and a soup for 6 dollars. 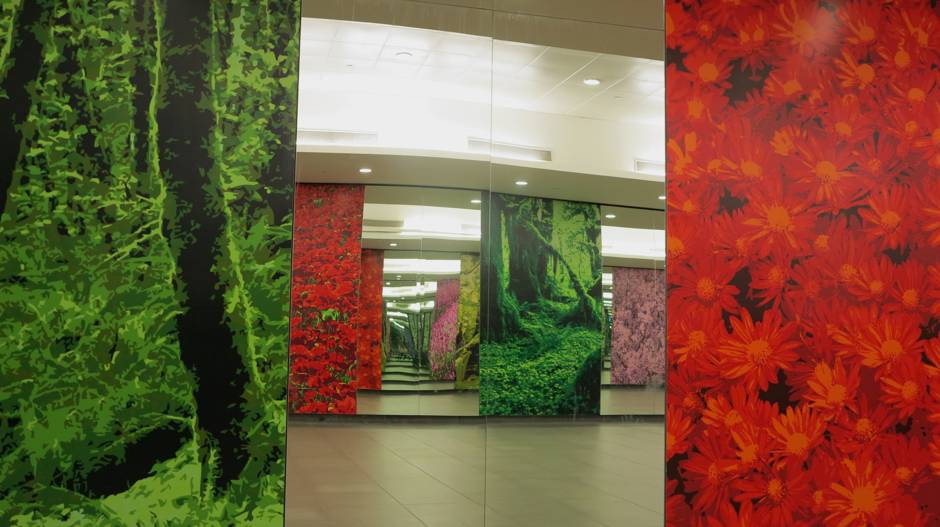 We leave the peeling pop art of the MRT and the long corridor
of floral mirrors and emerge beneath boring tropical skies, amorphous
clouds, sauna hot we emerge onto a 100 hectare garden, reclaimed land?

Among vast Tai Rocks, Tang fortunes, now machine hurt I imagine
livingrock, [the argument rocks have ethics
the soul of earth, chthonic with water and air as if the first natural philosophers
knew matter is all and that the casino sailing overhead, is a pretence of scale
of human achievement or, more probably, human ambition.

The cloud forest is disappearing into the past, thermal stratification,
the mist being piped from the ground, photography doomed, the sides
of the mountain drip with plants, pale foliage, washed-out colours,
through the giant glass structure the sea is visible beyond the port
bristling with cranes.

This biome they say is sustainable, I ask the question
The Sante Fe runs its circuit never stopping to pick up the small plastic figures
waiting on the platform, the tribal figures of ancestors
or sales figures and hold the world’s largest indoor waterfall

Looking out for animal life, without a clear definition in my head
of how animals differ from plants, but I am looking for animals I can see,
the kind of thing the pitcher plants with their bulging prisons.

Security are accompanying a football team,perhaps Athletico Madrid
who are in town, large young men, in groups, one lot making monkey noises
as they spiral up, I vaguely wonder if Falcao is there, a brilliant striker,
bird shit on the pipes, but no sign of life, no birds, beetles, butterflies, bees . . .

The Wollemi Pine was discovered in an Australian National Park in 1994, prior to which it was only known from fossils.

The Pitcher Plant’s cup-shaped leaves attract, kill and digest insects and small animals that venture within.

Circling the the Supertrees 16-story vertical gardens collecting rainwater,
generating solar power and act as venting ducts for the park’s conservatories.
we keep to the shade, see the colours of a White-throated Kingfisher in a palm
grow a habitat for a billion dollars and it usually throws a party, no invitation
necessary for animals

The Supertrees are 16-story vertical gardens collecting rainwater,
generating solar power and act as venting ducts for the park’s conservatories.
We keep to the shade, the colours of a White-throated Kingfisher dazzle a palm –
grow a habitat for a billion dollars and it usually throws a party, no invitation
necessary for animals.

The 440-metre boardwalk along the Dragonfly Lake is one of the many secret gems and a fantastic photographic spot.

Sculptural and planted islands show the ecosystem’s fragility and irreversible outcomes in Nature from man’s actions.

We stroll along Dragonfly Lake, an electric gismo shakes the water
a pair of dwarf Sunda woodpeckers are feeding a small round feathered bundle,
a yellow spined lizard scatters laves then pauses to watch us,
a hummingbird, tiny against the giant seed pods of an acacia,
over a quarter of a million plants, is this the future?

And then floating overhead a White-bellied Sea Eagle, ones we see
everyday at home, patrolling the deserted beaches and here
flying into the teeth of the Marina Bay financial district skyline, skyscrapers
more a termite analogy than a beehive of ceaseless ambition and energy.

Back to the city