While waiting for a ferry that never came . . .

This harbour is a body of water with a dark history, so all that you see looking across its skin is a psychedelic mosaic swirling between the piers. Beauty hides toxic stories, polluted water and fish unsafe to eat. 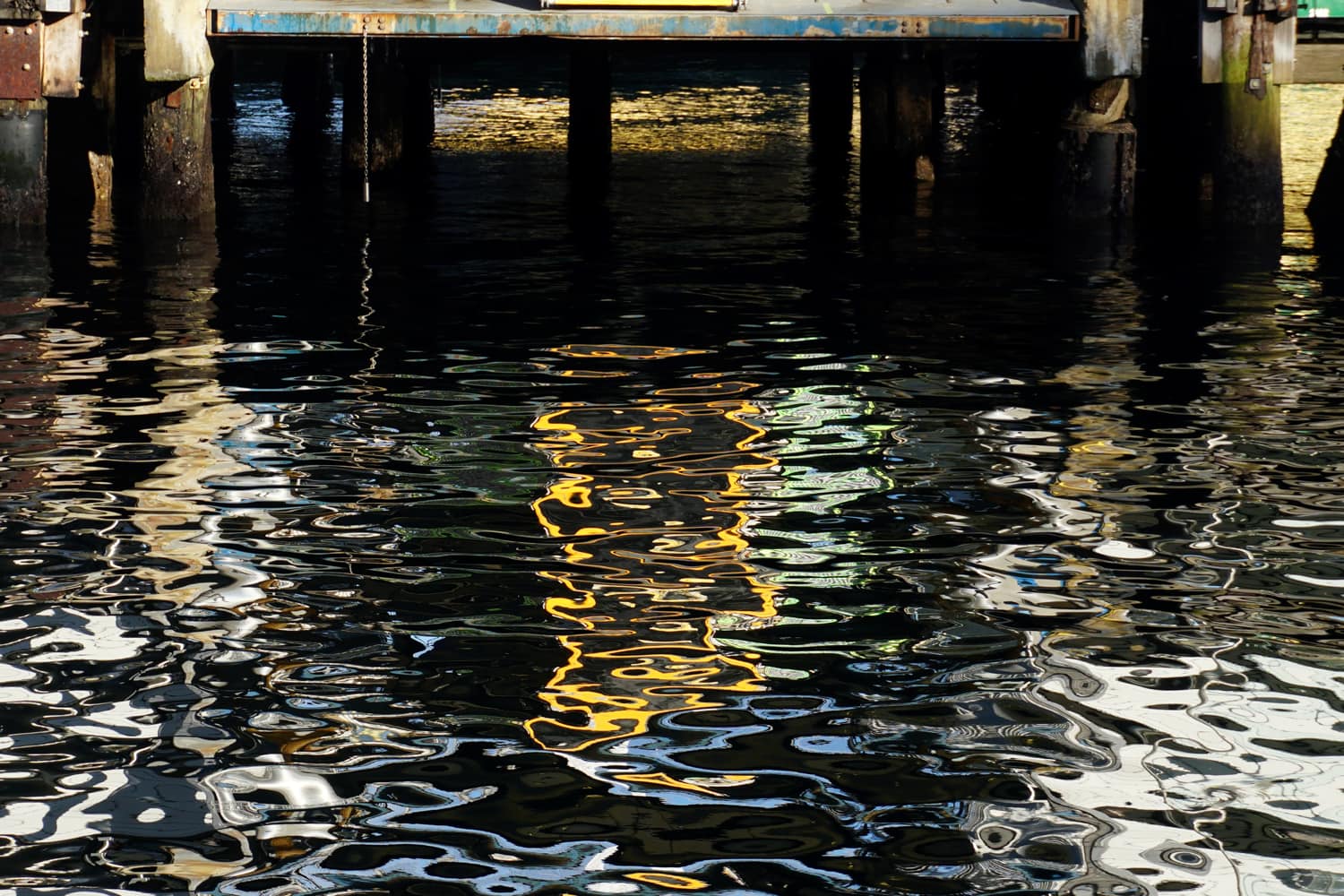 The harbour continues to mark, making brush strokes or welts – art or romance? Argument or surrender? The impressionists revelled in direct mark making. They emphasised separate brush strokes to energise subjects, colour and movement both urban and natural. The ancient practice of fabricating lines, dots, patterns and textures, we call art and craft. 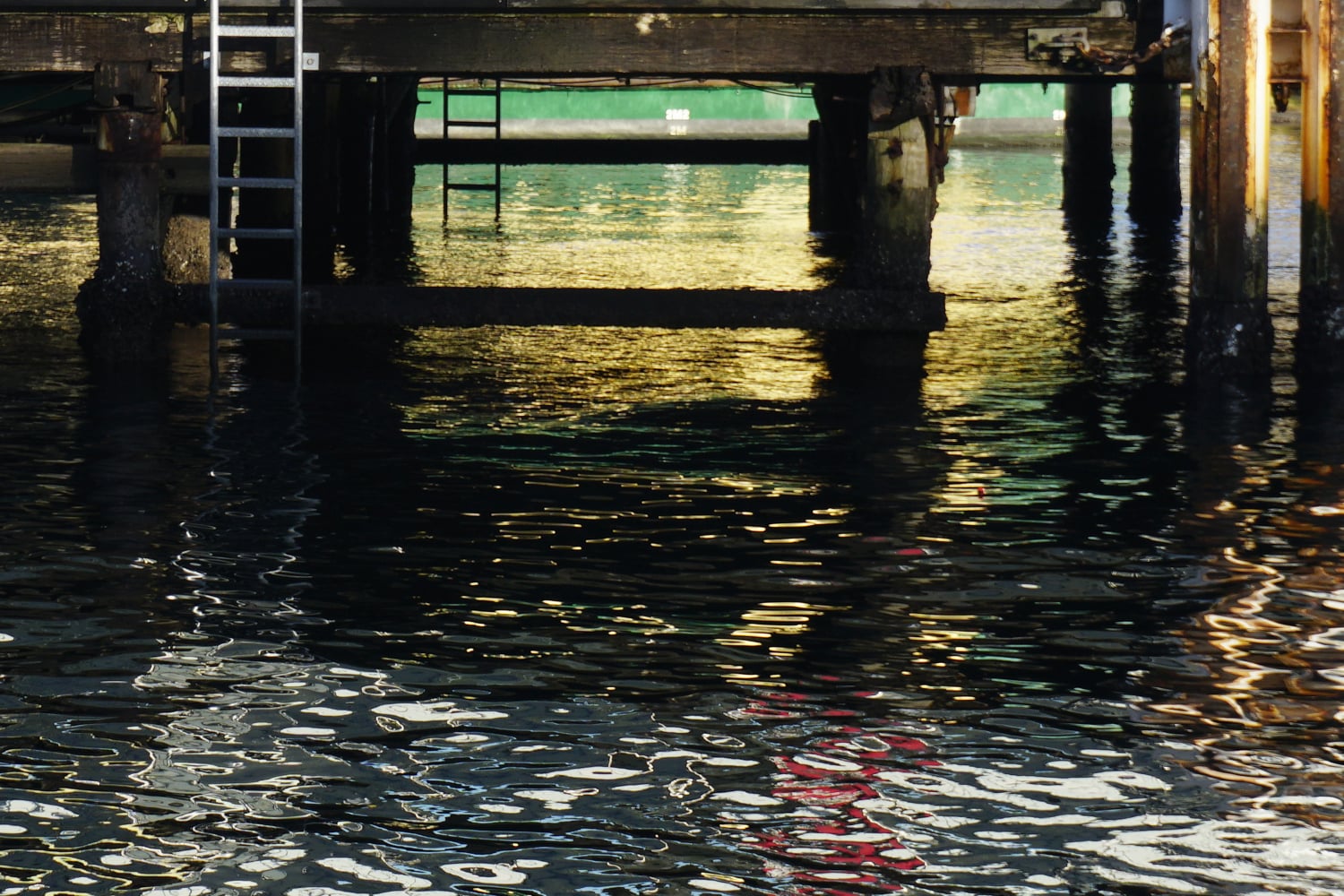 The red marks remind me of the squiggles of our star in ‘Impression, Sunrise’, (Soleil Levant) of 1873. Painted in one ‘sitting’, Monet stood at a window overlooking the harbour at Le Havre. The painting is credited with inspiring the name of the Impressionist movement, a term used by the journalist Louis Leroy.

Monet wanted to capture the infinite variability of light. He began to use impasto, heavy strokes with colours next to each other, not mixing, giving the canvas an animated surface. In an abstract or semi-abstract painting, mark-making is key to the work and derives from an artist’s personal visual vocabulary. 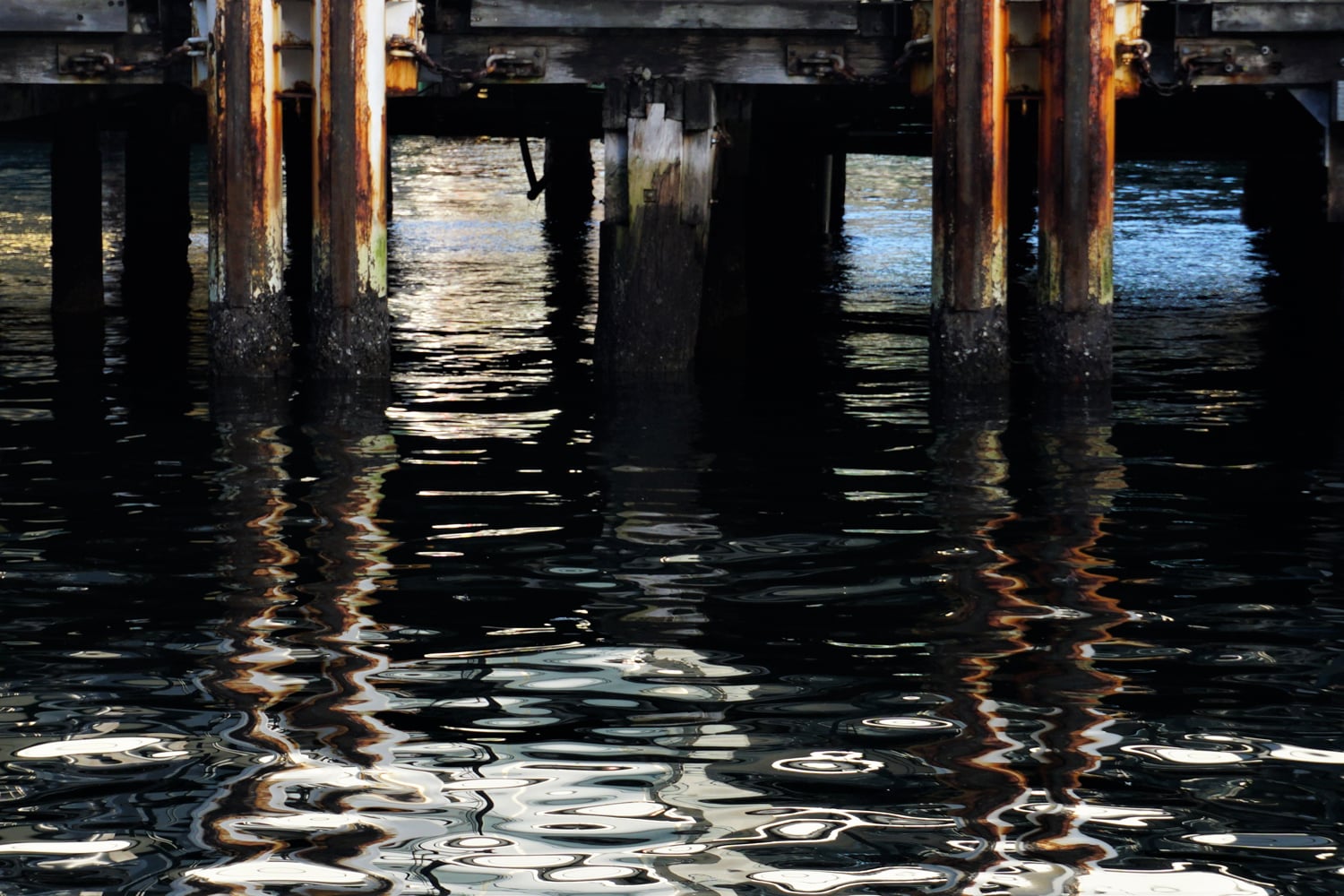 He would apply wet paint onto wet paint and dry, and typically used just nine colours: Lead white, Chrome yellow, Cadmium yellow, Viridian green, Emerald green, French ultramarine, Cobalt blue, Madder red (like alizarin crimson), Vermilion and Ivory black (before 1886). [i] This is wet art, and if you see it for yourself (and not through my camera, the memory card, the screen, the internet, and all of that), it’s a supremely sustainable art form, not using any products from the petrochemical or mining industries. 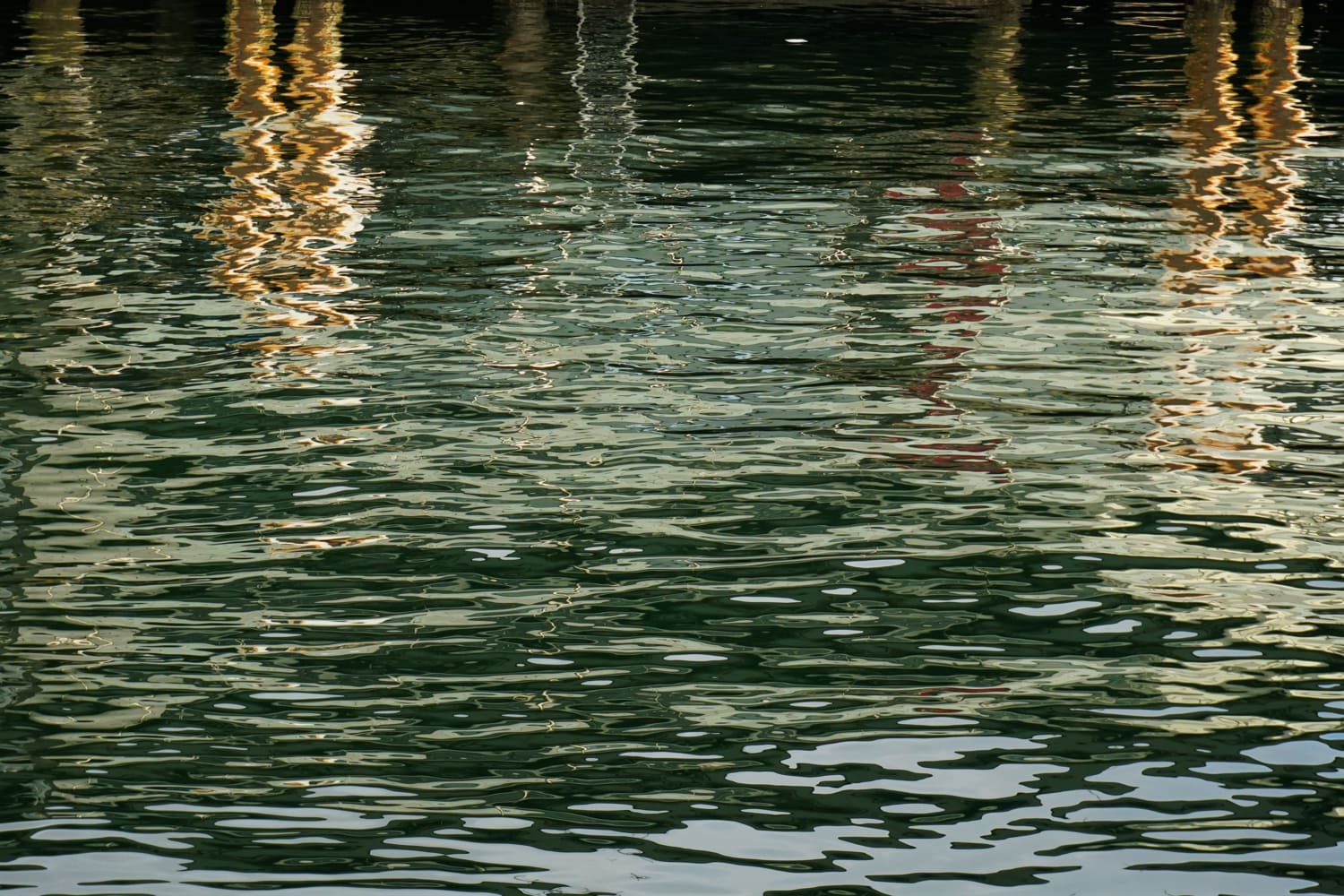 Anthea Callen argues, ‘The real ‘modernity’ of the Impressionist enterprise lies in the painters’ material practices. Bold brushwork, unpolished, sketchy surfaces, and bright, ‘primitive’ colours were combined with their subject matter – the effects of light, the individual sensation made visible – to establish the modern as visual.’[ii]

‘I have nature and art and poetry, and if that is not enough, what is enough?’ Vincent Van Gogh[iii] 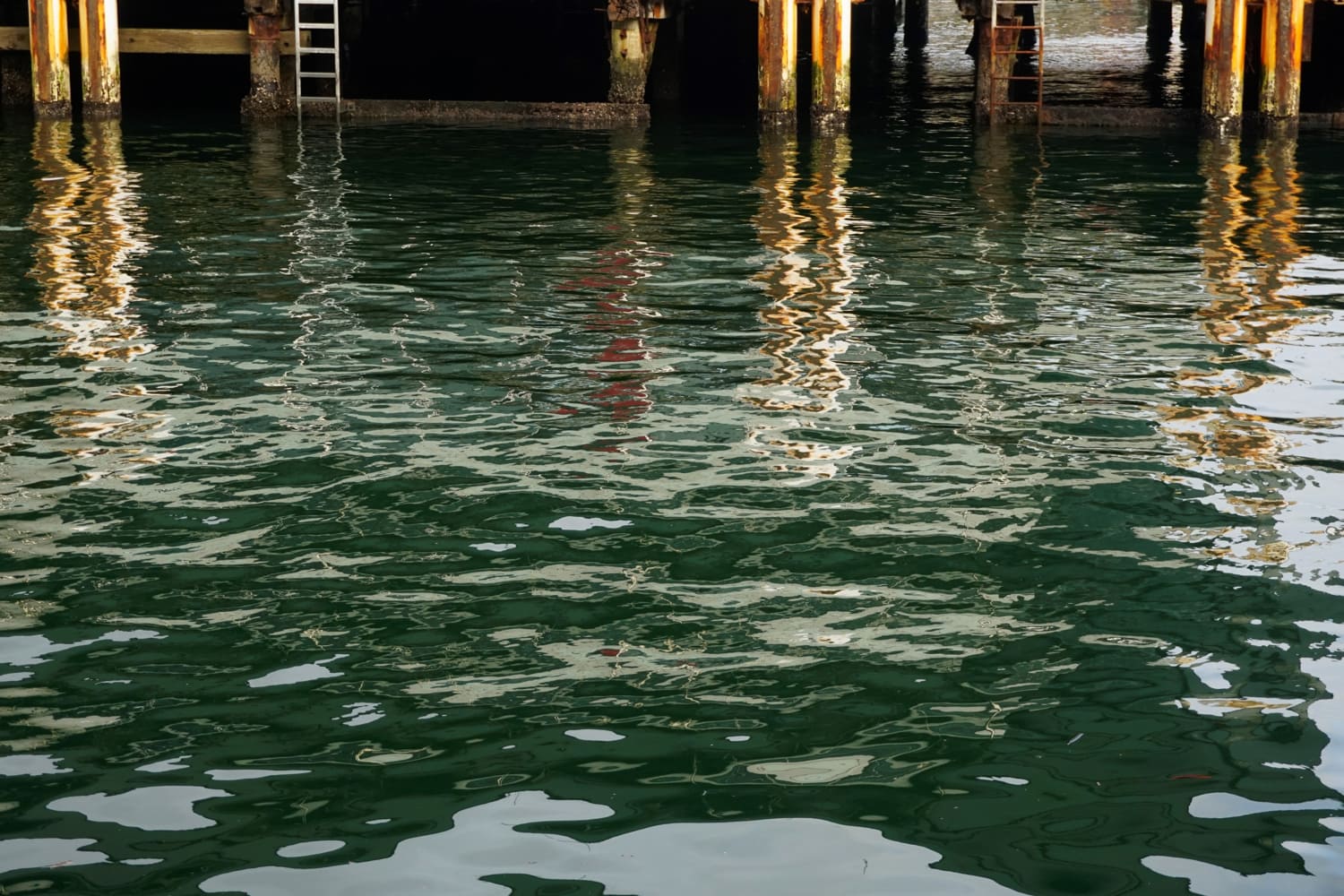 When a wave of visible light travels through air and strikes water’s surface, its incident energy is partially reflected from the surface, but mostly transmitted into the water (refracted and reflected rays). Water reflects about 4% or less of the incident light from above. You can look down and see a reflection as well as the shallow bottom of a lake or harbour. As you look from higher angles of incidence, the amount of reflection increases.

[ii] Anthea Callen, The Art of Impressionism – painting techniques and the making of modernity, Yale UP, 2000. Publisher’s note.