In the US, as elsewhere, staples like grains, were bought in stores where they were weighed and packed according to the shopper’s requirements. From1880 however, fast-growing companies such as Heinz, Procter and Gamble, the National Biscuit Company (Nabisco), Kellogg’s and Pillsbury began to brand and package a wide range of products for national distribution. Brands were born. And brands fight hard to stay brands.[i]

We are enmeshed in the existing systems of production and consumption. Brand-preference is a feature of late capitalism and the modern global economy. Brands are the belly of the consumer tiger. One’s taste in food, clothes, culture, art creates social capital. Thorstein Veblen was the first to write that the accumulation of wealth does not convey societal status, but that the ‘evidence of wealth’ does, coining the phrase ‘conspicuous consumption’.[ii] And conspicuous consumption is percolating down.[iii]

Naomi Klein in her book, No logo, claims, The astronomical growth in the wealth and cultural influence of multinational corporations over the last fifteen years can arguably be traced back to a single, seemingly innocuous idea developed by management theorists in the mid-1980s: that successful corporations must primarily produce brands, as opposed to products. [iv] 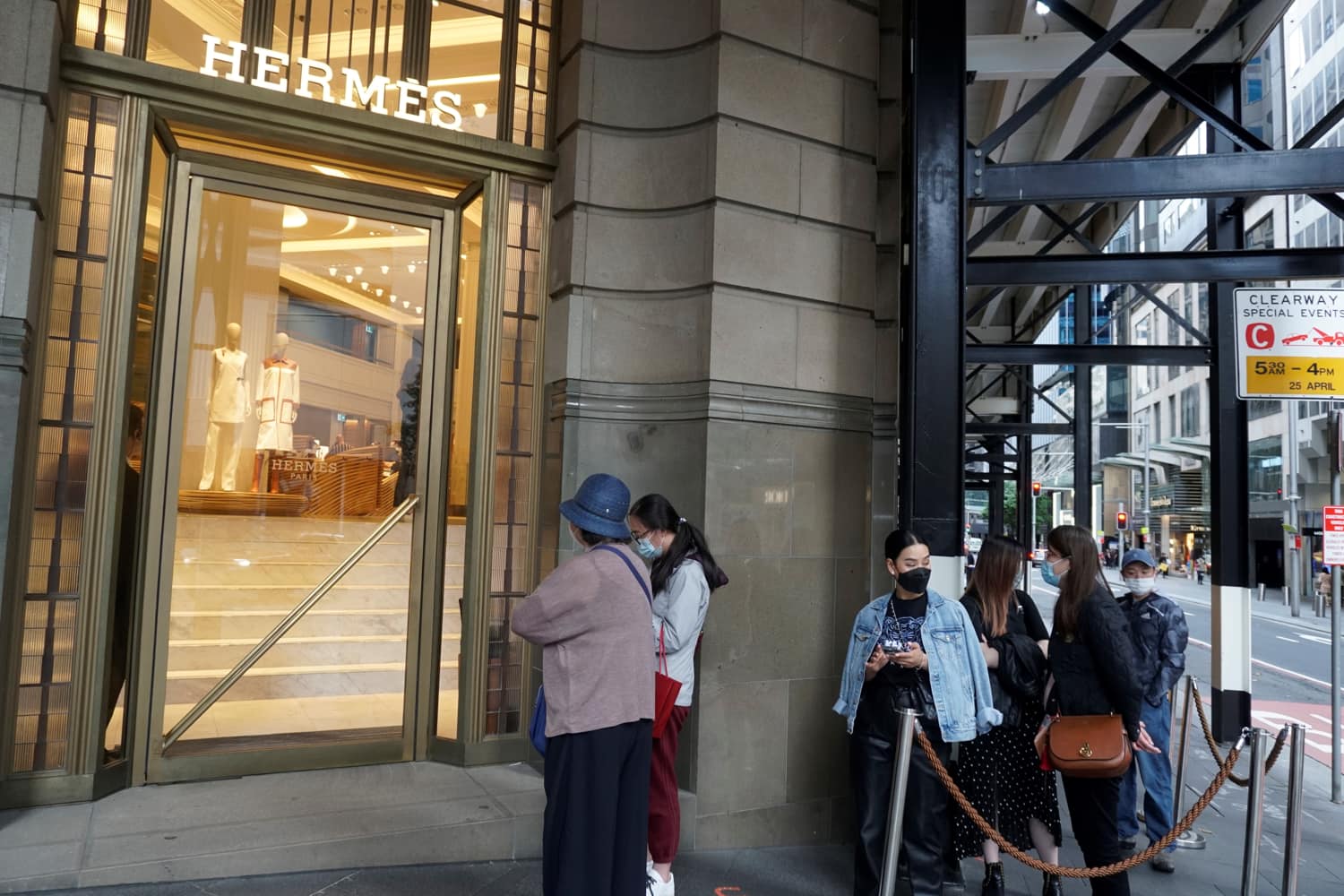 ‘The power of branding can help a company triumph in a price war, thrive in a recession, or simply grow operating margins and create shareholder value. Like the brand itself, the premium investors are willing to pay for the stock with a branding edge is almost entirely a psychological choice.’[v] And now we have to be on the lookout for brands green-washing, the sustainability credentials. 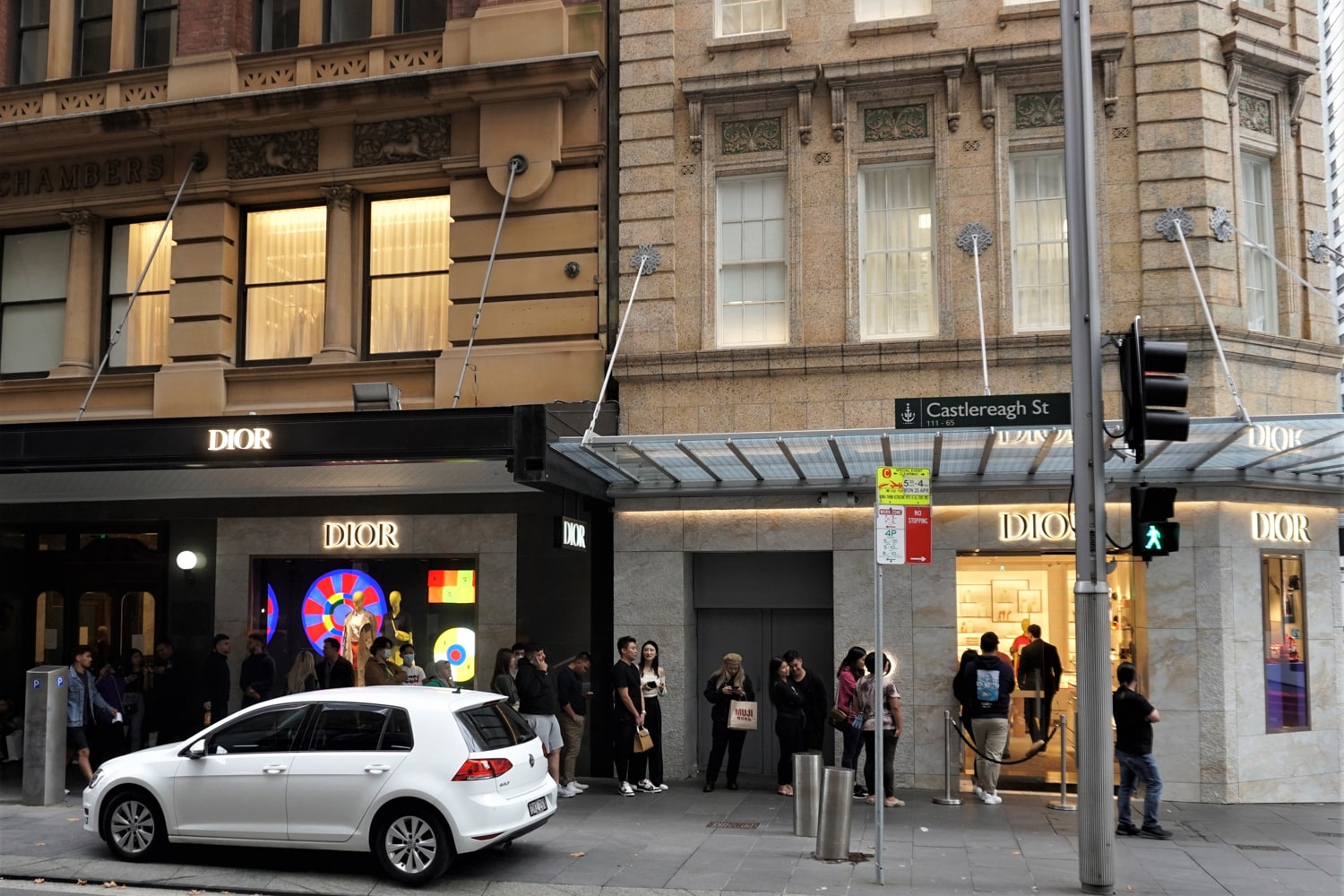 How things change. When I was in China in 1981, one of the first backpackers in the country. There were no private shops. I found one stall in Shanghai at the end of a short alleyway and that sold only one product, ceramic busts of Beethoven. I travelled round the country on steam trains which usually had two young women in white tunics who were DJs. I loved much of what they played, soothing on the long, rough journeys, wooden seats, smut in the eyes, and I bought irreplaceable cassettes. I made a request for western music, and the only choice was Beethoven.

Inspirational slogans on giant billboards extol the Chinese mantra: ‘Work hard and all your dreams will come true’

For marketing these shops are using sacred sites and art, anything is grist to capitalism especially the new, which modern art excels at. As Walter Benjamin wrote, ‘Newness is a quality independent of the use-value of the commodity.’ Novelty is part of the accelerating invention and disintegration of culture.[viii] 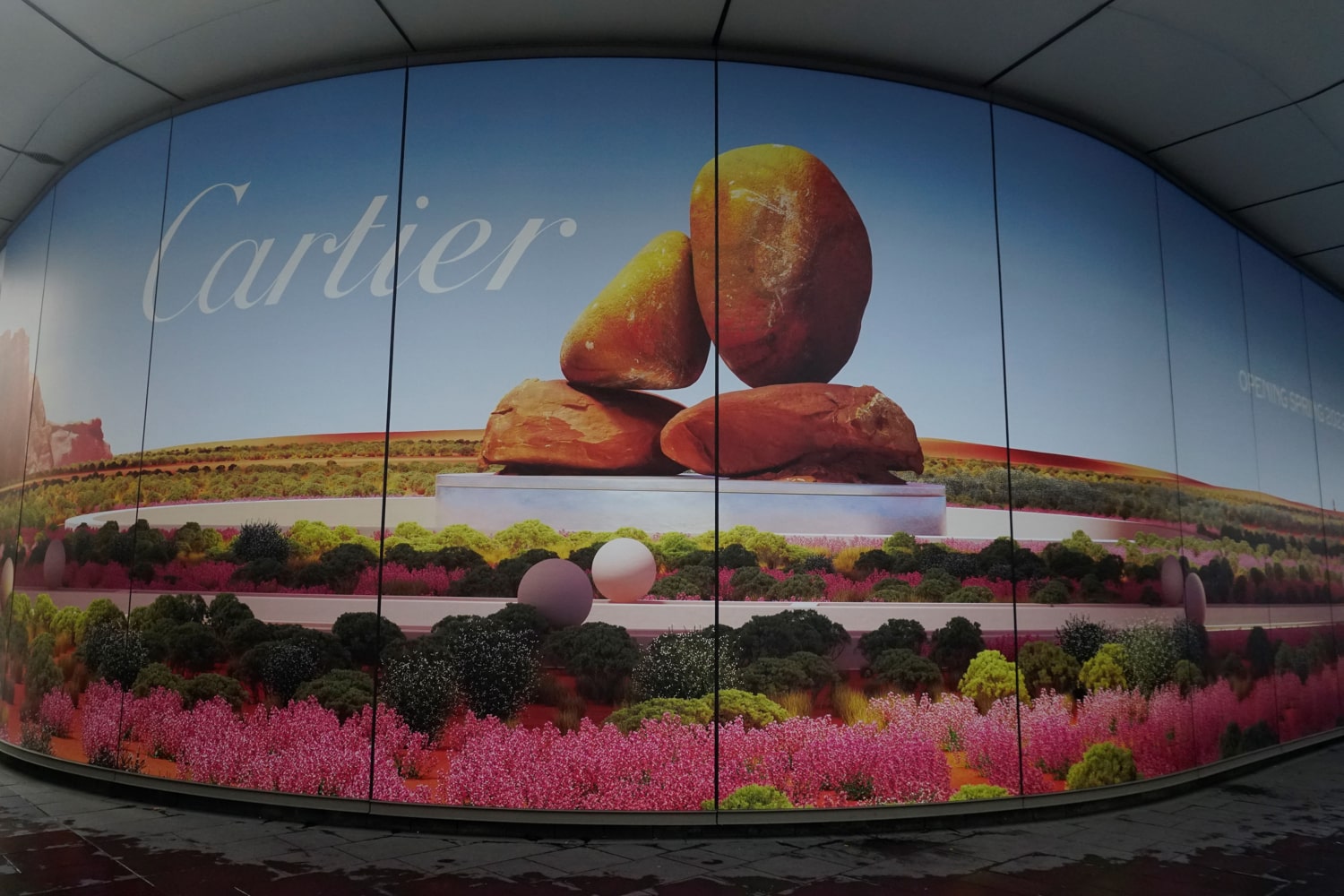 Under advanced capitalism, commodification reaches into every corner of social, cultural and political life. How many people looking at the huge Cartier mural see the boulders as borrowed from Karlu Karlu (Devil’s Marbles, Northern Territory). A wondrous sacred site for the Warumungu.[ix] One story is that ‘Arrange’ an ancestor, made a hair belt, only worn by initiated Aboriginal men. When he twirled the hair to make the belt, clusters were dropped on the ground, which became the boulders.

How many looking into Tiffany’s window display see Keith Haring’s heart being uplifted by two men. How may realise Audrey Hepburn was a prostitute? How many know Haring was a Street artist and AIDS activist? Christopher Lasch writes, ‘Make it new is the message not just of modern art but of modern consumerism, of which modern art is largely a mirror image.’ [x] 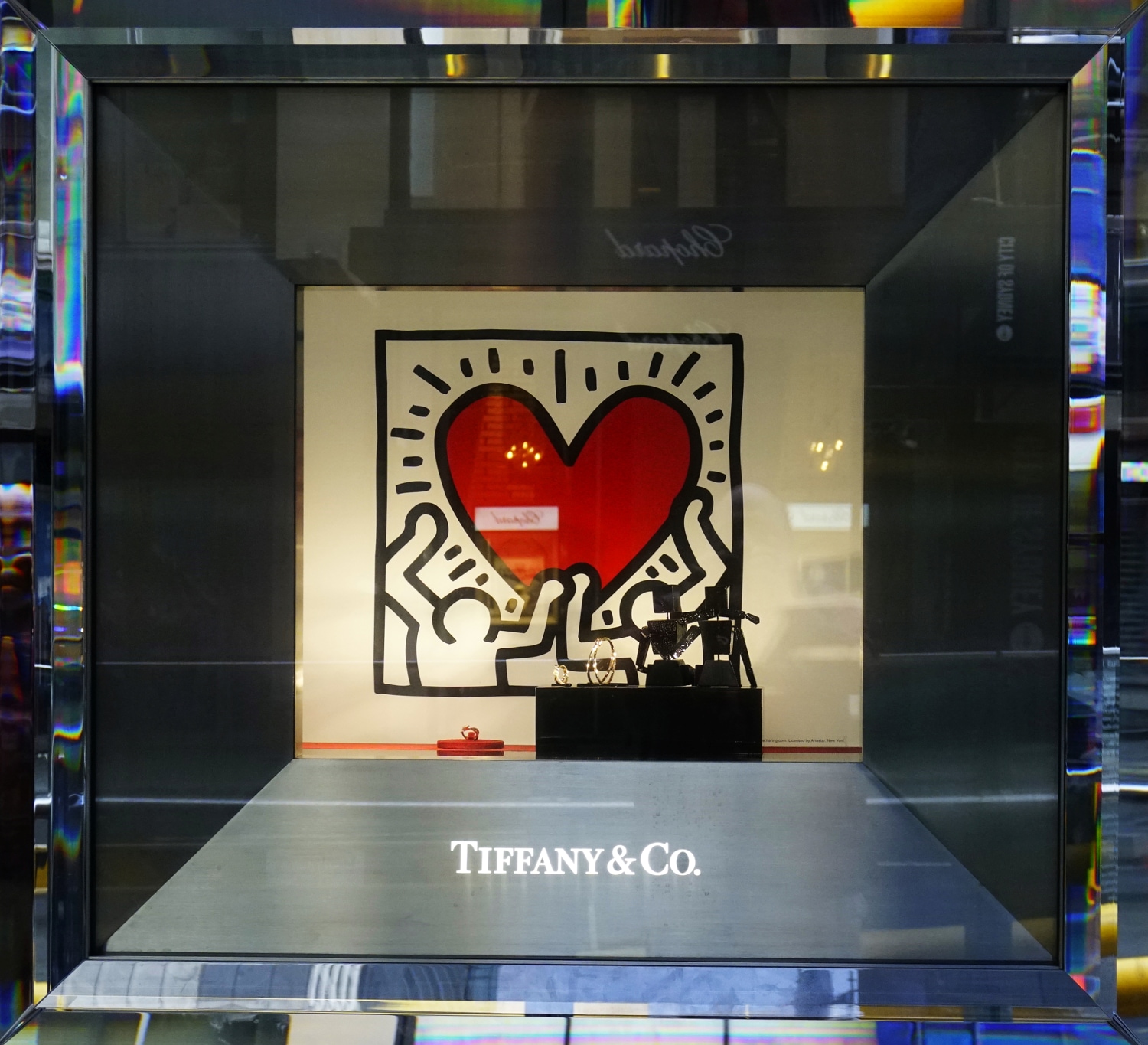 How many know that Haring’s art dealer was Tony Shafrazi who spray painted ‘Kill Lies All’ in foot-high red letters across Picasso’s Guernica at MoMA? I was here for the anti- war demos nearly twenty years ago. I was the Sydney convenor of Poets Against War. Nationally, we organised 10,000 Poems to Canberra to be handed to the Prime Minister John Howard. It didn’t stop that war or any others. Perhaps there were not many good ones, poems written in righteous anger rarely are. Wars are ongoing on this very day, Anzac Day, and not just in the Ukraine. The march is still going in the next street, a recognition of the sacrifices young men made, which I respect, but does not march far enough,

John Rawls proposed a theory of justice based not on happiness, but the distribution of goods, suggesting that we should imagine a veil of ignorance that keeps us from knowing who we are.[xi]

This may help us be objective on how society can become more just. Under the veil you are ignorant of your ethnicity, social status, gender and ideas of how to lead a good life – leading to fairness. Rawls’ thought experiment focused on the distribution of goods, but since then economic inequality has grown exponentially. Goods are commodities and the Italian economist Piero Sraffa defines capitalism as ‘the production of commodities by means of commodities’, labour, raw materials, manufactured goods, and through social media, emotions and happiness.[xii]

Rawls became worried that the capitalist societies had become so dominated by consumerism that meaningful self-government was unrealistic.

Justice entails more than fair distribution of goods, and it means removing the existing veils of ignorance. We need to know more and feel more. We are living in a veil of ignorance, of just unjust the world is for humans, other life forms and natural eco-processes themselves. We don’t realise the effect of our own life is having on the world as a whole, the Chinese, Bangladeshi, Vietnamese workers whose labour we wear, the birds we don’t hear any more, the starving children we see on adverts.

The Protestant work ethic (hardly Protestant) and a savings mentality, the cornerstone of the American way of life, frayed after the First World War. Charles Kettering of General Motors preached a new message: ‘The key to economic prosperity is the organised creation of dissatisfaction.’[xiii] General Motors introduced new models every year and ran advertising campaigns to persuade discontent with the cars people owned. Emphasis turned from production to brands and marketing consumption requiring vast publicity empires. [xiv] We don’t realise how we are being manipulated into unhappiness. William Davies talks of the Happiness Industry as part of capitalism’s need for compliant and productive workers/consumers: ‘The spirit of this agenda originates with the Enlightenment. But those who have exploited it best are those with an interest in social control, very often for private profit.’[xv]

[i] ‘McDonald’s, meanwhile, continues busily to harass small shopkeepers and restaurateurs of Scottish descent for that nationality’s uncompetitive predisposition toward the Mc prefix on its surnames. The company sued the McAl an’s sausage stand in Denmark; the Scottish-themed sandwich shop McMunchies in Buckinghamshire; went after Elizabeth McCaughey’s McCoffee shop in the San Francisco Bay Area; and waged a twenty-six-year battle against a man named Ronald McDonald whose McDonald’s Family Restaurant in a tiny town in Illinois had been around since 1956.’ Naomi Klein, No Logo,

[ii] Thorstein Veblen, The Theory of the Leisure Class, 1899. John Bugas (number two at the Ford Motor Company) coined the term consumerism as a substitute for capitalism to better describe the American economy in a 1955 speech. https://en.wikipedia.org/wiki/Consumerism

[iii] ‘While conspicuous consumption was originally intended as something exclusively for the rich, the latest research economists Kerwin Kofi Charles, Erik Hurst and Professor of Finance Nikolai Roussanova showed that this kind of behaviour is widespread especially among the poorer social classes and emerging economies.’ https://conspicuousconsumption.org/

[vi] Cath Clarke, ‘Ascension review – China’s bizarre descent into capitalist excess’, The Guardian, 10 Jan 2022. Jessica Kingdon, Ascension, an MTV Documentary Films, 2021. According to data published by the United Nations Statistics Division, China accounted for 28.7 percent of global manufacturing output in 2019. That puts the country more than 10 percentage points ahead of the United States, which used to have the world’s largest manufacturing sector until China overtook it in 2010. Felix Richter, ‘China Is the World’s Manufacturing Superpower’, May 4, 2021. www.statista.com

[viii] Walter Benjamin, ‘Paris the Capital of the 19th century’, 1938, part of his preparation for his unfinished Arcades project.

[ix] John Ross surveying the area for the Overland Telegraph Line in 1870, said: ‘This is the devil’s country; he’s even emptied his bag of marbles around the place.’ https://theculturetrip.com

[x] Christopher Lasch, his famous work is, The Culture of Narcissism: American Life in an Age of Diminishing Expectations, W. W. Norton, 1979.

[xi] John Rawls, A Theory of Justice, Harvard UP, 1971. He began this project with an article, ‘Justice as Fairness’, The Philosophical Review, Dec,1957.

[xv] William Davies, The Happiness Industry: How the Government and Big Business Sold Us Well-Being, Verso, 2016.