Looking for my totem in the city

Thinking of Uncle Mark who told me to choose my own totem.

Choose your own totem – with Uncle Mark Flanders

‘Last night (29 May, 2021) having just heard of his unexpected passing, Uncle Mark didn’t come to me in a dream, but I did dream that finally I chose my totem, Angophora costata (Sydney red gum, rusty gum, smooth-​barked apple).’ I wanted one that I have had a long relationship with, and one not just related to Gumbaynggirr Country. And not an animal or bird, I wanted haptic communication as well as a brilliant aesthetic.

I had been thinking about trees working with Forest Ecology Alliance (FEA). I had photographed some Angophoras in Newry State Forest where we are doing survey work.

I wanted a recognisable tree, if I was to pass on knowledge, and one not that common in this area. If I had chosen a Blackbutt I would have been overwhelmed with totems. My totem is particularly common on Hawkesbury sandstone and forms pure stands there. That’s where I got to love this tree.

We have one that self-seeded in our garden and is now growing fast.

Sydney red gum was first formally described in 1788 by German botanist Joseph Gaertner from material collected by surveyor David Burton around Port Jackson. From the time of invasion, a hollowed Angophora bark/gnarl the Cadigal used as container has been saved.[i]  The red bark exudate was dissolved in water and used to treat Diarrhea.

‘One of the biggest disappointments of the First Fleeters had been the poor building quality of the Sydney red gum (Angophora costata) which grew most commonly around Port Jackson.’[ii] As the logs are usually faulty it is often used for fuel. I hate the sound of chainsaws.

The term ‘eucalypt’ refers to three closely-related genera of the Myrtaceae family – Eucalyptus with 758 species, Corymbia with 93 species and Angophora with 10 species. Colloquially they are called ‘gum trees’. Angophora species have no flower bud cap and are easily distinguished from Eucalypts and Corymbia (bloodwoods) by their ribbed fruits and leaves arranged in opposite pairs. Recent genetic work has been published showing Angophora to be more closely related to Eucalyptus than Corymbia, and the name Eucalyptus apocynifolia has been proposed for this species IF it were to be placed in the genus Eucalyptus. Arguments continue.[iii]

Angophora costata trees can live over 100 years.[iv] The species responds to bushfire by resprouting from epicormic buds and its lignotuber; shoots on branches of older specimens arise a month, while shoots resprout from the trunk and base young plants within a month of a hot fire. Seedlings appear within 9 to 10 months. Flowers Showy. White. Flowers in Summer. Has perfect flowers (male and female parts in each flower).

The butts of fallen limbs form callused burls on the trunk. These healed over bumps add to their gnarled attractive appearance. The old bark is shed in spring in large flakes with the new salmon-pink bark turning to pale grey before the next shedding.

It is at its northern extent in NSW at Coffs Harbour (though widely distributed in south-eastern Queensland), and there are fine specimens along Coffs Creek where Uncle Mark grew up. The white flowers are eaten by Flying Foxes, and the seed by Rosellas. 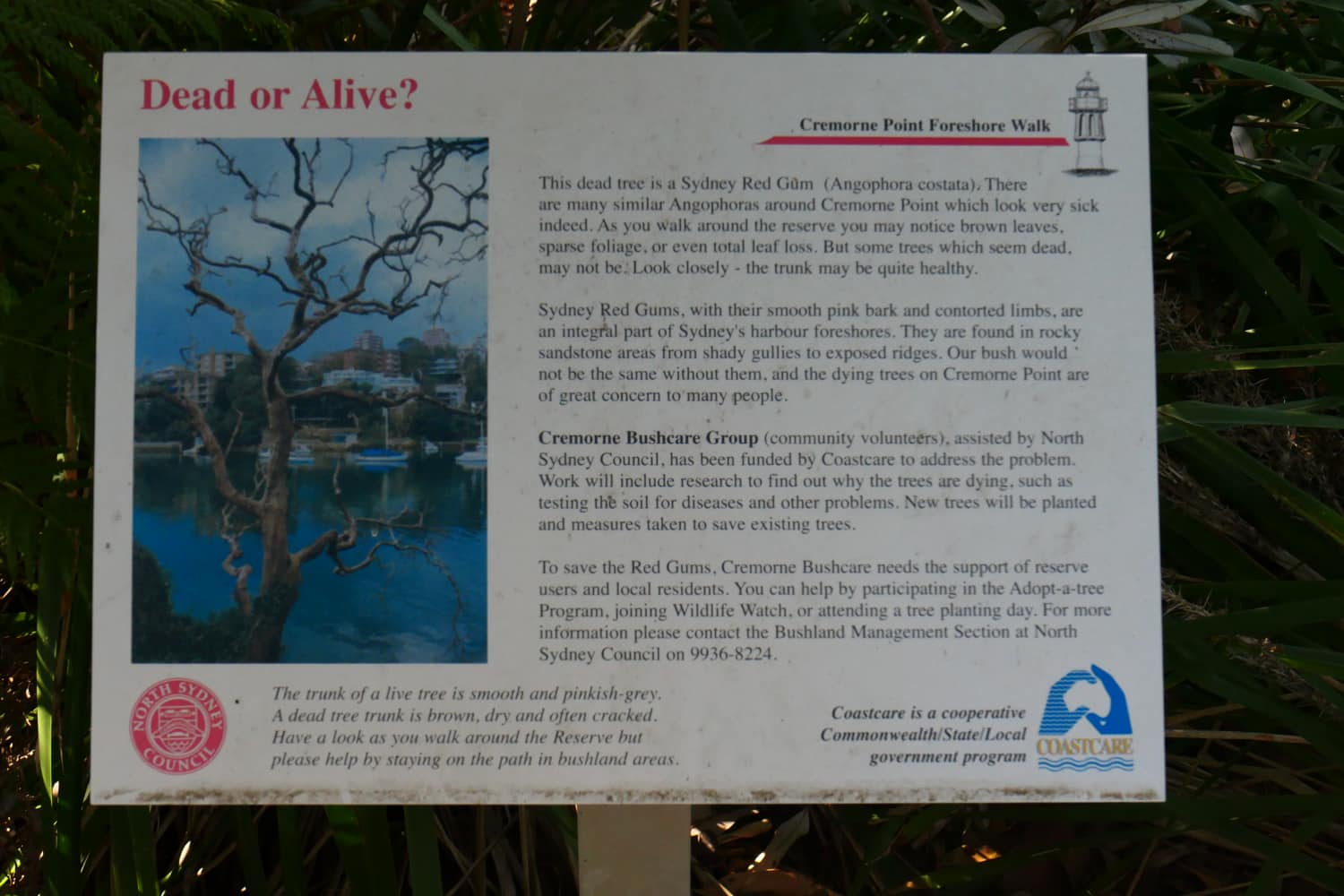 Increasingly, we may see trees dying because the environment is changing around them and they may not be able to cope. This is not just due to climate change, but also to urban development and agricultural expansion, pollution and even too much fertiliser acting as a poison. Even our most remote environments are subject to these changes.

It is not known where or when Phytophthora was introduced to Australia  but it now occurs in most states. Phytophthora has been identified in bushland on the northern shores of Sydney Harbour and is likely to have been there for some time. Dieback caused by Phytophthora is a national problem that is listed as a ‘Key Threatening Process’ under the Commonwealth’s Environment Protection and Biodiversity Conservation Act 1999 and the NSW Threatened Species Conservation Act 1995

This disease kills plants and infection is permanent. Even plants that are not highly susceptible will succumb during long periods of dry weather. The loss of root mass limits the amount of water and nutrients a plant can absorb, leaving it susceptible to insect attack, plant diseases and drought stress. The spores of Phytophthora can persist indefinitely in an area protected in the roots of plants, even those that are not susceptible to Phytophthora Dieback. Disease depends on three essential components: plant host, environment and the pathogen. Phytophthora occurs in areas with rainfall greater than 500 mm per annum. It is most active when the soil is moist and warm. It can also survive for long periods in plant tissue and soil during dry soil conditions. Favourable soil conditions for the disease are • warm moist conditions between 15 –30°C • poor drainage and/or open textured soil • soil low in nutrients and organic matter The only effective ways to combat Phytophthora Dieback are by • preventing introduction — keep it out • limiting the spread • reducing the impact of the disease.

I rang the number and found that the Council had tried treating the Angopheras with the fungicide Phosphonate (Phosphite) that boosts the plant’s natural defences. Research shows that it increases the resistance of susceptible plants to Phytophthora Dieback but it does not kill the pathogen. Council had limited success, but trees growing which seem to have more resistance. Young totem trees are growing on this point in patches of remnant bushland. 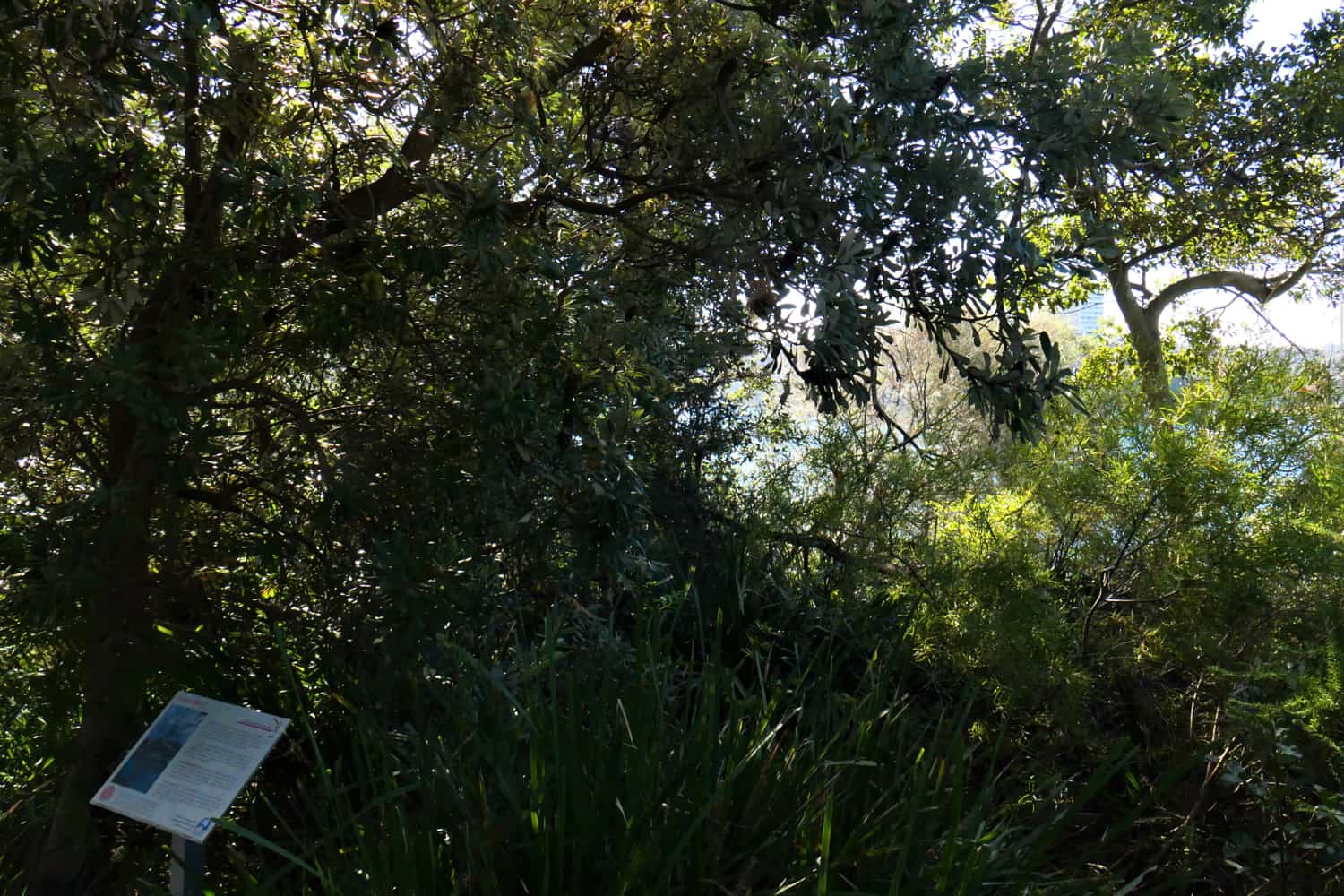 But trees are not defenceless. They can fight back with physical barriers or even chemical warfare. When one tree is attacked by these destructive forces, individuals may even signal to other trees to be aware and prepare their own defences to fight off death and decay.

‘Prior to European settlement, this area would have been a forest of turpentine and ironbark trees . . . The Newtown-St Peters area was also referred to as the ‘Kangaroo Ground’. Local Aboriginal peoples, the Gadigal and Wangal, hunted kangaroo on the grasslands here, and fished and camped at the swamps, creeks and rivers that crisscrossed the area.’ [v] 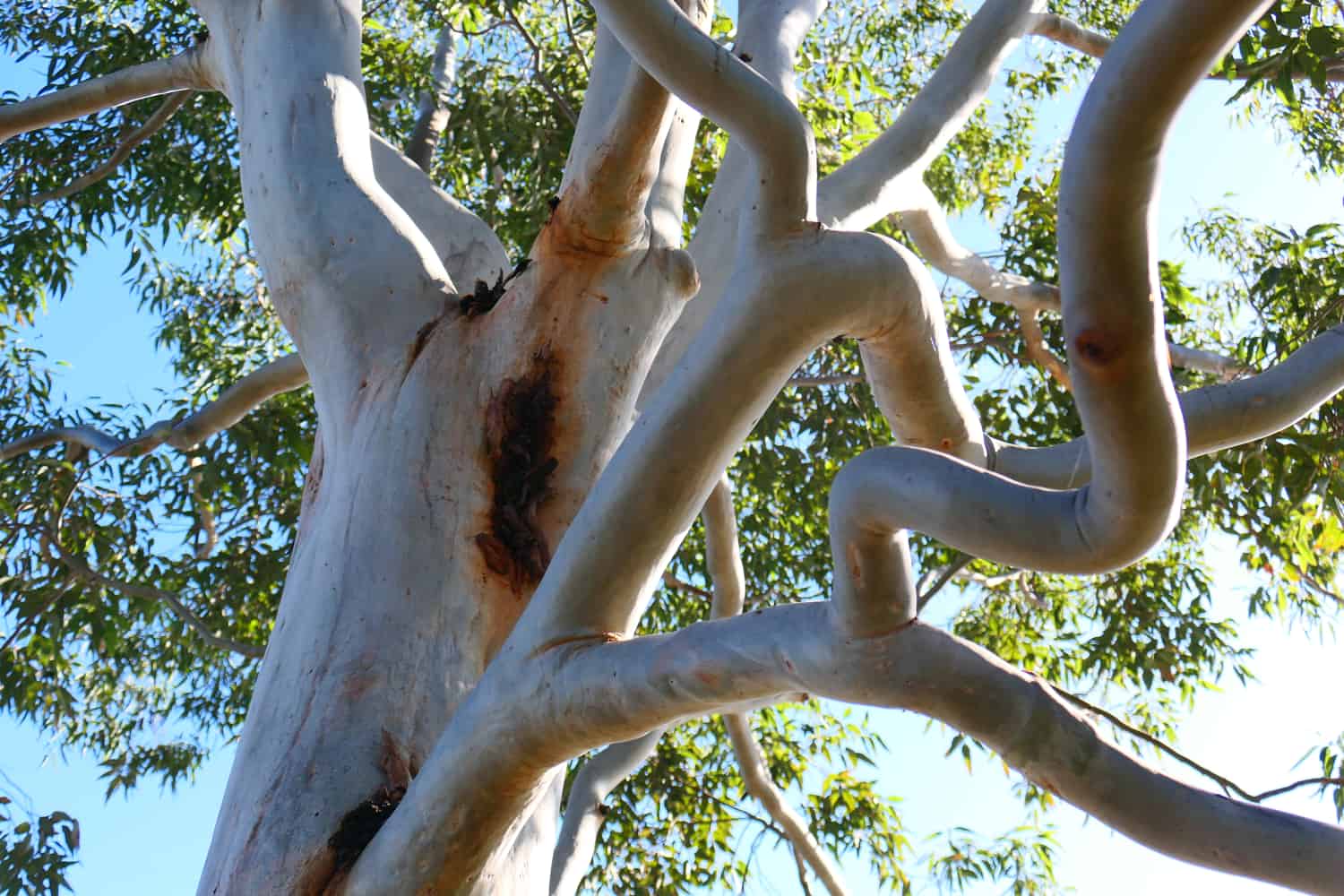 I find one specimen. my fingers
glide over the skin. Boughs wind
like snakes. The roots typically
glide over rock, over signposts
and fallen branches, they heal. 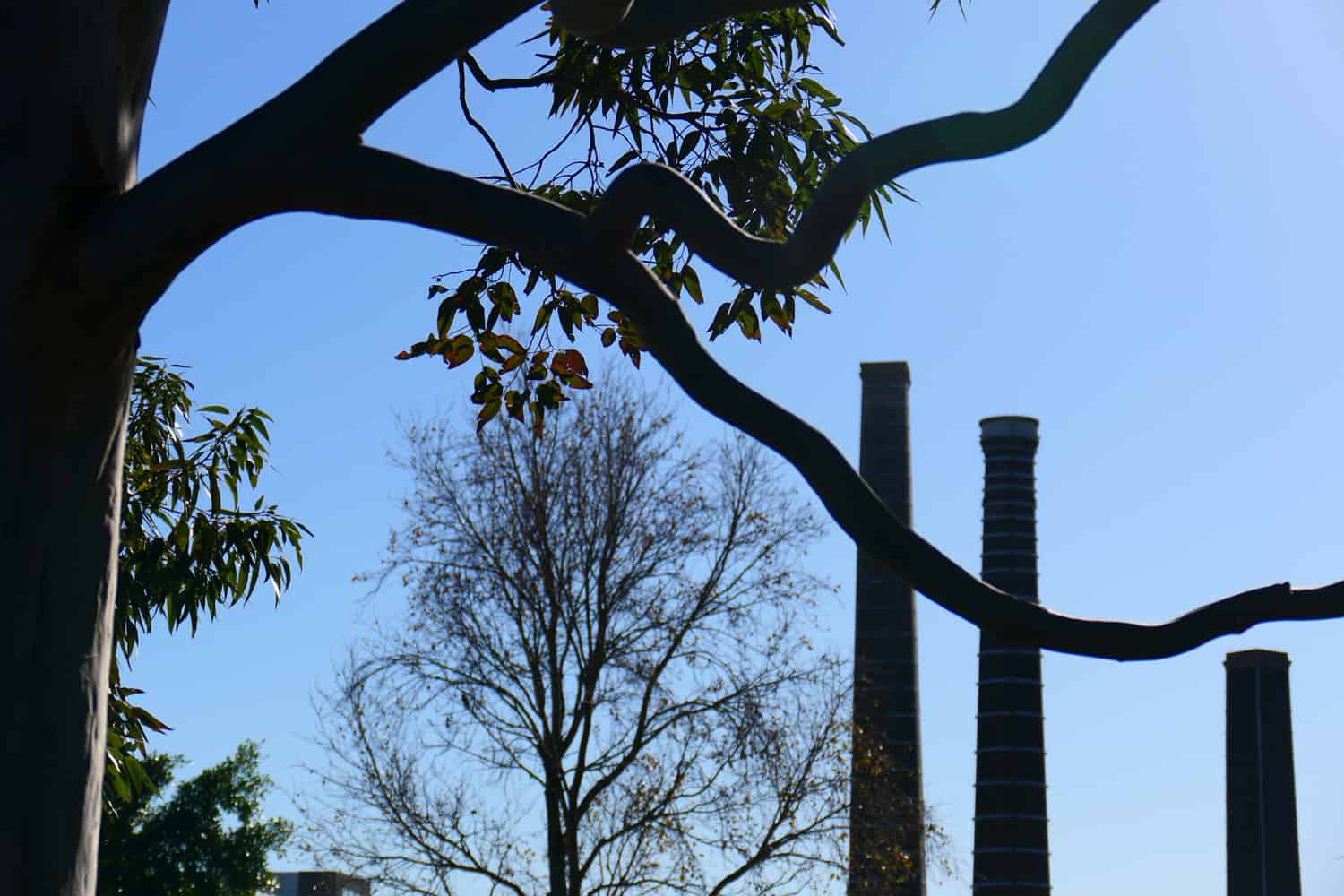 I am breathing in what this tree
is breathing out amidst the foul air
in the heart of Sydney. 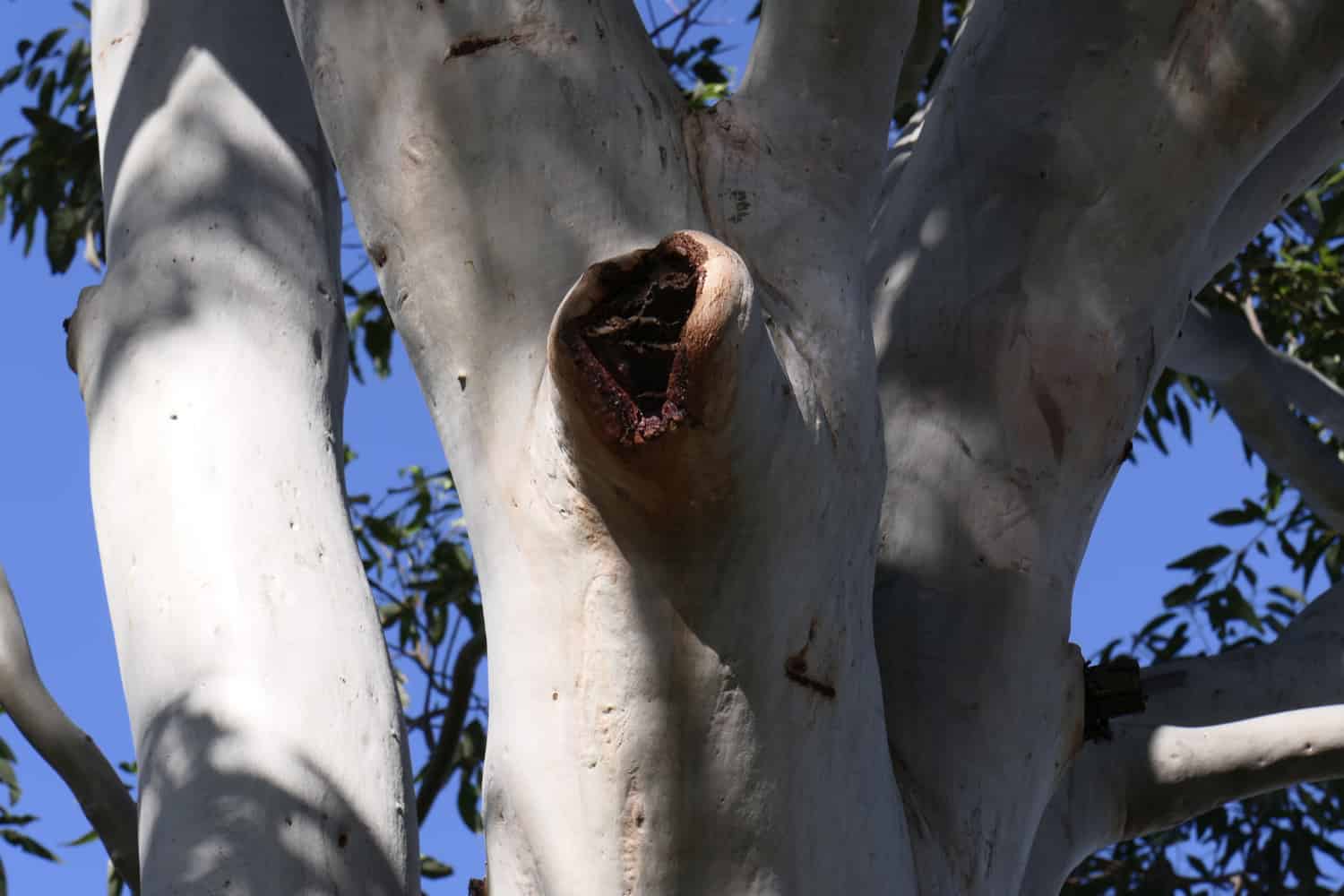 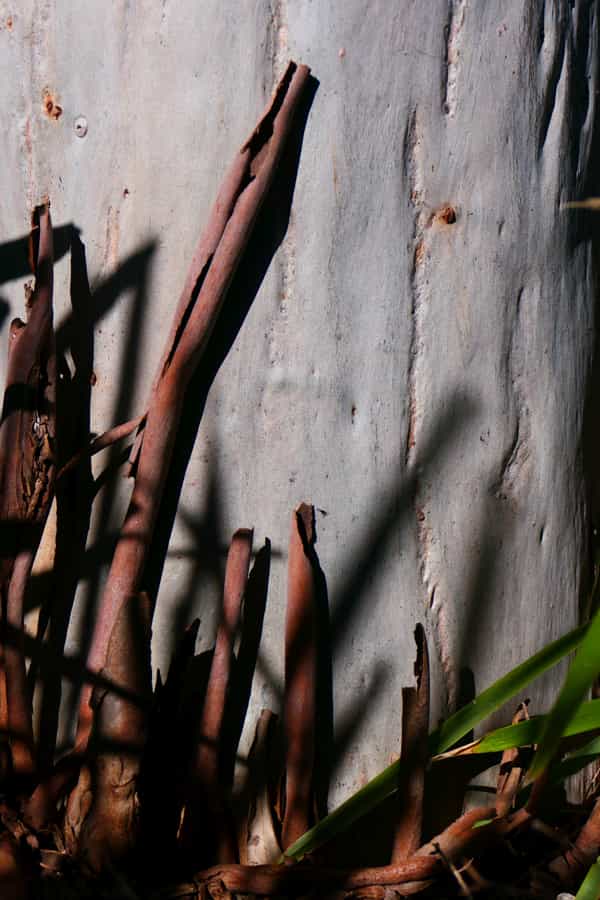 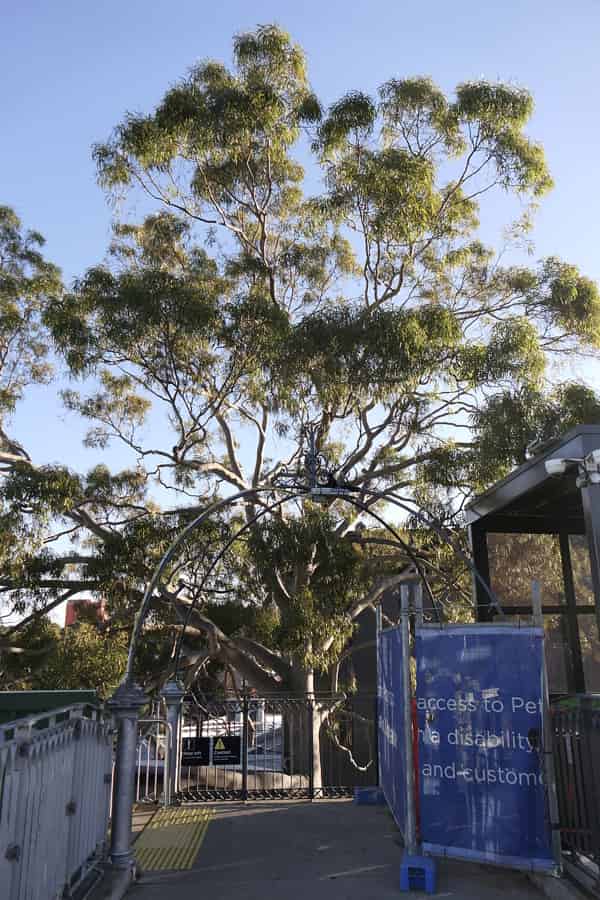 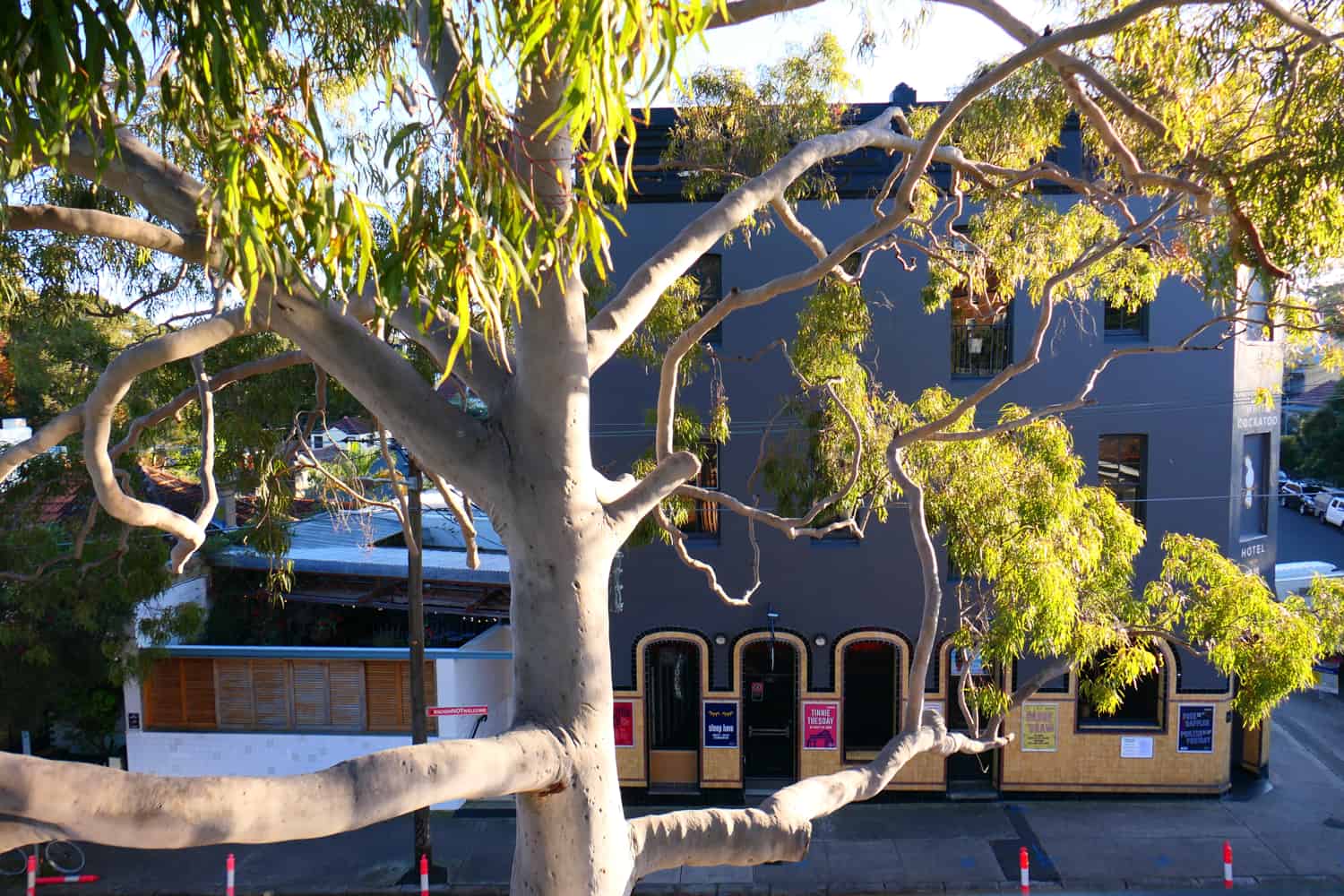 A beautiful specimen meets your gaze
on the walkway. Care is being taken. 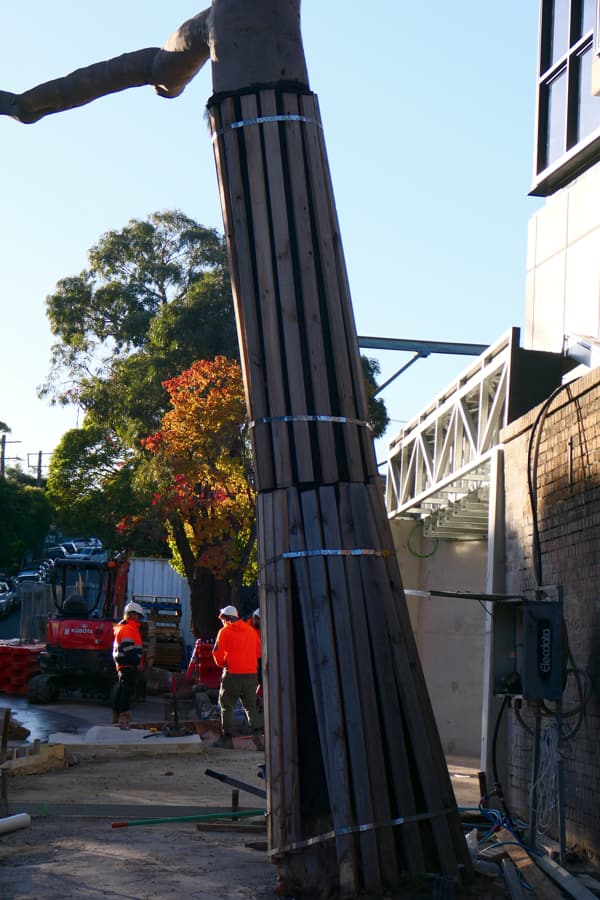 Aesthetic appreciation of trees is not new.

The writer and gardener John Evelyn is sympathetic to trees and forests in Silva (1669).[vi] Trees, especially oaks, recurring in the poetry of Anne Finch writing around 1700:
‘To future Ages may’st thou stand
Untouch’d by the rash Workman’s hand,
Till that large stock of sap is spent . . .’ [vii] William Gilpin makes a similar comment in Remarks on Forest Scenery (1791), one of his texts on travel the picturesque way:

‘Whenever trees can be turned to profit, they are commonly cut down long before they attain picturesque perfection. The beauty of almost every species of tree increases after its prime; and unless it have the good fortune to stand in some place of difficult access, or under the protection of some patron whose mansion it adorns, we rarely see it in that grandeur and dignity which it would acquire by age.’ [viii] By the late 18th and early 19th centuries many works by Romantic artists featured both dead and living trees, beauty and naturalness.

Every tree has a biography.[ix] Some ancient trees are living Noah’s arks; they are host to a precious cargo of rare and vulnerable organisms which rely on a continuity of old trees in our landscape if their future is to be sustainable.

For many species it is the natural process of decay, of hollowing and ageing that is important. Where cavities, splits and flaking bark are formed they provide nesting and roost sites for birds and bats. Individual tree stems can live for so long because of the structure of the wood and the tree’s defence mechanisms. The woody cell walls are very strong and resist breakage.

Scientists have recently discovered that these walls contain a structure – nanocrystalline cellulose – that is currently the strongest known substance for its weight. Wood is broken down and eaten by insects and fungi. Ecosystems rely on the recycling of nutrients.

See the Lonely trees for an account of new discoveries being made about forests and trees.

Peter Wohlleben:
‘One can’t help but wonder whether trees are so much better equipped at this mutual care than we are because of the different time-scales on which our respective existences play out. Is some of our inability to see this bigger picture of shared sustenance in human communities a function of our biological short-sightedness? Are organisms who live on different time scales better able to act in accordance with this grander scheme of things in a universe that is deeply interconnected?’[x]

‘Although trees may feel nothing of our attempts to communicate, we, for our part, definitely experience a physical reaction. I encourage you to experience this for yourself. Make a plan to go outside and immerse yourself in nature. If there is a forest near you, make that your destination.’ [xi]

‘I was tired of speed. I want to live to tree time.’

‘I was not the only one who had regarded the tree as a human or the human as a tree.’

‘I liked too how trees thrived on things that were still freely available—water, air and sunlight; and no mortgage in spite of their lifelong occupation of land.’[xii] 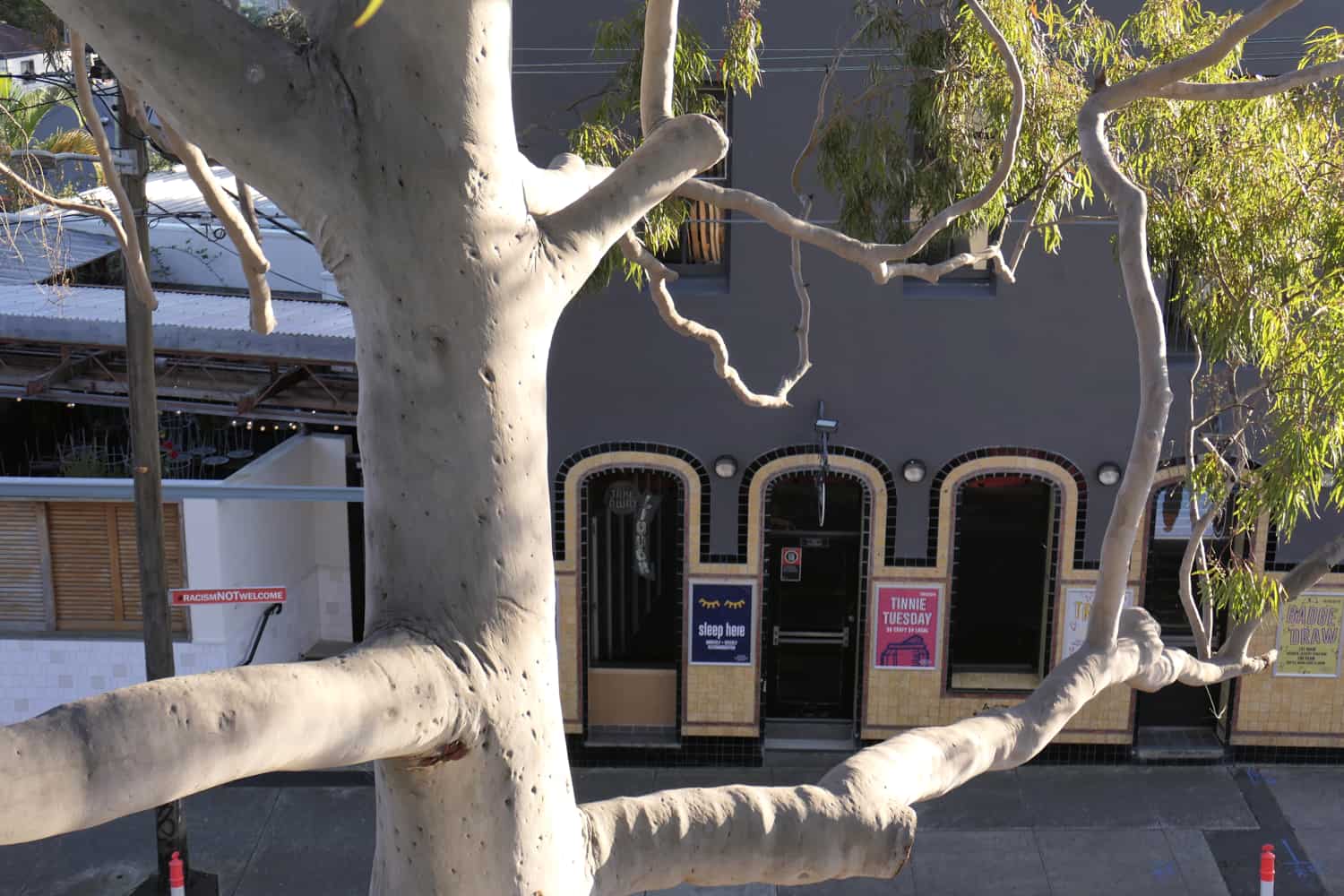 [i] Port Jackson area (Sydney Harbour), White 1790 [1962]:157. See Smith, B. & A Wheeler (eds), The Art of the First Fleet and Other Early Australian Drawings, Oxford UP in association with the Australian Academy of the Humanities and the British Museum (Natural History), Melbourne, 1988, Plate 50.

[iv] The name derives from the Greek words Angophora for vessel or goblet, and to  carry, referring to the shape of the fruits or capsules and costata – ribbed; the capsules bear prominent ribs. Tiny seeds fall from gum nuts.

[ix] James P. Jackson, Biography of a Tree, Jonathan David Publishers, 1979. He tells the story from an acorn to the death of a mature tree.

[x] Peter Wohlleben, The Hidden Life of Trees, What They Feel, How They Communicate, Greystone Books, 2017.

[xi] Peter Wohlleben, The Heartbeat of Trees: Embracing Our Ancient Bond with Forests and Nature, Greystone, 2021. 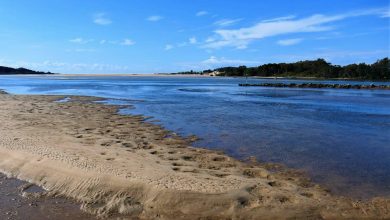