Standing and thinking of England
Feb 9, 2016

Quotes from Wodehouse in italics

The Right Hon. was a tubby little chap who looked as if he had been poured into his clothes and had forgotten to say “When!”

Between the ages of eight to ten at prep school, after a two minute cold or luke-cold shower, with two minutes of drying time, measured by our house master, Father Clement, playing his clarinet, we would shiver through the draughty corridors and up the spiral staircase to Junior Dorm. There we would sit in our pyjamas and dressing gowns on benches and Fr Clement would read to us.

I know I was writing stories when I was five. I don’t know what I did before that. Just loafed, I suppose.

The diet was Mark Twain, G.K. Chesterton and occasionally P.G. Woodhouse. I had forgotten all this until last night when I watched ‘Wodehouse in Exile’ with Tim Pigott-Smith playing Wodehouse to a T. [i]

Into the face of the young man who sat on the terrace of the Hotel Magnifique at Cannes there had crept a look of furtive shame, the shifty hangdog look which announces that an Englishman is about to speak French. 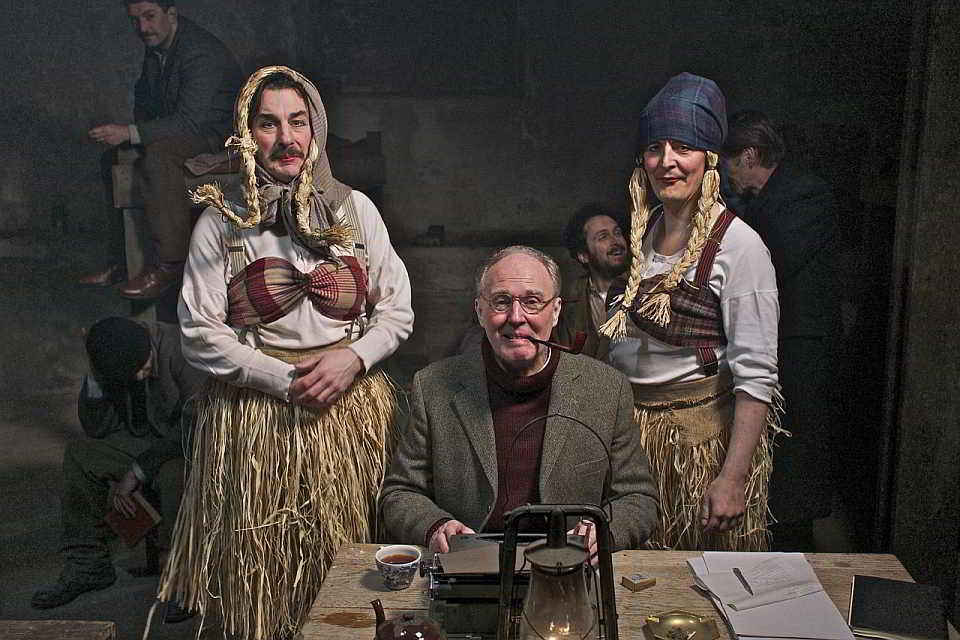 The program covered his capture in Le Touquet being transported to a lunatic asylum in Upper Silesia for internment and being released and chauffeured to a posh Berlin hotel. In Berlin he made radio broadcasts about his internment, which wasn’t too uncomfortable.

Mike nodded. A sombre nod. The nod Napoleon might have given if somebody had met him in 1812 and said, “So, you’re back from Moscow, eh?

These shortwave broadcasts were beamed to the UISA, not yet in the way. He never praised the Germans and merely wanted to let his large American audience know that he was OK, and that the men making the best of internment. His fellow internees were interviewed for an Omnibus documentary, and all believed he was innocent of treason.

He had just about enough intelligence to open his mouth when he wanted to eat, but certainly no more.

He didn’t realise he was being used. He wasn’t interested in war (and of course should have been). He was a daydreamer who lived to write. After the war he was ostracised as a traitor and went back to America, where he had lived for many years and first made his name. He never saw England again.

It is a good rule in life never to apologize. The right sort of people do not want apologies, and the wrong sort take a mean advantage of them.

Wodehouse said his England has long gone and it had. A bestseller between the wars was H. V. Morton’s In Search of England (1927), selling over a million copies by 1939. Morton idealised rural England, and just when the Nazis were talking of racial purity and pure Volksgemeinschaft (‘people’s community’),he was asking people to reconnect to their ‘common racial heritage’. In 1948, Morton moved to South Africa, writing in his diary, ‘I am glad to get away from Socialist England.’

I don’t want to wrong anybody, so I won’t go so far as to say that she actually wrote poetry, but her conversation, to my mind, was of a nature calculated to excite the liveliest of suspicions. Well, I mean to say, when a girl suddenly asks you out of a blue sky if you don’t sometimes feel that the stars are God’s daisy-chain, you begin to think a bit.

As it happens, rural England at the time was struggling. After the end of WW1, a world food surplus brought a calamitous drop in prices for agricultural produce. ‘From the late 1920s, farm bankruptcies soared, to a peak of 600 in 1932. Arable acreage dwindled. ‘The countryside itself assumed a desolate and abandoned appearance in many places, and a brooding spirit of pessimism permeated the outlook of a considerable proportion of its inhabitants.’ Between 1921 and 1938 the total of agricultural workers dropped by more than 25 per cent.’ [ii]

Everything in life that’s any fun, as somebody wisely observed, is either immoral, illegal or fattening.

My England has gone too, of being taught in classrooms with a map on the wall, the red of the British Empire and Commonwealth spreading across the world (I didn’t know then that there was so much bloodshed). I played rugby and cricket, read war comics and Wodehouse, listened to skylarks singing, played war games in the woods on long summer evenings, the digital age was not even a dream.

She had more curves than a scenic railway.

I was too young to recall the staleness.  ‘Society then was so oppressive and so false, particularly sexually. Neighbours had this prurience and primness and this awful kind of policing of each other’s lives. Nobody these days could imagine how dull things were and how respectful people were and how dead they were from the neck up.’ Playwright David Hare.[iii]
I was lucky, being a teenager in the late sixties when everything had changed.

A certain critic — for such men, I regret to say, do exist — made the nasty remark about my last novel that it contained ‘all the old Wodehouse characters under different names.’ He has probably by now been eaten by bears, like the children who made mock of the prophet Elisha: but if he still survives he will not be able to make a similar charge against Summer Lightning. With my superior intelligence, I have out-generalled the man this time by putting in all the old Wodehouse characters under the same names. Pretty silly it will make him feel, I rather fancy.

A jet-lagged moon sags beneath the quiet wood. We walk through the half-light, keeping an eye out for woodmice or the fat dormouse (Glis glis) introduced to Tring by Lord Rothschild a century ago, now localised pest, lover of apples, stripper of bark and electrical wiring, an alien scuttlebutt good for the pot. We reach the pond and wait for birds to come to us.

A jay’s rough call gives away a blue iridescence ripped in the luminance that has now lowered to flood the soft rush and bull rush switching on the golden spearwort and opening out the bindweed’s simple white origami, a signal for great tits to wriggle through the bushes and more birds to start to sing. Goldcrests flit far side, blue tits dance in the willow tops, a robin sings between us, a moment as we turn to blackberrying, a squirrel loops branches overhanging the carpet of fringed water-lilies. It seems such a reasonable lifestyle – rising with the sun, a singing breakfast then after a morning hunting and gathering, siesta, and a last song before night hauls in sleep.

The planets are aligned