The earliest dam in the historic record was built by King Menes, a little before 3000 B.C. at the start of the 1st Dynasty. Menes built a large dam around the city of Memphis to protect it from the occasionally catastrophic Nile floods. Earth dams were later built by the Babylonians to irrigate land. This dam was built purely for fun. 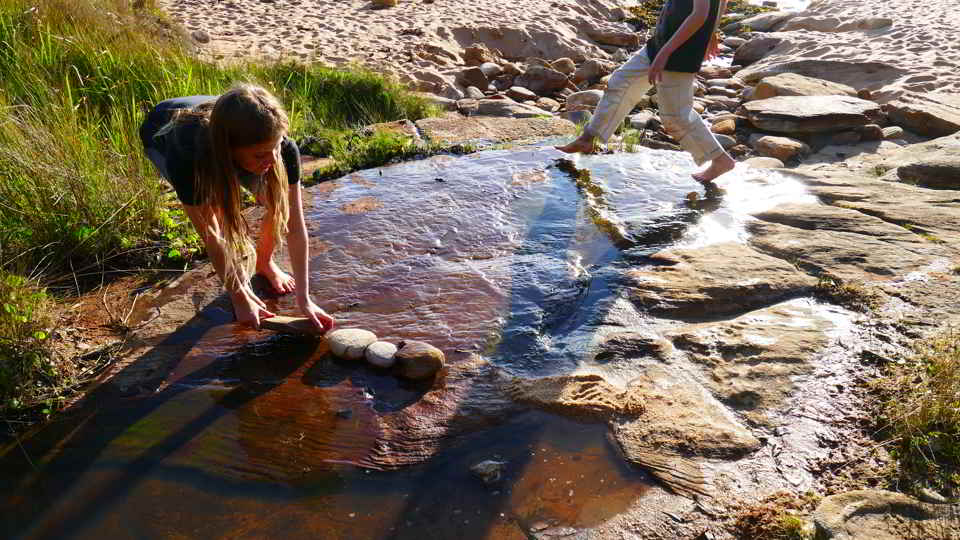 I’m not sure why kids build dams, but I did as a child. Perhaps it’s that sense of achievement in capturing that mercurial, transparent, mysterious substance that slips through the fingers. 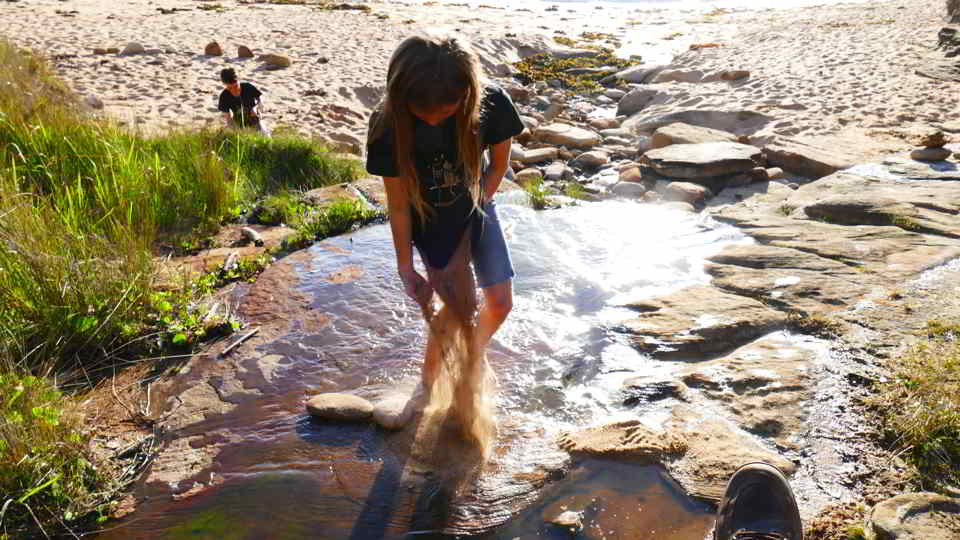 Kalena and Jeremy went to great efforts to construct one a little stream (with frogs calling and lizards under the rocks) trickling onto Bullimah Beach in Bouddi NP in NSW. They worked cooperatively and enthusiastically and had soon made a modest dam. 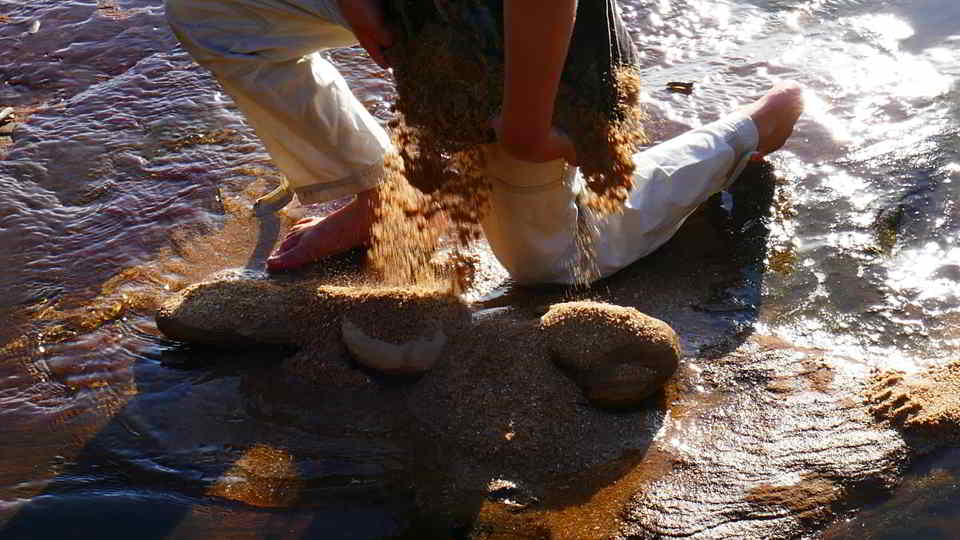 With bare hands one rock on top of another then another, packing a hut then adding language to build something the Romans did, like a house, fort or temple with all the weight of the world. The air we inhale is so light. 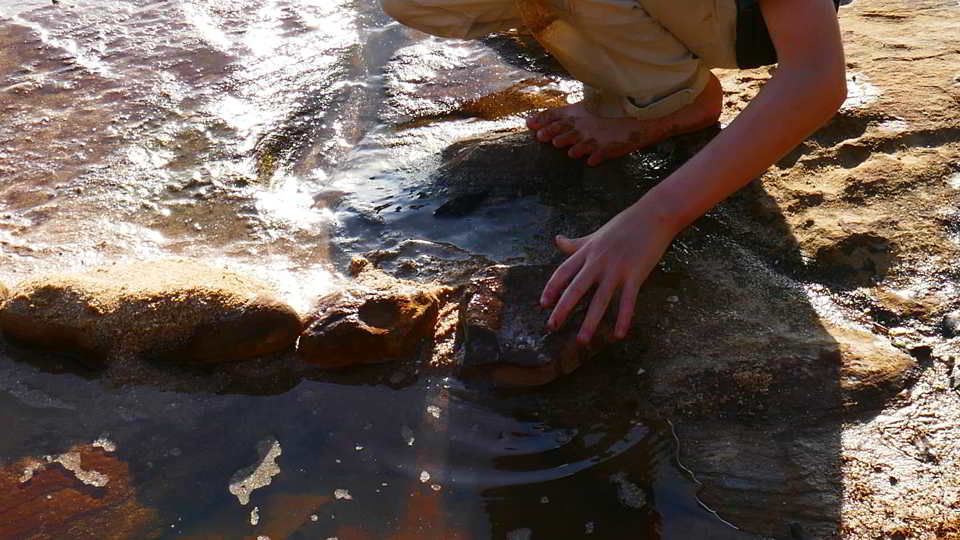 I recall the sense of achievement for having made a pool. I sailed leaves or pinned sticks together, using another as a mast with a large leaf as a sail. Play is both wonderfully pleasurable and functional; the kitten chasing leaves is developing hunting skills. The child is developing her imagination, planning, cooperation and conceptual skills. 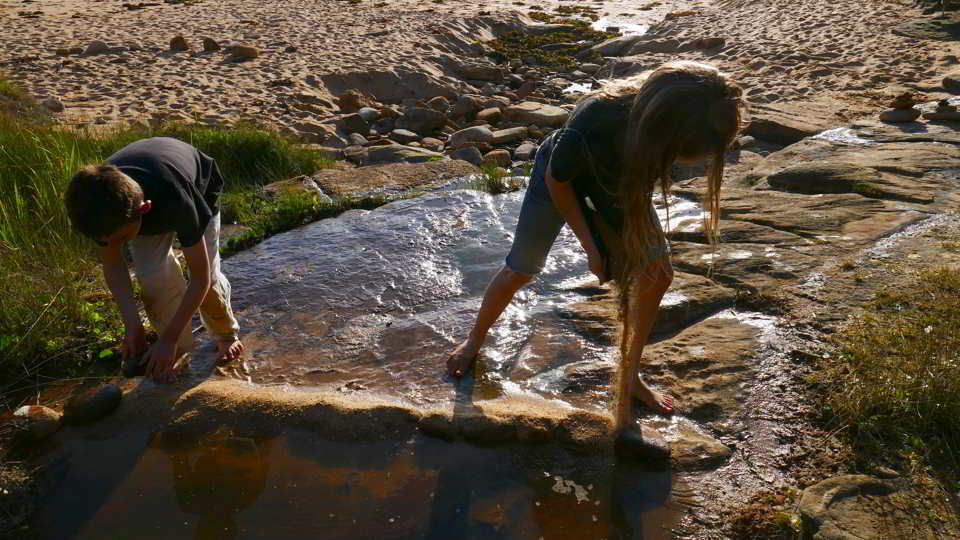 Controlling and playing with and in water is elemental. Constructing a dam using sand, mud, rock – elemental materials – is a more dynamic version of building sand castles (until the tide comes in). 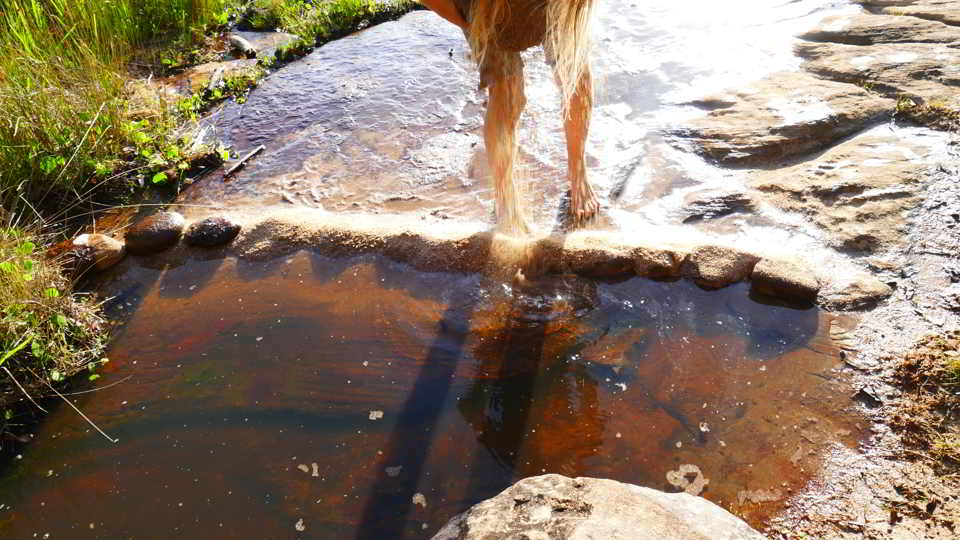 Even though you know when you sleep that the water will build and build until it flows over the top, or, and this is more likely, finds the weakest part of the wall and sneaks in, its trickle becoming a flood.

Jeremy opened up the dam wall to watch the water sluice through under control. Water has an ancient tradition of finding the sea.

‘Children play at hunting, gathering, hut construction, tool making, meal preparations, defense against predators, birthing, infant care, healing, negotiation, and so on and so on; and gradually, as their play become increasingly skilled, the activities become productive. The play becomes work, but it does not cease being play. It may even become more fun than before, because the productive quality helps the whole band and is valued by all.’ Peter Gray.

Playing outdoors, away from computers, TV, walls is beneficial in many ways:

•          Children with views of and contact with nature score higher on tests of concentration and self-discipline. The greener, the better the scores (Wells 2000, Taylor et al. 2002).

From Randy White, ‘Benefits for Children of Play in Nature’,

However, dams are very problematic. India and China are building and planning huge dams – see Sudha Ramachandran’s Water Wars: China, India and the Great Dam Rush: The construction of dams on major rivers has serious implications for millions living downstream.

From Sydney back to the Bush, January 2016