Robert Boyle was a friend of John Locke’s and key figure in the founding of the Royal Society), Pepys a keen member of the Royal Society founded in 1660, recorded Charles II ‘mightily laughed’ when hearing that scientists were ‘spending time only in weighing air’. (Probably Robert Boyle’s experiments on pressures of gas).

The beginnings of ‘scientific practice’ required both technology and enthusiasm which the ‘Occasional Meditationalists’ had in bucketfuls. They were natural theologists who needed to find God in the world without sharing Augustine’s vision of the world laced with vestigia dei, the traces and shadows of God, and at the same time avoiding the heresy of pantheism. For Robert Boyle everyday activities are part of God’s world and are thus capable of revealing truths. He wrote many meditations that follow whatever interested him and always with a sense of open possibilities. He was a strong advocate for the argument from design. His 100 meditations centre on his garden. George Swinnock, his contemporary, encouraged everyone to undertake personal meditations on the world and if possible write them down – a very democratic suggestion. Not everyone has a garden, but anyone can see a rainbow.

‘To the Reader. God has given us a large field to walk in, and choice of flowers, pluck what we will, to put into our nosegay. We may find matter not only for mediation but also for admiration if we consider a while the winde, the snow, the rain, the ice etc. all brought out of God’s treasury the strange apparitions often seen in the air, Lyons, raining blood, frogs, stones etc, all this may raise our admiration, view but the rainbow in its shape and various colours, it deserves our consideration.’

From this enthusiasm for the world came the Royal Society and the practice of science as we understand it today. Blood trickles from a leech bite and I think of Arthur Coga.

Pope Innocent VIII made Tomas de Torquemada the Grand Inquisitor of Spain and urged inquisitors to investigate diabolical sorcery. He had a least 16 illegitimate children, but by the summer of 1492 he was weakened and in a coma. He was given the blood, probably orally, of three young men – all four of them died.

In November 1666 a blood transfusion between dogs was undertaken by the experimental physician Richard Lower, encouraged by that brilliant man, Robert Boyle. Boyle was interested if blood had psychological properties. Would a fierce dog’s blood transferred to a tame pet maker it wild?

The first experiment by doctors on humans occurred the following November, Lower tried to obtain a madman as subject, but the Keeper of Bedlam refused. A volunteer was found and paid a Guinea, a certain Arthur Coga, Cambridge Divinity student, but ‘cracked a little in his head’ according to Samuel Pepys and described by Lower as ‘the subject of a harmless form of insanity.’

Mr Coga took sheep’s blood into a vein with no ill effects, ‘in the presence of many considerable and intelligent persons. Edmund King wrote, ‘The Man after this operation, as well as in it, found  himself very well, and hath given in his own Narrative under his own hand, enlarging more upon the benefit, he thinks, he hath received by it, than we think fit to own as yet. He urg’d us to have the Experiment repeated upon him within 3 or 4 days after this; but it was thought advisable, to put it off somewhat longer.’ I really want to know what happened to Arthur.

People died from human transfusions until after 1901 when blood group antigens and antibodies were discovered. And now we need the methos more than ever. 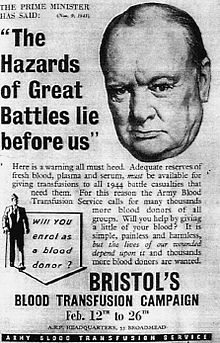 Pollution - living in a city shortens your life