The theme of UN World Oceans Day 2020 is ‘Innovation for a Sustainable Ocean’. UN, observances [Sign the Petition]

Before COVID-19, more than 600,000 Australian children were vulnerable to their family’s unstable circumstances. Modelling from the Mitchell Institute shows the pandemic has more than doubled that number to 1.4 million children. The Conversation

UK coronavirus victims have lain undetected at home for two weeks. Doctors say there have been dozens of cases and warn of ‘epidemic of loneliness’. The Guardian 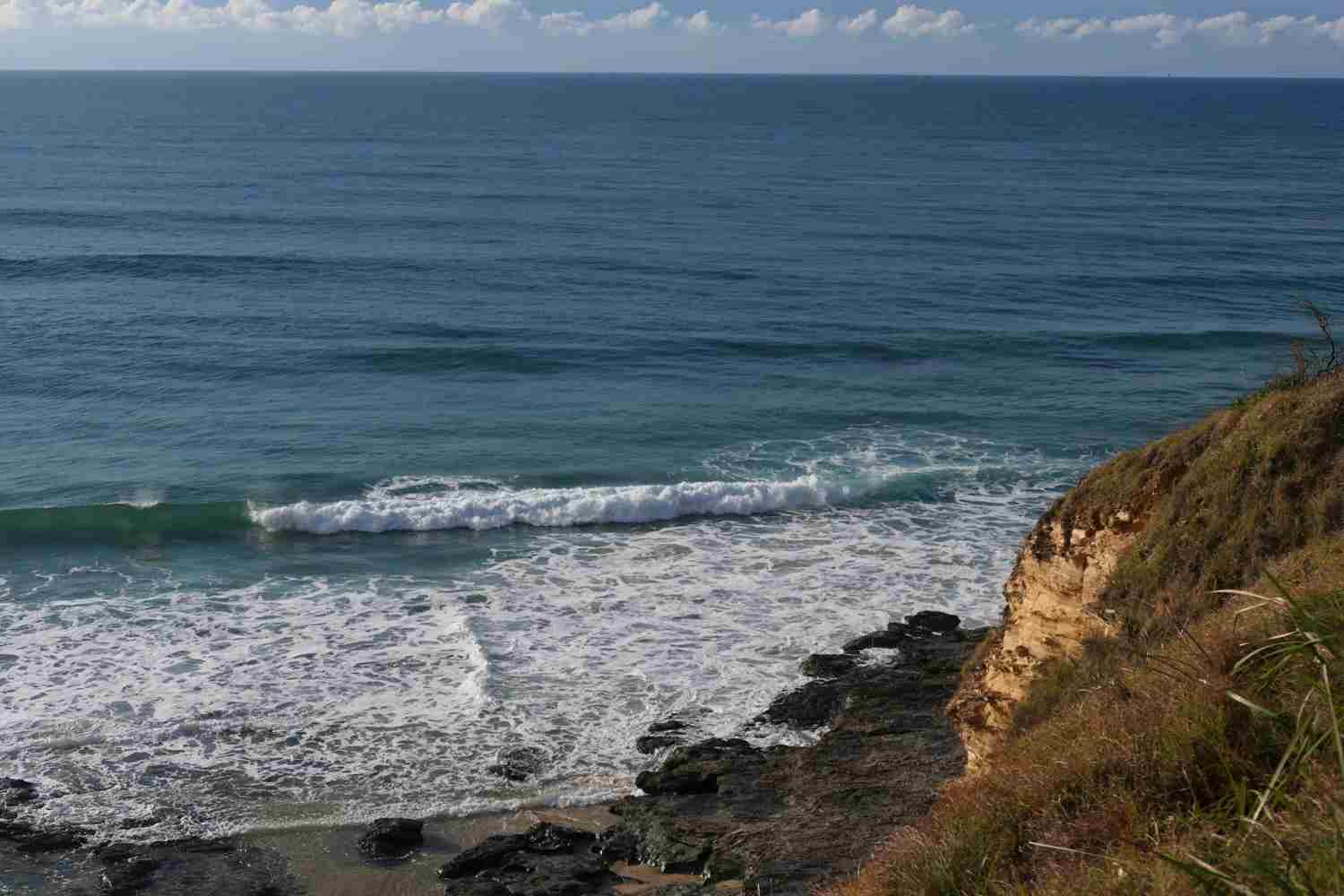 On the way to the forest I visit the ocean, pay my respects on World Ocean’s Day to a reliable multi-layered phenomenon that seems so enormous and beautiful that there’s nothing wrong. 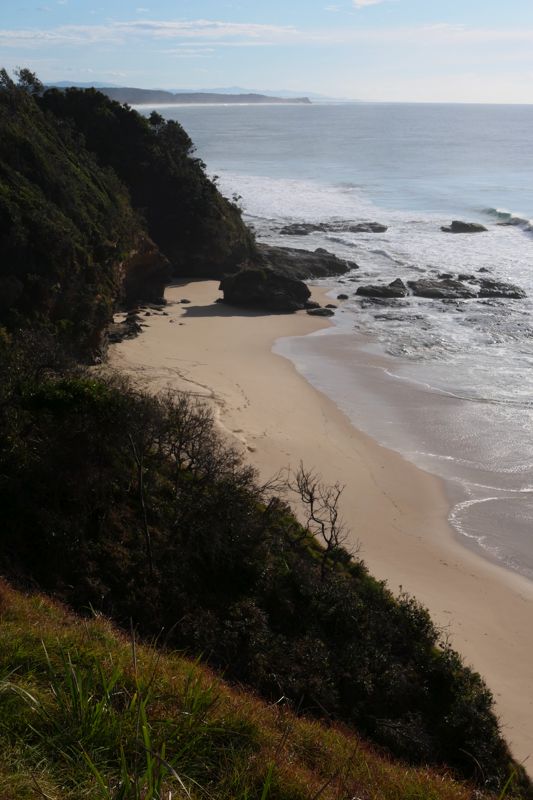 I spot two more whales on the edge of the horizon. 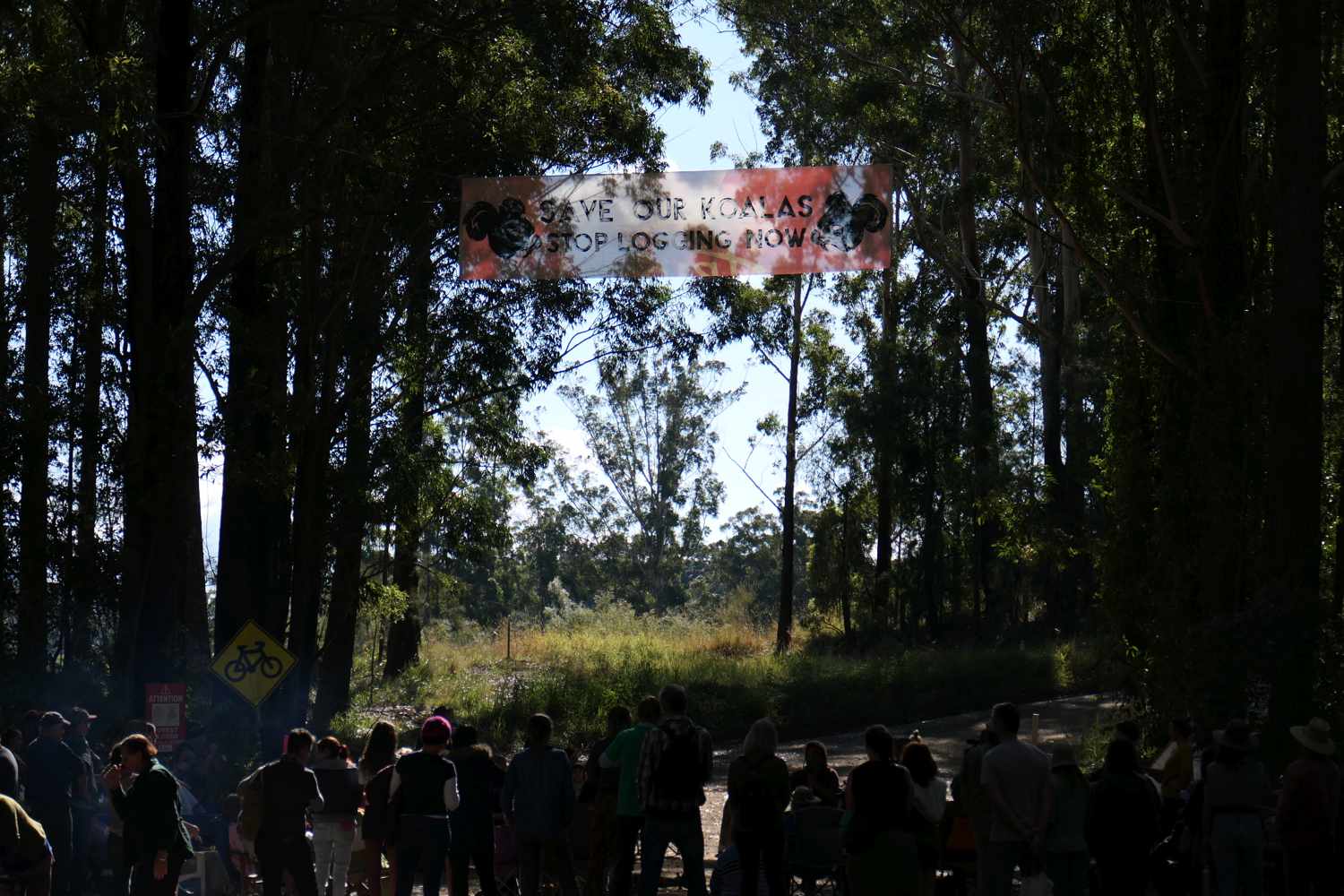 We arrive as Uncle Micklo Jarret is teaching the crowd a Gumbaynggirr song, then the Elders welcome us. Uncle Roger Jarret gave a short moving speech: ‘You didn’t know what was happening, it was hidden. You are our family . . . we have to become one.’ 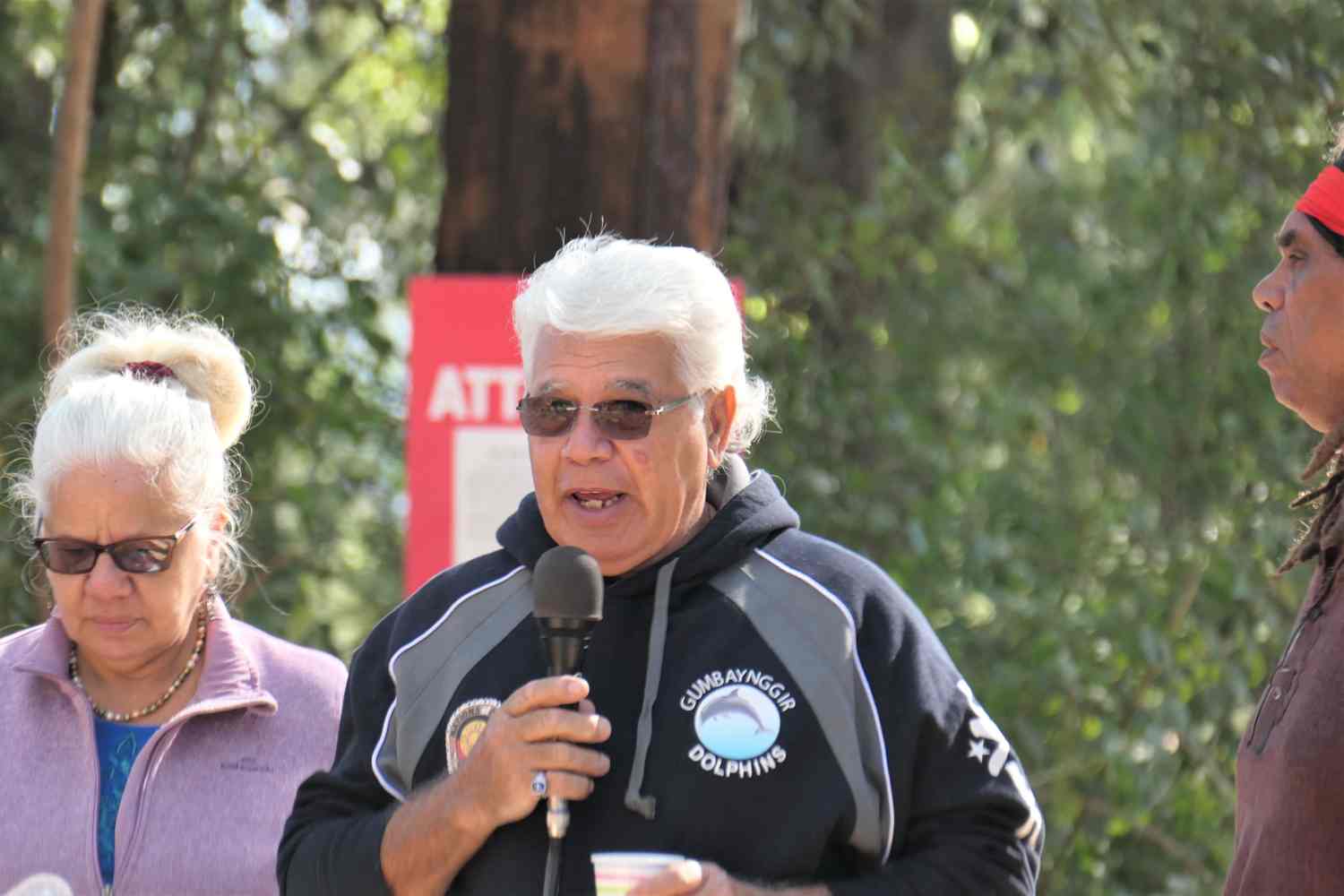 Uncle Micklo said, ‘I would like to thanks everyone who has come here today for helping us to look after our homeland, mother earth.’ 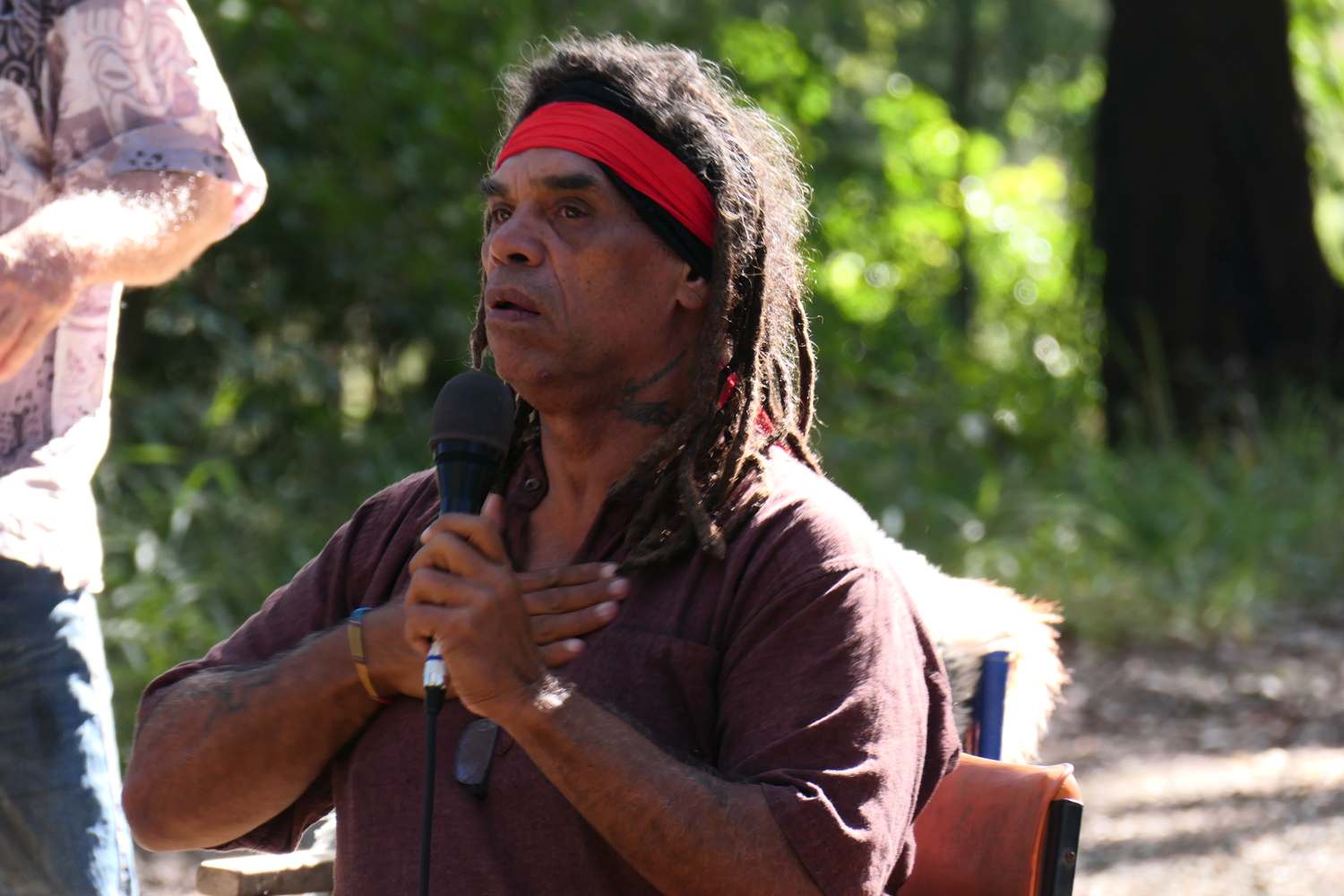 David Shoebridge was introduced and given the Gumbaynggirr dictionary and songbook. 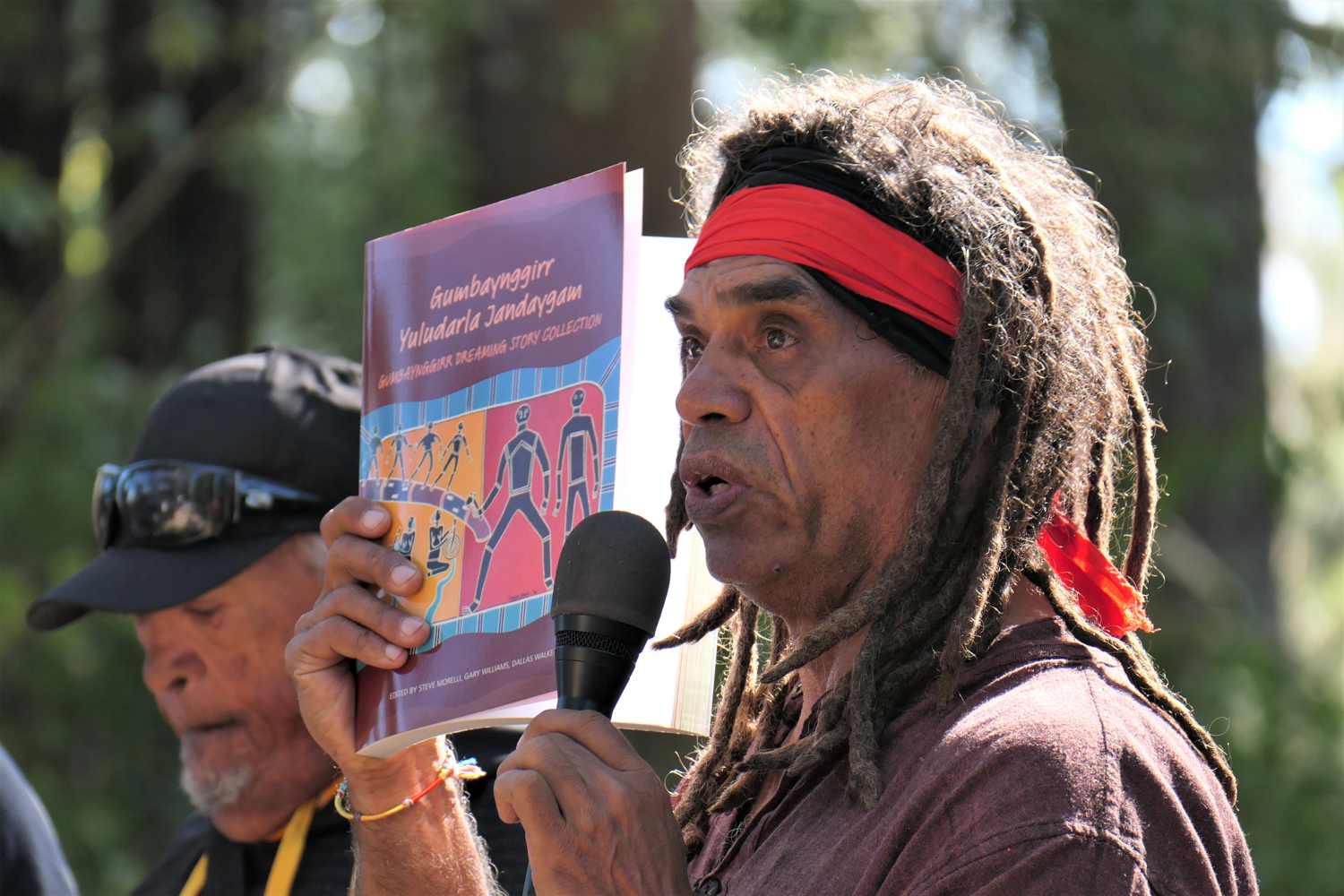 He and spoke about this protest being watched around Australia and the importance of preserving both cultural heritage and biodiversity and habitat. He is a Greens member of the Legislative Council and spokesperson for Forestry, among other things. 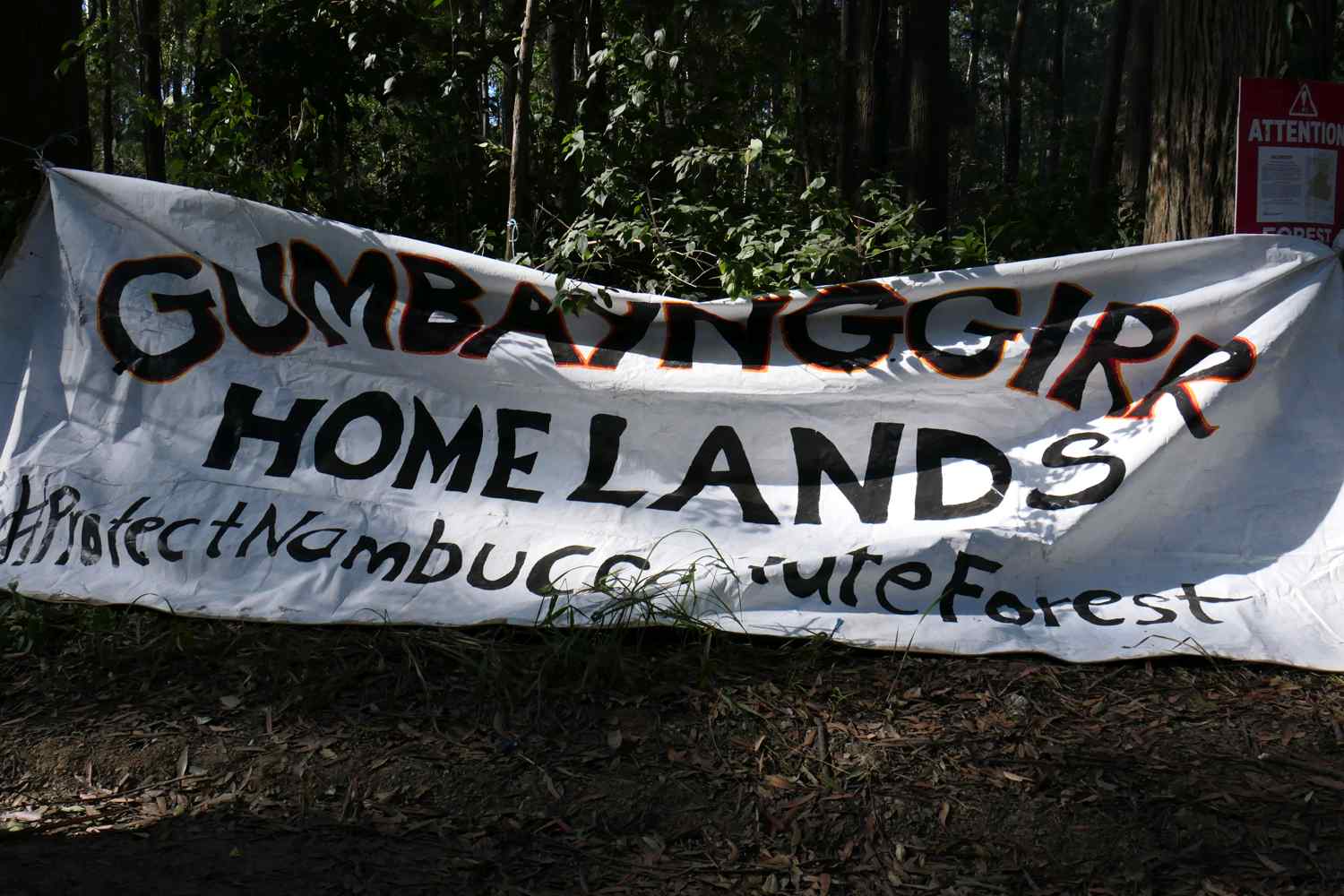 Then we formed two lines (physically distanced), men and women and were blessed with gum leaves, and smoke form a small burning torch. 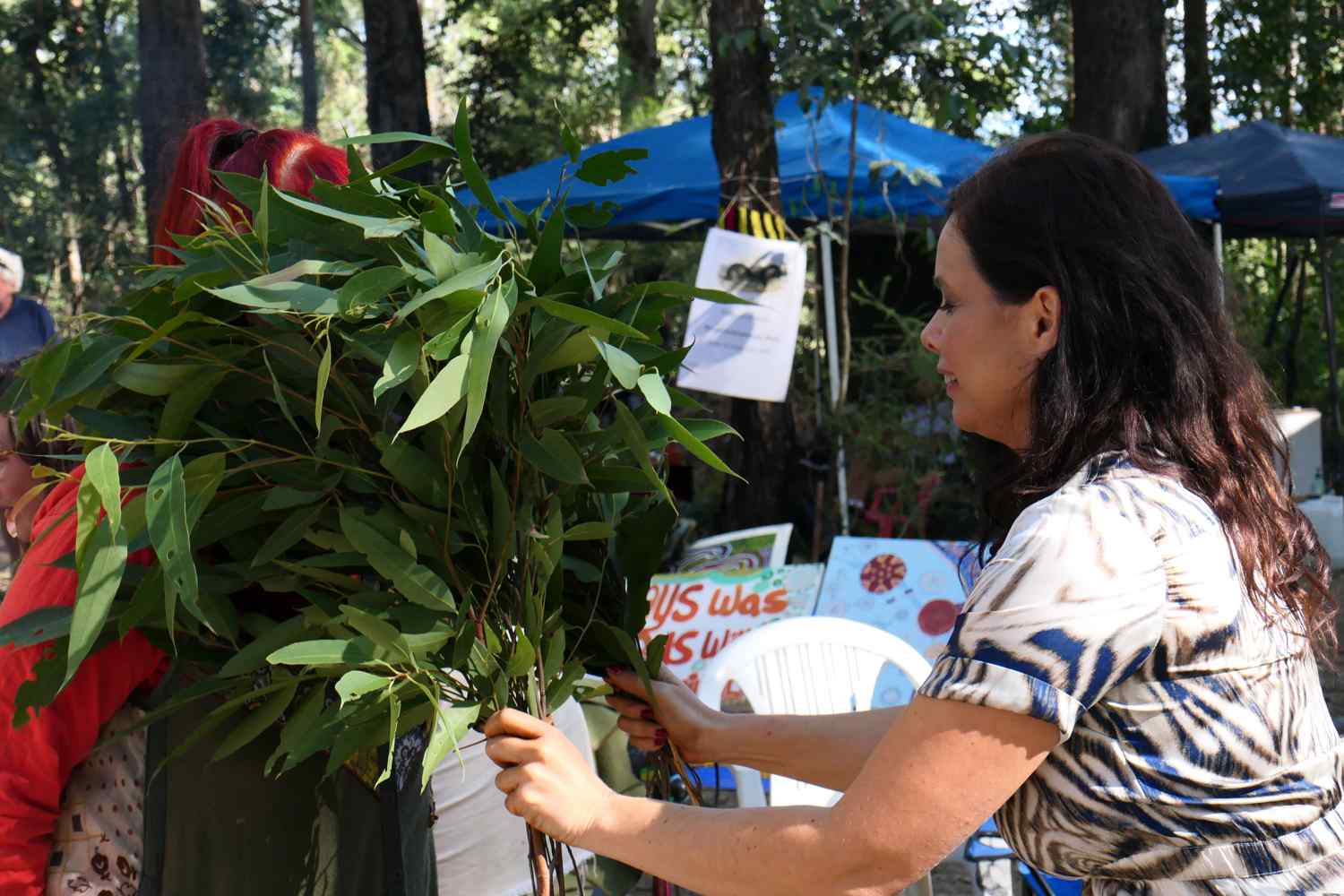 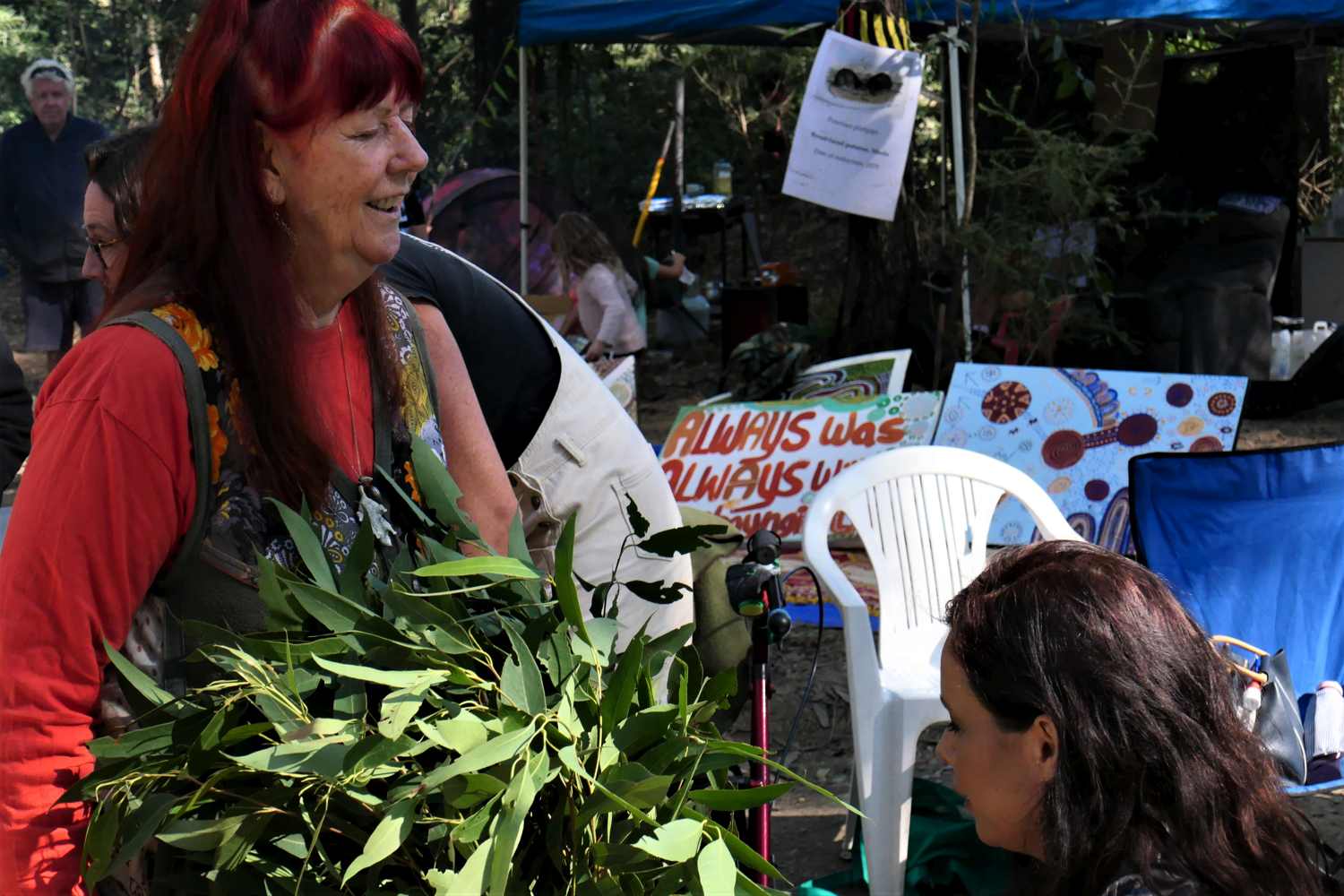 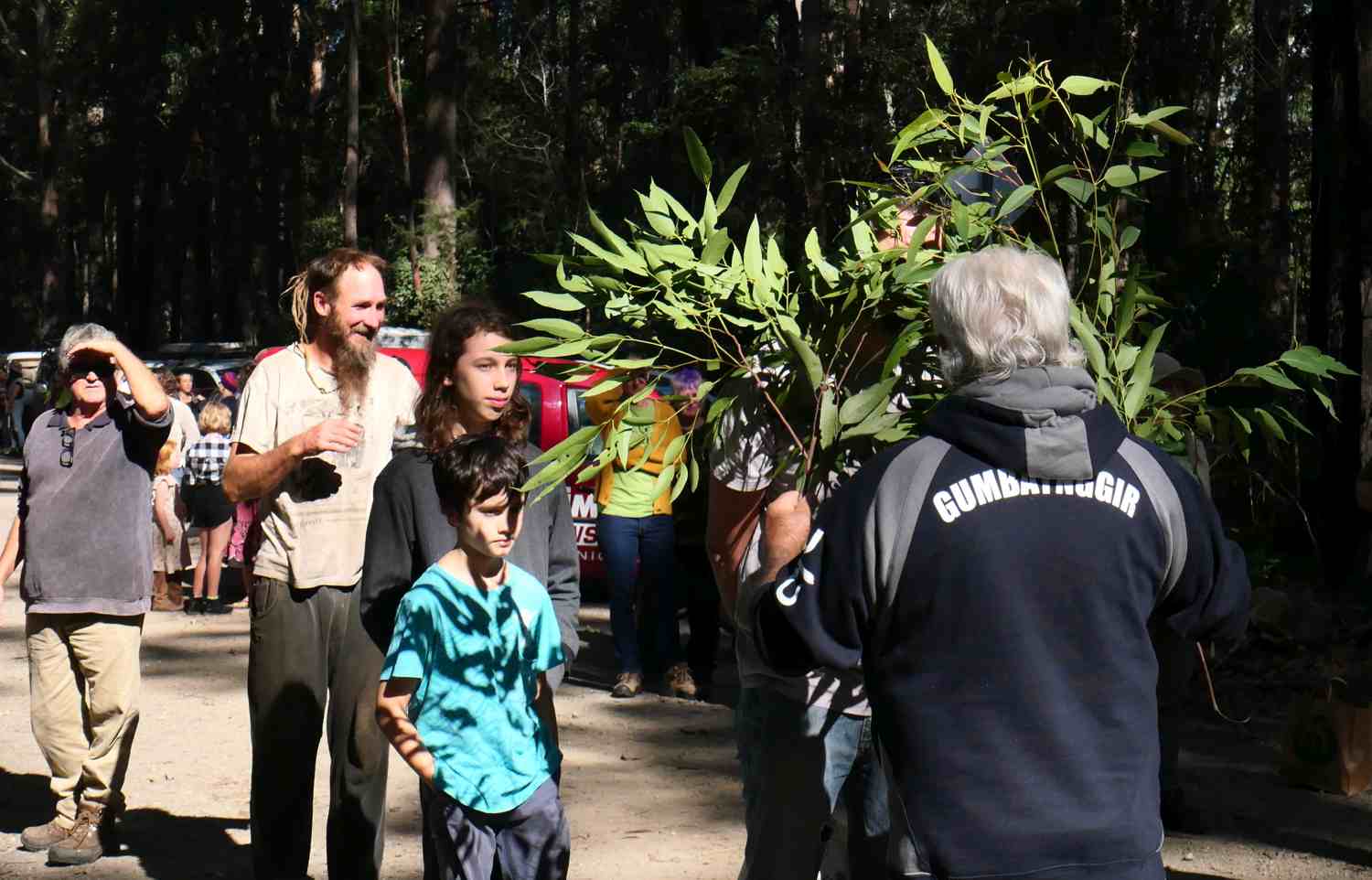 We followed the elders up into the forest. 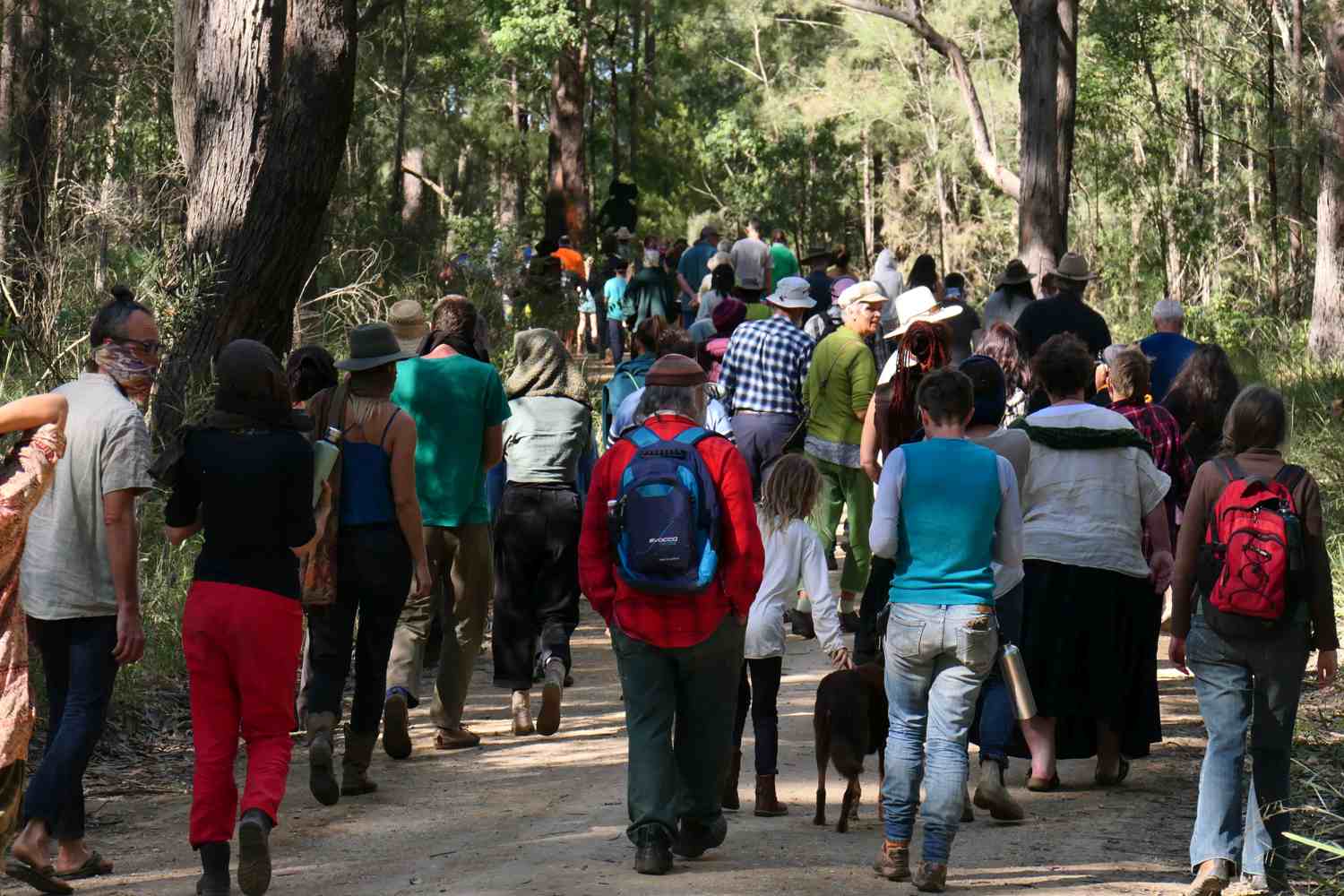 I was watching the old stumps and fresh stumps as we passed. 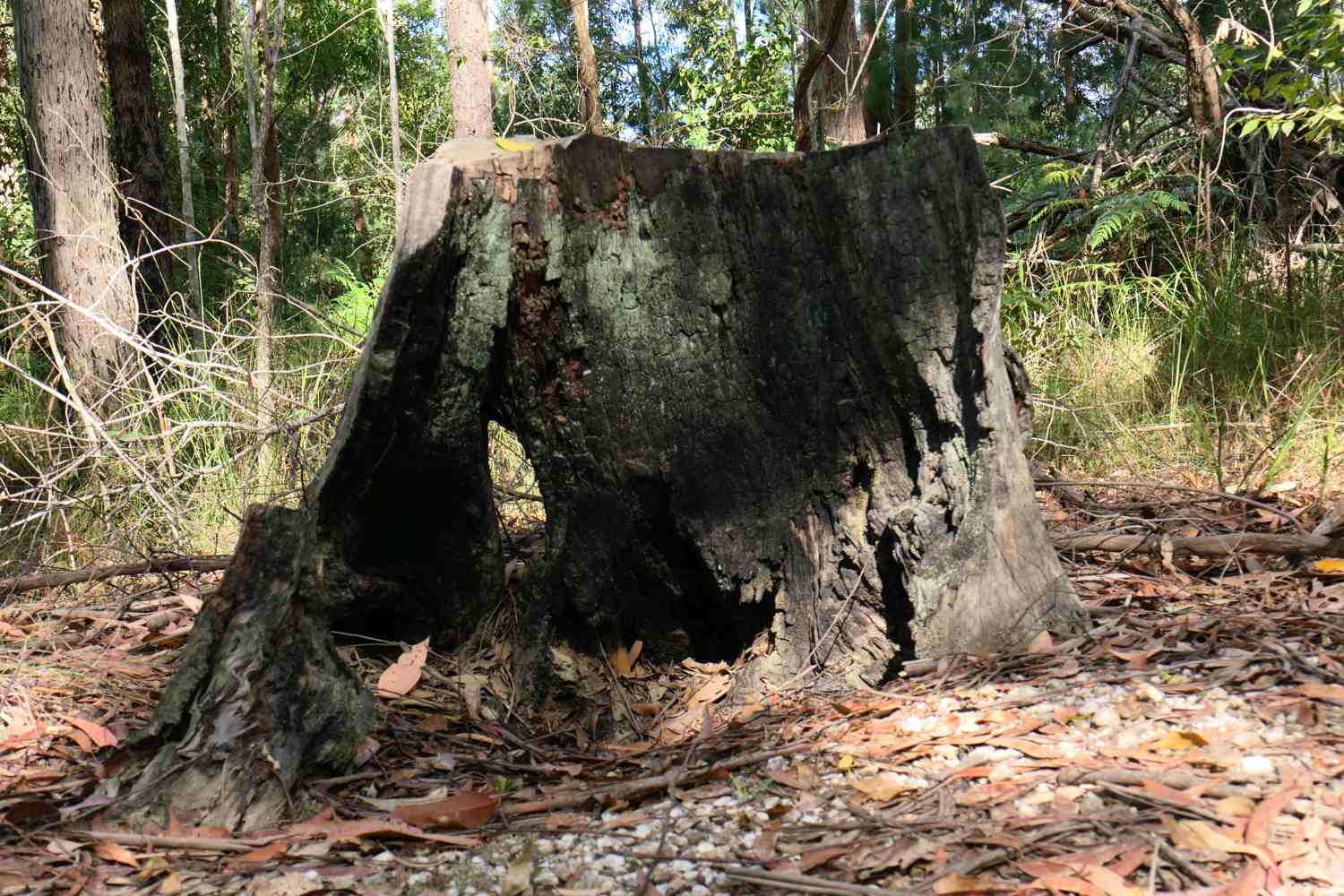 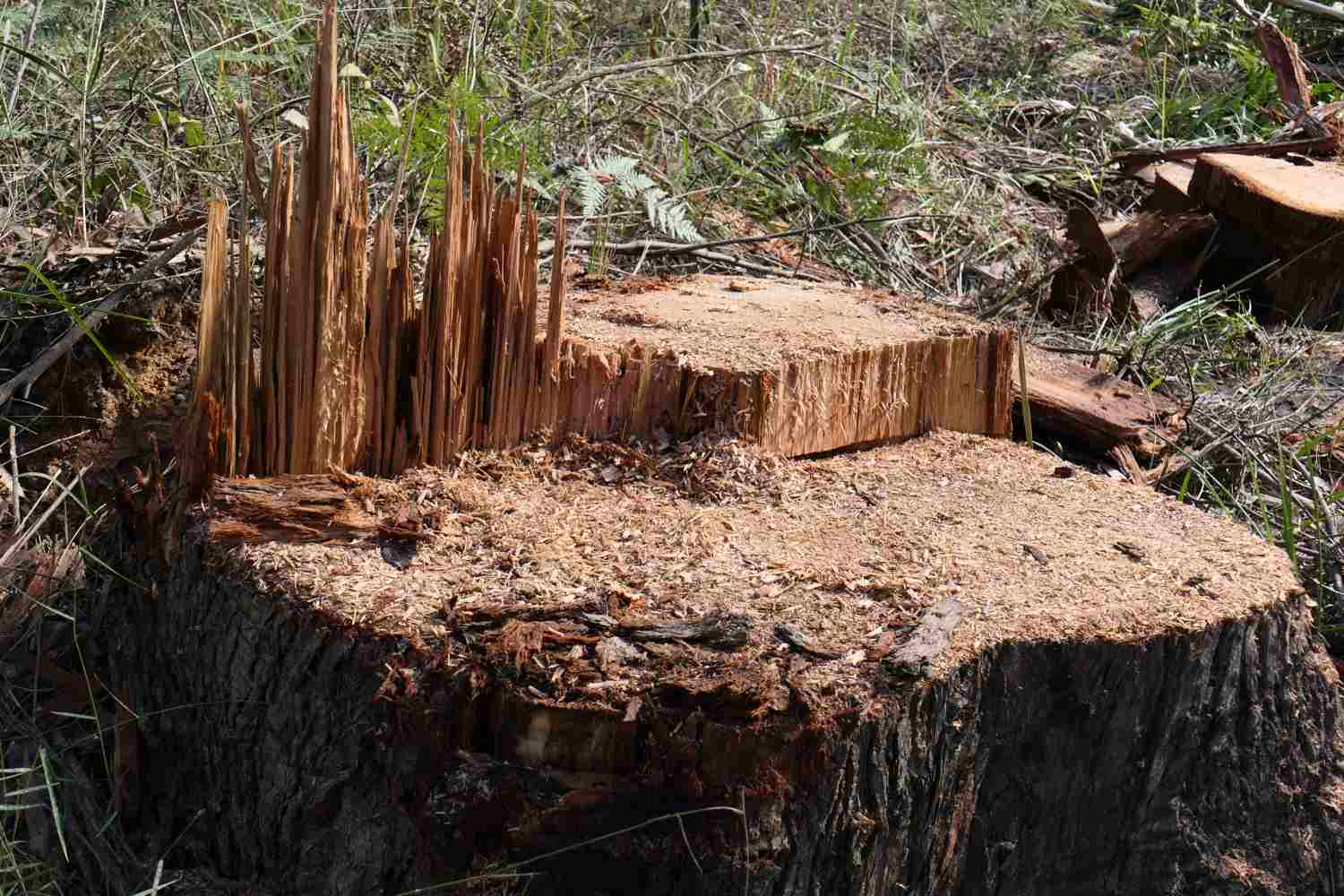 I was listening to a Brown Honeyeater and some White-browed Scrubwrens  when they were drowned out by a drone overhead documenting the protest. 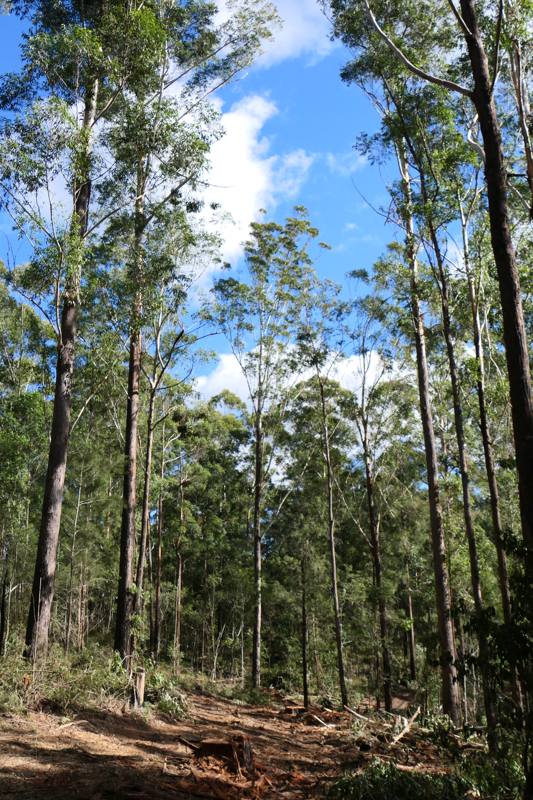 At the site of the last demonstration, there were no logs, this time plenty of logs waiting for trucks. 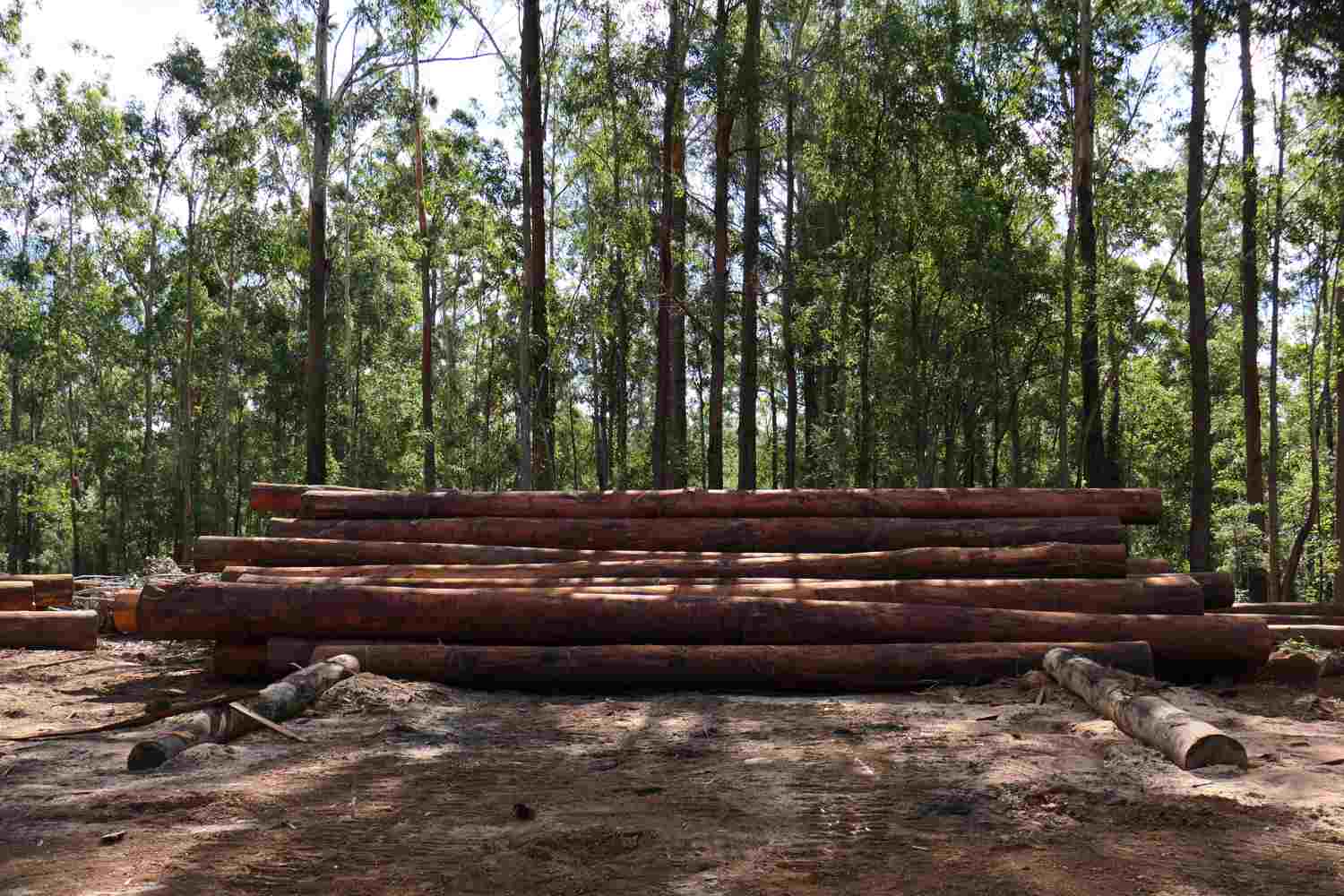 An elder Auntie Lauren Jarrett upset by seeing the logging. 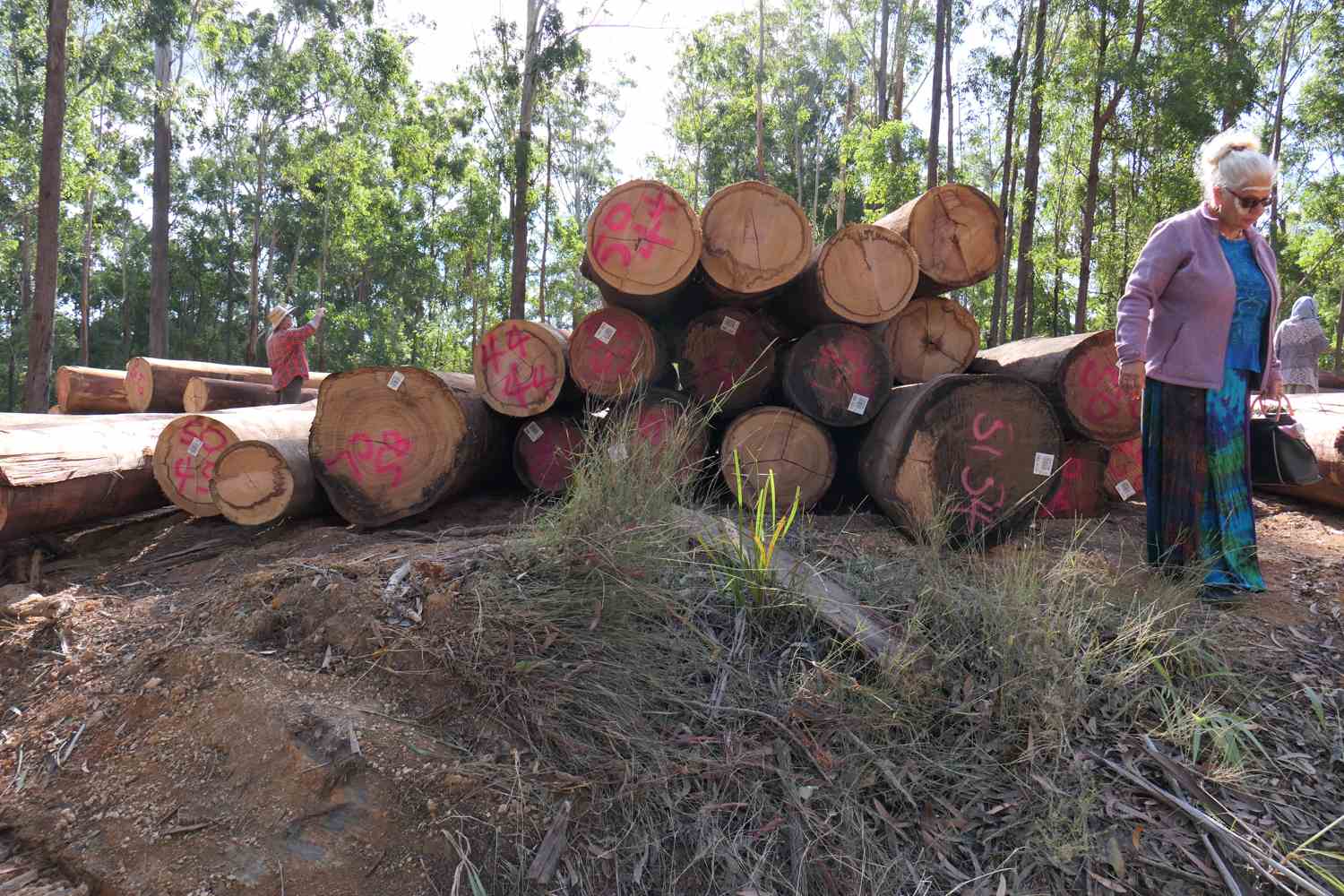 David Shoebridge addressed the crowd saying how important this fight was – the first time that the courts have stopped logging. Lawyers are working on the case pro bono. This is an important time for the future of our forests and biodiversity. 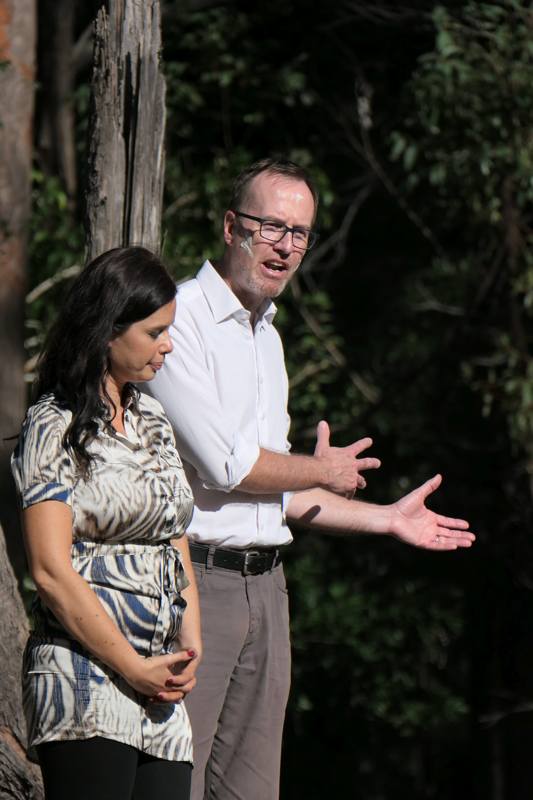 Sandy Jarrett Greenwood, the Gumbaynggirr camp spokesperson, addressed us with such passion and positive optimism. 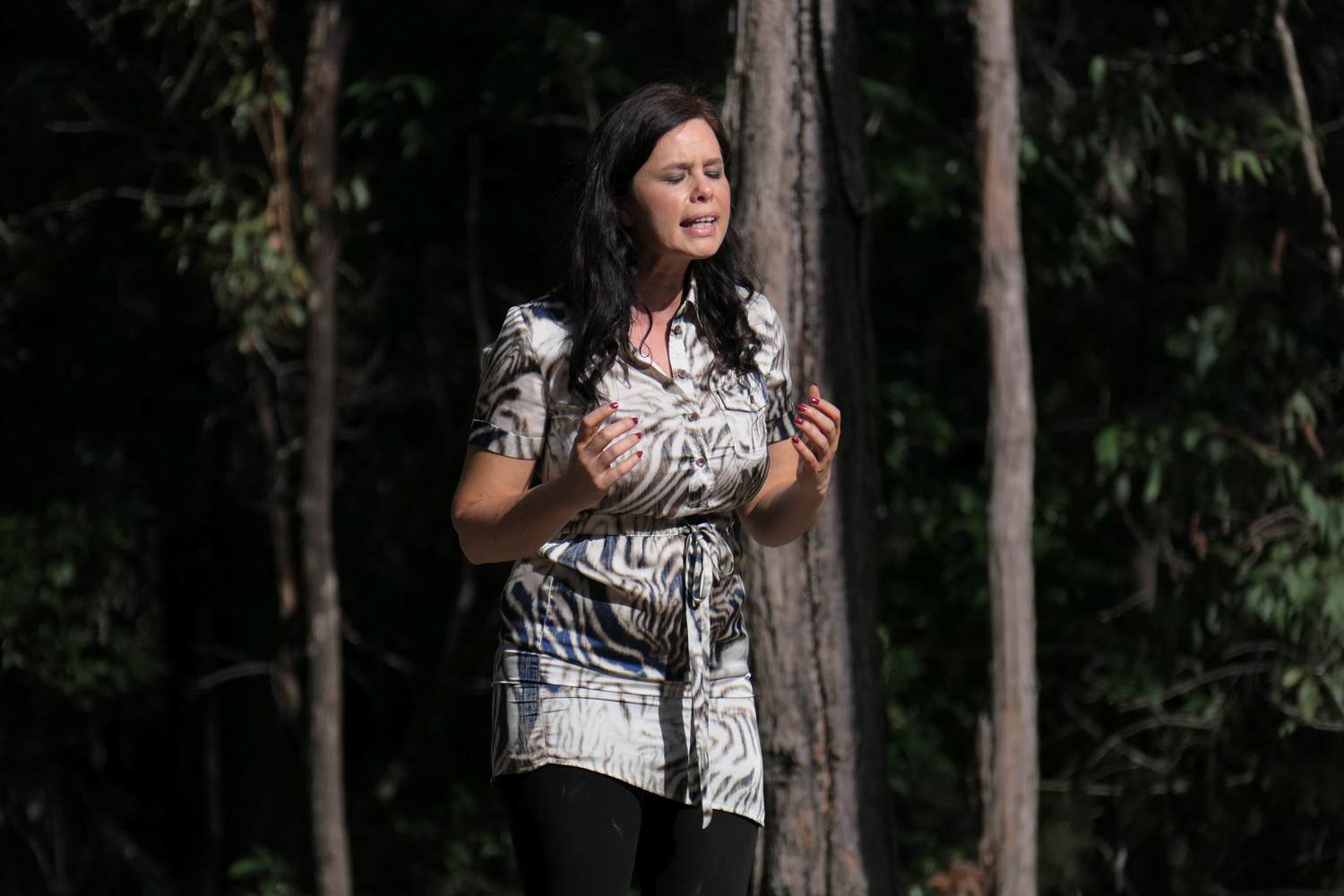 Finally Ashley Love spoke. He is a leader of the fight for a Great Koala National Park and who I came across when we both worked at National Parks. He outlined three breaches already committed by forestry in the last week here and noted the discovery yesterday of an endangered orchid that might halt logging. 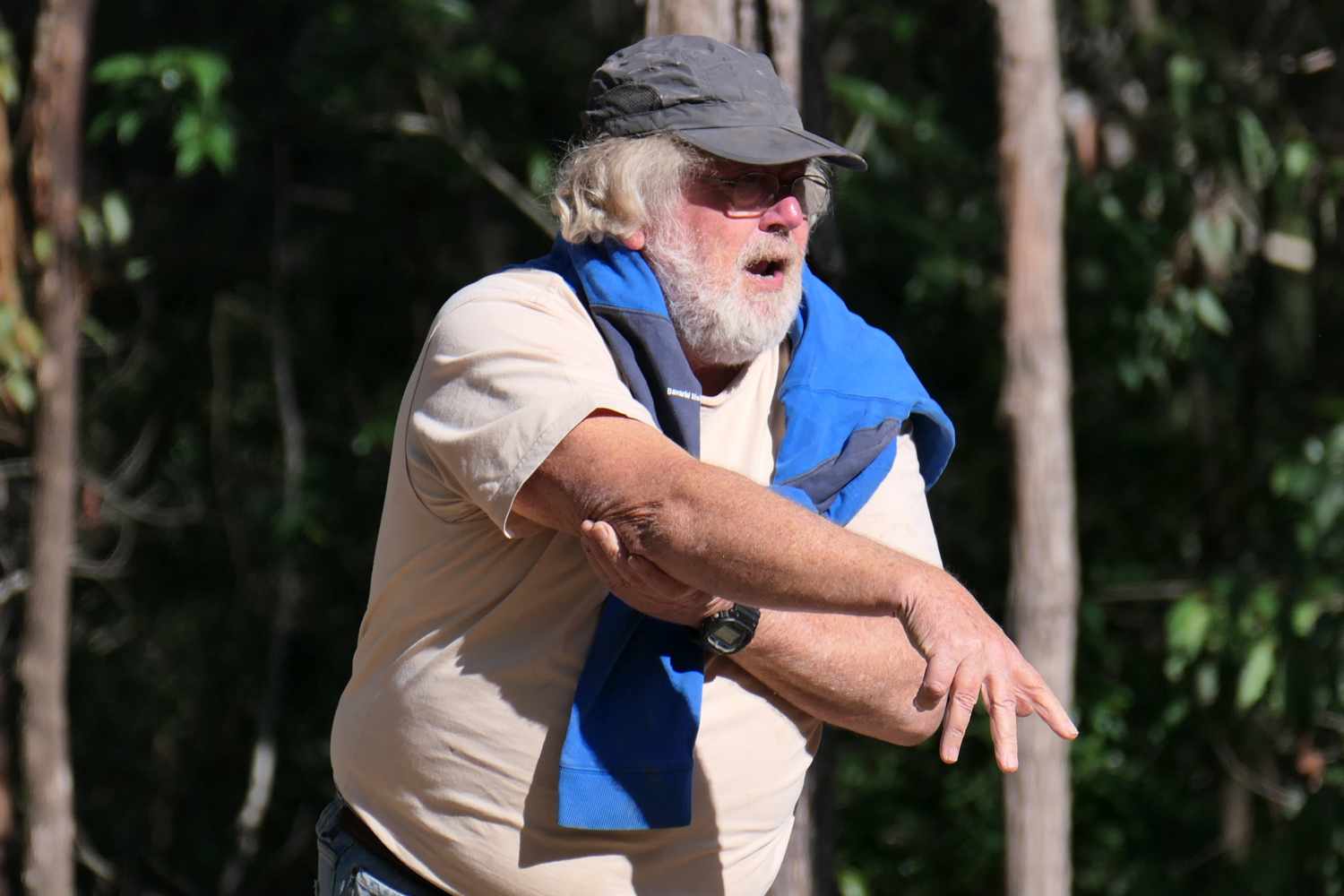 The NSW Environment Protection Authority (EPA) claims to regulate, ‘compliance of native forestry on both private and public land to protect the environment and ensure logging operations are sustainable.’ 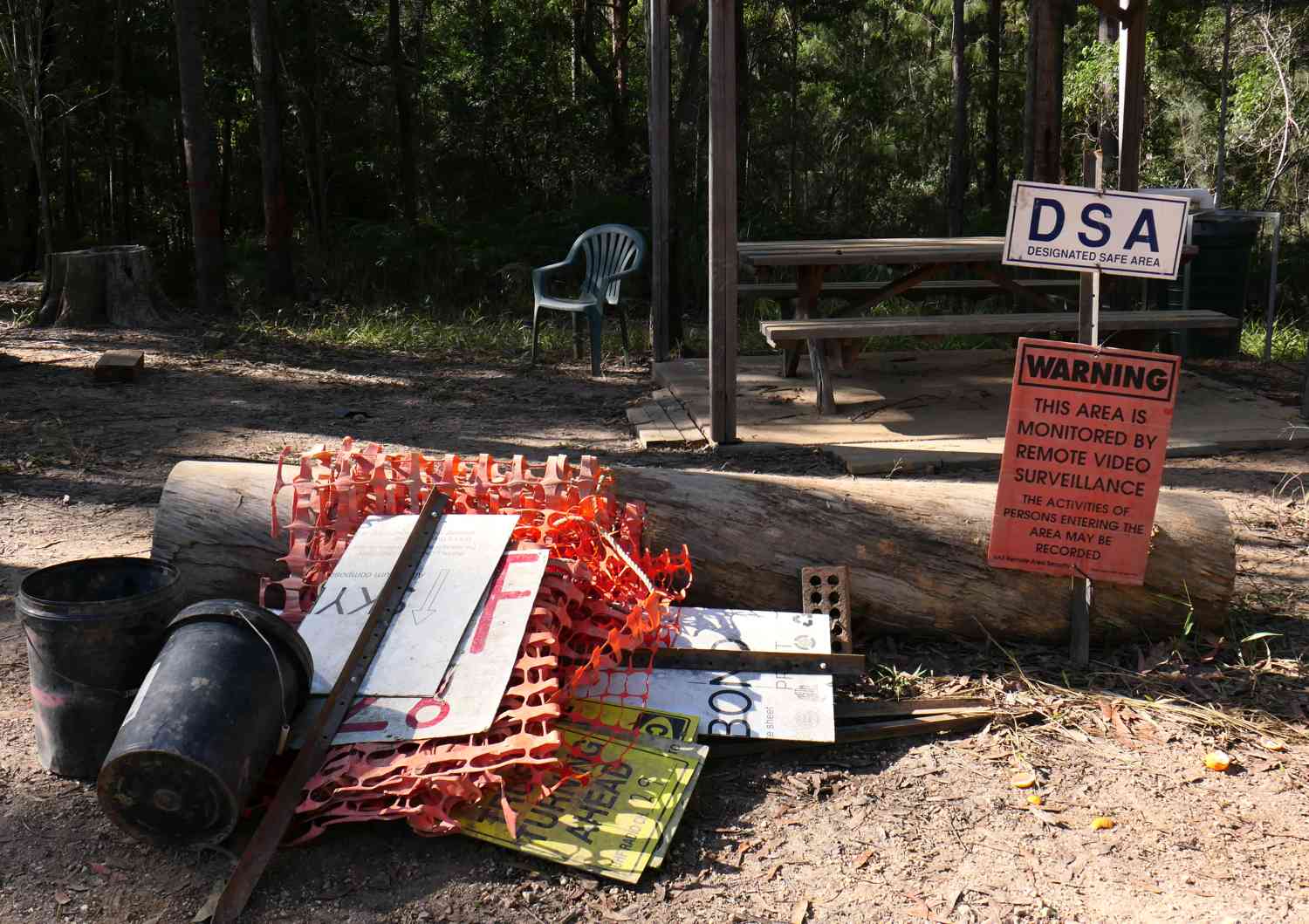 I have heard of countless beaches of conditions for logging, that rarely get investigated or taken further, that I despair. 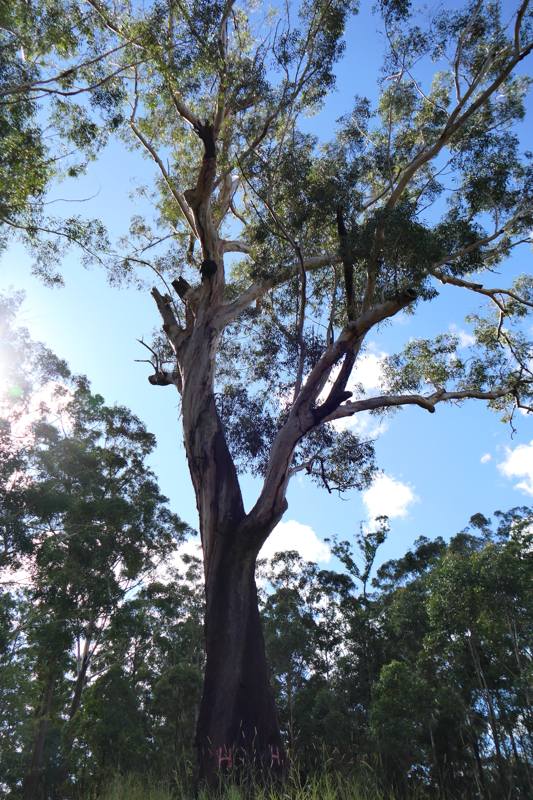 The largest tree I could see is a large Blackbutt, not a valuable timber for forestry.
A Prickly Moses wattle is in flower. 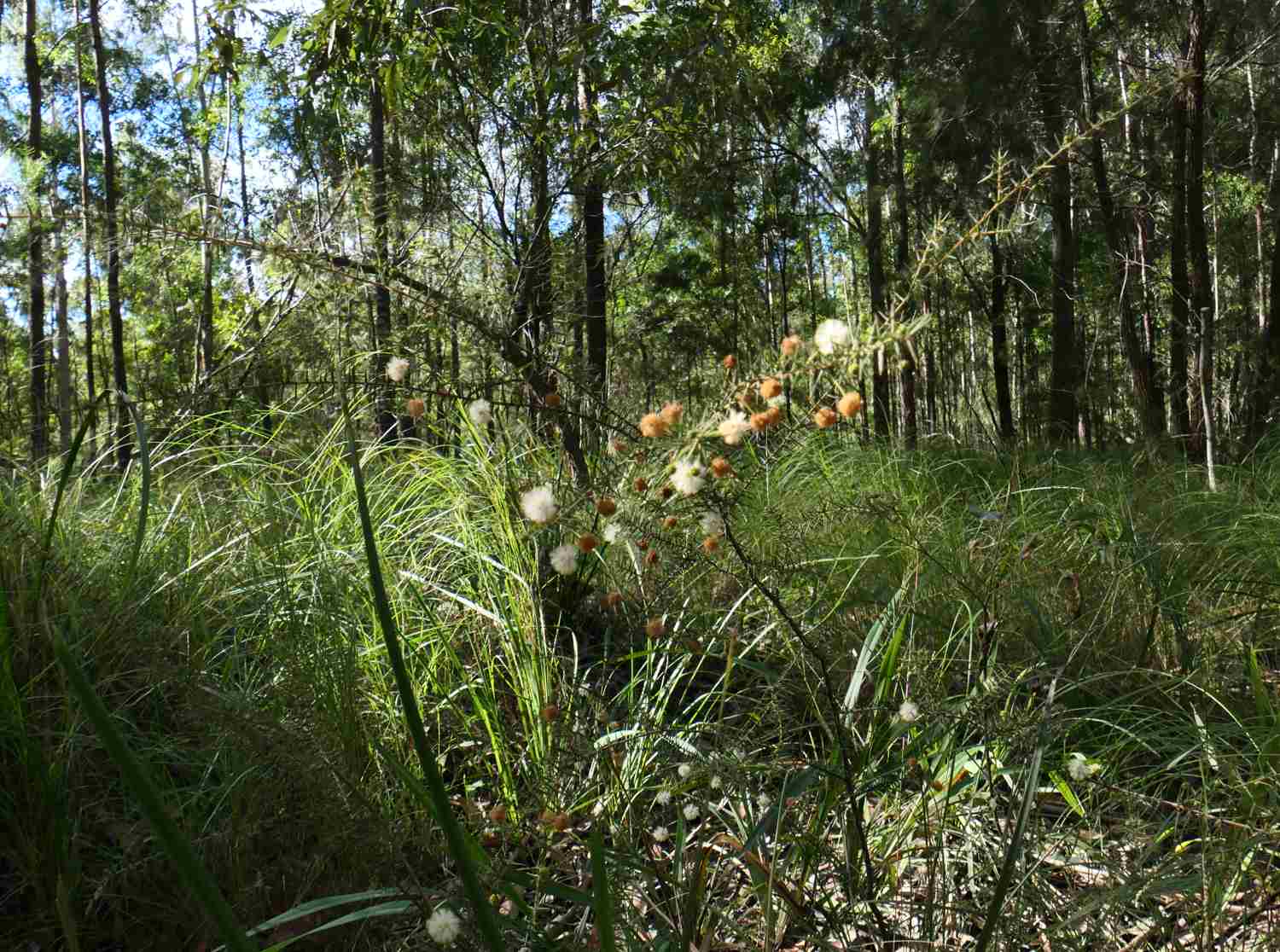 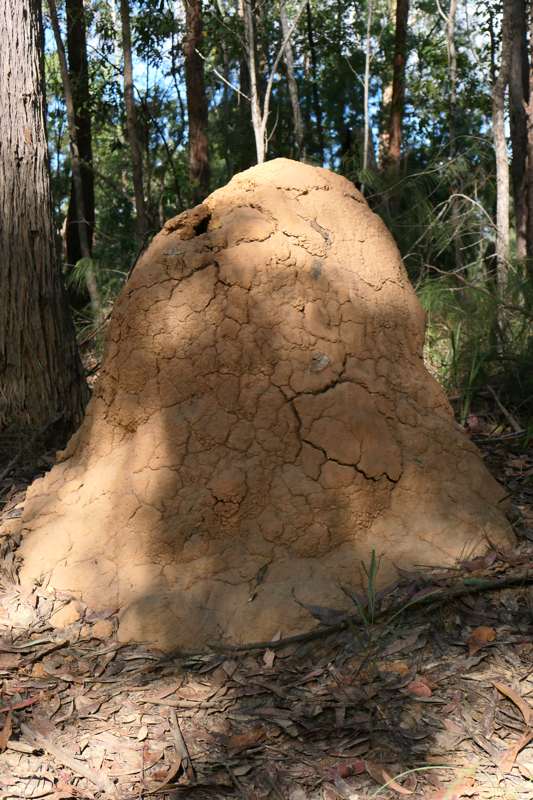 Termite mounds hint at the vast underground world. And so much is hidden here, how the elders were treated when they were young, the old songlines.

This gathering, protest, plea, argument, love, is part of what Thomas Berry called ‘the Great Work’:

The Great Work now, as we move into a new millennium, is to carry out the transition from a period of human devastation of the Earth to a period when humans would be present to the planet in a mutually beneficial manner. [1]

The elders were telling us to listen to the forest. Thomas Berry (a scholar of religions) has an indigenous sensibility: ‘We become sacred by our participation in this more sublime dimension of the world about us.’ [3] 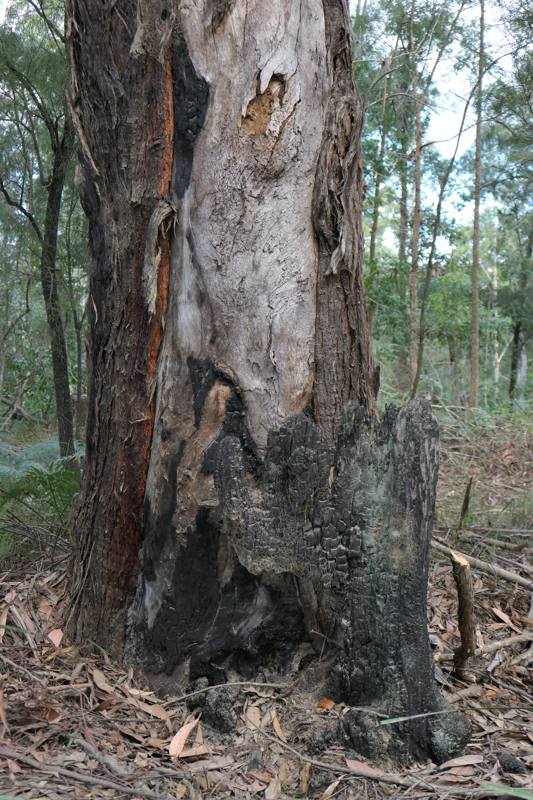 On the return I fell in step with Uncle Buddy Marshall. His pregnant mother walked across the mountains to Bellingen Hospital to give birth. Macksville and Bowraville Hospitals wouldn’t treat ‘blacks’. He walks with a stick now but he told me it took three and a half months walking to Sydney for the ‘People’s Walk for Reconciliation’ on. It was worth it, he said. More than 300,000 Indigenous and non-Indigenous and people crossed the Sydney Harbour Bridge on the 28th of May 2000 in support of Indigenous Australians and reconciliation.

Earlier I had been blessed (with gum leaves) by Uncle Ralph, who Uncle Buddy said, was a stolen generation child, brought up in Kinchela. [4] The boys were known by a number not their names. ‘Unbelievably, Aboriginal child removals were a police matter. It was standard procedure to charge children — babies included — with the offence of being a neglected child. In the harsh eyes of the law, these innocent children were, to all intents and purposes, criminals.’ [5] It was a cruel place, for one misdemeanour Uncle Ralph had to swim across the river, was whipped on the other side, had to swim back was whipped again, there was blood in the water.

A group of forestry and climate scientists are calling for an immediate and permanent end to the logging of all native forests across Australia as part of a response to climate change and the country’s bushfire crisis. [7]

On the way back I wanted to say hello to the Nambucca River. 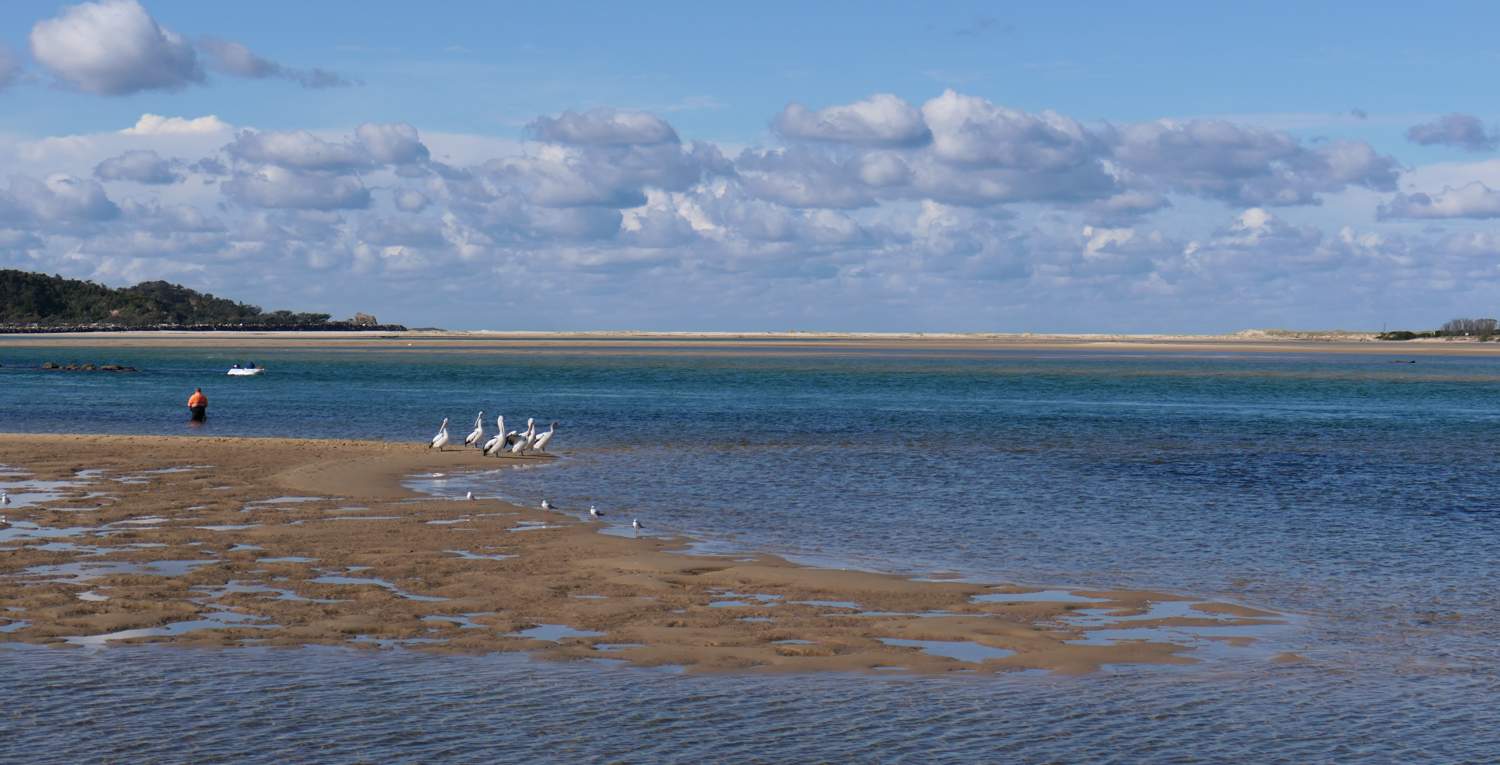 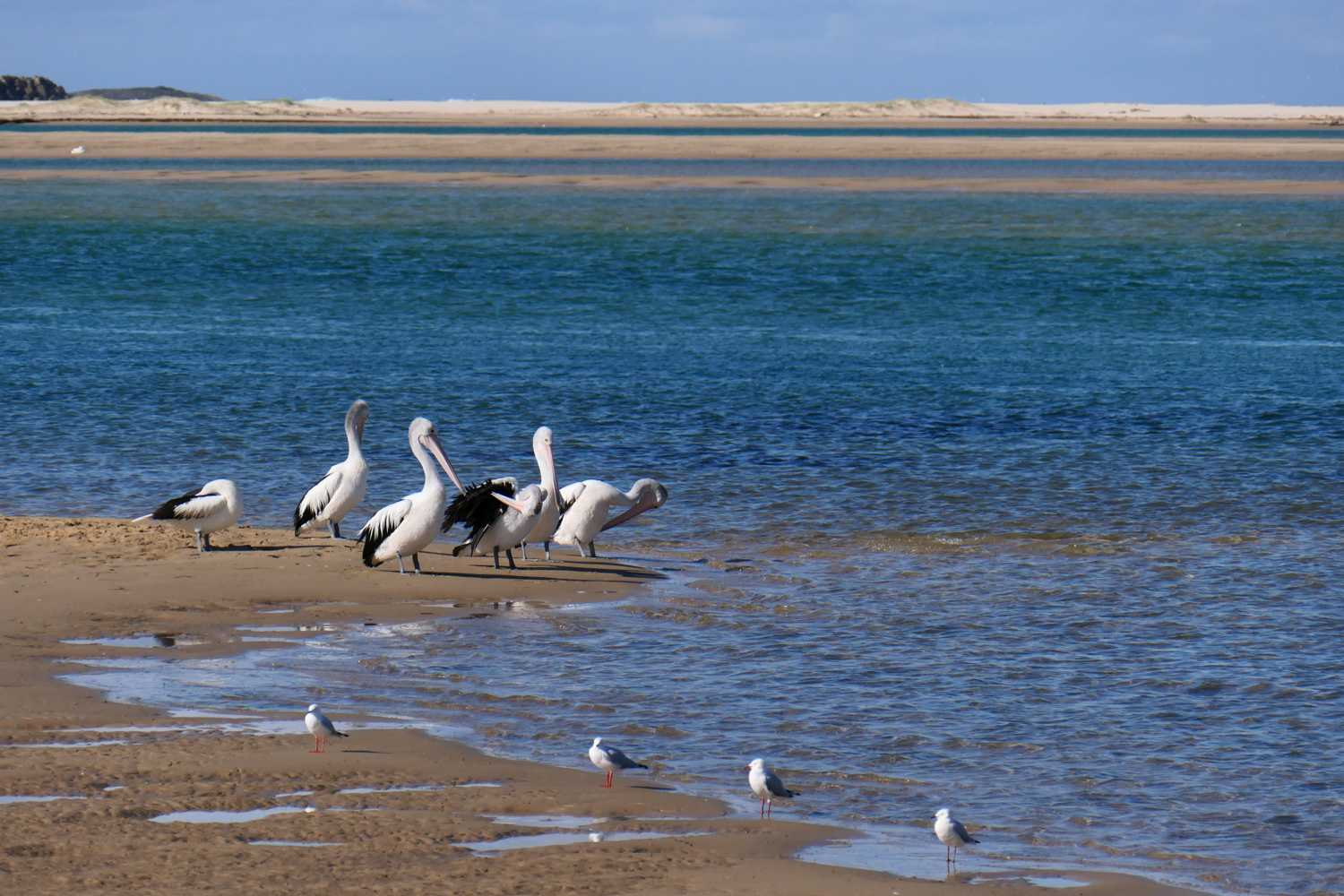 Went shopping, a beggar asked for 50 cents I said we all use cards now, but looked in my wallet found a $2 coin which I gave. He thanked me about three times. No no, I tried to stop him, no worries, look after yourself. Went and got $67 dollars worth of groceries, chatted away to the checkout man. As I gathered up my three bags, I heard/ That will be $1.50. I noticed who was behind me. There was fifty cents change. I was incensed. Not that I expected him to spend his $2 on apples or vegetables, but because he had wasted my money. There were snickers on special, he could have bought smaller ones, much better value. My parsimonious nature!

I watched the local news for any reports of the action. Uncle Roger says, ‘This is part of the songline we walked on.’

I felt uplifted having experience the deep emotion, passion love for bush and country, having talked to committed people, having been out in the forest (very different to our coastal forest, Jagun).

When you really immerse yourself in the natural world, no matter how many bird guides or explanations you’ve got about what it is you’re seeing, you’re going to be overwhelmed. And the message is, step into it. Don’t try to define nature. It is not definable or controllable. One of life’s great ecstasies is to step into it. Barry Lopez [8]

Our disciplined knowledge offers insights into the larger wonderful story of life, which Thomas Berry warns we have lost contact with.[9]

We have just lost:
27% of NSW NPWS estate.
54% of Gondwana rainforests of Aus World Heritage Area in NSW.
52% of heathlands in NSW.
25% of suitable koala habitat in eastern NSW.
The report should have addressed the implications of these losses. There was no mention of logging or forestry, obviously outside their terms of reference.

The NSW Forestry Corporation have been given the permission to log 140,000 hectares of coastal forests from Taree to Grafton which they refer to as ‘intensive harvesting zones’. If we don’t act now our deeply significant cultural heritage will be desecrated, our beautiful old growth trees will be logged, rare flora will become extinct and our koalas and endangered species will literally have nowhere else to go.

I would like to see the Nambucca State Forest made into a national Cultural Heritage Park sustaining our ancient culture and natural habitats for future generations and creating culturally empowering and environmentally sustainable jobs. Sandy Greenwood Jarret, Gumbaynggirr camp spokesperson.[11]

Thinking of that lonely Blackbutt I thought of Richard Powers in the Santa Cruz mountains near San Francisco:

Walking through this second-growth forest one day, I came across a tree that had somehow, by the accident of history, escaped the loggers that had clear-cut these mountains . . . there I was, standing in front of a tree that was the width of a good-sized house, and a football field in height, and almost as old as the Roman Empire. A number of things came clear to me in that moment.

And it’s the journey to understand trees, for sure—to see this huge taxonomic category that is so instrumental in transforming the world—but it’s also a journey to reappraise what the human is and to tell the human story in a more complete, robust, and honest way. How deeply dependent we have been upon these communities of other creatures that we have been tempted to treat as mere commodities. Richard Powers[12] 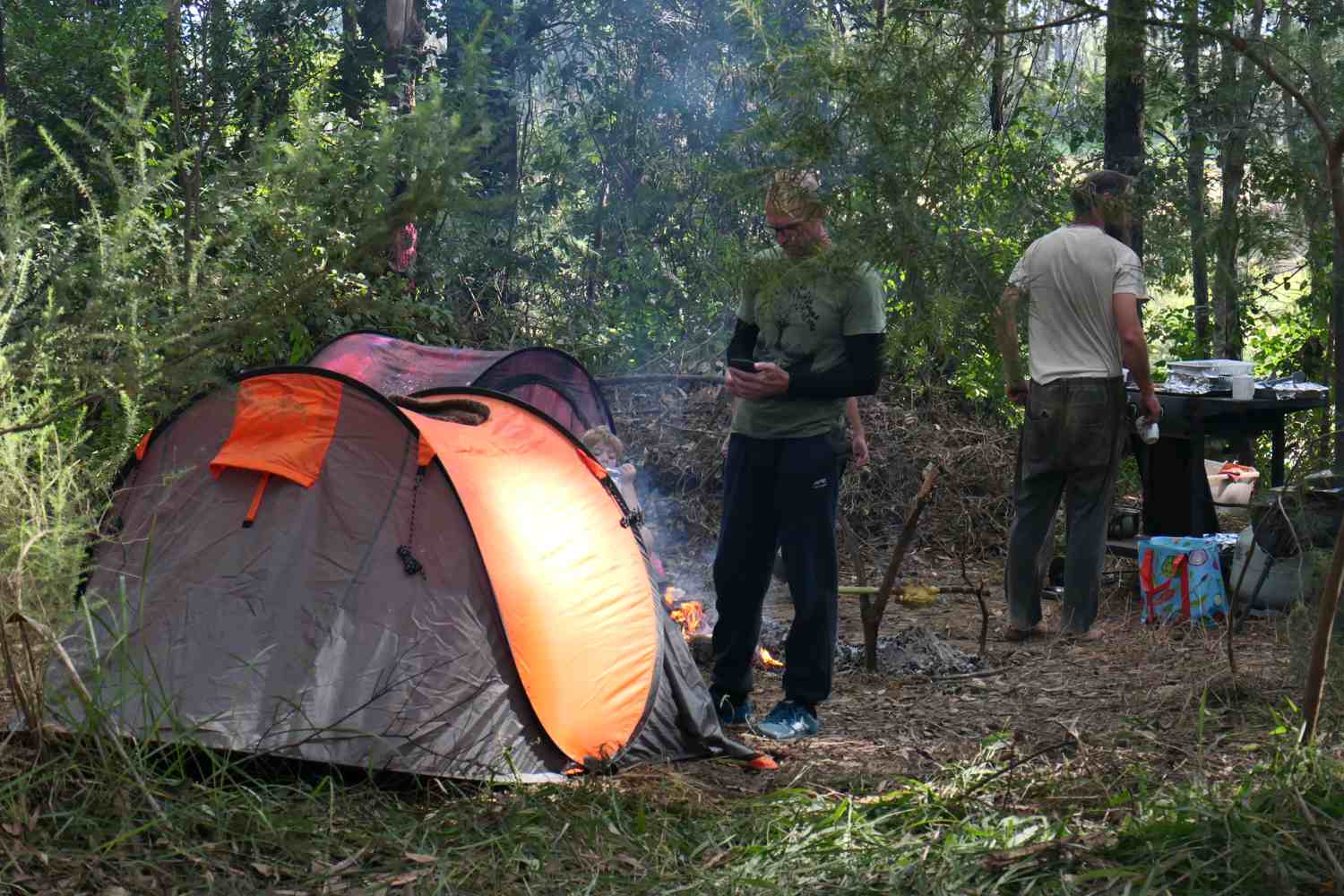 And then I thought of the campers staying out there – cold at night and rain forecast all week from tonight, and I thought of Richard Powers’ novel The Overstory about activism.

Powers has said that he was “trying to resurrect a very old form of tree-consciousness, a religion of attention and accommodation … that credits other forms of life – indeed, the life-process as a whole – with wanting something”. Some of the book’s finest scenes occur “two hundred feet above the surface of the planet”, in the crown of a California giant redwood nicknamed “Mimas”. Living up in the canopy for weeks, the protesters trying to prevent Mimas’s logging come to know the tree as a living community, a sky city. Animism is the driving force of their activism; a belief in the rights of more-than-human beings ‘to exist, flourish, and naturally evolve’. Robert Macfarlane

[On flourishing as a human goal see The bio/cultural diversity of the bricoleur.]

[4] Aboriginal Boys Training Home (KBH) was a ‘home’ run by the NSW Government for over 50 years from 1924 – 1970 at Gladstone, south of here. ‘This was a place where physical hardship, punishment, cruelty, alienation and abuse (cultural, physical, psychological and sexual) are documented as having been part of the day-to-day life endured by boys who were kept and made to work there. Upon ‘leaving’ Kinchela Boys Home, the boys’ troubles did not end there. Institutionalisation and the legacies of their treatment have resulted in ongoing pain and trauma for survivors, their families and communities.’ https://kinchelaboyshome.org.au/kinchela-boys-home/history-of-kinchela-boys-home/

[6] A monthly magazine produced by the NSW Aborigines Welfare Board to promote its activities.

[9] ‘Such a marvel is this fifteen billion year process; such infinite numbers of stars in the heavens and living beings on Earth, such limitless variety of flowering species and forms of animal life, such tropical luxuriance, such magnificent scenery in the mountains, and such springtime wonders as occur each year. Now we are experiencing the pathos of witnessing the desecration of this sublimity. We now need to tell this story, meditate on it, and listen to it as it is told by every breeze that blows, by every cloud in the sky, by every mountain and river and woodland, and by the song of every cricket. We have lost contact with our story.’ Thomas Berry, ‘The Ecozoic Era: Eleventh Annual E. F. Schumacher Lectures,’ October 1991, http://www.schumachersociety.org/lec-tber.html.

[10] Biodiversity and landscape data and analyses to understand the effects of the fire events. DPIE Department of Planning, Industry and Environment, June 2020.