World Environment Day 2020: theme will be ‘Biodiversity’. The Mighty Earth

Two roos jump across the track. If only everyone could catch a moment of beauty or wonder, today of all days. The pandemic lockdown opens up unexpected time for those who are healthy, for those not too anxious or not now grieving.

Heraclitus might have lived here. The second lagoon has vanished overnight, mapping this place is a minute by minute exercise. 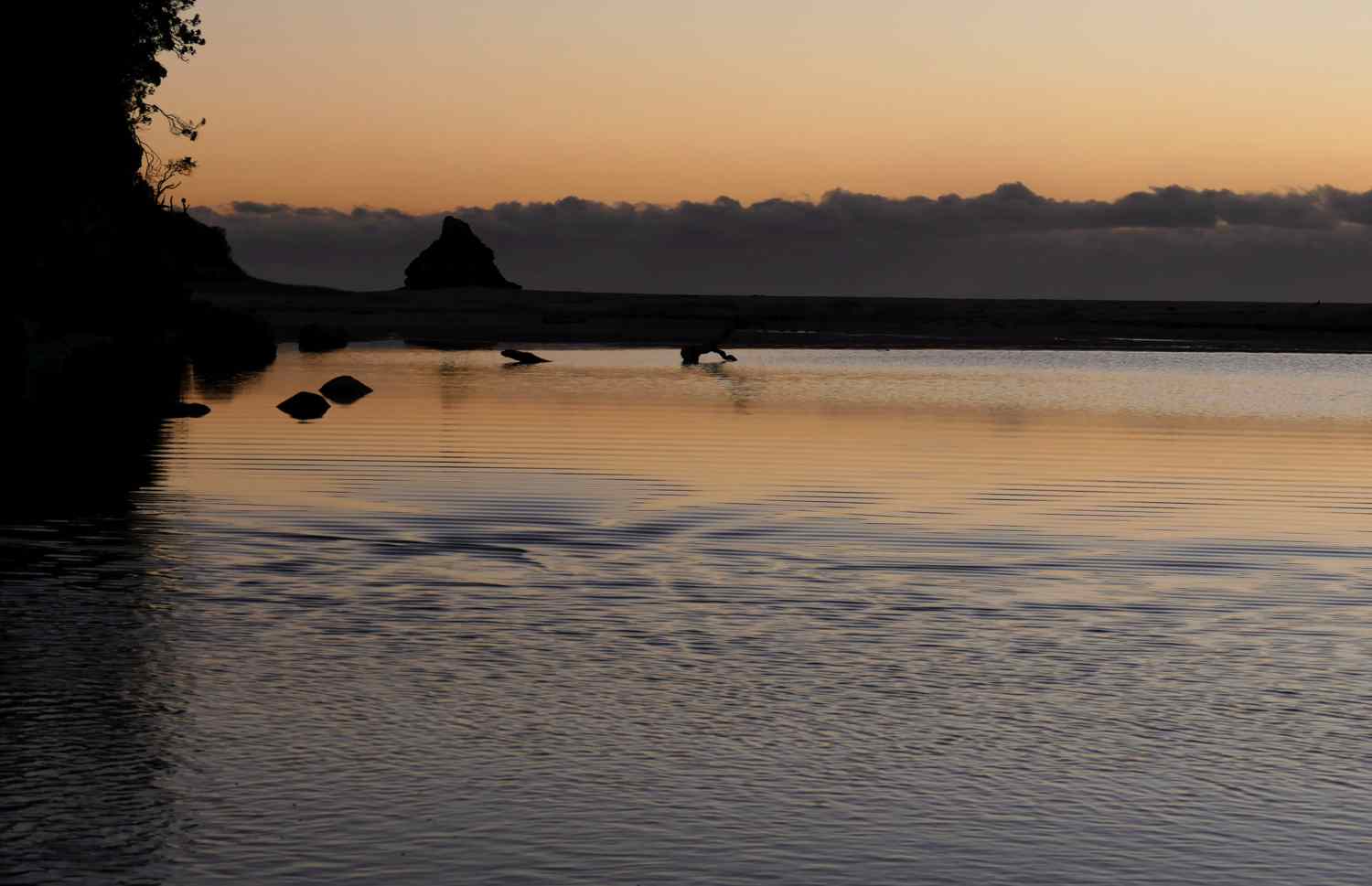 The first push into the mirrored lagoon arrives, a gentle licking. A squad of Little Black Cormorants recce then turn back into the pale grey-blue abbreviated ambience upriver.

I take simple delight in following the often interrupted trajectory of the ripples: Billions of years ago, soon after the Big Bang, cosmic inflation stretched the tiny seed of our universe and transformed energy into matter. Physicists think inflation initially created the same amount of matter and antimatter, which annihilate each other on contact. But then something happened that tipped the scales in favor of matter, allowing everything we can see and touch to come into existence — and a new study suggests that the explanation is hidden in very slight ripples in space-time. [1] 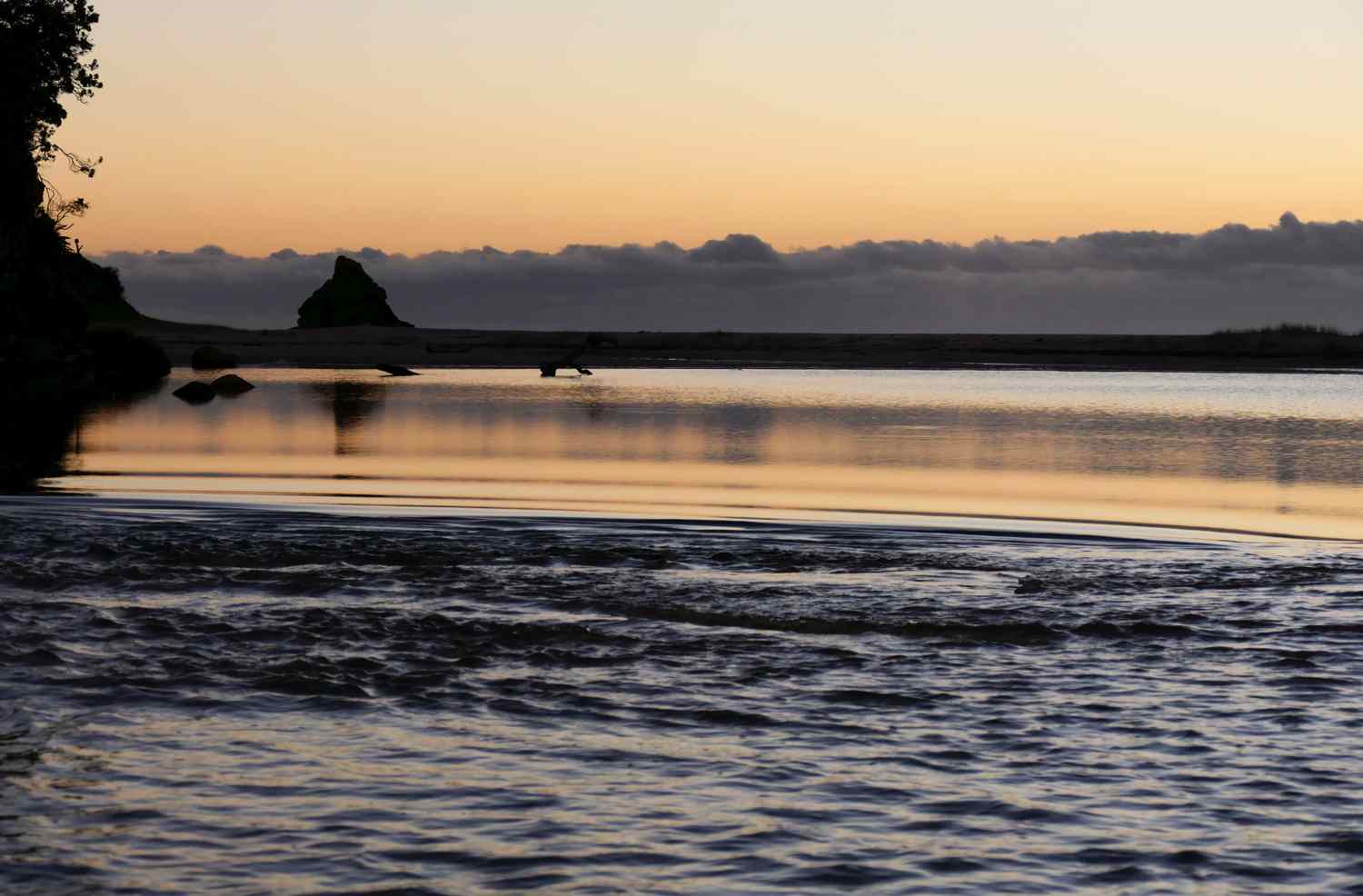 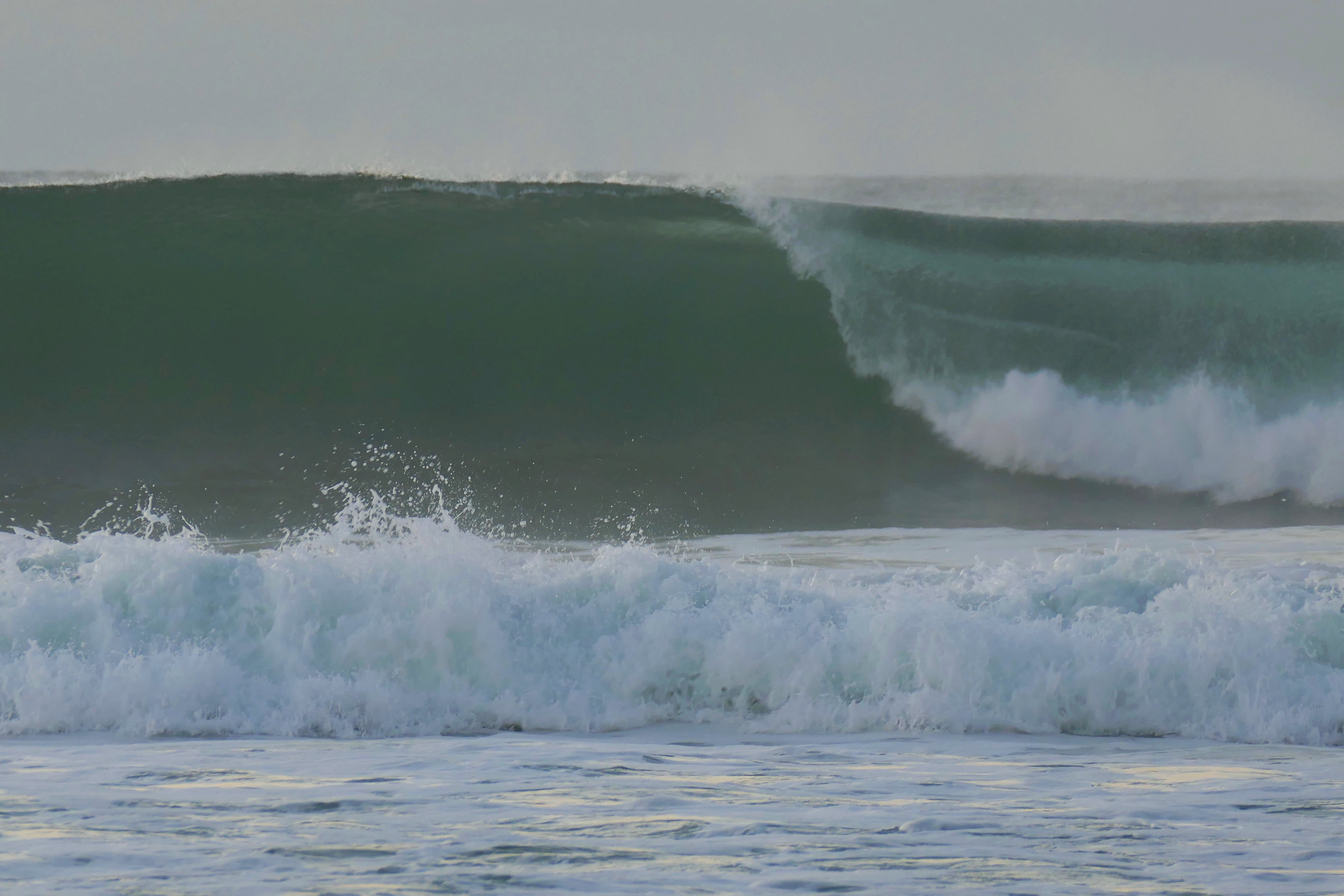 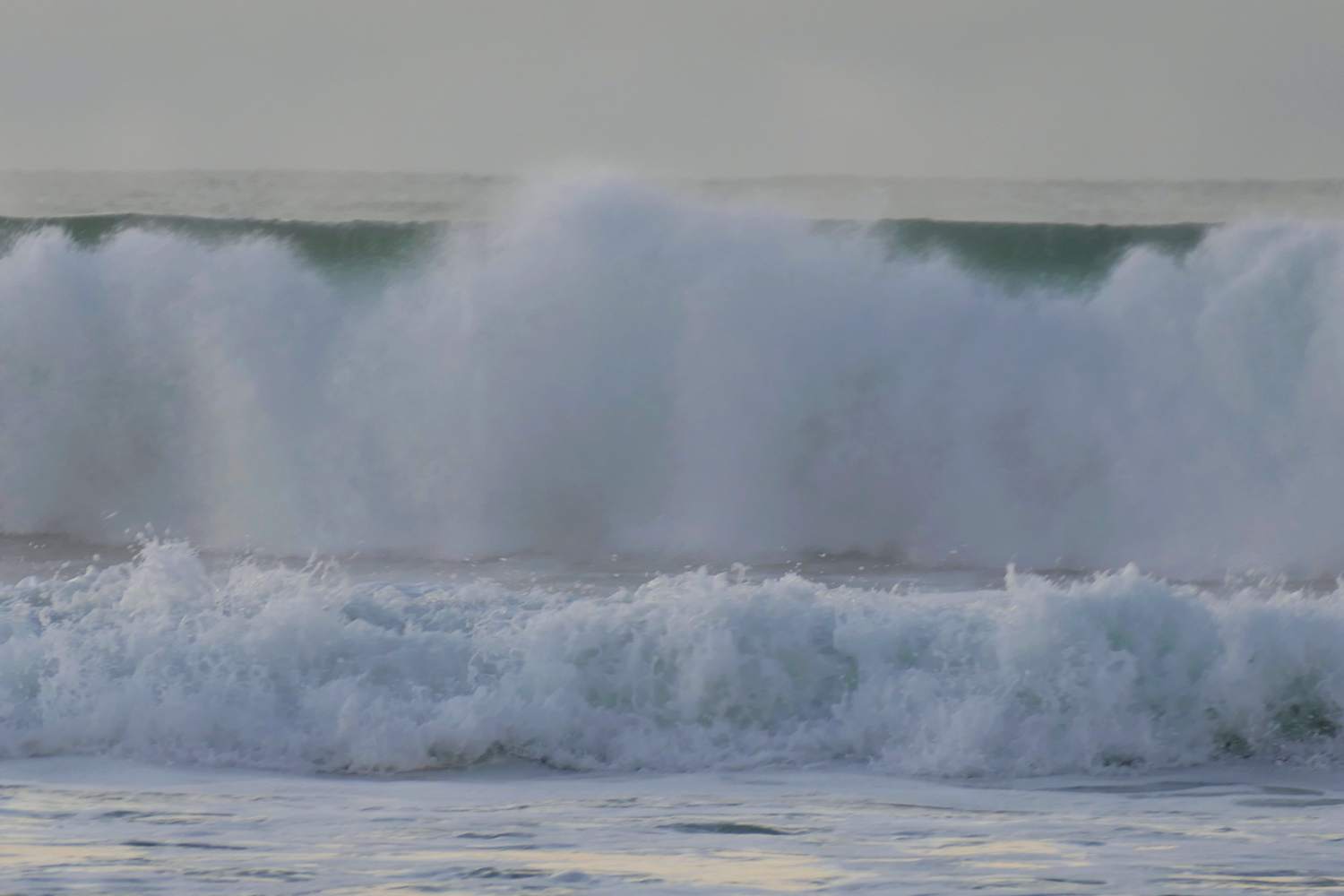 It’s not barbarians at the gates today, it’s the sea threatening the ramparts. 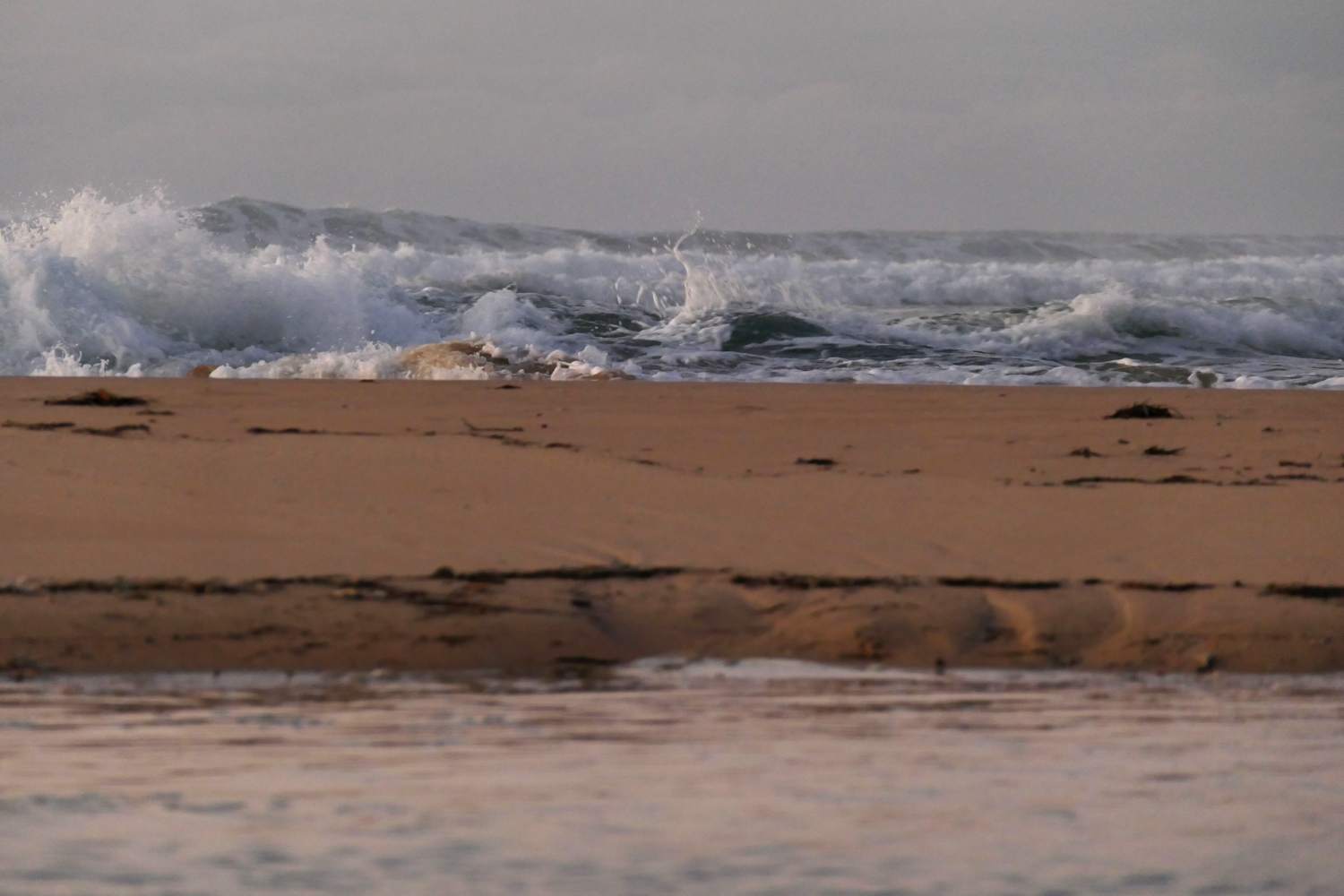 Ten minutes later the sea is gate-crashing the river, waves with venom swamp a rampart. 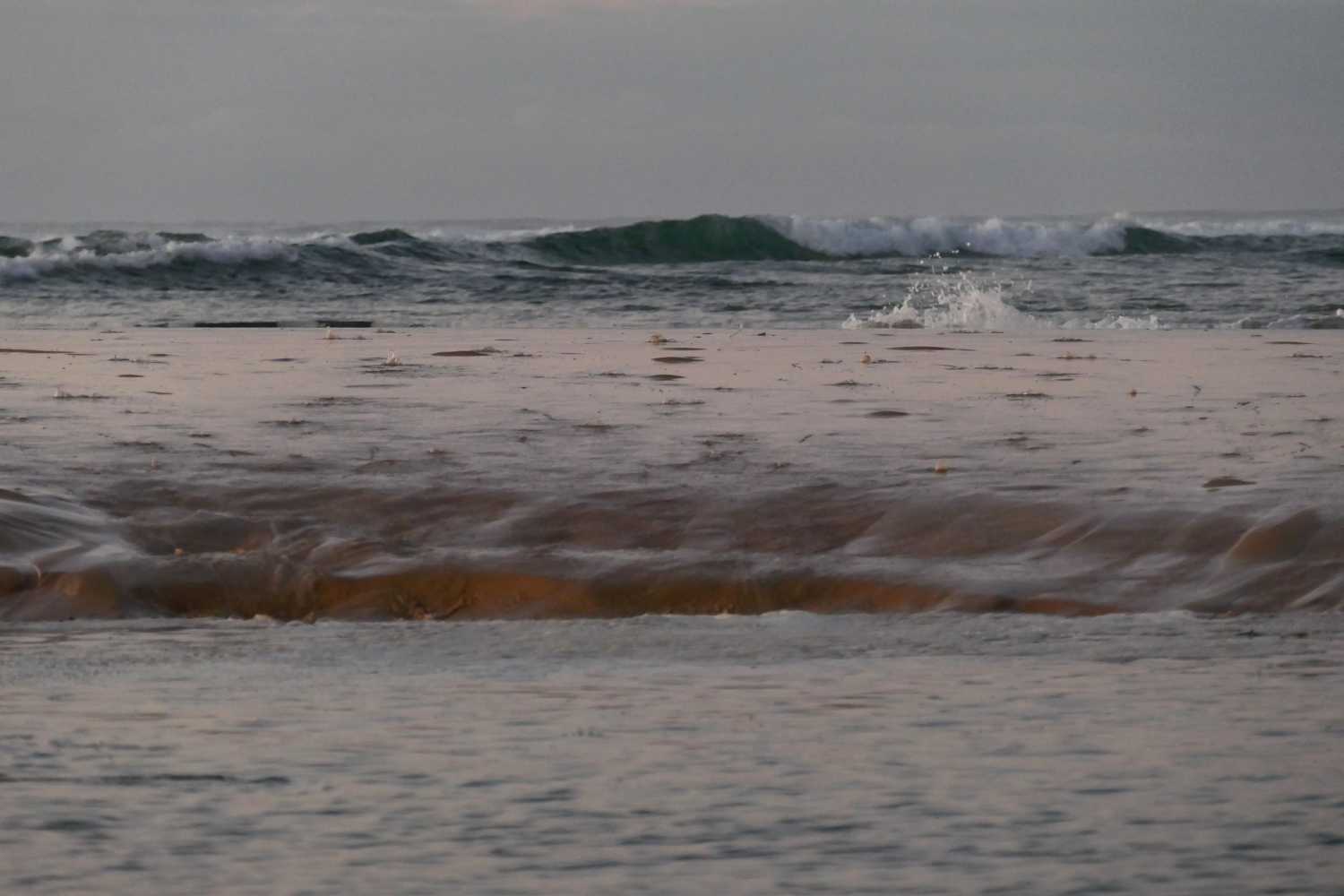 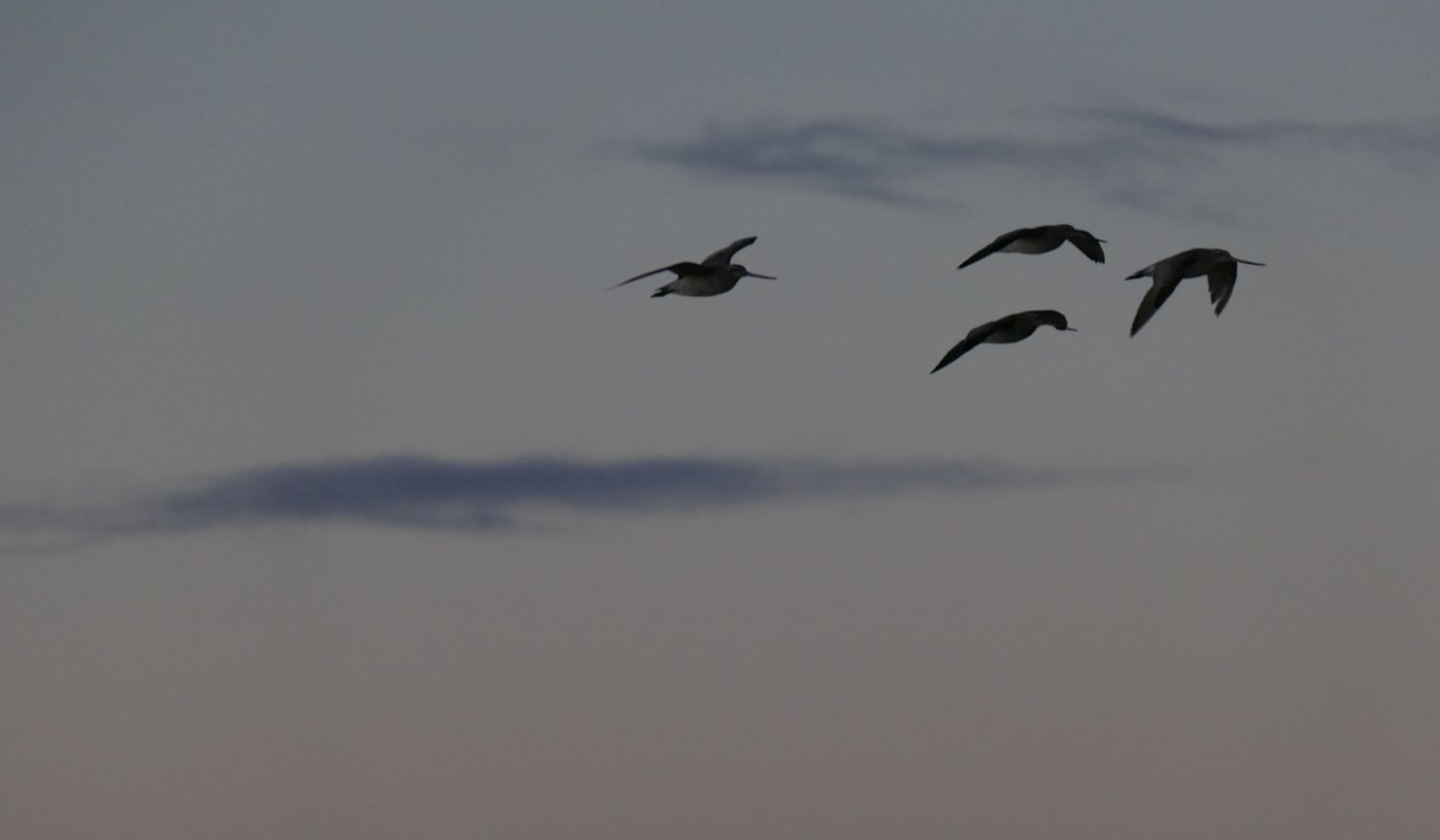 Four Godwits circle round then plump for the lagoon, on landing they’r straight down to business. They are over wintering, too young to migrate, too young to mate. 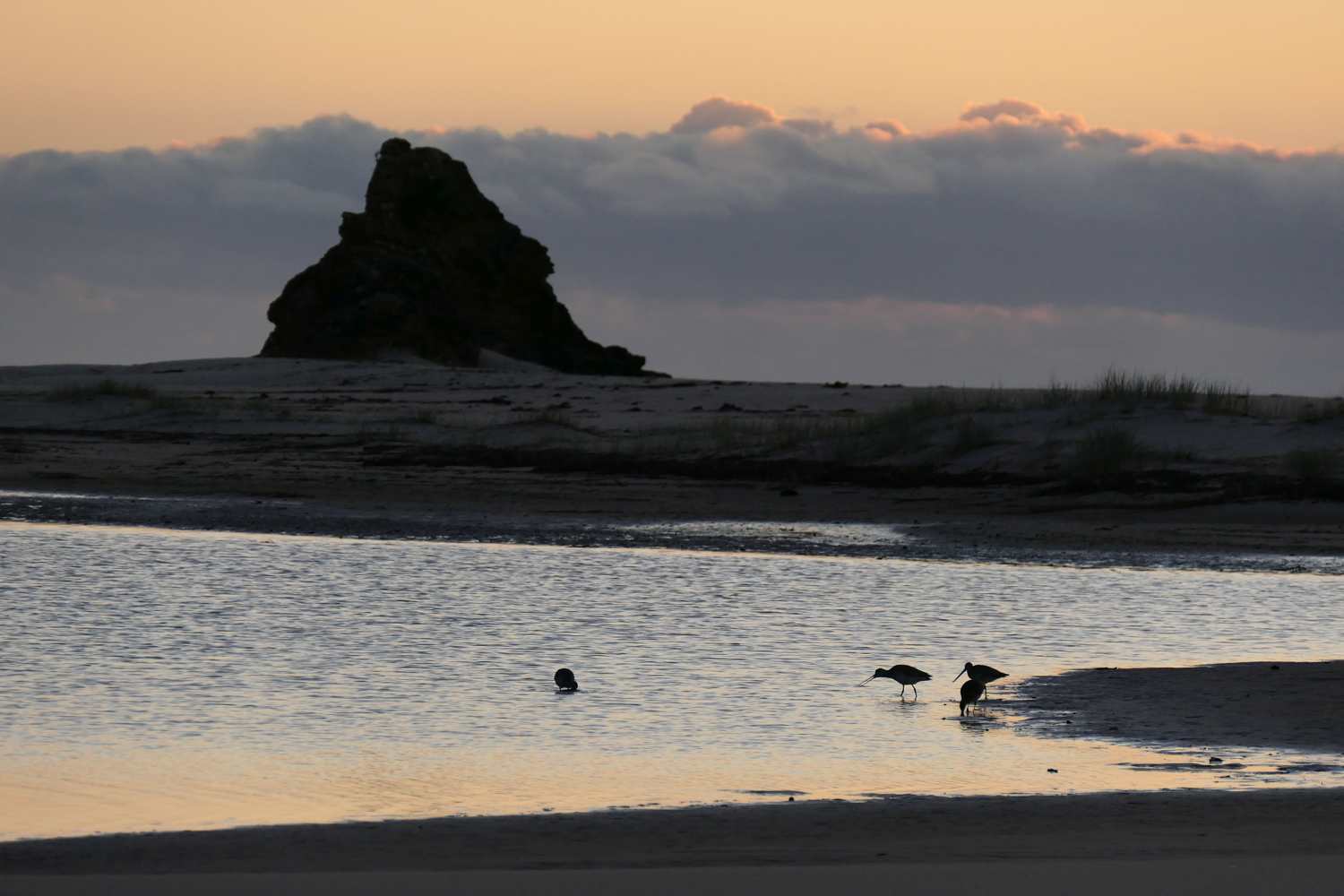 They are amazing athletes. Technology tracks these waders by satellite revealing that Bar-tailed Godwits hold the record for the longest non-stop journey without feeding of any animal. One population flies 11,000 km in eight days from New Zealand to breeding grounds in Alaska each year. 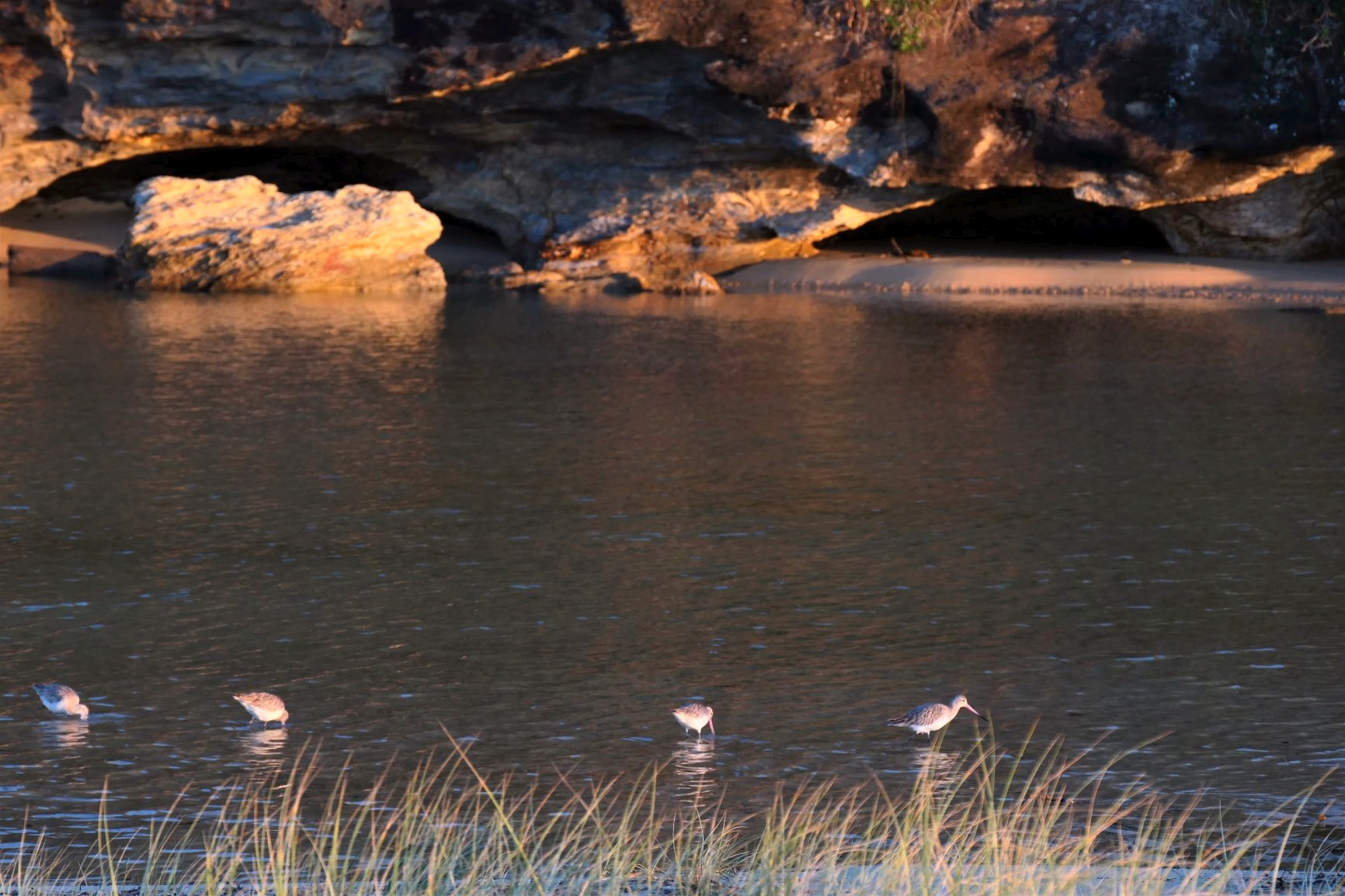 Magpies peal from the forest, a carolling audition for one of the heavenly choirs. Sun finally hurdles the wall of cloud, the Godwits look resplendent in their subtle, identical markings and that finely finished Pinocchio bill.

By understanding life as circulation, as a gift from a community of ancestors, we can see death as recycling, a flowing on into an ecological and ancestral community of origins. In place of the Western war of life against death whose battleground has been variously the spirit-identified afterlife and the reduced, medicalised material life, the Indigenous imaginary sees death as part of life, partly through narrative, and partly because death is a return to the (highly narrativised) land that nurtures life. Val Plumwood. [2] While canoeing alone in Kakadu, the Northern Territory, in 1985, she was attacked by a crocodile and death rolled three times. Severely injured, she crawled for hours for help. The dangerous attack led her to explore death within an ecological and indigenous context. (The canoe is on display in the National Museum of Australia).

There is a rapid population decline in migratory shorebirds. (Alarmingly, migratory shorebirds have declined by 72% in the last thirty years. Dec 3 2019. The Conversation). How could we bear to lose these wonders?  [See the Overwintering art project and some of my poems for the project.] 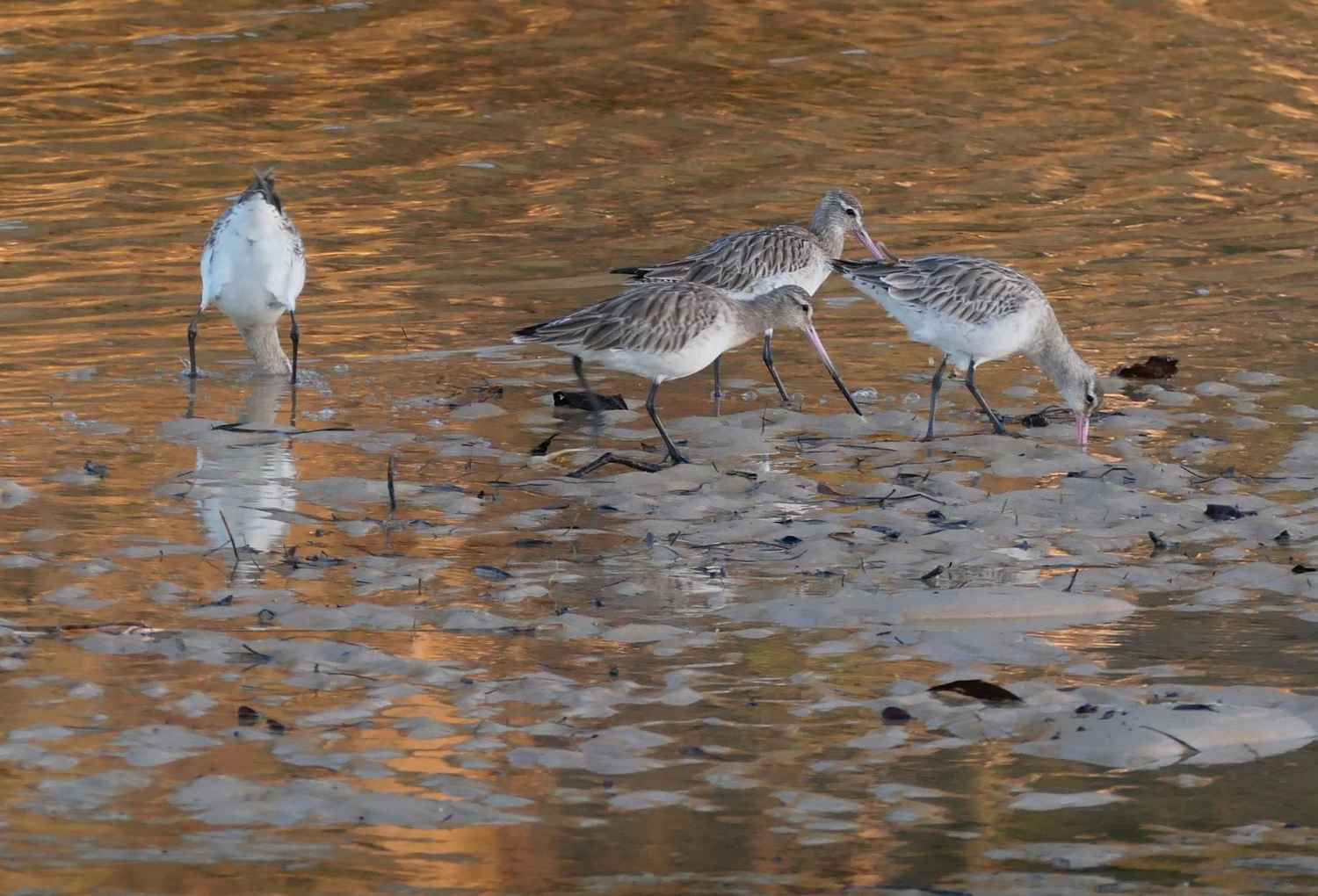 The sea is doing its Bhastrika thing, to increase life force and energise the body – just what I need. 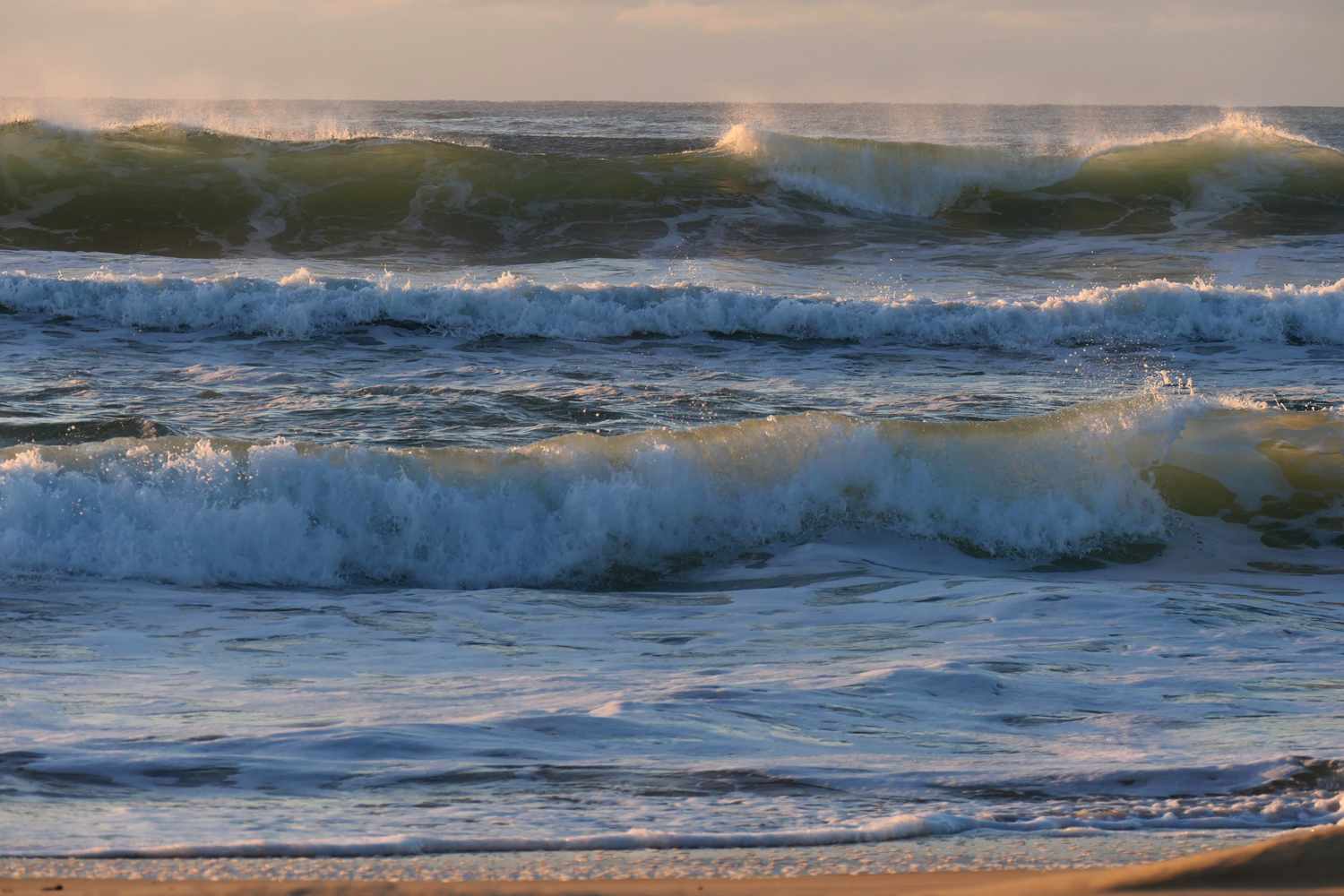 Now I have put my travelling behind me and ask to learn more about this place and help safeguard it, take some responsibility, be alert. I have been urging council to protect this estuary – meetings, letters, phone calls are laborious for the impatient. 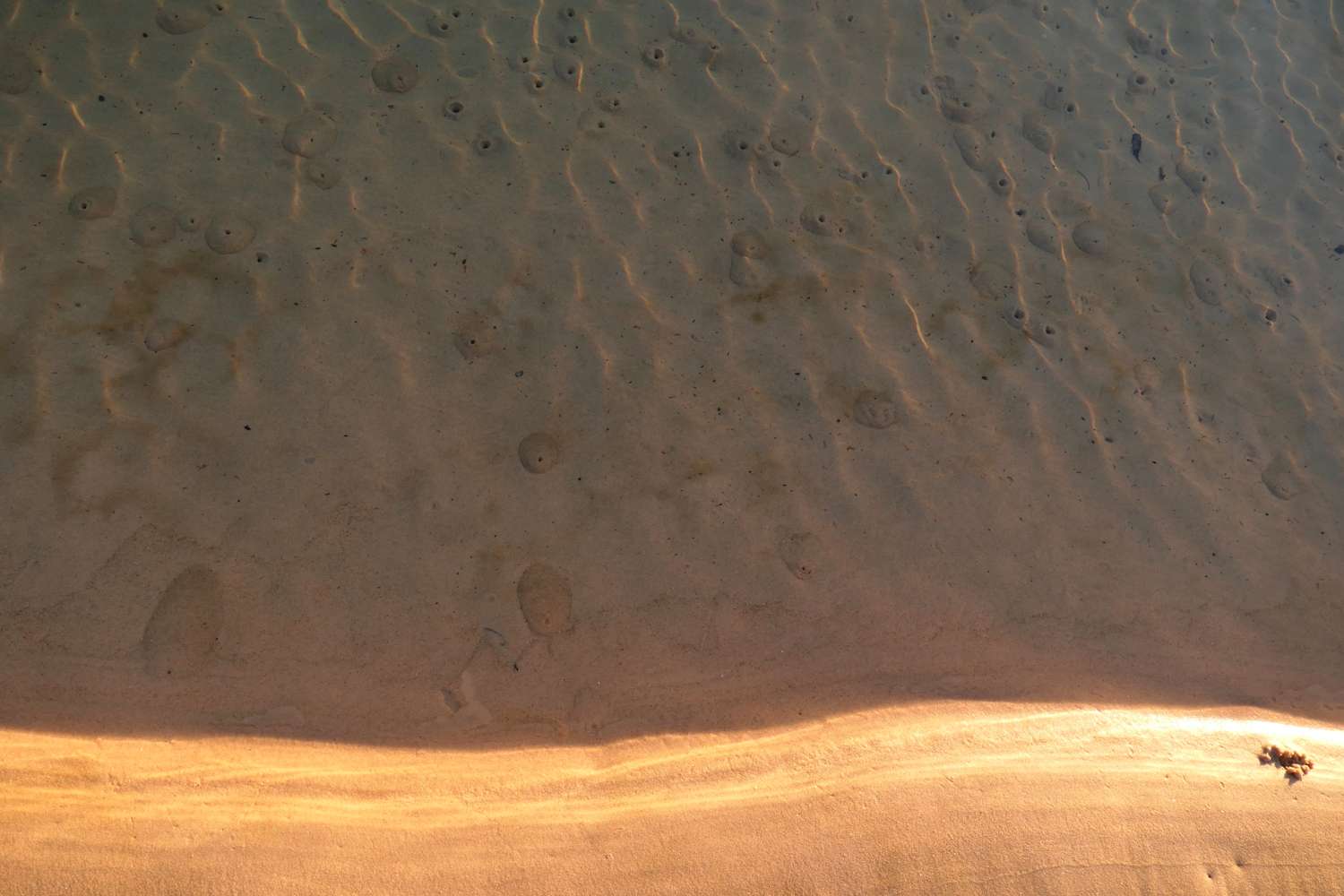 I don’t know exactly what a prayer is.
I do know how to pay attention . . .   Mary Oliver, ‘The Summer Day’ 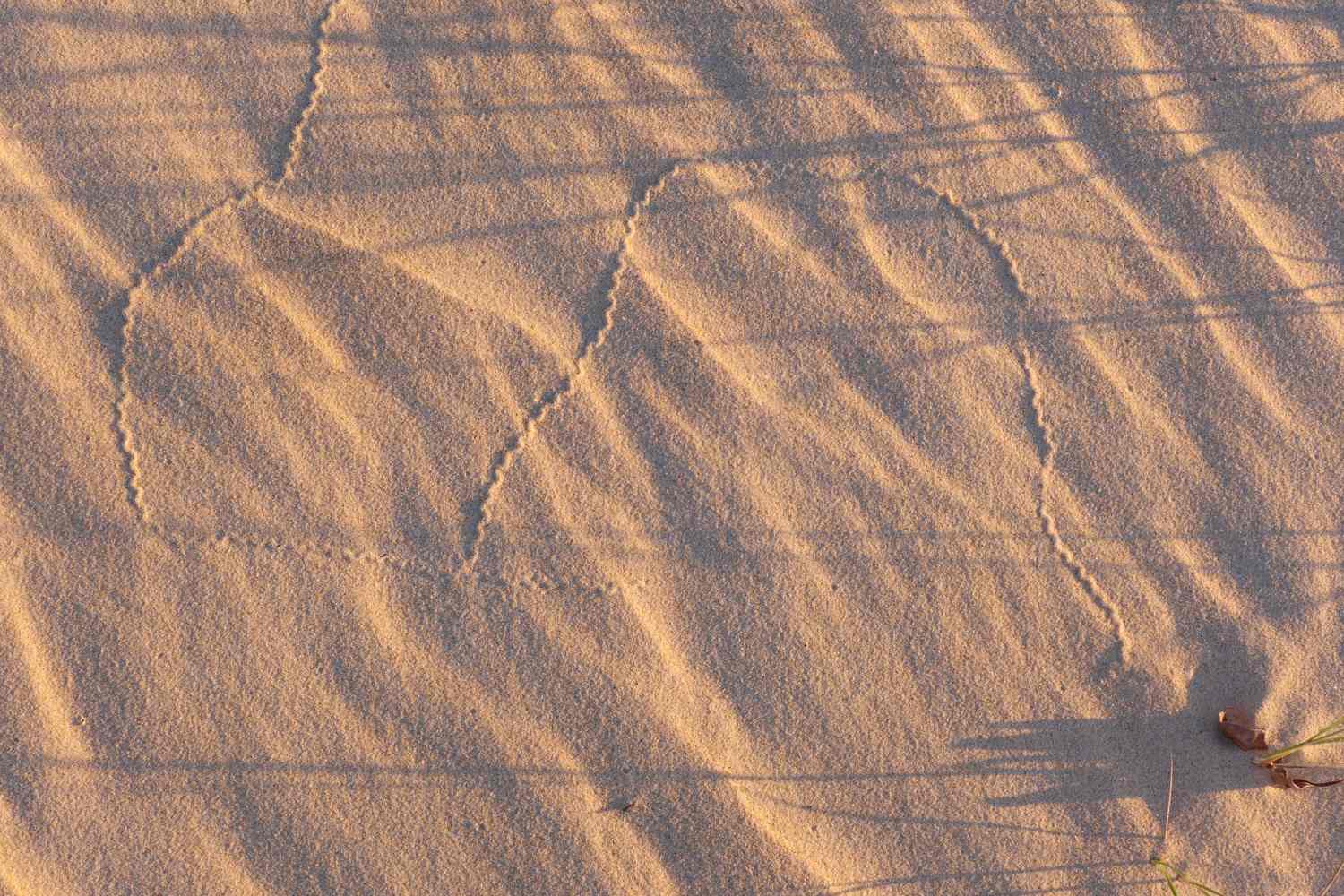 Everyday is extraordinary. Ideographs in the sand, written by?

After breakfast a little weeding, exhausted I sit on the deck, take my shirt off, the air is cold, the winter sun washes me in vitamin D. This virus of mine (Ross River) just keeps truckin. I peel an orange picked from our garden. I peel an orange picked from our garden. The juice runs through my beard, I feel that this is luxury, I revelled in the freshness. Perhaps my emotion was nourished by the knowledge that my mother as a girl didn’t see an orange for 5 years during the war, or memories of my first acid trip – a schoolboy eating an orange, experiencing each individual cell in each segment as a globe of life-giving wonder. Or feast days at my English prep school, when our miserable diets were enhanced by a roll, an apple and an orange, which seemed at the time pure luxury.

In the evening I happen to watch Oranges and Sunshine[3]

Charlotte (played by Frederay Holmes): I remember leaving England, I was 4 years old, I was in a children’s home because my parents were dead. Then they sent me on a boat to Australia. . .

No. No parents, no guardians, just a couple of hundred kids.

Well that can’t be right. What do you mean? It’s simply not legal. There’s no way that a group of unaccompanied children will just be shipped off. That’s illegal, that’s impossible.

Are you calling me a liar.

No, of course not.

It was such a sad story, well told, unimaginable, and with a total lack of justice. ‘The last children sailed in 1967. But it is only recently, as their stories have been told, that details of the abuse, and the official sanction which made it possible, has become public. The Australian government issued an apology in 2009 for the cruelty shown to child migrants . . .  The Australian royal commission on child abuse recently revealed 853 people had accused the Catholic order Christian Brothers, which also took in child migrants, of abuse.’ [4] 130,000 children were got rid of to Canada and Australia.

This echoes with the stolen children here. Between 1910-1970, Indigenous children were being forcibly removed from their families. They became known as the Stolen Generations. An estimated 100,000 children (minimum) were removed by governments, churches and welfare bodies to be brought up in institutions, fostered out or adopted by white families. They were taught to turn their backs on their Indigenous heritage. Their names were often changed and they were forbidden to speak their traditional languages. There are elders living here who have told me their stories, of whispering their language, of being beaten in Kinchella Boys Home south of here.

A national inquiry published the Bringing Them Home Report (1997) estimated that between 1 in 10, possibly as many as 1 in 3, Indigenous children were removed from their families and communities. It noted how the resulting trauma has been passed down through the generations. Australia is still living with the repercussions.

I was fortunate, left England to travel round the world, hitchhiked through the Middle East and on to India and arrived here to make some money and continue East, but fell in love with the place.

Wellness advocates used to talk about Bali retreats and coconut oil. Now it’s Bill Gates and 5G . . . Memes turning up on Maga pages were being reposted by yoga teachers who once quoted Maya Angelou but were now quoting David Icke, while health and wellness mega-influencer Pete Evans was posting about Obamagate, inflated Covid-19 death counts and, most bizarrely, that US race riots were “instigated by organisations affiliated with the elite” – alongside recipes for ham hock soup.

What was going on? How and why did the largely progressive and left-leaning proponents of wellness merge with rightwing conspiracy theorists and Donald Trump supporters? [5]

[1] Yasemin Saplakoglu, ‘Ripples in space-time could explain the mystery of why the universe exists’, Live Science, February 19, 2020

[3] Oranges and Sunshine, 2010 Australian film directed by Jim Loach.  Based on the 1994 book Empty Cradles by Margaret Humphreys, about ‘home children’ a scheme of forcibly relocating poor children from the United Kingdom to Australia and Canada. Deported children were promised oranges and sunshine but they got hard labour and life in institutions. Many were given to the Congregation of Christian Brothers, where they were repeatedly raped. https://en.wikipedia.org/wiki/Oranges_and_Sunshine