Covid-19 can damage lungs of victims beyond recognition, expert says. The Guardian

The Long Battle Over ‘Gone With the Wind’: African-Americans have protested against the 1939 blockbuster from the start, even if white America didn’t want to hear it. NY Times

Beijing has seen another 36 infections linked to a food market, with experts fearing a second wave will wreak havoc on China’s capital. News.com.au

Rescued from Australia’s fires, a small fleet of wild platypuses is released back into their wetland home and into an uncertain future. NY Times

On the way to the forest we stop at Warrell Creek for the light show. 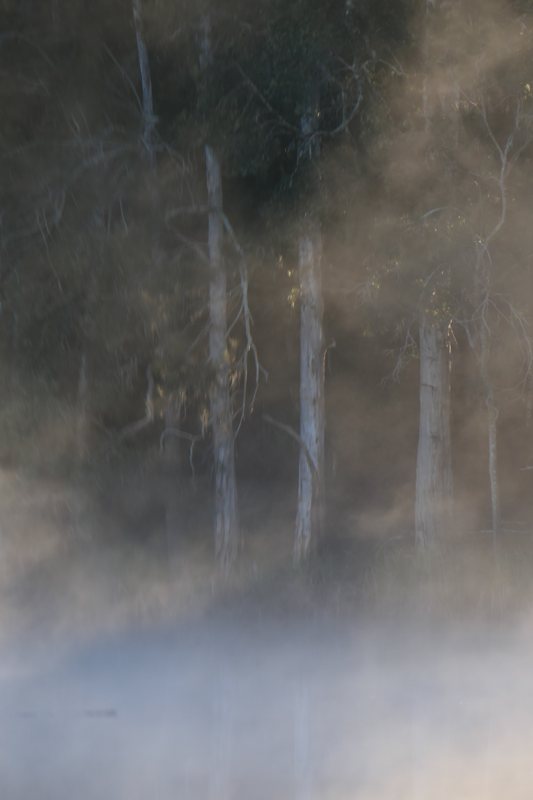 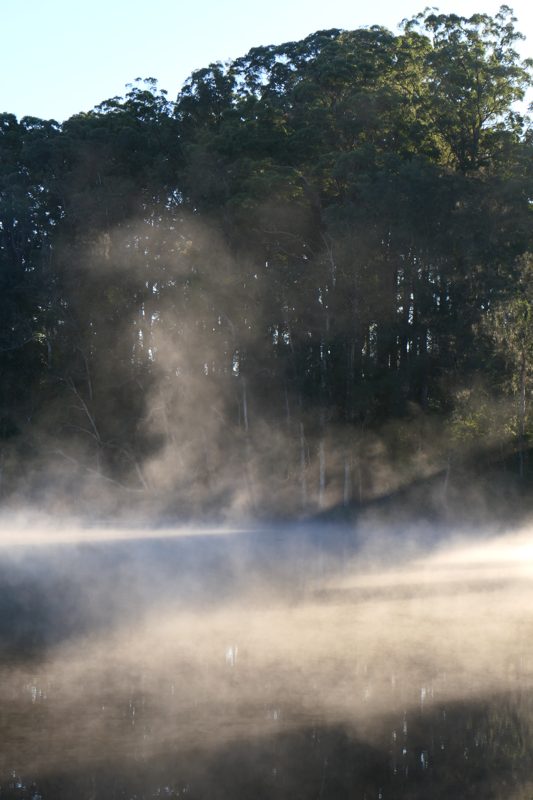 Trees have been cleared for the straight lines of the brand new highway. 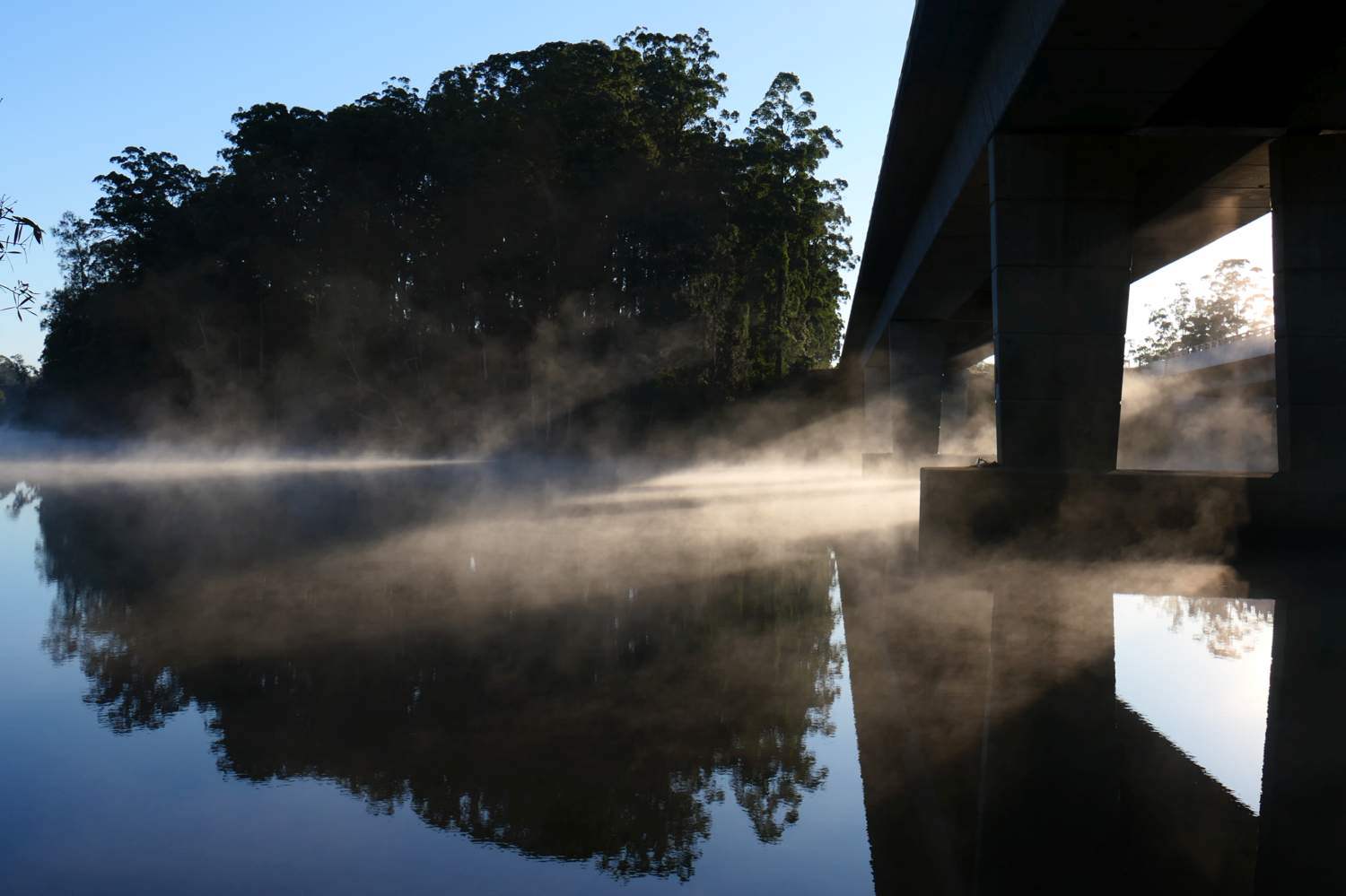 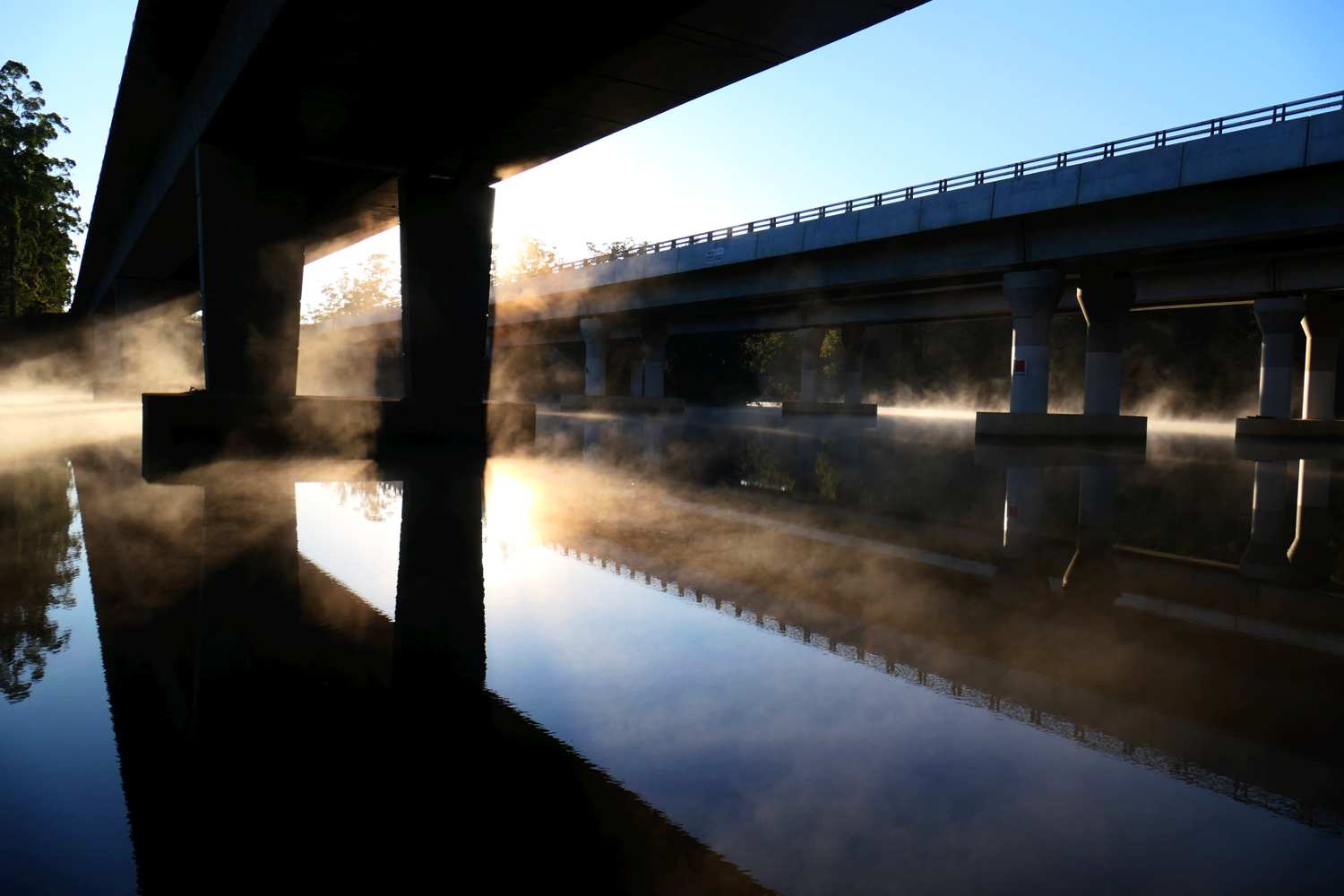 On the way to Scots Head, we pass a small fig that always holds my gaze. It is alone in a paddock, but has a magic. The large fig opposite is a fine tree but never holds me. 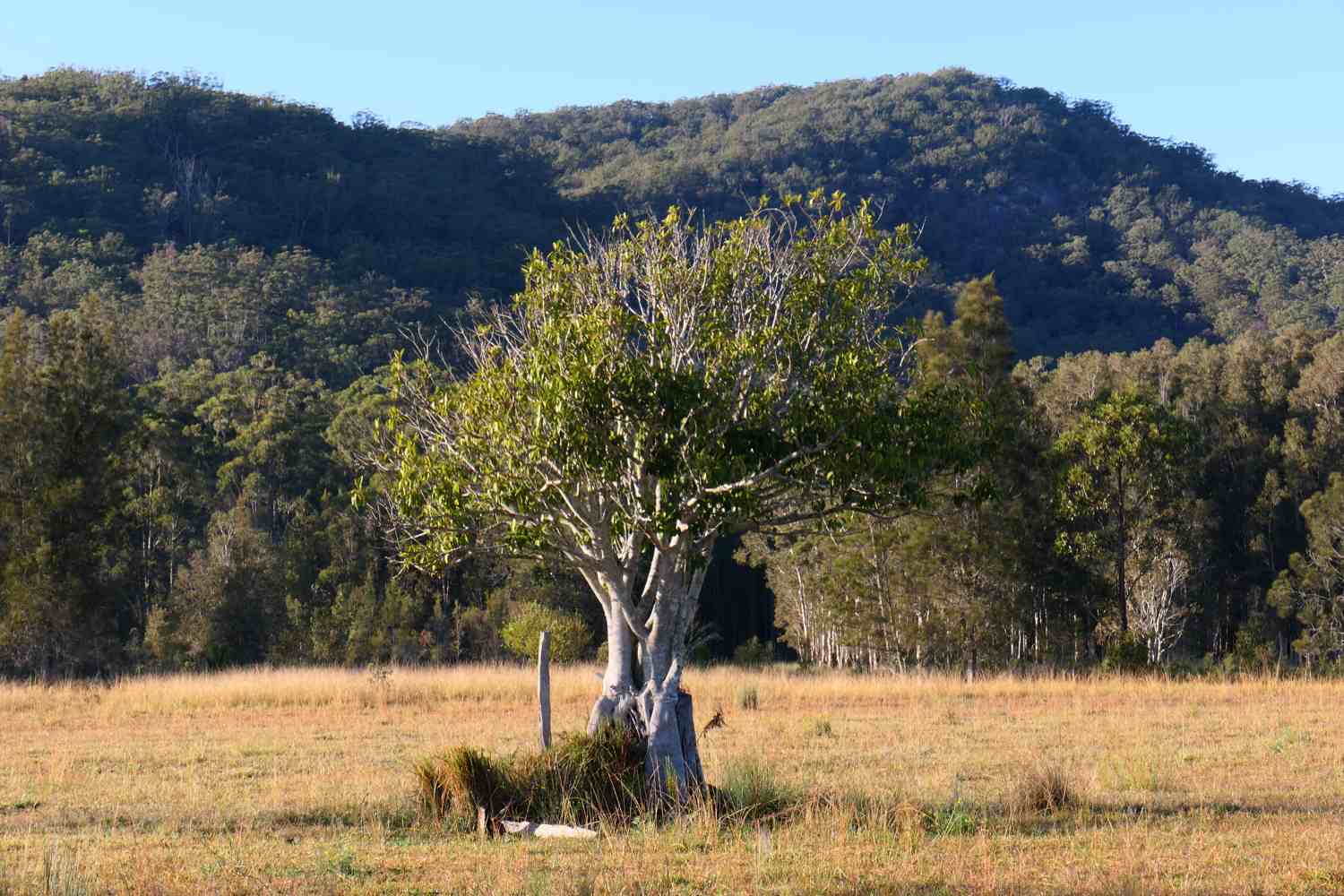 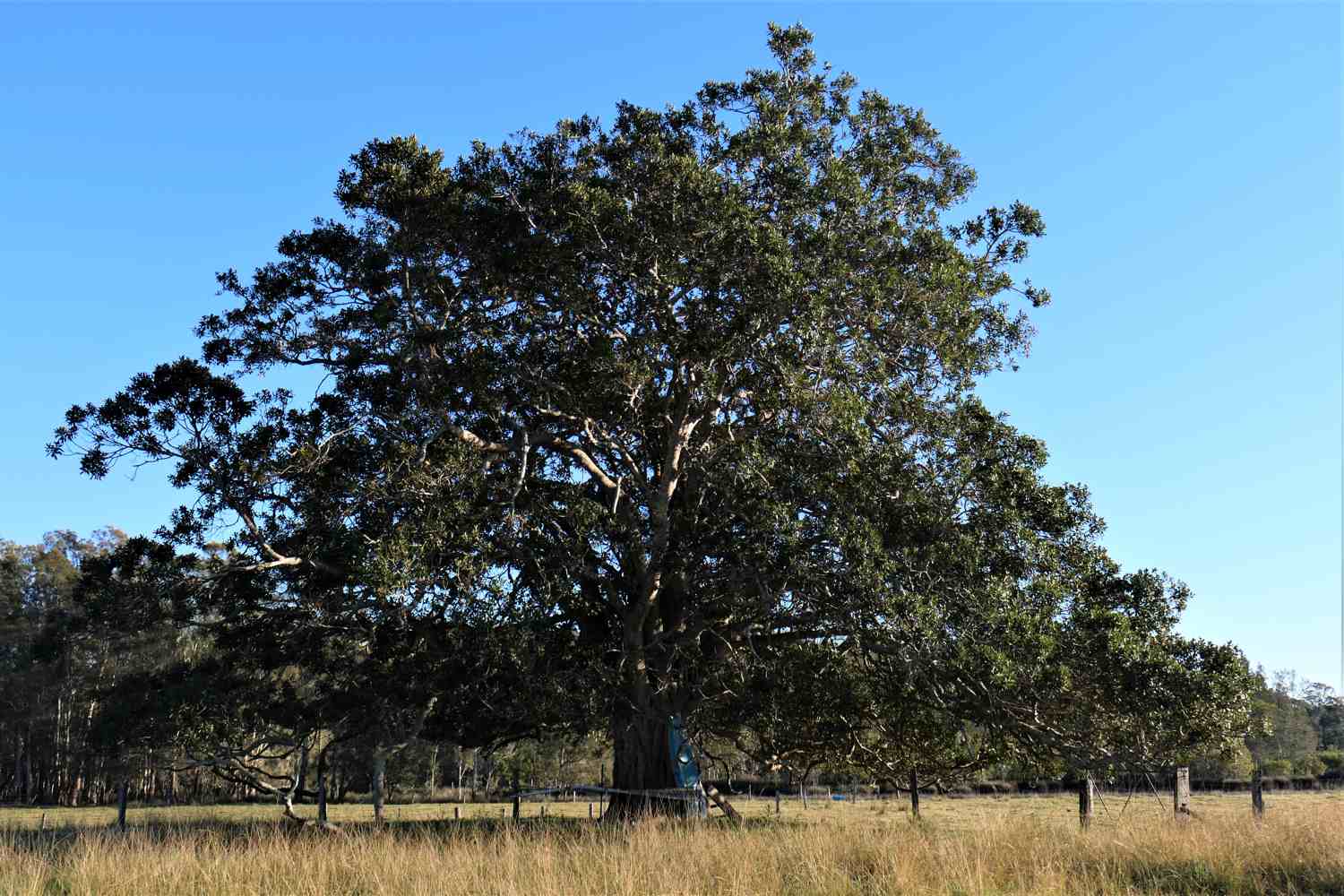 And overlooking these two trees a shiny motionless windmill. Our technology is present everywhere. 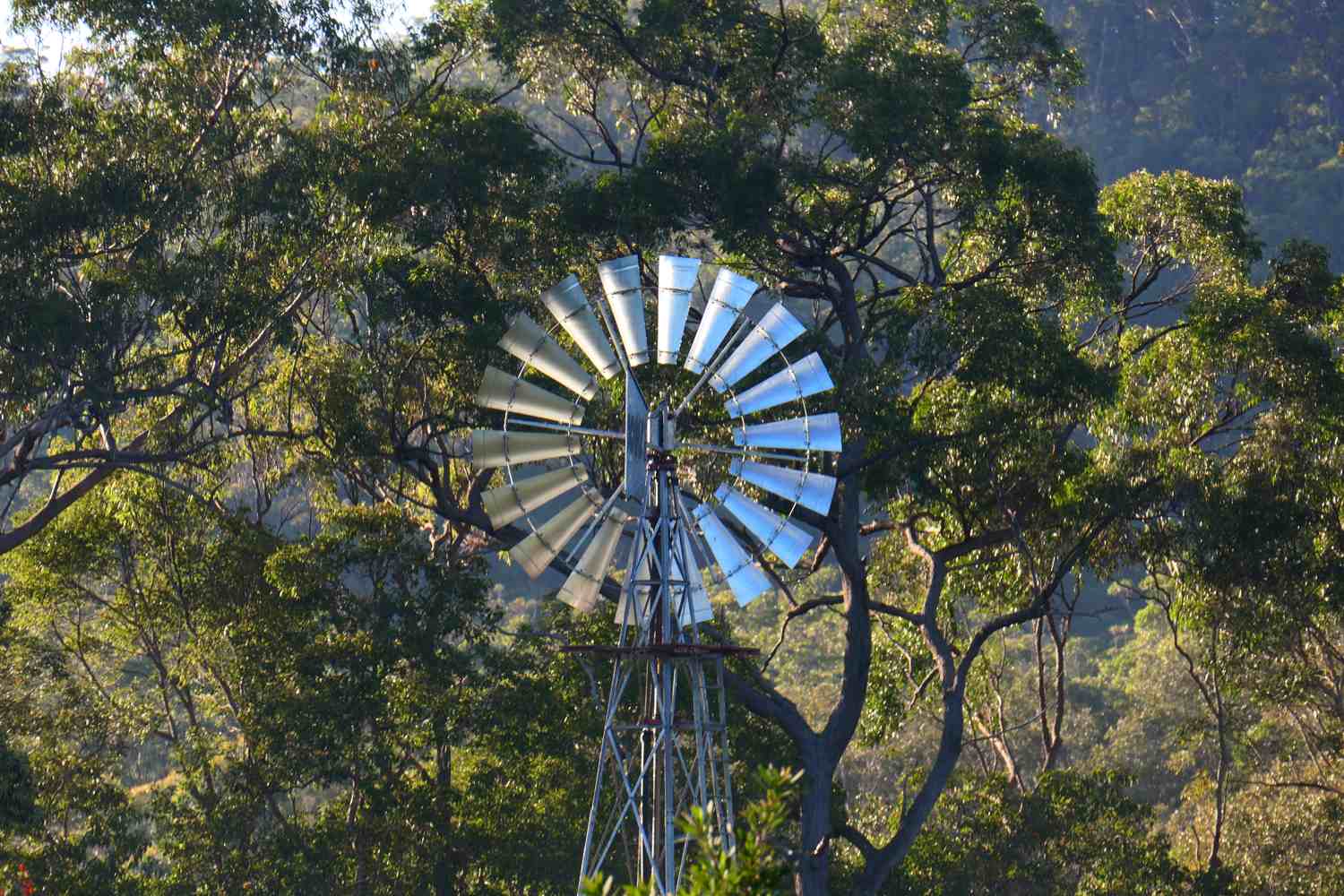 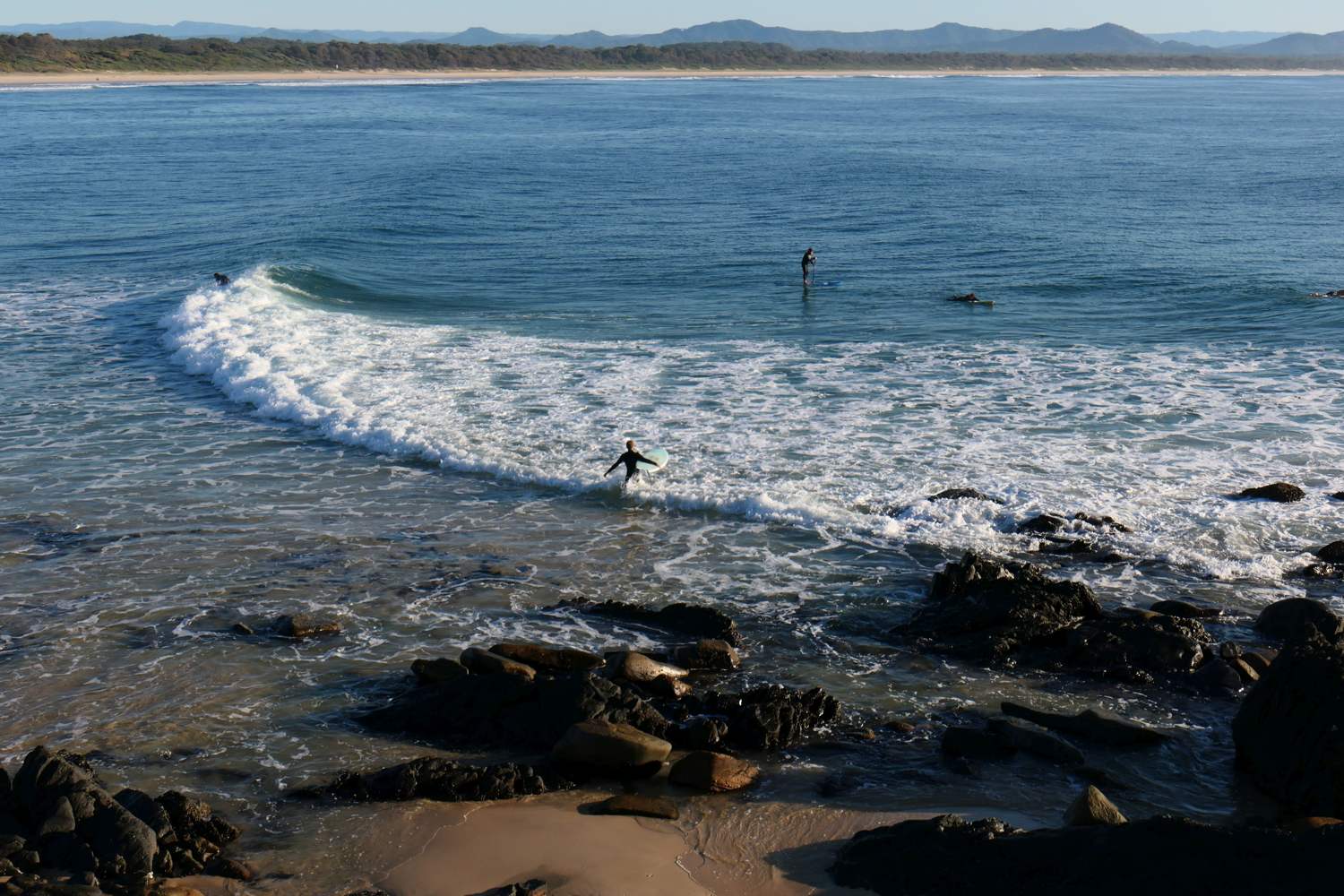 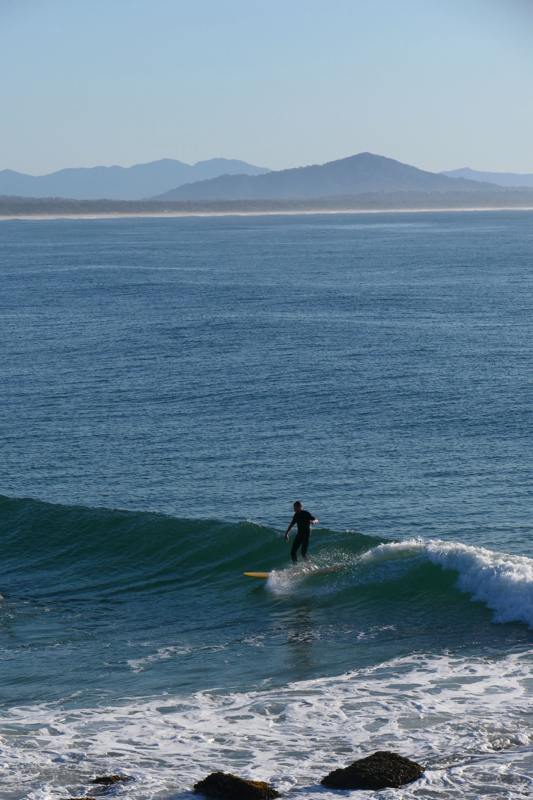 What caught our eye were the young gannets diving in among them. 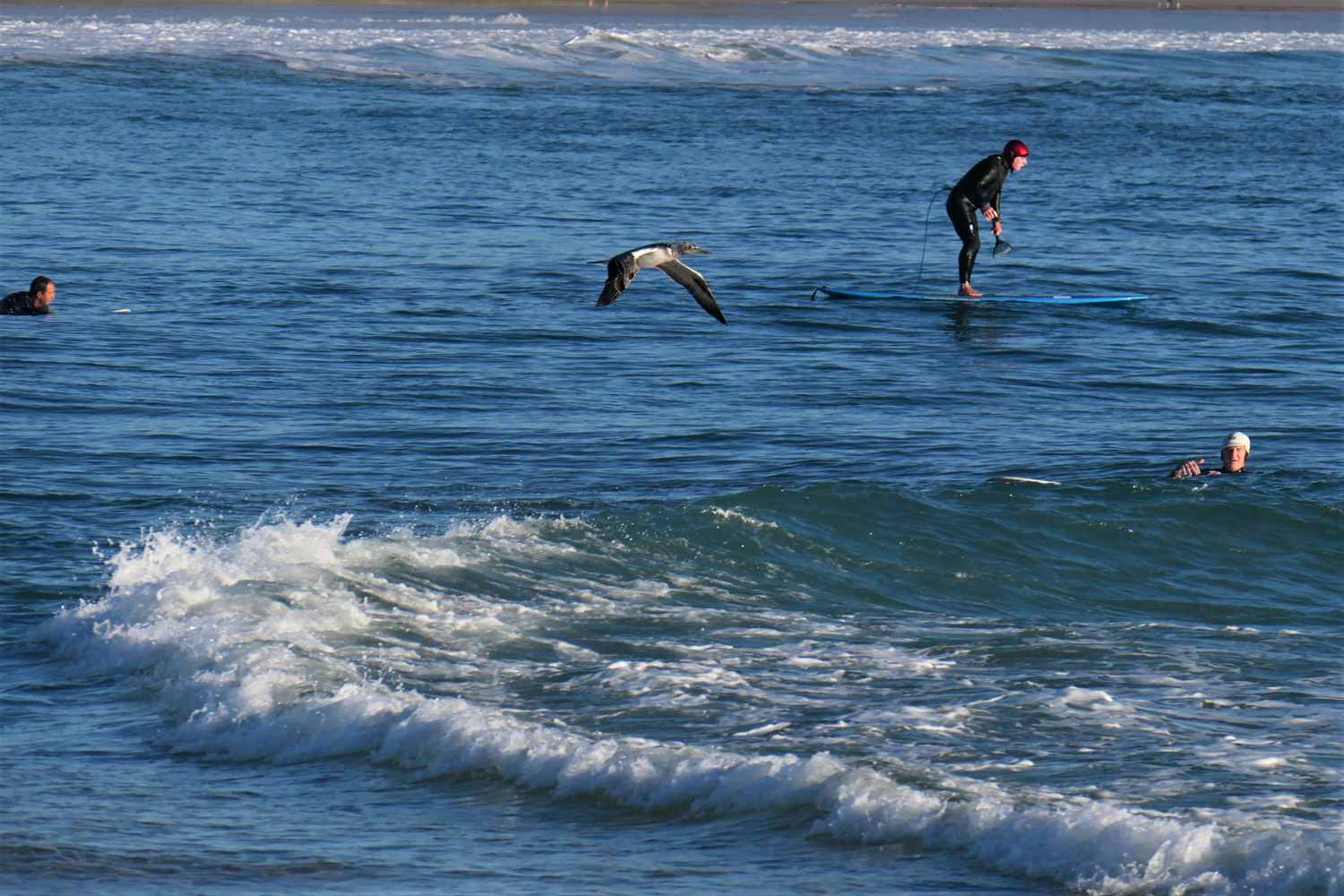 On the headland we feast on a weed, Cape Gooseberry or Chinese lantern,  a native of South America. A few termite mounts around. Two Whales, far out to sea/see. 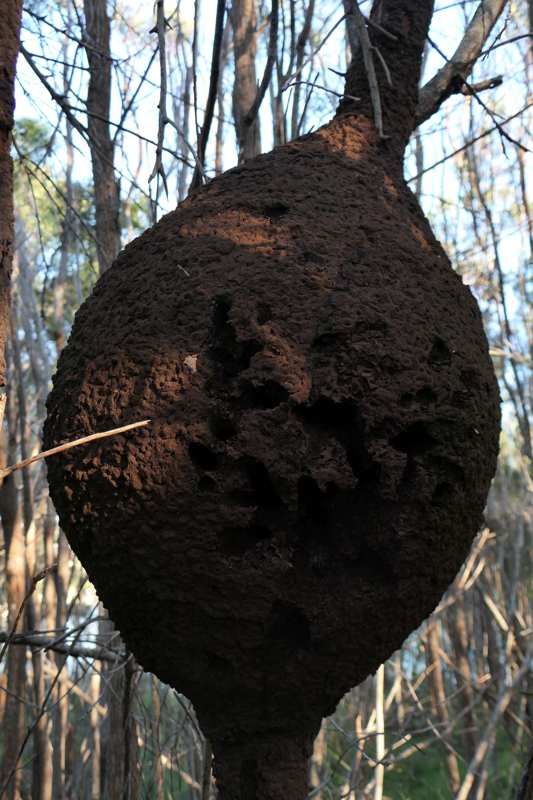 More surfers on the toilet block (Artist Guy Crosley and a team of local volunteers, SEE  post from 2015). 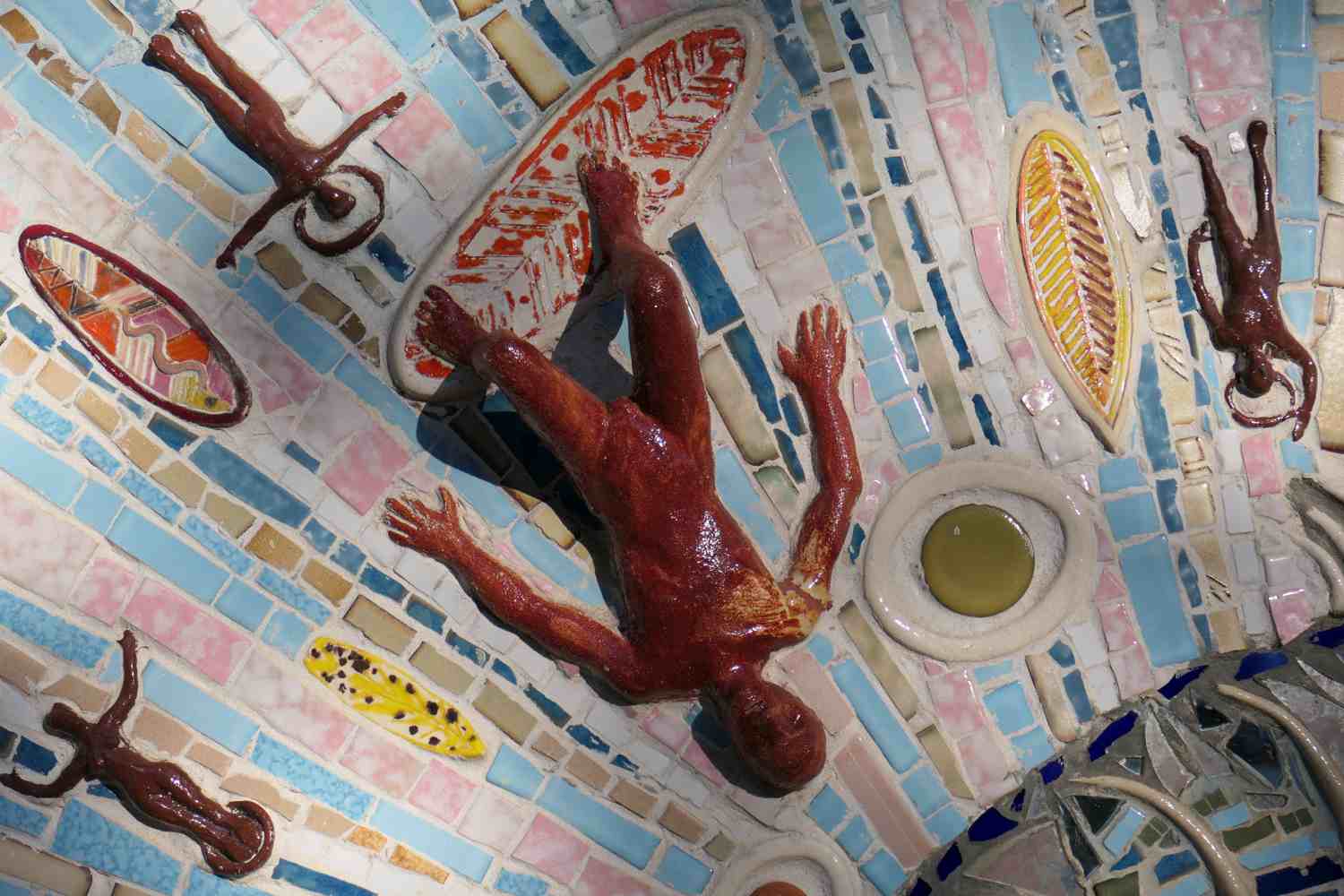 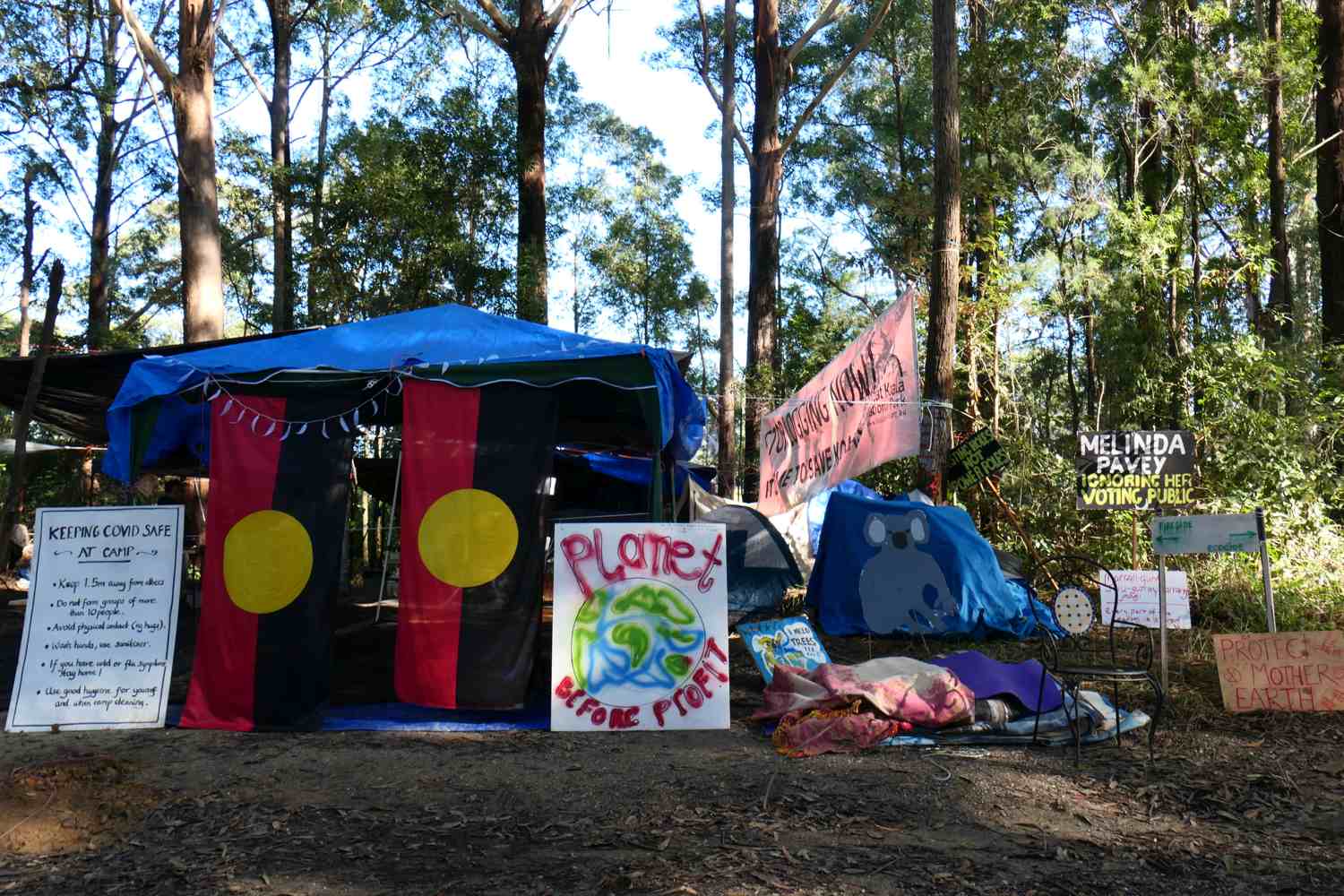 Nambucca State Forest. At the protest camp, we are asked about wombat scats. Wombats are no known here and their presence would add to the argument. From the description they sound right, but we ring Myf, a friend with a PhD in possums and hand over the phone.

It’s still cold in the forest about 10 degrees. Protests like this one are putting pressure on governments to halt the logging of native forests following the country’s devastating summer bushfires. Roughly half of NSW’s State Forests  burnt to varying degrees. Nearly a million  hectares of native forests were affected.

We are destroying our natural heritage for a few jobs, a very poor financial outcome and for political ideology. 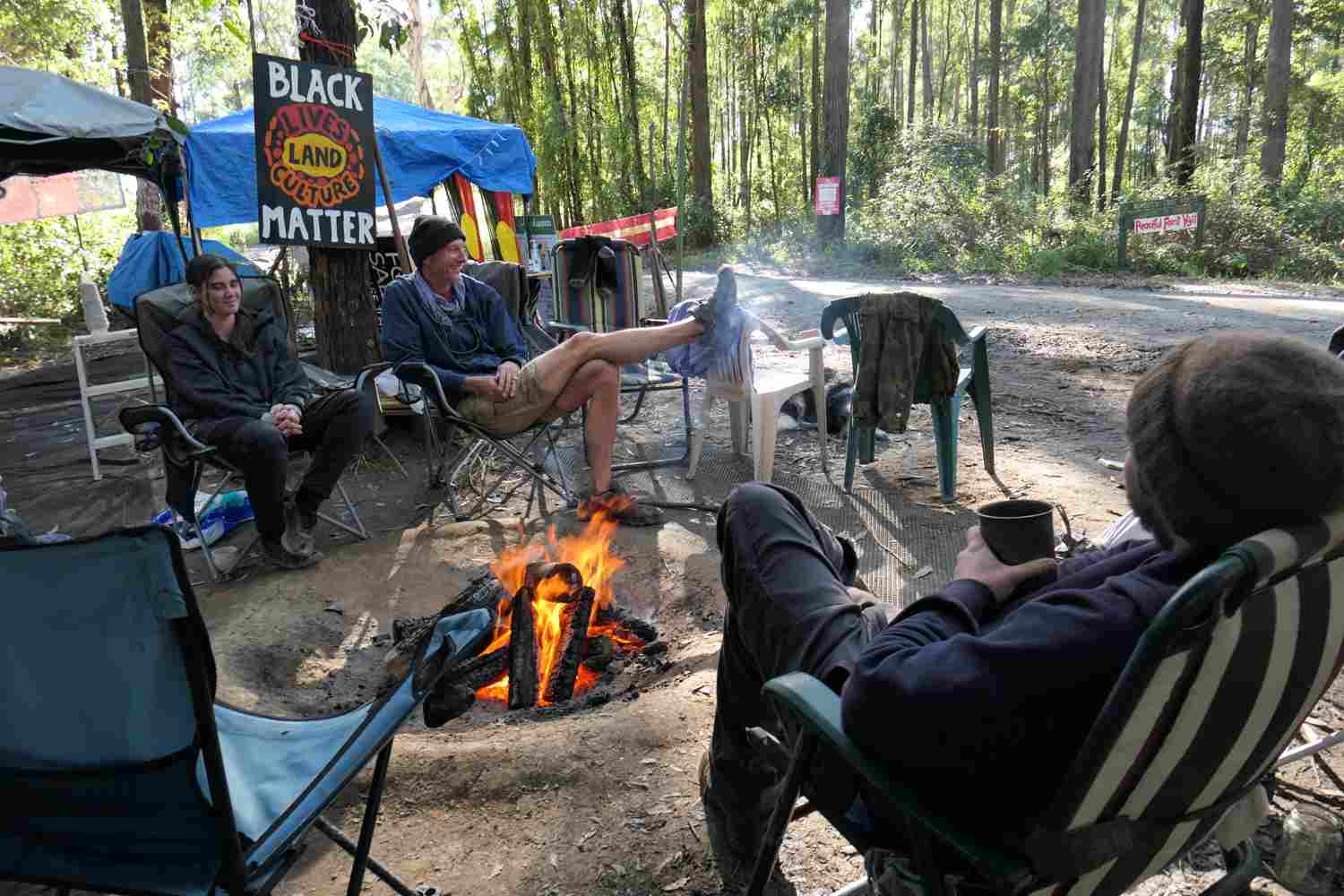 We have brought oranges, vegetables and chocolate biscuits, and thank them for what they are doing. We are working in different ways, I explained I was pressuring council. Some of them thought that this was in Bellingen Council, not Nambucca. The Land and Environment Court temporarily banned logging in 13 unburnt forest areas, I understand that there is another hearing tomorrow. 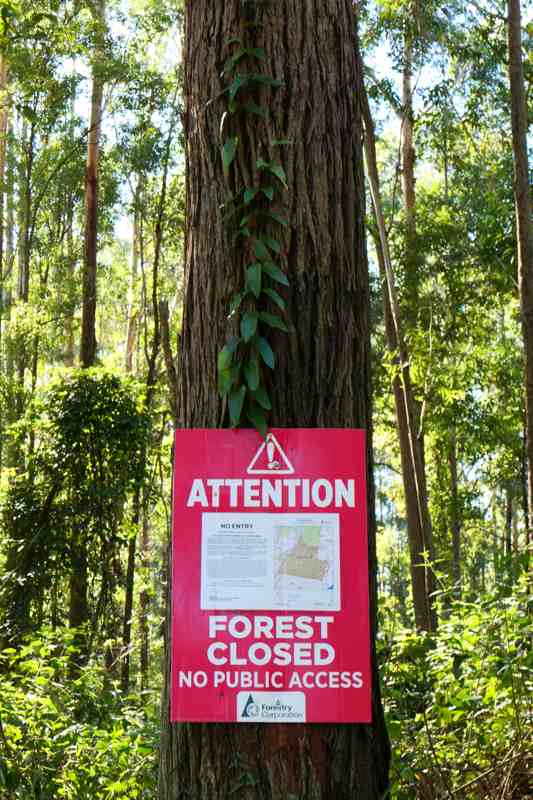 Above this sign looms this tree. You can donate to the Gumbaynggirr Conservation Group here.

We, The Gumbaynggirr Traditional Owners and Custodians need your support to stop the logging of The Nambucca State Forest. These are our Gumbaynggirr traditional homelands and our cultural heritage. Sandy Jarrett. She, together with Gumbaynggirr elders, can be seen in my last post from this protest.

The only work available for Snyder in the wild was as a choker-setter for the Warm Spring Lumber Company, the most dangerous of logging tasks.  The way Snyder saw it, ‘I (and all other choker-setters) am/are daily subject to falling pecker-poles, snapped jill-pokes, toppling snags, rolling logs, giant caterpillars which the driver cannot see over the hood (to know and avoid you), tripping cables, swinging butt hooks, the idiocy of the man running the show, and other horrors too numerous to mention’. [1]

sacred in groves
Pine of Seami, cedar of Haida
Cut down by the prophets of Israel
the fairies of Athens
the thugs of Rome
both ancient and modern. [2]

The tree bestows its shade on all, even the woodcutter.  Indian proverb

In Angus McMillan’s ‘top paddock’ all the red gums are the same age: regrown from sleeper cutter days. The absence of large tree hollows makes the forest almost uninhabitable. The forest block is divided in two – allow 35 minutes for a walk around the north block and 40 minutes for a walk around the south block– each section may also be traversed diagonally. There was a Braiakaulung campsite in the gully in the northern block. The Scots did away with that. Someone has built a stick ‘mia mia’ below the clay bank of a dam. Late afternoon sunlight falls on the floor of the shelter. I crouch down to look at the pattern of leaves. Throughout the forest the sameness of trees is disturbing. Louise Crisp[4]

I vaguely recall correspondence from around a decade ago, and excavate an email.

Dear John,
On my window frame I have a quote from your article (Forest of Mirrors) published in ‘Five Bells’ in 2001: “the available poetic modes have not been suitable for an ecologically informed poetry. The question remains for another paper: what poetic forms might fulfil this task?”
I have been trying to find an answer to that question for the last ten years . . .  Louise

As a teenager the novelist John Fowles escaped the Blitz to a village in Devon. He became an ‘orthodox amateur naturalist’, learning botany, the names etc.

I spent all my younger life as a more or less orthodox amateur naturalist; as a pseudo-scientist, treating nature as some sort of intellectual puzzle, or game, in which being able to name names and explain behaviourisms…constituted all the pleasures and the prizes. I became slowly aware of the inadequacy of this approach: that it insidiously cast nature as a kind of opponent, an opposite team to be outwitted and beaten; that in a number of ways it distracted from the total experience and the total meaning of nature.[5]

[Nature’s] deepest value lies in the fact that it cannot be directly described by any art…including that of words. John Fowles, The Tree

Barry Lopez has written an introduction to the new edition and comments, ‘If you are living in a time of despair – in cultural despair, as we are now, or in personal despair after a tragedy – and you’re filled with grief, this essay opens up a kind of thinking that is to me, one of the ways, if not the oldest way, we have of thinking clearly about ourselves and our relationship to the world.’[6]

Yesterday I noted Chelsea Steinauer-Scudder exhortion, ‘Go outside and find a tree that you feel drawn to.’ Conceptual artist Genevieve Belleveau goes further, She fell for a birch tree aged eight, and has become an ecosexual, having sex with trees and plants. ‘At that point in my sexuality, I was already having orgasms by rubbing myself on objects . . . But I felt a kind of shame afterwards, because I did that to a living entity without its consent.’ [7] As Thomas Berry writes, ‘Trees have tree rights, insects have insect rights, rivers have river rights, and mountains have mountain rights.’[8]

Slavery and Black Lives Matter are in the news, and what has been forgotten is Native American slavery and murder. I received an email from the NY Review of Books with an old piece by Peter Nabokov:

At the time of first contact with whites, the native California population amounted to some 350,000, perhaps the densest concentration of Indians in the country. But they were divided into at least sixty major tribes that, in turn, were made up of scores of small, independent, autonomous villages that spoke upward of a hundred separate languages. After the epidemics, mission programs, land losses, and peonage of the Spanish period, about 150,000 Indians remained on the eve of the US takeover. By 1870 the number of California Indians had been cut to under 30,000, a population loss that would continue until it bottomed out at under 17,000 by the turn of the century.

For over a quarter-century, Madley shows how the region became a quilt of many killing fields.[9] Of the estimated 80 percent decline in the California Indian population during these years, around 40 percent has been attributed to outright “extermination killings” alone. Yet each of these tribes and tribelets functioned as an independent cultural world. Each was knit together by strands of kinship and deep attachments to place, as well as oral traditions about both that were passed on from generation to generation. Strewn across California were not only human bodies, but entire worldviews. [10]

I should have known more, I have a book on Ishi ‘the last of his tribe’. In 1865 Ishi and his family were attacked in the Three Knolls Massacre, in which 40 of their tribesmen were killed as they slept. The gold rush brought tens of thousands of miners and settlers to northern California, In late 1908, a group of surveyors came across the camp inhabited by a Ishi, his younger sister, and his elderly mother who hid herself in blankets. She died soon after his return. 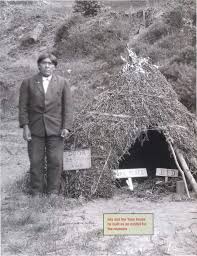 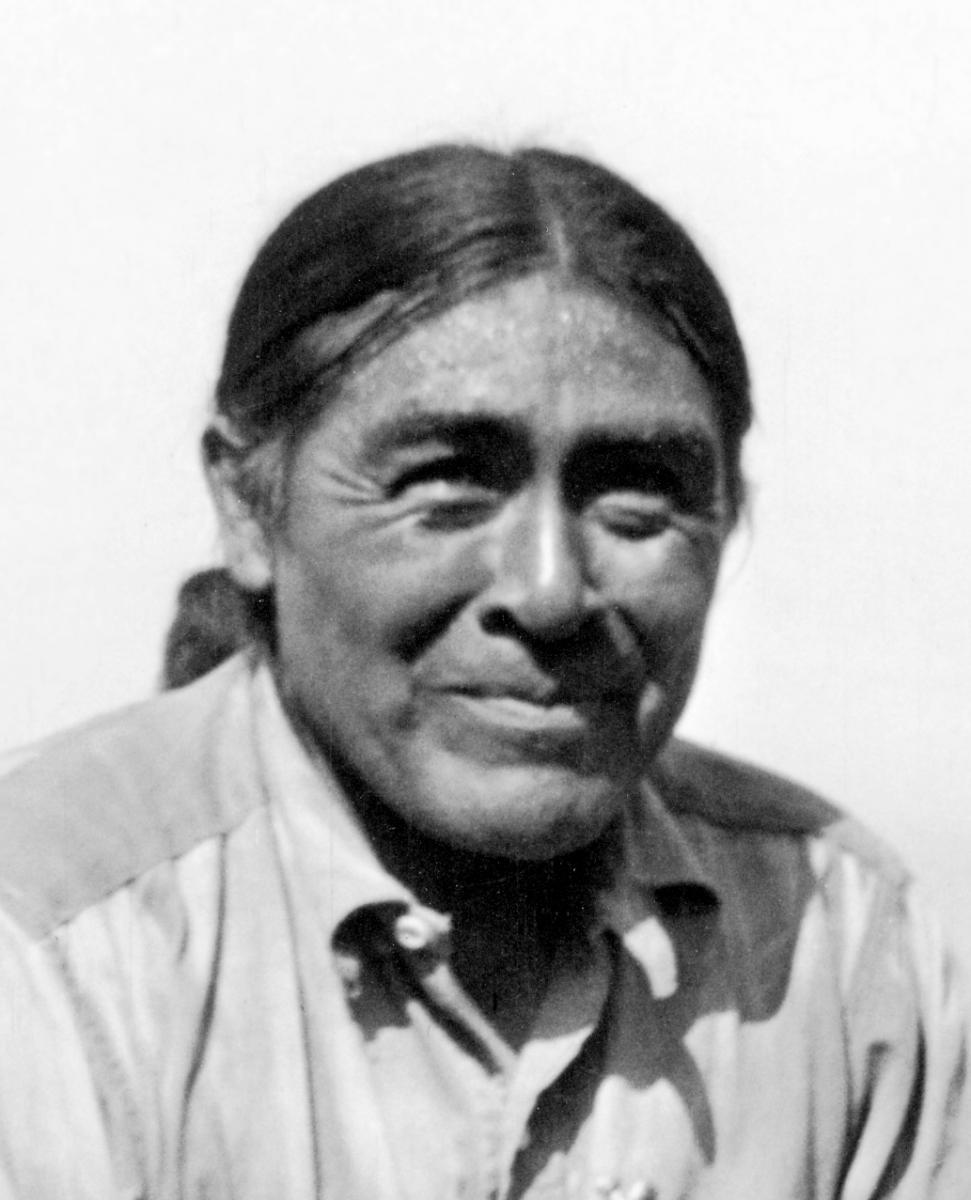 Ishi spent three more years in the wilderness, alone then was captured foraging for meat near Oroville, after forest fires in the area. Walter Benjamin thought the central feature of the modern was the crowd and Ishi, when brought to San Fransisco, was constantly stunned not by the buildings or technology, but by all the people. ‘. . . he laughed. It was simply the physiological effect of the crowd upon him.’[11]

The brain of Ishi, which was held at the Smithsonian Institution in Washington, was returned to California this week for a secret burial in tribal grounds . . . He was said to have been very keen that his language should be preserved, and pressed the anthropologists to work harder on the project, possibly because he was aware his time was short.[12]

Contrary to commonly-held belief, Ishi was not the last of his kind. In carrying out the repatriation process we learned that as a Yahi-Yana Indian his closest living descendants are the Yana people of northern California. [13]

[3] The Etiquette of Freedom: Gary Snyder, Jim Harrison, and the Practice of the Wild, Counterpoint Press, 2010.

[5] Ian Crouch, ‘“The Tree,” a book-length essay from 1979 on the impenetrability of the natural world by the novelist John Fowles’, September 24, 2010 https://www.newyorker.com/books/page-turner/fall-read-the-tree

[7] Genevieve Belleveau; as told to Sirin Kale, ‘My Love Affair with a Tree Taught Me to Express Myself Sexually’, The Guardian, Aug 16 2018.

[13] Robert Fri, director of the National Museum of Natural History, ‘The Repatriation of Ishi, the last Yahi Indian’, https://naturalhistory2.si.edu/anthropology/repatriation/projects/ishi.htm