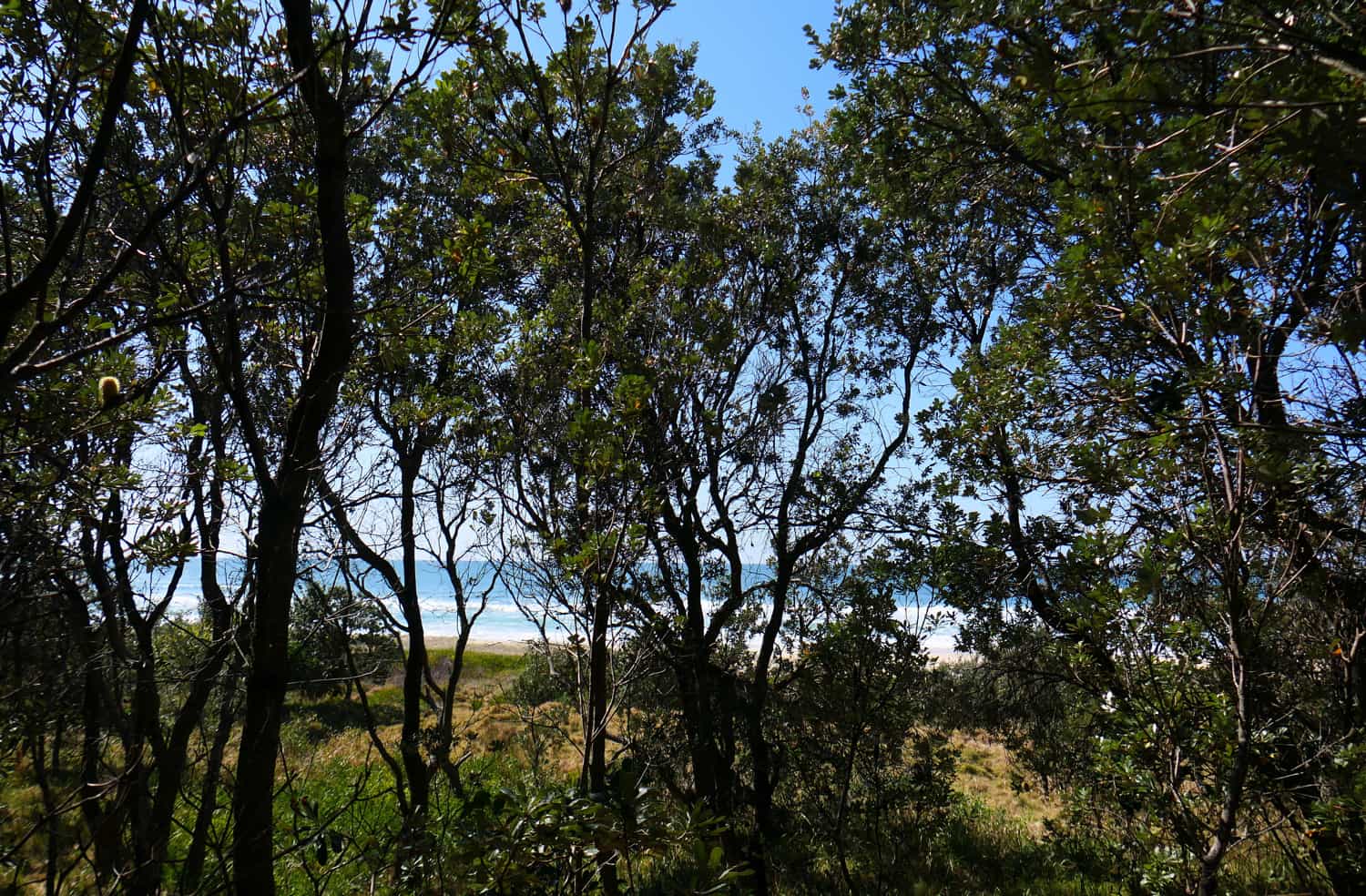 I am looking out through Jagun to the sea, the horizon is curved the world round. I can see 5 ks I’m told, but know it’s much further, the whole view is endless and empty of anything but sea.

Inside the forest an early Hyacinth Orchid is blooming. I think it’s Dipodium variegatum (the slender hyacinth-orchid), though Wiki says it flowers December-February. 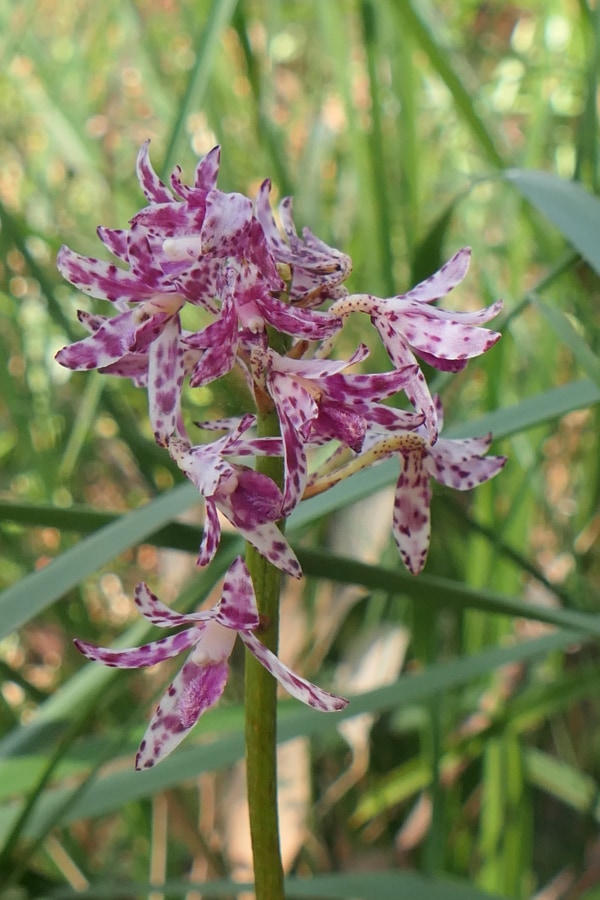 For most of the year, it lies dormant in a cosy mycorrhizal relationship with fungi of the genus Russula with no above-ground presence. All Australian terrestrial orchids rely on a specific type of mycorrhizal fungi to germinate and sustain their growth and many are pollinated by their own unique species of pollinator, usually native bees.

Australia has a higher proportion of orchids than any other temperate region of the world, with over 1700 species recorded. Yet regrettably, 25% of global orchid extinctions have occurred on our continent.[1] Our unique orchids represent a significant proportion of all threatened flora in Australia. All species have almost certainly suffered a decline in range and abundance through loss of habitat. Major threats to remaining populations include disturbance to or destruction of plants and habitat, weed invasion and grazing by feral animals.[2] I hope this one is safe. We find these beauties in our garden and in this forest every year. 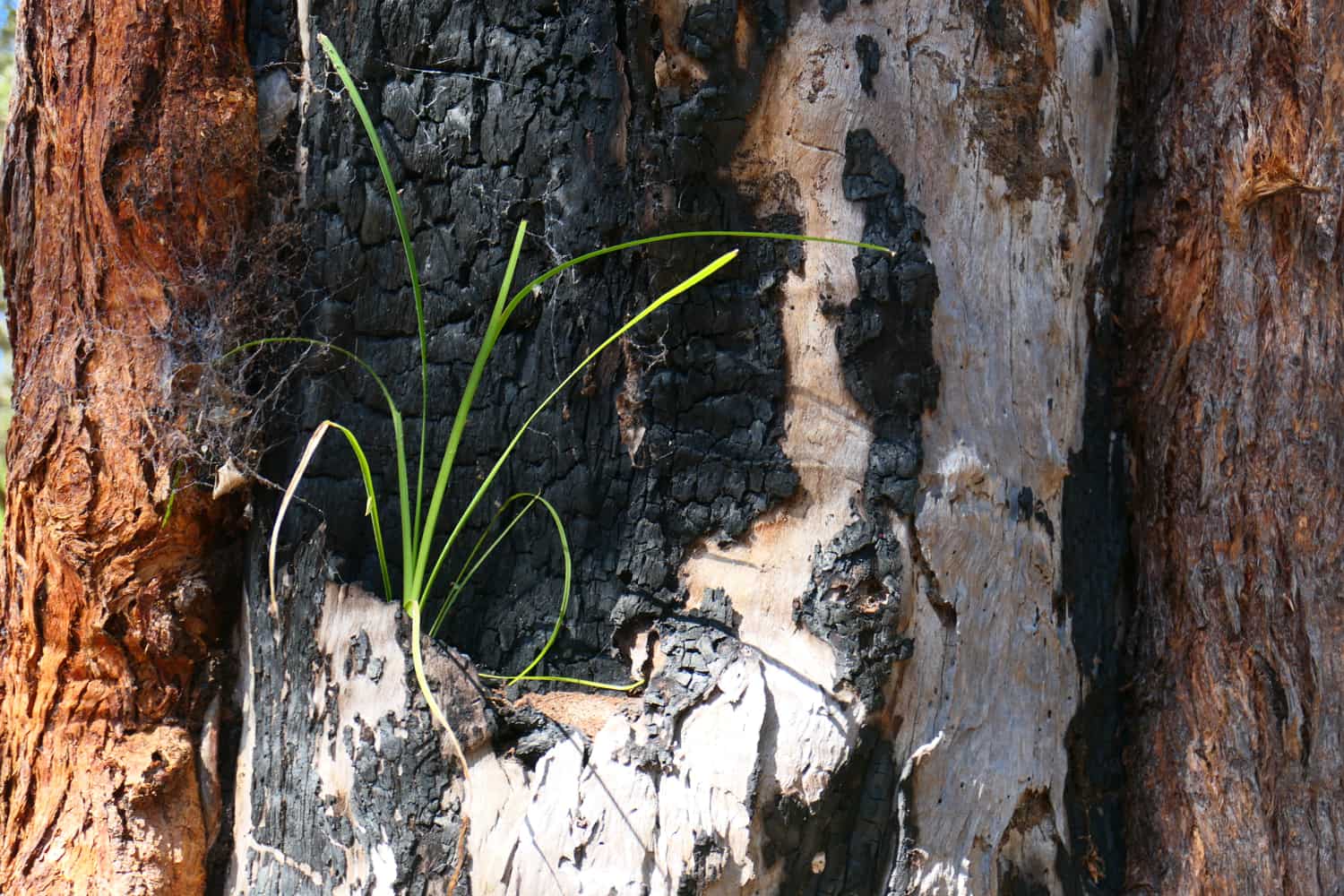 A Lomandra growing where it can, near Oyster Creek. Luckily, life is inventive and determined,

We spot a Whipbird roughing the leaf litter and in the Paperbark swamp (dry now), an Eastern Yellow Robin keeps us company for a while. They are common here, and are not under threat. Flame Robins are secure, but Scarlet Robins are listed vulnerable in this State. 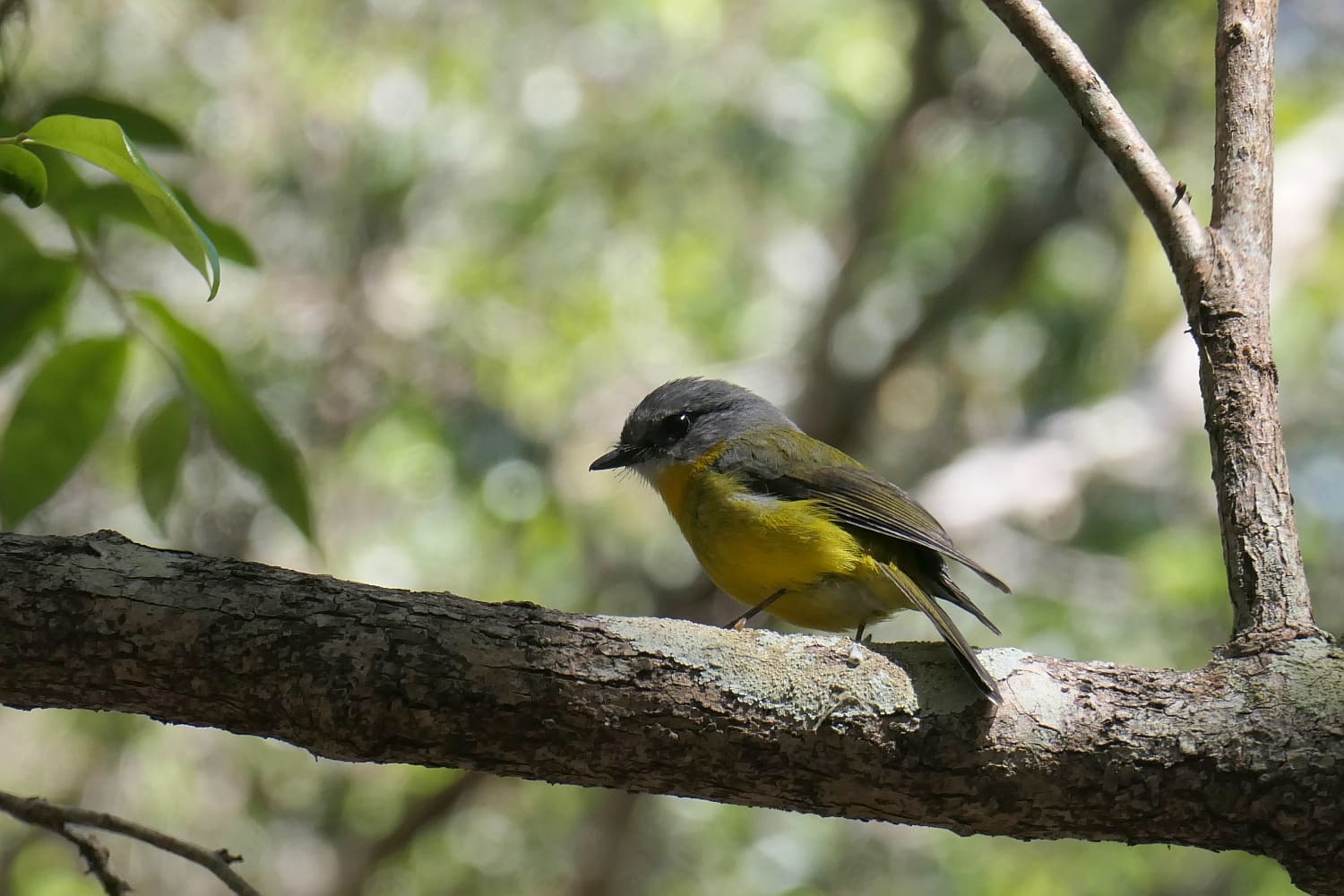 There are six or eight species of bearded dragons (depending on sources). They are not endangered luckily. We find this one across the road as we get back from the walk. It is an Eastern Bearded Dragon (Pogona barbata). They can change colour when threatened or to regulate their body temperature. 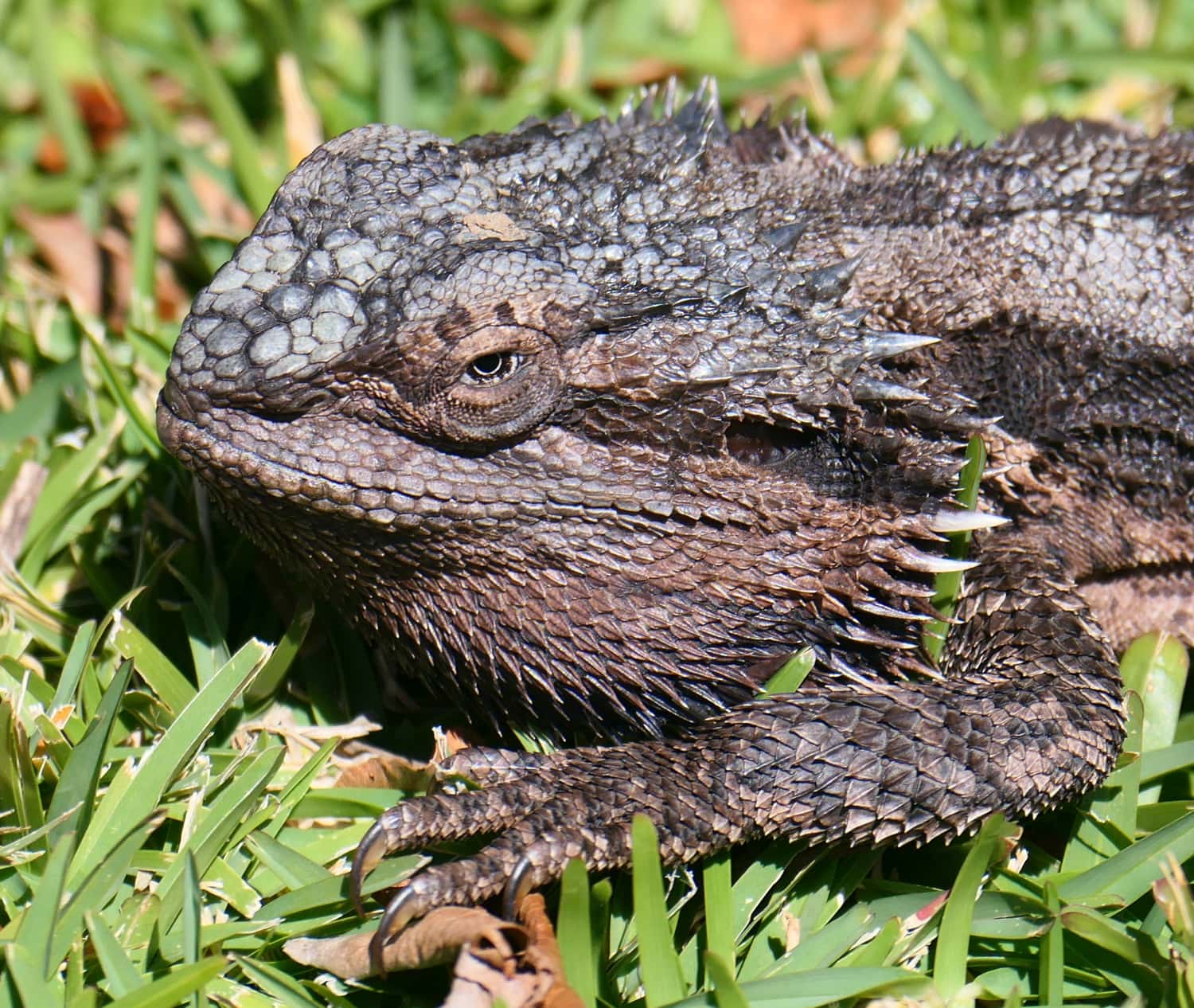 Bearded dragons – great survivors – belong to a type that branched off the common reptilian trunk around 250 million years ago, much earlier than the branch that led to the dinosaurs or birds. Of course, we find them useful as pets or laboratory specimens.[3]

And in our front garden, an introduced honeybee is feeding on a Spider Grevillea. Bee populations worldwide are suffering mainly from parasites (tracheal and varroa mites), pesticides (Fipronil being the worst), but also herbicides (which are used much more in farming and target a huge variety of wild plants that bees forage), drought, habitat destruction, nutrition deficit, air pollution, global warming and more.

Our native bees are under severe threat. Australia has over 1,700 species of native bees, vital pollinators for wildflowers and increasing the yield of many agricultural crops. 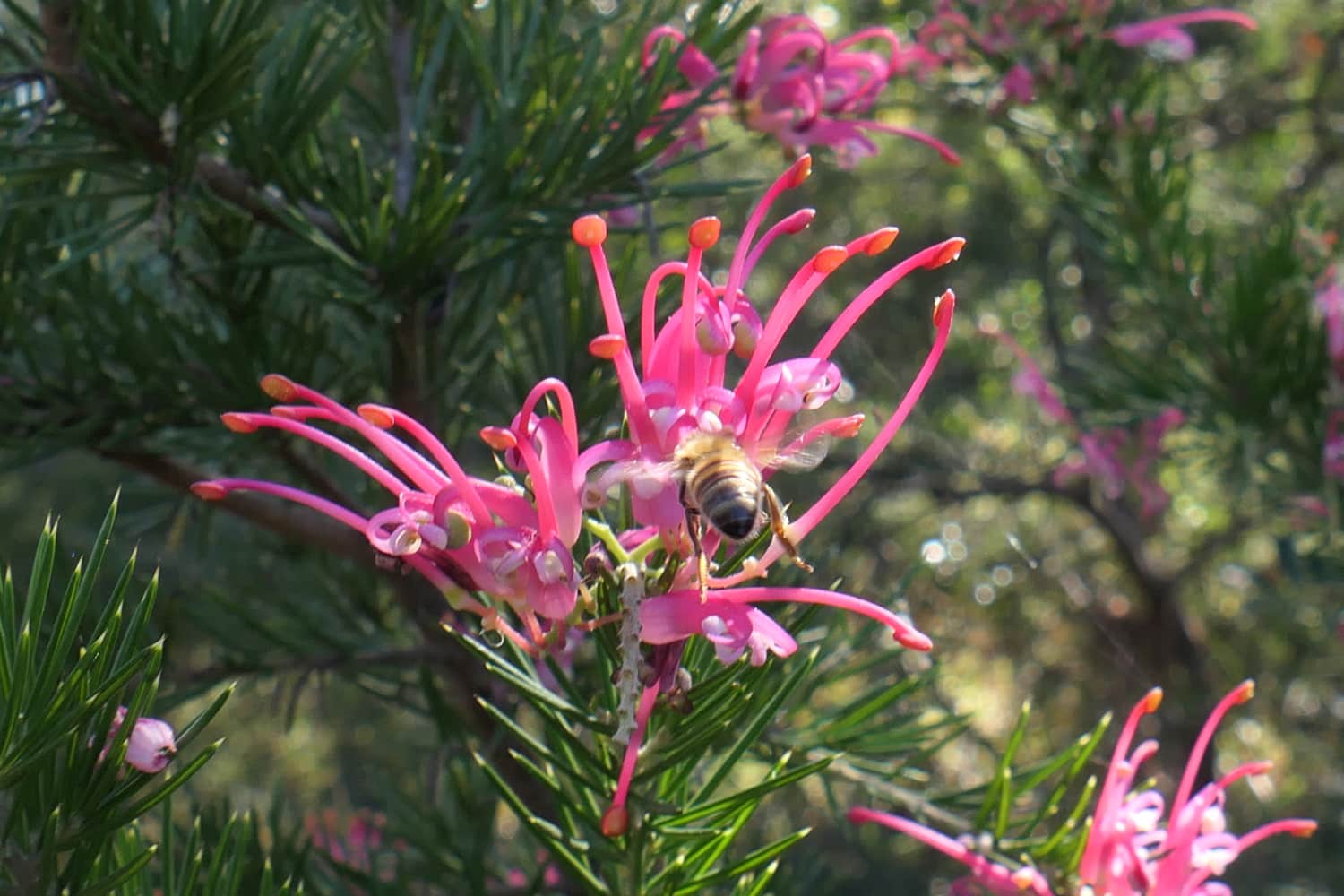 All species that co-evolved with us have the right to life. Today is a day to remind ourselves of that.

[3] ‘Scientists seeking the origins of sleep may have uncovered important clues in the Australian bearded dragon. By tracing sleep-related neural signals to a specific region of the lizard’s brain—and linking that region to a mysterious part of the mammalian brain—a new study suggests complex sleep evolved even earlier in vertebrate evolution than researchers thought. The work could ultimately shed light on the mechanisms behind sleep—and pave the way for studies that may help humans get a better night’s rest.’ https://www.science.org/news/2020/02/australian-bearded-dragon-may-hold-secrets-human-sleep 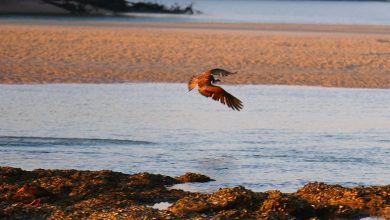