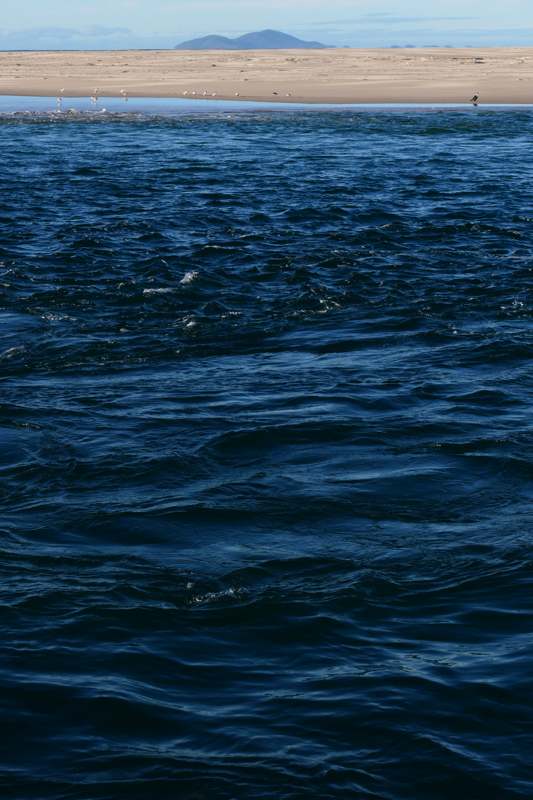 The morning’s still, cold-cast air is down to eight,
the river fast, shallow and soaked in beetle blue
puckers, skin sliding, colliding, currents breaking,
a sudden skitter of large fish, their urgent energy
scratching the surface with the sound of a bucket
of slops thrown out, a black shape, black sheen 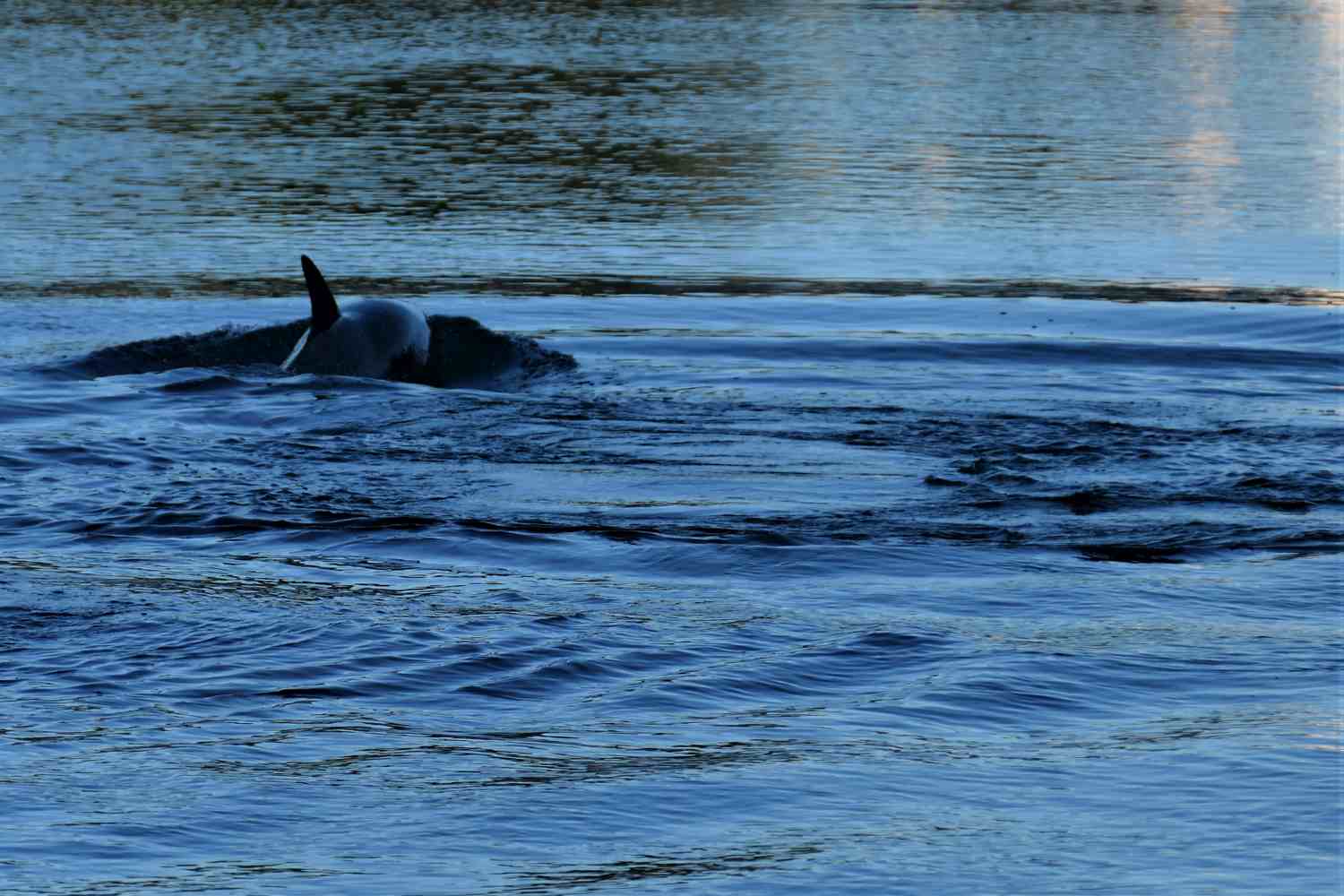 surfaces shoving a powerful bow wave, slips back
under, another follows, sea-panther, river-panther
thigh-sleek and as quiet, urging the surface up
against the current, two shadows webbed
from the subterranean world, four-legged
semi-aquatic animals evolving to mostly-aquatic
and finally to totally aquatic marine mammals
(“between two to five million years ago). 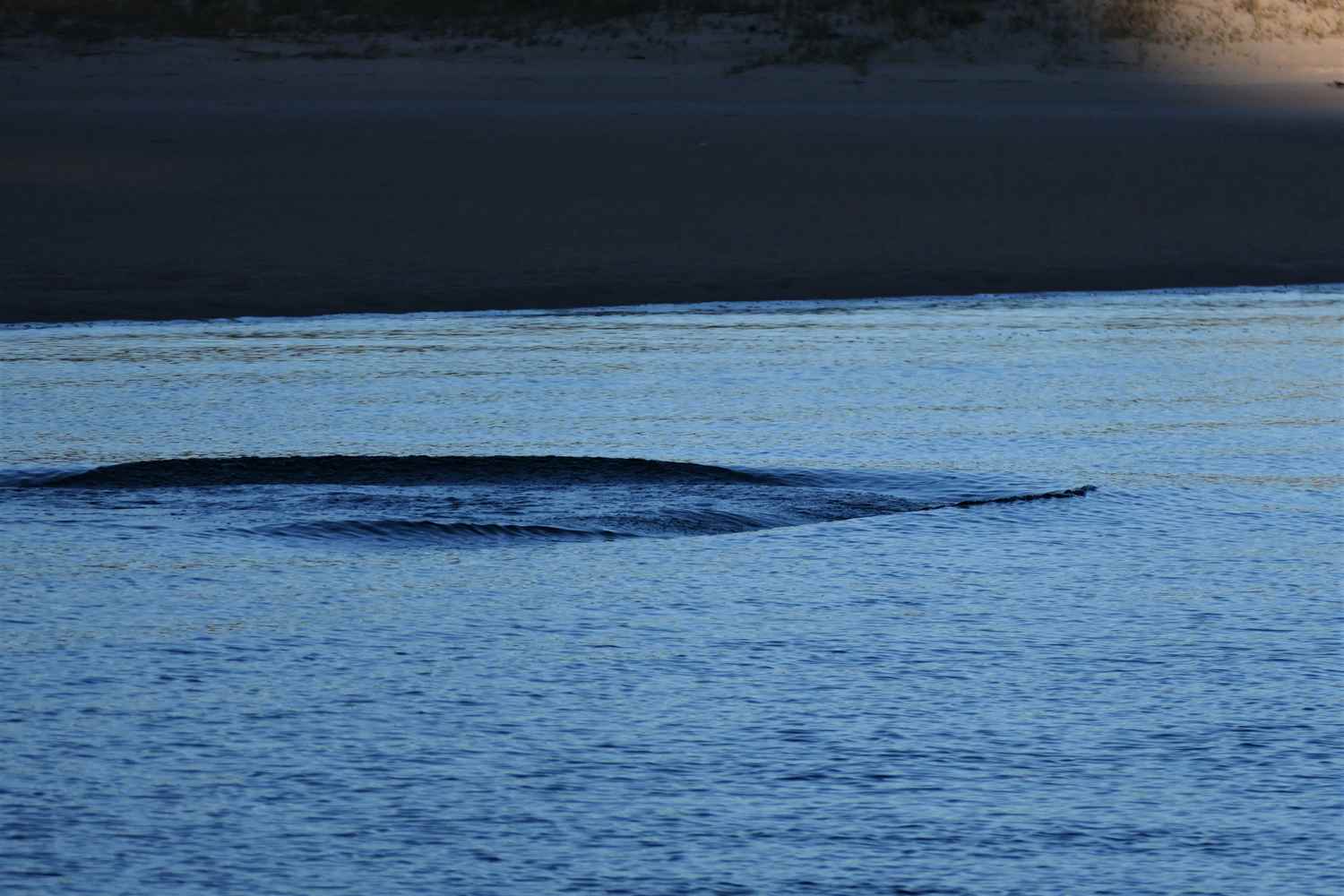 I think back to a night, still bright in Skye
surprised by a sleek, gleaming nuclear submarine
sliding south through the lounge window towards Rona.
These mammals are also other, bulky, more muscular
than you think, from technicolour memories of cousins
on the Gold Coast playing up to the paying public,
balancing multi-coloured balls, or was that seals? 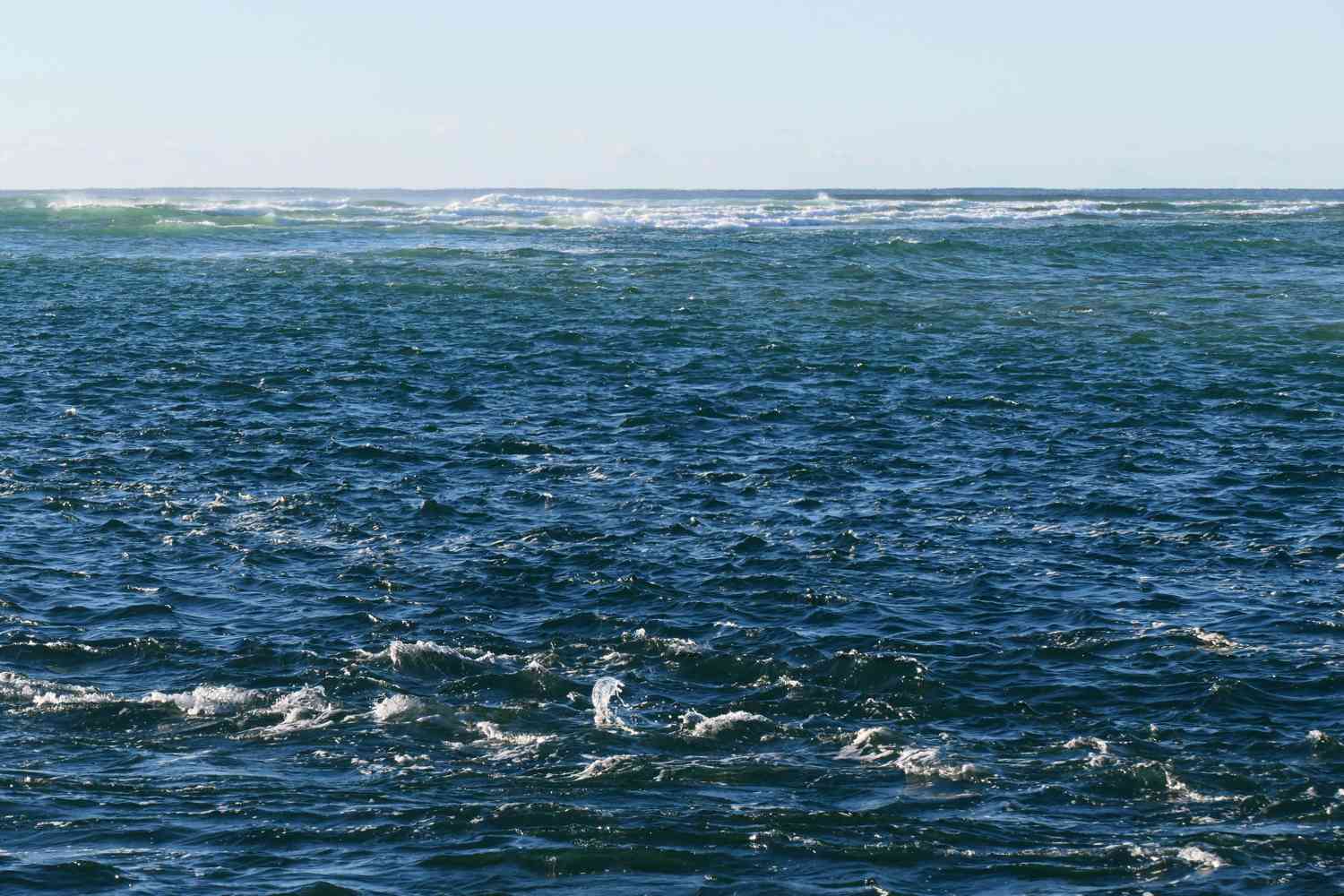 The dolphin is totem of the Gumbaynggirr,
tourist trophies, small plastic / china dolphins,
one in a glass dome with fallen snow, inhabit
indigenous graves in town, reminder of our vulnerabilities,
thin-skinned / white-skinned I wish I knew as much,
cared as much . . . 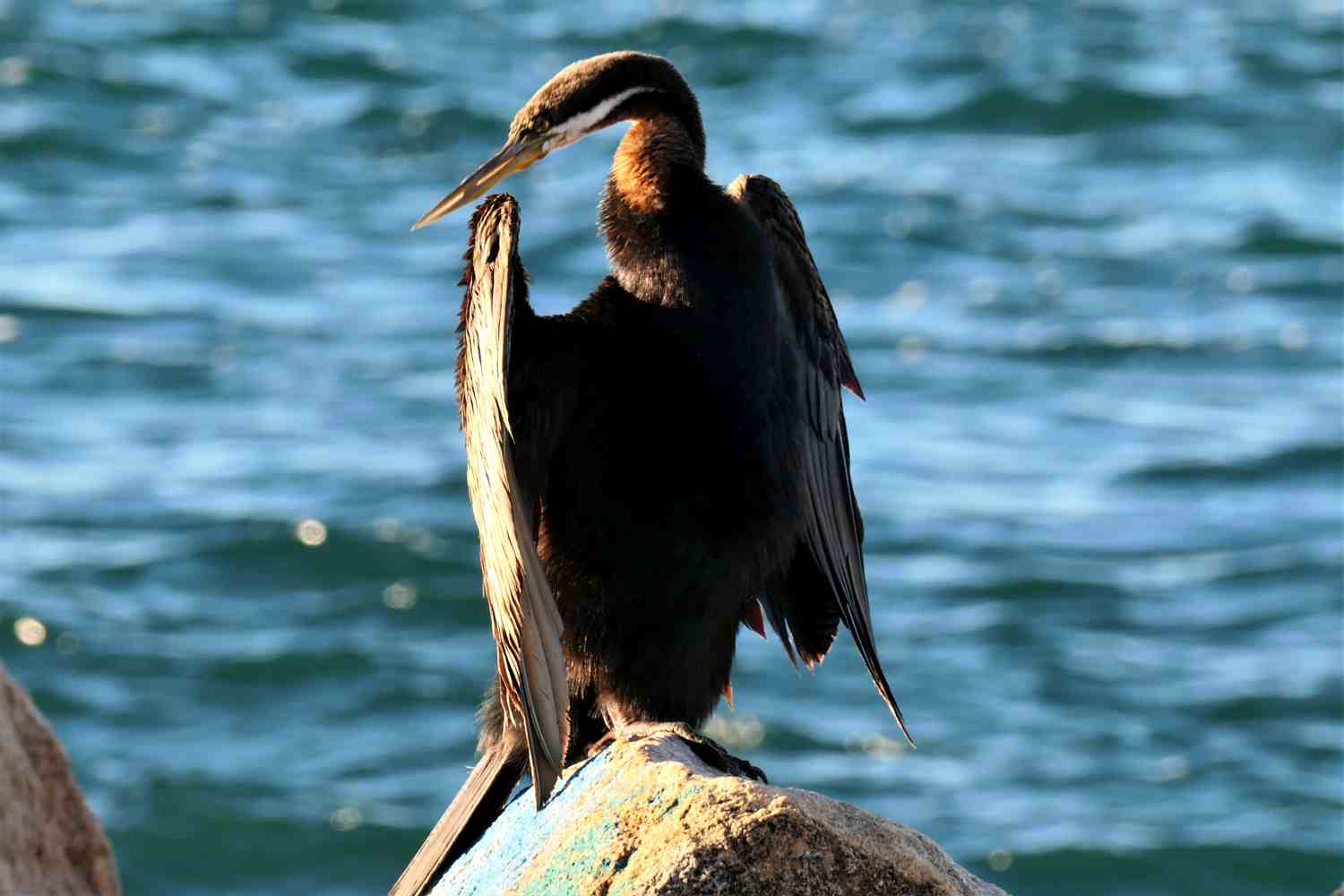 The darter must have had breakfast, is concentrating
on preening, cleanliness drilled into the family, a relaxed
performance for our entertainment. Bar-tailed Godwits
too young to migrate ten thousand kilometres, with wet
feet wet probe, smaller waders back to me are anonymous
even in this morning’s early flinty light .

The United Nations has proclaimed May 22 The International Day for Biological Diversity (IDB) to increase understanding and awareness of biodiversity issues.

Biodiversity is an awkward, dynamic, rich concept. My personal definition is: the continually changing array of life forms, the plants, animals and micro-organisms, their genes, the ecosystems they form and the processes they live by, in a unique, never to be repeated, evolutionary process that connects all life that share origins and biological systems and genes and an emergence from the energy and matter at the beginning of the universe. In addition they co-evolved with us in our home, planet earth, they are our cousins; we belong together and must share the precious opportunity of existence while we can.

However, biodiversity alone is insufficient for a sustainable and healthy environment going into the future. It neglects concepts such as abundance and commonalities within the diversity which show the amazing conformity of biological processes through evolution. 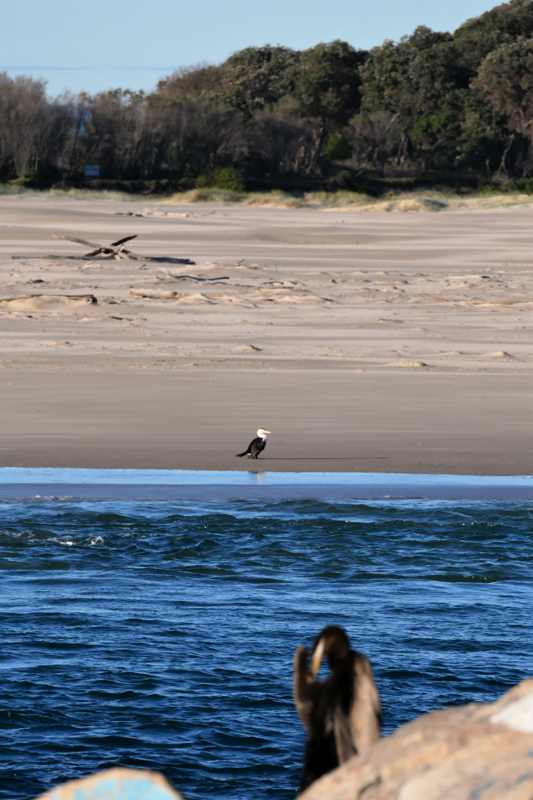 Motion: that Nambucca Shire Council undertakes to produce a Biodiversity Management Plan as a matter of importance.

Last year at this forum I expressed surprise that Nambucca Shire has no Biodiversity Management Plan. The Mayor pointed out that Council is busy undertaking various biodiversity conservation measures. A Biodiversity Management Plan would not only help Council to be more strategic and effective on a wide-ranging issue, but also be a way of getting the public involved. The problems are too large for Council alone to deal with. The public need to be educated about their role is protecting this beautiful region we live in.

May’s UN report on Biodiversity and Ecosystem Services, is a wake-up call. Up to 1million species are at risk of extinction, many within decades, which has severe implications for how human will be living in the future. It is easy for us living in this beautiful region to feel self-satisfied and ignore the crisis, but Australia has the worst mammal extinction record of the last 200 years and is the only developed country on a list of 11 global deforestation hotspots.

I ask you all to support a motion that Valla Beach Community Association ask Nambucca Shire Council to develop a Biodiversity Management Plan which includes a register of significant trees.
John Bennett, 26 Birugan Close, July 15, 2019.

On the way to the forest protest I passed large houses with huge gardens, not one biodiversity friendly. The Chinese pictograph for garden is a walled area isolated from wilderness and political, social demands. The word garden comes from the Old English geard, meaning yard or enclosure. A garden was an area separated from the house/hut and from wilderness. Wilderness is now a fraught ethnocentric concept (for indigenous peoples a ridiculous idea) and we have transformed, polluted, mapped all corners of the globe.

We forget gardens are rich reservoirs of biodiversity. For 30 years, Jennifer Owen recorded all the wildlife in her in her small English suburban garden. Beginning in 1972 she recorded 2,673 species of plants and animals, with four new to science.[i] Arne Naess, the founder of Deep Ecology wrote, ‘I have sat here in the eight-meter square garden and just tried to count all the thousands of plants that blossom there. The task is endless, and there is no need to wish to finish it.’ [ii]

Judith Friedlander and her team are creating a B&B Highway (Bed and Breakfasts for Birds, Bees, Butterflies and Biodiversity), a series of nest boxes, artificial hollows and pollinating plants in Sydney and coastal urban areas of New South Wales 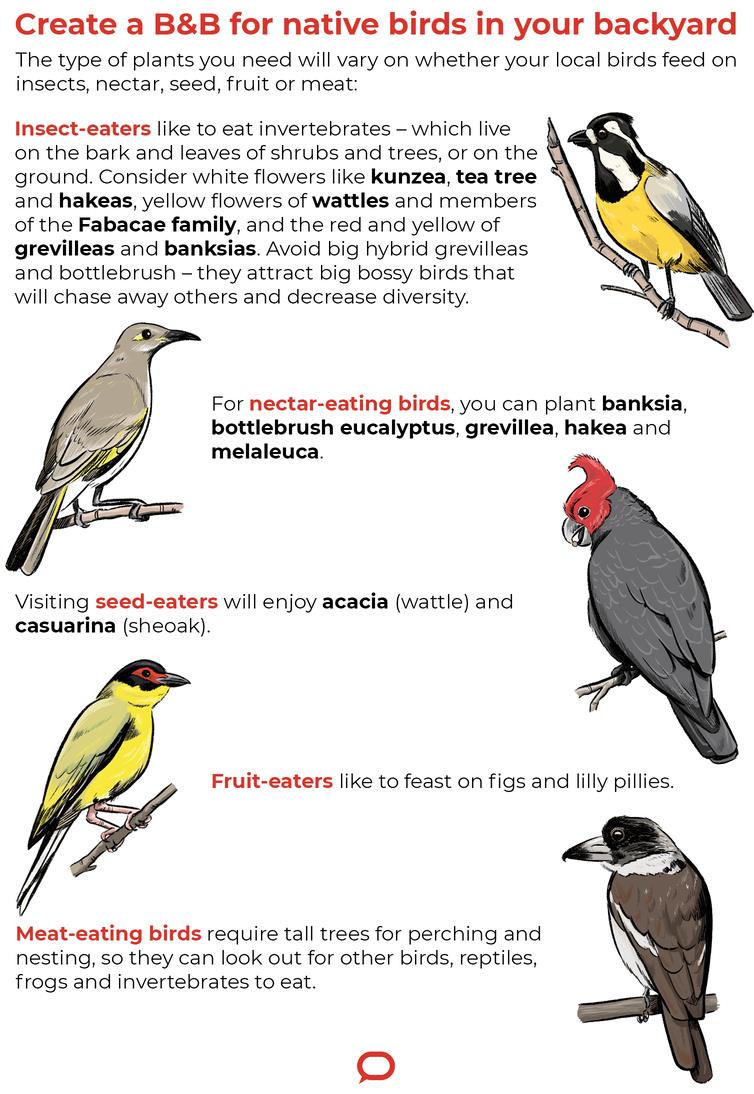 Wes Mountain/The Conversation Judith Friedlander, ‘B&Bs for birds and bees: transform your garden or balcony into a wildlife haven,’ The Conversation, 4 March, 2020.

Gardens are the way most children first meet nature’s riches face to face. David Malouf recalls his childhood with his grandfather: ‘Staked tomato-plants are what / he walks among, the apples of paradise.’[iii] In an age of passive, homogenous consumerism and at a time of lockdown, for those lucky enough to have a garden maintaining a garden encourages creativity, attention and intimacy with nature.

Yesterday I brought up the Apocalypse, and there is bad news in this regard. The north magnetic pole is rapidly shifting that could be a sign our planet is heading to a pole reversal. On average these reversals take place roughly every 250 000 years and one is overdue. The consequences for life on Earth are potentially devastating, some suggesting expanses of Earth will become uninhabitable from hits of ultraviolet radiation.

This strange behaviour has geophysicists puzzled and is causing technical disturbances in satellites orbiting Earth. Earth’s magnetic field is vital to life on our planet. It is a complex and dynamic force that protects us from cosmic radiation and charged particles from the Sun. The magnetic field is largely generated by an ocean of superheated, swirling liquid iron that makes up the outer core around 3000 km beneath our feet. Acting as a spinning conductor in a bicycle dynamo, it creates electrical currents, which in turn, generate our continuously changing electromagnetic field.[1]

There was a near miss in 2012 from an absolute super-storm that the sun let loose. This massive, once-in-150-years event happened to be released when the sun was facing away from our Earth. Had it been a week or two earlier, it would have been directly facing our planet and the forensic analysis suggests that we would have been sent back to the Victorian age in terms of our electrical systems had that happened.[2]

The United Nations has proclaimed May 22, The International Day for Biological Diversity (IDB) to increase understanding and awareness of biodiversity issues.

The pandemic is linked to climate change.[3] The one person is making the world sit up and take notice is Greta Tintin Eleonora Ernman Thunberg.

In August 2018, at age 15, she started spending school days outside the Swedish parliament to call for stronger action on climate change, holding up a sign reading Skolstrejk för klimatet (School strike for climate). Soon, other students engaged in similar protests in their own communities. Together, they organised a school climate strike movement under the name Fridays for Future. After Thunberg addressed the 2018 United Nations Climate Change Conference, student strikes took place every week somewhere in the world.[4]

She’s quite a phenomenon! I am amazed by the way she has this completely unconventional way of being totally convincing. You are right; she has a way of reversing the generational order, saying that the children are the wise ones and the adults are the unaware kids. It is the clearest example of how the issue of engendering occupies all our mental space and is invested in all our affects. You are too young to remember, but not so long ago we had ‘future generations’ that had to be protected, and they were, precisely, in the future, even the distant future, that was the main problem. Now they are behind us, in the street . . . Bruno Latour on Greta [5]

Now that we are so cut off from being in natural environments, from natural ways of getting food, moving through the landscape, even playing , aesthetics is a way for urban consumers to value ‘Nature’; vital floating in a global environment of eco-meltdown and pandemic lockdown. Your garden becomes important, the remnant bushland near you, time you spend in the bush, and arts that work with nature.

The walk through the forest finds a quietness, near the creek some Thornbills, Yellow-faced and Lewin’s Honeyeaters and for the first time, a distant ring of Bellbirds, beautiful and dangerous. The water has stopped flowing, is thin on the ground. I expect more, try to capture the pads of light balancing each corner of a square, moving up and down and diagonally like chess pieces, but none of the five shots work. 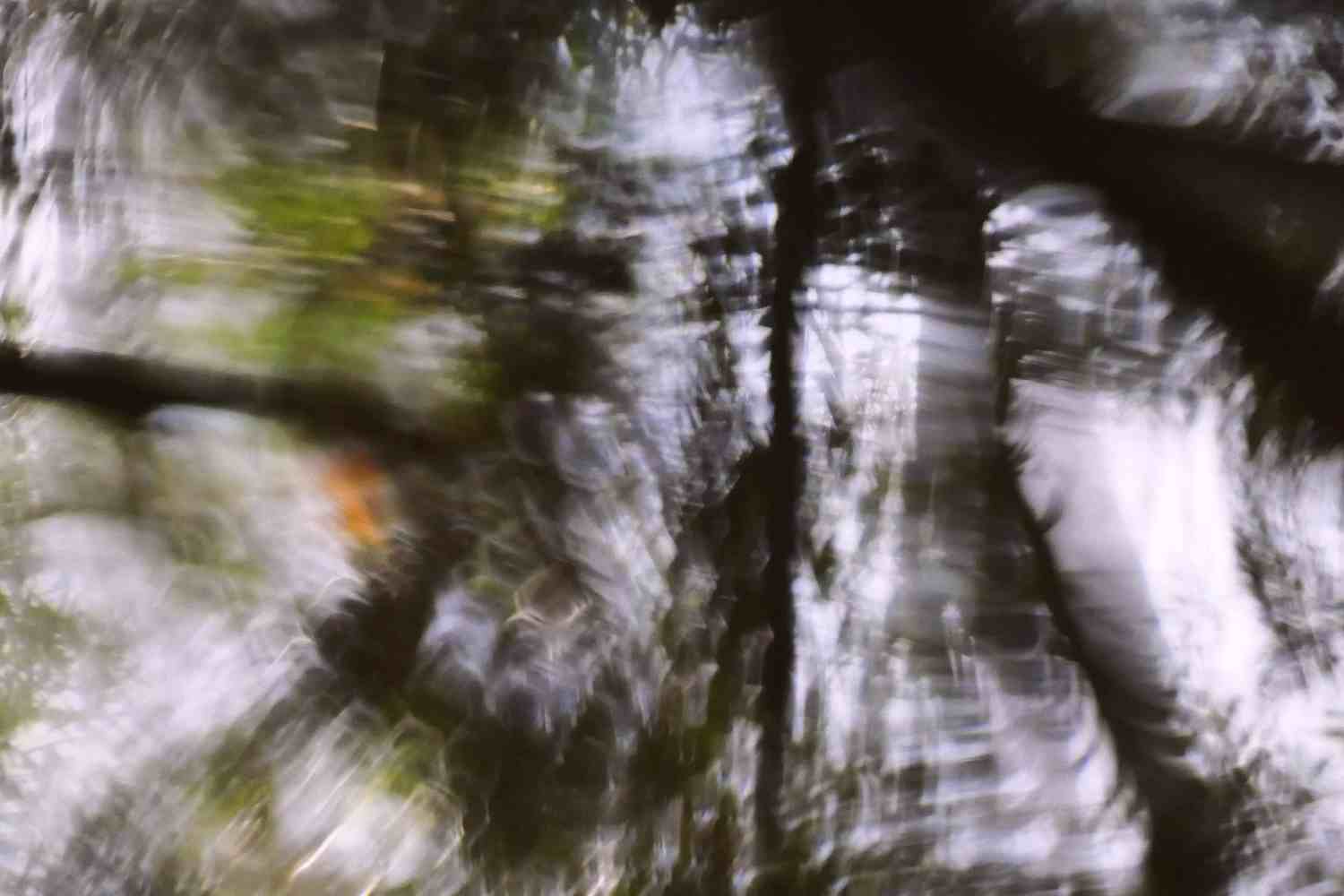 I expect less, but the fallen giant has worlds within worlds, green islands almost urban, and 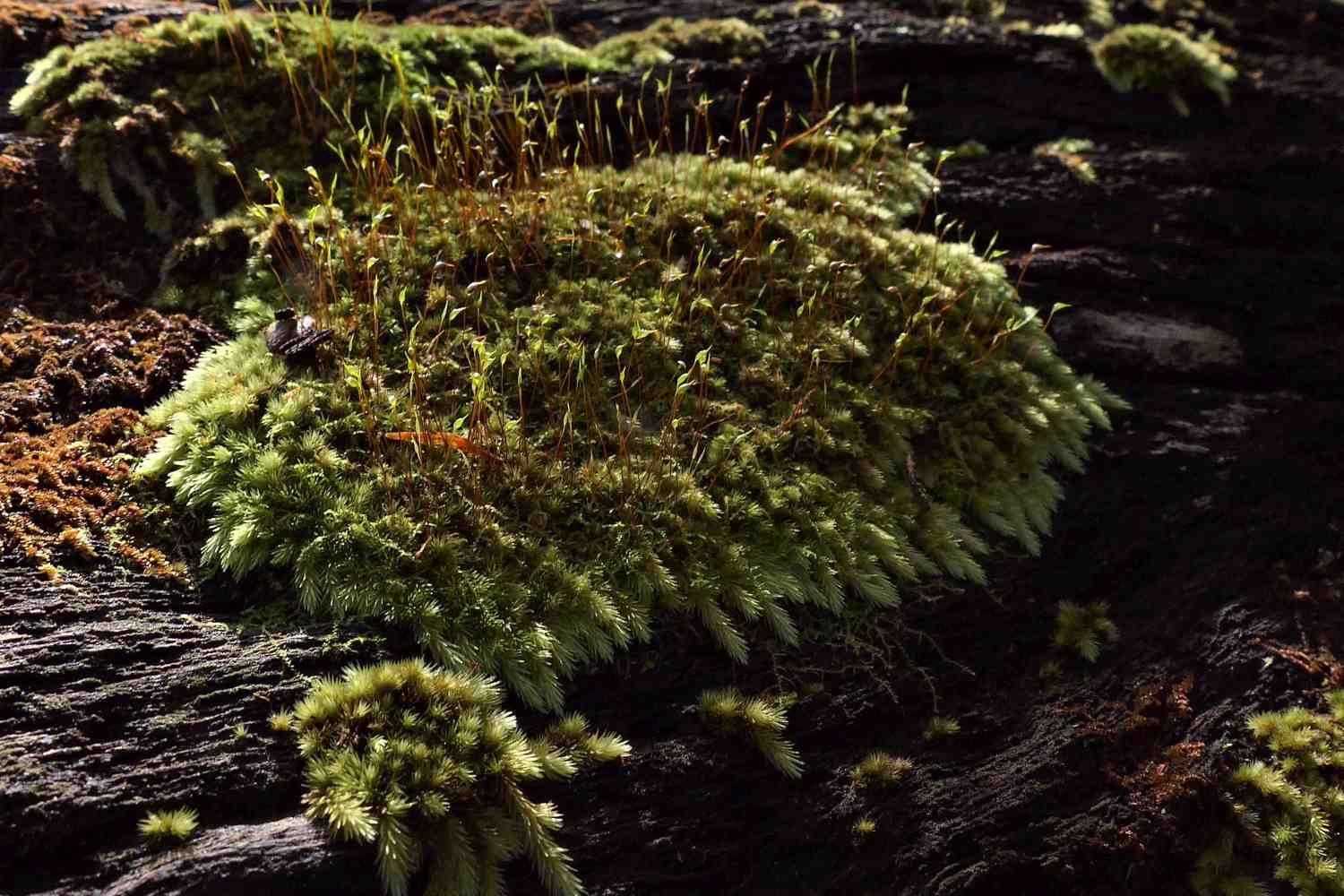 the pale body of Black Wattle painted in delicate shades of lichens (marvellous friendships between fungus and alga or a cyanobacterium). 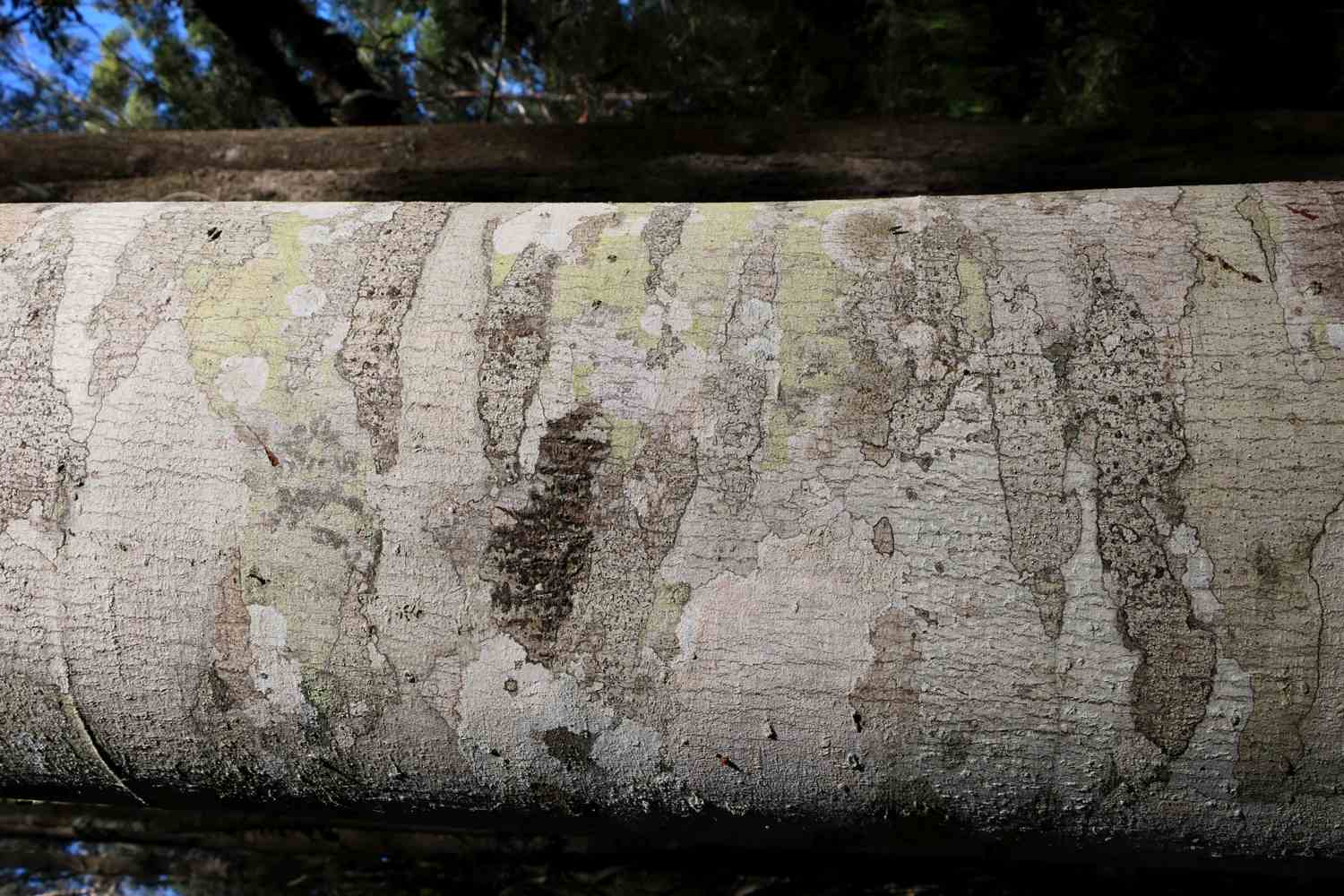 The dead are finding new forms. 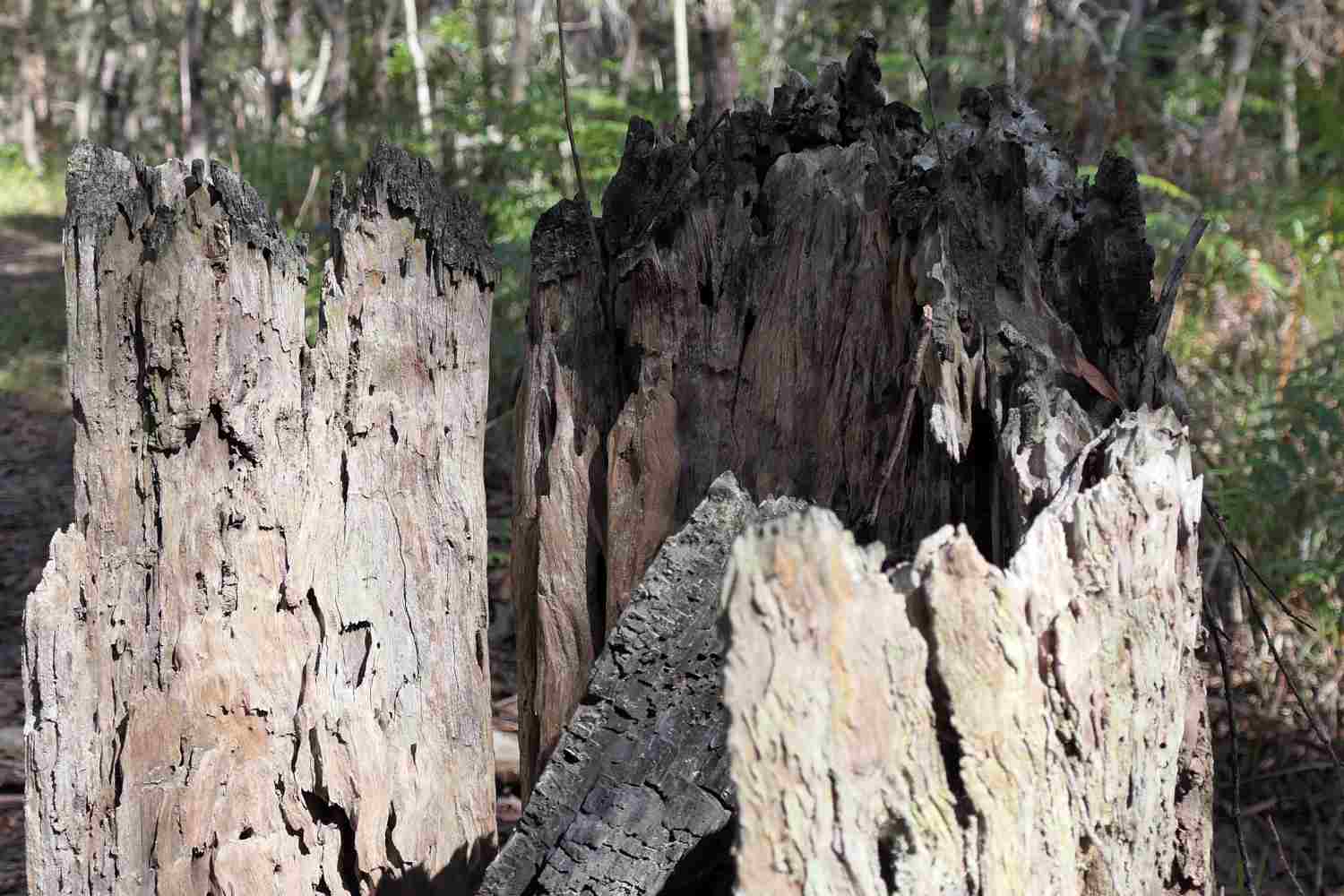 I expect more after the rains, than these two inedible giants and one other. 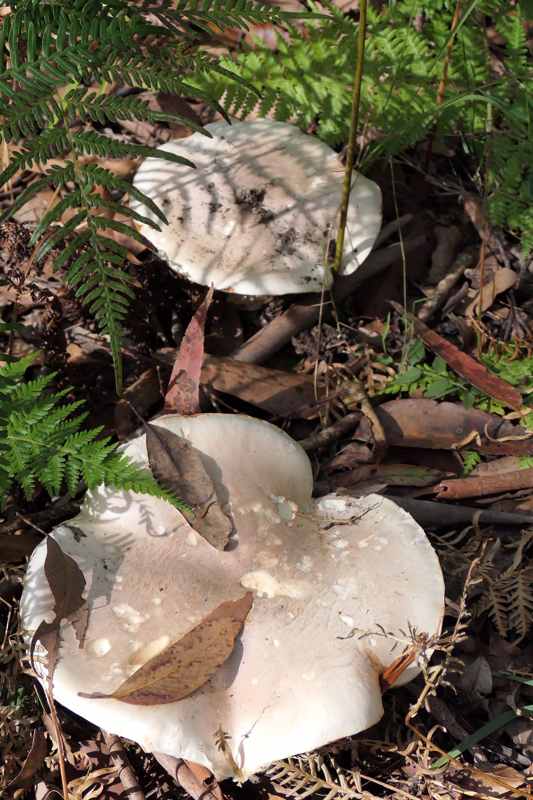 I expect less, the orchid is still flowering for max effect, with two buds yet to strip, even the green stem is flecked, a design masterclass. 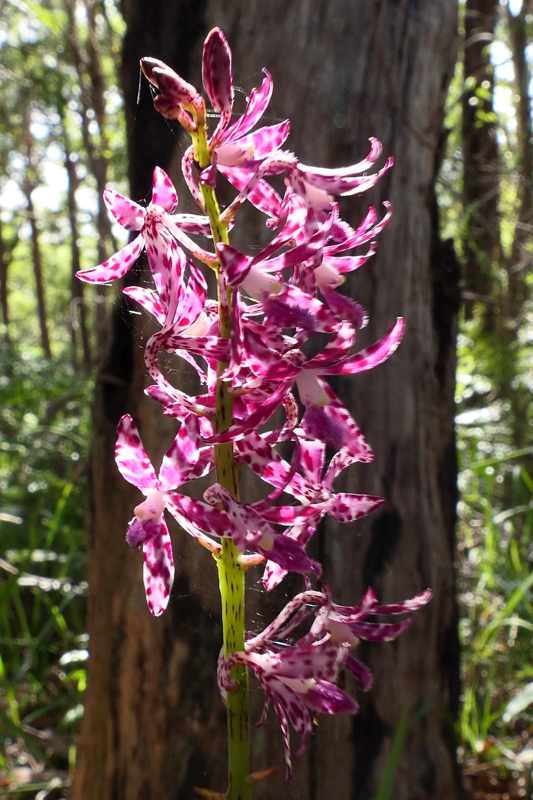 I expect less, the Evening Brown settles in a strategy lost in the carpet, a culture of camouflage. I expect more mosquitoes, not one, the cold is working. 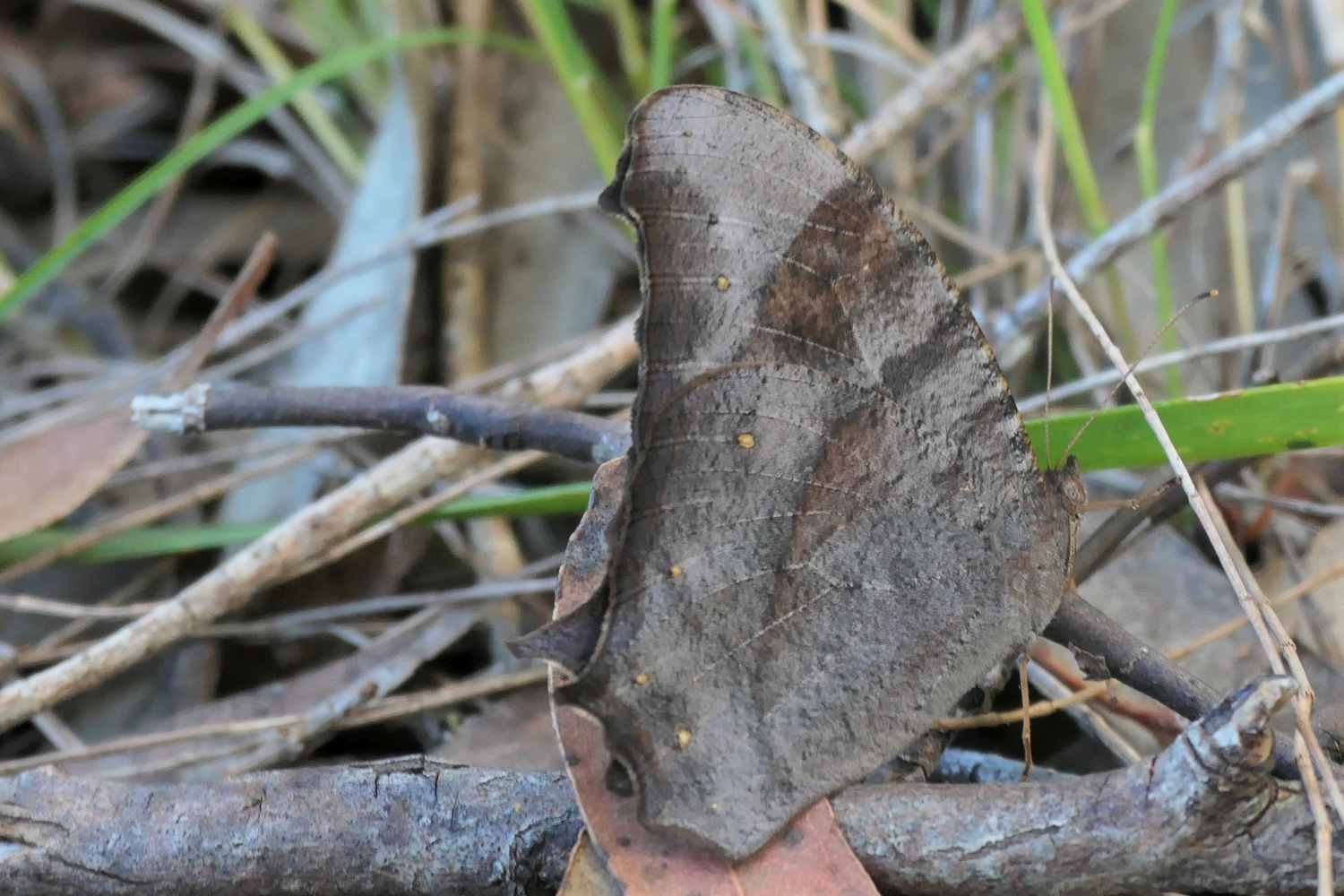 I expect more, the kangaroos haven’t visited us for a few days now, but Lemon Migrants are still flouncing through the garden – what a wonderful year for butterflies.

I ring mum, she has had problems getting her new ipad to connect, is very frustrated. I said that’s common, but once connected it will be easy. Be patient. I am worrying about her more and more under this lockdown. 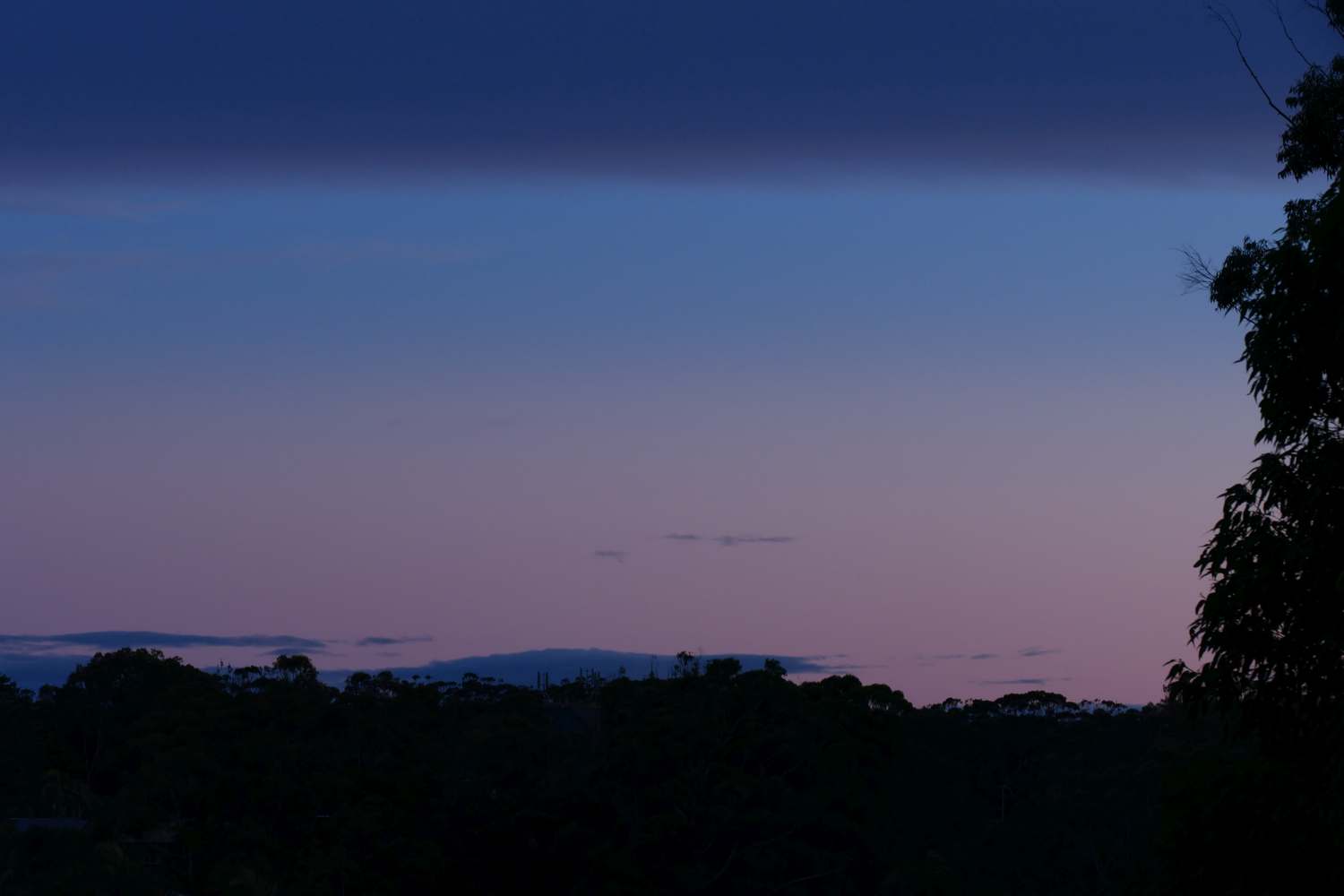 The novelist and essayist Marilynne Robinson asks. ‘What have we done with America? Over the decades we have consented, passively for the most part, to a kind of change that has made this country a disappointment to itself, an imaginary prison with real prisoners in it. Now those imaginary walls have fallen, if we choose to notice. We can consider what kind of habitation, what kind of home, we want this country to be.’[6] The same opportunity is available to all of us (if living in countries not facing famine, civil war, abject poverty, disease etc.) now that all the walls have fallen, can we escape?

[3] ‘IT IS AN invisible, deadly menace. It’s causing almost unfathomable economic destruction. We knew it was coming, but were caught woefully unprepared. It tricked nations into blaming one another—the US being the primary antagonist—instead of working together to stop it. It is the novel coronavirus SARS-CoV-2, and it is climate change. The two are intimately linked.’ 21 April, 2020, https://www.wired.com/story/coronavirus-pandemic-climate-change/

[i] Jennifer Owen, The Ecology of a Garden: The First Fifteen Years, Cambridge UP, 1991.

[ii] David Rothenberg, Is It Painful to Think? Conversations with Arne Naess, Minneapolis: University of Minnesota Press, 1992. His mountain hut was a three-hour steep hike through tundra from the nearest train station.