Arts in the Garden, Coffs Regional Museum, 14th May

Postponed from 14 May when Cook passed by the area now known as the Solitary Islands Marine Park. He noted ‘heavy squalls attended with Rain and hail’ and that’s what we got – without the hail. 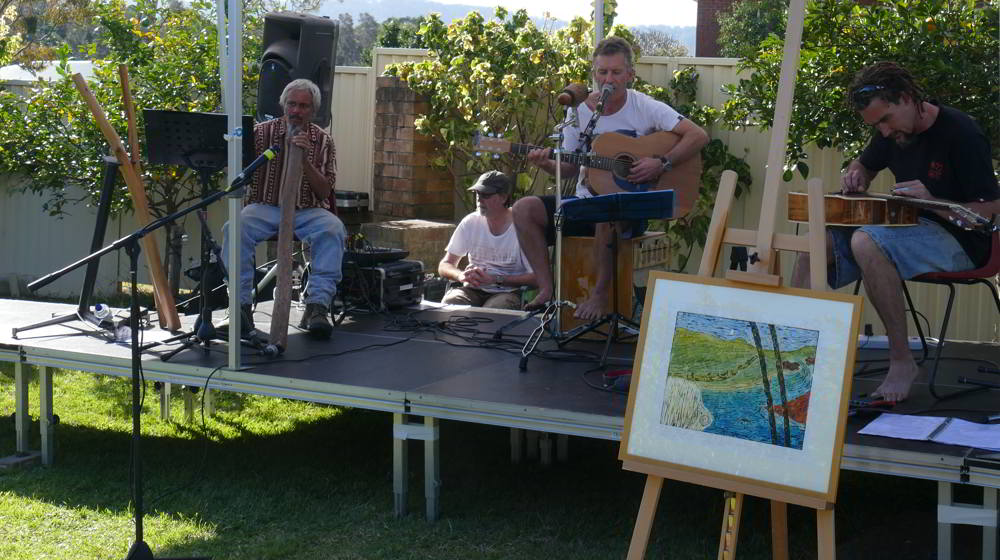 We got wonderful weather this time. Uncle Mark Flanders gave us his impassioned welcome to Country. I was MC and read extracts from a poem I was commissioned to write about encounters – based on Captain Cook’s voyage up the East coast of Australia. It has ventured outwards into 27 pages.

There was the unveiling of Wyn’s new print. She was commissioned to make a linocut to commemorate Captain Cook passing by. I will join other voices in celebrating the rich history and present wonders of  with 60% Water – Hamish Malcolm has written songs based on some of the oral history stories from the project, with Art Schultz on guitar and Uncle Mark on didge.

For the original project see here.

Extract from my poem: Employ’d as a discoverer: Situating the Endeavour’s voyage

To set the scene –

The Empress of Russia wanted to meet
the farm labourer’s son who climbed
Roseberry Topping’s jagged edge to see
the sea and from the Jurassic sandstone cap
on the edge of the Yorkshire moors
watch Whitby Cats, working colliers
sail back and forth to London.

He showed promise and patrons noticing
that promise sent him to school, then
apprenticed him to a shipbuilder.
He first sailed in the Freelove, a Cat,
a common cargo ship bustling through
the rough churn of the North Sea.
After eight years he was offered a ship,
instead, he headed south to London
to join the Navy as an able seaman.

Eventually he became Lieutenant and was given a Cat renamed the Endeavour and refitted to sail into history.

Failing to measure the Transit of Venus accurately in Tahiti, Lieutenant Cook opened his sealed orders – to search for Terra Australis Incognita, and – [quote] ‘with the consent of the natives take possession of convenient locations in the name of the King.’ Cook set course for Van Diemen’s Land which Abel Tasman had chanced on. Cook was a master navigator, superb map maker and a good decision maker, but gales threw them north.

I quote from his journal. April 19, 1770:
I have named it Point Hicks, because Leuit Hicks was the first who discover’d this land.

Zachary Hickes was Cook’s second-in-command. Having sailed west
from Europe they left Greenwich time behind, so it was the 20th of April
and Point Hicks is mythical, has never been found. Possibly Cape Everard,
which on the sighting’s 200th anniversary was changed back to Point Hicks
but that means his latitude and longitude were way off, improbable for Cook.
The first European sighting of Australia’s East coast was probably a trick of the light.

The Endeavour’s voyage is an incredible story with so many ramifications that I got carried away writing a long poem. Cook was an amazing man, but this first voyage of his had unforeseen consequences for the Pacific and Australasia.

Coffs Harbour Regional Museum here in the former courthouse and police station, built in 1906. There were even home-baked cakes and biscuits using recipes from Mrs Tulk (the Lighthouse Keepers’ wife’s) personal recipe book.