What you need to know about getting a hair transplant in Turkey. The Independent, Sponsored.

Covid-19 makes clear that the health of Palestinians is intrinsically linked to their liberation. London Review of Books [1]

How do we avoid the dreaded second (third or fourth) coronavirus wave? ABC

Hopes of swift recovery in tatters. Britain’s economy is collapsing at an unimaginable pace alongside record falls in business activity around the world and spiralling job losses, according to closely watched surveys. The Times

Every other house in our street has people standing, some with flags, candles. It’s called the driveway Anzac Day. The Last Post echoes faintly, a cuckoo calls.

About half the street is up at the end of their driveways, some with candles and Australian Flags. We stand still in the thickening light as the last post is played. Wyn made Anzac biscuits and wrapped them with a gum leaf. We distributed them, met some new neighbours who have just moved in. 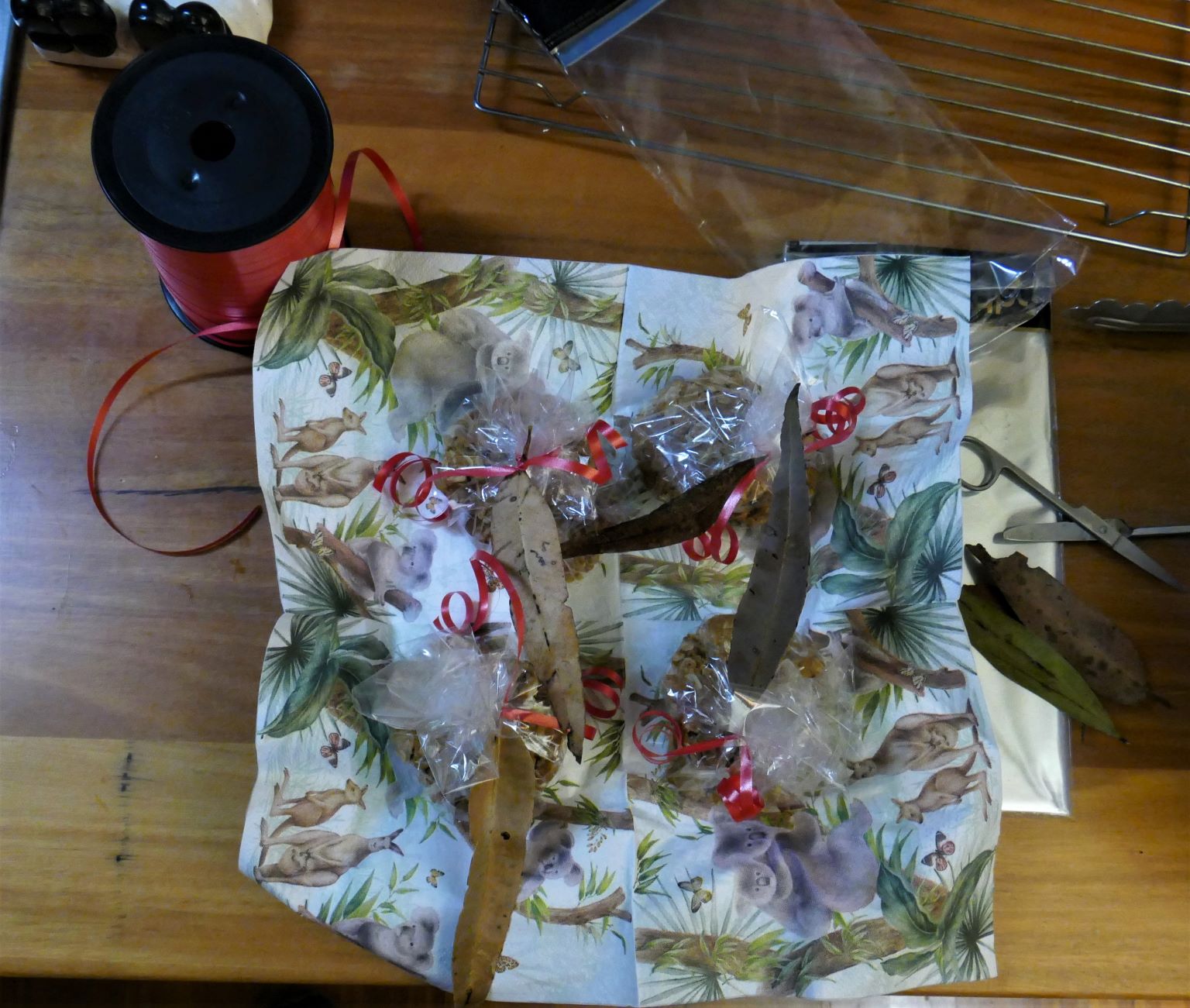 I hate war and war mongering and war celebrations, but pay my respects on Anzac Day for all those young me, who died needlessly. What we forget is that there is ongoing conflict, that violence never ends, that Australia still has troops in Iraq and Afghanistan. I was Sydney convenor of Poets Against the war back in 2003. We sent 10,000 poems to John Howard – that didn’t stop the war.The issue of Anzac Day for me (apart from the fact that war is awful ) is that the Turkish deaths are forgotten, and as all the other deaths in that ‘War to end all wars’. War and death should not be a symbol of the Australian spirit.

The most widely believed myth is that it was a mainly ANZAC affair. In reality the ANZACs were an important but relatively small part of the entirety. The British had contributed 468,000 in the battle for Gallipoli with 33.512 killed. 7,636 missing and 78,000 wounded. The French were next most numerous in total numbers and in casualties. The Anzacs lost 8,000 men in Gallipoli and a further 18,000 were wounded. [2]

Anzac Cove was a sideshow one of many ‘theatres pf war’ that spilled across the globe. Passchendaele, one campaign on the Western Front, collected the deaths of 325,000 Allied and 260,000 German soldiers. Who knows of the Balkans theatre (over 380,000 dead), the Caucasus campaign (440, 000 casualties), The Persian Campaign (2,000,000 civilian deaths due to war related famine and disease), the Macedonian front (over 300,000 casualties),fighting in German New Guinea, the Falklands, the Zaian War, the Togoland Campaign and more ???

Interested in what happened at Gallipoli? A potted history:

The uncritical and self-serving embrace of the Anzac legend by both sides of politics has serious implications for Australia’s future. [3]

British General Birdwood admitted to Lord Kitchener, Secretary of State for War, that, although ‘my men are A1 in attack’, they are ‘curiously callow, and negligent, and the only thing I fear is a really heavy night attack … as I cannot get the men to bestir themselves and hurry up to repulse an attack at once’. The Australians were usually distinguished by boldness in attack, the British by discipline in retreat.

The landings at Anzac Cove in April were a mile north of those intended. Whether strong currents were to blame, errors by Lieut. Commander Waterlow, the British naval officer directing the landings, or even a late change of plan by Generals Birdwood and Throsby, remains uncertain to this date. Yet the initial landings were successful, since the Turks did not expect them, and two parties of Australian troops under Captains Lalor and Tullock fought their way inland. Lalor was a scion of an old English military family, who had deserted from the Royal Navy, fought in revolutionary wars in South America and then sailed to Australia to enlist in its army.

Lalor ordered his men to dig in on hill Baby 700 but they were reported by a scout sent to check on their progress to be ‘smoking and eating as if on a picnic’, one soon interrupted by a murderous Turkish counter-assault. The Australians then counter-attacked up the hill against massive odds and Lalor, wielding an old family sword, was killed with many of his men. An hour’s picnicking exacted a heavy price. Nearly all the Anzac units were handicapped by razor-sharp cliffs and deep ravines, unsuspected since they landed at the wrong beaches and had the wrong maps. They also faced the most able and determined Turkish commander in Kem al. [4]

“This game gets very sickening. I get fits of rather severe depression at times. It all seems so hopeless and endless and sordid.’’ Wrote Richard Casey in his diary and years later, “We had no idea why we were there.’’ Any of the above remarks by Casey would be a more truthful evocation of Gallipoli than the myth depicted on the Pine Ridge statue [‘Every Australian loves the Mehmetçik [Turkish soldiers] as their own sons. His bravery and his love of country and humanity have immensely impressed the Anzacs.’] Fighting war creates a radically different set of imperatives to those elicited by remembering war. Returned soldiers struggle to forget the horror, and have to reconcile the suffering and loss of life, while their fellow citizens reach for stories of friendship to redeem the humanity of loved ones who fought.[5]

Quite apart from bullets and shells, lice and flies, together with poor food and water shortages, contributed to acute dysentery – the Gallipoli Trots, which affected three out of four Allied troops. Dental disease also became acute. Australians suffered severely from these scourges, partly because they were generally less rigorous in hygiene routine than the British or New Zealanders and partly because they bathed frequently in the contaminated sea. The British, held by the Australians to keep their towels dry, may have benefited for once from aversion to water. . . . Turkish total losses were about 300 000. Estimates of the British and Dominion losses lie between 198 000 and 215 000, with something like 46 000 dead. [6]

The above reveal national stereotypes have some truth. Poms don’t wash, the ocker spirit, etc.

I saw Alan Seymour’s play, ‘The One Day of the Year’, late, in the nineties. Hughie Cook helps his girlfriend Jan write an article critical of the Anzac Day tradition (from the dawn service to the aftermath, puking up in the street from all the grog). This angers his father Alf, an ex-servicemen. I thought it gave both sides a fair go. Banned by the Adelaide Festival in 1960, it was staged by an amateur theatre group. It was written in 58, one year he had goen into Sydney for an Anzac Day morning and returning home later was distressed by the sight of drunken men brawling and vomiting in the street. Seymour received death threats.

Of course, I wouldn’t be here, without George’s death:
I expect I shall be going up with the Ammn to night,
It is indeed the worst Battle Front I have been on . . .

I am longing to be with you & to comfort to love and to
cherish you, no matter how long we have to be apart,
you will always have a good true lover, & if God

He missed perhaps the worst battlefield in the whole war, dying on the very eve of  Passchendaele. I have his pennies buckled and torn.

Yesterday I received your long letter of the 31st July.                    Teilhard de Chardin,1917
It was on the same day I think, that I was putting into my letter
. . . death RELEASES, and if there were no deaths
The earth would doubtless seem a STIFLING place to us.

Wyn is on the phone to a friend, ‘yes, but I had no Golden Syrup, but Aussies make do’, and laughs.

Our amphibious strategy is to try and save as many as tadpoles we can, feed old celery leaves micro-waved, though they much prefer lettuce. 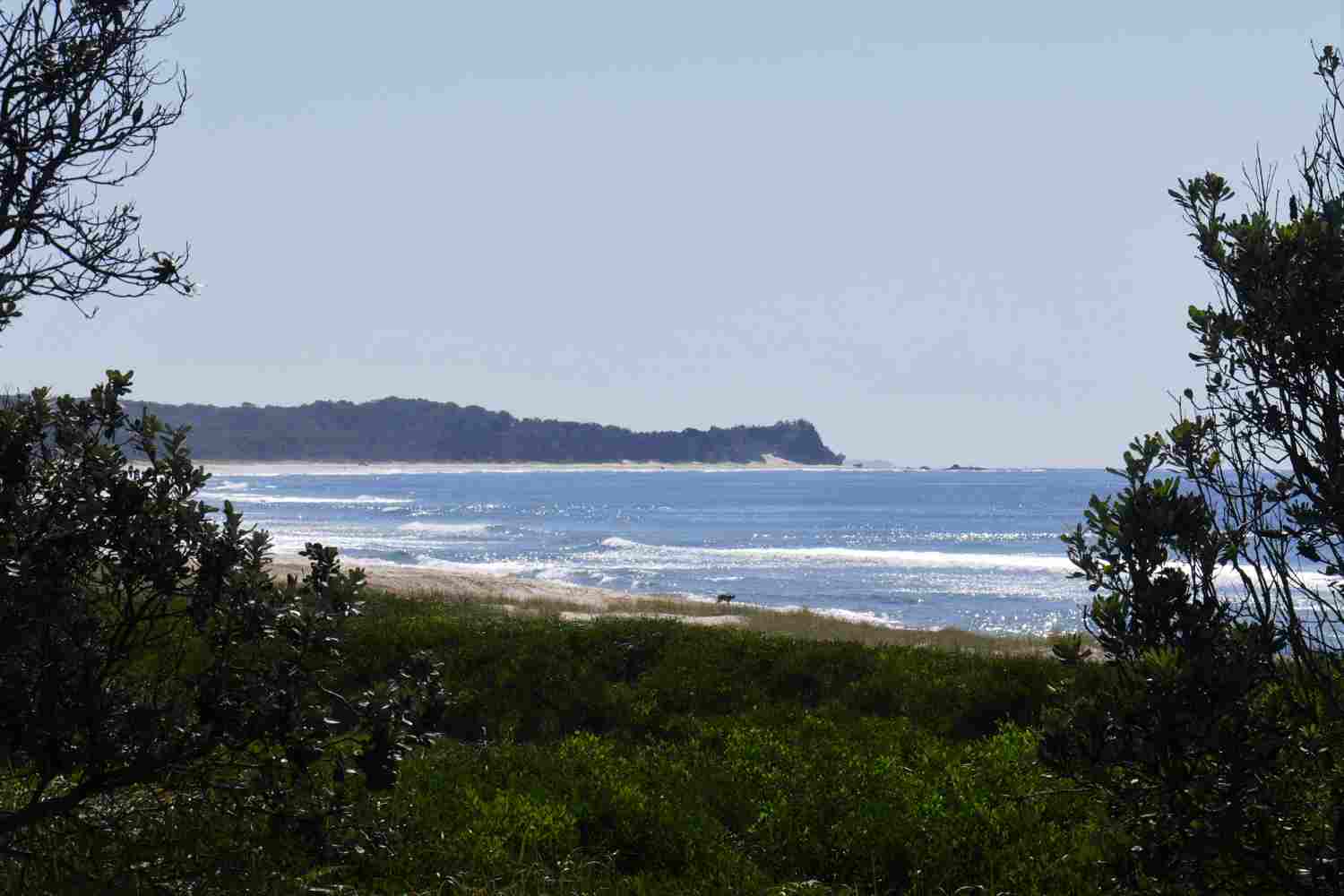 We are rich in sources for the senses, bump into neighbours on the hind dunes, towels hanging from their shoulders. They have counted 28 fishing boats out, the beach near the car park is busy (for here), this is a holiday. 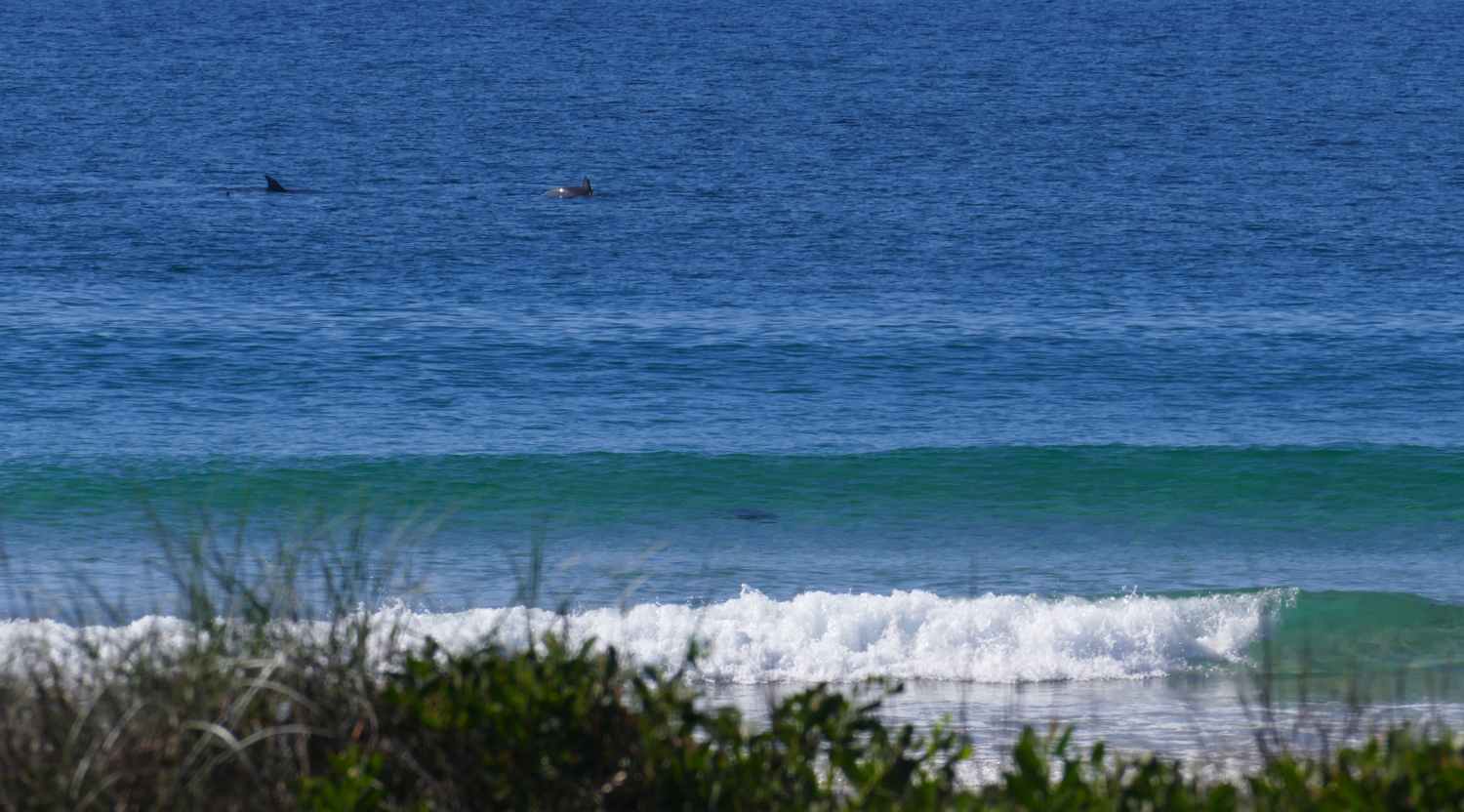 We chat while watching a pod of dolphins cruise south at walking pace. 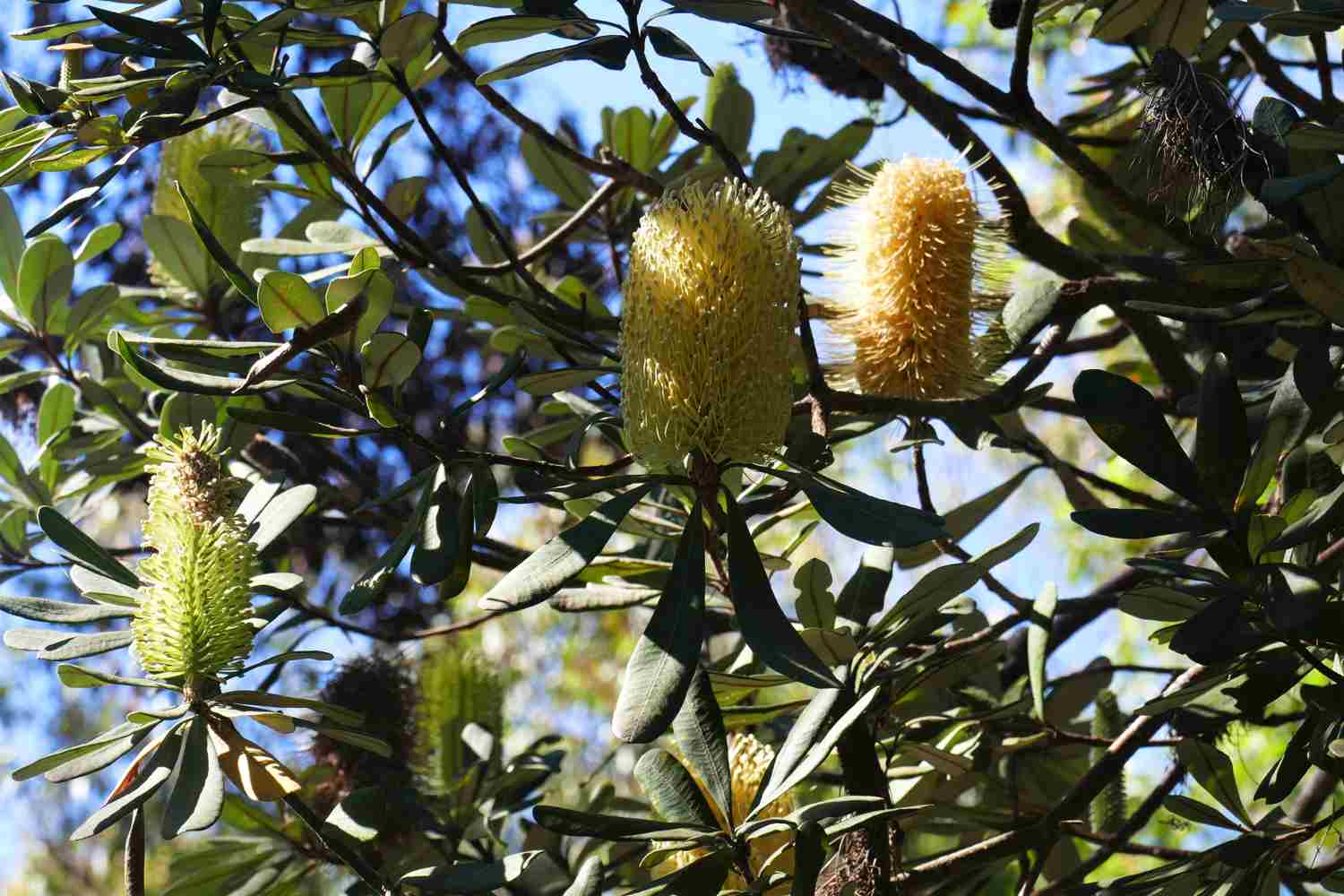 The forest is quiet as usual. Wristy bloodwoods dominate the sandy soils  once past the Banksia scrub, a Fantail Cuckoo plays both plaintive calls. Wyn stops for some impromptu weeding. 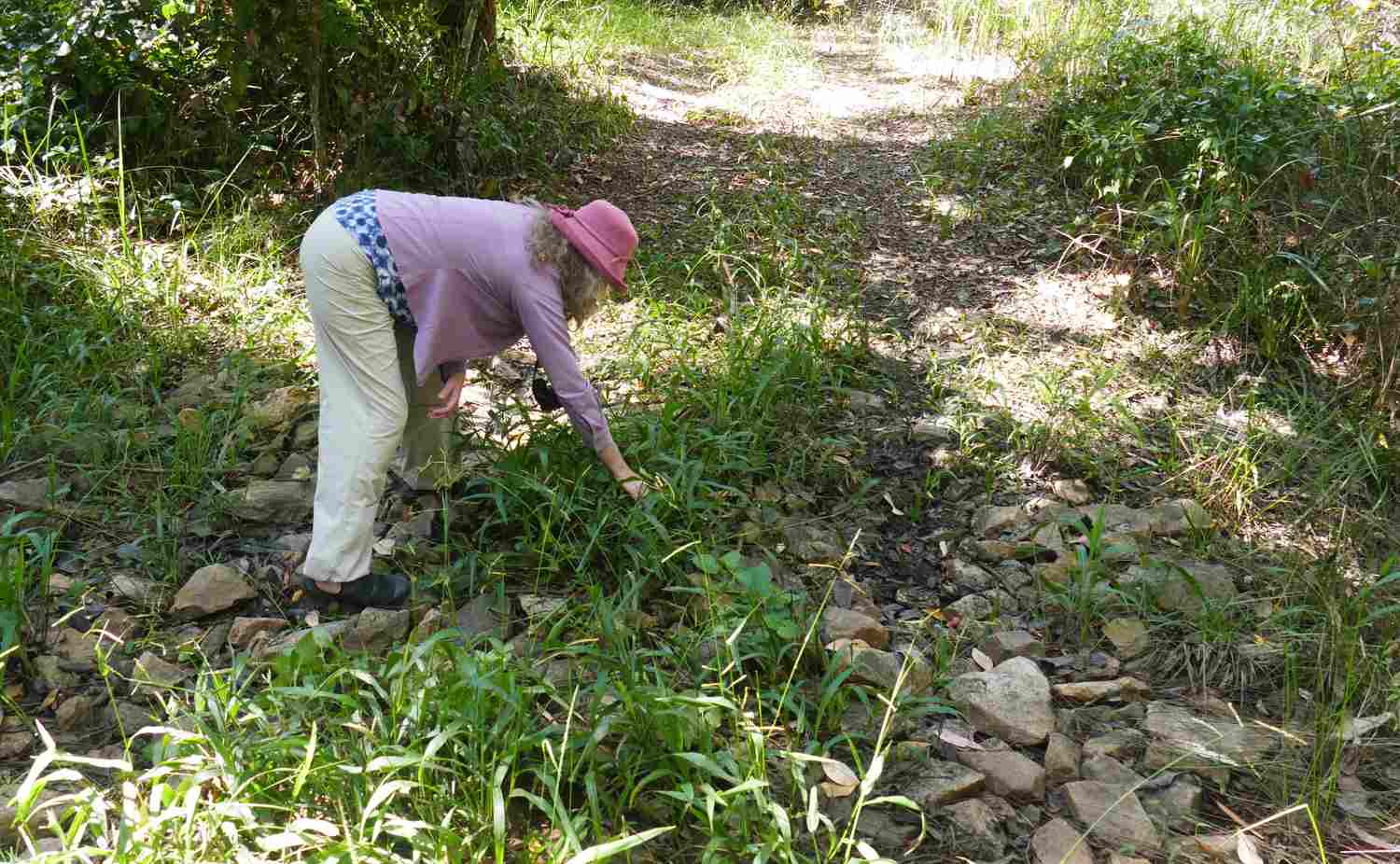 I take the umpteenth photograph of the vine sculpture. 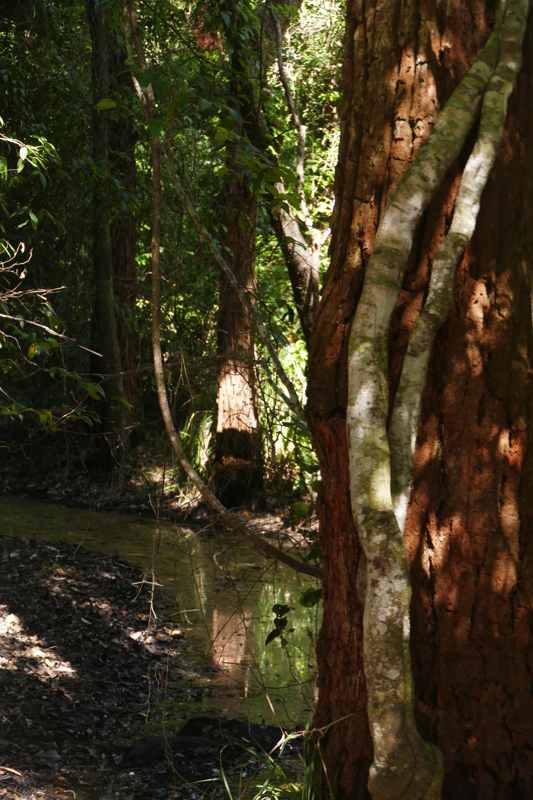 A tree flows over a stump bolted to the earth. 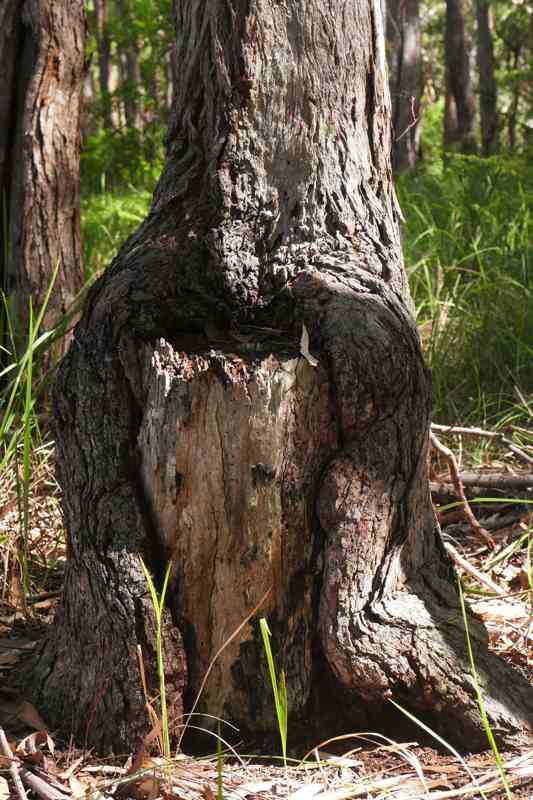 I weed as I walk back through the garden, notice the termites have been renovating on overtime. 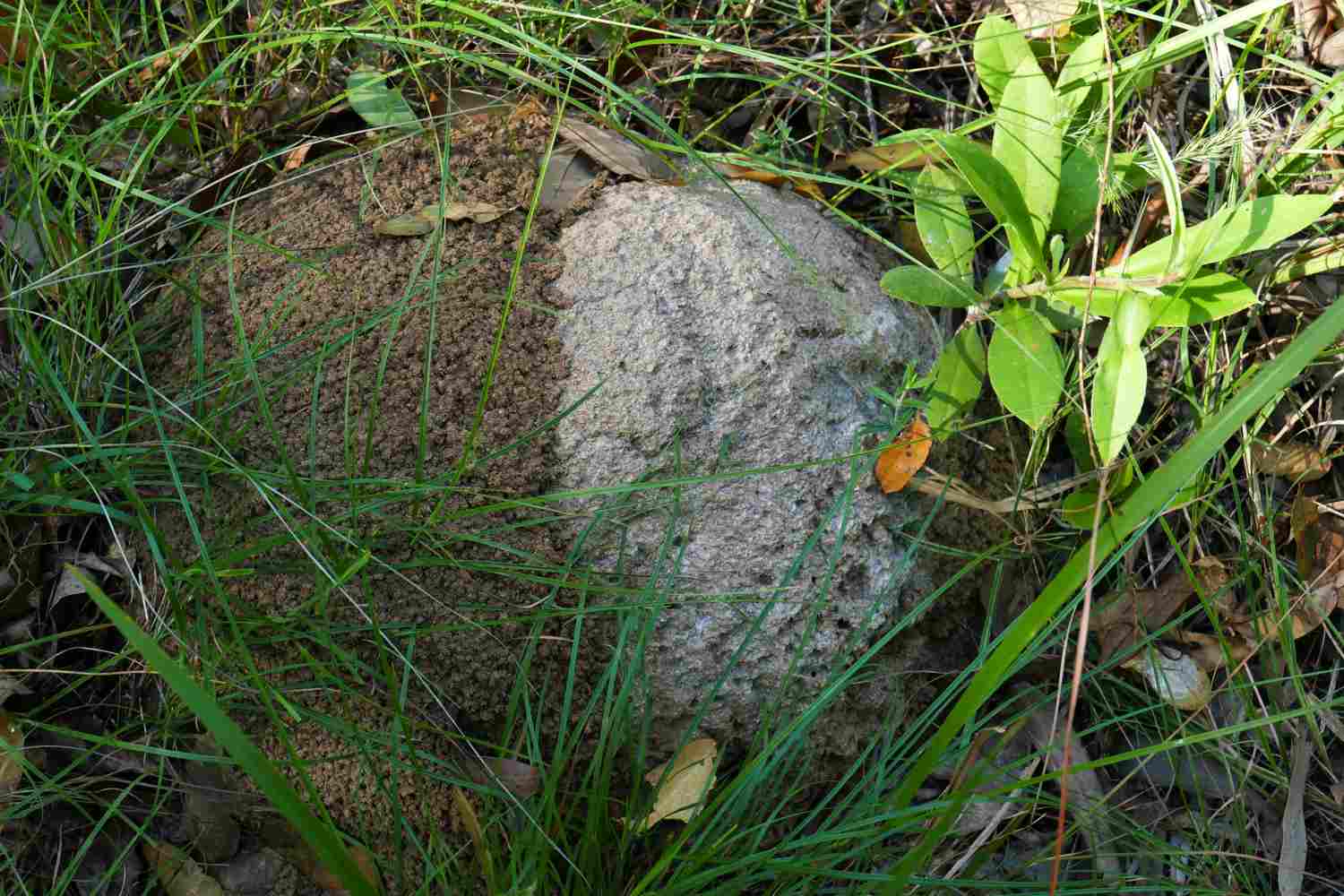 Wyn looks for the Frogmouth, spots it tucked up against its parent on a tree, edge of the driveway. 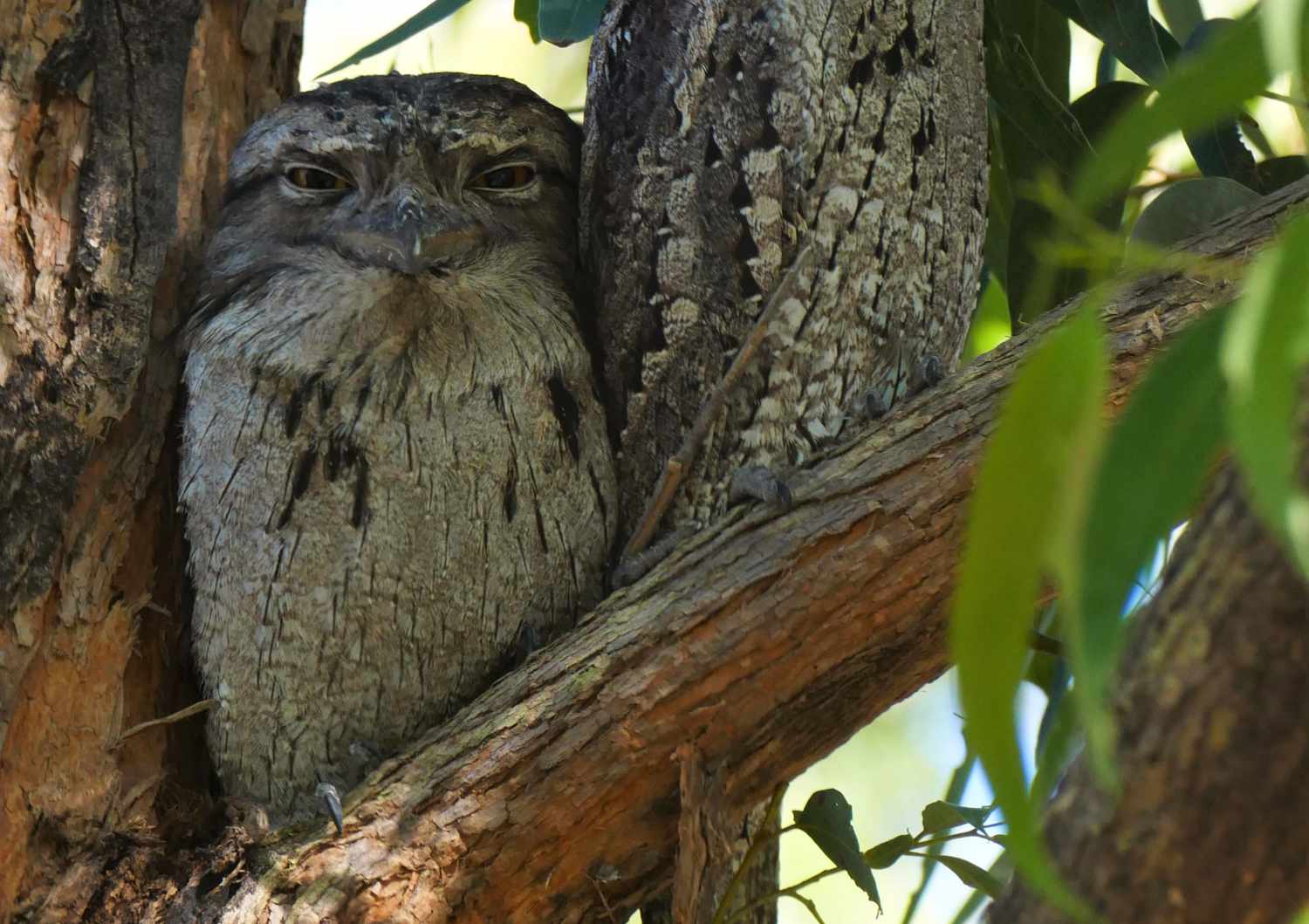 The mottled markings on the feathers is remarkable camouflage, but it’s grey and they are sitting in a tree with red bark. If only they knew how much we appreciate their visiting us.

After getting home, I fall asleep, and again after lunch. My virus (unacknowledged by the world) is enervating. I promised to oil the outside furniture already splitting, say I will tomorrow.

Next door have put out trellis for Monday’s pick up. I suggest to Wyn we take a look. I admit to liking things that are free, We don’t need it, she says, you will have to put it up and repaint it and . . . we can think about it. I said it will be gone soon, but agreed. Trellis doesn’t go with our wild garden look, the grape vine will have to improvise. I look out again, and it was all gone.

A weird mix of mechanical whistles and hissing reveals a young juvenile male and an adult male. 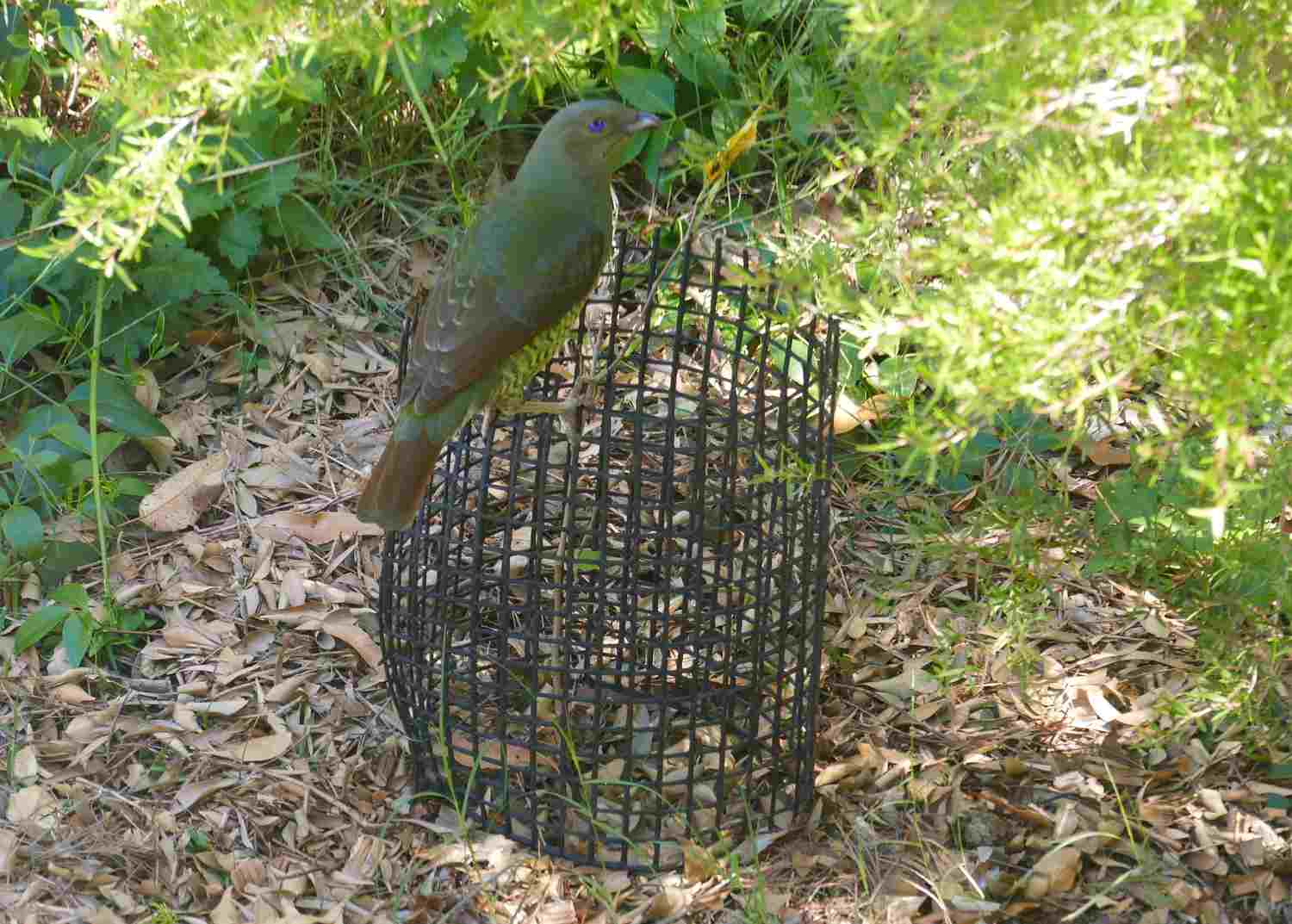 Seeing me, he flies off knocking over the tree guard, spooking the mature male and taking me by surprise. We would love a bower in the garden. 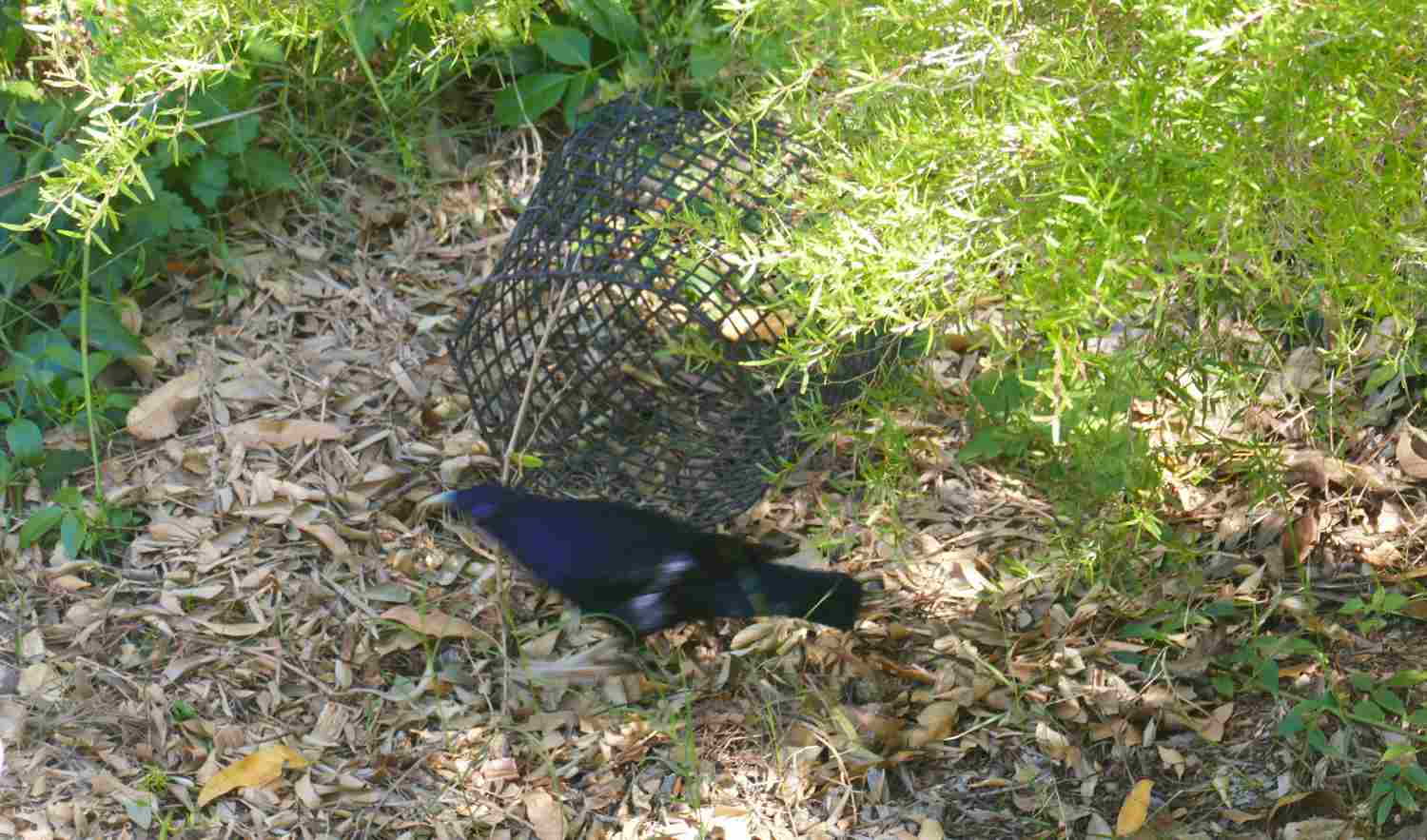 We watch ‘Still Alice’, the acting is too good (Julianne Moore won an Academy Award, Golden Glove, Bafta and more for this performance). We pike, turn it off. Wyn goes to bed. I listen to Purcell’s Dido and Aeneas on BBC3’s Building a Library, an hour after it was broadcast – amazing. Andrew McGregor is talking with early music specialist Kirsten Gibson who chooses Sarah Connor on Chandos. I just don’t take to her voice.

[1] LRB, email 25.4.  Bram Wispelwey and Amaya Al-Orzza, ‘Underlying Condition’, ‘Any successful intervention will have to focus on supporting and strengthening existing community-led initiatives, while working to end the root causes of poor health: military occupation, land dispossession, discrimination, and denial of reparations.’