More than 10,000 people in Melbourne’s coronavirus hotspots have declined to be tested during Victoria’s testing blitz, with Health Minister Jenny Mikakos saying some of those residents believe the virus is a conspiracy. ABC

The US has the most billionaires in the world – but here’s what it doesn’t have: Wealth in the US isn’t trickling down when compared to other countries. Just look at Finland, the happiest country in the world: it only has six billionaires. The Guardian

This is an awkward moment to be celebrating America. The Atlantic 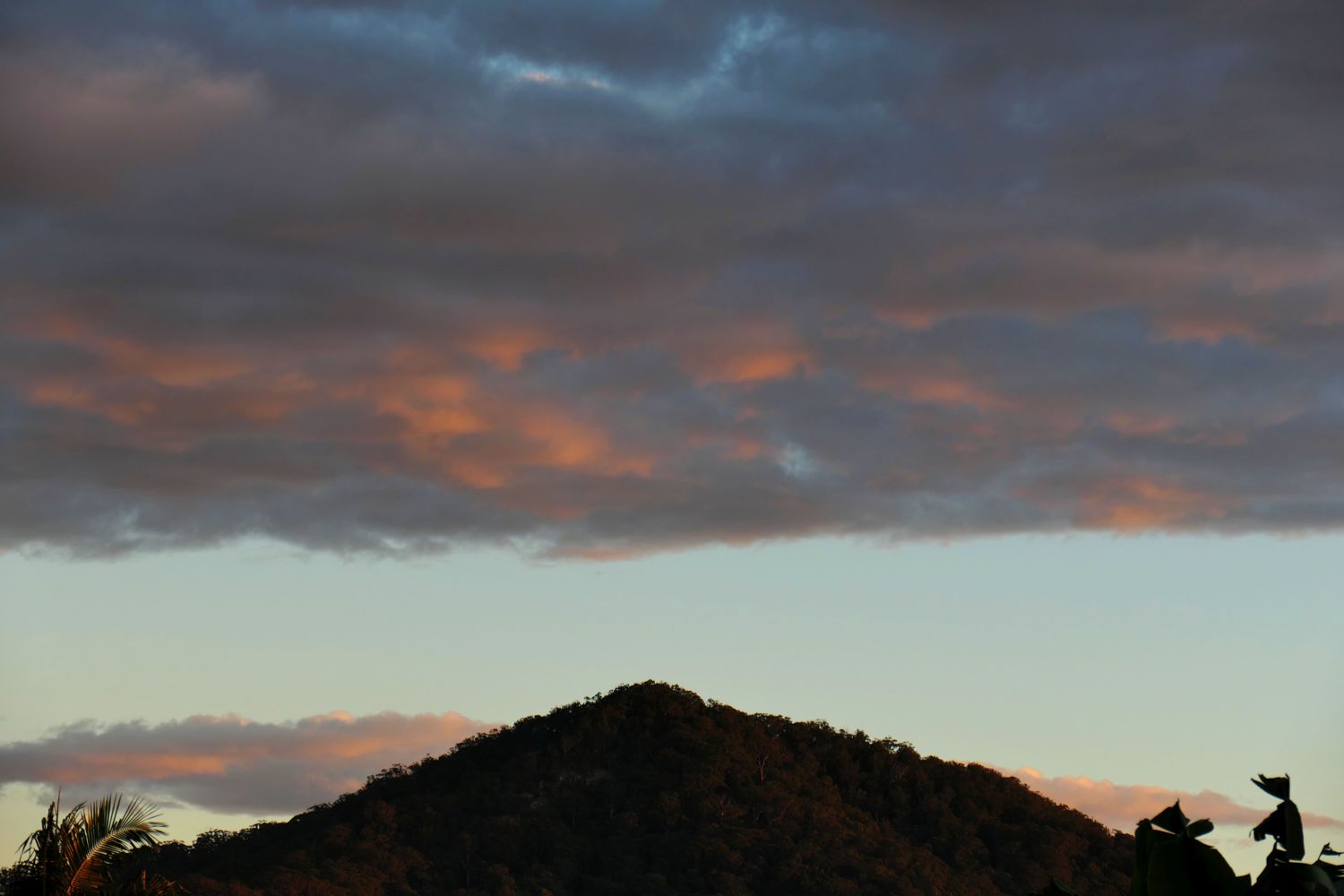 Just after dawn we leave our village from one sacred mountain to another. Feathered arrows are crossing above us, white as snow, each one white as a Wandering Albatross, wings repeating beats of beauty. These are cattle egrets changed out of their orange breeding plumage. They are a common site clustered around cattle on the farms around here, yet were first recorded in Australia just after the Second World War. 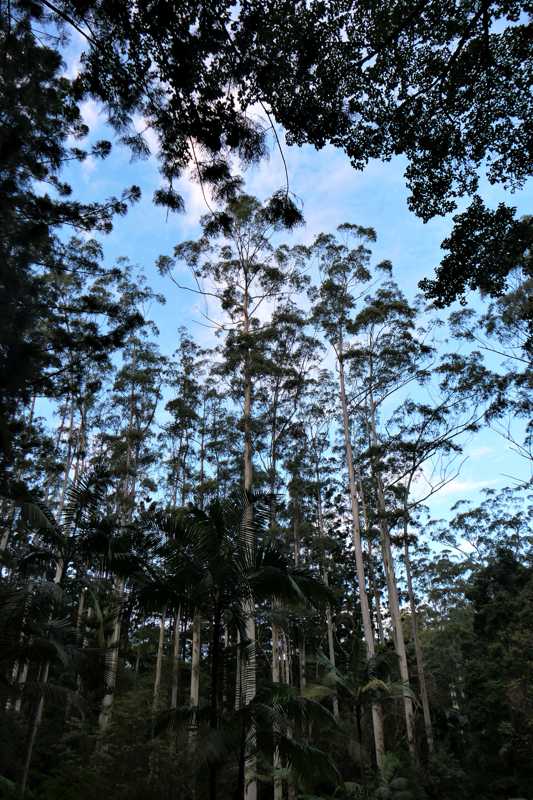 We are heading south to hear music on Mt Yarriabini. [Prevoiusly Yarrahapinni National Park, the name changed after consultation with the local Aboriginal community.]

Last month we heard five lyrebirds in all in Dorrigo. A couple of years ago I heard a male singing the most remarkable song at Yarriabini, better (more accurate mimicry and more musical) than any heard elsewhere in New South Wales: Royal National Park, Sydney; Mount Keira, on the Illawarra escarpment (which Olivier Messiaen visited to hear them (L’oiseaux-lyre et la Ville-fiancée is one of his resulting pieces); or Fitzroy Falls near Kangaroo Valley, where I once rented a shack. 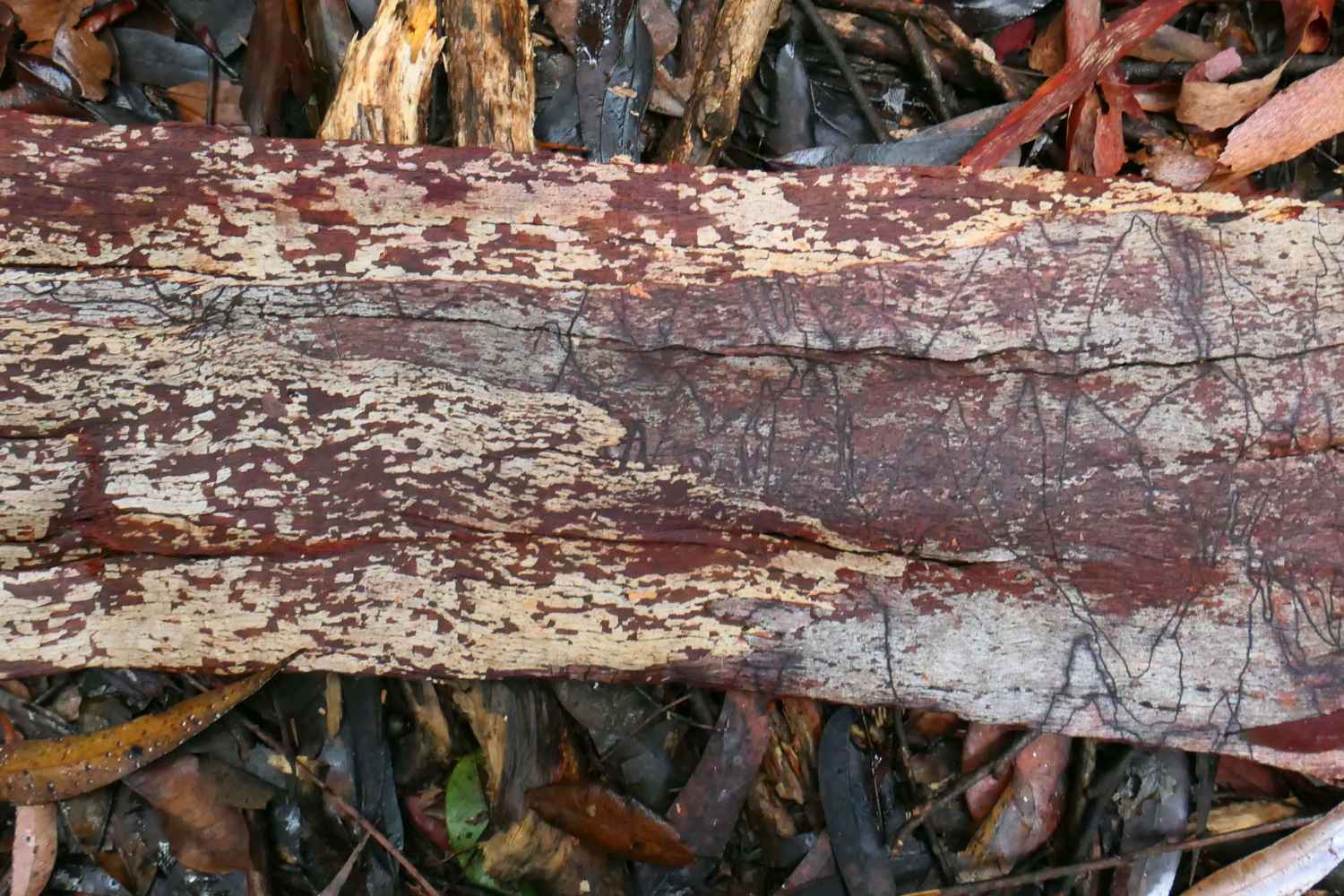 We heard not one Lyrebird. The forest was quiet with the occasional whistles of the Grey Shrike Thrush and bass lines from two distant Wompoo Fruit-Doves. 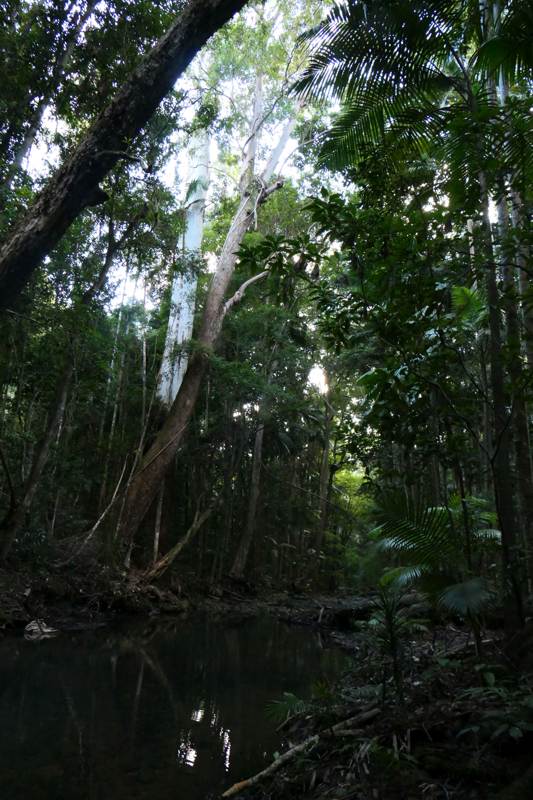 It was cold, 7 degrees, th dark riddled with  stilletos of light. 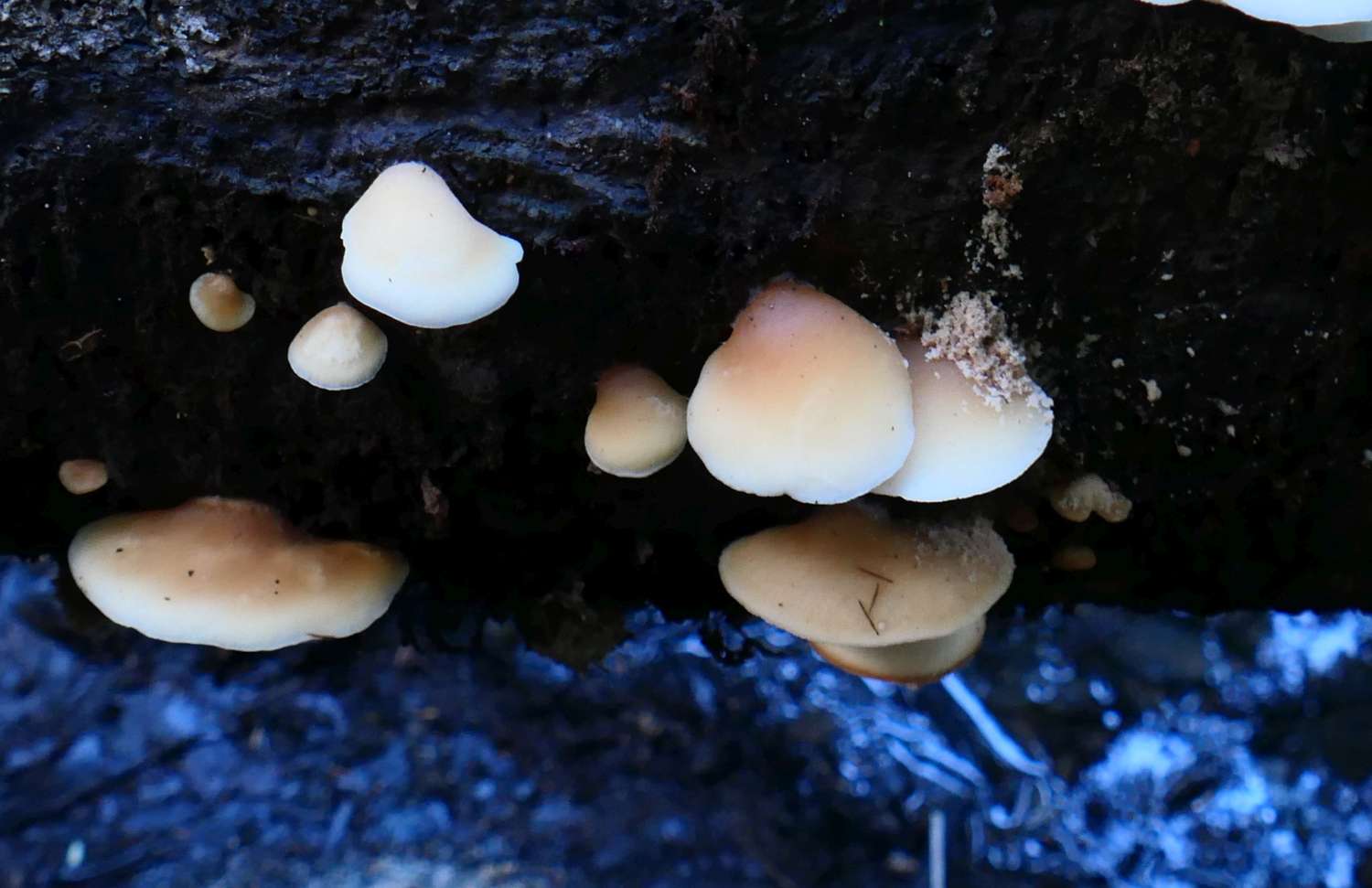 We meandered along Way Way Creek, a gentle riffling that winds through the old songlines. A highlight was various fruiting fungi. 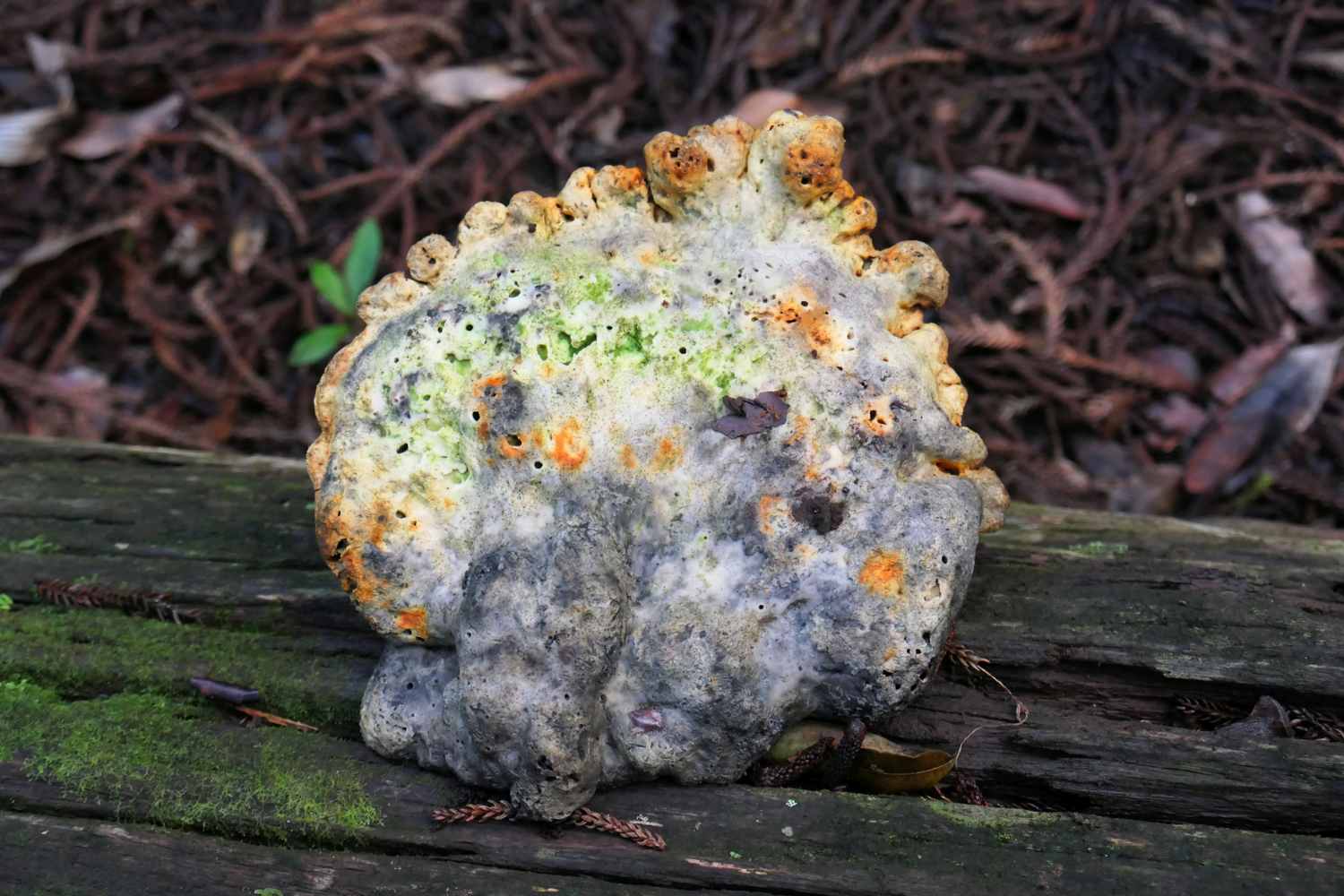 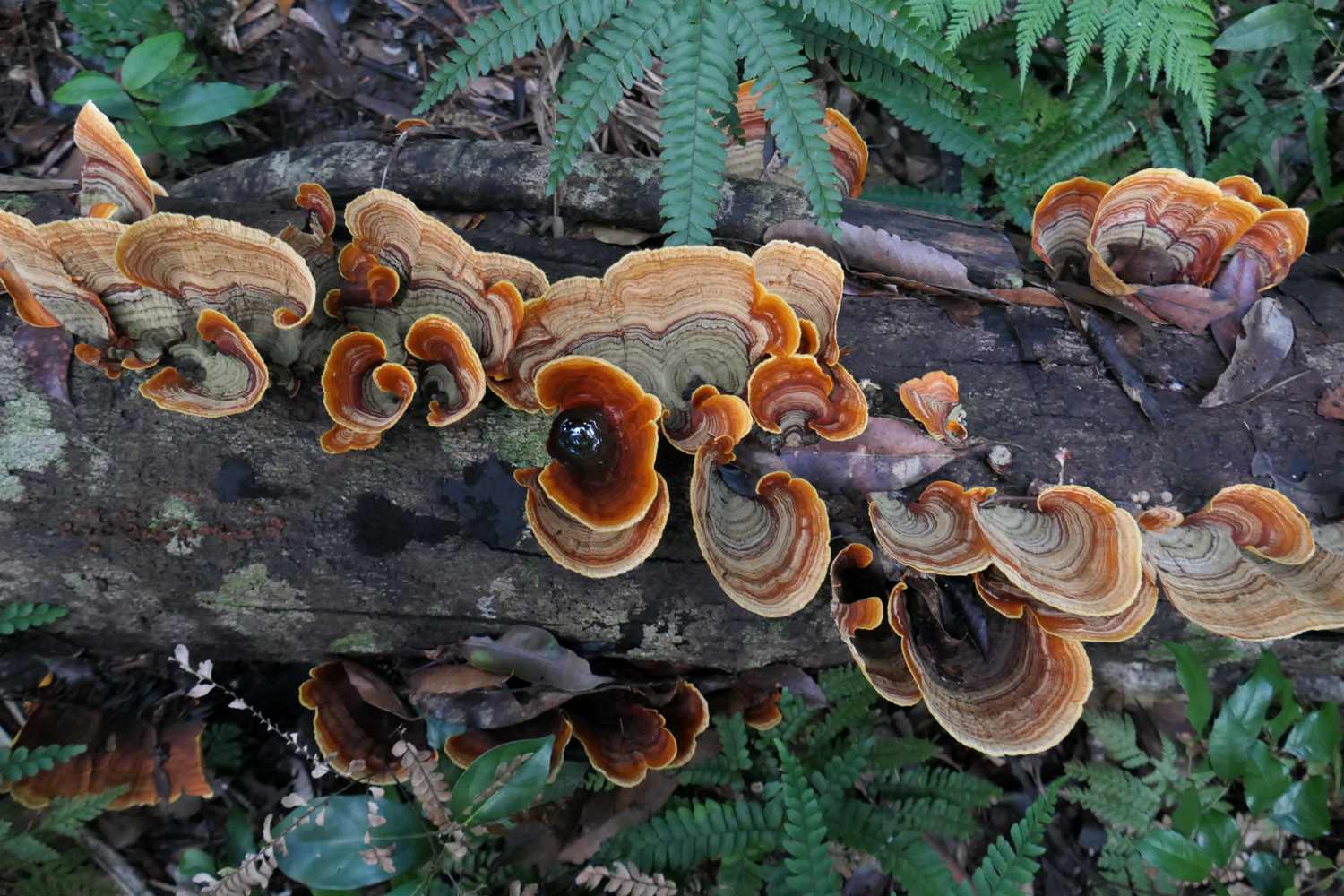 These fungi don’t have gills, their shelves or brackets produce spores above the ground. They add a new layer of spore tissue every growing season like growth rings in a tree. 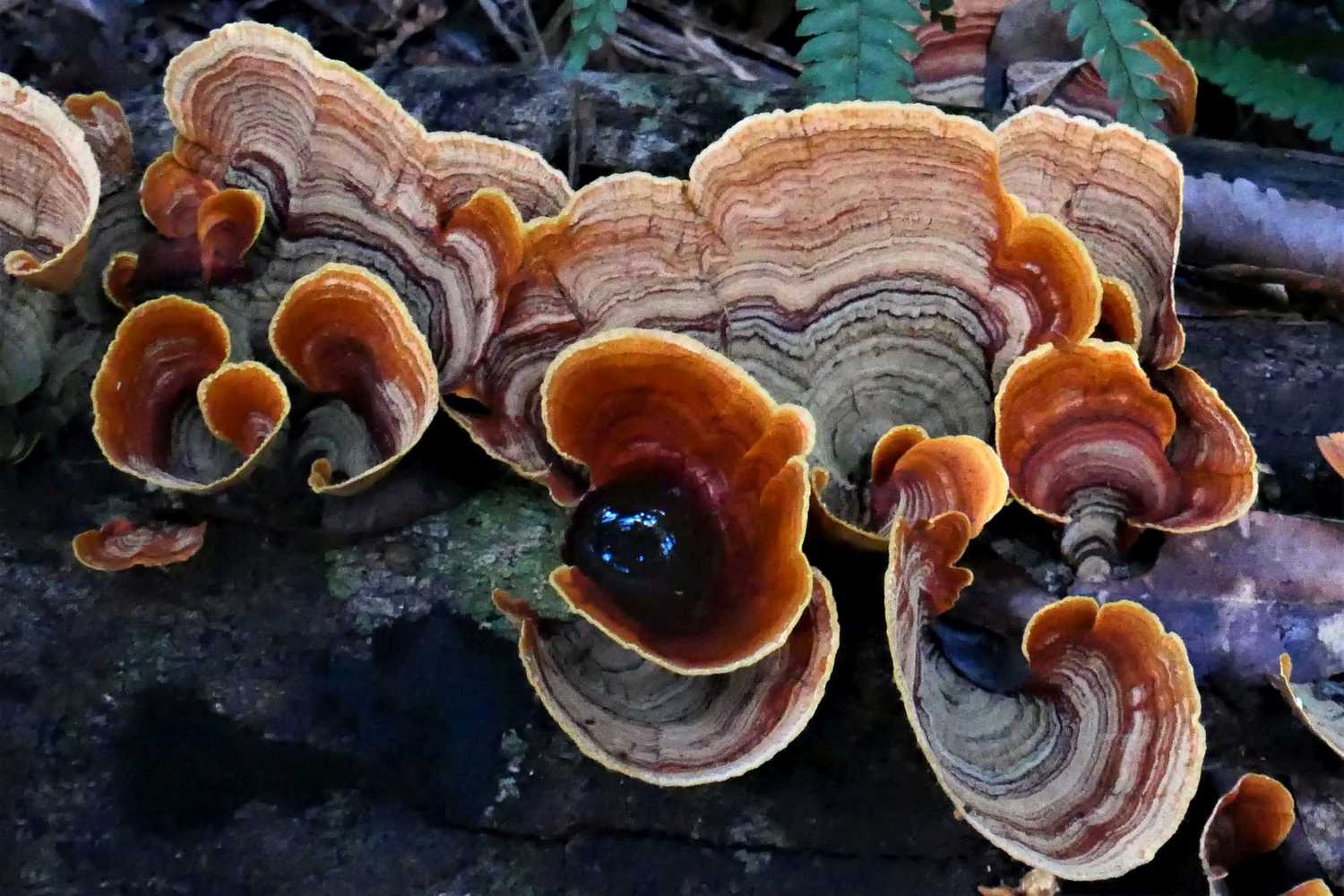 They provide a habitat  for spiders, mites, and insects. Some beetles have adapted a skinny body to fit inside a pore. Most shelf fungi are woody and inedible 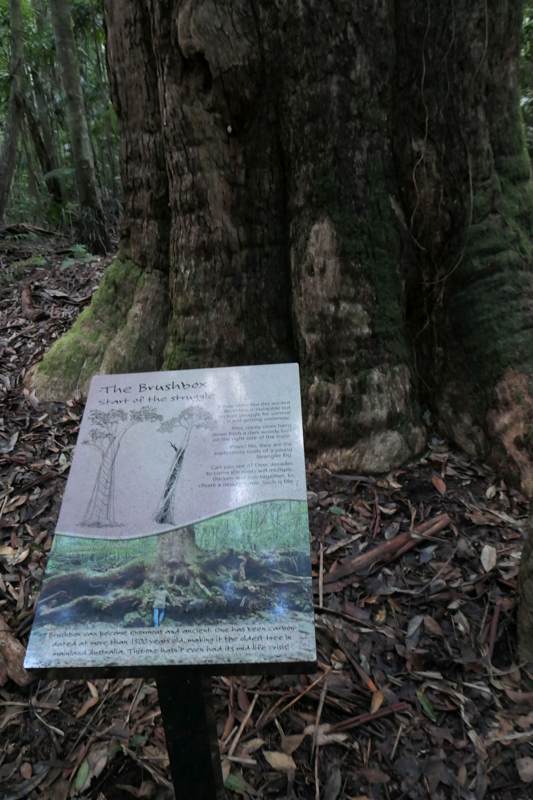 The sign reads, ‘It may seem like this ancient Brushbox is invincible but an epic struggle for survival is underway  . . . Brushbox can become enormous and ancient. One has been carbon dated at more than 1500 years old, making it the oldest tree in mainland Australia.’

There are some giant stumps, being whittled down, each a crumbling shrine. Logging has led to a loss of hollow bearing trees. One of the largest survivors is this Brushbox, estimated to be 500 years old. It is haunted, wires hang down, the feelers of a strangler fig getting down to business. Their strategy is to grow top down, so that the seedlings get the light they need. They grow like H.R. Giger’s aliens, arms wrapping around and gradually smothering the host gradually. 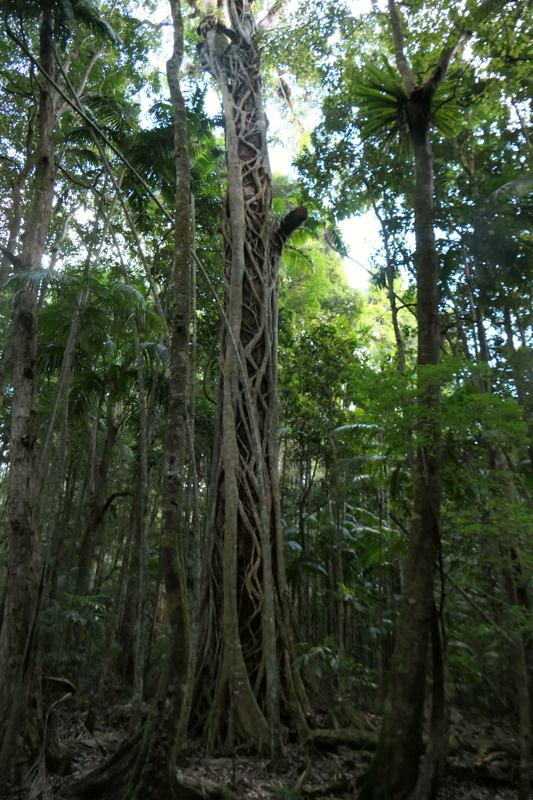 The Greek philosopher Theophrastus, the founder of modern botany studied the edible fig, Ficus carica and noticed tiny insects coming and going in and out of the fruit. 2,000 years later it was realised that each Ficus species has its own wasp pollinator, while some even have two, an 80 million year old arrangement.[1] 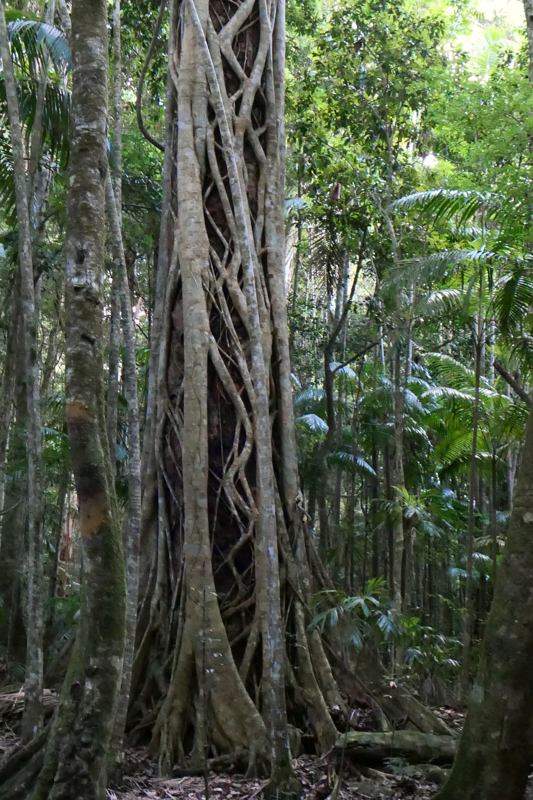 Their growth is a very destructive strategy (I’m thinking of the famous images of Angkor Wat). The seeds germinate in cracks and grow, their roots prizing apart stone and brick. Their figs attract birds and animals which in turn disperse the seeds of other species. Thus fig trees helped forests reclaim their territory.

Excerpt from Gondwana Rainforest, 2015. From Bruxner just north of Coffs

now fading illegible patterns on the track. Half are crowned by

Birds Nest Ferns, half hang wires or arms down their sides from the sky.

The wires seem to be running electrical connections to the ground, touching

earth triggers the feed, a metamorphosis from epiphyte to parasite,

competing for nutrients bequesting a vague trace of grotesque husk.

Strangler Figs are a cornerstone species that begins with a dainty wasp,

with eggs, as she wriggles her wings tear away and she is trapped, rubs

(a seed not fruit). When she dies the males hatch, chew open their sisters

and mate, then drill through the testa and perish in the process.

On delicate wings the females escape dusted in pollen and with their eggs.

old enough, of the right species and fruiting their large attractive seeds.

At various times of the year, figs feed 70% of species here,

some seeds pass through their guts intact and are excreted in the canopy.

is climbing for the light. All these trees are communicating through

an underground network of roots and mycorrhizal fungi, the symbiotic

fungi shift carbon, nutrients and water between trees depending on needs.

We pretend we know the gaps in our knowledge and what we need to know,

but wilful ignorance and complicity is weakening Gaia’s biological heart

because it is hard to know how to realise our connectedness. 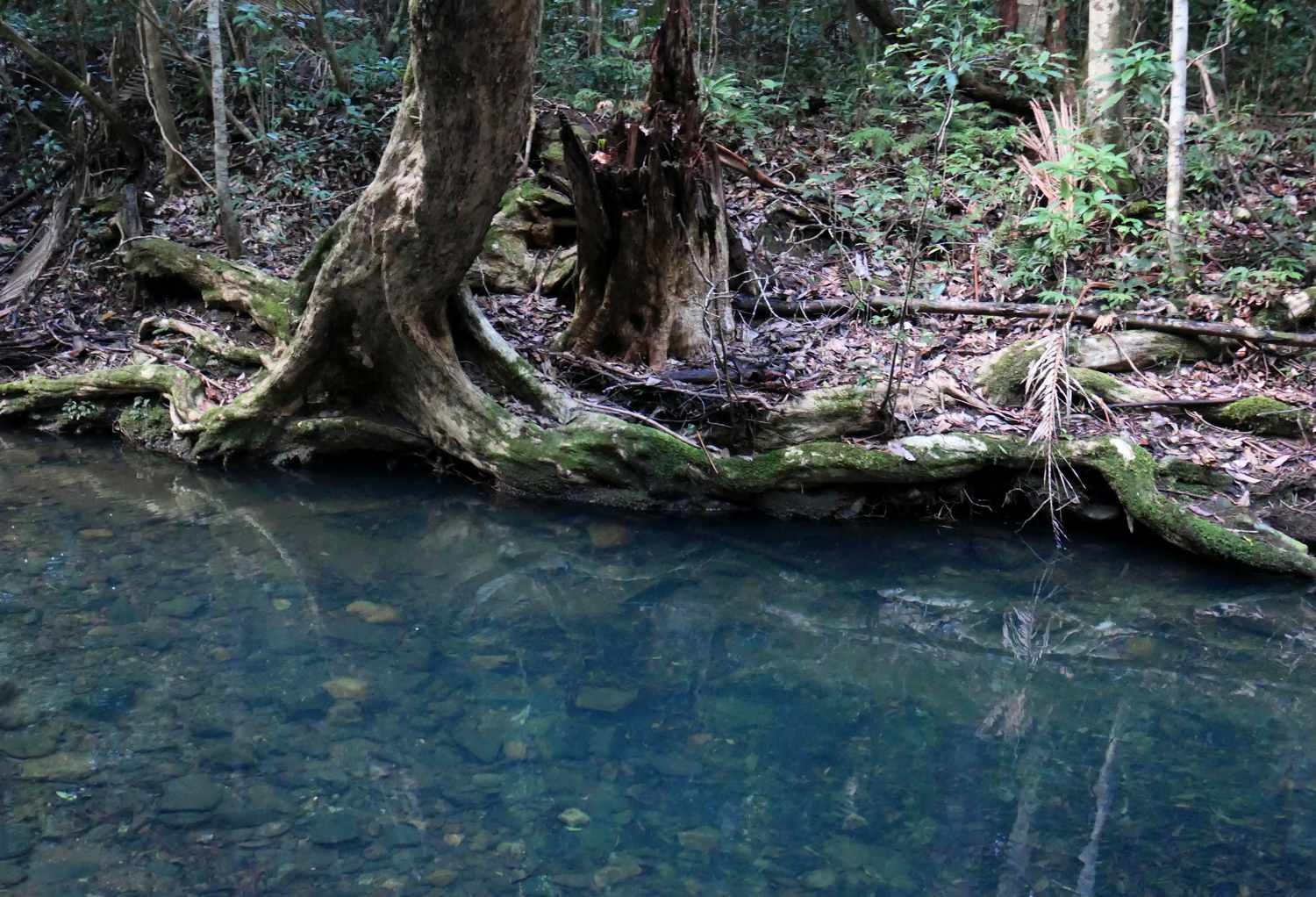 A rainforest has such a rich variety, and a refusal to be reduced to the term biodiversity. A glossary is useful. There are so many different trees, huge red and yellow Carabeens, Steelwood, Blue Quandong, Bollygum, Sour Cherry, many more. A few Flooded Gums have invaded the rainforest, probably after a huge storm. The creek in parts looks like a construction site, but it’s so quiet you feel like whispering. No frogs calling. 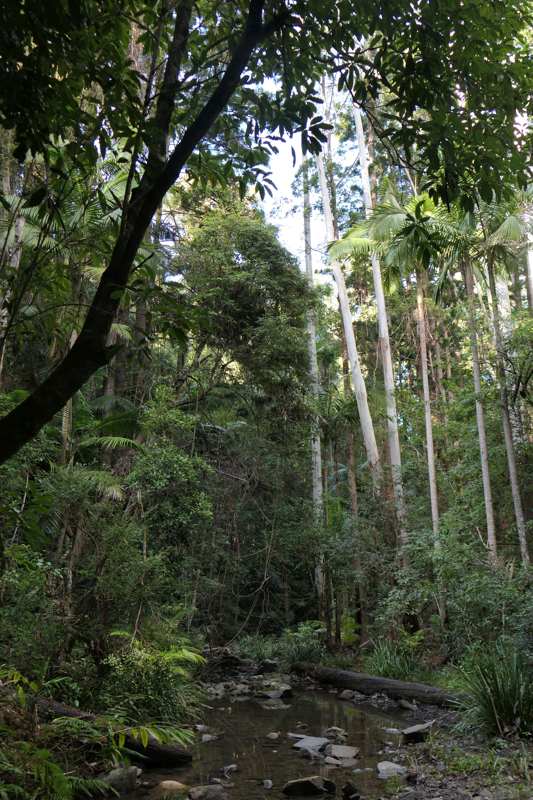 The sun was out when we got back into the open and the small birds had woken up. 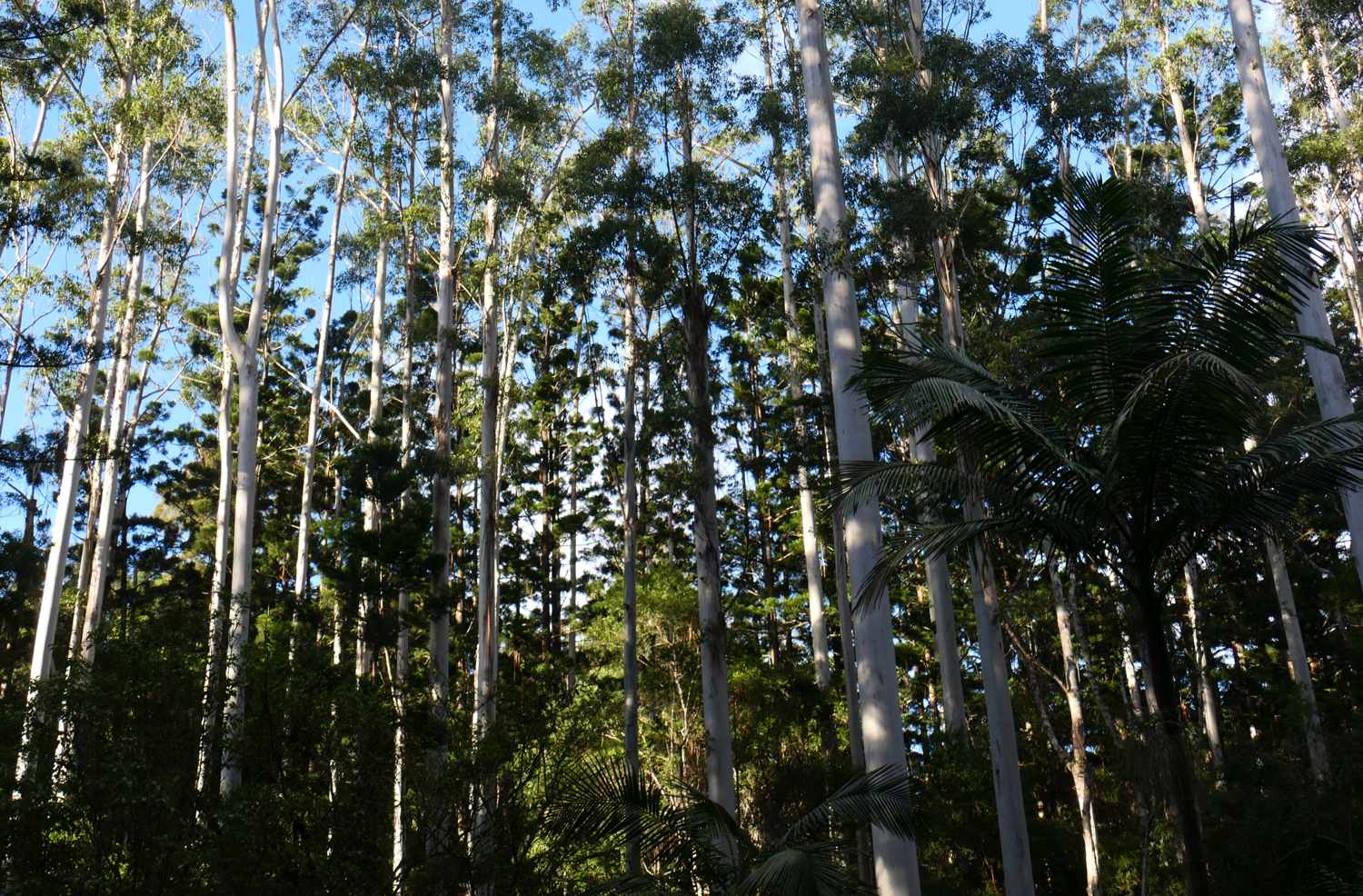 The Flooded Gums and Hoop Pines by the picnic area have been planted. 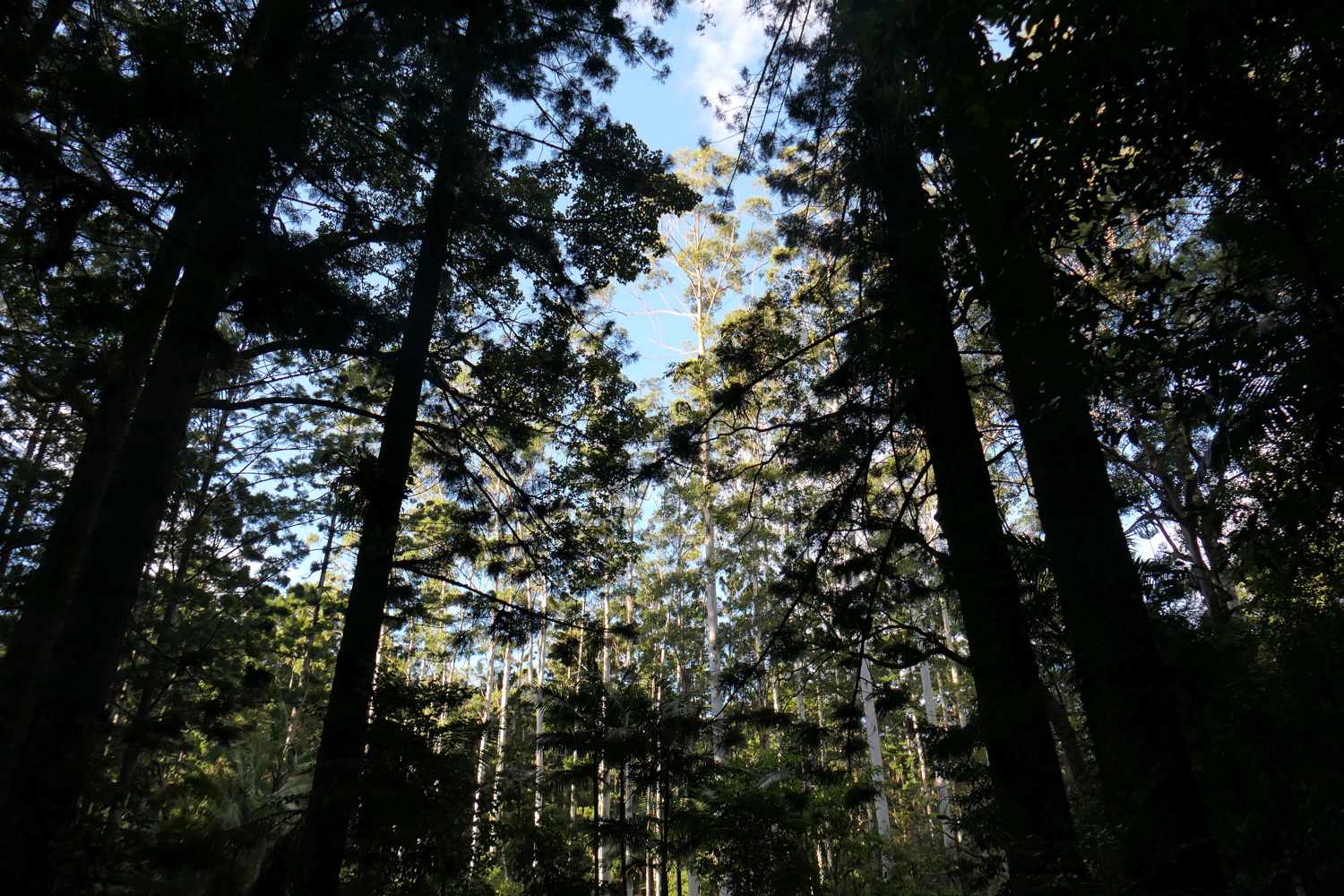 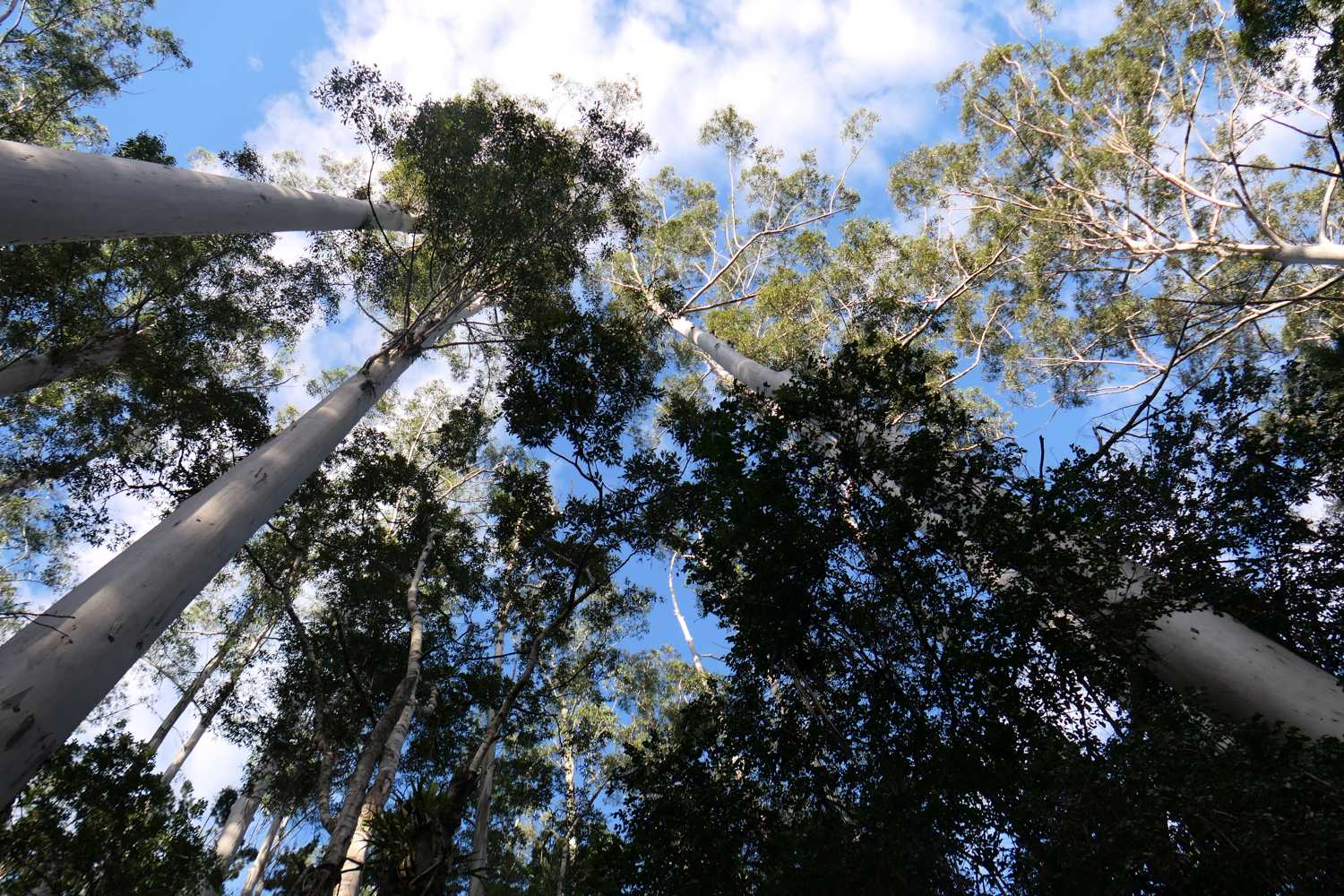 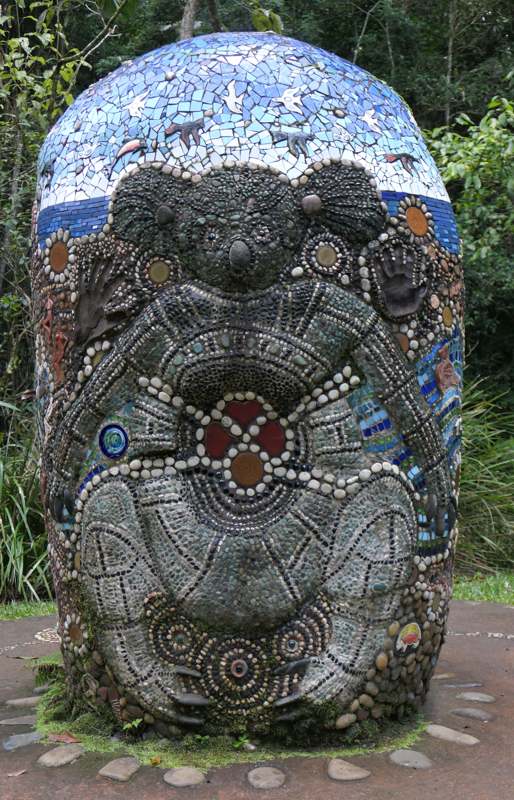 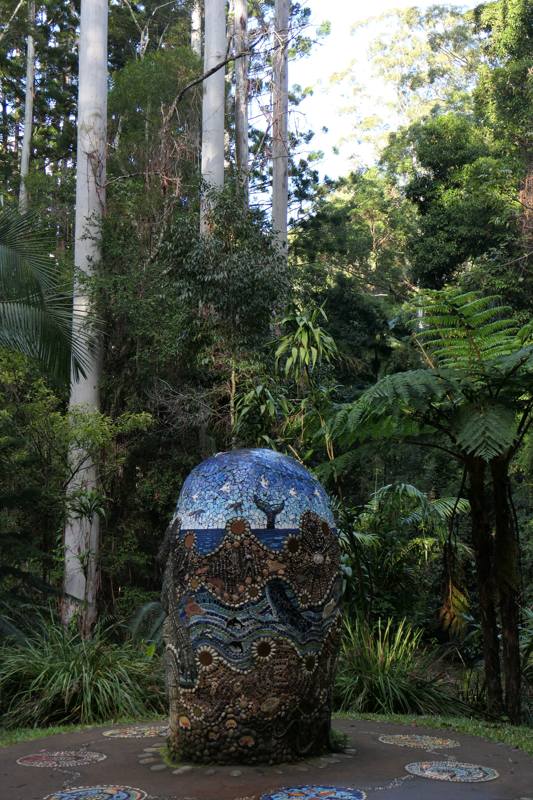 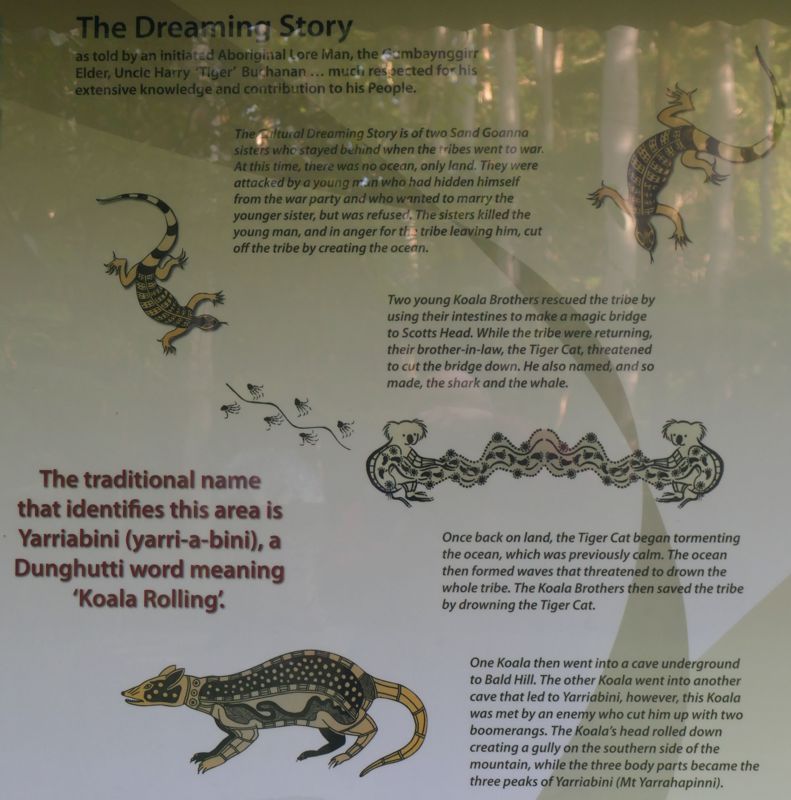 The mountain is on the border of Dunghutti and Gumbaynggirr lands. 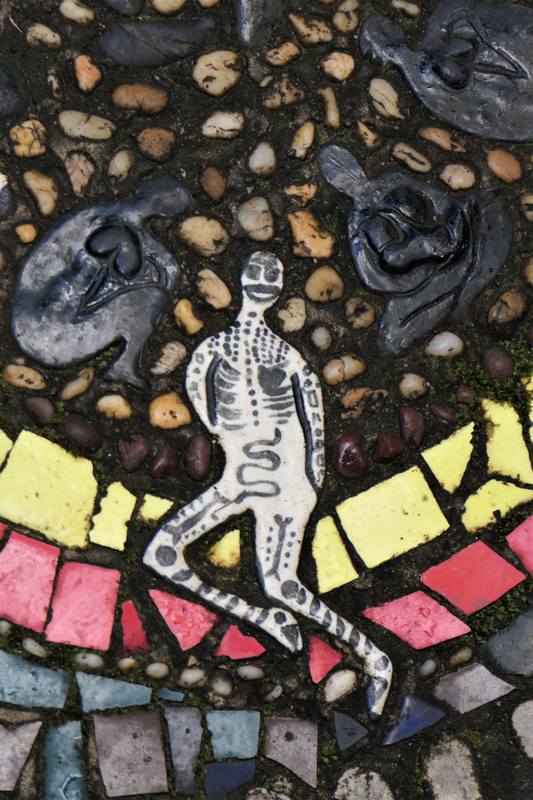 On the way home crossing the river, a cacophony is crossing the opposite way, a bundle of squawkings, party animals, circling, jostling, undecided White Corellas. Adam Nicolson talks of watching fulmars in Scotland, ‘their stiff-winged perfection circling in the updraughts, playing with the wind, filling their life-space not like children in a playground, but graceful, a ballroom of birds 300 feet deep and a few hundred yards long, beautiful for the completeness of it, those mottled grey wings sweeping and re-sweeping across the air below us.’[2]

Christian McBride, Overture from The Movement Revisited A Musical Portrait of Four Icons, 2020. He is a bassist and composer using the words of Rosa Parks, Malcolm X, Martin Luther King Jr., Muhammad Ali, and Barack Obama spoken by actors with a big band, gospel choir and more. This track works brilliantly with speech, as one way art can be political and stay true to itself.

Caroline Mimbs Nyce writes, ‘This is an awkward moment to be celebrating America: The past few months showed a great power in decay, struggling to contain a deadly pandemic and reckoning anew with its racist systems.’ [3]

‘President Trump used an elaborate fireworks display and Air Force One flyover at Mt. Rushmore on Friday night to rally his base, ushering in Fourth of July celebrations a day early with accusations that a ‘new far-left fascism’ is part of ‘a merciless campaign to wipe out our history’. . . ‘Make no mistake,’ Trump told several thousand people, packed tightly into the amphitheatre near the monument, mostly without masks, chanting ‘USA’ as they cheered him on, ‘this left-wing cultural revolution is designed to overthrow the American Revolution’.’ July 3, 2020[4]

Tom McTague writes the essay, ‘The Decline of the American World: Other countries are used to loathing America, admiring America, and fearing America (sometimes all at once). But pitying America? That one is new.’

‘Whatever moral or strategic challenge it faced, there was a sense that its political vibrancy matched its economic and military might, that its system and democratic culture were so deeply rooted that it could always regenerate itself. It was as if the very idea of America mattered, an engine driving it on whatever other glitches existed under the hood. Now, something appears to be changing. America seems mired, its very ability to rebound in question.

The street protests, violence, and racism of the past few weeks have erupted at the very moment the country’s institutional failings have been exposed by the COVID-19 pandemic, reinforced by its apparently unbridgeable partisan divide, which is now even infecting parts of the American machine that have so far been untouched: its federal agencies, diplomatic service, and the long-standing norms underpinning the relationship between civilians and the military. All of this is happening in the final year of the first term of the most chaotic, loathed, and disrespected president in modern American history.’[5]

Ibram X. Kendi suggests a revised north American project: We should be celebrating our disobedience, turbulence, insolence, and discontent about inequities and injustices in all forms. We should be celebrating our form of patriotism that they call unpatriotic, our historic struggle to extend power and freedom to every single American. This is our American project.[6]

One in eight Americans still live below the poverty line, and 40% are one paycheque away from destitution. In fact, there are a lot of basic services that other similarly wealthy countries provide as a minimum that just aren’t given to Americans.  . . the US is the only wealthy economy in the world without a paid vacation policy . . . Americans live shorter lives than people in other similarly wealthy countries. Meanwhile, the US spends nearly twice as much on healthcare as the average OECD country – but with the lowest life expectancy and highest suicide rates among the 11 nations, it’s not clear where that money is going.’ [8]

The United States has the highest rates of incarceration in the world. With 655 inmates per 100 thousand of population, the U.S. is by far the leader among large industrialized nations in incarceration. Russia comes closest at 381.[9]

50 million people in the US live in poverty with little hope of change. [11]

I catch Simon. NPWS Operations Manager, driving out of the reserve. The backburn is now on for Wednesday, says he loves our  garden – I tell him it’s for the animals and insects. 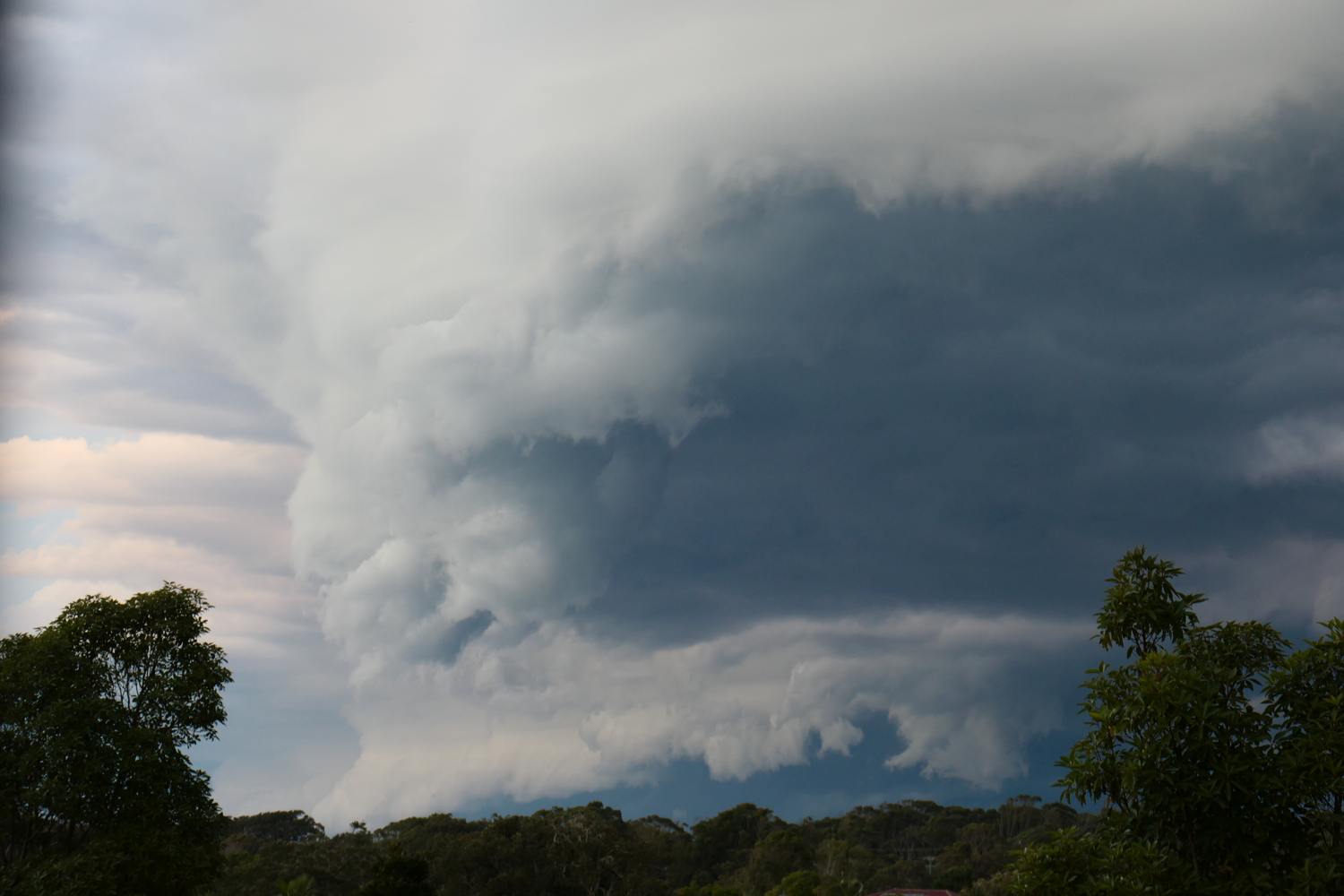 And then the storm arrives, and the moon is snuffed. 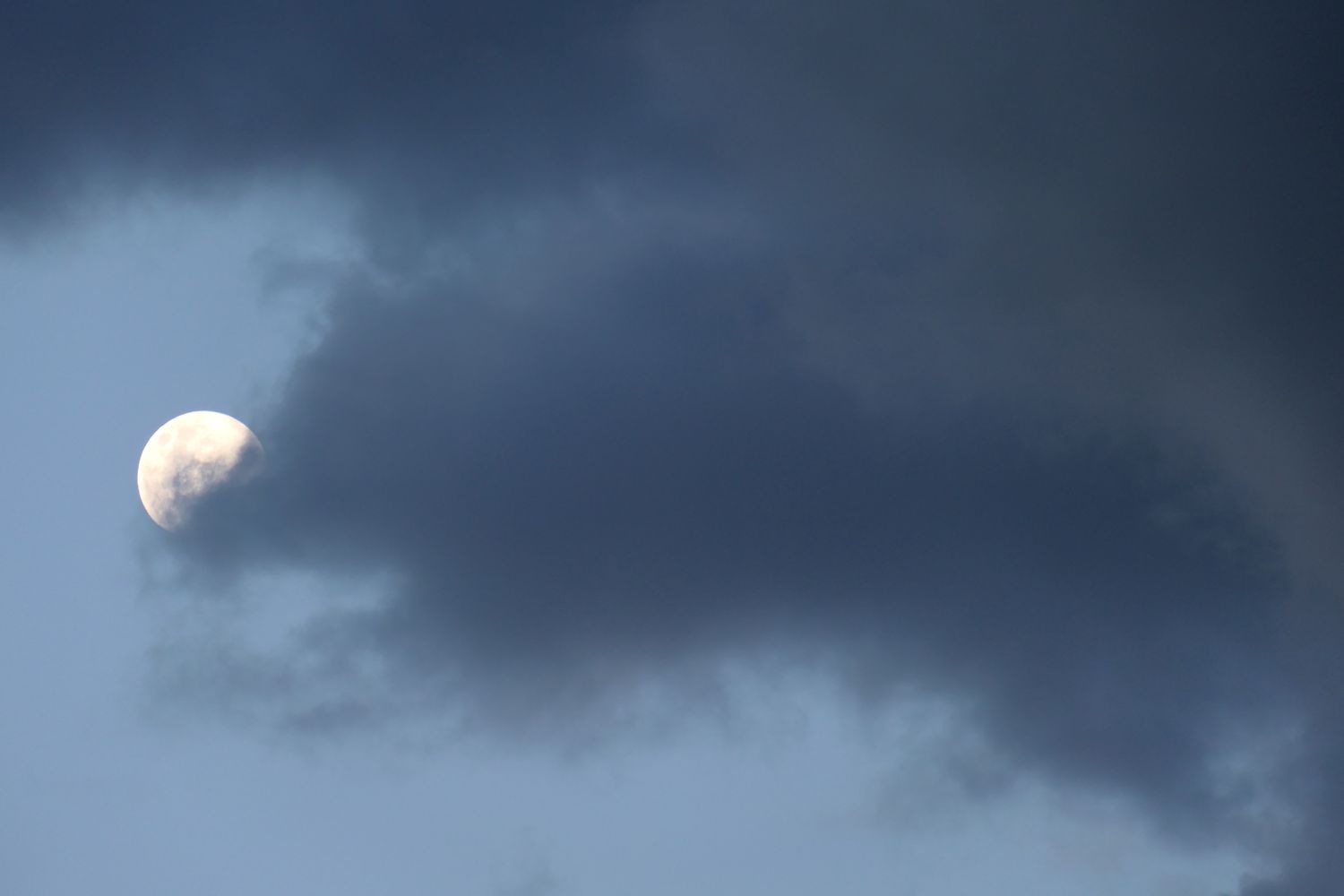 [1] Alfred Russel Wallace while on his eight-year expedition across the Malay Archipelago and through Borneo called figs, ‘the most extraordinary trees in the forest’. The Portuguese explorer Pedro a Campos reached an island in 1536, the coast fringed by strangler figs with masses of brown roots hanging down like matted hair. He named the island Los Barbados, ‘the bearded ones’.