Our borders are being closed tonight (March 20), and we have friends in Banda trying to reach Darwin, I have warned them to try and make it over today. The news from Italy is terrible, deaths have surged to nearly 3,500.

It is a time of panic (panic buying of toilet rolls, and fighting over toilet rolls). Lucretius describes a plague where relatives fought over funeral pyres there were so many dead.This pandemic has had horrific consequences, so far and the end is not in sight, as of the equinox. There could be a huge death toll around the world.

The Roman writer Lucretius ends his new style of epic (On the Nature of Things, Ist C BCE) aimed at superstition and the belief in gods with an Athenian plague, with bodies piled up around fountains and the shrines of the gods and dead parents lying across dying children, the gods doing nothing.

to champion the philosophy of Epicurus,

writing about farming, cosmology and philosophy,

demythologising the arts and technologies, ridding the earth

of gods as active and wilful in the world, ridding us of immortality.

They move by themselves, move down not up and swerve.

We are cycling and recycling through the earth

which causes plant and animal life to grow and die,

remains restored to earth as dust in proportion

to what the earth has given. Lucretius ends with bodies

piled up around fountains and the shrines of the gods

the gods doing nothing, not even smacking thunder

and lightning during this Athenian plague.

For Richard Feynman, the atomic hypothesis was the key move:

“that all things are made of atoms — little particles

that move around in perpetual motion,

attracting each other when they are a little distance apart,

but repelling upon being squeezed into one another.”[i]

it is a world we cannot sense or brace against; one we take on trust

from Galileo’s argument that the book of the world is,

“written in the language of mathematics.”

Feynman married his high school sweetheart during the war

not the typical abstruse mathematical deductions.

Two years later, TB killed her and he started

writing to her. His last letter ends: ‘P.S.

Please excuse my not mailing this – but I don’t have your new address.’ 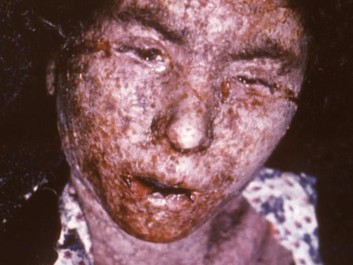 Plague devastated Athens in the 5th C BCE, during the Peloponnesian war. Lucretius gives a detailed account of the horror, of the pain, the panic, collapse of public order:

‘Plague-stricken mob. All places would they crowd,
All buildings too; whereby the more would death
Up-pile a-heap the folk so crammed in town.
Ah, many a body thirst had dragged and rolled
Along the highways there was lying strewn
Besides Silenus-headed water-fountains,-
The life-breath choked from that too dear desire
Of pleasant waters. . .  And sudden stress
And poverty to many an awful act
Impelled; and with a monstrous screaming they
Would, on the frames of alien funeral pyres,
Place their own kin, and thrust the torch beneath
Oft brawling with much bloodshed round about
Rather than quit dead bodies loved in life.’

Camus wrote: ‘Everybody knows that pestilences have a way of recurring in the world, yet somehow we find it hard to believe in ones that crash down on our heads from a blue sky. There have been as many plagues as wars in history, yet always plagues and wars take people equally by surprise.’ The Plague, 1947. He hated fascism and materialism. ‘What interests me is living and dying for what one loves.’

[i] That all things . . . Richard Feynman, Six Easy Pieces: Essentials of Physics Explained by Its Most Brilliant Teacher (1995) “Atoms in Motion”.