Panic index’ shows Australians were the world’s best panic buyers: Australia has done better than most nations in stopping the spread of the coronavirus. But Australians left everyone behind when it came to panic buying. SMH

He did not offer a word of balm or condolence to those who are grieving,” says the bishop who oversees the church. Washington’s mayor was more direct: “Shameful!” NPR

‘Look up at the trees, think about wood’: government logging ad uses images of pristine native forests. Agriculture department spent $95,000 on campaign for the Australian forestry industry promoting wood as ‘the ultimate renewable’. The Guardian

Yesterday was a day of domesticity, this morning we left at six for the World Heritage Dorrigo rainforest, but having become a photographer I have to stop along the way. 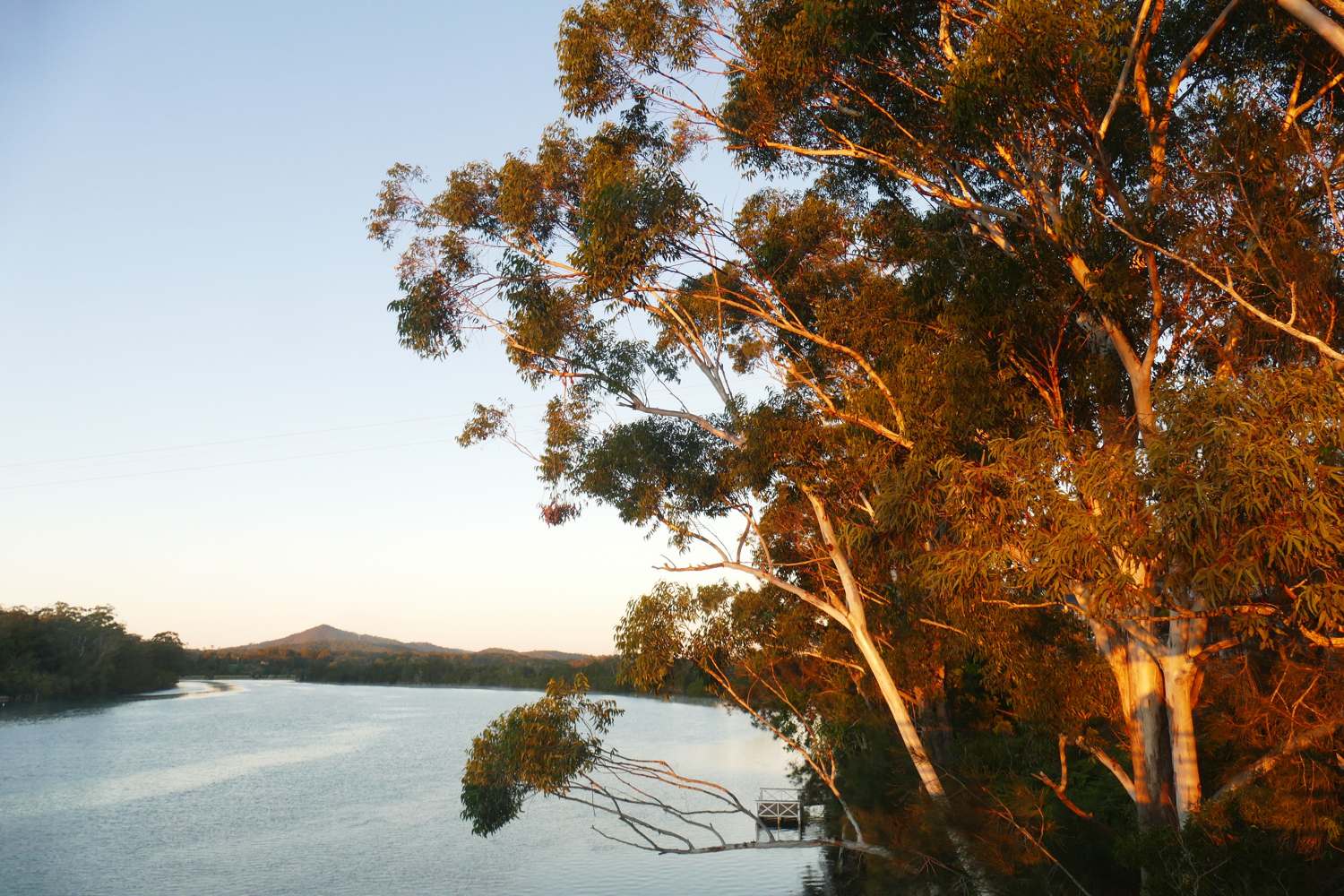 Especially for a rare view of the Sacred Mountain overlooking us, Nunguu Mirral (Nunggu Mirral, Nunguu Miirlarl) from down the Kalang. Rare, because the bridge has no footpath on this side, but this early no traffic. 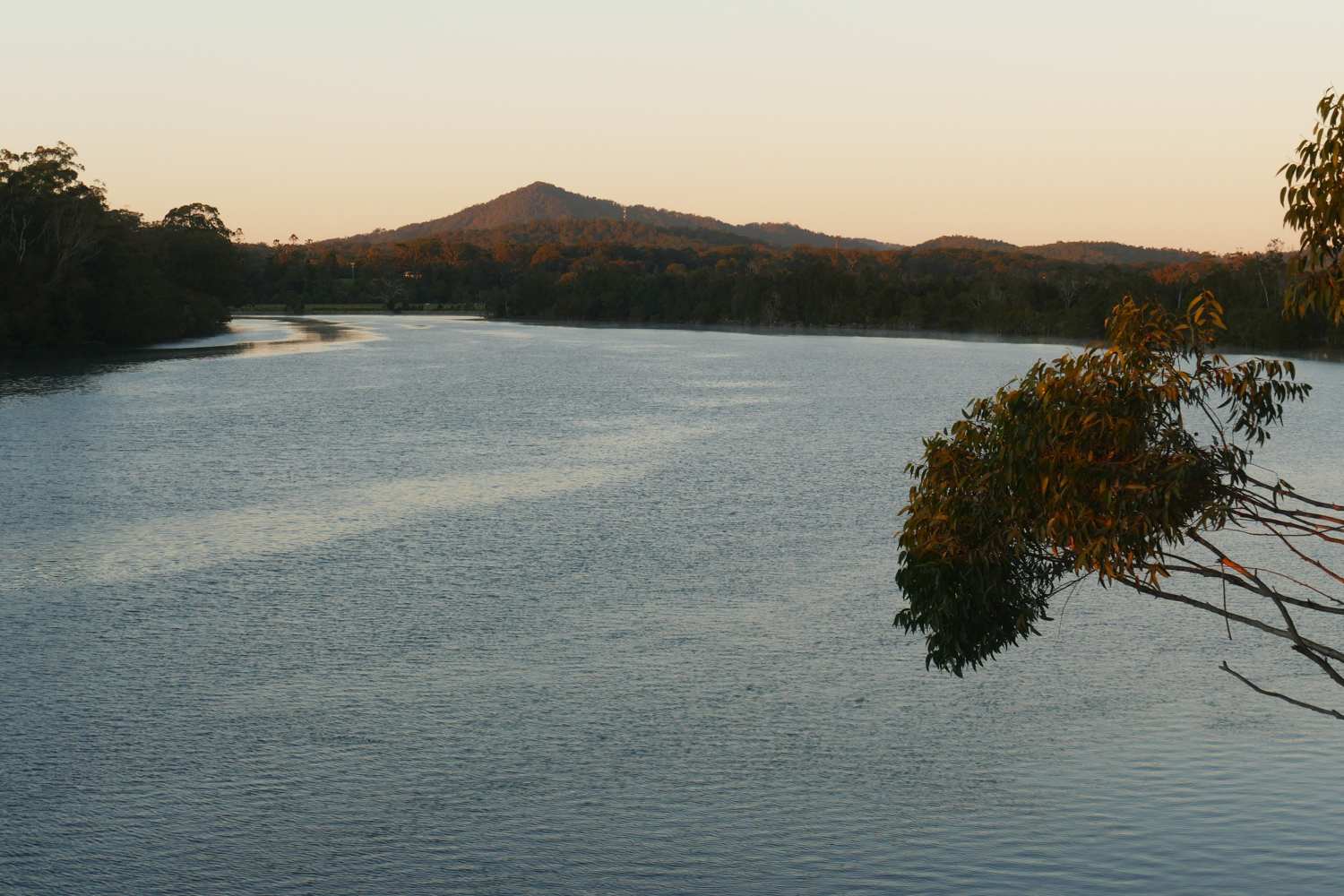 We picked up croissants in Bellingen, from behind the Emporium, first customers of the day. 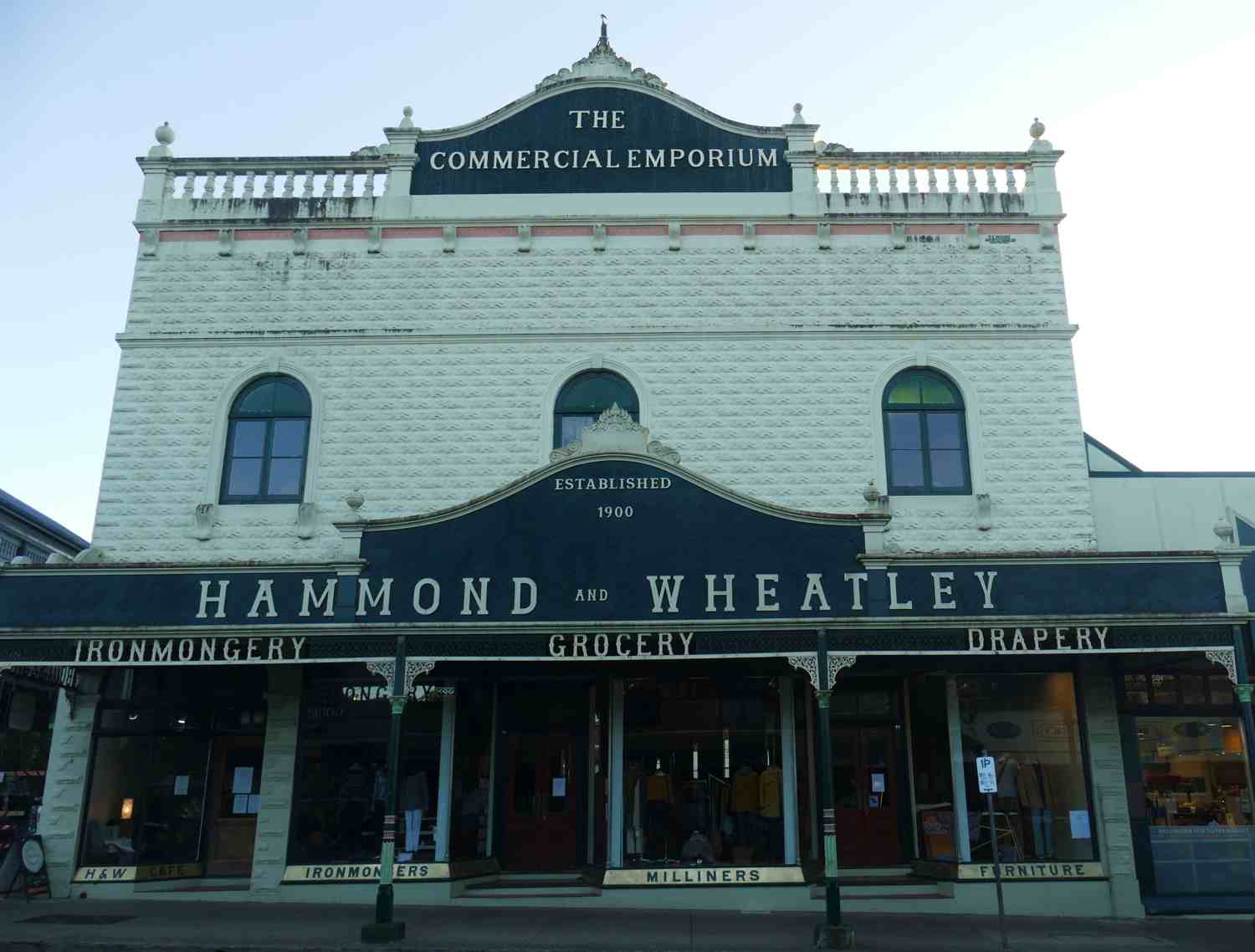 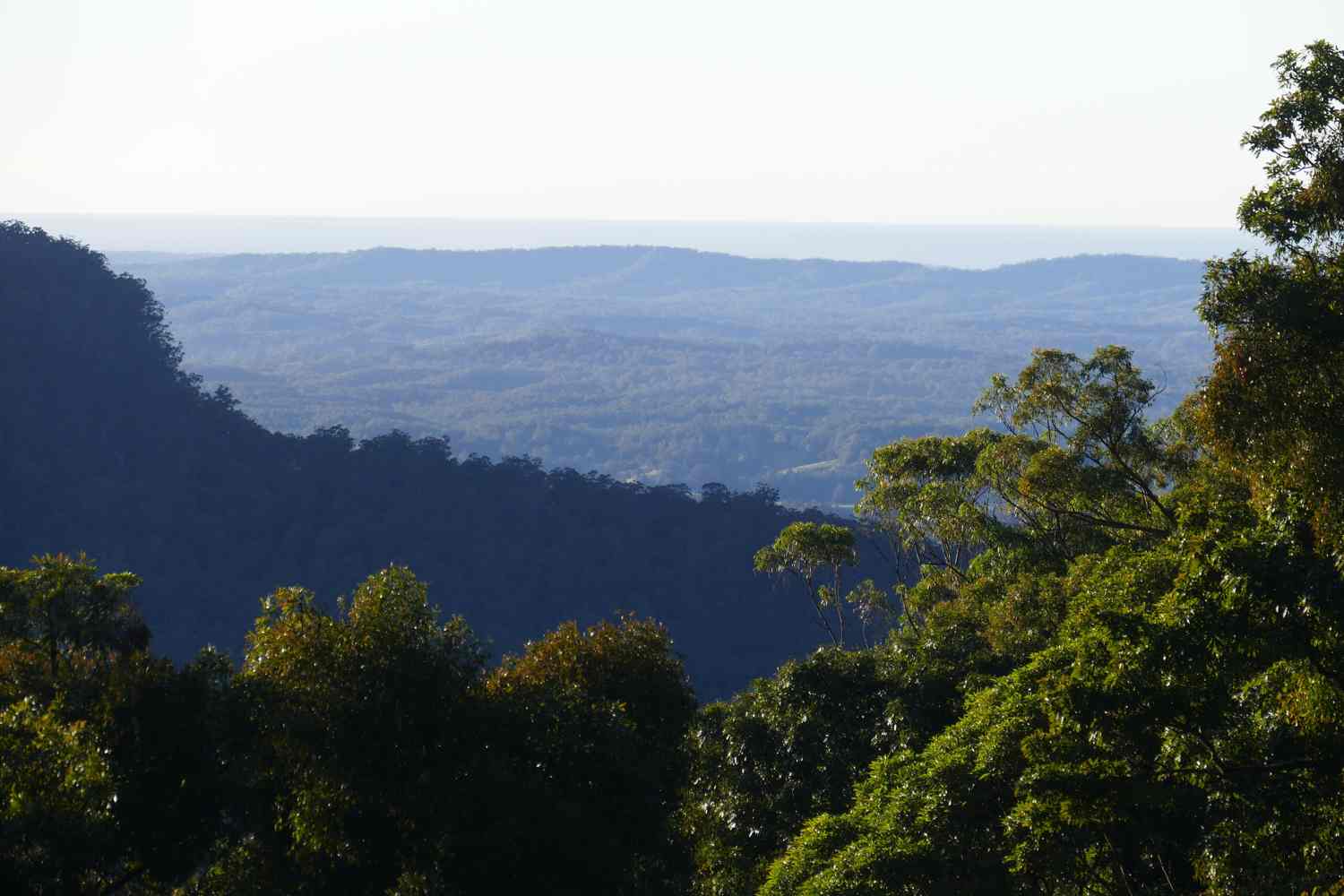 View of the sea from the mountain road, Waterfall Way

Climbed up the mountain through two sets of roadworks. This section of Waterfall Way is continually battling the gravity of a crumbling mountain. 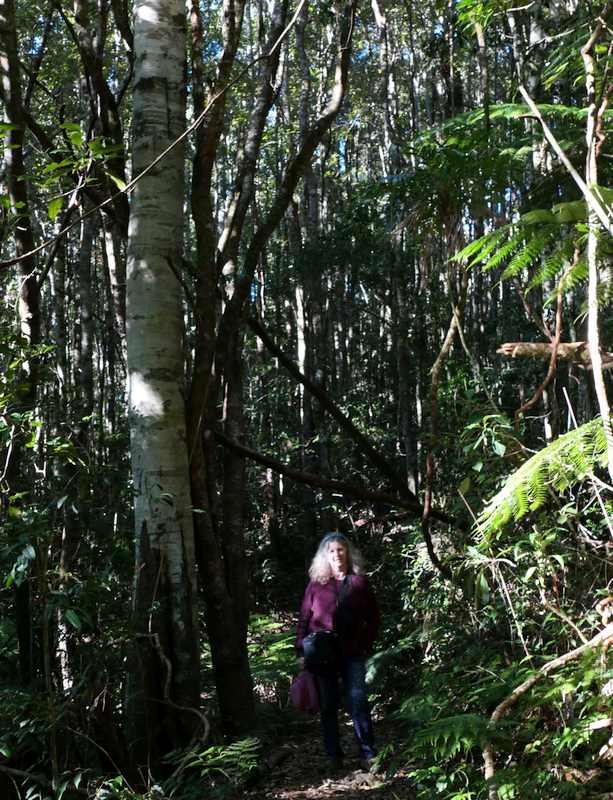 We avoid the main trail in case the opening, three days ago after more than two months, lured a flood of walkers. Head down a dirt road into the World Heritage area disturbing Top Knot Pigeons and Brown Cuckoo Doves.

We started off the Rosewood track (a friend calls leech walk) in 5 degrees (too cold for leeches)!! But soon we were triangulated by three male Lyrebirds running through their repertoire, whip birds, beginning higher than the real ones, Black Cockatoos, Kookaburras (not their strongest mimicry), Bowerbirds and more. We stood rooted in wonderment. 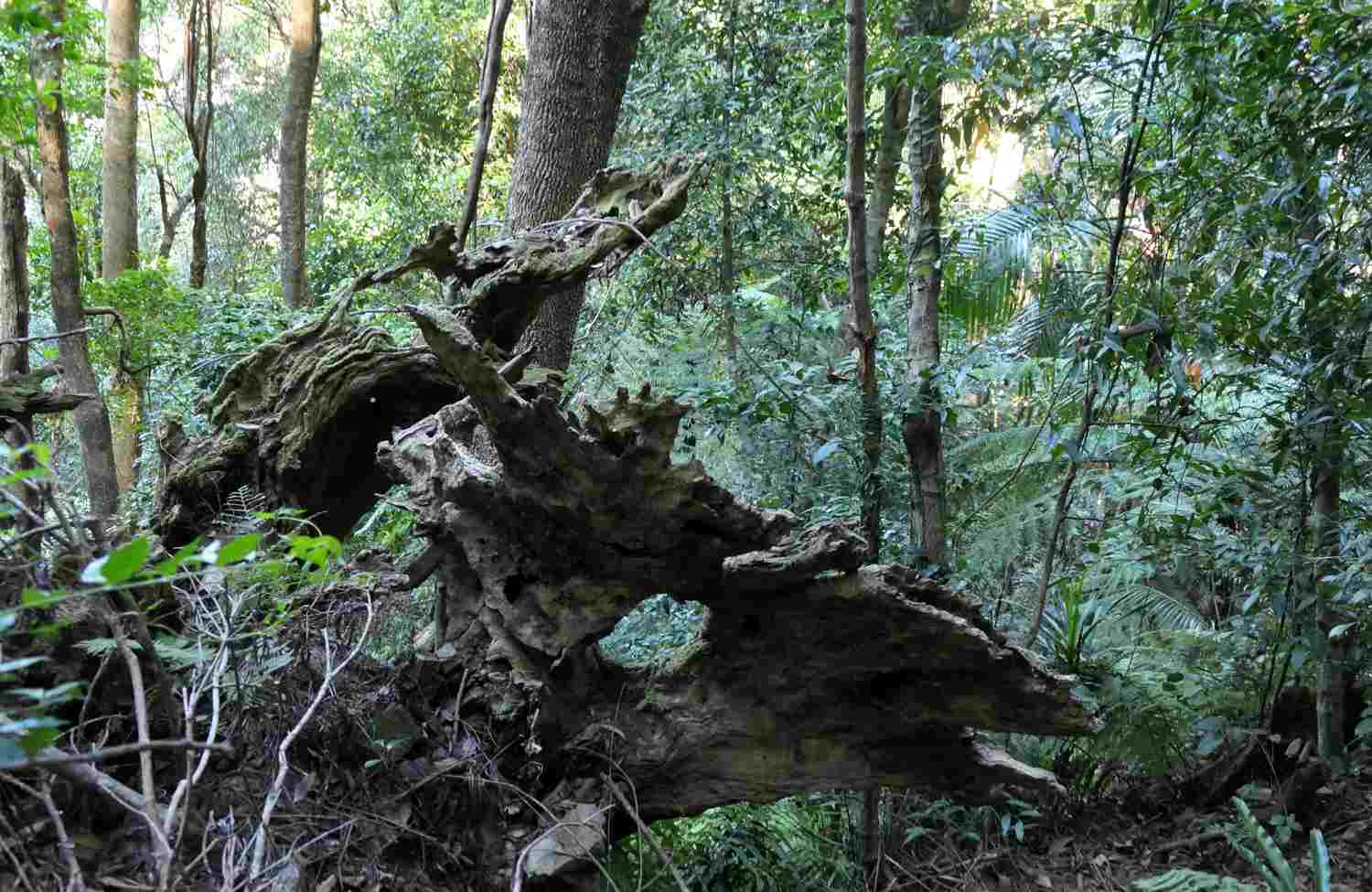 The birds hidden by the flowing screen of vines and trees though up here  the temperate rainforest has an open canopy  of mainly coachwood and sassafras. 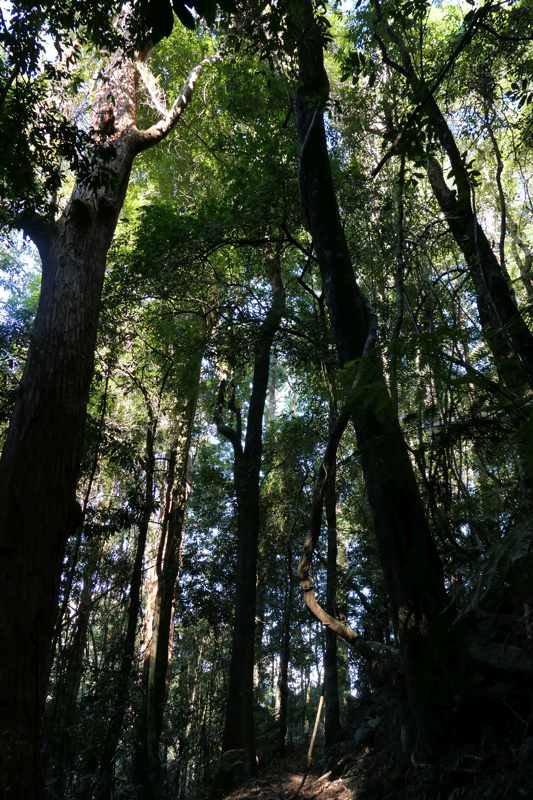 A characteristic feature of this type of rainforest is the variety of tree species in the multi layered canopy. Some common ones are. Buttressed trunks, palms, thick woody vines and epiphytic orchids and ferns are also common, adding to the picture of luxuriant vegetation. 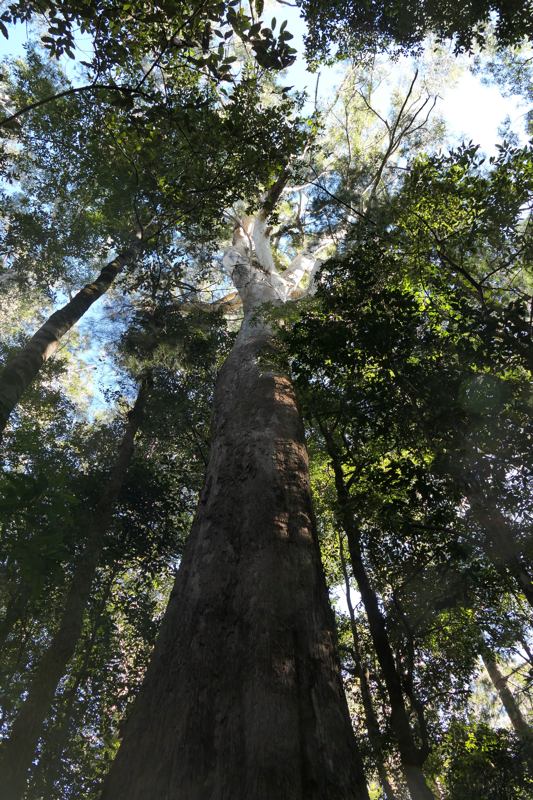 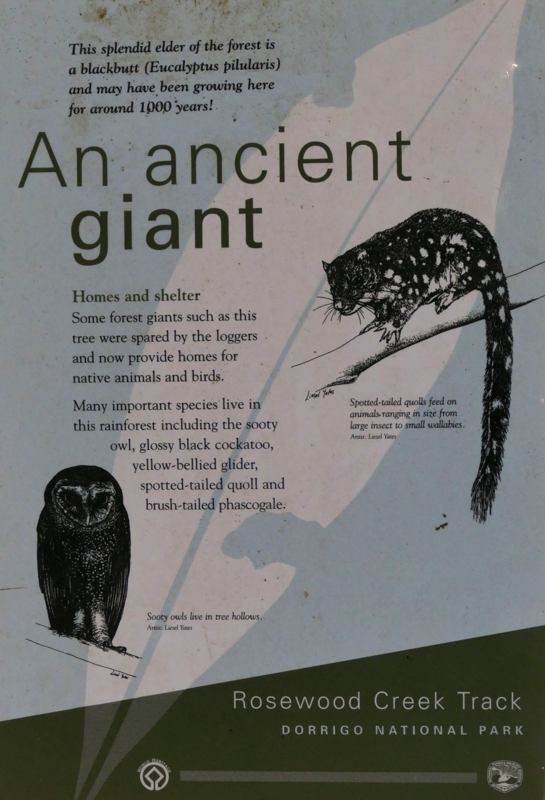 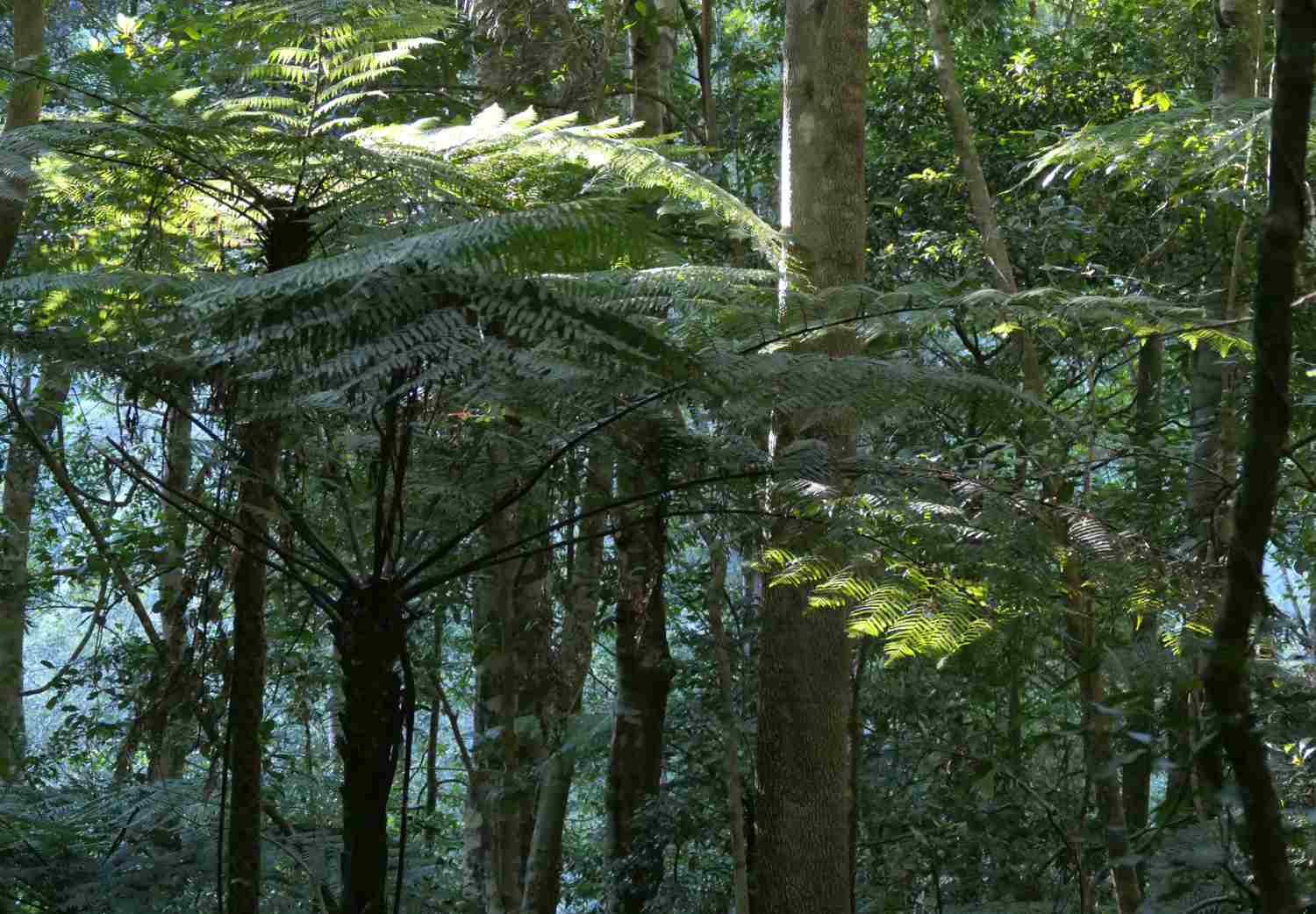 The track winds along the Rosewood River. 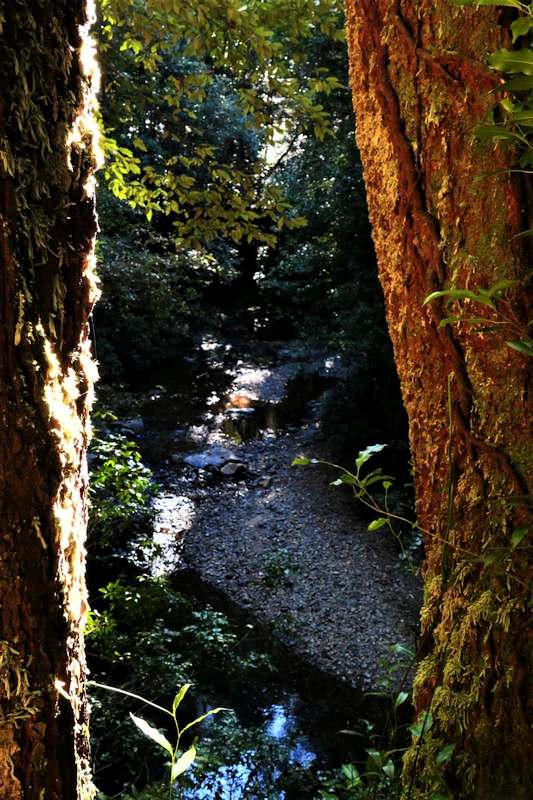 We pass through the denser rainforest, darker with layers of canopy, darker leaves trying to catch every lick of light. The heavily butressed yellow Carabeen and, Booyong, the Alien-like strangler figs and giant stinging trees, their large heart shaped leaves always peppered with holes, though I have never seen any insect eating them.[1]

A sighting of a Logrunner flying away, plenty of fungi 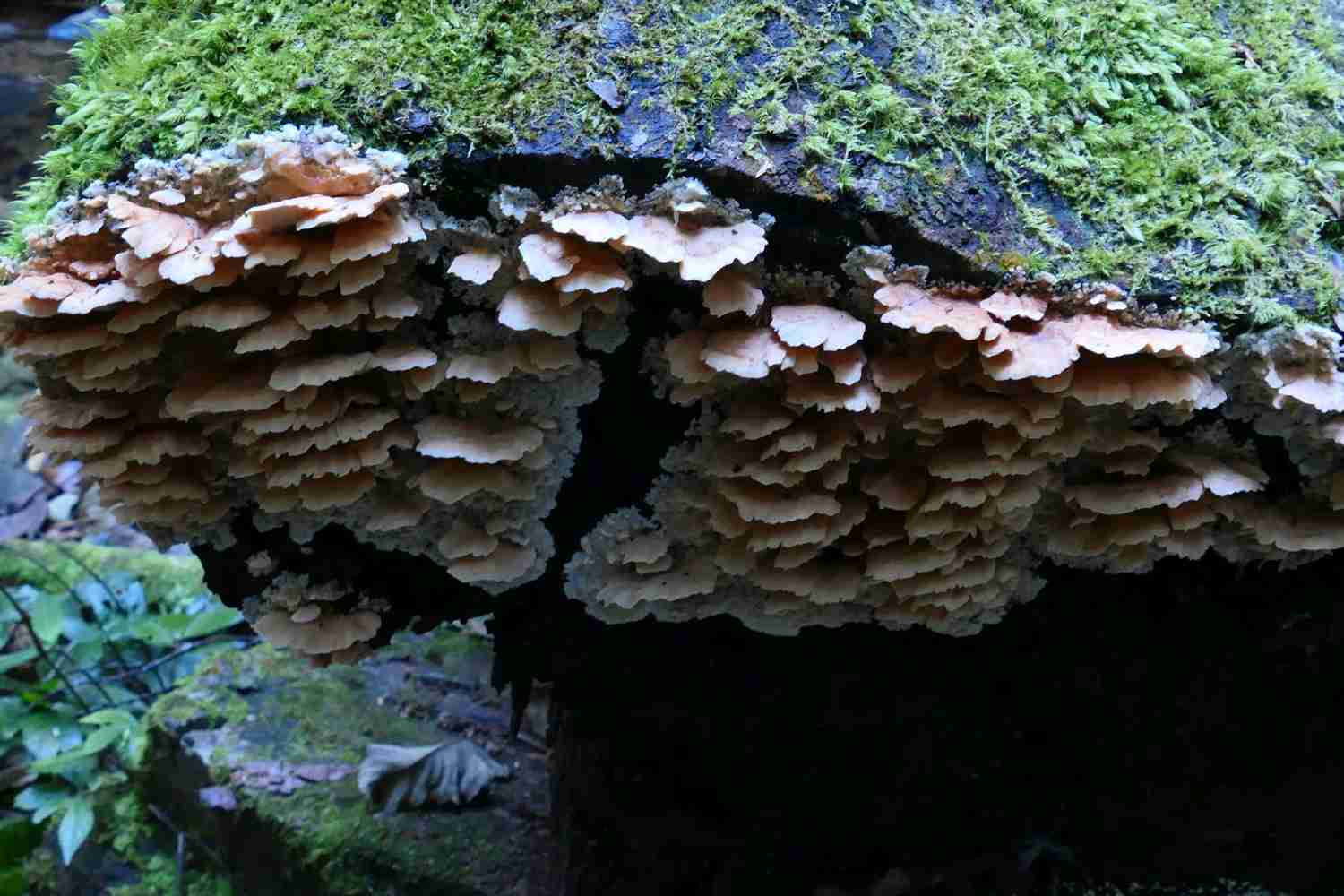 and fruit and flowers on the track. This Dorrigo Plum breaks in half, as if cut: 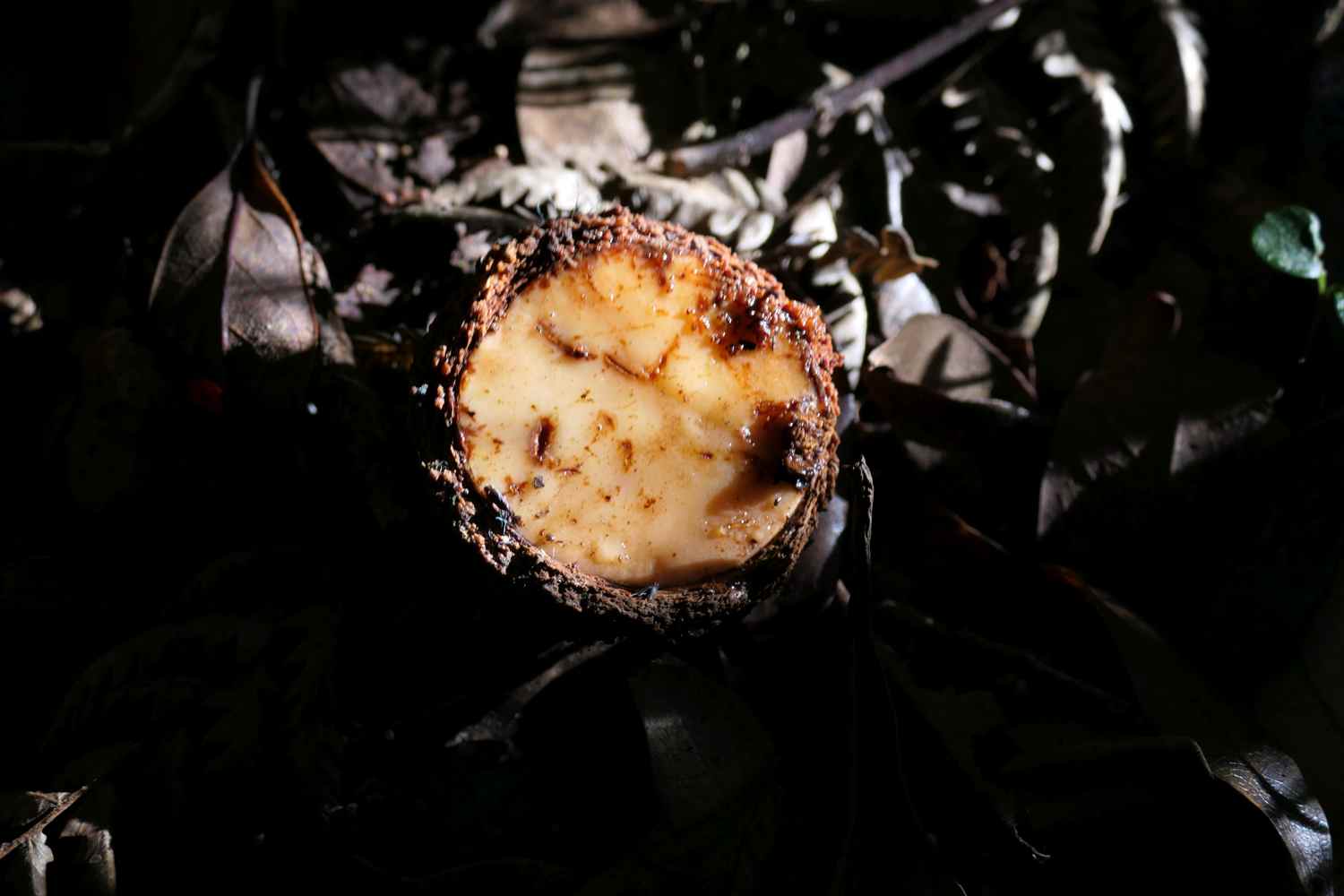 We reach the Coachwood Falls. 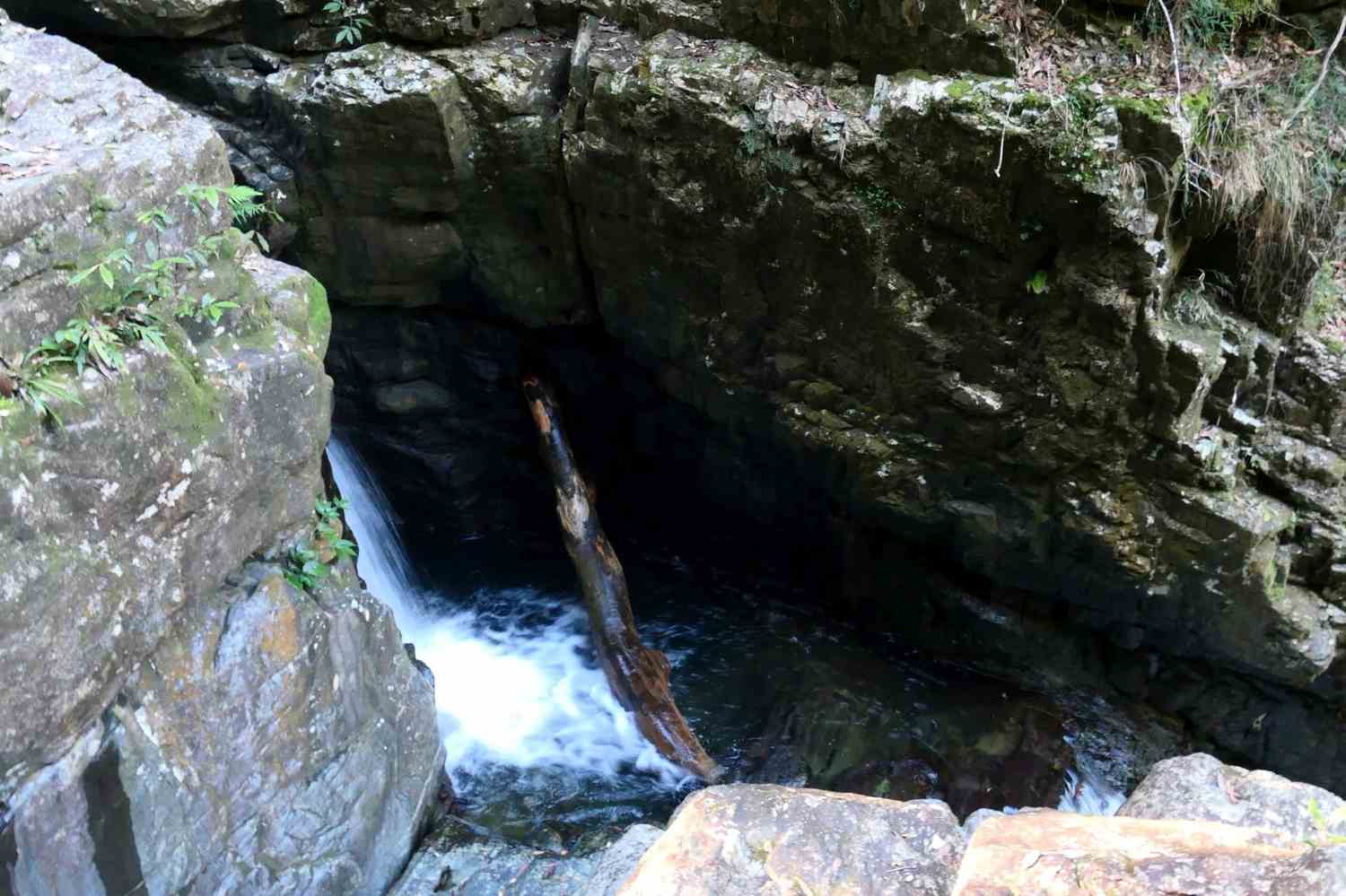 In the dim light the water pouring through the lens is soft, its fractals smoothed. 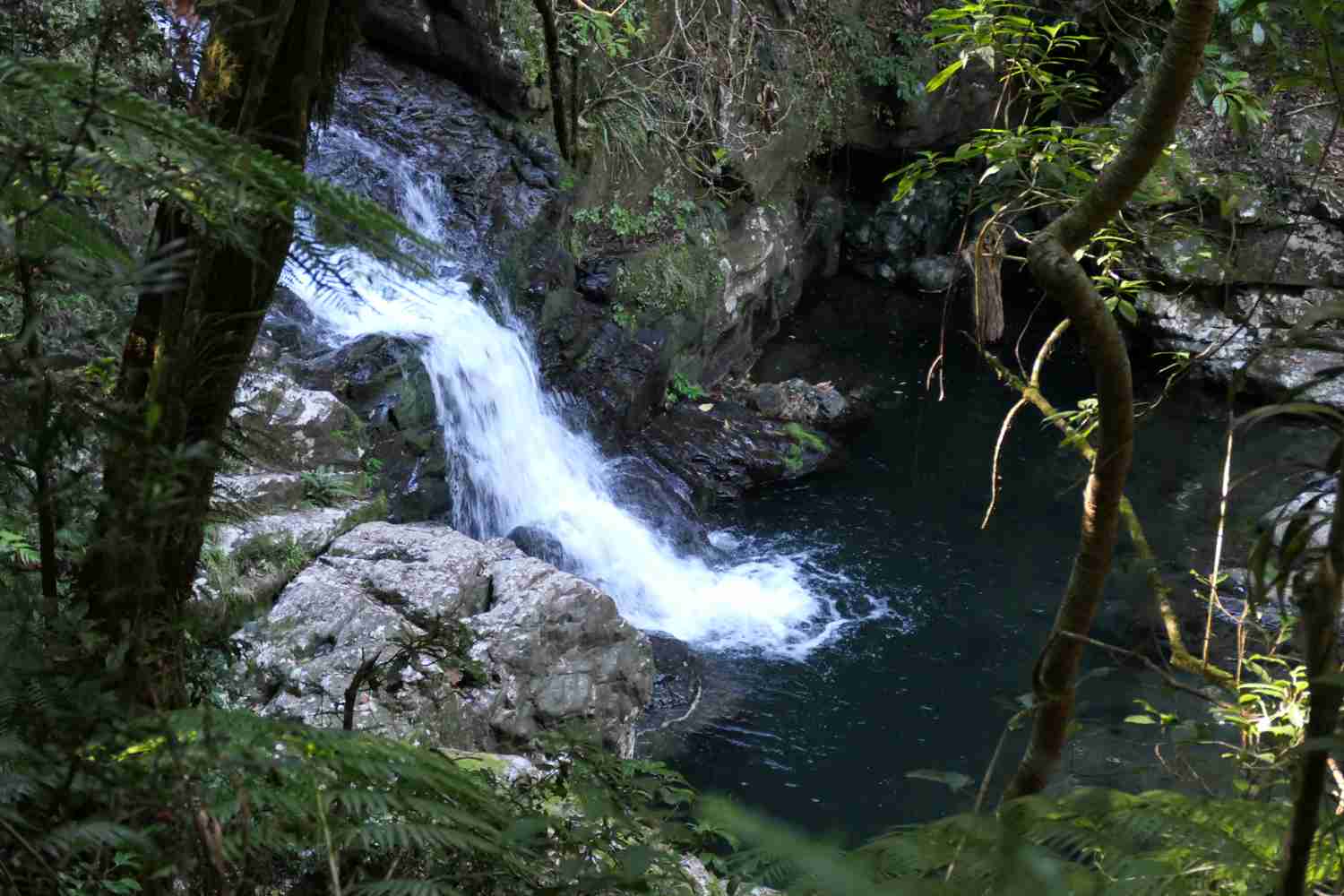 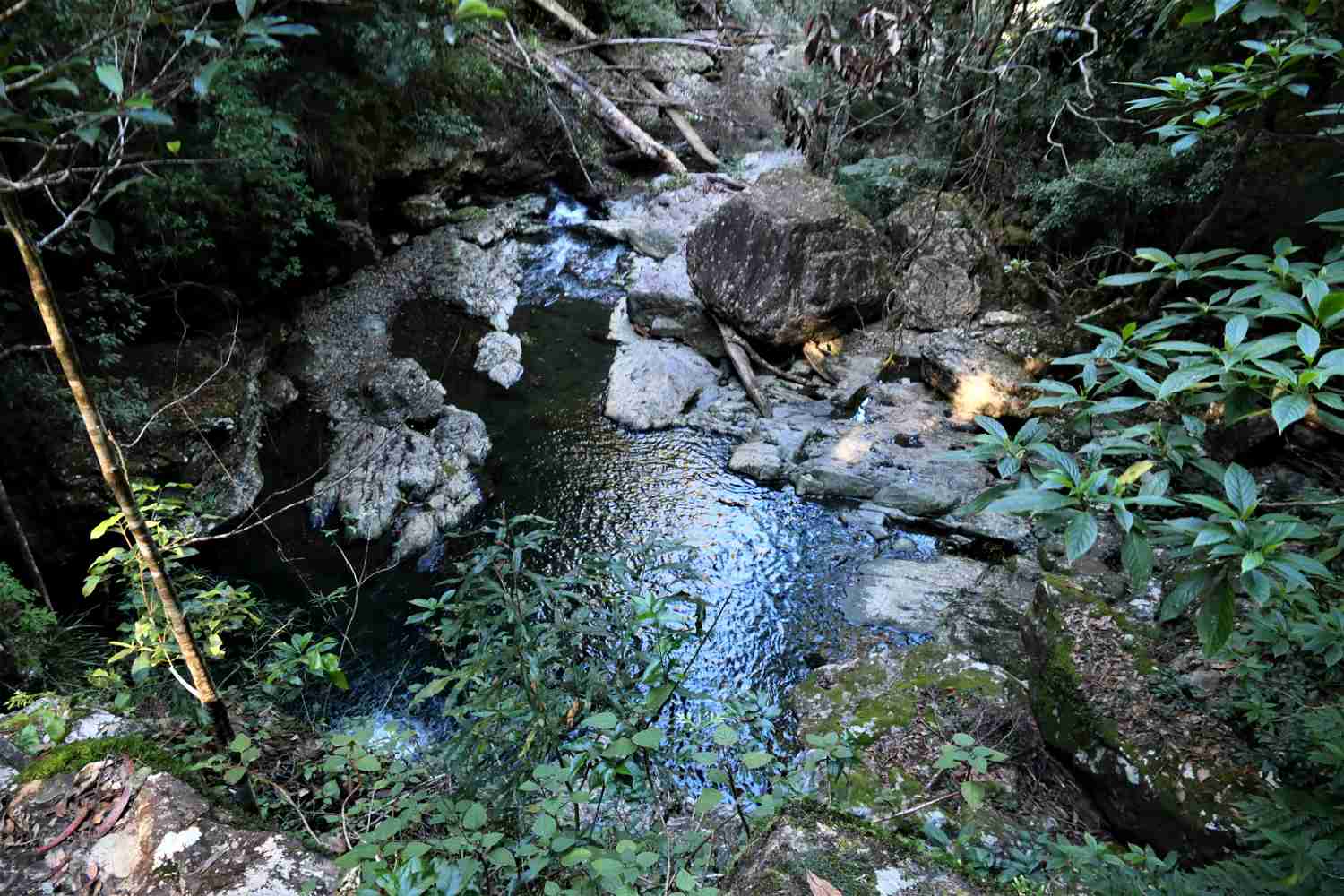 Climbing back up we pass to the ridge we pass the ghosts of history, the eyes blank, the giants toppled. 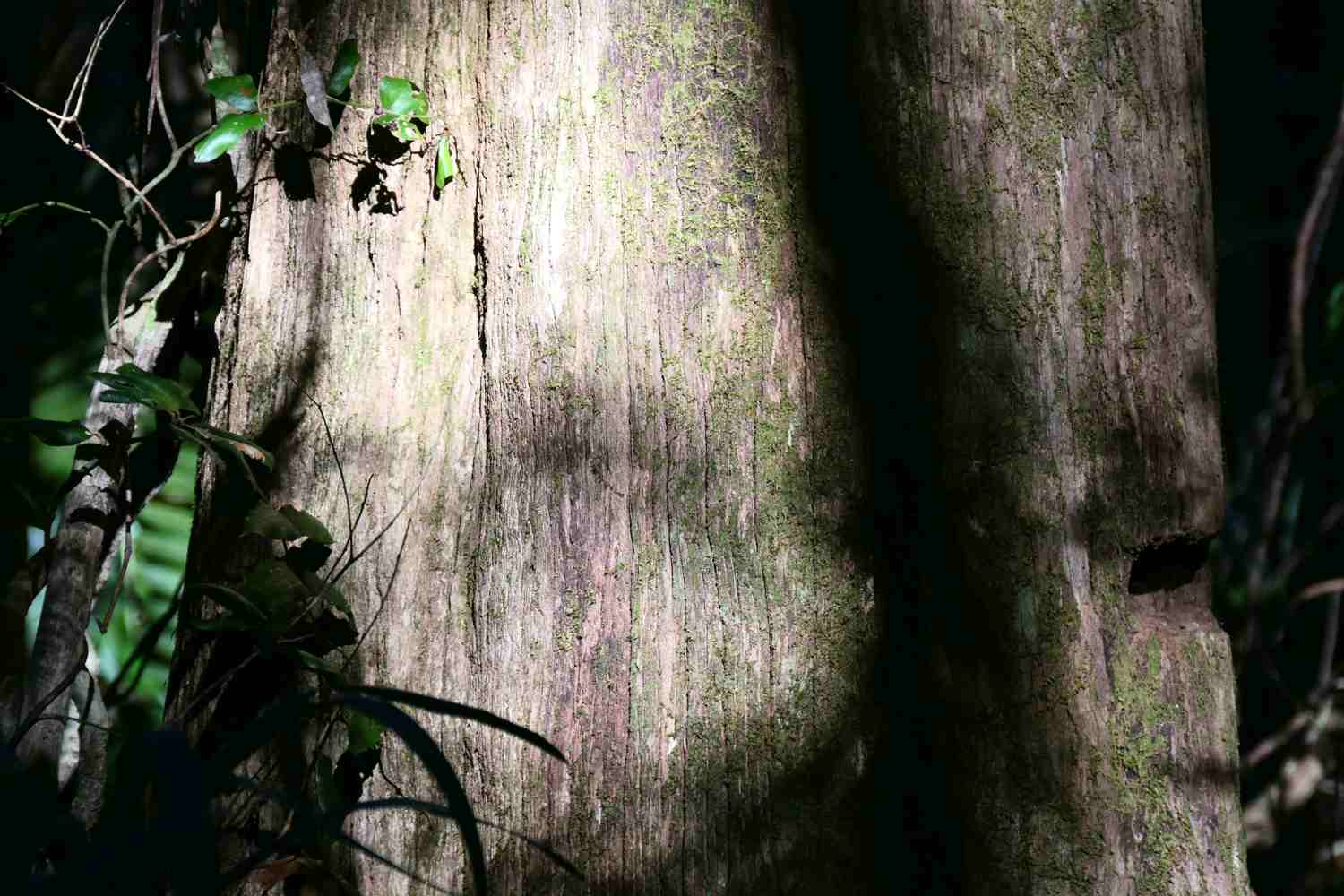 Each giant tree was a metropolis of life, feeding and housing a huge variety of life forms. 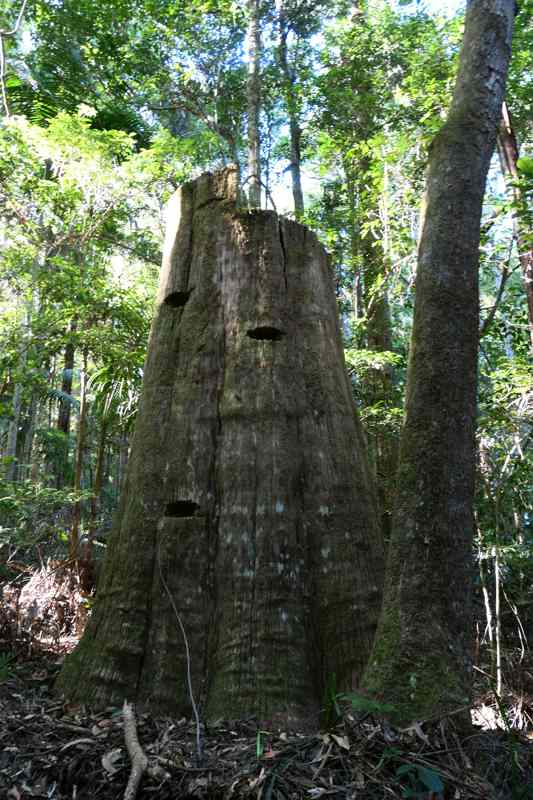 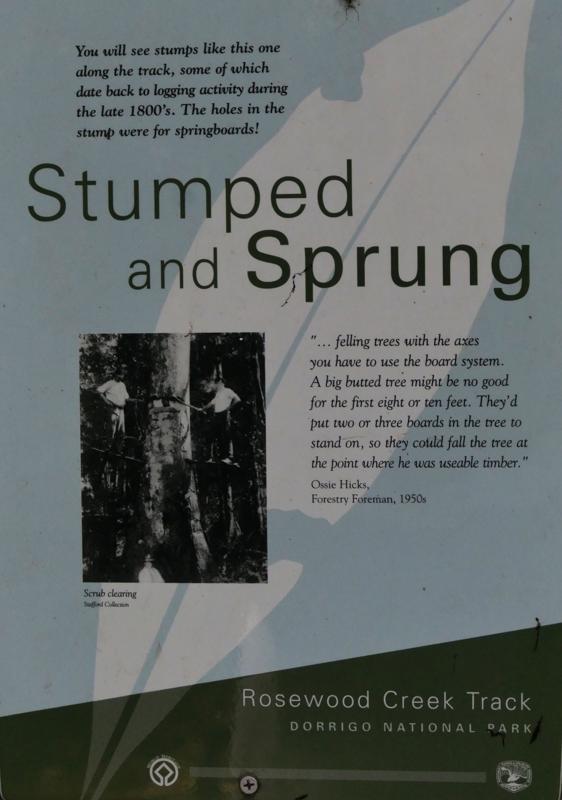 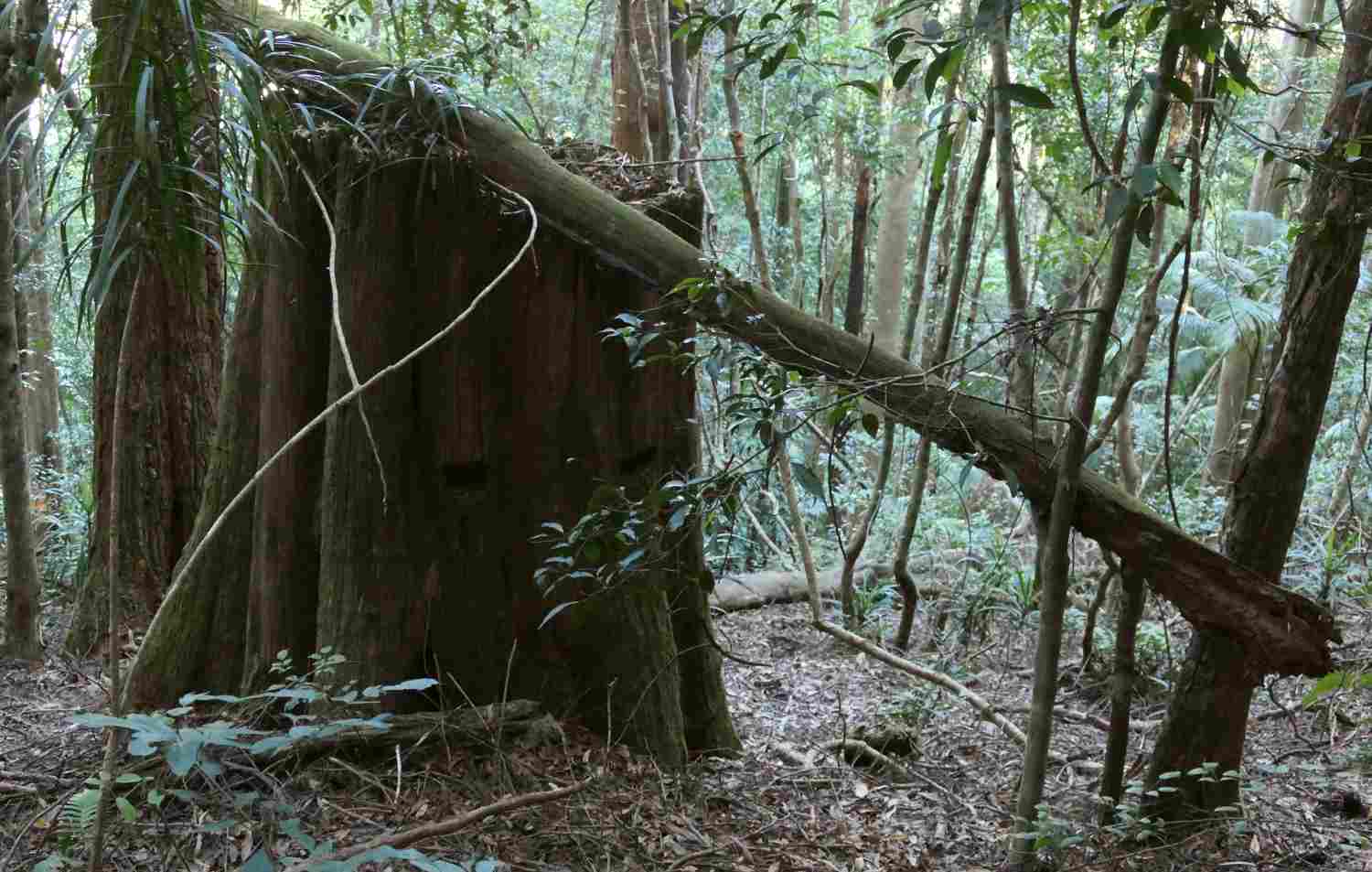 They began with Red Cedar and Hoop Pine, followed by Coachwood and Rosewood. The last to be felled were Blue Gum, Tallowood and Brushbox. A hierarchy of value. 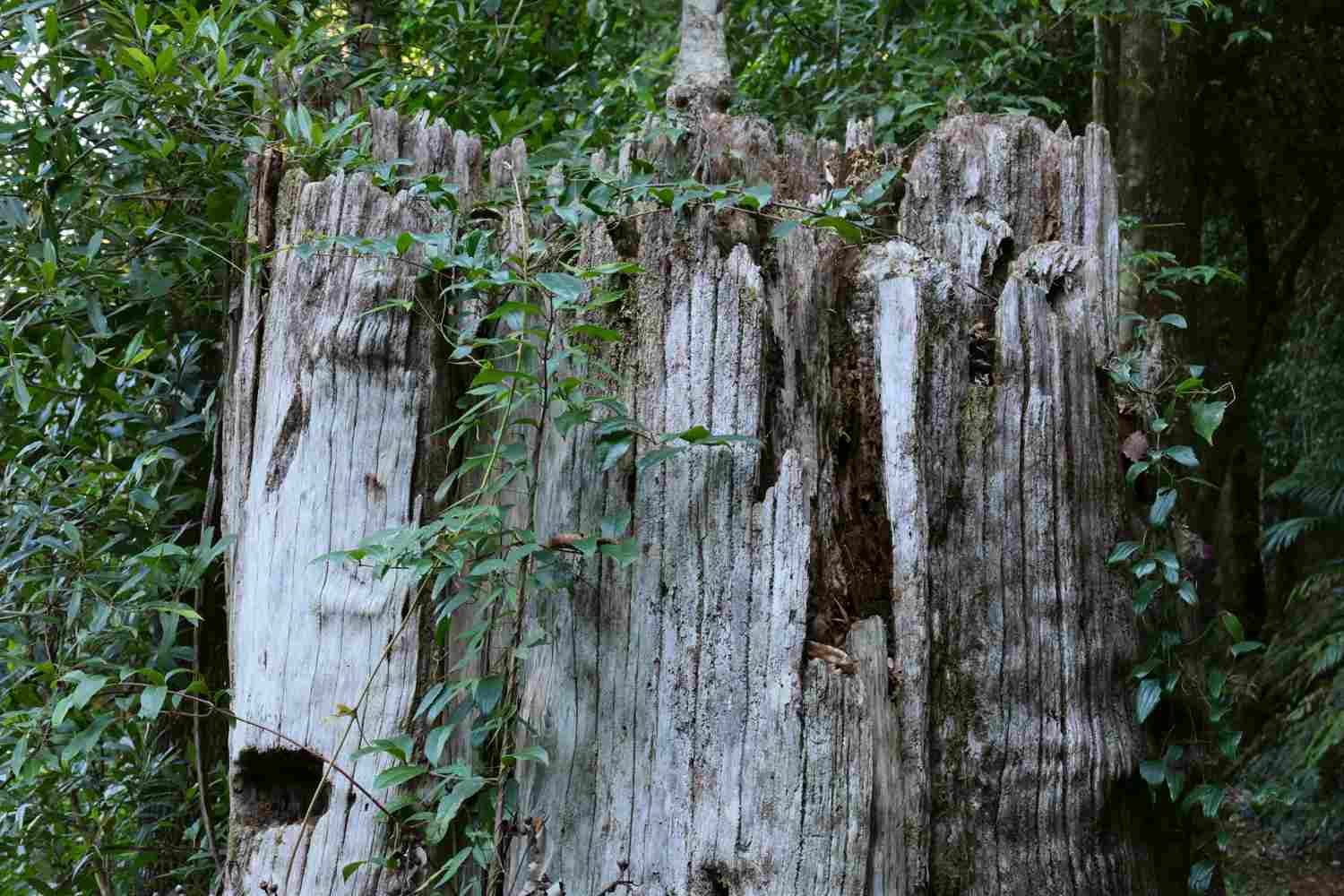 ‘Beginning and ending at Never Never picnic area, it offers a moderate walk for a leisurely afternoon. Time suggested: 1hr 30min.’ That’s much too fast to catch the Logrunners, Scrubwrens and Pardelotes, must have bene timed by a fit field officer. We took 3 hours and I struggled toward the end, my Ross River virus weighing me down. 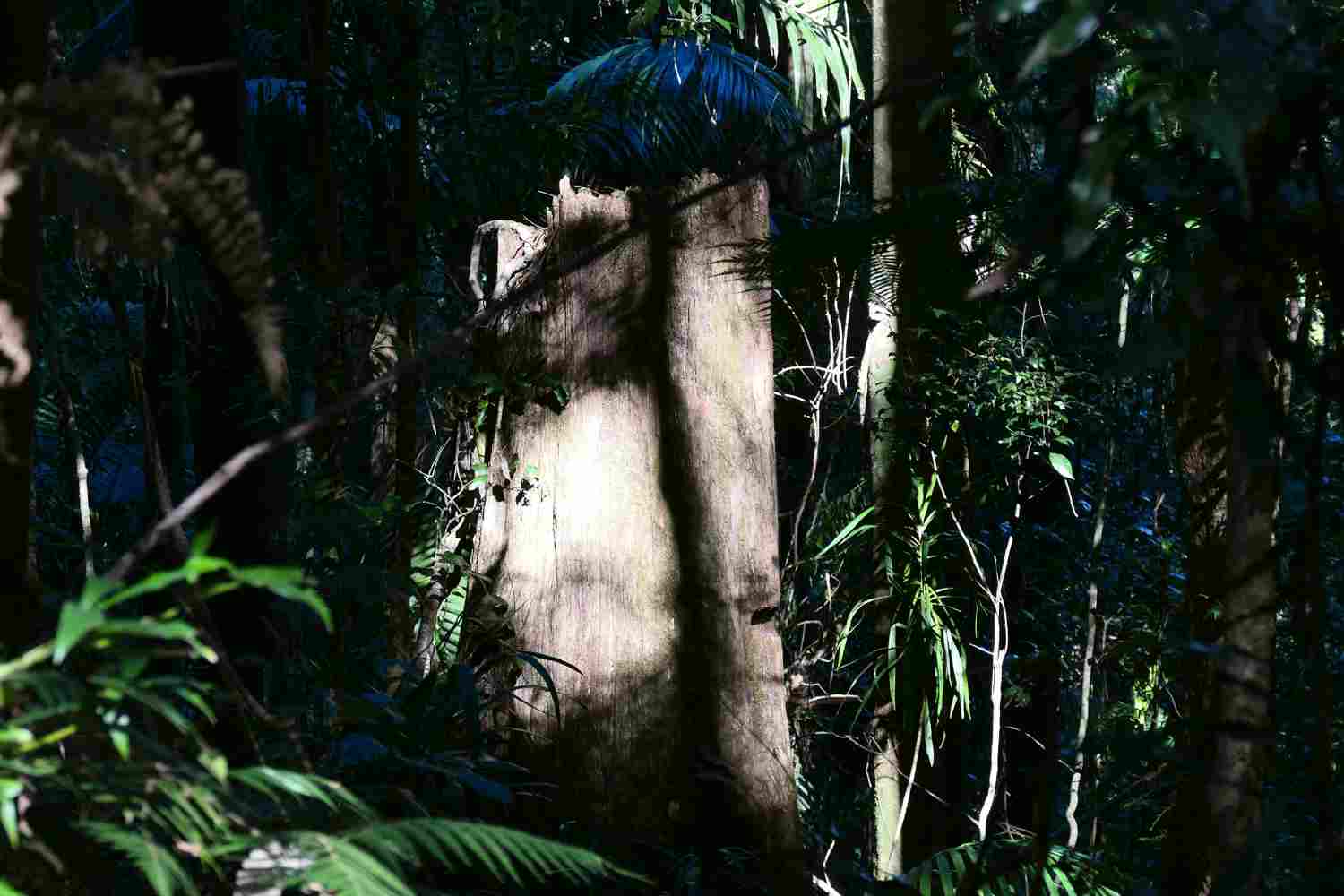 I was trying to think of all the rainforests I have been in: Vietnam, the Philippines, Malaysia, Sarawak, Sabah, Brunei, Samoa, Belize, Cape York, their immense darkness, heat, mud, leeches, mosquitoes, their beautiful stings and bites their sapping of your strength, and the unbelievably brief glimpses of the birds and animals, but none were like the Gondwana rainforest, oldest in the world, just west of where we live. The temperature was just 5 degrees, not even in the temperate rainforests of New Zealand’s South Island have I experienced such cold.

The worrying thing is so much rainforest was burnt in the November fires, areas of rich biodiversity that do not burn, but with climate change they can and do. At the same time, across the Pacific, the Amazon rainforest is being cleared at a faster rate. This is disaster for biodiversity, the wildlife and ecosystems, but also weather patterns and the global climate.

The plateau itself is beautiful: 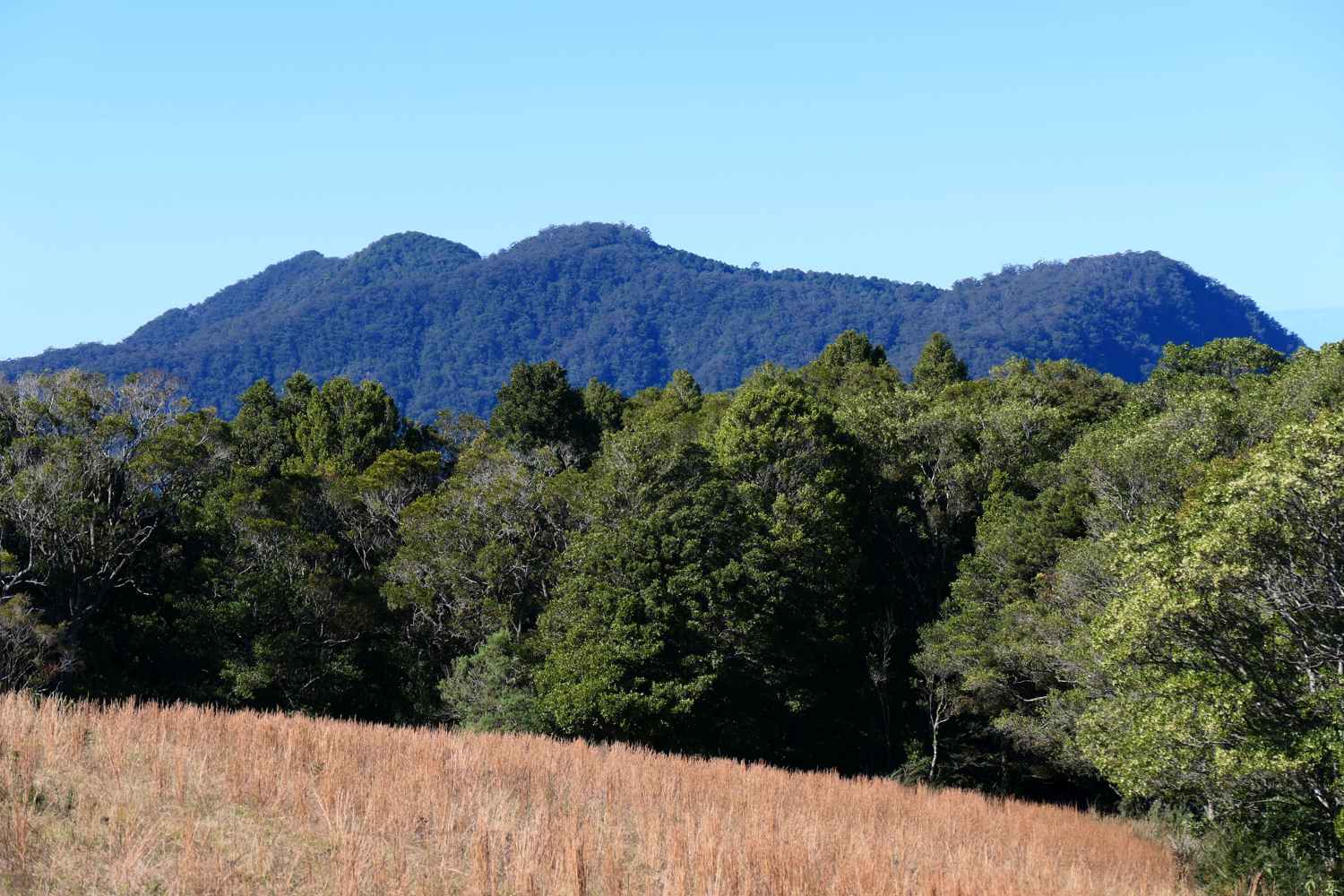 We detoured to Dangar Falls, just pass Dorrigo. (We had to take an additional detour because a car had crashed into the war memorial that served as a roundabout, The fallen digger had landed prone on top of of the car.) 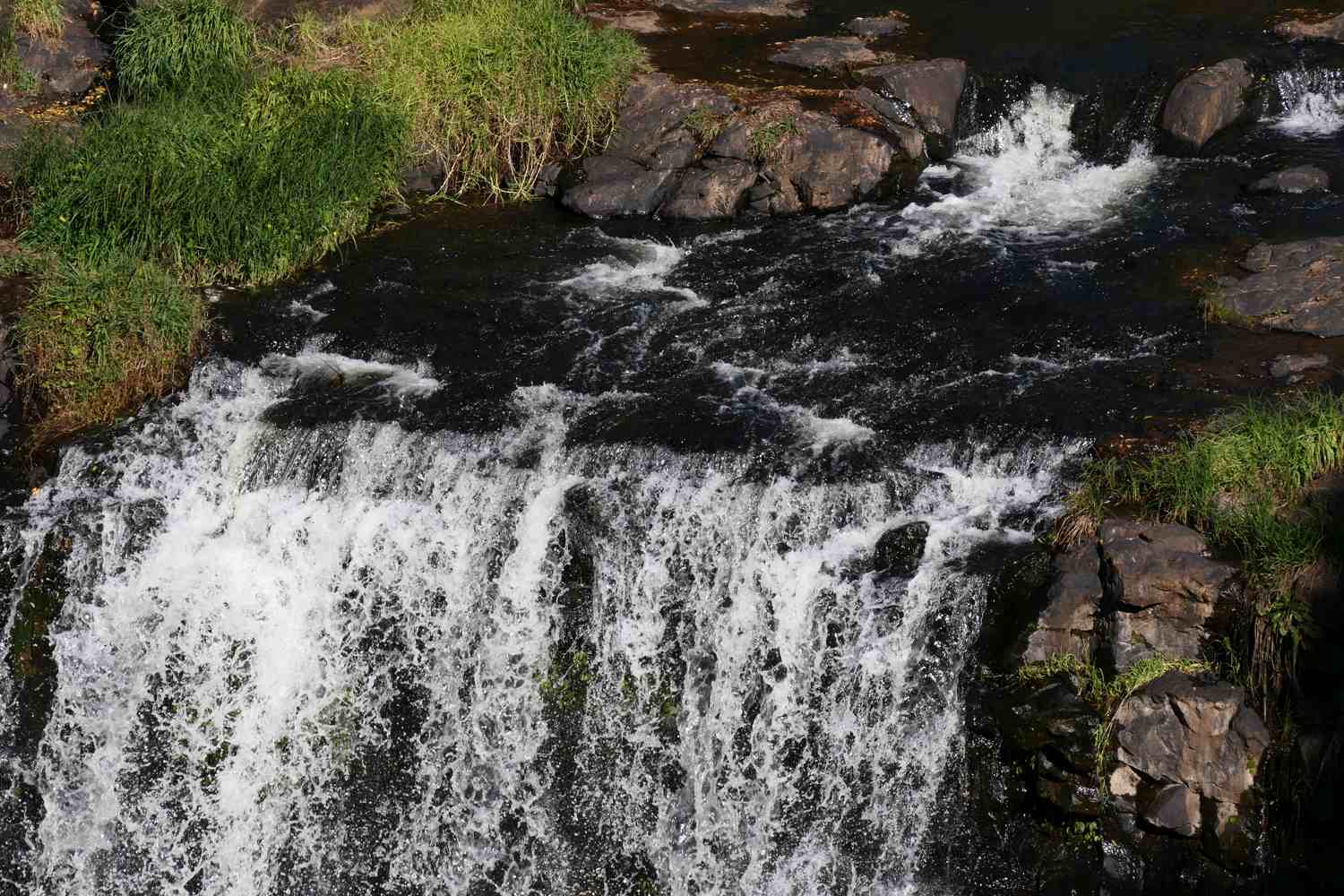 We watch Bangarra Theatre Company perform Terrain, choreographer Frances Rings, from the Opera House. Online content has surged during the lockdown. The first scene is disappointingly conventional, until the shields appeared. I noticed the polished gleaming floor, and think back to seeing them live, I am sure they used red earth, and I miss that giant of a man who moved unlike any other dancer (and whose name I have forgotten). The second scene with the women is fantastic with unique movements, otherworldly, jagged and beautiful.  We don’t stay, the direction is predictable and dance is best alive, live.

Listened to Billy Bragg on the radio:[2]

‘There is a war on empathy . . . as musicians we have opportunities to express that.’ The world has changed with digital music freely available. ‘Music was our social medium, now if you are a young person . . . music is no longer the first call for political activism.’ Yet people are going to gigs and festivals for a sense of community – ‘you have a sense of solidarity from that.’

Social solidarity is the key theme underlying his new book The Three Dimensions of Freedom (liberty, equality and accountability). Social solidarity (not ‘the Blitz spirit’) is what the UK showed during this pandemic despite the government’s shambolic performance with a terrible mortality rate. People wanting that sense of solidarity of solidarity is why Churchill lost the 1945 election by a landslide to Labour after the war despite the role he played in the victory (and the highest ever approval ratings of 83% for an incumbent Prime minister (May 45).[3] Free speech is important, but you have to be accountable for what you say as well as your actions.

With every action, my administration is restoring the rule of law and reasserting the culture of American freedom. Donald Trump[4]

Transcendent terms cannot be received from on high, terms such as democracy, freedom, justice, have to be earned and worked for. Our challenge is to create a social space of co-operative responsibility – for the old, for babies, for the environment, and for each other. One full of opportunities in diversity, freedom from (hunger, pain, discrimination, violence) and freedom to (use one’s abilities, explore the world, play). This is what the mass demonstrations now occurring throughout the USA is about.

Convivial society is the result of social arrangements that guarantee for each member the most ample and free access to the tools of the community and limit the freedom only in favour of another member’s equal freedom. Ivan Illich [5] He thought we need convivial tools to help improve society, ones easily used, available to everyone as often as needed or wanted (and for any purpose). As consumers we neglect tools and as consumers we lack freedom with real choices.

Jacque Ellul warned (back in 1954!) that we don’t have ‘convivial tools’: ‘To say that man should remain subject rather than object in the technological society means two things, viz., that he be capable of giving direction and orientation to Technique, and that, to this end, he be able to master it. Up to the present he has been able to do neither.’[6] He noted that technology, ‘technique has arrived at such a point in its evolution that it is being transformed and is progressing almost without decisive intervention by man.’ And now is beyond the ordinary person’s control – were are being trapped, our freedom narrowed.

And Zygmunt Baumaunt warned that the failure of communism leaves us in danger of capitalism reducing notions of freedom to the choices one faces as a consumer.[7]

(There are more than a thousand cereal brands currently on the market in the USA).[8]

[1] I look it up. ‘The leaves are replete with stinging hairs, and are eaten by various insects and mammals, such as the chrysomelid beetle. The fruit is eaten by many rainforest birds including the regent bowerbird and the green catbird. Indigenous Australians used the fibres to make nets and lines. severe stinging can last for months. Dendrocnide stings have been known to kill dogs and horses that have brushed against them. Marina Hurley, a leading researcher of stinging trees, found the only way she could handle the plant to study it was with heavy welding gloves.’ https://bie.ala.org.au/species/https://id.biodiversity.org.au/node/apni/2889839

[3] December 1942, the publication of the Beveridge Report, a comprehensive manifesto of social reform, with social security, a National Health Service and a full employment policy. Labour campaigned hard for its adoption.

[4] The President’s State of the Union address to a joint session of Congress. February 4, 2020.

[7] Zygmunt Baumaunt, Intimations of Mortality, 1994. We have more choice than ever yet live in a one party state (the parties differ little of fundamental values).