Coronavirus research updates: The nose could be the body’s entry point to infection. Nature

Coronavirus job losses in Australia mapped by electorate. The Guardian. [Our region is the worst hit in Australia.]

A fire extinguisher, a suit and 14 million plastic particles: after a storm, microplastic pollution surged in the Cooks River. The Conversation[1]

Why are sunrises and sunsets so spectacular during autumn and winter? ABC (The secret to stunning skies lies in the cold, the Earth’s tilt and the cloud formations).

For fifty years, Bob Dylan has been writing about the end of the world. What does he want us to know about it?  Crime Reads[2]

Rugby league is well and truly back as Eels flex their muscle to reboot season. Sydney Morning Herald

7am. I drive to the logging protest which is joining an indigenous tent embassy for Reconciliation Week. I drove around, it wasn’t where it was last week, couldn’t find it. Passed trucks leaving loaded with dozers.

I felt a little relieved, not feeling well, so went to the river’s peacefulness.

A Willie Wagtail stands his ground, and close up you can see why. 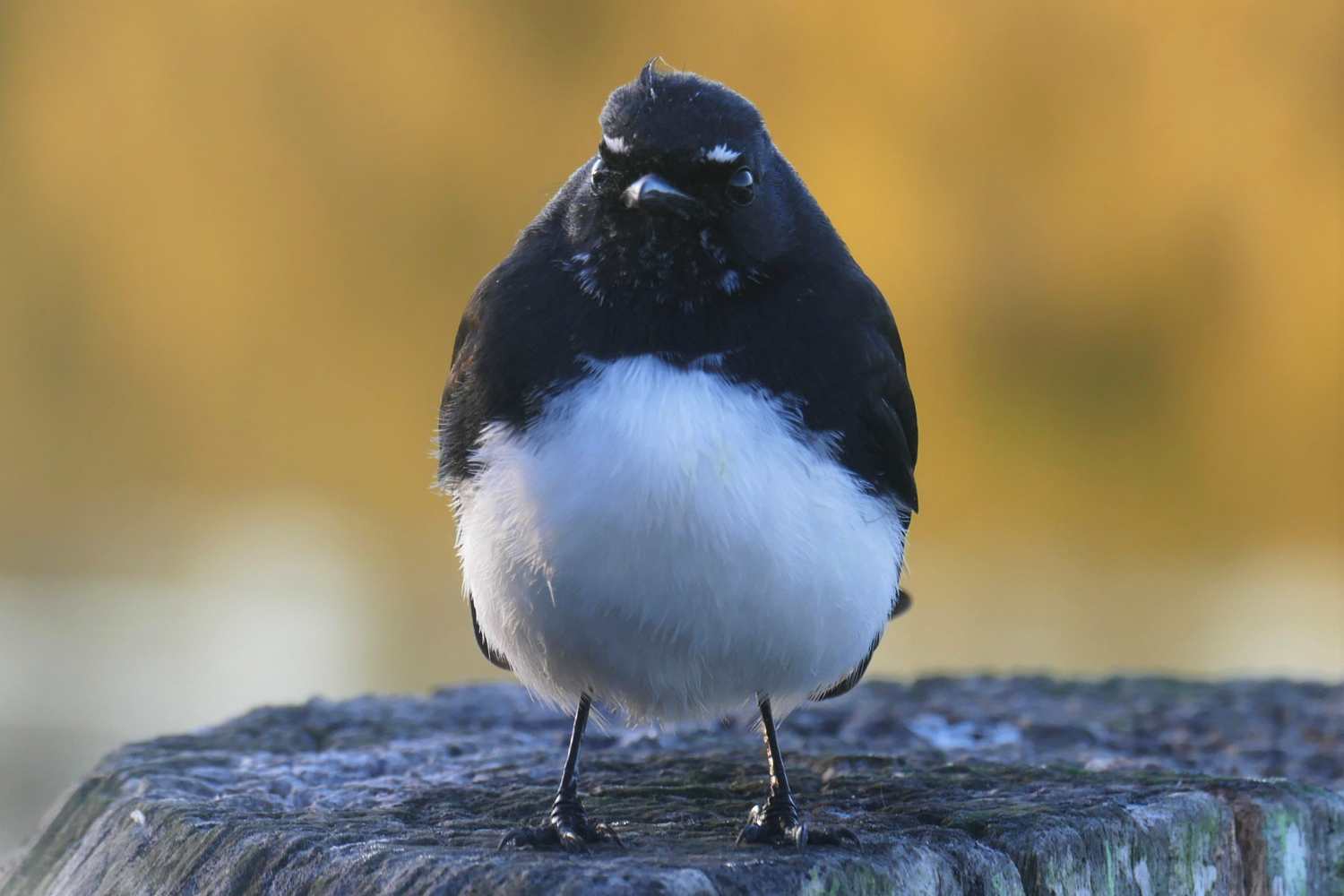 Opposite is Stewart Island where there was a Gumbaynggirr camp. It used to flood and they were removed to the Mission in the early fifties I believe. 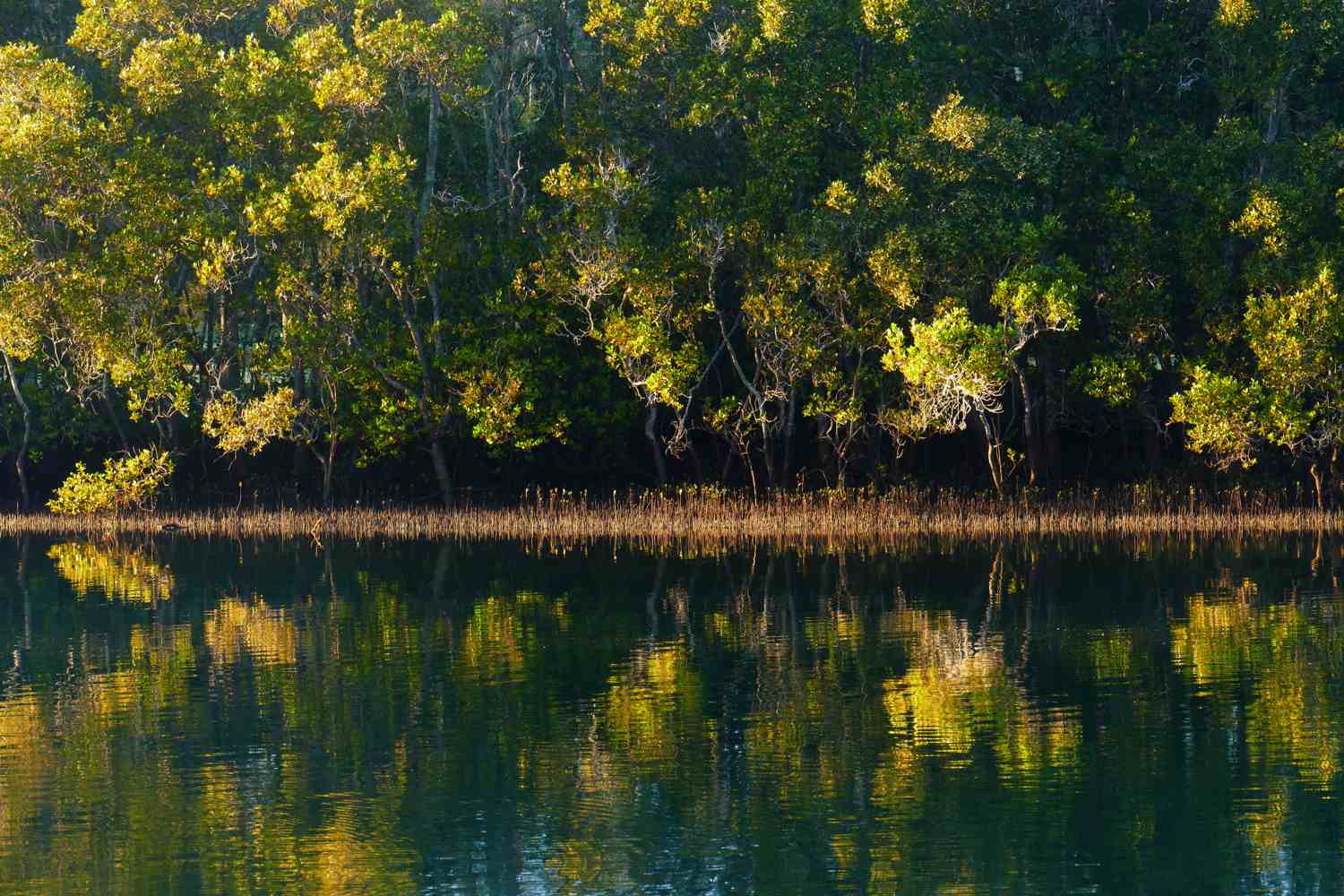 There is still a bora ground on the island and a midden. 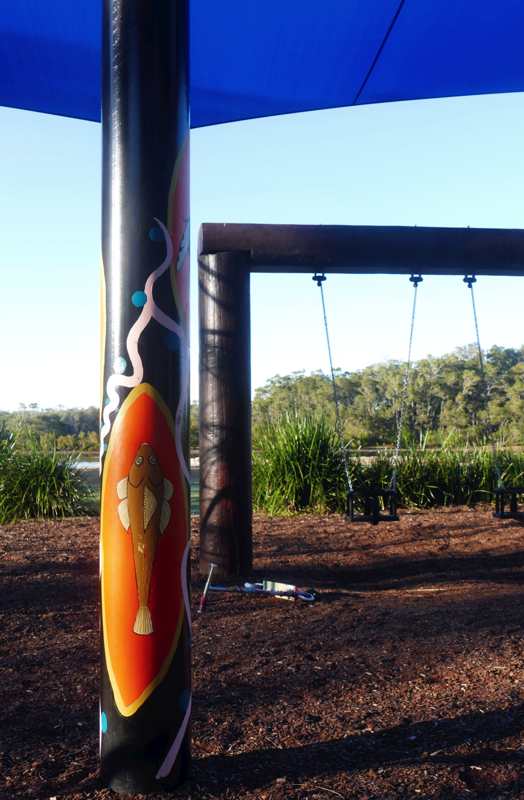 Getting back I walk with Wyn into Jagun. 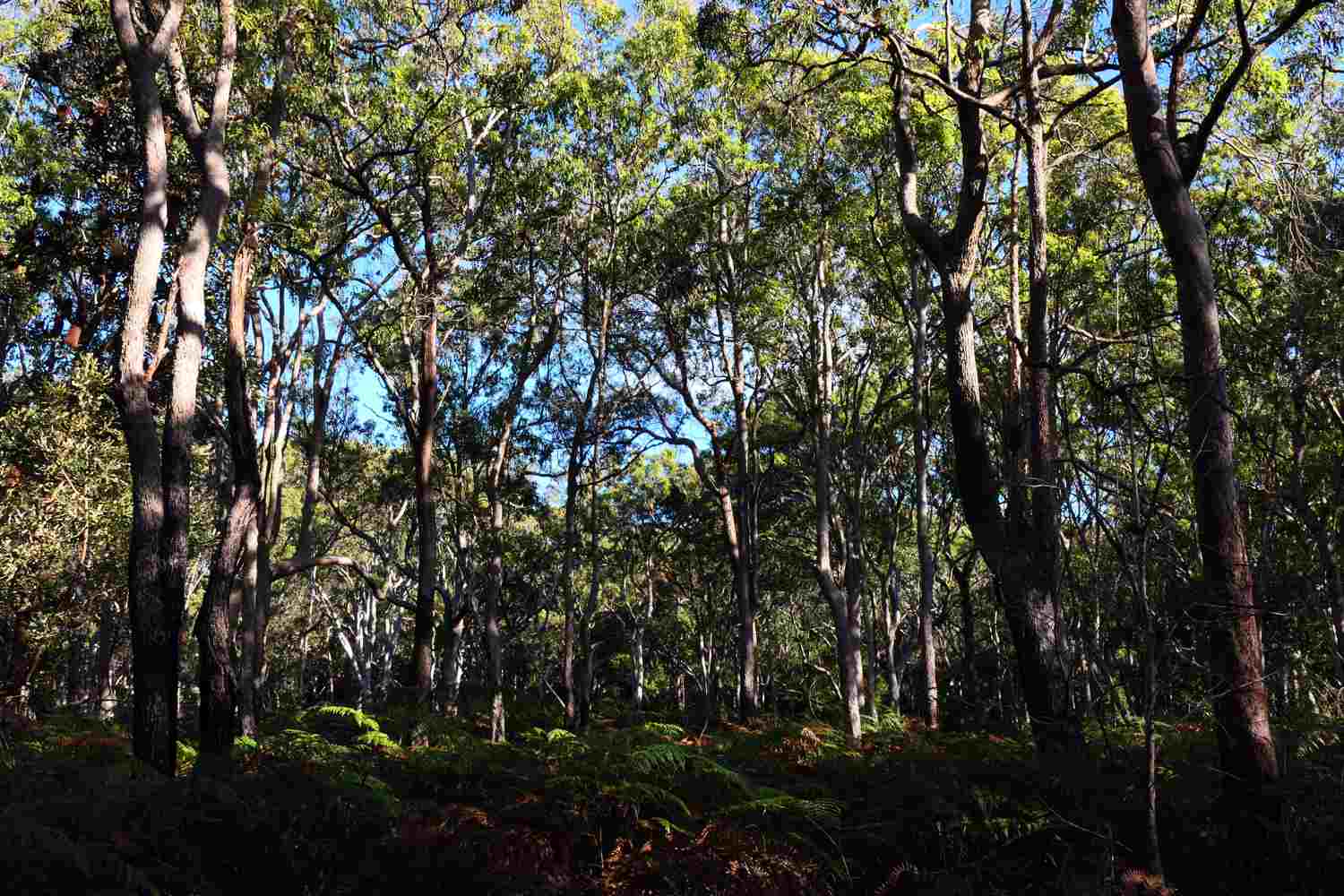 Our garden backs into our forest, public land, a Nature Reserve, once a wild place, never a wild place, then logged, then found inside a farm with wandering cattle, now protected but still Gumbaynggirr. I can taste a hint of trespass. 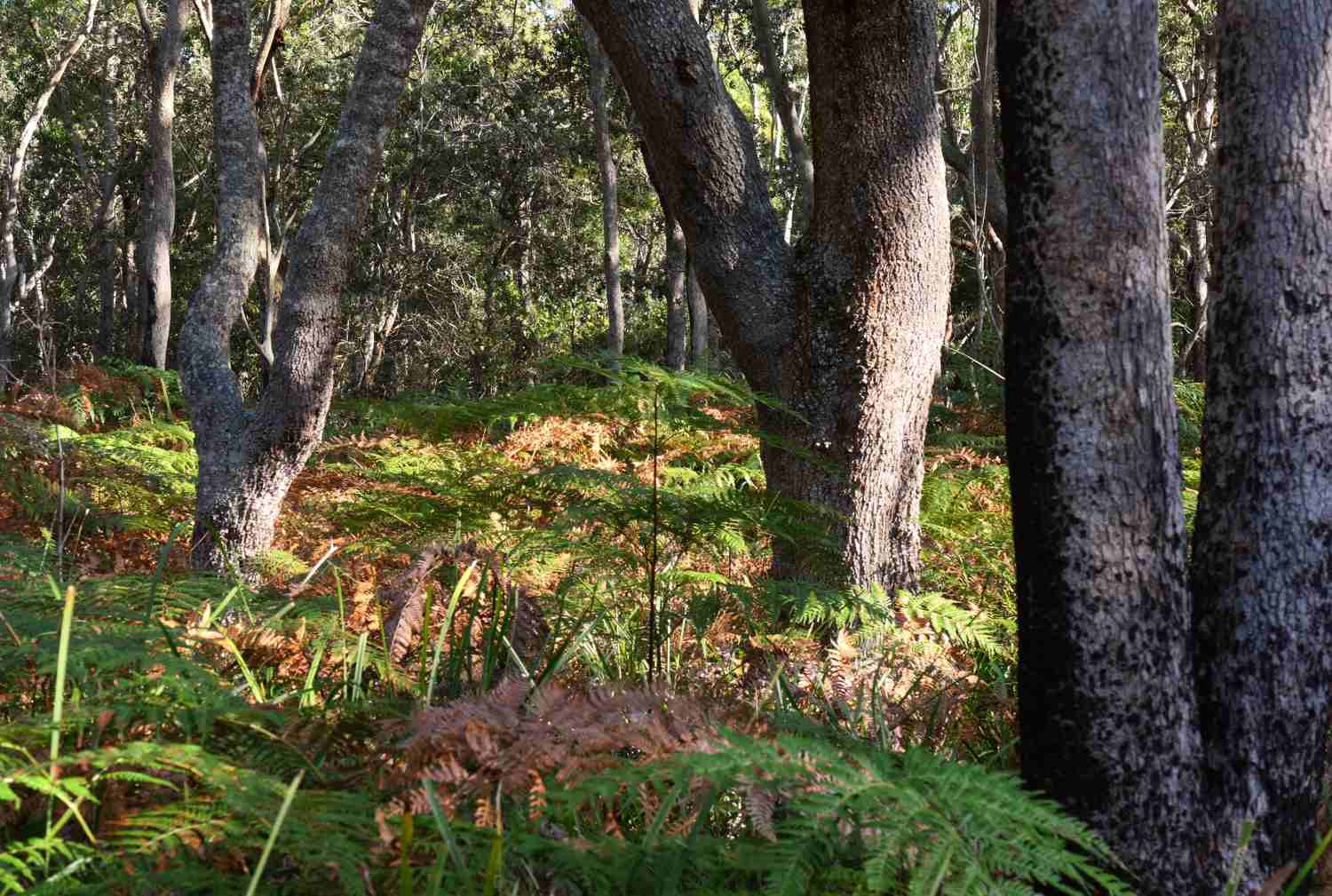 On the tannoy, uncertain for a moment, back to us until the bird turns, reveals a bright bib. There so many nameless parts in this world that it is helpful to append a name when you can – Golden Whistler.

The powerful presence of a bird landing on the track advancing in fluttering skips, looking at us standing his ground as if to say you shall not pass, then flying into the trees packed with so many possibilities.

I doubt that bird knew what indecision is. I am looking for the biggest Pink Bloodwood, but they are further into the forest and nothing like the 500 year old man we saw yesterday by Coffs Creek, thick with Gumbaynggirr history and knowledge. 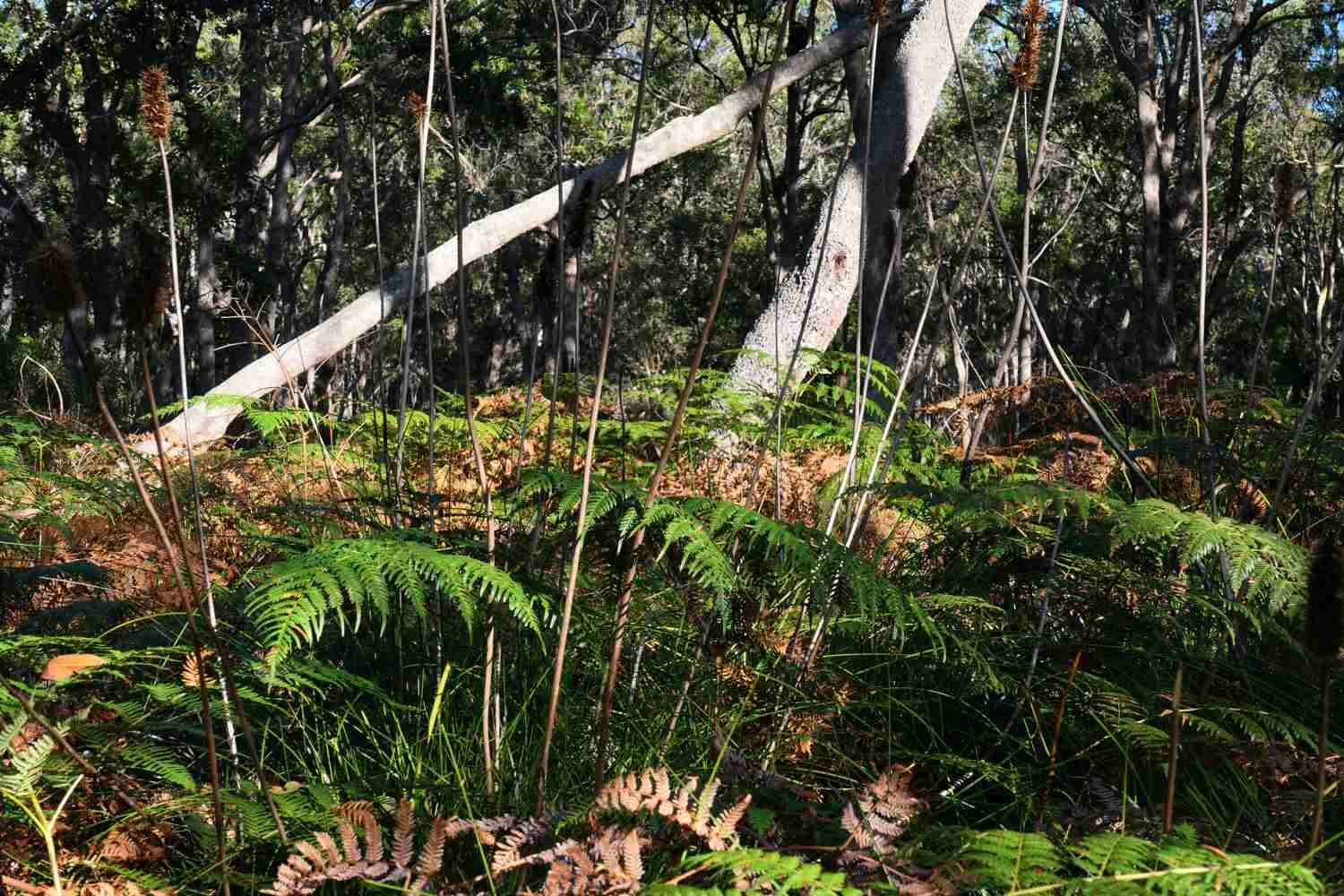 An email to my travel agent, a Trump fan:

It’s true that black unemployment did reach a record low during the Trump administration: 5.9 percent in May 2018. But it had been falling before. The much more dramatic drop in black unemployment came under Obama, when it fell from 16.8 percent in March 2010 to 7.8 percent in January 2017. Trump is a dick as you say and dangerous for the environment and danger to the world, going isolationist and so self righteous. ‘We did the right thing. Everything we did was right.’ He is unbelievable, always blaming anybody else, especially his own staff he fires regularly.

Re: Kayleigh McEnany’s put down of the media. I looked at the YouTube you mentioned.  After Trump claimed that the media ignored the virus, CNN published a summary of its coverage, from early January:
Coronavirus will test the Trump administration’s ability to handle a crisis;
Coronavirus live updates;
What will it take to stop the Wuhan coronavirus from spreading around the world?

Re: ‘Does The Washington Post want to take back that they told Americans to get a grip, the flu is bigger than the coronavirus?’ Except this story was from Feb. 1, and the flu was indeed a much bigger problem in the United States at that point. AND McEnany also omitted two very important words from the end of the headline: ‘for now.’

The way that the virus was handled by media outlets already has been the source of some consternation, but it seems to err on the side of an over reliance on experts, including those from the Trump administration. In a piece for Vox’s Recode last month, Peter Kafka wrote, ‘If you read the stories from that period, not just the headlines, you’ll find that most of the information holding the pieces together comes from authoritative sources you’d want reporters to turn to: experts at institutions like the World Health Organization, the CDC, and academics with real domain knowledge.

The problem, in many cases, was that that information was wrong, or at least incomplete. Which raises the hard question for journalists scrutinizing our performance in recent months: How do we cover a story where neither we nor the experts we turn to know what isn’t yet known?’ [3]

Wyn and I are extremely lucky, we have not lost our jobs, have passed that phase of life (though as artists and writers we work hard everyday). I feel for the young who are out of work, who have no skills that are easily transferable or usable. At least people don’t starve to death in this country, and the young should realise that being famous or rich or wearing the latest fashion is not the way to live a long and happy life, though the social media put pressure on the young that these are the goals. Education needs to change. I was amazed when teaching 14 year olds in a poetry workshop last year that the word poem seemed foreign to them. There is going to be mass unemployment, but education and employment must be rethought.

My education at private schools in England was reasonable. I learnt a lot of rugby skills and the achievements of the Empire. Get less than 5 out of ten in a Latin test and you were caned back then. Miss a first fifteen match and you were caned. I would never recommend them.

Medical treatment is mistaken for health care, social work for the improvement of community life, police protection for safety, military poise for national security, the rat race for productive work. Health, learning, dignity, independence, and creative endeavour are defined as little more than the performance of the institutions which claim to serve these ends, and their improvement is made to depend on allocating more resources to the management of hospitals, schools, and other agencies in question. Ivan Illich [4]

I was reading Illich in the seventies at university, I wish I had taken him to heart.

There is a problem with work, ‘third world labour’, automation, and now AI is reducing the number of jobs worldwide. Nearly a year ago Bernard Marr prophesied how work will change:[5]

I think he is correct but more than the future of work as quantity is the question of quality. Thirty years ago Illich wrote about tasks being foisted on consumers reduces their time, the amount of casual social interaction and opportunities for low skilled entry level work. Supermarkets now encourage self service, petrol stations all demand it.[6] Marr was writing for Forbes, and not thinking about the underclass or those failing in the education system.

Where, the evening that the Great Wall of China was finished, did the masons go?
‘Questions From a Worker Who Reads’, Bertolt Brecht, 1935.

John Ruskin on the other hand, a very wealthy Victorian aesthete, became interested in the reform of working conditions. He wrote a series of letters ‘to the workmen and labourers of Great Britain’.[7] His ideal was a cooperative community producing its own food and goods and living, ‘contented lives, in pure air, out of the way of unsightly objects, and emancipated from unnecessary mechanical occupation.’ Nearly fifty years later, the north American John Dewey expressed the hope that children would be educated to enhance their individual qualities in ways that enrich the community. [8] This hasn’t happened as Illich maintained:

Inevitably, this hidden curriculum of schooling adds prejudice and guilt to the discrimination which a society practices against some of its members and compounds the privilege of others with a new title to condescend to the majority. Just as inevitably, this hidden curriculum serves as a ritual of initiation into a growth-oriented consumer society for rich and poor alike. [9]

Neil Postman argues that education (in the USA, but applying to most rich countries) is focused on economics, consumerism and technology. He wants stories that all pupils, teachers and the curriculum share to offer a rationale for education.

He suggests alternative narratives:
“Spaceship Earth” (the notion of humans as stewards of the planet); “The Fallen Angel” (a view of history and the advancement of knowledge as a series of errors and corrections); “The American Experiment” (the story of America as a great experiment and as a center of continuous argument); “The Laws of Diversity” (the view that difference contributes to increased vitality and excellence, and, ultimately, to a sense of unity); and “The Word Weavers/The World Makers” (the understanding that the world is created through language — through definitions, questions, and metaphors). [10]

Illich thought the modern school was busy creating and defining the needs it purported to satisfy:
The transformation of learning into education paralyses man’s poetic ability, his power to endow the world with his personal meaning. Man will wither away just as much if he is deprived of nature, of his own work, or of his deep need to learn what he wants and not what others have planned that he should learn. The overdetermination of the physical environment renders it hostile. [11]

Paul Thomas a teacher and professor of education insists that education is a ‘human experience’, and that ‘Technology is a distraction when we need literacy, numeracy and critical thinking.’ [12]

Illich attacked technology, ‘the idolatry of science’ and power of the professionalisation of knowledge. This issue has come to the fore tight now with the use of science to shape governments’ reactions to the pandemic. And there are renewed attempts, using the pandemic as an excuse, to argue that the function of education is to meet the demands of manufacturing and the economy in the years ahead.

[1] This was our nearest river when we lived in Sydney and one we would visit regularly. ‘Each year the ocean is inundated with 4.8 to 12.7 million tonnes of plastic washed in from land. A big proportion of this plastic is between 0.001 to 5 millimetres, and called “microplastic”.’ James Hitchcock, ‘After a storm, microplastics in Sydney’s Cooks River increased 40 fold’, The Conversation. May 29, 2020

[2] Richard Santos, ‘Dylan’s Apocalyptic Visions’, Crime Reads, May 29, 2020. ‘Dylan released three religious albums and went on multiple world tours where he harangued the audience and told them they were all going to hell if they didn’t repent. His apocalyptic warnings turned into ravings, and if the times were changing, this is not how the crowds thought they would go.’

[12] Quoted by Francesca Duffy, The Waldorf Method: Passing on Technology in the Classroom, Teaching Now, 25 October, 2011.