If I could write a poem about the English, I would start here

on the South coast where my childhood ran with a guaranteed

and women sucking on ice creams slipping down their cones,

plastic buckets with ‘crab bucket’ written on them, lines hanging

the kids’ patience, what are you meant to do on holidays? 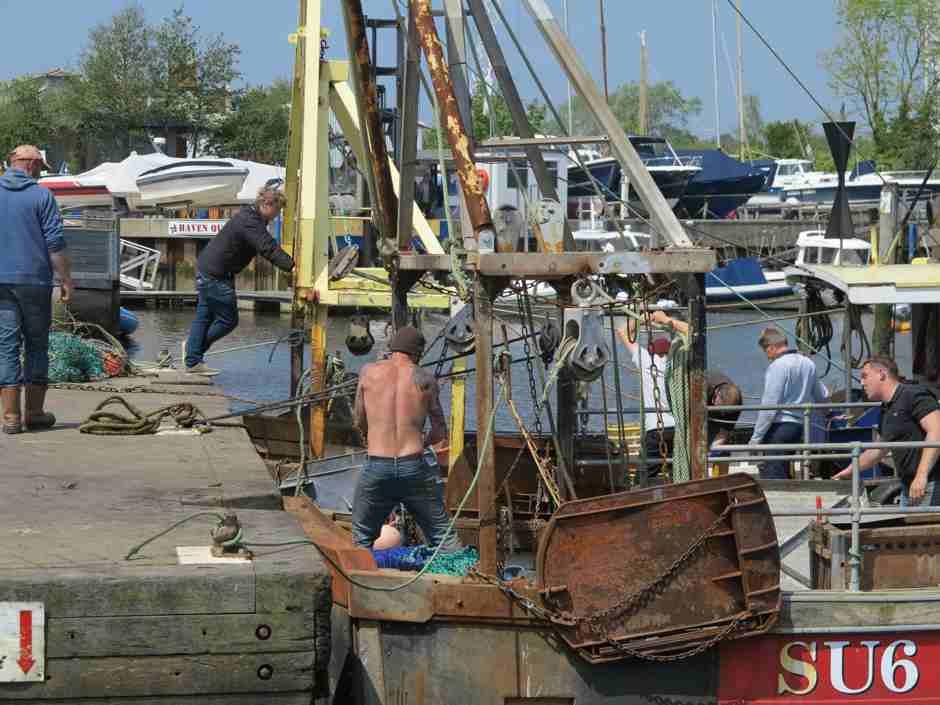 Fishermen working the boats exchange injuries to the Queen’s English

and Puffin Cruises offer discoveries on an old lifeboat from the Canberra.

Postcards are infused with colour from when summer was summer,

they guard doorways leading to pasties and Made in China tat.

I don’t understand souvenirs, how do they represent fun? 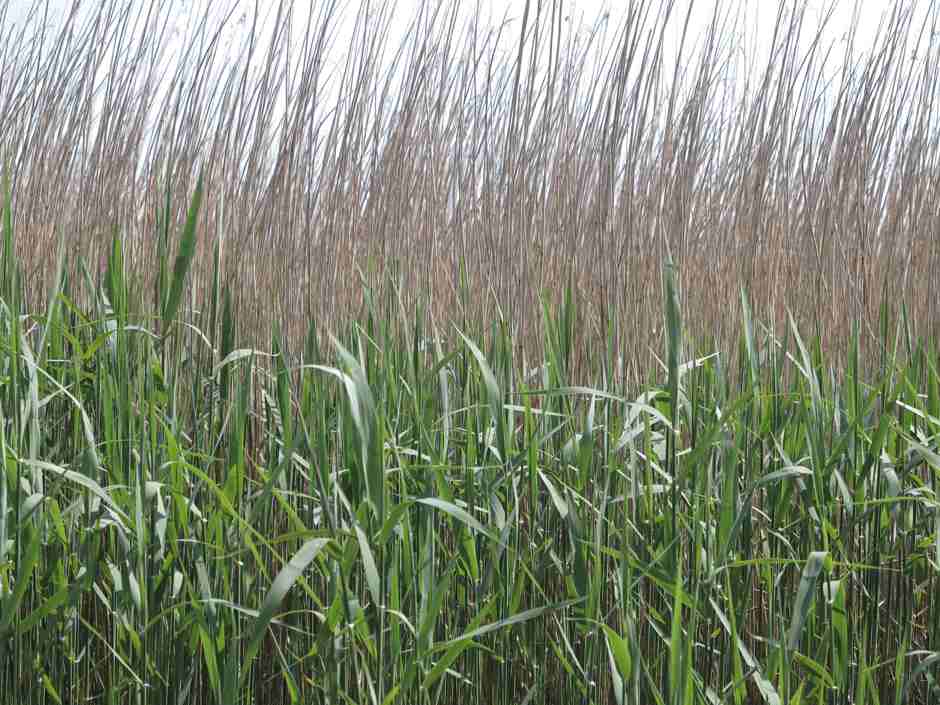 the rounded Art Nouveau battlements gleaming in the first sunshine

in weeks. In the foreground, a heron, head upside down

between its legs, unfurls its wings in homage to the sun

that lift, dance ahead and settle, only to be unnerved again.

Kids surround the lock with excitement, the thrill of the hunt for tiddlers,

tossing seaweed by-catch. We walk up and over the shingle bank

a pale sea is lapping white cliffs and the bleached Needles, almost shiny,

– not one black face has appeared all afternoon.

Walking the path to Silbury Hill, expecting a climb, not a wired off

monument, the largest monument in Europe, the most expensive.

Over four thousand years of wear and tear repaired with chalk infill,

management squirrels away touch, a canopy of care for further

incarnations, sites churches fixed to, so in the meantime

photographs make do with replicas of distance and symmetry. 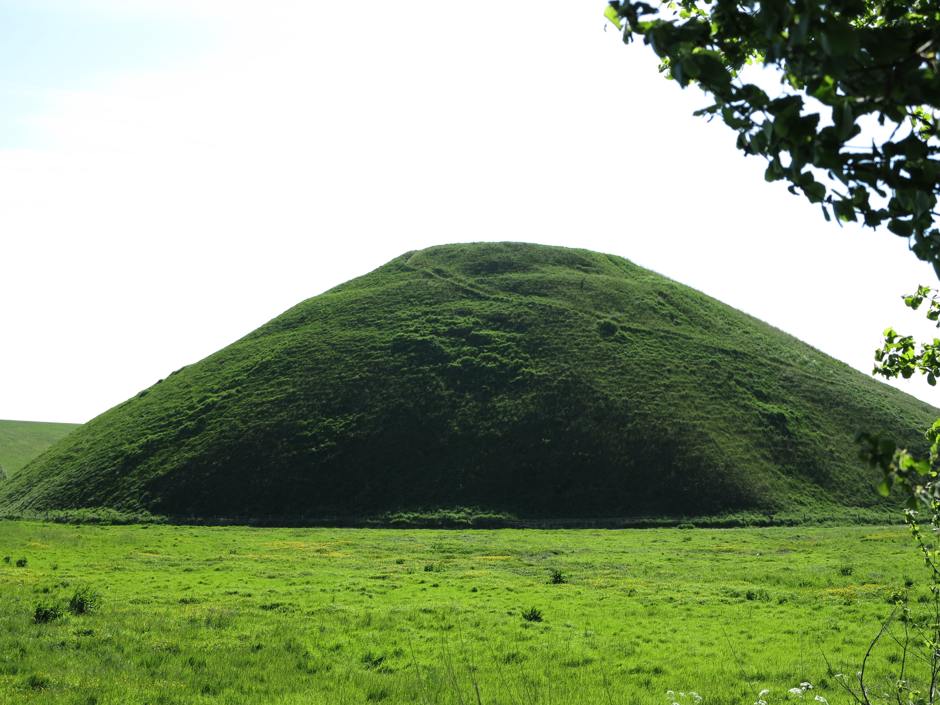 Cresting the long hill opposite is West Kennett Long Barrow,

a Yellow Wagtail rules the tomb’s roof and a raptor

fingers the gyre. Wyn with the glasses says it’s a Black Kite,

I’m skeptical but we know the Reds so well from Chiltern valleys. 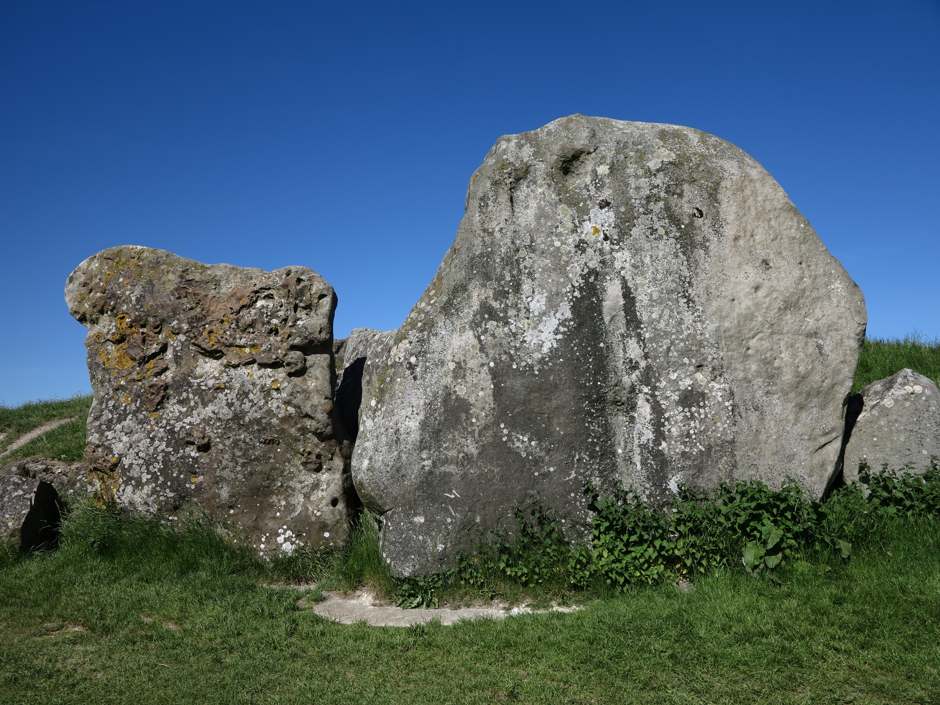 You enter through giant entry stones, in over a thousand years

less than fifty burials found, incomplete, the elite get rearranged.

On the wall of the end chamber offerings have been renewed,

Bluebells and Buttercups. We seek alignment to the past for a future

while almonds and raisons and half a biscuit litter the floor.

As I leave two swallows abort their entry and then we see it,

the nest at arm’s reach height, in the first chamber on the left.

Young lambs shelter in the lea of Avebury’s giant stones

providing perspective on might and innocence and the cold wind

blowing in from the dark end of the cosmos, Murillo and the afterlife. 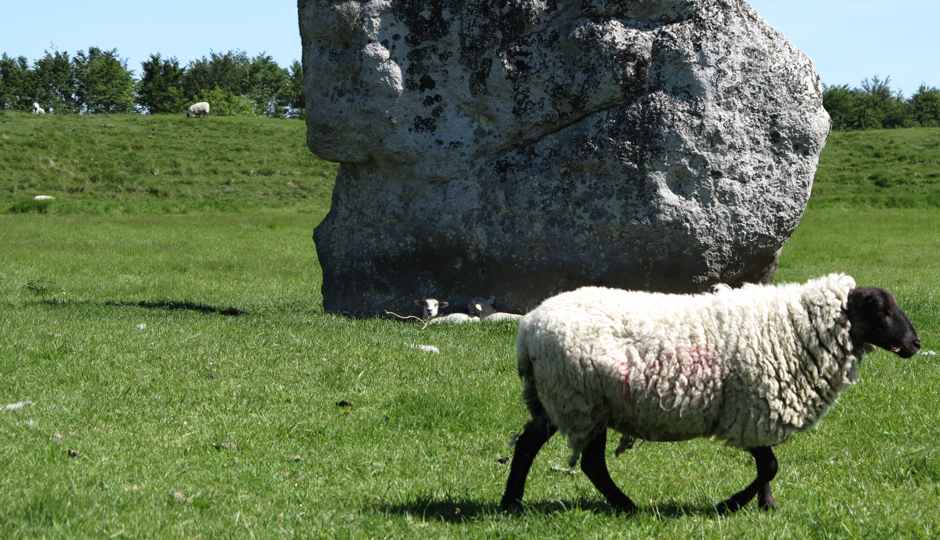 The stones rampage through the heart of the village

and photographers emerge, one old gentleman asks his wife

to pose as if pushing one over, a middle aged man

packing all the gear lines up his shots like a sniper.

It’s generally accepted that you get what you pay for. 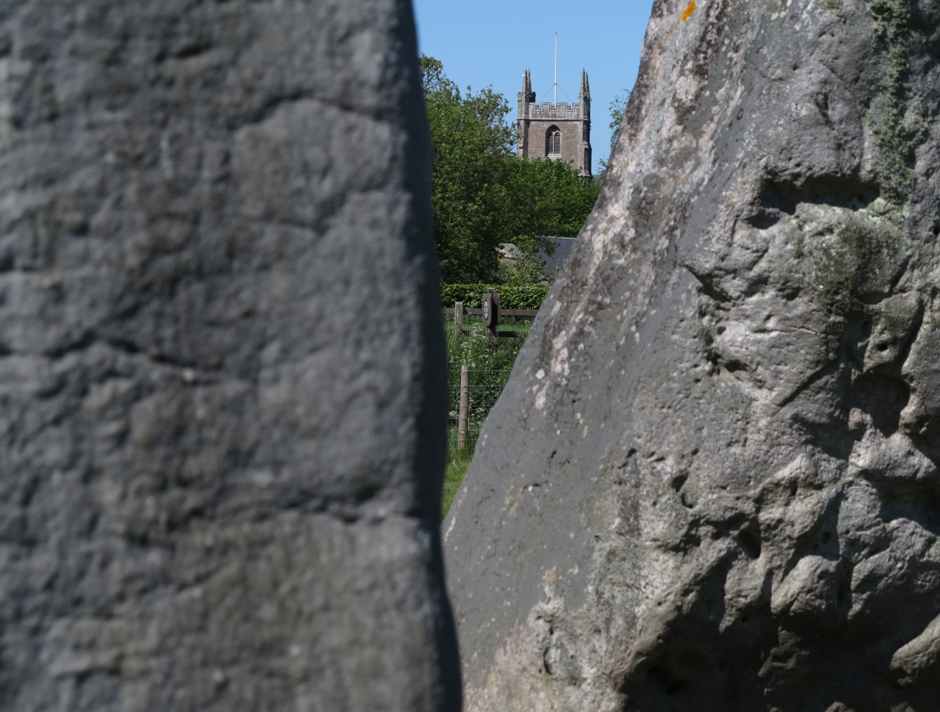 against, touch the closest to magic. Knives that sliced strips

of sacrifice have gone to ground, thoughts lashed to mechanicals

are now satnavs and contraptions that amass the digital archive. 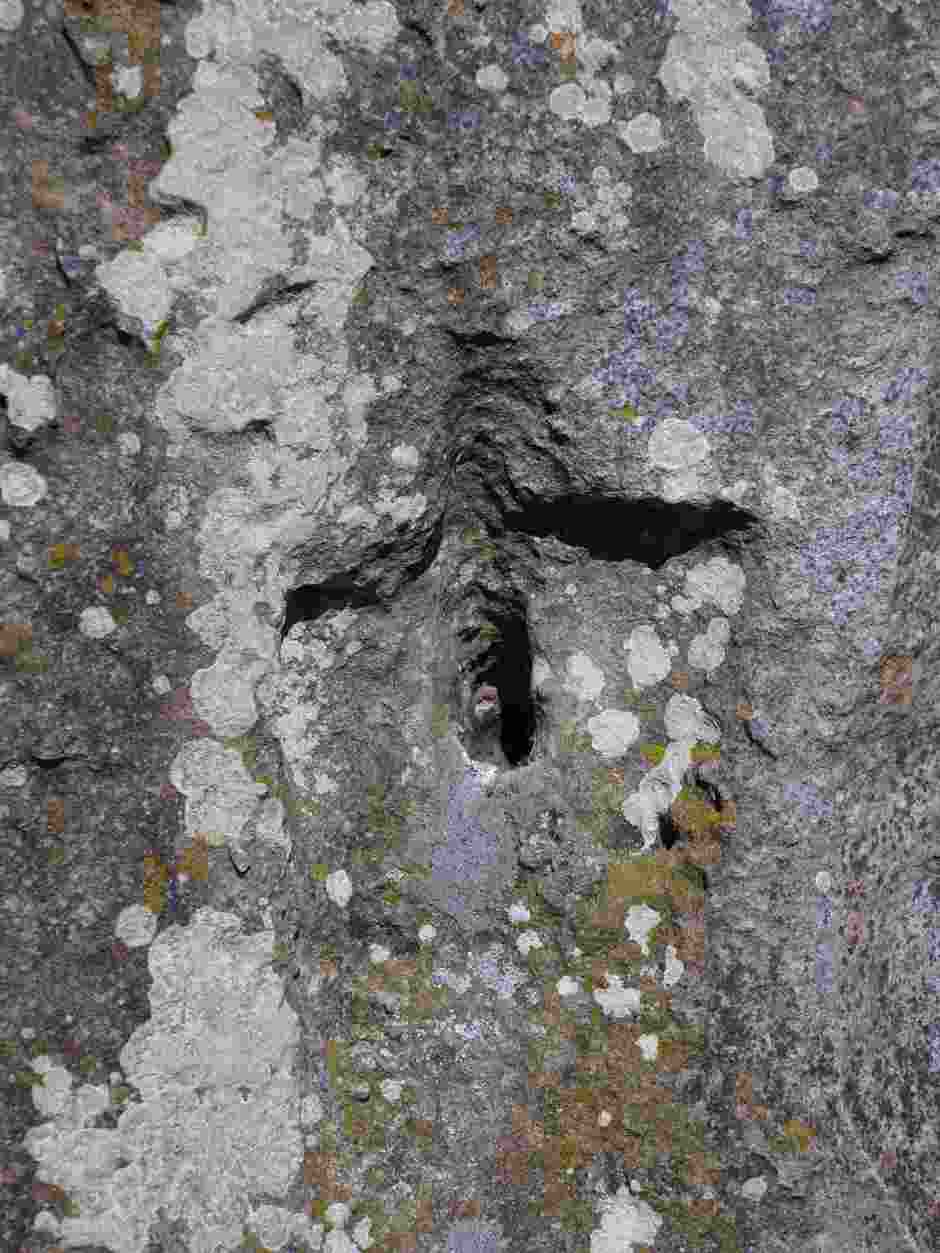 A skylark rises vertically in front of me lifting song high

into the sky above White Horse Hill, voice in spate pouring

onto crows, onto small blue butterflies and into the earth,

and it’s been a terrible couple of years for life. 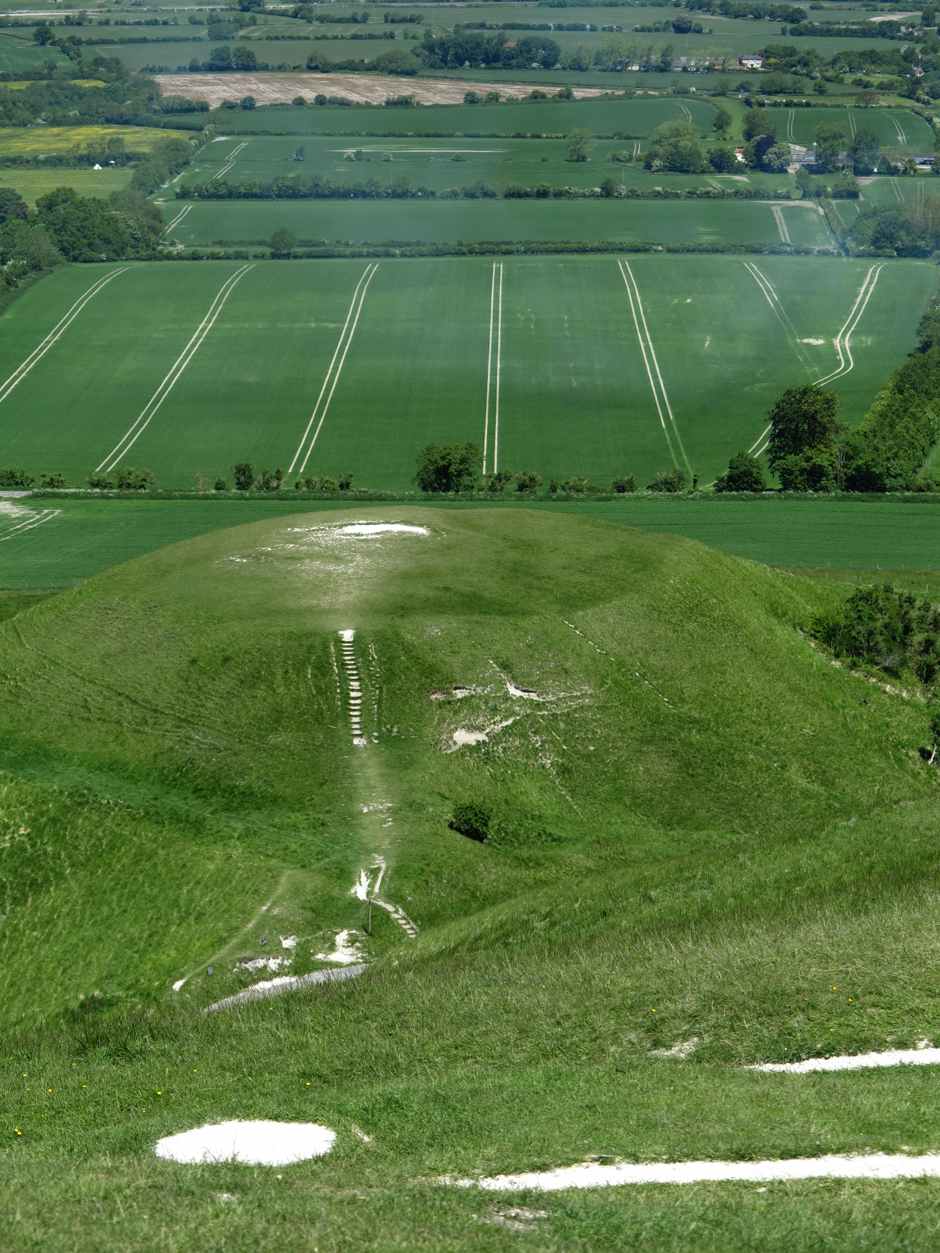 Two men lye on the grass filming themselves messing with

some gadget aimed at RAF Brize Norton, or the five wind-turbines

churning the air – or the valley’s vast agricultural geometry.

I ask what they are doing (a poet is naturally curious),

they were field testing the latest gizmo in surveying 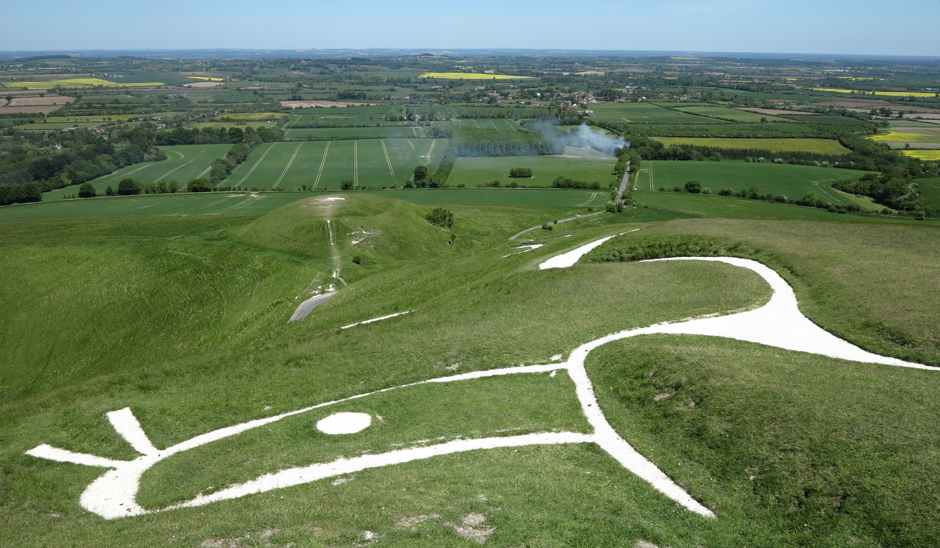 The beautiful flowing horse is only visible from the air,

or see what you can see, the eye, the abstract legs running.

The sculpture is probably an ancient machine for worship,

or a sozzled tribal celebration, in some sense an awesome figure

sculpted by simple tools, antlers tearing away the turf

to reveal the past’s bone-dust-chalk racing away.

King Alfred’s birthplace where I was taught history began. 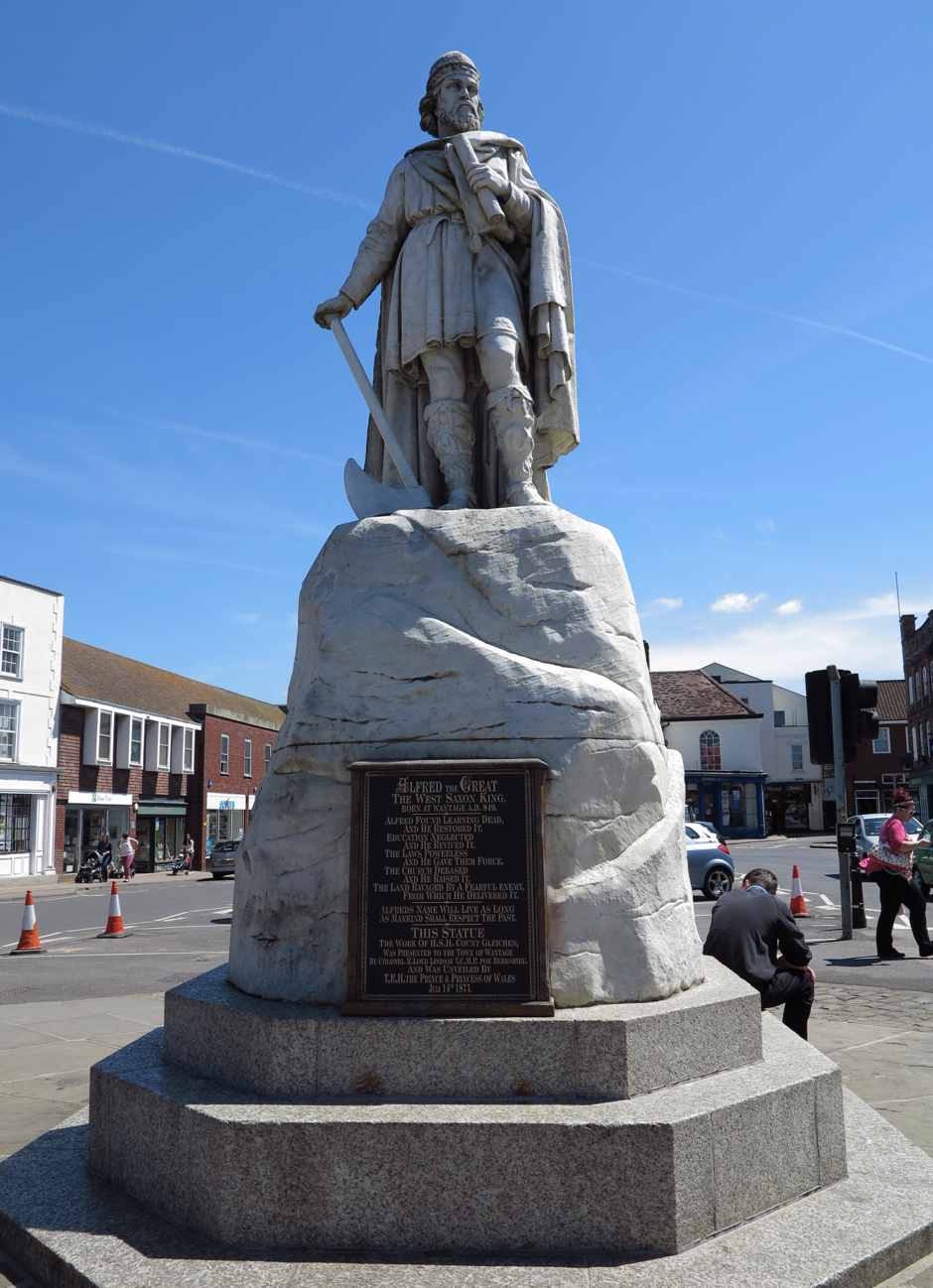