Jerome looks ready for an afternoon nap in a small claustrophobic room, almost, and his pet lion by his feet looks like a stuffed toy. Objects clutter his shelves, along with his books, an hourglass and astrolabe, and a pomegranate (a symbol of the resurrection apparently). Jerome spent time in the desert and so there’s a jar labeled ‘tyriaca’ (an antidote for snakebite)

I have never been to Detroit, never seen its ruin porn or Jan van Eyck’s ‘St Jerome’ (1435, Detroit Institute of Arts). In reproduction, the awkward work never looked like a Van Eyck to me, and is now attributed to his workshop. The saint is dressed in Cardinal red, though he died in Bethlehem in 420 CE, long before the invention of cardinal. A church edict in 1295 dressed Cardinals in red, but one closer in color to the purple of the Byzantine Emperors, the dye coming from murex, a mollusk. After the fall of Constantinople 150 years later, murex was unavailable, and Cardinals wore scarlet made from the scale insect Kermes.

I am fascinated by Antonello da Messina’s ‘St Jerome in His Study’ (oil on a limewood panel, 1475), now in the National Gallery, London. I have looked at this work many times and was looking forward to renewing my acquaintance with the work last November but I never managed to reach London.

St Jerome is depicted in Cardinal’s regalia studying a text in his carrel (a wooden study) raised above the tiled floor of strangely patterned green and white majolica tiles, finessed with geometric perspective. The wooden structure looks just plonked beneath the high vaulted stone of some great church. His backless black shoes lie at the bottom of the three steps. A ghostly lion stalks the colonnade, a beautiful structure of rib-like vaulting.

Jerome spent some years in the Syrian desert as an ascetic penitent, then joined the Church hierarchy and spent the rest of his life translating the Bible into Latin. The Old Testament was written in Hebrew, the New Testament originally in Koine Greek (the Greek of the Roman and Byzantine empires) with some Aramaic. Jerome combines an intimacy with nature with an intimacy with texts. In this painting he is concentrating on a text, ignoring the birds and the beautiful landscape. The light comes mostly from the left of us, the viewer, casting the lion in shadow. 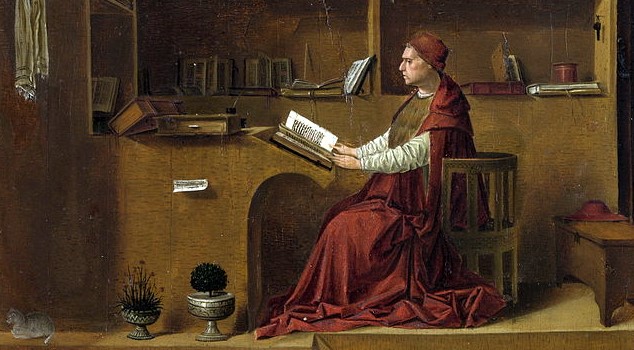 The work is eccentric in that an architectural frame of heavy stone, acts as a proscenium arch. Jerome is set back. A partridge, Peacock and metal bowl decorate the threshold. His study is gloomy, his concentration intense, his posture solemn, the desert far behind him. The shelves in front of him give a slightly skewed perspective. The shelves beside him are full of Venetian ceramics and books, most of them wide open, as if an invitation to decipher the indecipherable marks. Even the top of the wooden structure collects forgotten books, papers and objects. A comfortable cat with a strange stick tail sits to the left of plants in small ceramic pots. Who watered them? Jerome looks much too serious and busy.

Through the top windows, swallows are hunting in the evening sky. The left-hand window reveals people (and sheep) going about their lives on foot, horseback and in a boat along a canal or straight stretch of river. The right-hand window shares a view of pasture and cleared hills, with what looks like erosion. No sign of movement. The distant landscapes have that Flemish style of accuracy.

Antonello quickly adopted the Flemish technique of painting with oil glazes, thin translucent layers carefully forming detailed luminosities and textures of metal, fabrics, glass. He was one of the first Italians to use oils, but little is known about him. He came from Sicily and returned to Sicily. Vasari claims Antonello saw a Van Eyck altarpiece in Milan around 1450 then traveled to Brugge to learn this new Flemish technique. We are not certain that he did, he may have had a northern teacher, and possibly travelled north (between 1465 and 71 when his whereabouts are unknown). But he would have seen Flemish oil works in Naples where he trained in 1450.[i] We know he visited Venice in 1475–6 where this work was painted, and may well have influenced Giovanni Bellini and others.

Vasari claims that the van Eyck brothers (Jan and Hubert) invented oil painting, probably too simplistic though.[ii] Only around two dozen Netherlandish pre-Eyckian panel paintings (made before 1430) survive. We have no idea who taught the van Eycks, possibly Robert Campin, but his work is so different. Jan Van Eyck’s paintings that stunned the courts of Florence, Naples and Gonzaga are lost, every single one of them. Some were famous and influenced Italian artists, like ‘St Jerome in his Study’, owned by the King of Naples. ‘Jerome [is] like a living being in his library’, commented his contemporary, the Italian humanist Bartolommeo Fazio. Of another lost work, he wrote that van Eyck’s Angel Gabriel has ‘hair surpassing reality’ and the donor lacking ‘only a voice’.

Antonello mainly painted male portraits and the crucifixion. ‘Portrait of a Man’ was painted at around the same time as St Jerome, some think it is a self-portrait, it is a 3/4 bust set against a dark background in the Flemish style, direct and honest. The man looks directly back at the viewer. Jerome was painted just a year or so before Hugo van der Goes started on his massive Portinari Altarpiece which was painted in Brugge, commissioned by an agent of the Medici bank in the city, and completed in 1479. The masterpiece stirred great interest when it finally arrived in Florence in 1483 about 8 years after Antonello’s magical oil painting of St Jerome.[iii] It now lives in the Uffizi Gallery, Florence, and I have only seen it once (but not forgotten). The work was a key element in the development of oil painting in Italy. Its scale (253 x 304 cm), realism, dazzling colours and textures of fur, silk, hair impressed everyone.

Virtuosic details in the central panel, the Nativity scene, depict flowers in two vases, one Spanish with irises and a scarlet lily, one glass with carnations and columbines, in front of a sheaf of wheat at the feet of the Virgin. The arrangement of fruits, flowers and plants manufactures a still life, long before the genre was invented. And everything performed a symbolic function. 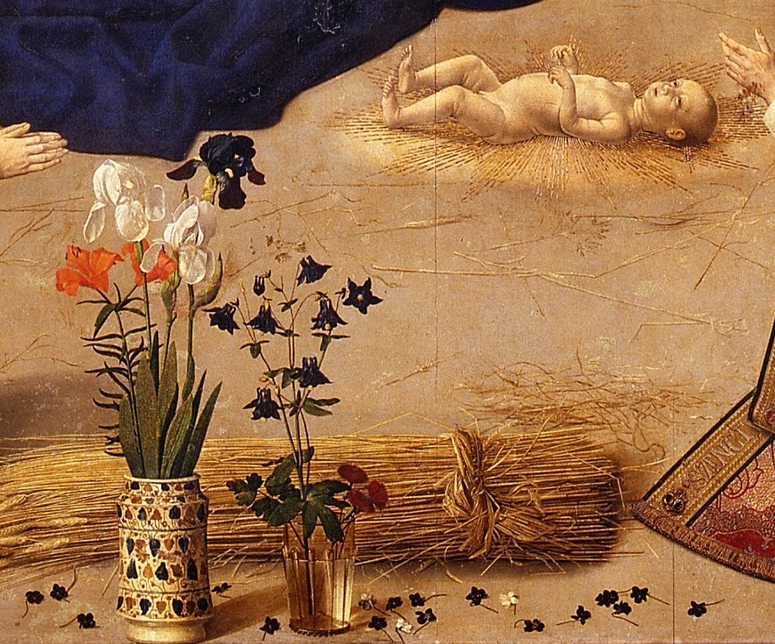 Hugo Van Der Goes had a crisis of faith and abandoned his workshop, joining the Devotio Moderna, who agitated for religious reform and a turn to piety, humility, obedience and a simple life.  He suffered from depression and while he lived in this community, he still painted but still struggled with his mental health. He made an unsuccessful suicide attempt, never recovered fully died within the year, in 1482.

St. Jerome and the Lion is a slightly earlier oil painting by Rogier van der Weyden, or his studio (c1460) showing Jerome and his lion in a rocky environment. This painting is also in Detroit. The story goes, a lion limped towards him during a lecture, his students fled, but Jerome calmly removed a thorn from the lion’s foot and they became companions (or rather, the lion became his servant). The work is not nearly as refined as Antonello’s, the lion looks like a grumpy pantomime prop.

When I was young I loved animals and placed in a monastic boarding school with church ritual and texts I was intrigued by St Francis, a soldier who also loved animals. He dreamt God was talking to him and returned home to Assisi to tend to the sick, leading a life of poverty and simplicity. He founded orders to promulgate this ideal. He wrote the Canticle of the Sun, probably the first works of literature written in the Italian (Umbrian) language: ‘Praised be You, my Lord, through Sister Mother Earth, who sustains us and governs us and who produces varied fruits with coloured flowers and herbs.’ [iv]

I now mistrust animal companions, those who seek intimacy with an animal are usually escaping human companionship.[v] I also dislike the idea of owning animals, though as a child I kept newts and terrapins. Pets are an unsustainable and selfish practice.

I also mistrust fine art. Owning art is also a problematic when art becomes entangled with the market and investment. 50 years after Messina’s ‘St Jerome in His Study’ it was painted, a silk merchant owned it. The banker Thomas Baring bought it at auction in 1854, then it was ascribed to Van Eyck (some scholars has suggested Memling or Durer).

I also mistrust a neat study, as mine is chaos, with a view of a forest, a chaos of entwined limbs.

[ii] Jan van Eyck was a genius though, a painter of varied modes, from illuminating a Book of Hours for Jean, Duc de Berry large scale altarpieces and intimate portraits. He also found time to be a courtier, alchemist and spy. Charles Darwent, ‘The Road to Van Eyck, Museum Boijmans Van Beuningen, Rotterdam’, The Independent, 27 Oct, 2012.

[iii] This triptych transported by boat to Sicily, then by barge to Porta San Frediano in Florence. It finally arrived a year after Hugo Van Der Goes’ death.