An exhibition of poetry, photography and video, with a 13 page essai, a book and interactive poetry exercises, July/August 2017.

With huge thanks to John Laidler, video wrangler and Ray Meyer collage wrangler. The video is available here.

The idea of this exhibition is not a display of poetry and photography, but to use them to suggest that viewers might like to experience Eos for themselves. To quote Bruce Lee from ‘Enter the Dragon’ (and the Shurangama Sutra): ‘It is like a finger, pointing a way to the moon . . . Don’t concentrate on the finger, or you will miss all that heavenly glory!’

I  gave a talk on Eos and facilitated a shared discussion of visitor’s experiences of Eos.

The exhibition has questions about our relationship to literature and art and our lives in the world outside this gallery space. Eos refers to being in the presence of a beautiful new day, as light starts to overwhelm the gaps between the stars. Jalingarr  is the Gumbaynggirr for dawn. And here I would like to acknowledge elders, past and present, who have worked to preserve our wonderful environment.

We don’t have a morning equivalent to Twilight, the abbreviation of ‘between light’. Some old Queenslanders call Eos, piccaninny dawn, a terrible term. I just use Eos, a Greek god, sister of the sun god Helios. Every morning, Eos opens the gates of heaven and announces the coming of a new day. 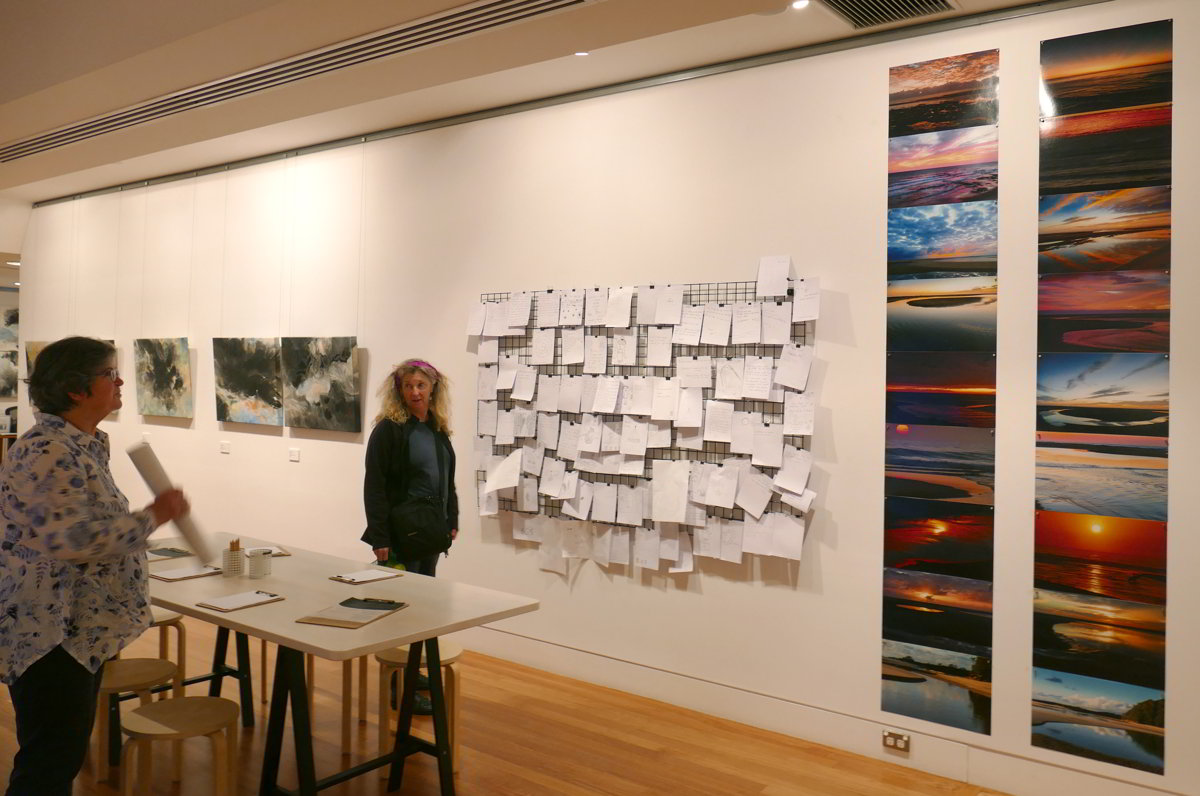 the fish and waterlilies of the Milky Way drown
as searing light scrolls over the ancient continent.
Tide retreating, Miilba Creek pours libation,

bats are put to bed, birds stream through the ballast
of breath. Act 1, Scene 1 is unique each time
before our average star lacerates the lid of the Pacific.

with Jalingarr in Gumbaynggirr being outlawed,
her father banished Auntie Em when he spoke
so she wouldn’t take a beating talking language.

she tells her tale spiced with humour, fits words
that once roamed this coast into new sentences,
losing touch with familial ones once ingrained in country.

endings are common, but our shipwreck is unique.
Heaven is a failed state, welcome dawn’s inspiration,
taste words like ‘work and ‘play’ then name your losses.

Eos is timeout from our lives of consumption. Eos gives some sense of our ancestors’ life before farming, roads, cities, before writing, mechanisation, electrification, algorithms or computers. A century ago stores sold staples in no-name barrels. A century ago, with new products to sell, businesses began spreading a new message – consumption. As Susan Strasser notes, ‘People who never bought cornflakes were taught to need them.’  The Protestant work ethic of saving once the cornerstone of a way of life began to erode.

Cloud dumps on the round moon
extracting the sea’s pearly teeth
before I can locate the tripod.
The rain is not falling now, but

the horizon won’t abandon darkness.
Hearing crystal chimes, I turn around
face the bush, an unseen Sugar Glider
is leaving a trail of raindrops.

I play with exposure but the sea’s dyed
blue rather than the coal-black ink
the Japanese make from pine soot
and deer antlers for the upturned hull.

Charles Kettering of General Motors preached this new message in 1929, ‘The key to economic prosperity is the organised creation of dissatisfaction.’  They brought out a new model every year and soon overtook Ford. Advertising took the bull by the horns. Nearly thirty years later, Vance Packard’s ‘The Hidden Persuaders’ shocked people with the extent to which modern advertising had infiltrated their lives and shaped not only their dreams but also their needs.

Art is a way of using our innate curiosity and creativity to get involved – to pay attention,  ask questions and use our imagination. The problem is, as Elizabeth Kolbert notes in The Sixth Extinction: An Unnatural History: ‘The qualities that made us human to begin with: our restlessness, our creativity, our ability to cooperate to solve problems and complete complicated tasks, are leading us to change the world so rapidly and profoundly that other species can’t keep up.’ 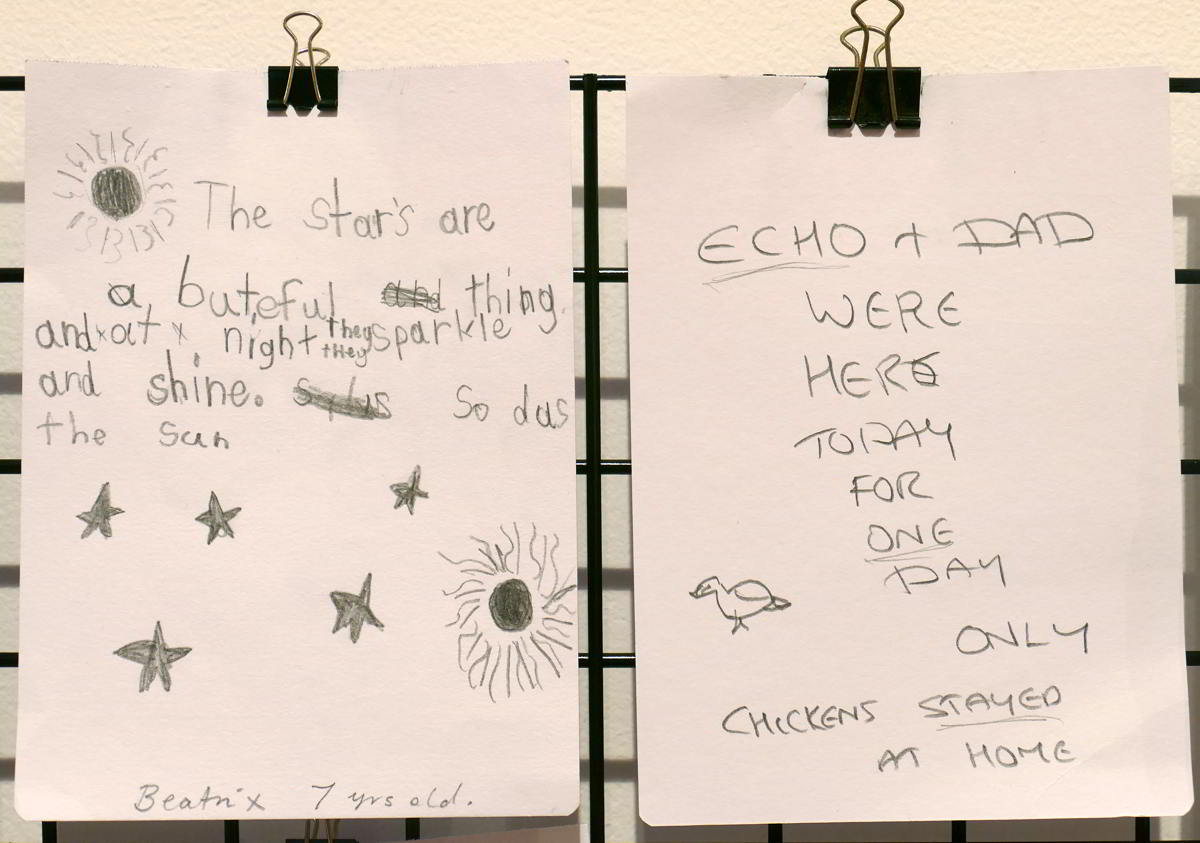 Many children who visited the show said they often saw sunrise. You can too!

In the summer of 2013, Kenneth Wright took eight typical students camping in the Rocky Mountains, typically many went clubbing into the early hours. They used no artificial light and after a week exposed only to natural light the circadian clocks of all eight adjusted to sunrise and sunset. Wright wrote: ‘What we found is that natural light-dark cycles provide a strong signal that reduces the differences that we see among people—night owls and early birds—dramatically.’

We – you – me – everyone – are at a fundamental crossroads. Our way of life for 99% of human existence, that of the hunter–gatherer, has just about finished, and in the last couple of years over 50% of our species now live in cities. Our agrarian revolution has evolved quickly into industrial production, factory farming and multiple technologies that change how we think, feel and behave every moment. These revolutionary changes affect not only us, distancing us from natural processes and environments, but all other life forms that share this planet. They distance us from being present to the world, what is called mindfulness.
Human achievements dominate the world and the manipulation of time and space has been wildly successful, but at a high cost. These changes are destroying natural processes and systems through global warming, loss of biodiversity and habitat and poisoning of land, waterways and seas. They are unhealthy not just for our physical health but wellness, human dissatisfaction is widespread.