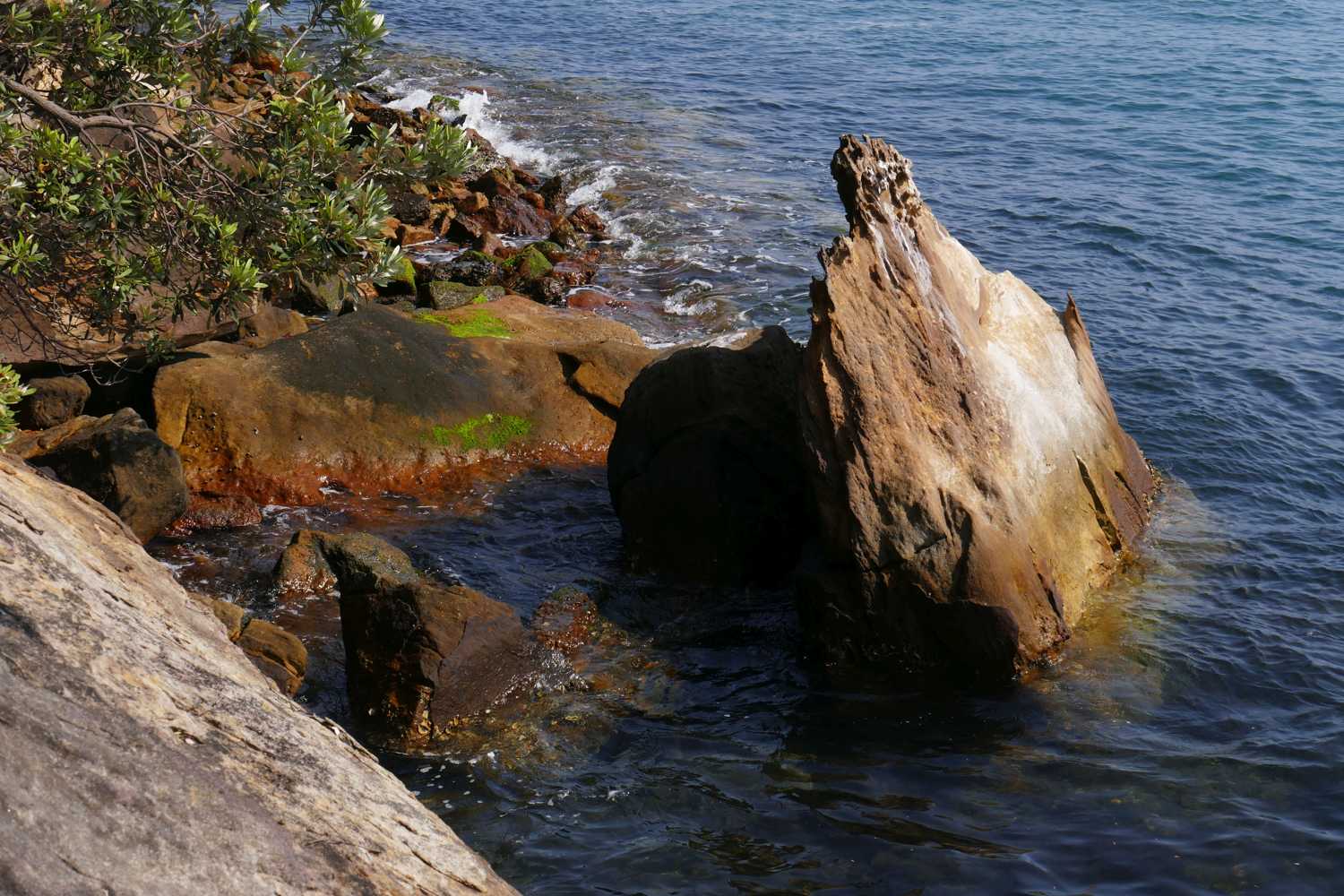 The capsized rock is a stubborn presence with different strengths and weaknesses to you and I. Unconcerned with climate change for one.

No rings of turquoise, gold or lapis lazuli, but a halo of light illuminates a submerged rock supporting a pitted altar, granting status. This is a style of minimalism, Richard Wollheim’s term for art works not obviously art, (i.e. with ‘minimal art content’).[2] Just taking what is around and getting something out of it by returning to the basics of perception and attention. 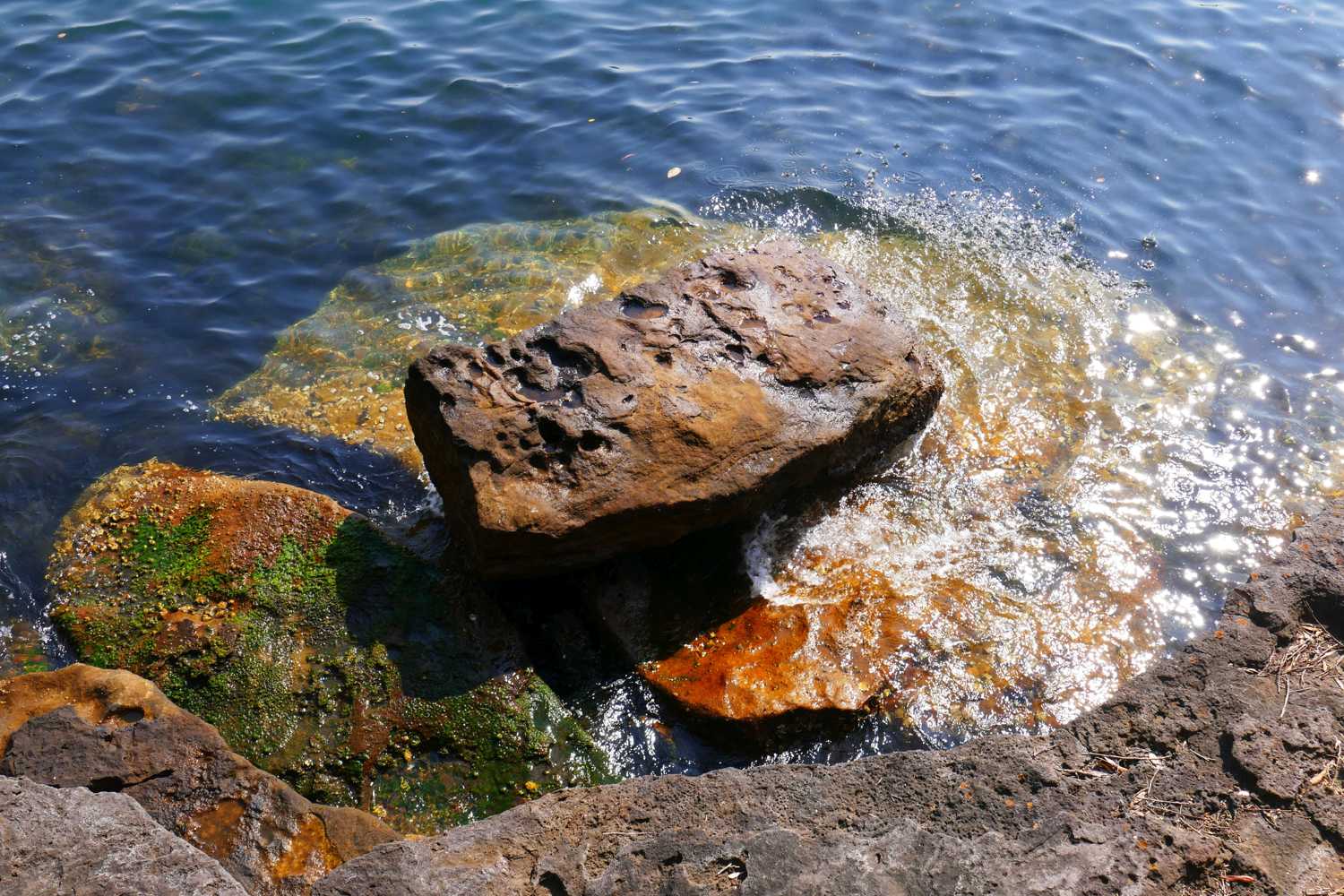 Music chatters from the edge of 5 million energetic humans and so very ravenous. A Long-billed Scrubwren is sighted so you can see what I am hearing – Tom Roberts’ tin whistle skimming across the water. 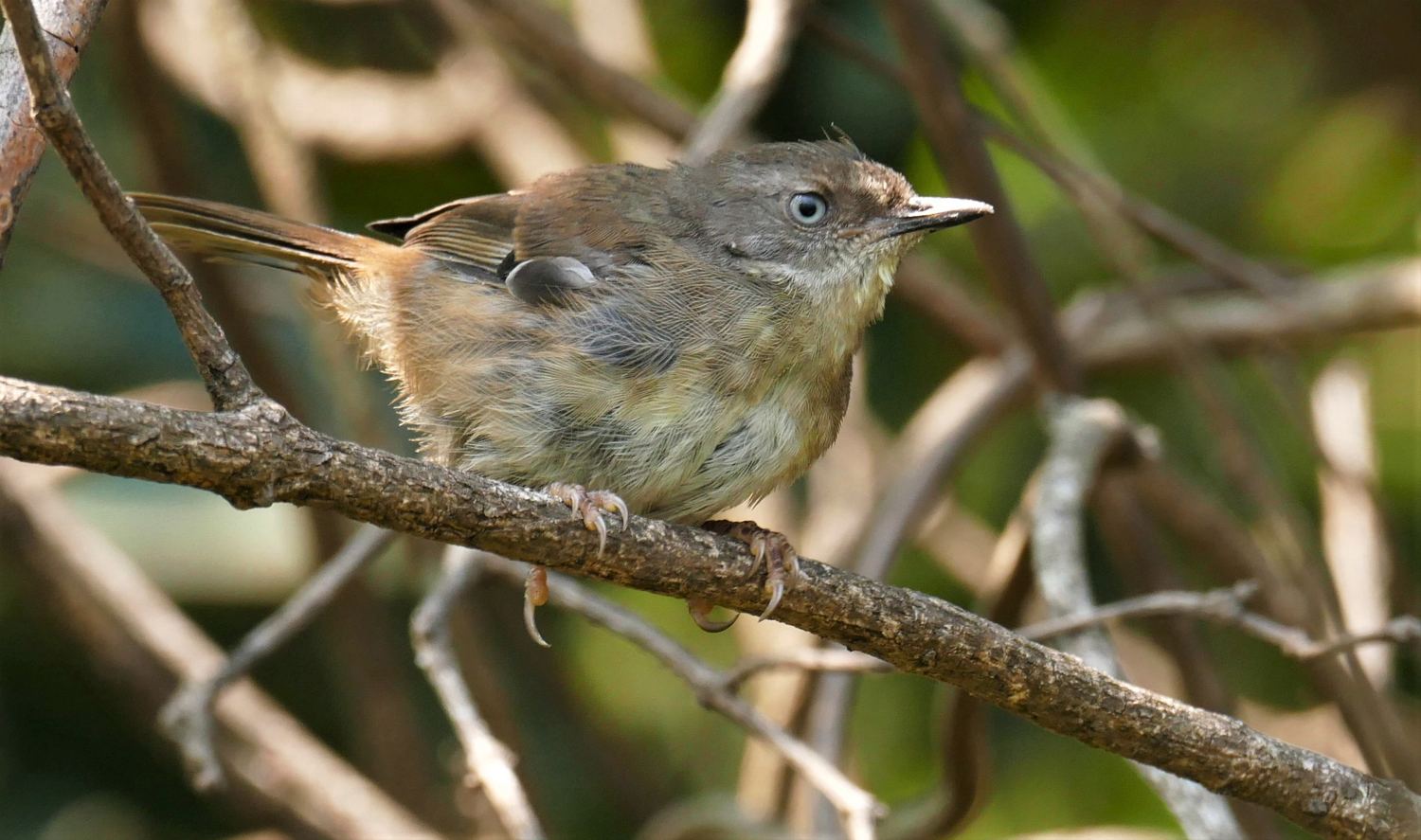 The South African Mickey Mouse plant, (Ochna serrulate, Mexican Devil), hangs like a Christmas decoration. With its yellow petals shed, the sepals have turned red and the drupes hang black. Plenty of weeds play here. Crofton weed (Sticky Snakeroot) is a Mexican daisy initially imported for Australian gardens, but a danger to horses. 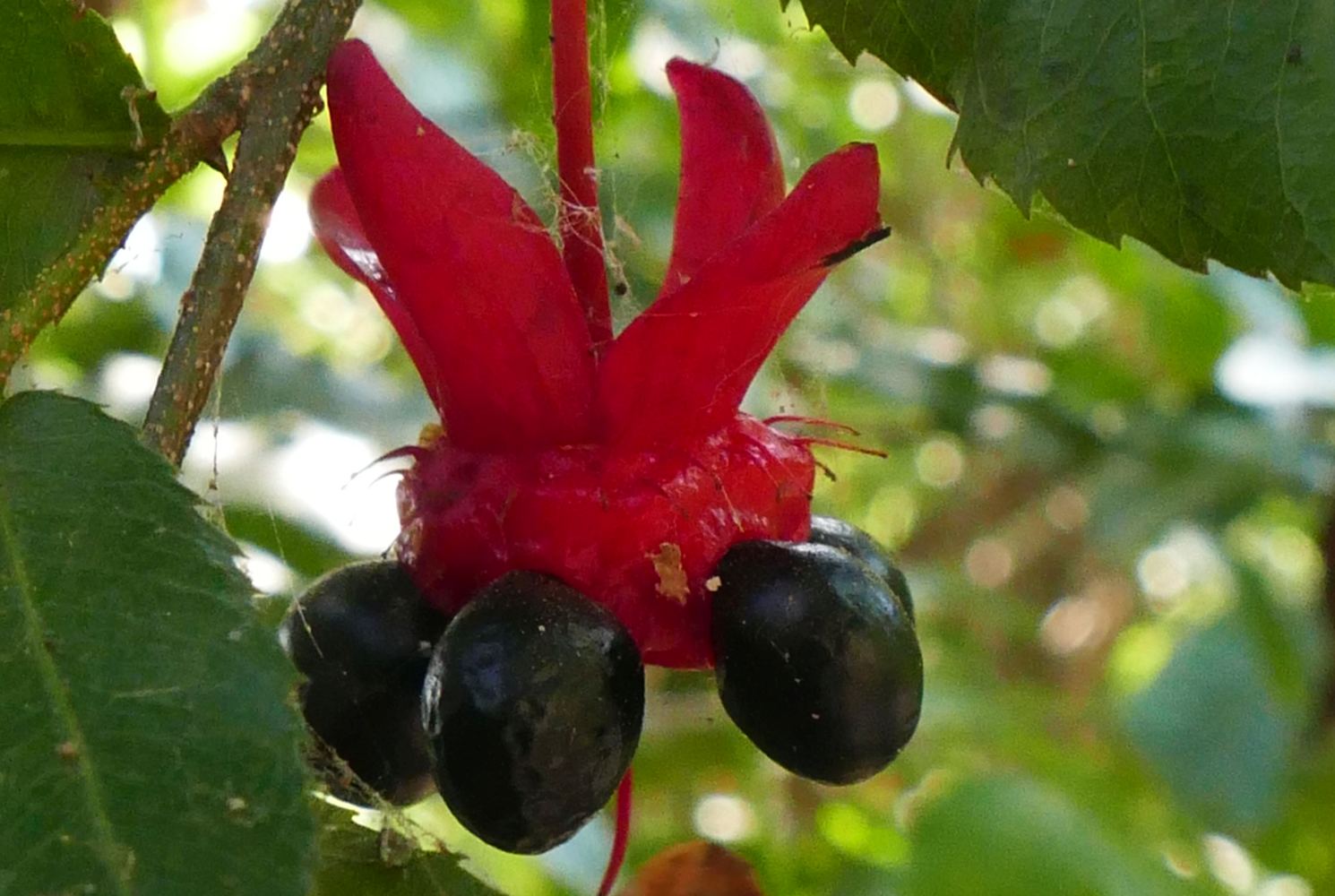 Lantana, a Central and South America beauty, is one of our worst weeds being energetic, as invasive as Europeans, and poisonous to animals and humans.

Morning Glory is a Central American success story, manoeuvres an opening into a beautiful morning. It, ‘can be viewed as a nemesis due to the rapid spread and ability to take over garden areas.’ We were all Gondwana-ones once upon a time. Now, weeds and cola inflict a dangerous homogenisation.

I ask two passing boys for their hopes for the future. Bream or Trevally is their reply. One glances back. Cameras or cameramen out of context of Opera House selfies are stranger strangers. 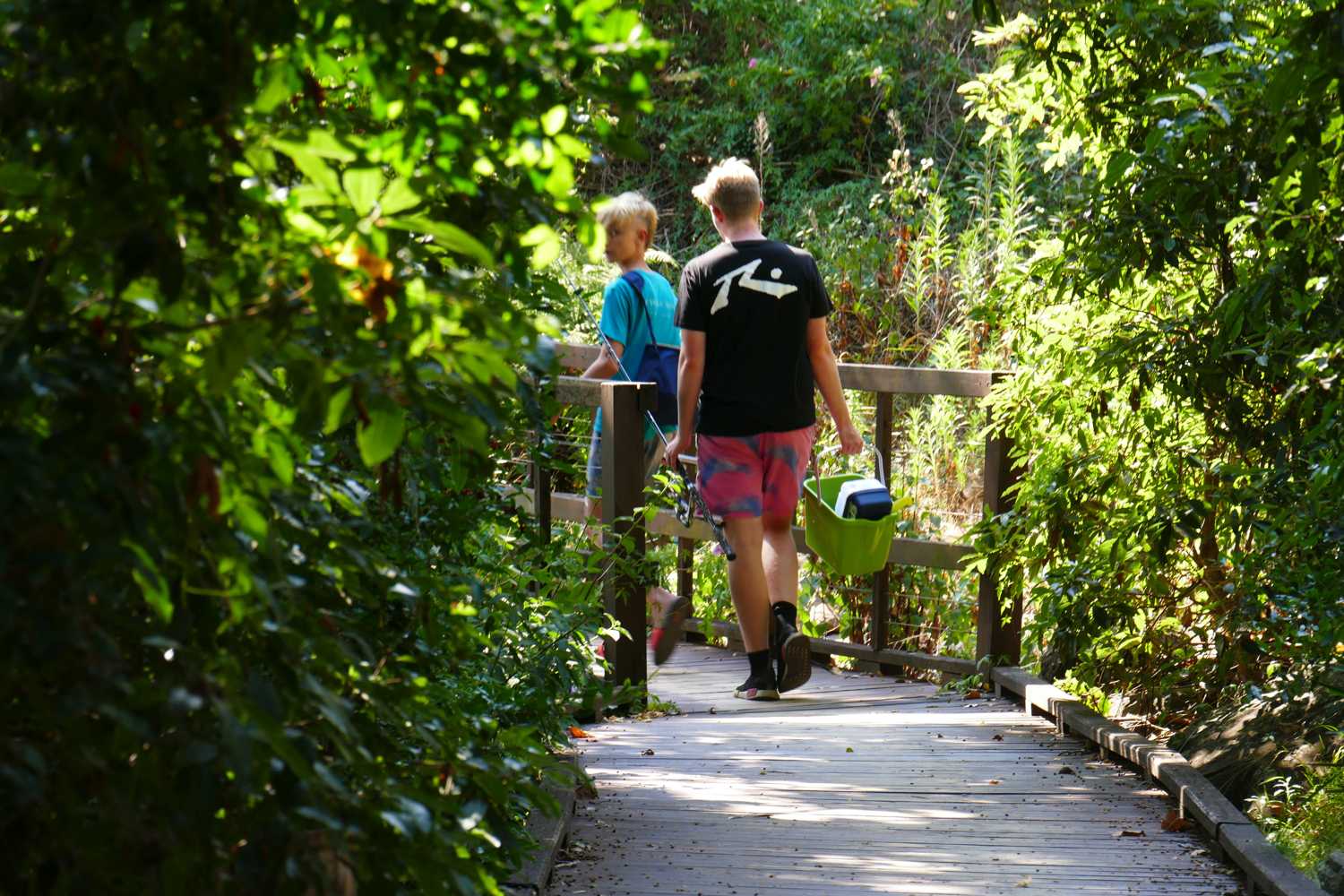 A gold leaf snagged by Caauarina needles soaks in light, of real interest to the lens. 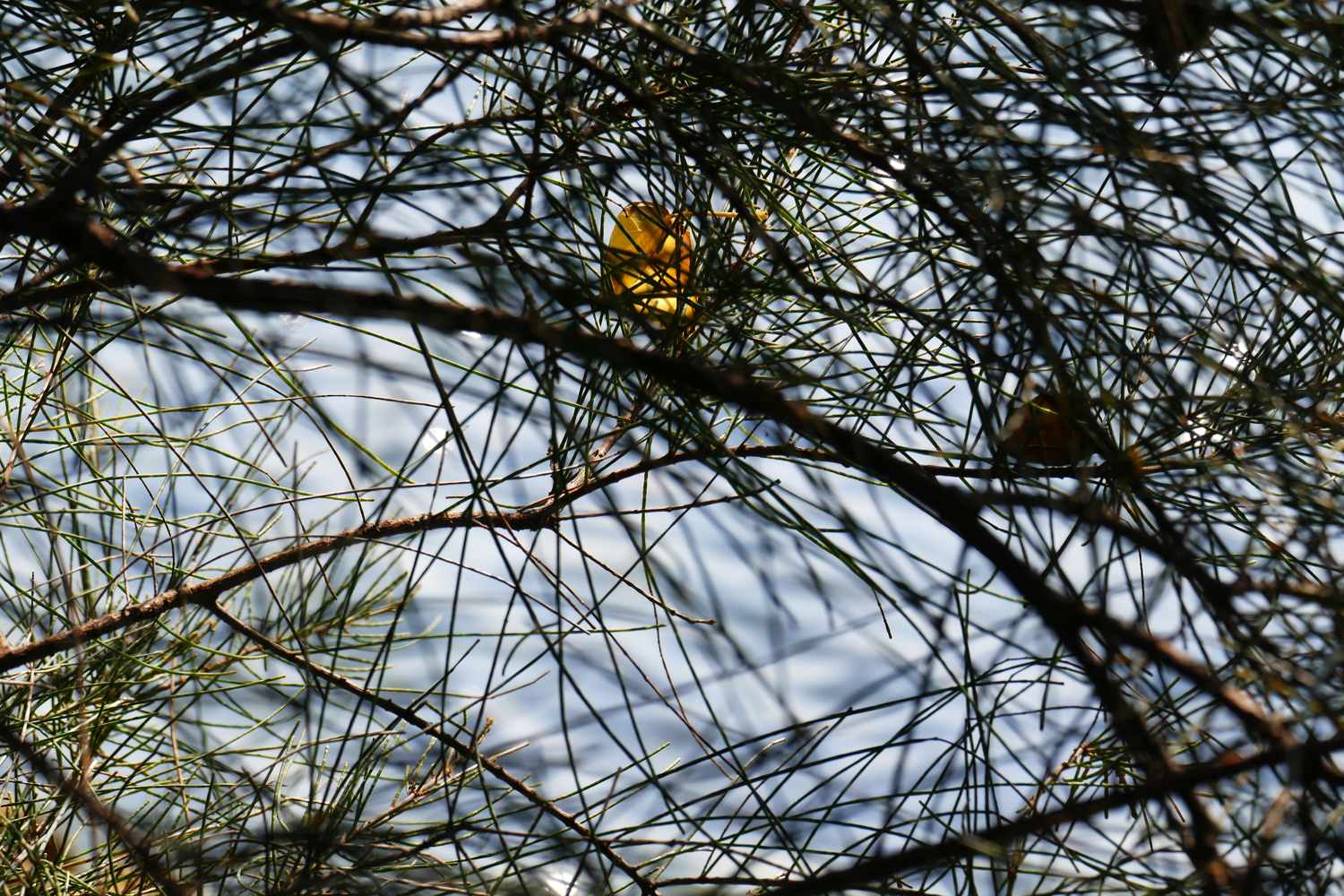 You could say that these works undertaken by geology and erosion are naturalistic. Some pieces recline like a nude, a few take the chiastic pose (resting on one leg). Can aesthetic properties take us to the story of these rocks, this environment, and more than scientific hypotheses, take us out of our habitual ways towrds keener attention, appreciation and understanding? Or is the question really that, in the midst of our tragedy (the destruction of Gaia in the form we know her), can we appreciate what remains and try and slow further losses. 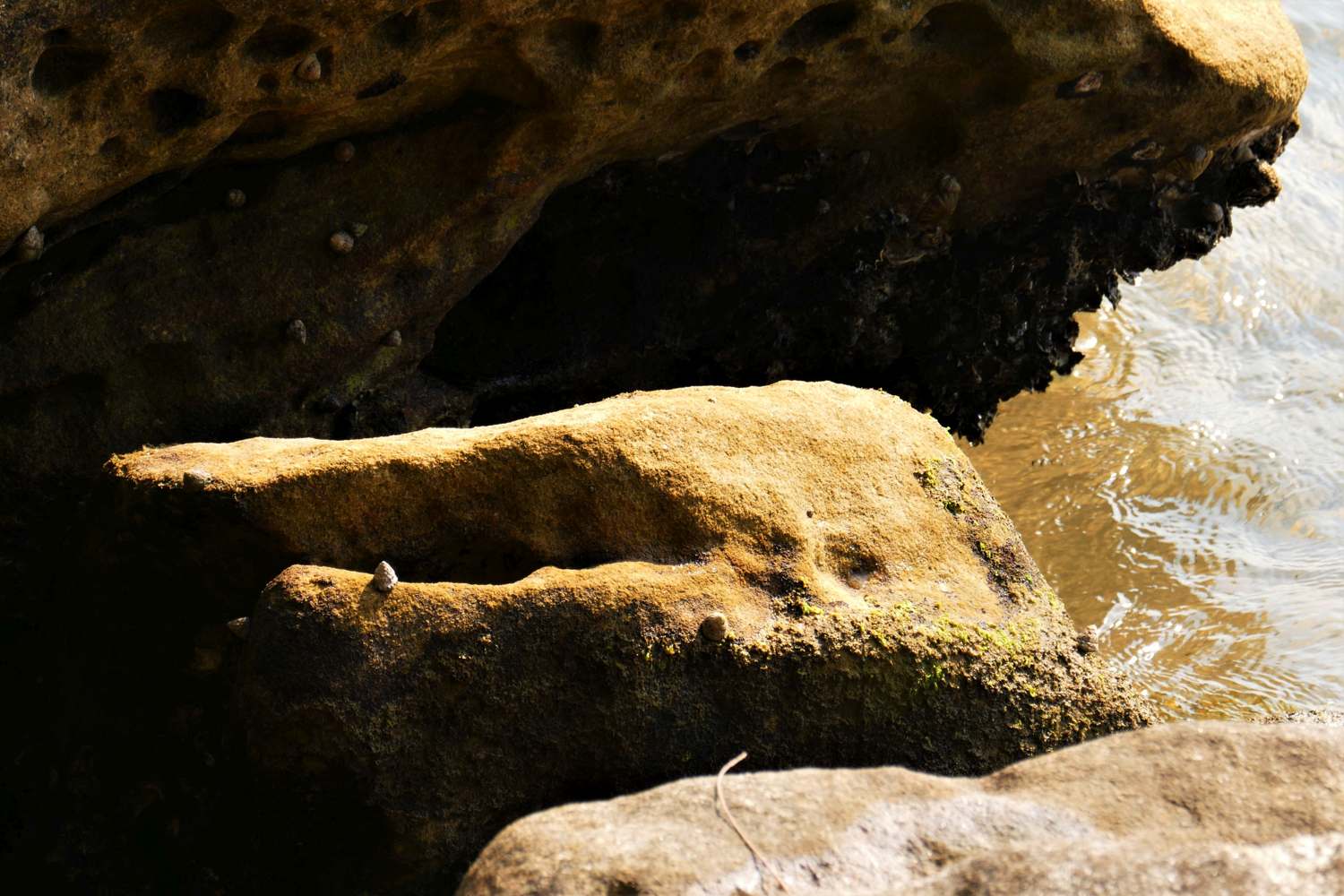 Time for some natural history: Silica is quartz is silica (silicon dioxide). Sand is silica, flint is silica, granite is mainly silica. Silica can scratch the toughest glass and being so hard survives the pummelling of time. It makes up more than 50% of the planet. 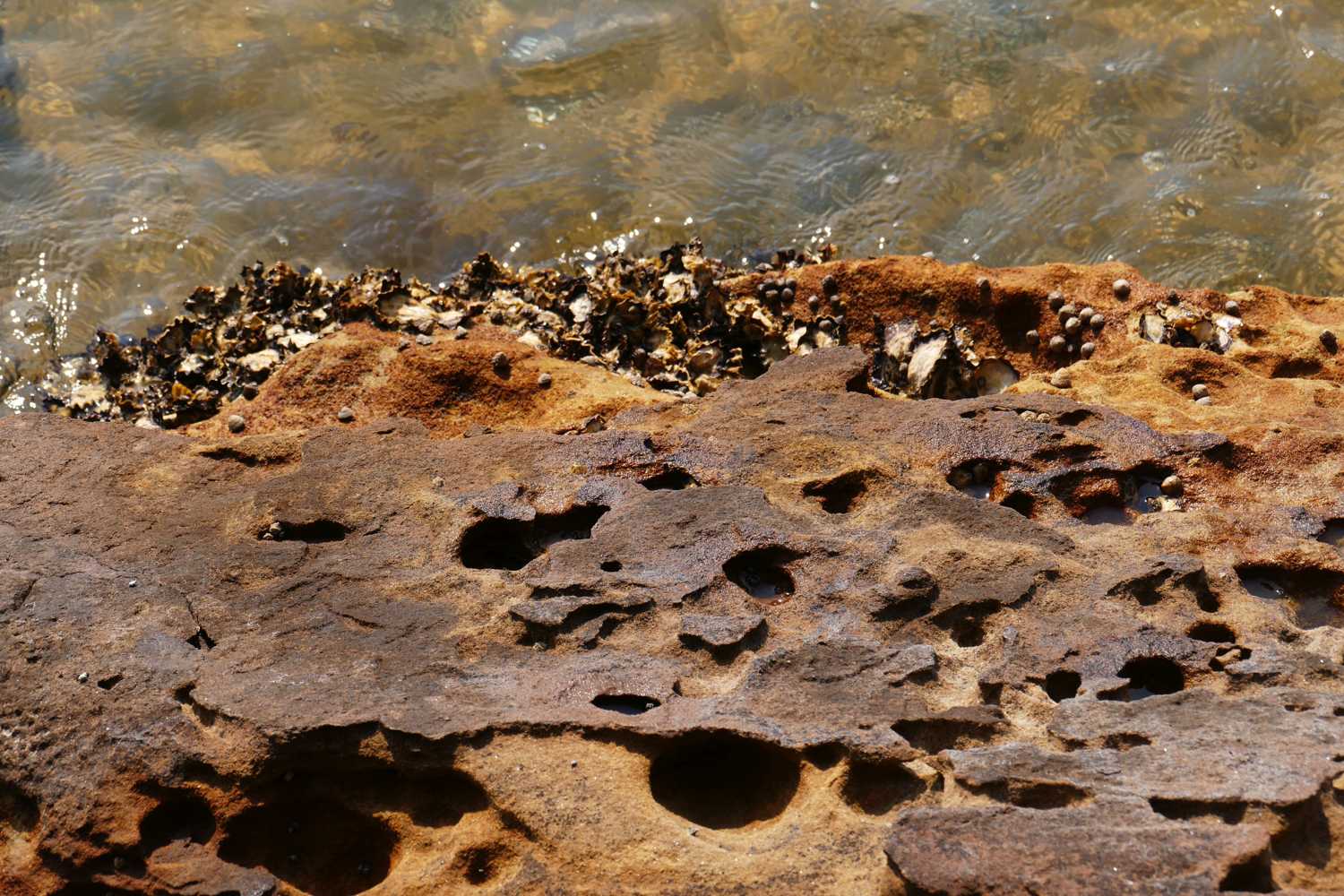 Other minerals weather down to clays and salts, or are ground to dust, or digested in acids, but quartz settles down for the long haul. Buried deep, under great pressure the grains slowly lose their rough edges and settle closer, water percolates down bringing iron oxide and may dissolve minerals that fill the interstices, tightening gaps, the bare matrix becomes sandstone. The rock then waits underground until wind and ice, sea and rain and sun tear open skin for the reveal.

The textures, shapes and colours enrich abstraction and shy from concrete history, unlike Pentelic marble (used for the Parthenon sculptures), or ghostly Carrara marble (favoured by Roman and later Italian sculptors, like Donatello and Michelangelo). Heated glass glows red, then yellow, then white, in sandstone these are the modes of iron. 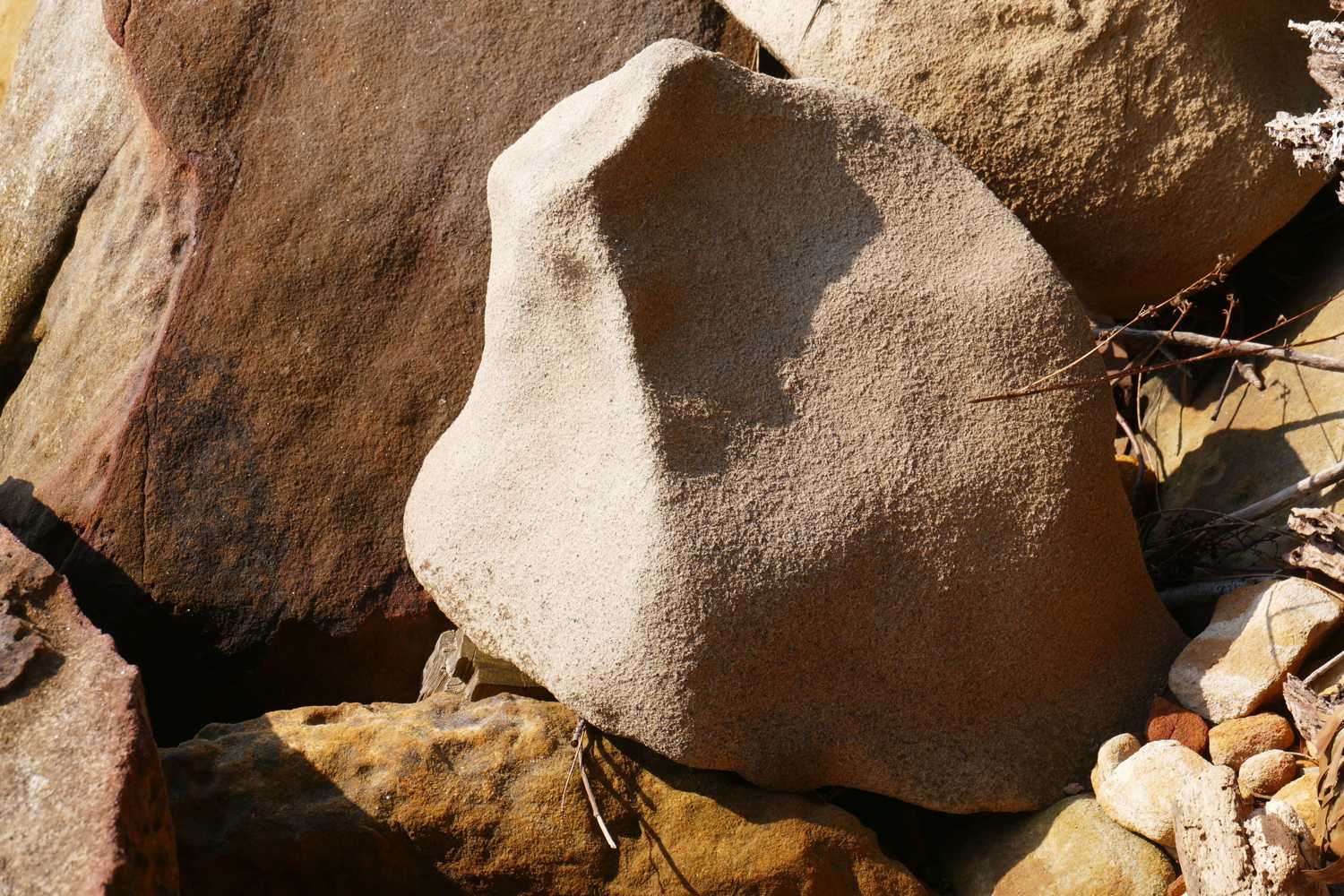 This rock is mineral wash from a river five times the Amazon’s size, laid in the shallows of a giant delta. Does this river, now running in another world, have a name? The well-washed quartz contains few organics, no fossil beds. No mass death, no limestone. Occasionally fish are found fixed by a clay lens. Dead-plant-coal is squeezed below. This beautiful indigestible flesh of Gaia sunders at the macroscopic and becomes a soil of sorts.

The glass has a hole. The glass is a bottle. An empty bottle placed by someone with some care at some time, willing to forego the fun of an explosion, an Instagram moment. 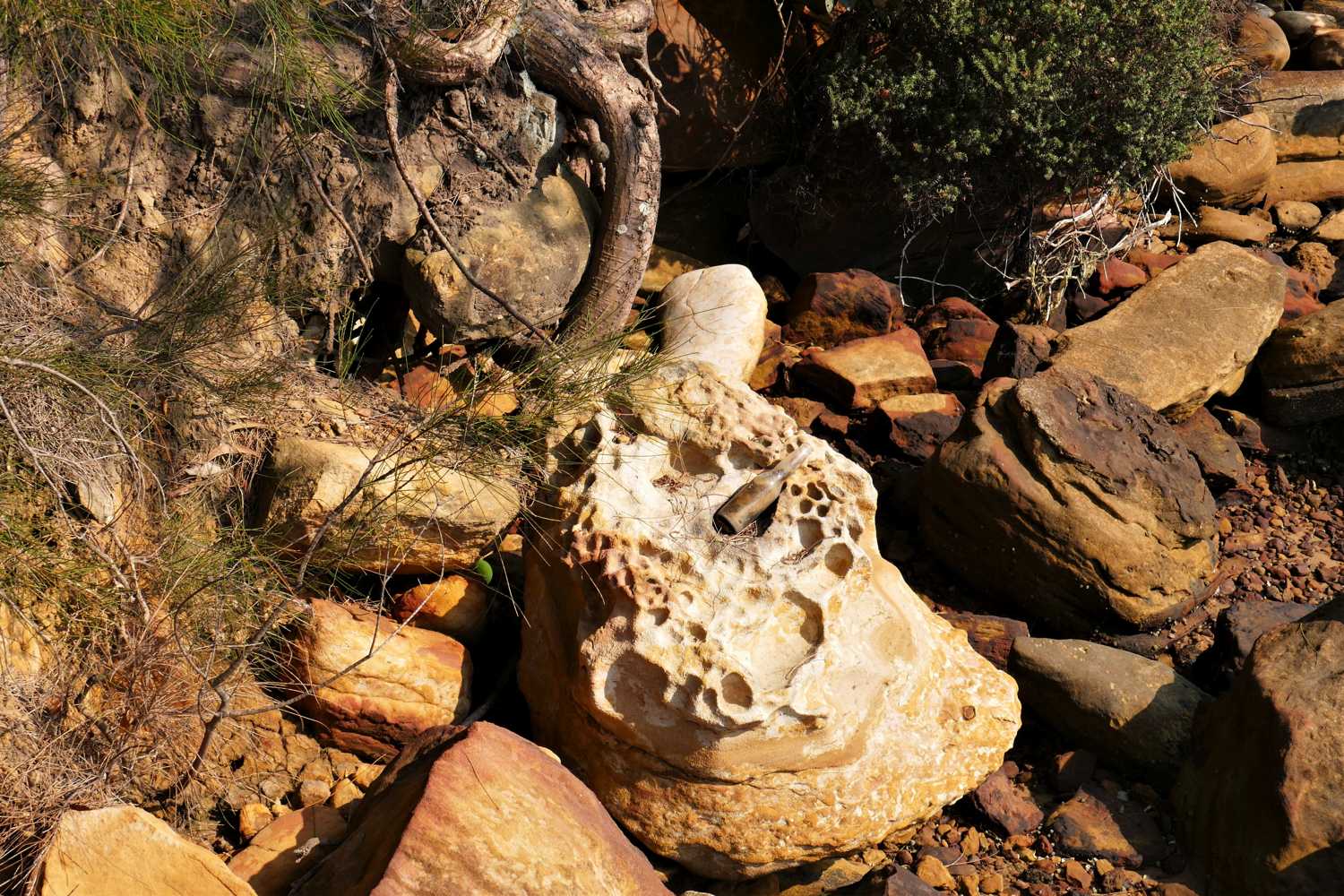 Drift wood, drift glass, drift vowels, drift elect. Near here years ago, I found a doll’s head. Both her plastic expression and my photograph lost the ability to be seen again.

The endurance, the telluric strength of stone, reminds me that a small cut on my finger (from getting a better angle) hurts.

A worn-out stone is no longer stone.

Looking east to smiling rock, the wedge is a little like a ruin, cluttered, ill-defined – an infinite series of Still Lifes. To date this crease has not been briefed by Blues & Roots, and Streeton painted on sand. 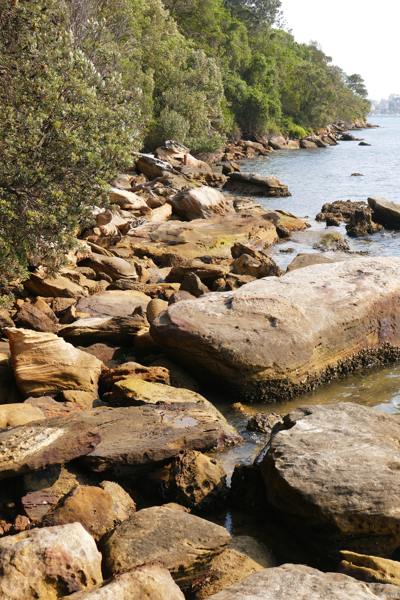 The critic Sianne Ngai has argued that three handy categories of contemporary art – zany, cute and interesting illustrate, ‘how aesthetic experience has been transformed by the hyper-commodified, information-saturated, performance-driven conditions of late capitalism.’ [3] Her new book is about how gimmickry floods the art world. ‘The gimmick is not its missing fourth category but an undercurrent running through all three — and indeed, all of capitalist culture.’ [4]

She believes the gimmick is a powerful force in contemporary art, partly because of its ‘equivocal status as capitalist commodity and the uncertain relation of artistic to value-producing labour.’ [5]

These rocks are art that stay art and much, being part of Deep Time and part of a jigsaw of a dynamic habitat, with daily exchanges.

Orpheus sang so beautifully rocks moved closer to listen. After the tragedy, his voice was so sad trees shed their leaves. A party of wild, drunk women came across him and hearing that pain stoned him to death. Explanations are not necessary, even if quite interesting. 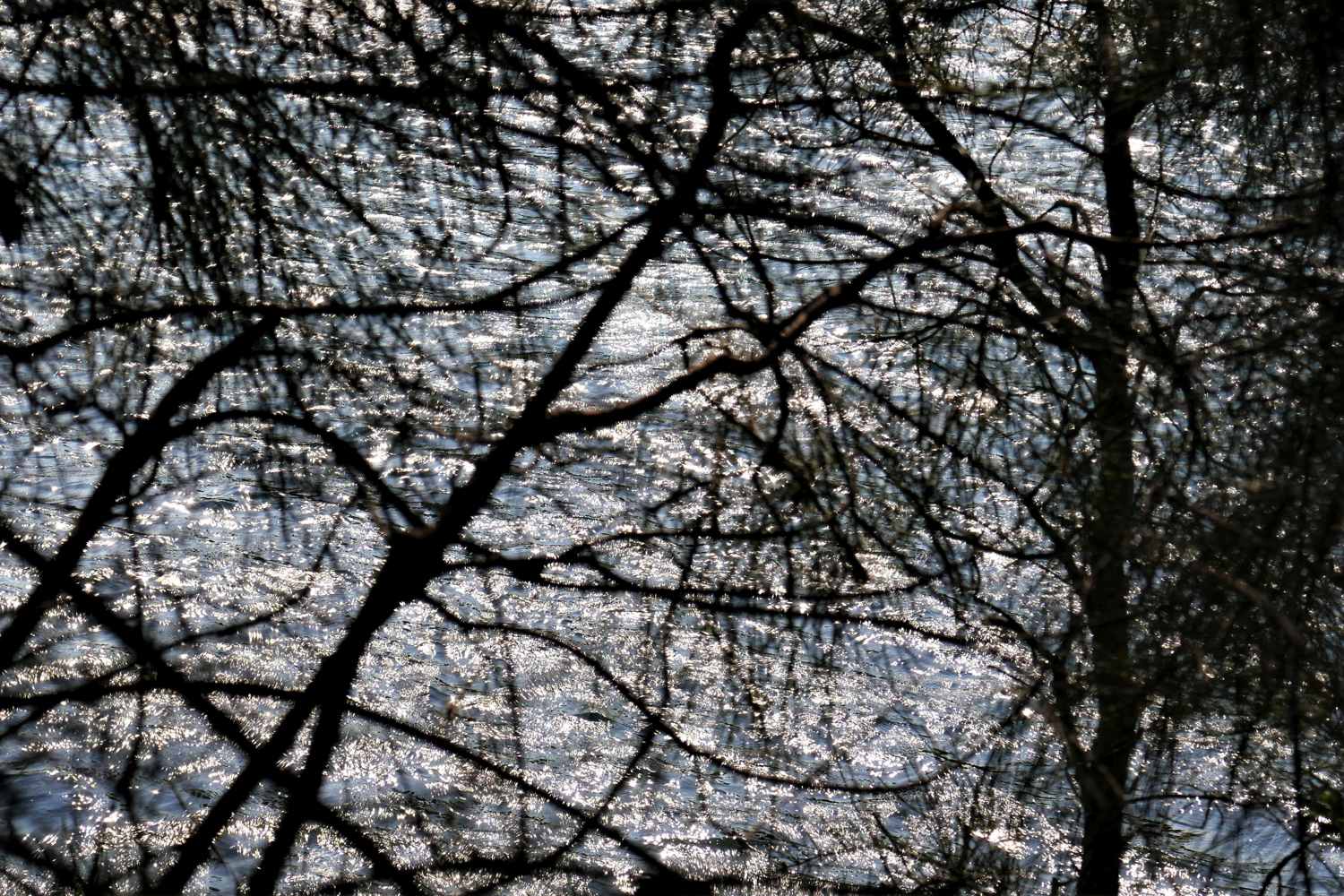 A tremulous dance floor, beguiling abstraction, infinite glissandi. The submarine mysteries, the kitchen of fishes we leave out of the conversation.

From the surface it looks like a desert. But underneath, it’s very different. It’s a marine jewel.[6] Sydney Harbour has 3,000 species of marine creatures.

A deflated sphere moulds into leathered earth, hard to see the game without a gnomon in season. You forget how flat photographs are. Tomorrow is always tomorrow – here follows now, half hemisphere at a time. 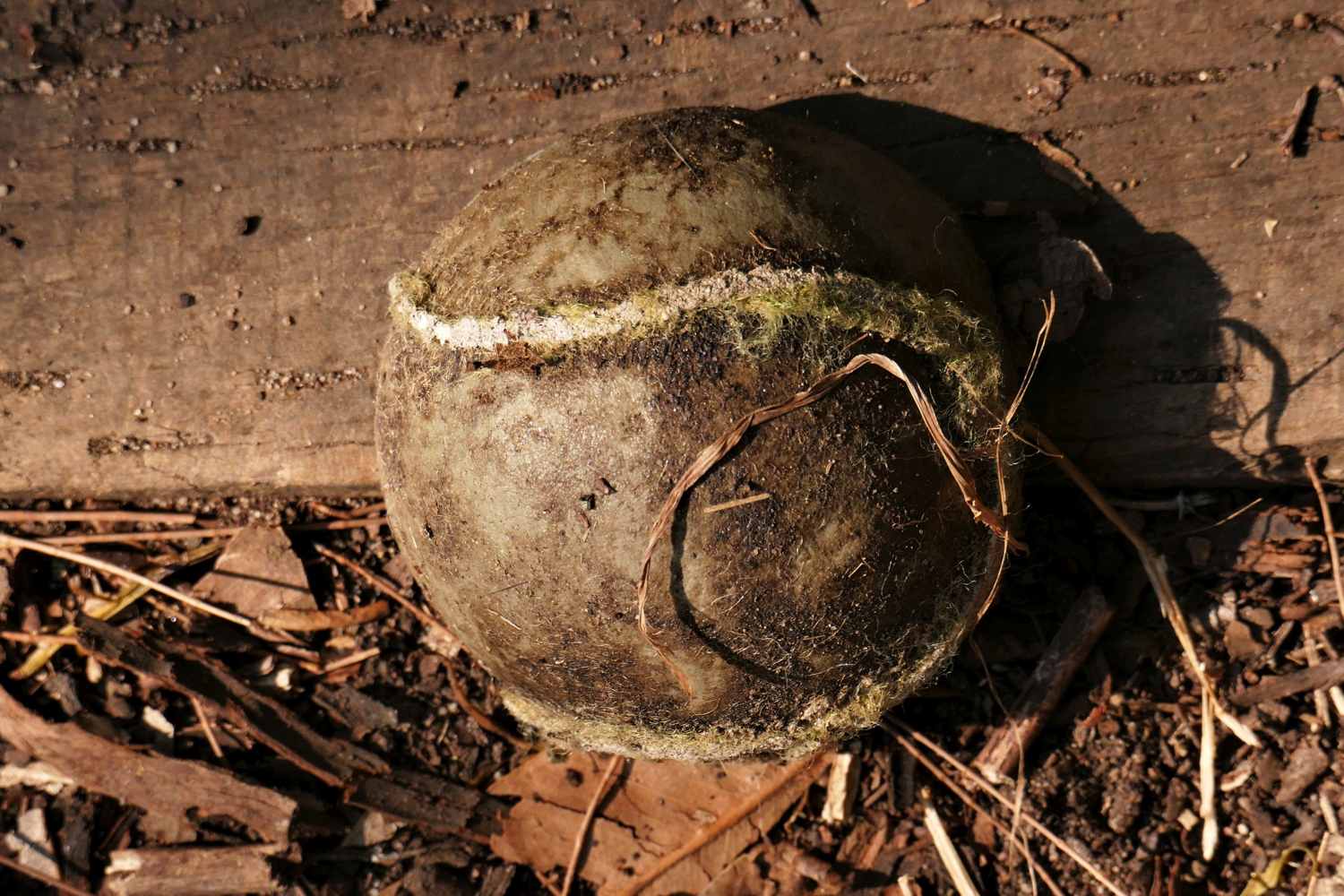 However you turn a (round) tennis ball, it does not alter the ball’s appearance. It is said to have rotational symmetry. In geometry, the tennis ball theorem states that any smooth curve on the surface of a sphere that divides the sphere into two equal-area subsets without touching or crossing itself must have at least four inflection points, points at which the curve does not consistently bend to only one side of its tangent line.[7]

My tennis days are over my right shoulder.

In 1908, Ernest Rutherford, fired radioactive alpha particles at a solid object, gold foil.  He found that most passed straight through, a few particles emerged at an angle ‘(as if they had bumped up against something) and some bounced straight back like a tennis ball hitting a wall.  Rutherford’s experiments suggested that gold foil, and matter in general, had holes in it!’[8] In 1912 Wilson invented the ‘cloud chamber’ that led to photographic ‘evidence’ of the reality of electrons and protons, backing up the predictions of Rutherford’s theory of atomic structure published a year earlier. 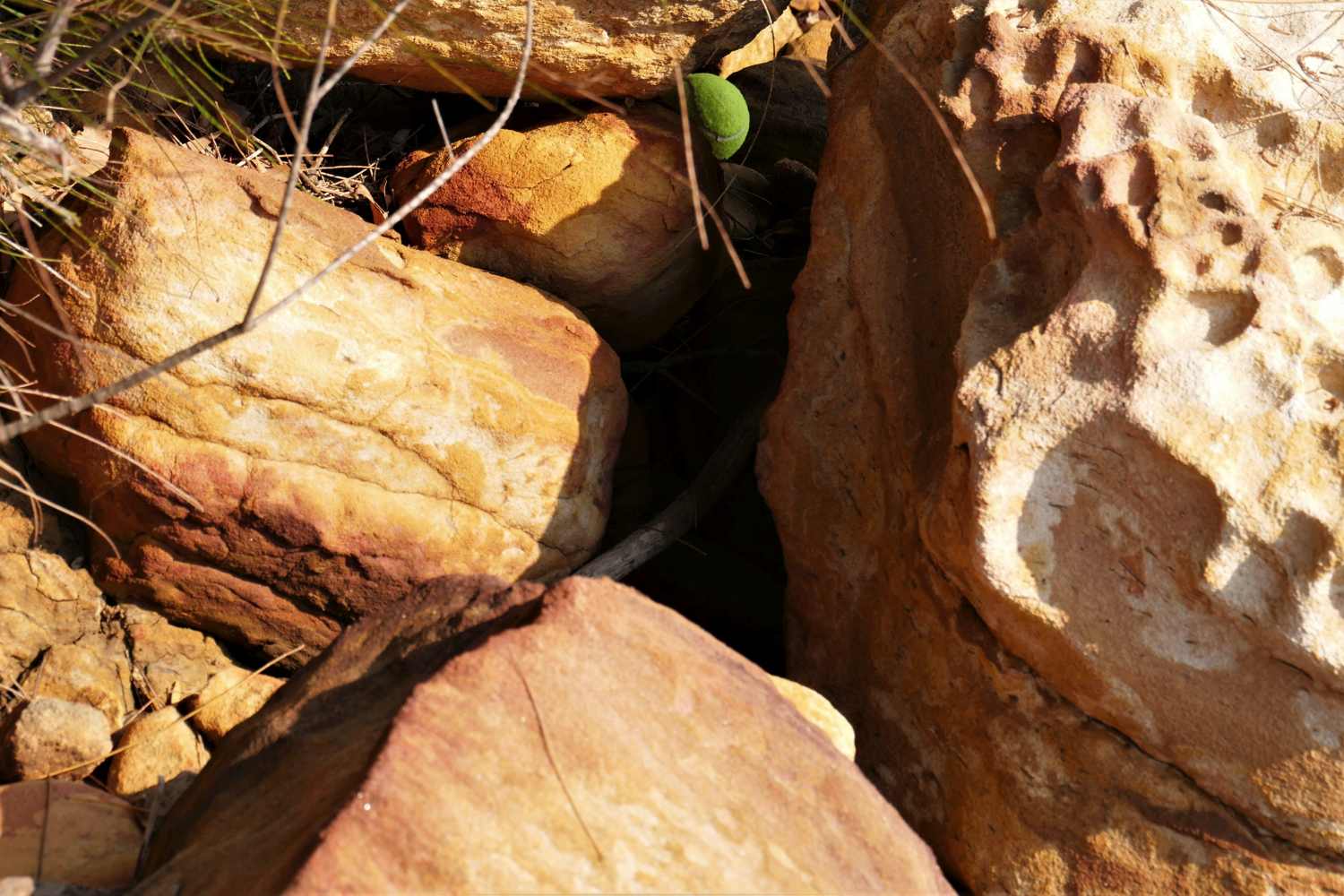 Modern tennis balls are made of a hollow rubber core, covered in a wool or nylon shell which is known as the nap. Pressurised air inside the rubber core makes the ball bounce . . . For the first Wimbledon tournament in 1902 balls were hand stitched – which meant no two balls ever bounced the same way.[9]

A young dragon looks up at me ready to jump yet at ease with the world. 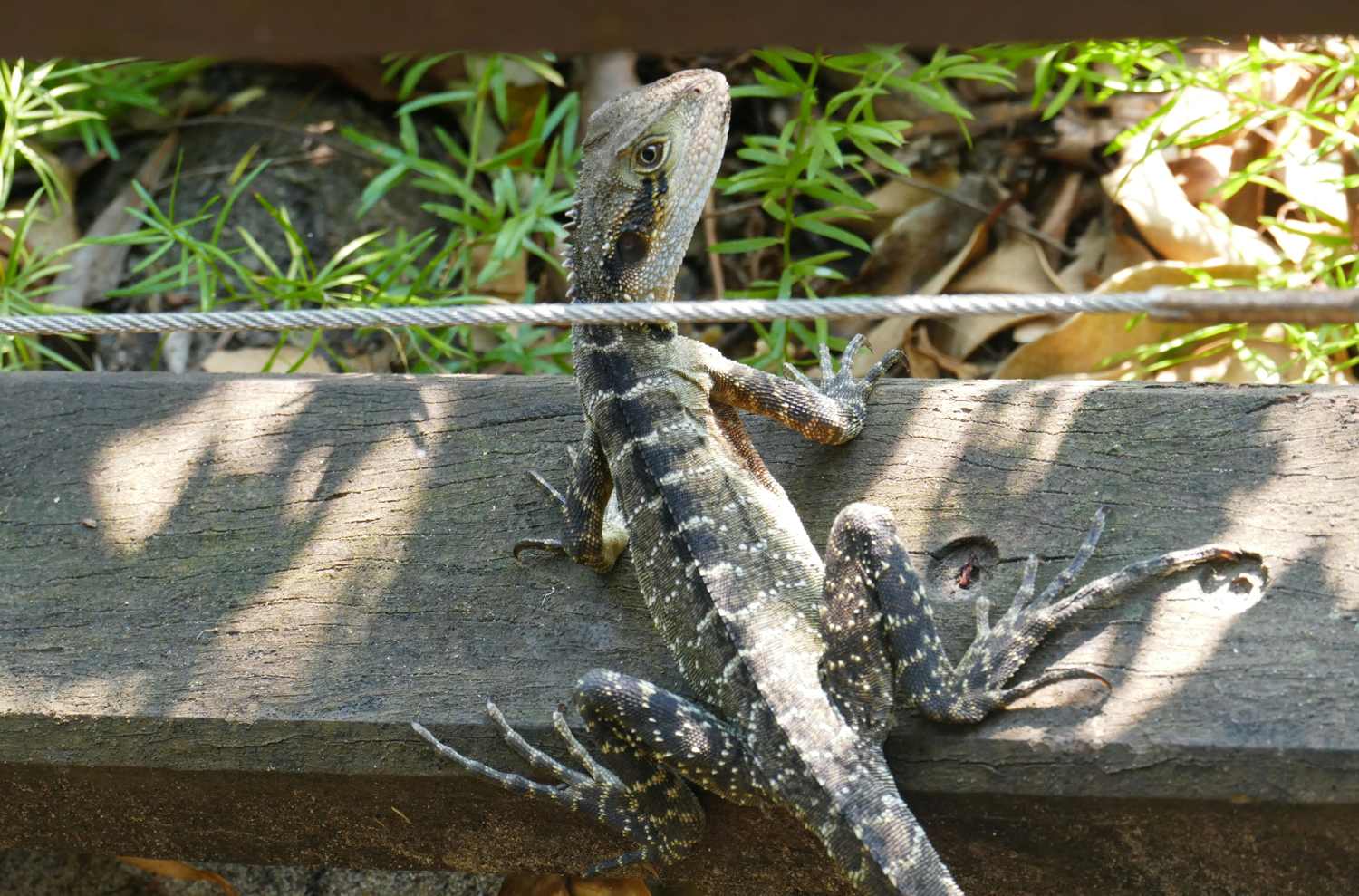 [1] Allen Carlson, The Scope of environmental aesthetics in Aesthetics and the Environment: The Appreciation of Nature, Art and Architecture, (2000) Routledge, 2005.

[2] Richard Wollheim is credited with coining the term ‘Minimalism’ in his essay ‘Minimal Art’, Arts Magazine, 1965. 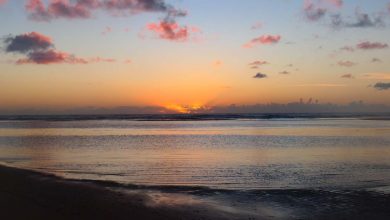 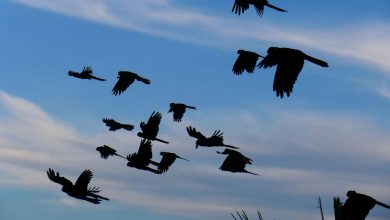 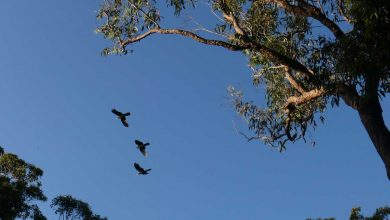