Researchers have discovered why the tropics and a handful of other areas across the globe have become the most biodiverse places on the planet. https://www.sciencedaily.com/ 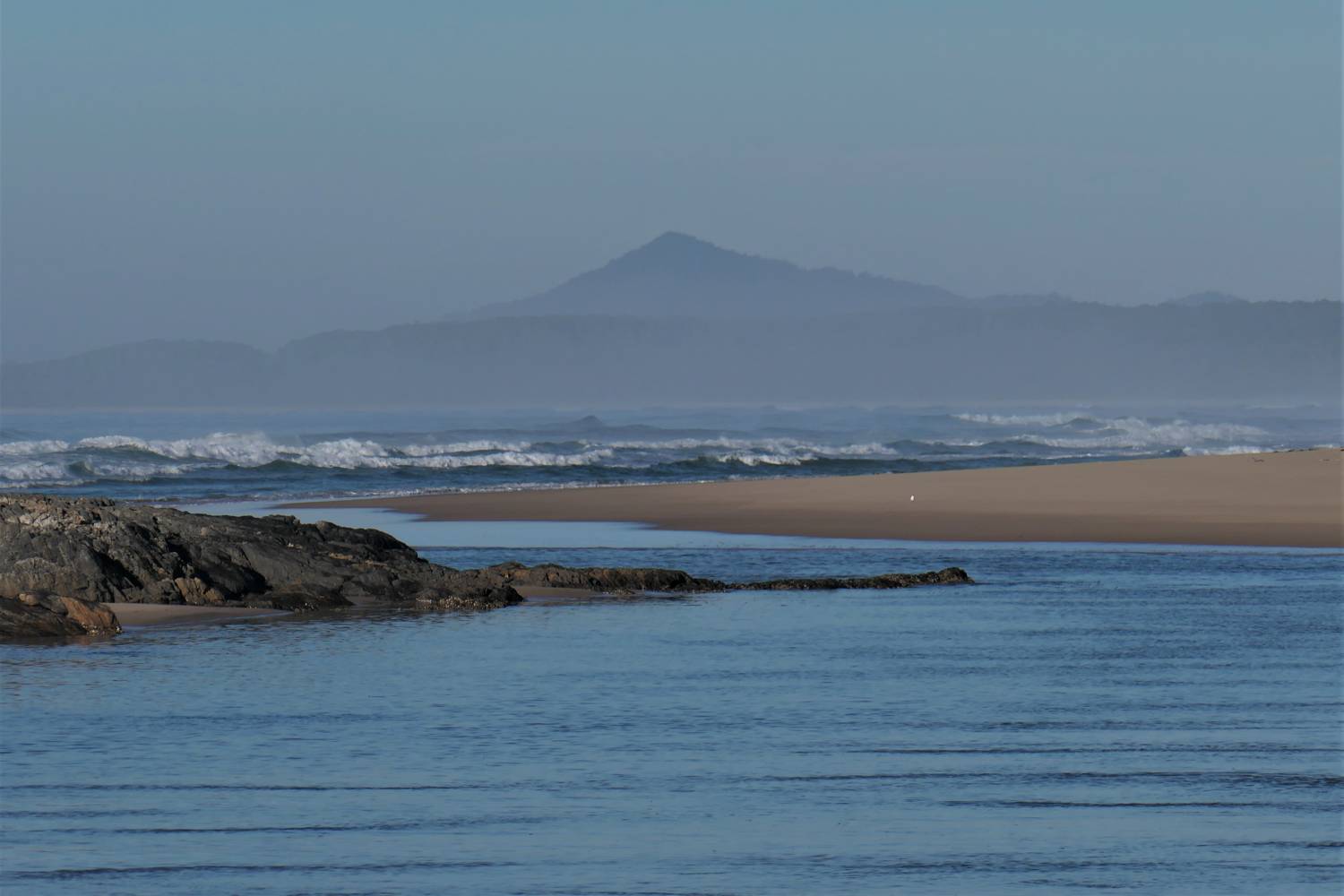 I take a portrait of Nuungu Mirral partially embedded
in its reflection, Bongil Creek winds past sleeping birds
up to the mountains where space must be singing. 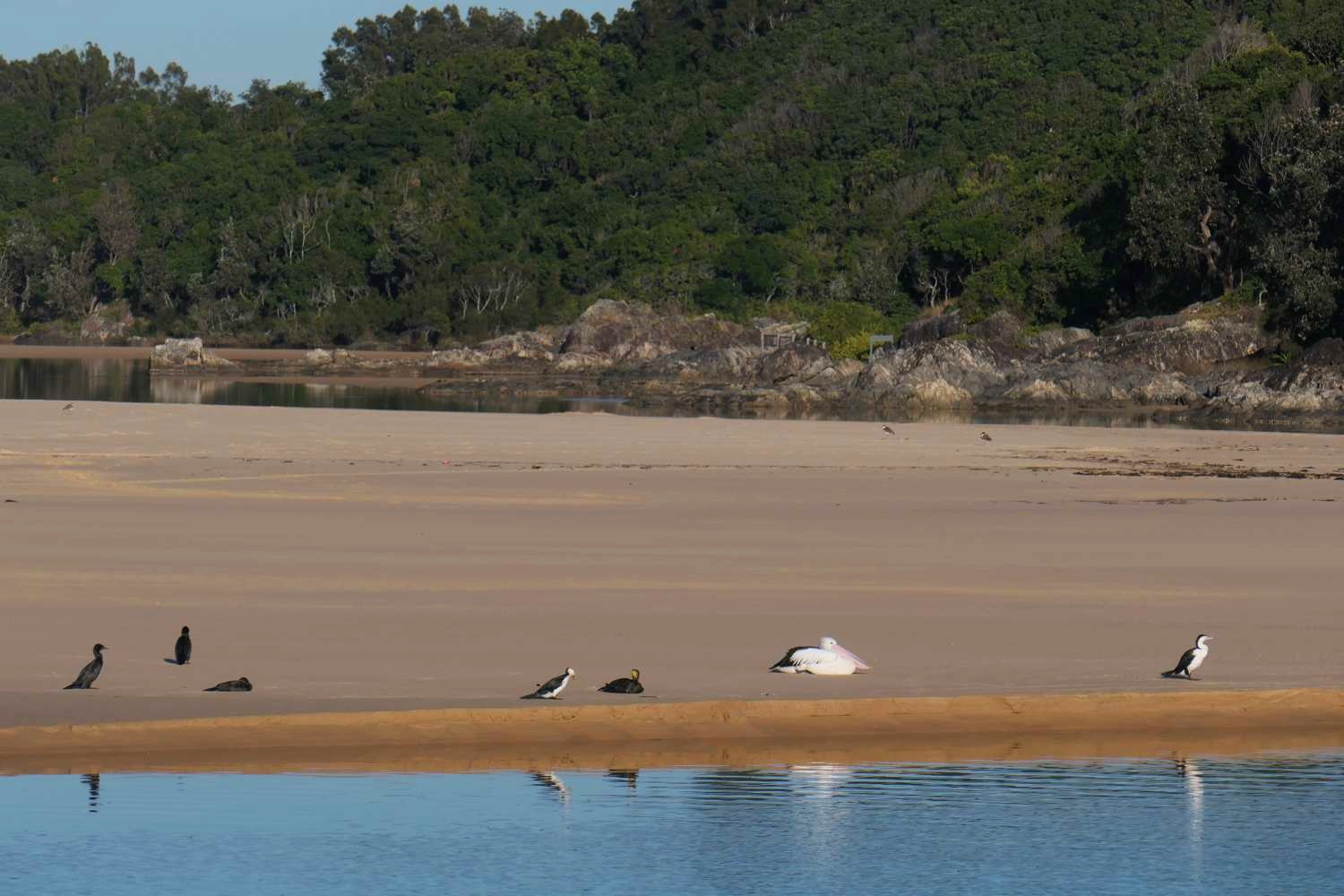 A flock of Galahs are painting over the gesso, the gods
have applied a blue ground, one perfect for our eyes
blind to infra-red and ultra-violet, a radiation of shorter
wavelengths winnowed by our balloon of water, nitrogen,
oxygen, carbon dioxide, argon and dust, but not
‘sky blue’, this is a richer hue. Perhaps we are creating
a different coloured sky (when visible through smog).

Not a whale to be seen from the lookout, but I photograph
surfers with Nuungu Mirral as the back drop. It is my Mt Victoire. 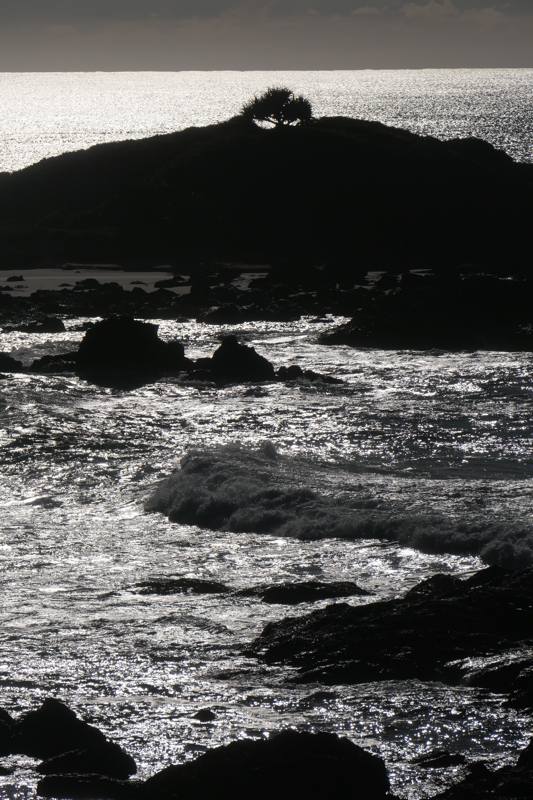 Into the sun finds pure monochrome.

Heading down the main street of Coffs, a pair of Black Cockatoos
rowing lackadaisically, relaxed. A Satin Bowerbird is tidying
his bower in the Botanic Gardens when a Brush Turkey,
ten times his size, wanders onto the cleared display ground. 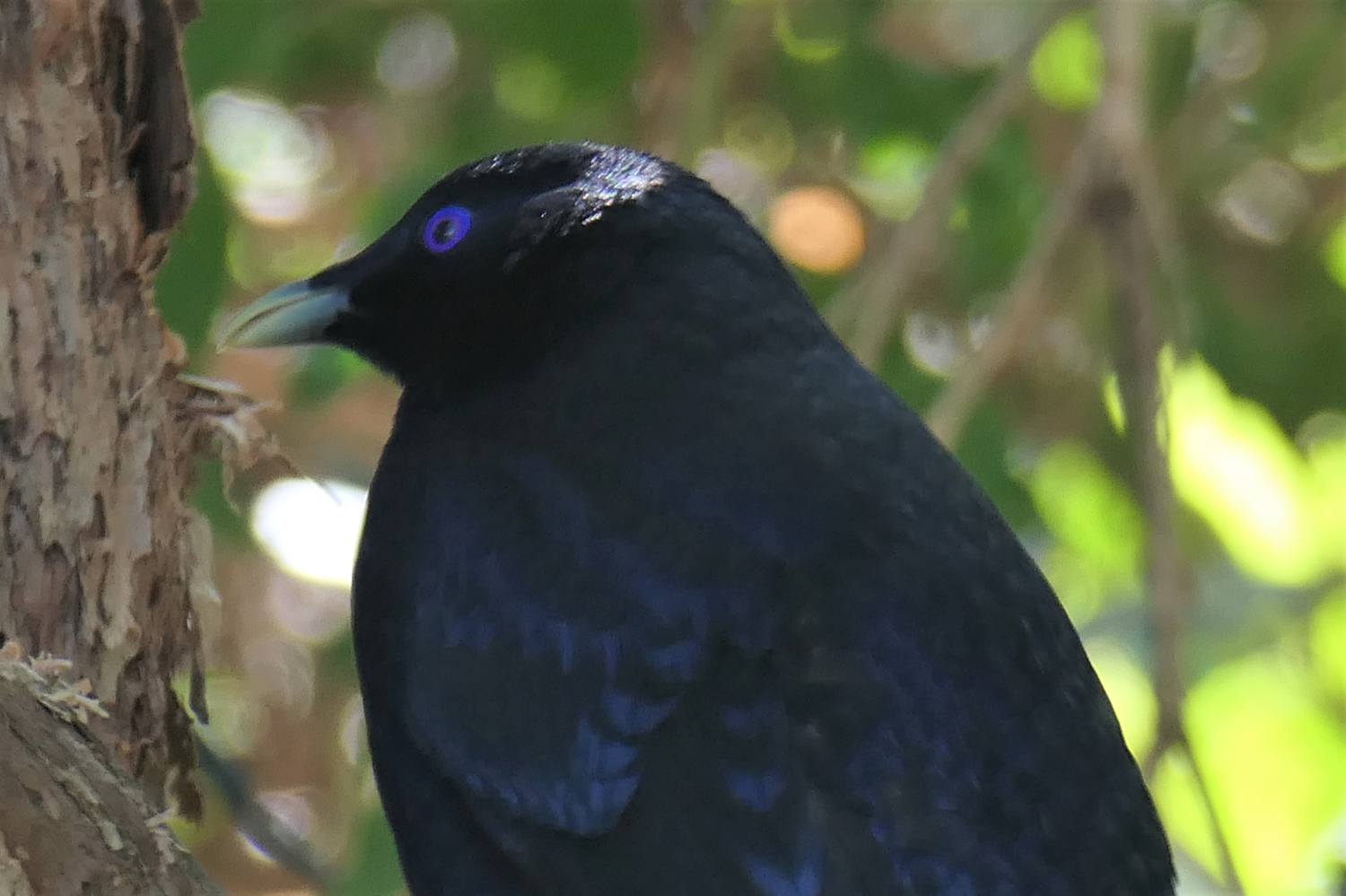 The Bowerbird stands his ground, makes no sound, the turkey
wanders off to me. Close by more weird bowerbird calls,
this time a young male, still dressed in female plumage,
is trying out some nifty dance moves while picking up then
dropping a white petal – the repetitive mechanics of courtship.

We keep eyes peeled for the Koala seen here two days ago.
Catbirds are taking turns bathing in a pool, one ducks
as a cheeky Eastern Yellow Robin swoops close by
and then sticks to the side of a tree like Velcro.

Driving back, just metres overhead going the other way
a Whistling Kite, muscles throwing off the air, a glorious energy.
Bennett’s Wallaby and Glider couple death on the verge.

In the early 1880s, Cezanne made his first painting of Mont Sainte-Victoire. In 1901, he bought land on a hill north of Aix, built a studio with a large north-facing window and with clear views across to the mountain. Accommodation on the ground floor gave way to a storeroom for canvasses, he still lived in an apartment in the city and walked a mile up the hill every morning. He lived a life devoted to art often walking further up the hill to the summit for the best view of a mountain he painted more than 60 times in the last thirty years of his life. He’d start sometimes at dawn, return to Aix for lunch, then go back to paint until 5.30pm either in the studio or outside.

In an early essay ‘Cezanne’s Doubt’, the French philosopher Merleau-Ponty suggests that the true artist does not want to repaint the past but be original – take everything in, then create something entirely new. The “meaning” of what the artist creates does not exist beforehand. Merleau-Ponty believed that the expressive act emerges out of the artist’s environment and not confined to physical application of paint. It, ‘cannot be divided into a seeing of the world and a subsequent painting of a representation of what is seen. Through the act of painting something is done to the world. . . The landscape thinks itself in me, and I am its consciousness.’ [2]

Martin Jay explains Cezanne’s process this way: ‘His attempt to return to objects and paint ‘nature’ was not, however, a restoration of earlier representational realism; instead, it sought the real entirely on the surface of the canvas, where subject and object, perception and the perceived, were not yet distinct and separate.’ [3]

What is irreplaceable in the work of art? . . . The fact that it contains, better than ideas, matrices of ideas – the fact that it provides us with symbols whose meaning we never stop developing. Precisely because it dwells and makes us dwell in a world we do not have the key to, the work of art teaches us to see and ultimately gives us something to think about as no analytical work can. . . . Maurice Merleau-Ponty[4]

The economics of food production use large scale, industrial monocultures. We now expect cheap food. Berry warns: ‘Don’t try to farm if you don’t know how, if you can’t find the teachers you need, if you can’t afford loss of income. I’ve had letters coming from people: ‘I’m going to quit my job and move to the country and farm.” And what do you say that’s responsible? Oh, by all means? No. You have to say, ‘Don’t do it’.’ [5]

WB: Well, here we are, wasting time. What are we doing here? Why aren’t we out somewhere else doing something else? Why are we just sitting here talking?

TD: Because we don’t know what to do. That’s what I’m trying to say. It’s really complicated to live in love, at this time.

WB: We do know what to do. We need to take care of the responsibilities that we’ve got.

An email to various banks:

This is a period of exceptional uncertainty, but one thing that is certain is that the world cannot continue the way it was. A strategic way forward, for the health of the economy, of the workforce, the mental and physical wellbeing of Australians, and the health of our degraded environment is to abandon fossil fuels and start to think creatively about our future. This means ending any further financial support for the Adani Abbot Point Terminal and any projects associated with the polluting Carmichael coal project.

All the very best to you and your decision making, Dr John Bennett

Despite damning findings from Professor Samuel’s Interim Review of Australia’s nature laws, the Morrison Government will rebadge its ‘one stop shop’ and rush through new laws to shift national environmental accountability to state governments. [6]

We have just noticed the carrots are missing too.

[1] ‘Our iconic Great Barrier Reef depends on a rapid shift from polluting coal to clean energy. If we keep up the pressure, we can stop Adani getting the finance they desperately need. Use our online tool to email Adani’s remaining potential financial supporters and urge them to not fund this dangerous coal port.’ Newsletter, 3 August

[5] Tim DeChristopher and Wendell Berry, ‘To Live and Love with a Dying World’, Orion 2019

To Live and Love with a Dying World