What a disaster these fires are! Ancient rainforests that have never burnt, haveburnt. Perhaps a billion animals dead, and a number of people. The Government at State and Federal level have been so slow to react. We were close to fires before Christmas and we know people who lost their homes, but the worst of them happened down south. Over 70 nationally threatened species have had at least 50% of their range burnt, while nearly 160 threatened species have had more than 20% burnt. More

Have more than a billion animals perished nationwide this bushfire season? RMIT ABC Fact Check say this is a conservative estimate. See the ABC.

In the midst of this disaster, the President of the North Coast Environment Council, Jim Morrison reports, and I quote, ‘even as helicopters and water bearing planes desperately tried to control a fire in conservation rich valleys of the Mid North Coast fringed by houses, logging machines were clear felling the adjacent habitat less than 500 metres away.’

There is a huge need to protect unburnt areas of habitat. State Forests in this region have become refuges for wildlife and are now an important reservoir of Koala genetics on the East Coast. The Australian Forest Products Association have already asked MPs for access to National Parks for salvage. ANU Environment professor David Lindenmayer warns that logging after fire harms flora and fauna by removing rare tree hollow habitat, damages the soil from trucks and machinery, and pollutes waterways.

One piece of bright local news from the fires, the Upper Kalang is not going to be logged. It’s been a long battle with lots of protests  in the face of proposed logging – demonstrations, concerts, letters written and a camp guarding the old growth forest. 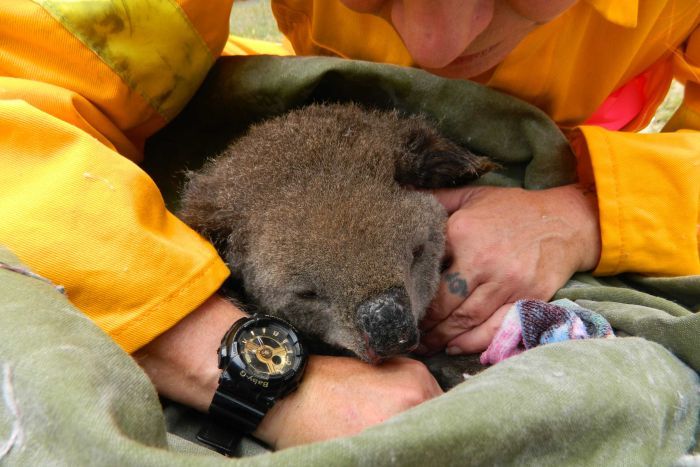 I am chairing a working group of our village community association organising a Koala Action Day (KAD) on May 2 with Nambucca Valley Council to plant a food tree garden, hand out food trees to landowners and educate the public. We are borrowing a koala sniffer dog, running workshops and a poetry competition. Given the devastation inflicted on the koala population (and of course all the other species), this region may have an important healthy population.

To get some perspective, this is Gumbaynggirr country and the name of the animal is dunggirr. Port Macquarie was settled as a penal settlement in 1821. In 1884 Nambucca got its first hotel and school. The European history of the mid-north coast is so very recent, yet increasingly damaging for wildlife. Koala numbers in northern NSW and Queensland were already in decline by over 40 per cent between 1990 and 2016, mainly because of habitat loss. The proposed Great Koala National Park (GKNP) is a wonderful idea.

[But last night (Jan 30) at Council we failed to get a motion through that they support the GKNP, and  I presented a petition to council calling for an immediate moratorium on logging until an assessment is made of the damage to Koalas and their habit from the bushfires.  I spoke to the motion, but it didn’t get through on the mayor’s casting vote.

Port Macquarie Koala Hospital via Go Fund wanted to raise $25,000 during the bushfires. To date they have over 7 and a half million dollars. Koalas matter to people and if you save the iconic koalas you also save habitat supporting many other endangered species, fauna and flora.