Swallows weave a magic over Wyn standing for me, reluctantly. We walk along the narrows, splashing up to our knees. I am so lucky to share this time and place with Wyn, both healthy and happy. This is personal. (from April 26) 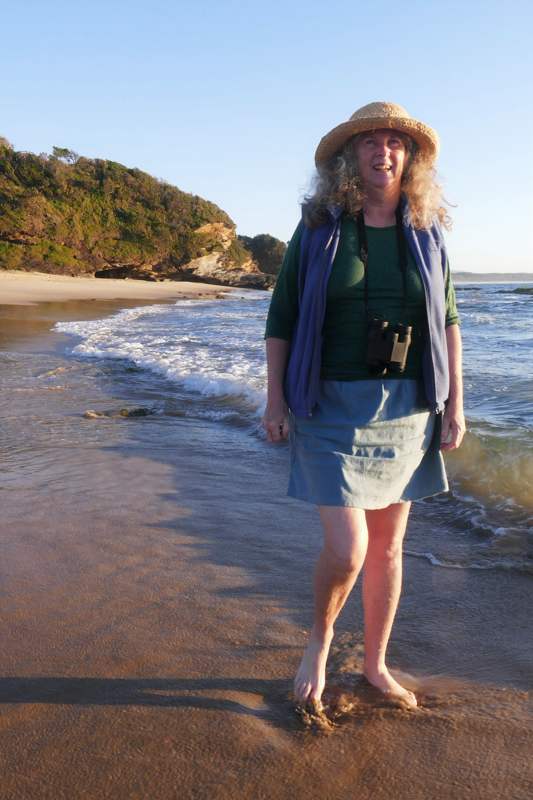 Wyn doesn’t like her photograph being taken. She’s past 60, but then she never really did, neither do I. Her feet are stirring liquid earth, her smile leaps above me and south towards the river.

It is no accident that the portrait was the focal point of early photography. The cult of remembrance of loved ones, absent or dead, offers a last refuge for the cult value of the picture. For the last time the aura emanates from the early photographs in the fleeting expression of a human face. This is what constitutes their melancholy, incomparable beauty. Walter Benjamin[1]

Susan Sontag also wrote, ‘Photography is an elegiac art, a twilight art. Most subjects photographed are, just by virtue of being photographed, touched by pathos.’[2] And this is true of older photographs but not instant images, not those ‘tending’ on social media/

My sense of melancholy has nothing to do with the politics of capitalism the mobilisation of modernism or any form of mysticism, it is solastagia, and living in an area of such a rich natural values. Living here, swimming and walking on the sea’s edge is made more special by my childhood memories of walking gingerly over pebbles to paddle on the edge of the cold grey chop of the English Channel.

The photograph is in one sense a popular extension of the portrait, for recognition and for record. But in a period of great mobility, with new separations of family and with internal and external migrations, it became more centrally necessary as a form of maintaining, over distance and through time, certain personal connections. Raymond Williams (1974).[3] I think that time has passed. We are flooded by a sea of images, through advertising, the web TV and Instagram, which allows a comment but does not provide for textual context and interpretation.[4] Connections have become fluid and ephemeral. 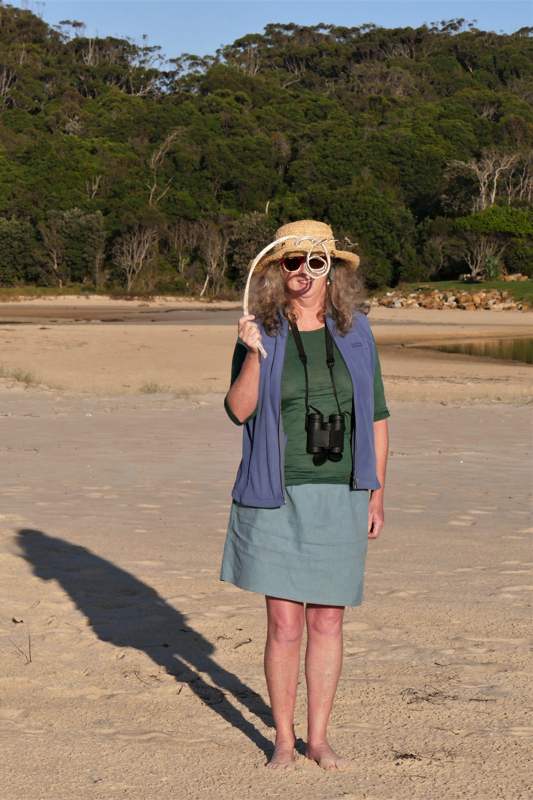 She has picked up a bone, a piece of forest brown kelp, dried to contorted and bleached. She uses these in some of her art works, both 2D and 3D. I had to simply say, up a bit, down a bit.

Instagram may be an oasis, but as a collective creative project its size is staggering, almost beyond comprehension. In the past year, 30 billion photographs were uploaded. Eighty million go up every day. (2016)[5] Now I believe that figure is 100 million.

This is technology, writing, photography, the internet and technology develops by chance, marketing, opportunity and interactions with other technologies and cultural, economic  formations. In the late 1880s an improved phonograph went on sale using wax cylinders and were marketed to businesses, not for entertainment.

A philosopher as radical as Rorty is in his attack on formal philosophy and the referential view of language, when it comes to metaphor reveals an essentialist-representationalist-literalist backbone. He writes, ‘tossing a metaphor into a conversation is like suddenly breaking off the conversation long enough to make a face, or . . . displaying [a photograph] . . . or slapping your interlocutor’s face, or kissing him. All of these are ways of producing effects on your interlocutor or your reader, but not ways of conveying a message.’ [6] In fact we communicate through metaphor (which lies at the heart of language), imagery, emotion, through artifice and artifact.

A head and a hat, backdrop of pagan trees
lovely limbs, my love is too far
for my voice to carry a poem. 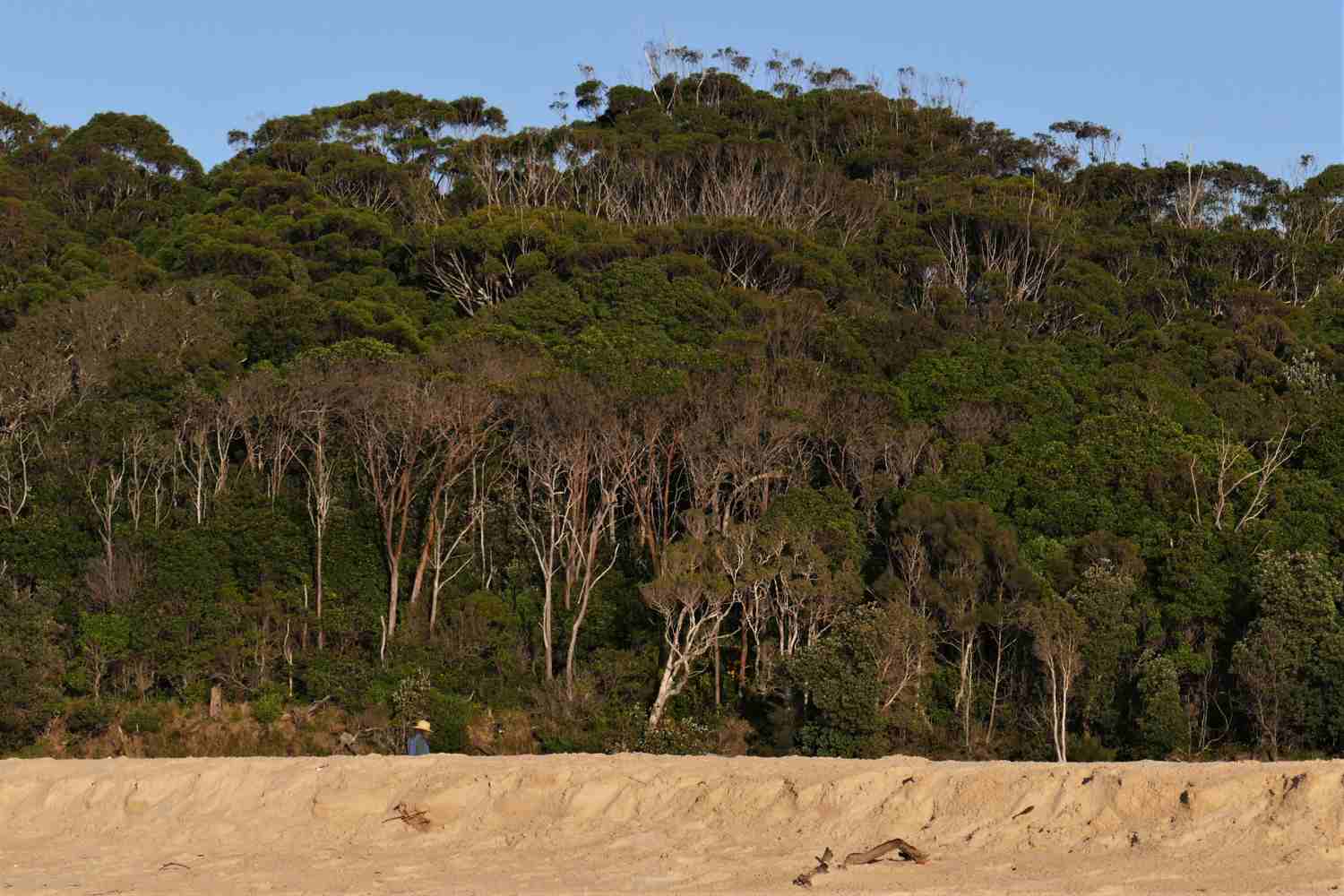 Here Wyn is incorporated into a backdrop of habitats she has come to love. She grew up beside the Royal National Park in Sydney’s southern outskirts, was used to golden sandstone cliffs and rich heath lands. Now we are 500 Ks north. Light is gripping the architecture of Valla Nature Reserve, the light so clean. And not because of the lockdown here. (Have you seen the blue skies above Paris, LA, London and Delhi?)

Everything here is natural, nothing is natural.
So much suffering surrounding this moment,
all of it out of sight, the pain silent,
histories, relationships, laughter ebbing away
and all I can do today is celebrate life.

Bourdieu says the difference between a snapshot and art is extreme, but I think that underestimates what any photograph can document and give.[7] He wrote this in 1965, since when photography as been welcomed into the arms of fine art (Andreas Gursky’s, ‘7. 99 Cent II Diptychon’, 2001a chromogenic colour print was sold at Sothebys in 2007 for US$3,346,456). And snapshots have been exhibited in the major US art galleries.[8]

Rosalind Krauss compares two landscapes, a 19th C photograph and a lithograph of the same scene. She argues the lithograph, needs to be topologically and geographically correct, whereas the photograph accords with aesthetics of landscape of the time.[9] I don’t think this holds water in this time of fluid viewing opportunities and fluid categories. And there is another complication.

Photographs once traced reality by virtue of their production (Barthes writes, ‘The photograph is literally an emanation of the referent’ in Camera Lucida), but digital images are fabrications.[10] Layers of algorithmic processing (without material mimetic operations) construct a digital image.[11] According to W.J. Mitchell, ‘A worldwide network of digital imaging systems is swiftly, silently constituting itself as the decentered subject’s reconfigured eye.’[12]

The claim that cyberspace liberates people from the accidents of gender, race, class, and bodily appearance is often made by advocates of electronically distributed education. But to conceal a problem is not to solve it. We have to learn to respect and encourage people as they actually exist. Albert Borgmann [13]

Yet these humble snapshots catch a memory, but we have to keep our feet on the ground and our friends and loves in touch (once this pandemic has finished.

[1] Walter Benjamin, ‘The Work of Art in the Age of Mechanical Reproduction’, in Benjamin, Illuminations, Schocken Books, 1969, p226.

[3] Raymond Williams, ‘The Technology and the Society’ (1974) in Electronic Media and Technoculture. Ed. John Thornton Caldwell, Rutgers UP, 2000, p44.

[7] Pierre Bourdieu, Photography: A Middlebrow Art, (1965), Polity Press, 1996, p5. He was a sociologist and interested that the practice of photography has ambiguous and varied legitimacy within different social groups.

[8] The Snapshot at the San Francisco Museum of Modern Art, Other Pictures at the Metropolitan Museum, and Closer to Home at the Getty Museum.

[10] ‘The currency of the great bank of nature has left the gold standard. Images in the post-photographic era can no longer be guaranteed as visual truth – or even as signifiers with stable meaning and value.’ William J. Mitchell, The Reconfigured Eye: Visual Truth in the Post-Photographic Era, Cambridge, Mass.: MIT Press, 1992, p57.

[11] According to Andrew Darley, Jean Baudrillard’s notion of the postmodern present as the age of simulacra, ‘an age in which the hyperreal – the generation of models of a real without origin or reality—replaces the real.’ (Jean Baudrillard, Simulations, New York: Semiotext(e), 1983, p2-4) derived from the rise of digital imaging and computer graphics. Andrew Darley, Visual Digital Culture: Surface Play and Spectacle in New Media Genres, New York: Routledge, 2000, p59-64.

[13] An interview/dialogue with Albert Borgmann and N. Katherine Hayles on humans and machines.  http://www.press.uchicago.edu/Misc/Chicago/borghayl.html. [DL 22.8.2001].